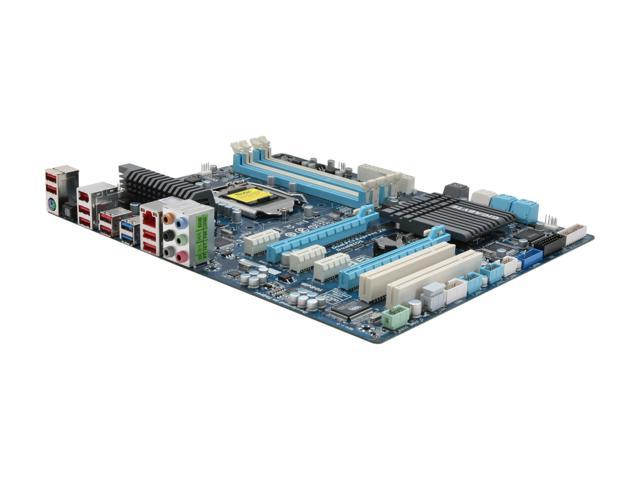 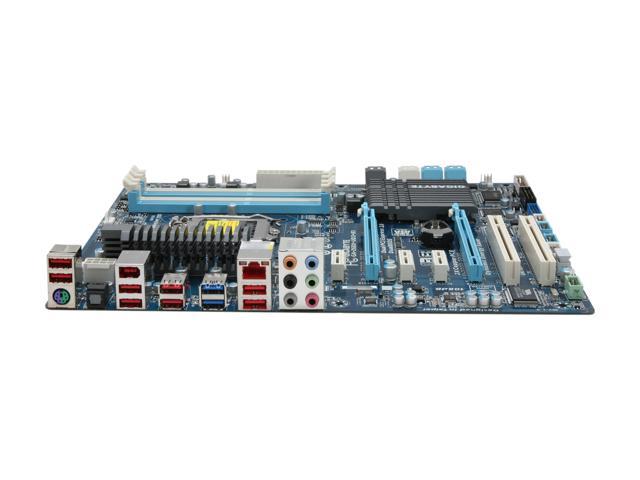 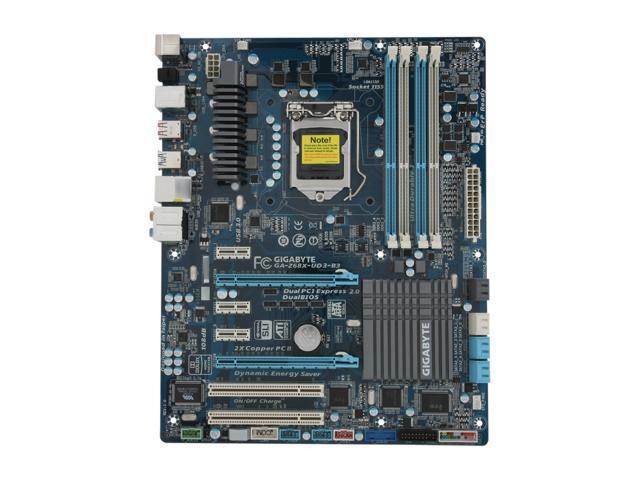 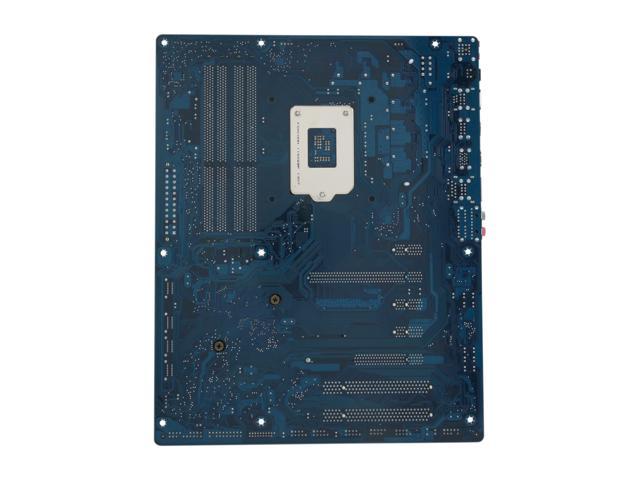 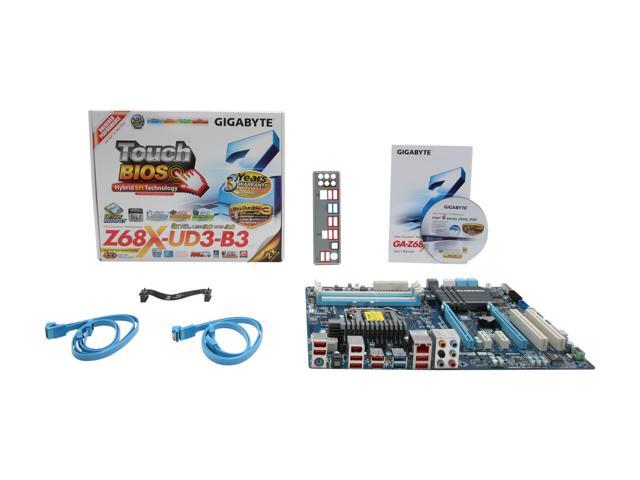 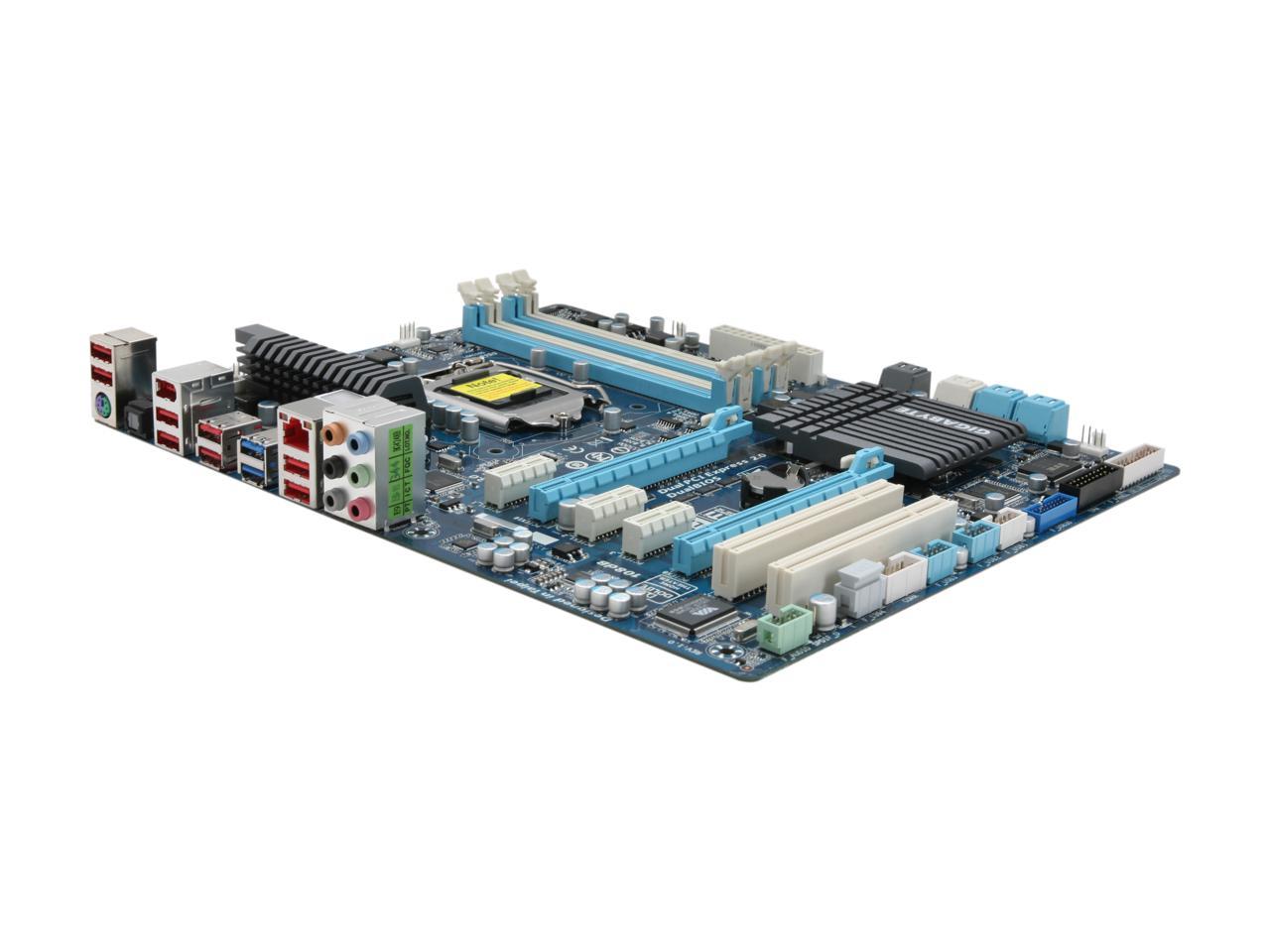 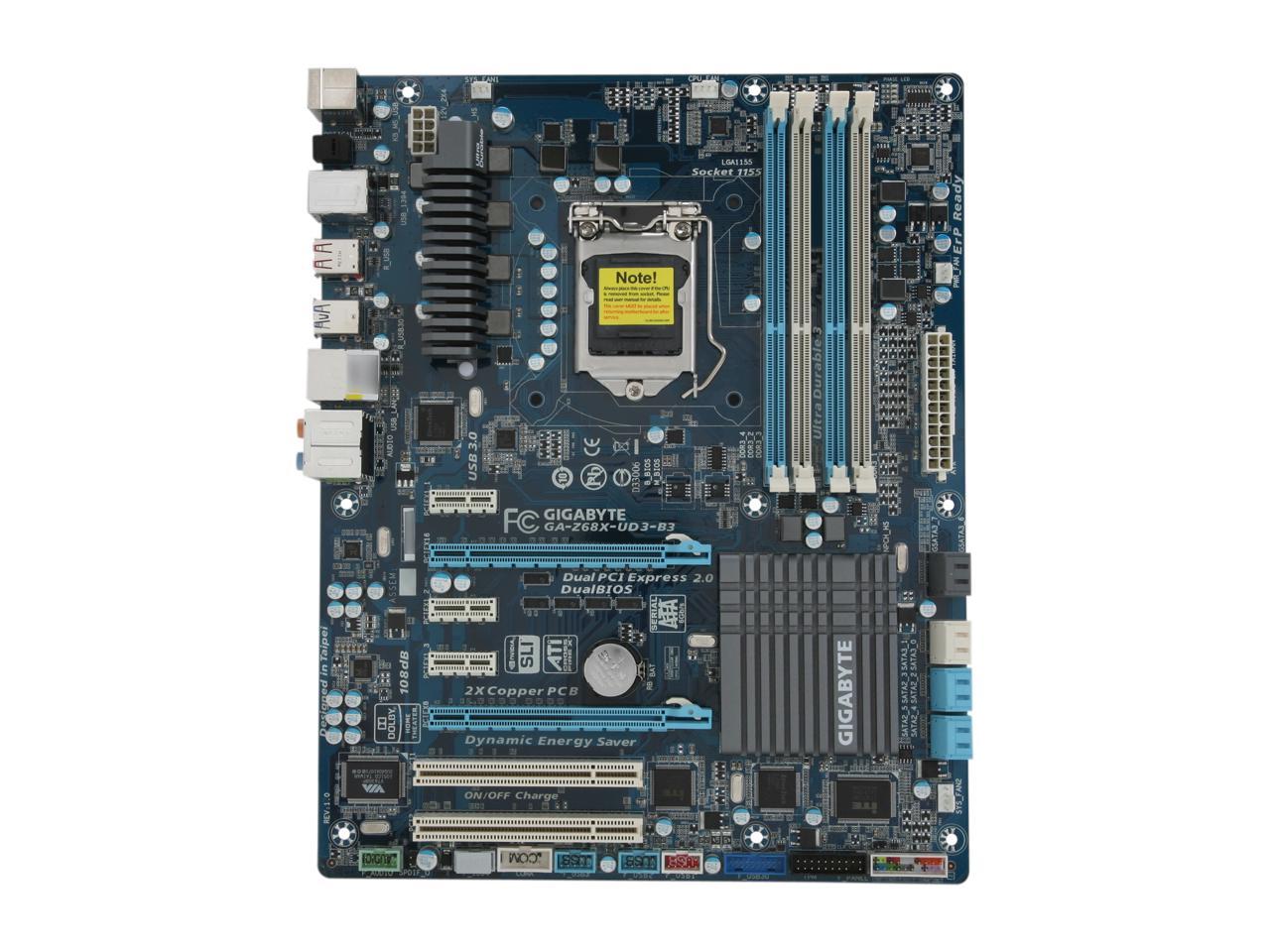 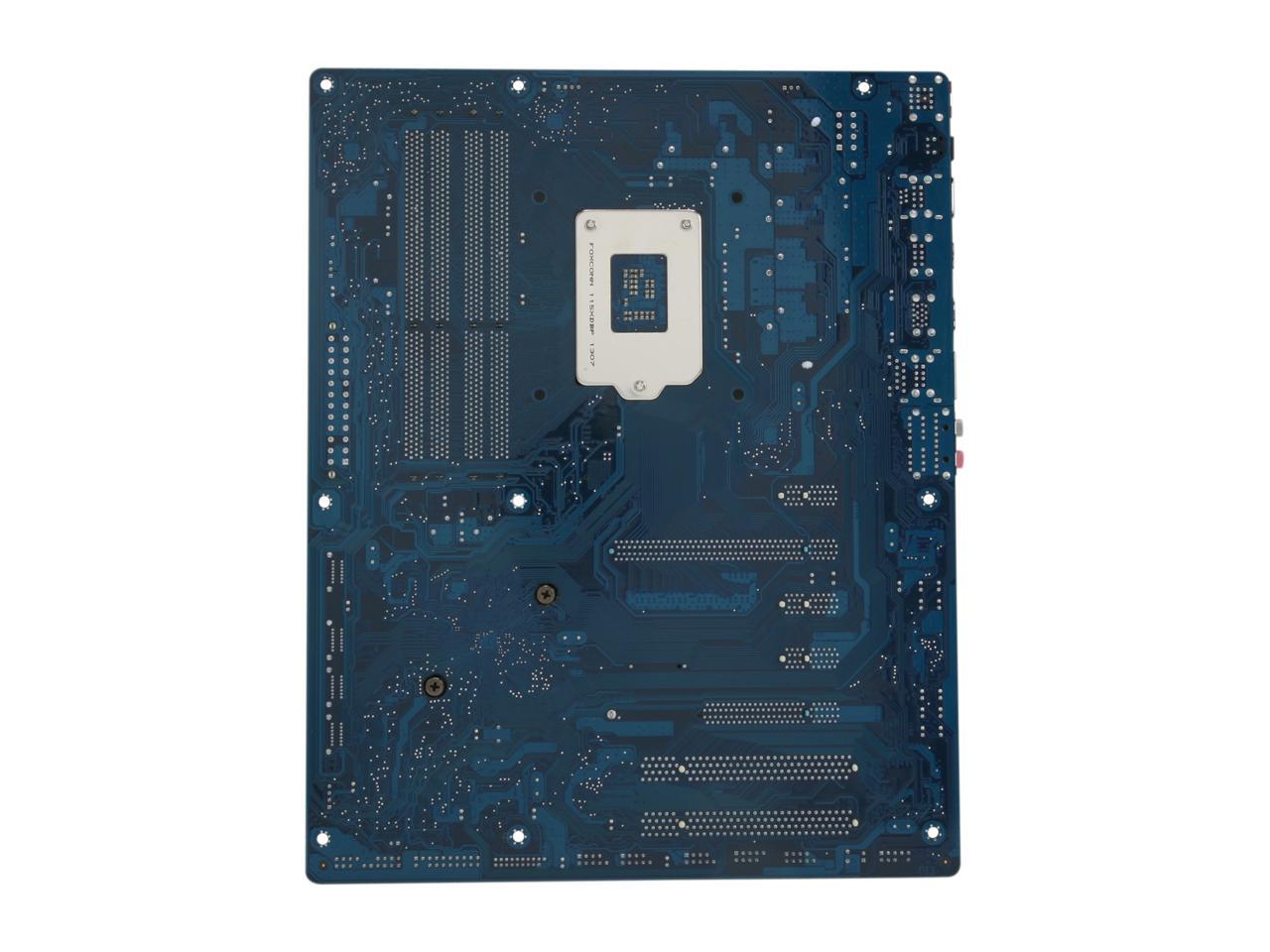 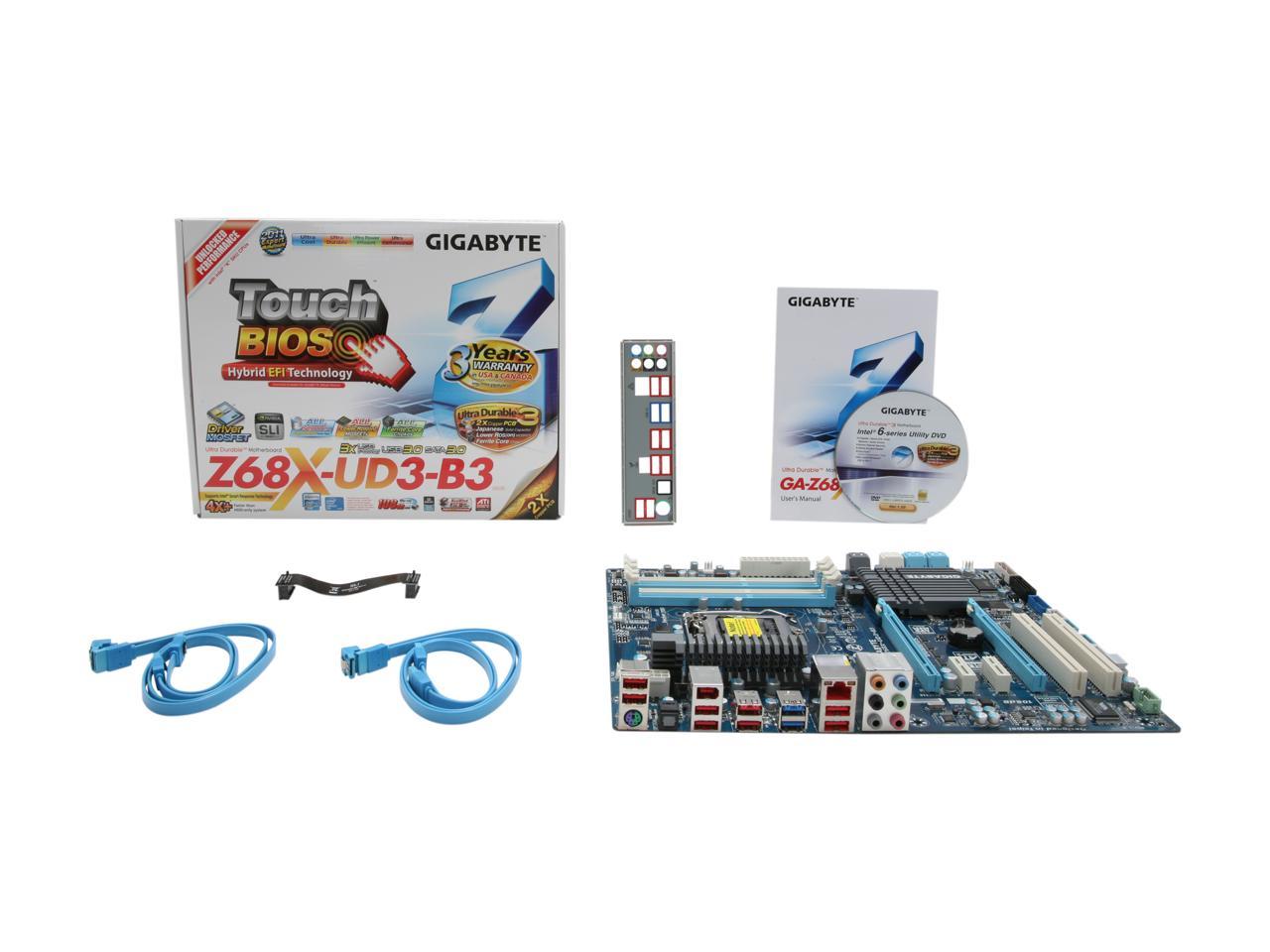 Learn more about the GIGABYTE GA-Z68X-UD3-B3

Pros: works great, i like the touch bios windows program. gigabyte has a lot of Z68 boards, this one was the best fit for my budget and it didn't disappoint. i'm not too serious about overclocking but i like that the option is there and easily accessible with the gigabyte utility.

Cons: wasn't installed with the latest version of bios, but this was easy to get using their utility.

Overall Review: mine came with Bios version F1. i was getting an error using the smart response technology where i could enable it, but at reboot the drives would need to be disassociated and i would have to re-enable the acceleration. after updating the bios to version F2, everything worked fine. just make sure when you update bios to re-enable RAID control or you will get an endless loop of blue screens.

Pros: Great board design with lots of expansion ports. less expensive than other z68 motherboards out there.

Cons: 2 of the sata 6 ports are controlled by marvell. no onboard video ports

Pros: 1st of all, this mobo does support SLI. There are 2 x16/x8 PCI-e slots on this mobo. Previous reviewer might just mixed it with P67x UD3, which only has 2 x16/x4 PCI-e slots. The only noticeable difference between this mobo and UD4, are VRM phases (oh, and color of course). This mobo has 6 VRM phases while UD4 has more. As long as you don't intend to do insane overclocks like torturing your i5 2500k to 5Ghz, but only wanna have a good mobo for gaming, supporting SLI/Crossfire for furture proof, and probably for mild overclock, this is the right mobo for you.

Cons: Well, I personally don't very much like gigabyte's driver and additional softwares for twisting the computer. I would prefer to use BIOS for overclocking and configuration. Seriously, users are not supposed to change settings of BIOS everyday, or by "one-click".

Overall Review: It's ACTUALLY just fixing a Z68 chip on the previously designed P67 mobo, so no IGP support (and SSD caching is just a software level implementation, mainly a marketing trick of Intel), but I am very glad they upgraded the PCI-e slots to support SLI, and it is cheaper than P67X UD3, so what can I complain?

Pros: -A lot of ports for connections

Overall Review: I had this for 5 years, worked fairly well, maybe the bios is a little confusing but it worked. Tried overclocking for the first time, and the bios just gives up. I get stuck in a boot loop, can't get into the bios. Tried resetting everything, tried restoring backup bios, nothing. Got a new mobo online and everything works fine. This was a time bomb mother board and I got unlucky with warranty.

Pros: Fine when it will actually let things pin up and boot. Sadly that becomes rarer over time.

Cons: Googling my symptoms seems to indicate that Gigabyte boards have developed a reputation for the incomplete boot process problem, and there is nothing by way of a solution out there. Rebooting and getting back into windows has become an overnight process for me... let it keep on trying to spin up long enough and it will work.. but not any time within the first hour or two.

Pros: Solid build, fast. Sata ports are on the back end of the board which makes for better cable management if you have the right case. I could see where this might be a problem in a small case!

Cons: 8 pin power connector is a reach for some power supplies. CPU fan sits VERY close to the memory. When I restart my computer it shuts down. When I try to power it up it runs for about 3 seconds then powers down again. It would randomly boot into Windows but it was highly unrealiable. I flashed the bios per another user having luck with this, however it did not work for me. RMA with Gigabyte in the process, shipping it out today.

Overall Review: Bought 4 of these for new builds at work. 3 of them worked flawlessly. The 4th has given me some problems. If Gigabyte handles this in a professional matter, I will be buying more of these boards! Sometimes you get bad parts, it is not always an indication of how well its made.

Cons: After about a week or so, I started having problems. Occasionally the CD-ROM drive would unload(no longer detectable), system hung for a while, any restarts would result in complete shutdowns, followed by continuous restart/shutdown cycles. Flashing the BIOS did help it quite a bit though.

Overall Review: Not a bad board considering the price. If you purchase, flash the BIOS asap. Will save you from a load of headaches. Now problems occur very rarely.

Pros: Not too pricey Worked great for the first week or so

Cons: After about a week it started giving me problems. Computer would crash and require several boot cycles to finally get it up and running again. Once it boots up it says it had failed due to instability with overclocking.... I DIDN"T overclock anything... RMA