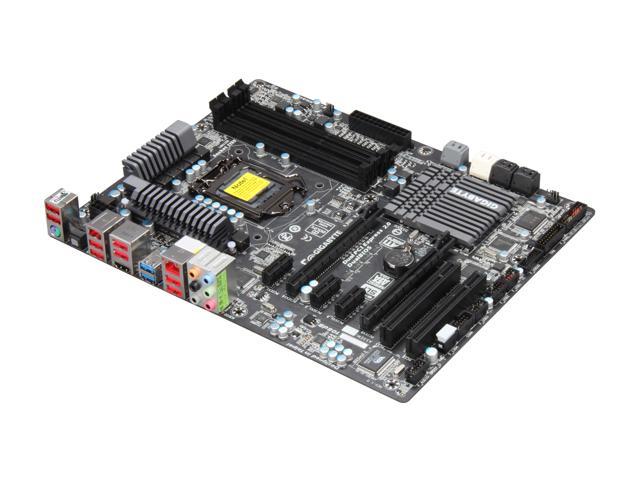 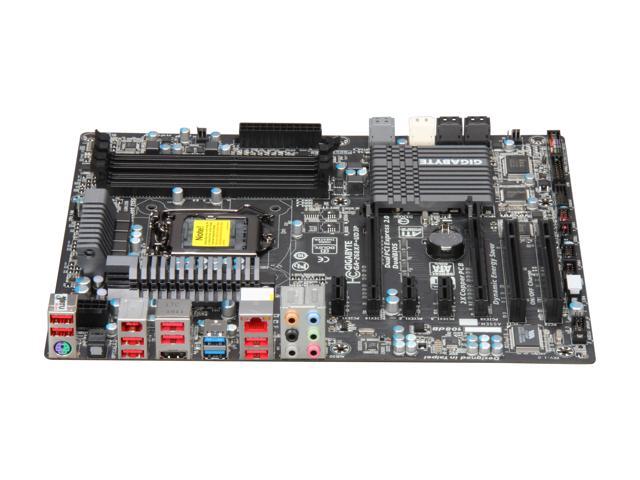 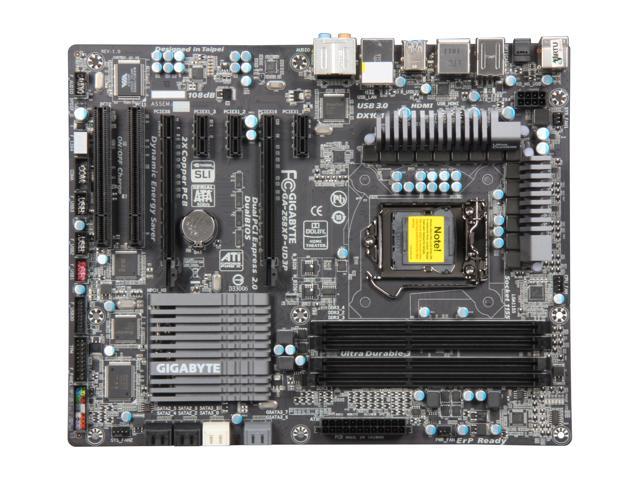 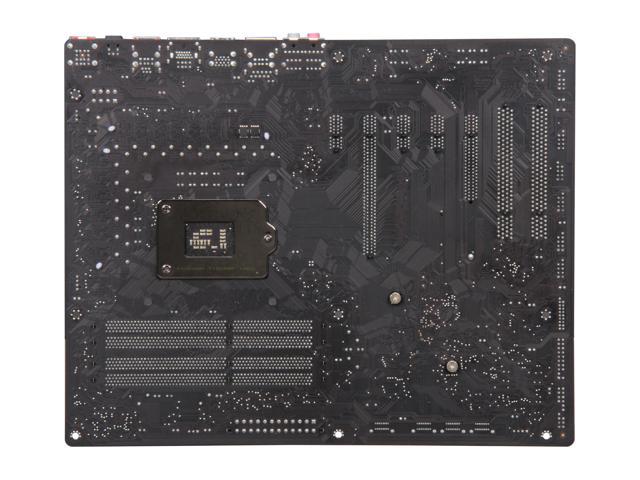 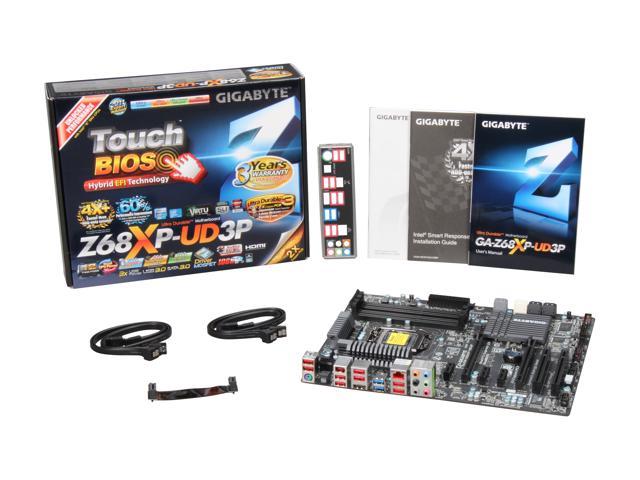 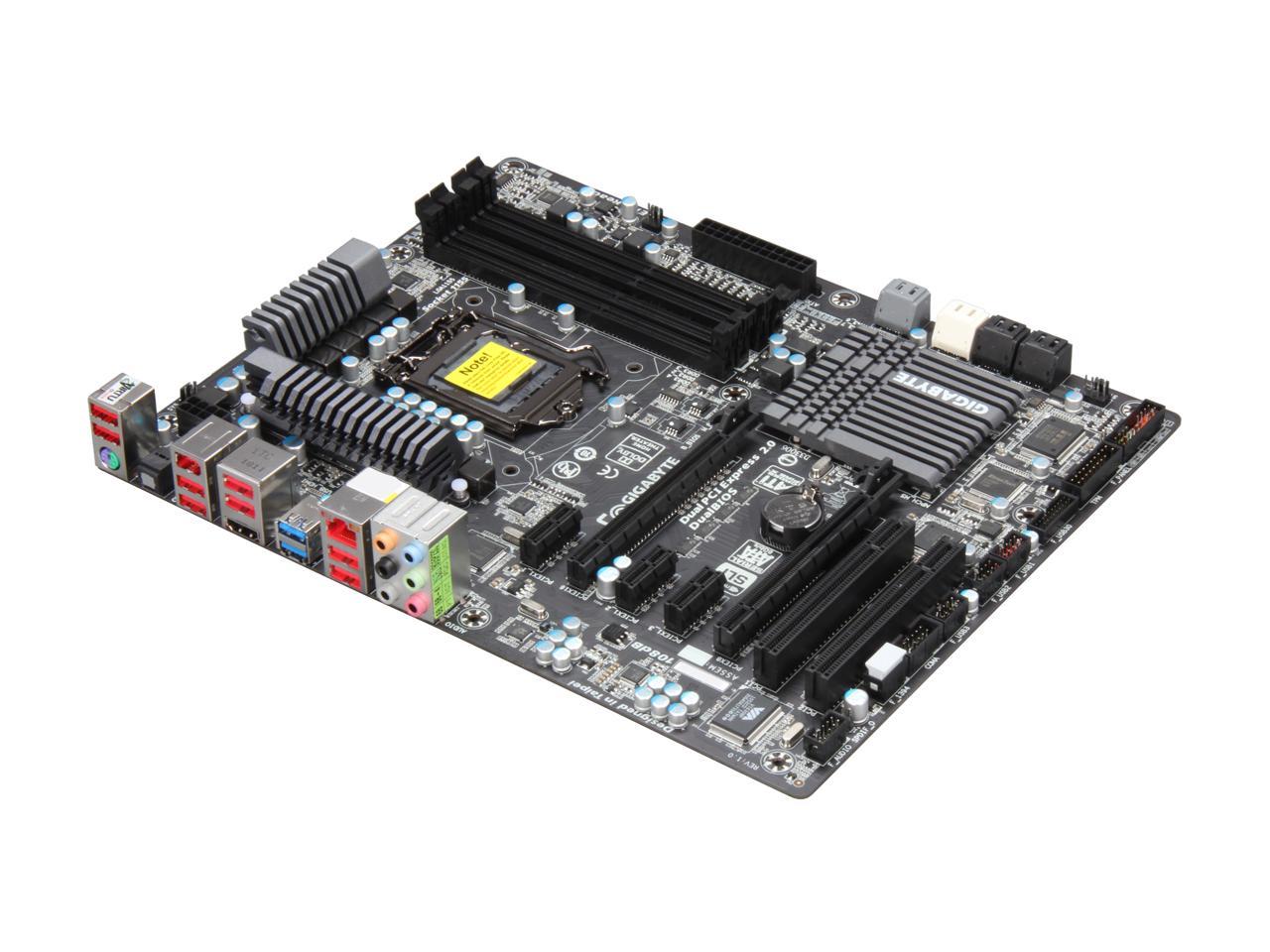 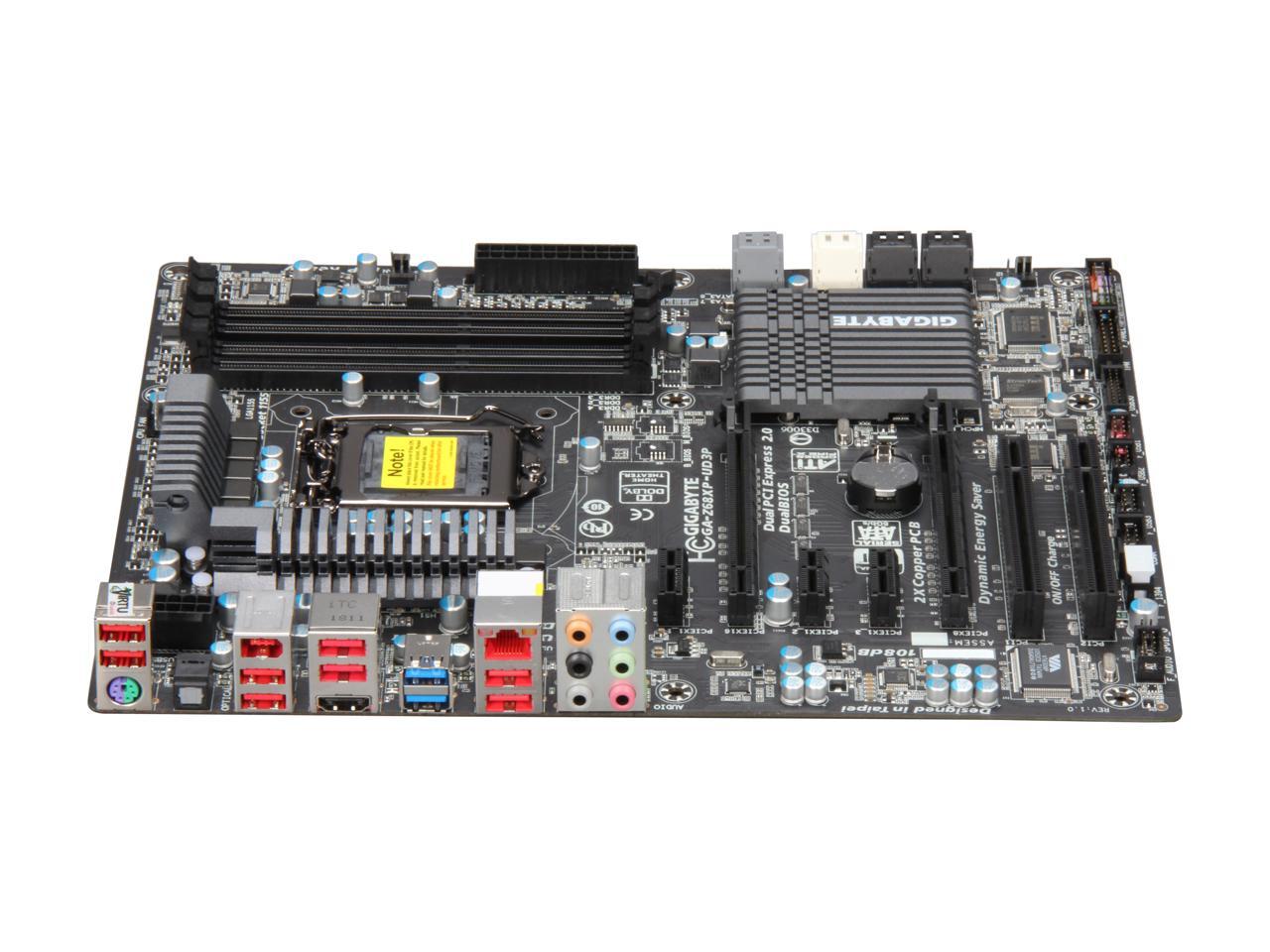 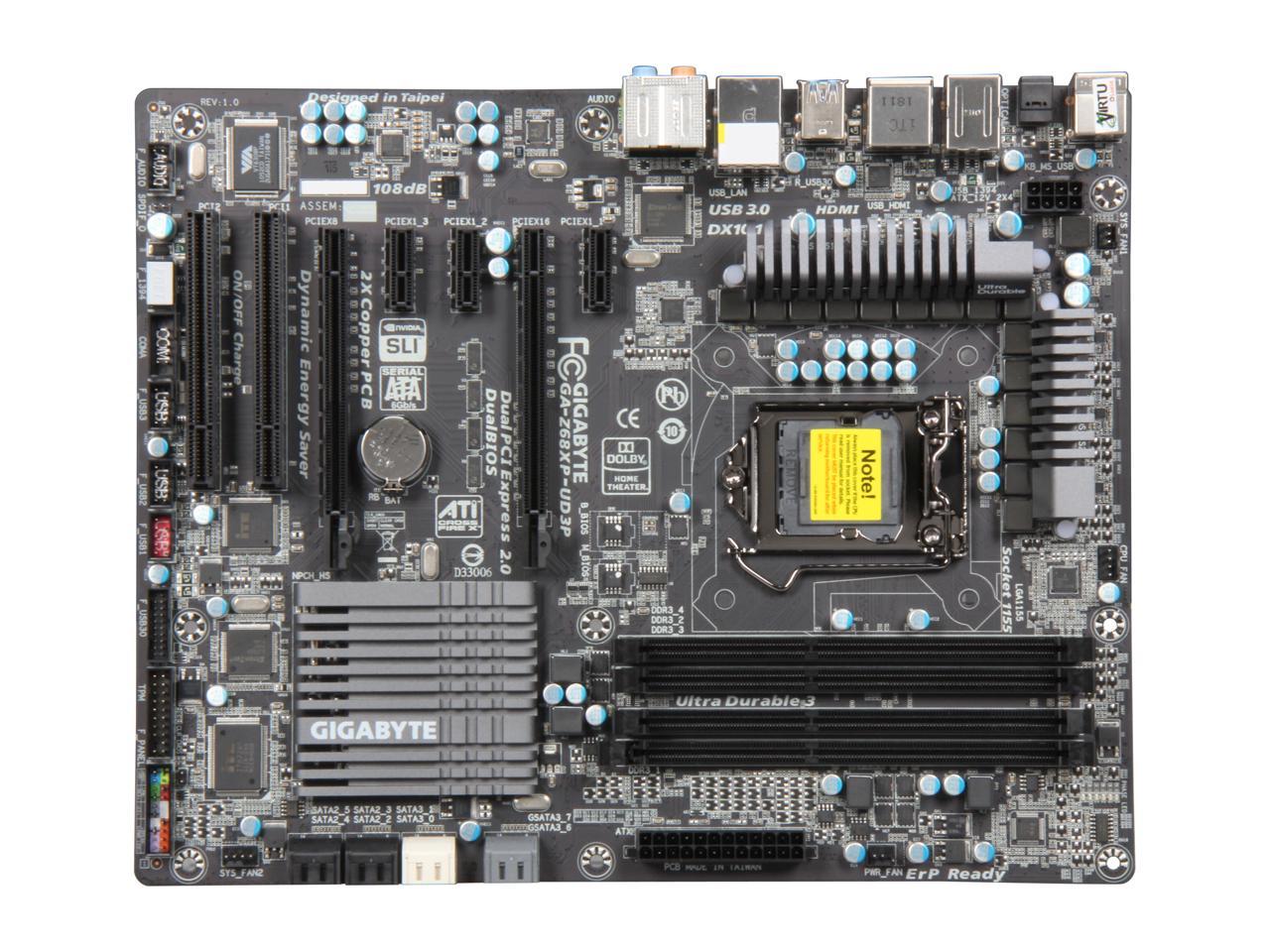 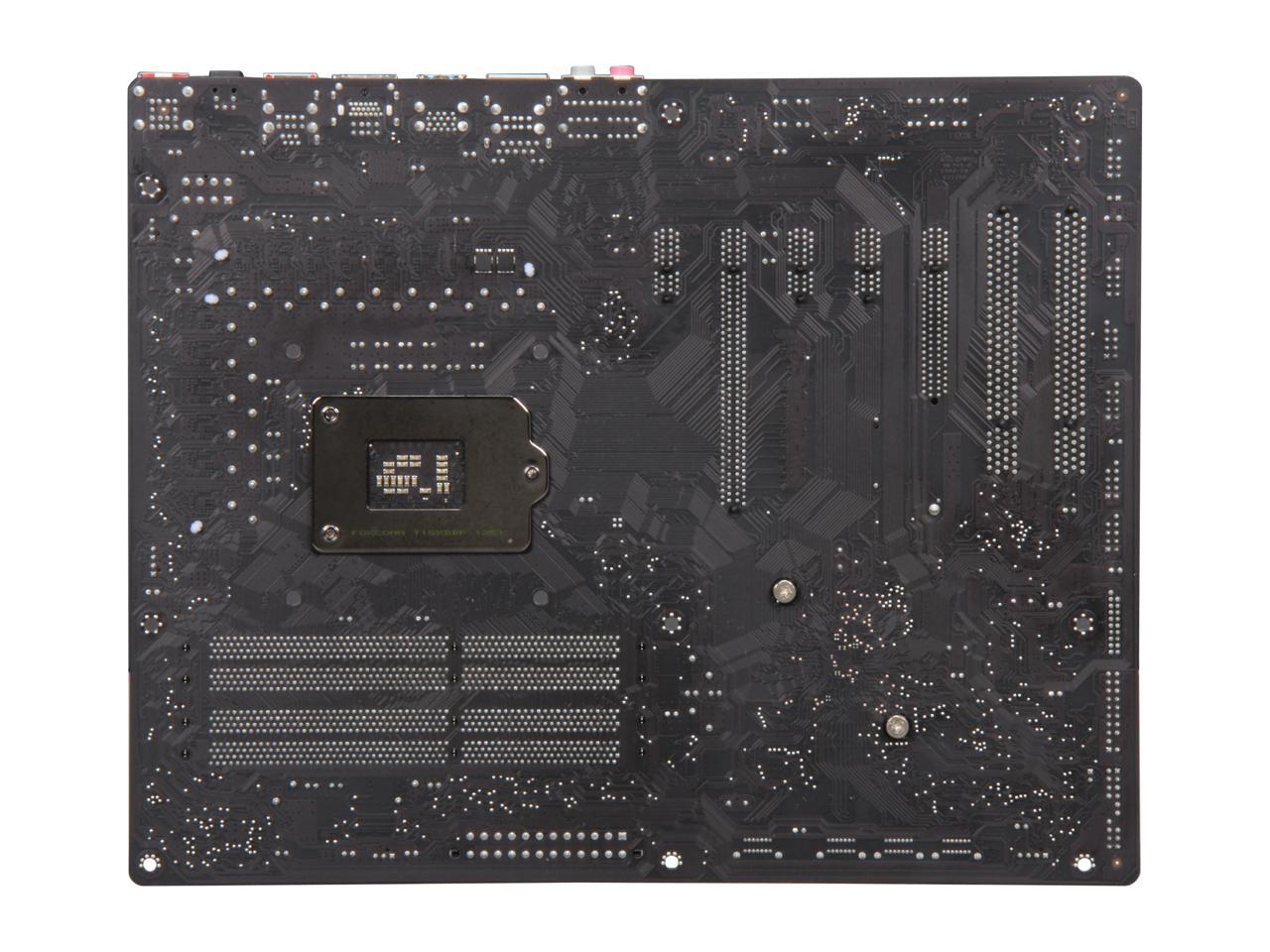 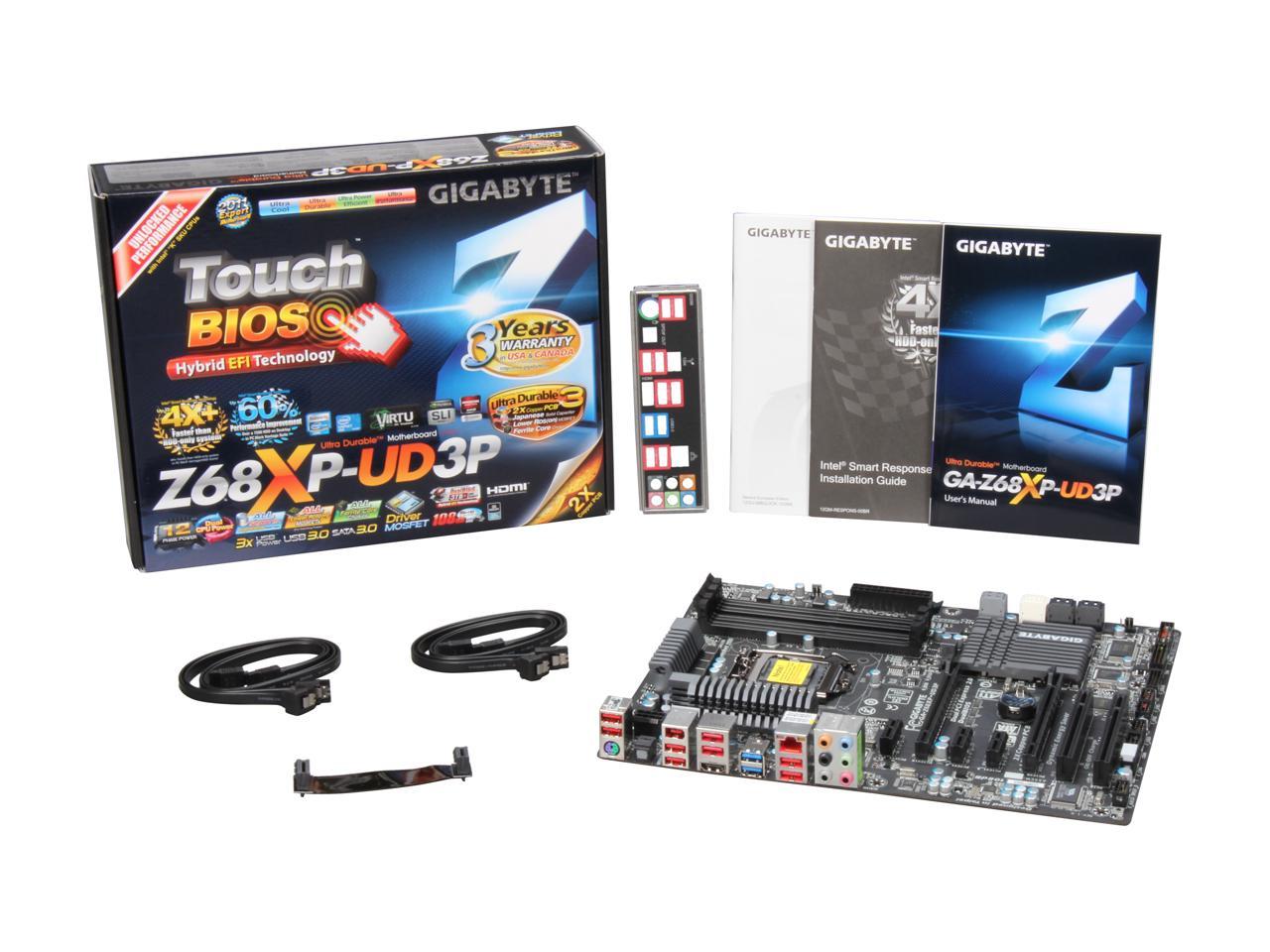 (235) Write a Review
OUT OF STOCK.
Overview
Specs
Reviews
GIGABYTE Z68 series motherboards provide all the advanced overclocking features users have come to know and love about the GIGABYTE P67 series motherboards including increasing processor core ratios, increasing DDR3 memory ratios and increasing power and current limits. In addition, GIGABYTE Z68 motherboards also allow users to increase the graphics core clock speed, for even greater graphics performance. A wealth of engineering advancements in power delivery, including 12 phase power design, dual CPU power technology, new 100& hardware VRD 12 compliant CPU power design and driver MOSFETs, help provide robust energy supply for your processor and increase the stability and reliability when overclocking. Unleashing the potential and driving your system to the limit would be much easier than ever.

Learn more about the GIGABYTE GA-Z68XP-UD3P

Pros: Decent cooling onboard, much better than your cheaper z68. Supports Crossfire or SLI at x8/x8. Great memory performance. Intel smart cache technology with SSD. Plenty of hardware onboard for high overclocks. Native USB 3 and SATA 6 GB/s. Excellent sound quality for onboard audio. Over clocks very well and BIOS are very easy to use. The board is well designed for the most part, well thought out. Everything fits together nicely with room to spare for the most part. I really liked their multi step load line calibration or Vdroop. 10 steps for the advanced OCer. All 3x power USB ports for devices like iPods that suck up juice. And it works! Especially well for headsets running on USB.

Cons: Memory dims a bit too close to the CPU socket. Had to raise up my CPU fan, Hyper 212 Evo, a few cm to fit my Rip Jaws memory and that was in slots 2/4. 1/3 the CPU cooler got in the way. However, they recommend slot 2/4 for dual channel. No long Crossfire bridge, no surprise there. You'll need a 10cm Crossfire bridge. No speaker for beep on boot. There is a spot for one. I added one and it just kept beeping, no wonder they left that out. Only 2 USB 3 ports on the rear I/O panel with 2 more on the output header. No e-SATA.

5 out of 5 people found this review helpful. Did you?
Thomas T.
Ownership: 1 month to 1 year

Pros: So far a great board. Awesome BIOS, lots of options. This is the "gamer" version of the board. Z68 chipset is the way to go if you need to overclock. Nice color, really looks awesome with fancy looking G.Skill RAM.

Overall Review: Some people complain that there is no onboard video hookup. This board isn't for using onboard video, it's a gamer board, you are supposed to have a video card. There are plenty of other boards out there if you need one with onboard video.

3 out of 3 people found this review helpful. Did you?
Anonymous
Ownership: 1 week to 1 month

Pros: Extremely solid, well built, board with an easy to navigate BIOS - and my first experience with UEFI, and it's quite nice - much easier to read than the classic BIOS is. Paired it with an Intel Core i3-2120 with a Cooler Master Hyper 212 on top - and it's run quite smoothly and excellently. My CPU cools to about 23 degrees C, and it's very stable so far. It detected my Crucial M4 and installed it without breaking a sweat, and is one of the main reasons I'm going SSD. Made a couple of mistakes in the BIOS - and it noted that on boot up - but with the "load fail safe" feature on the menu, I was able to restore it and get back to work without batting an eye! Very well done product, and I will definitely buy Gigabyte again.

Cons: The instruction manual didn't make it clear on how to setup the case connectors - so my IT guy and I had to try a few different things before we were able to get it to work properly. The driver disc installed some really annoying malware that not only corrupted IE, but also Firefox, and was incredibly difficult to get rid of the first installation go-round, but once I got my Crucial M4 up and running I managed to make that go away. Be careful when installing the driver DVD.

Overall Review: I switched from an 870-based Phenom II to the Intel Z68, and I couldn't be happier, my machine is running better than ever and with the CPU and everything else that I picked out, I have a solid system that's going to last me through several years of school and everything else I can throw at it. I love the z68's upgrade ability and wide range of processors (and future processors) that it will be able to run.

Cons: Possibly a Con for some but as mentioned by other reviewers, the SATA ports are side-facing instead of towards you. This is ideal if you have a case similar to the HAF 932, where the drive bays are loaded from the side, instead of the front of the case. I'm not sure if that made any sense at all, so I appolgize. If you're familiar with the 932 then you know what I'm talking about. And now my specs... i7 2600K Corsair H60 cooler HAF 932 full tower 16GB Kingston Hyper X (4 x 4GB DDR3 1600) Seagate Momentus XT 500 GB hybrid Seagate Barracuda 1 TB Hdd PNY GTX 480 SB X-Fi Fatality Pro Samsung 24" LCD display @ 1920 x1200

Overall Review: This was my first Intel build, and my first Gigabyte motherboard. My previous pc was a Phenom II 975 on an MSI 890FX board. AMD has always been my first choice for gaming pc's, simply due to the price/performance ratio. This all changed with Sandy Bridge. Not only do I have a pc that is at the same level as an i7 970 (stock speeds), but I was able to do it under $600. Also worth noting, my new Intel setup blows away my AMD build, to say the least! =) The GA-Z68XP-UD3P gives you alot of options and features that you might normally find on a higher end board, for a lot less money. If you're an AMD fan looking to get in on Sandy Bridge, this is the perfect board to do so.

Pros: This mobo looks sexy, the features are sexy, all around great board from what I can tell! Got it in Thursday and I'm happy with my purchse! Would buy again! Haven't had any issues aside from a few qwerks.. See cons.

Cons: -SATA Ports are in a HORRIBLE spot if you have the Antec Full Tower like me, VERY hard to get it and to get stuff plugged in.. (Can only have x1 HDD and x1 DVD Drive at a time.. -CPU Socket Lever - I could fell it coming off the mobo when I was trying to lock my i5 in, was really hesitant about putting everything together.. Also, the Corsair H50 Liquid Cooler is a pain to install! The back plate must be twisted (well bent is a better word) for it to line up properly, and you'll have to rig it up to where the CPU mount screws in correctly.

Overall Review: Amazing board, easy overclocking, great features, will buy from Gigabyte again when it comes time to upgrade!

Cons: I got the boot loop at no extra charge, lol. I removed the power coord, pulled the cmos battery and let it sit while I went out to eat. When I returned I flashed the bios to F6 then I removed all power again including the cmos battery. Let it sit for 5 minutes or so to insure all artifacts are removed from the system. Popped the battery in, powered it up and it's been working like a champ.

Overall Review: Every once in a while I get a motherboard that requires a little TLC to get it going. It sucks but it goes with the territory of system builds. The casual system builder may struggle with some out of the box issues. I'm sure some motherboards are truly defective but reading some of the reviews it makes me wonder. This board is awesome! I wouldn't hesitate to buy another. Good luck.

Pros: Not one issue with this board. Has worked flawlessly for four months. Love it (and I used to be an ASUS fanboy). Nice instruction book with it. Easy to build on this board.

Pros: Researching Z68 boards made my head spin. There is so many options and so many "problems" with various brands and models. I take the "problems" with a grain of salt because user error often results in 1 star/egg from the disgruntled builder. Enough of that, onto the board! This board works great. CPU, RAM, HD and DVD SATA cables, PSU connector, etc were all installed and plugged in with ease. I read the BIOS manual about 3 times front to back which wasn’t necessary. BIOS was simple an easy to navigate. My new comp booted up initially with 0 problems. Every USB port works, including additional I/O 2.0 and 3.0 ports on the front of my case. I have cables plugged into nearly every port and run my comp hard (for gaming) every day. I’ve had 0 issues and haven’t had a single boot loop. This is a great Z68 board.

Cons: I had a little difficulty plugging the correct case pins into the board for power, reset, HD light, etc. Every connector was 1 or 2 pin and some where different colors than represented in the board manual. I figured it out and it works great. I'm not sure who to blame for that (the board, the case, or the user, haha).