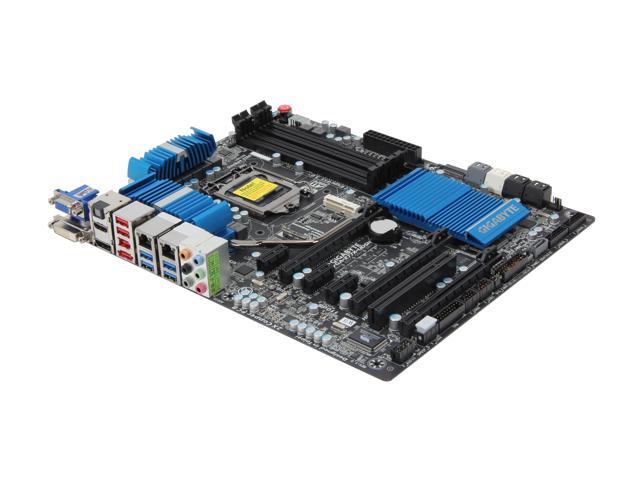 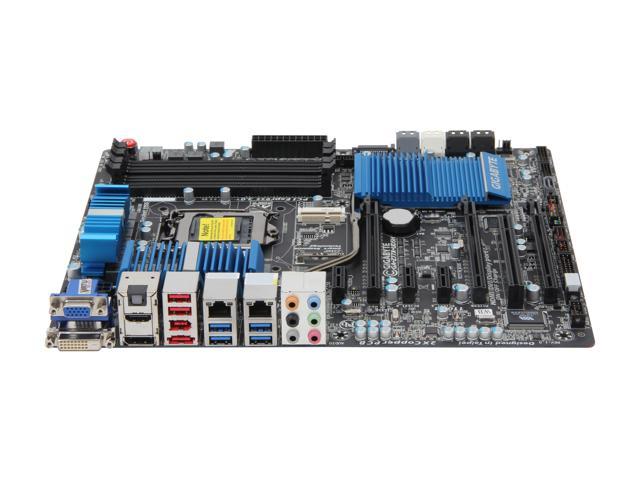 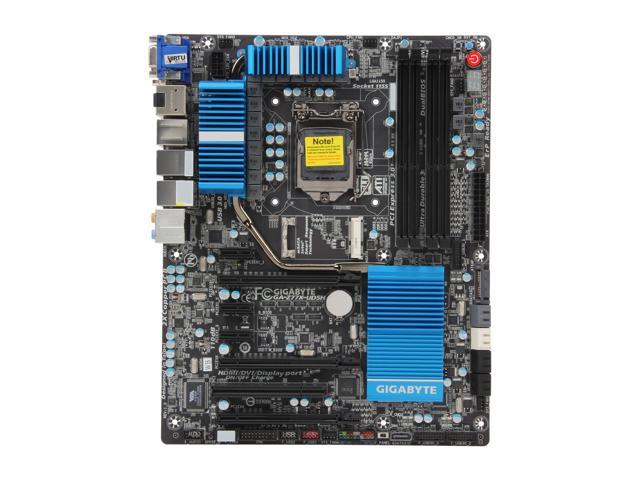 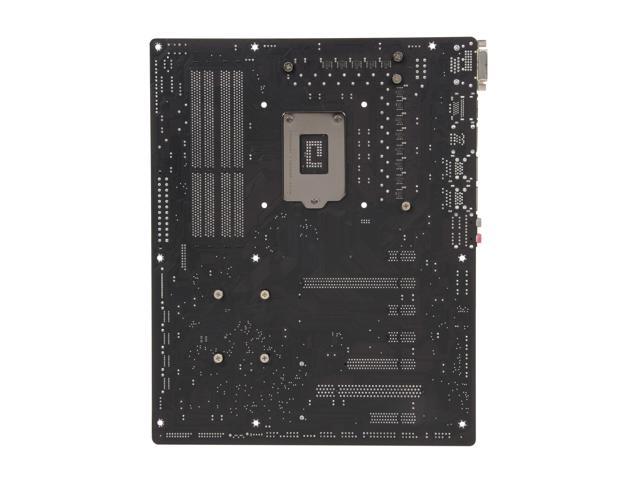 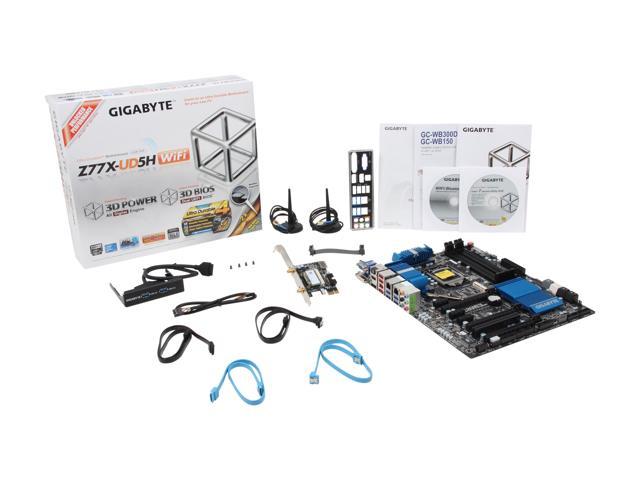 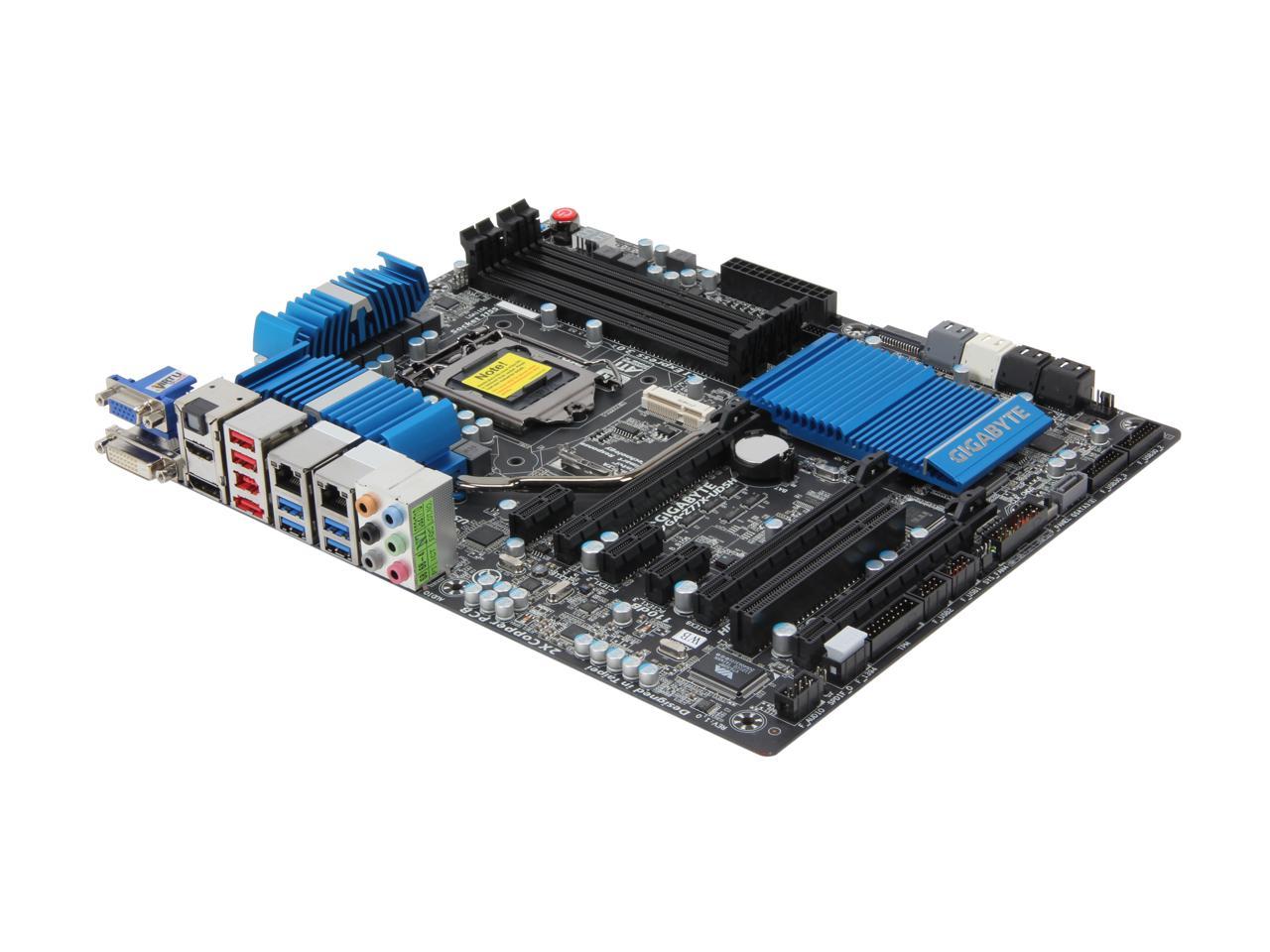 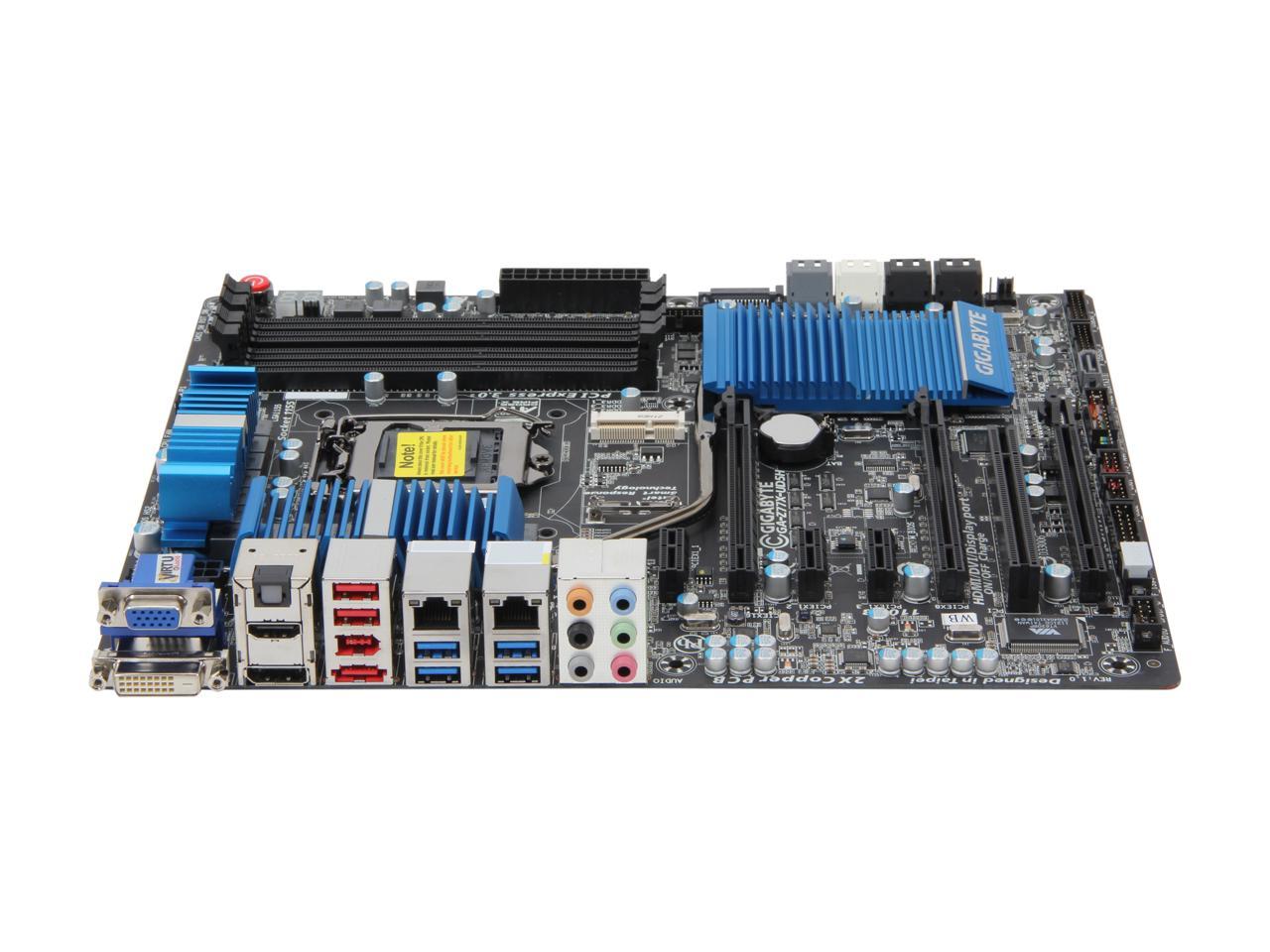 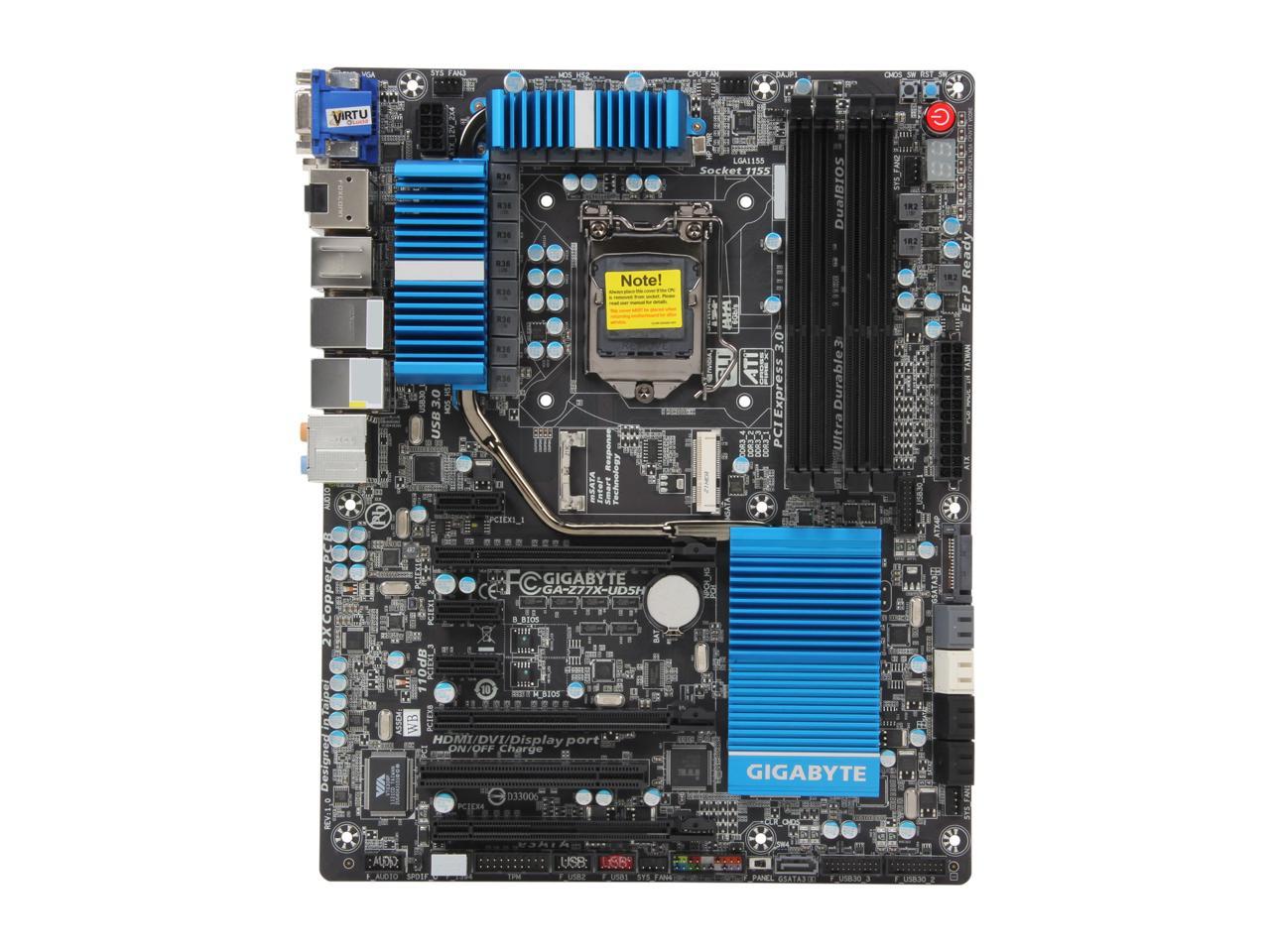 Learn more about the GIGABYTE GA-Z77X-UD5H-WB

Pros: This is an excellent motherboard. I switched from a Gigabyte P67a-UD7-B3 to this, and I have absolutely no regrets. Boot time is much faster, much more consistent and runs much cooler than it's P67 counterpart. It's also able to clocks my CPU at a much lower voltage while being able to maintain a higher level of stability at mid-level overclocked settings (around 4.2Ghz). Previously, I had difficulties overclocking and adjusting my memory clock speeds and timings using a P67 board, but this board is much easier to work with even with low voltage memory (1.35 cl7). The EUFI is very clean and easy to work with, and I find the 3D display intuitive for inexperienced users. I actually prefer it over using a regular BIOS like interface with just words. It is very nice to work with. The fan control is a significant upgrade from prior P67/Z68 Gigabyte boards that I've worked with. The board comes equipped with 5 4-pin headers that you can hook 3 or 4 pin fans to.

Cons: Pros Continued: The Wifi / bluetooth card is excellent. To use bluetooth, you have to have the PCIe card connected using a USB header (either external or internal). However, the Wifi aspect of the card can be used without the USB header. What's particularly nice is that I play a lot of MMOs and get surprisingly low latency (nearly identical to what I was getting using a ethernet cable). Cons: I'm not the hugest fast of Gigabyte's motherboard software, but I generally prefer not to use manufacturers' software to begin with. I actually prefer the front panel headers to be more toward the right (where they played USB 3.0 headers), but this is pretty easy to get around. I would've liked to see a PS/2 port also for my keyboard. Even if it's legacy, I like having full N-key rollover.

Overall Review: If you're buying a Z77 motherboard for the Lucid Virtu MVP software, don't. It's really not that great, and it's pretty dependent on games that Lucid adds to its profile (even though you can add your own .exe files to the list). When I've added games to the profile that weren't already there, I noticed no difference in game performance. The PCI-Express x16 (wired to 4) slot at the bottom of the board will not work without an Ivy Bridge processor. It seems to be like this is how it is with most manufacturers who aren't using a PLX bridge chip to expand the amount of PCI express lanes. The regular & wifi version of this board are some of the highest quality boards at a very reasonable price point. I hope Gigabyte keeps up this trend.

Pros: I'm really happy with this mother board and have no problems.

Cons: Included wirless/bluetooth card uses up a usb port so I have to buy another card to get enough USB ports inside the case. I would recommend getting the version of this motherboard that does not have the wireless card and just buy a 3rd party card.

Overall Review: Works great so far and looks good inside my case

Pros: This motherboard goes beyond any other offering bluetooth, wireless 300bps, Raid, USB 3.0, and on-board mSata connector is awesome and was the reason for my purchase. There is support for USB 2.0, 1394a, and VGA, DVI connectors. I have had no problems at all with this motherboard. I am using GSKILL Ripjaws X Series DDR3-133316GB, onboard OCZ msata drive at 60gb (Sata II), a 120gb SSD (Sata III), and a WD Green Drive 7200rpm/64mb/1tb. The msata is the boot drive containing the operating system and programs that refuse to install on any other drive. The programs (Office,Eclipse,Firefox) are installed on the SSD. The pagefile and hibernate, multimedia, backups, etc. are on the hard drive. It is a perfect layout - imo. Windows gives it a 7.9 so it likes the configuration performance as well. The graphics are outstanding as well as the sound. I've got great results from all the Gigabytes boards I have owned and they have impressed me again with this one.

Cons: The large fin type CPU coolers get very close to the RAM, but it doesn't block you from using both.

Pros: I'm a new pc builder & i was nervous about getting motherboards that have problems...Well this board gave me zero problems! It was a flawless build! Stuck an Intel i7-3770k 3gen cpu, 560ti graphics card along with an SSD 256GB & 16gb of ram supplied by an 800watt power watt supply .. Perfect PC

Cons: 8 pin processor power connector and system fan connector in corner of board are in a difficult spot to work on. USB 3.0 headers on motherboard are not sufficient for holding the cables that plug into them.

Pros: The board has everything you normally need onboard. Most everything works well.

Cons: SATA are positioned in a way that is hard to work with in my Lion-Li case - the harddrive cage is right on top of them. For the price they should have included extra rear USB 3 brackets - they only include one front and there are 2 more connectors for the rear. Several onboard USB 3 controllers act differently with different devices. Front and back are not the same USB 3. So you need to check what works faster with your USB3 device.

Overall Review: Overall it's a good board.

Cons: No cons, everything was great. It was a very easy upgrade from my old LGA 775 setup. No more paging file, it's pretty much instant on and copying files between the SSDs is incredible.

Overall Review: Great motherboard, Wifi is great and I don't use bluetooth but maybe I will in the future. If not I can always swap out the Atheros chip and throw in an Intel one since the card is a miniPCI Express to PCI Express.

Cons: I cannot really think of a con on this mobo, other than it is much plainer looking than many other in its class...but the performance just rocks. Side note - it did default my ram to wrong timings, easy fix and all is good.

Overall Review: I got this two weeks ago and have not had a single issue besides a freeze on boot last week, but that I believe is my ssd. This things bios is fantastic - O.C. potential is great, included tools are even better(dont install LUCID MVP..you will regret it.) Every other tool included is helpful and worth installing. Love the layout of the board, and the included mSATA for caching a mechanical HDD is a great plus - but I did not set that up yet. I got 8 gig of corsair ripjaw and an i5 and this thing is shredding all that stands in its way. Upon install flashing the bios took less than 15 seconds, after changing timing on RAM I was booted up on installing apps in minutes, seems rock solid. Never owned GIGABYTE - always went for ASUS, but this fairly cheap board outperforms boards in a might higher class. Even the sabertooth showed lower benchmarks(even when it was O.Ced) Love this board! BTW, does anyone know why my wireless is operating at 130mb/sec with the expansion card...?