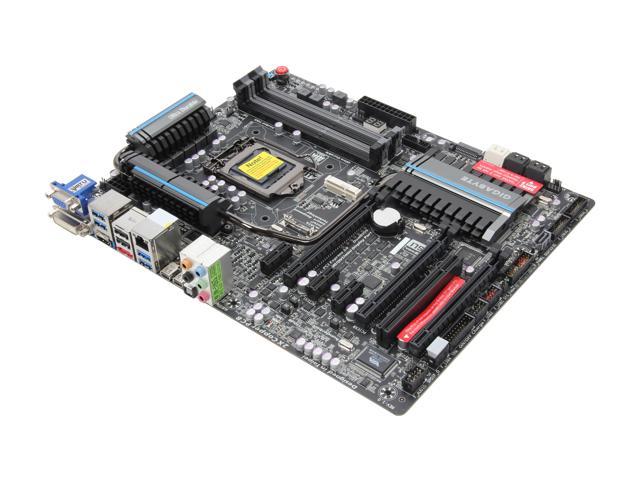 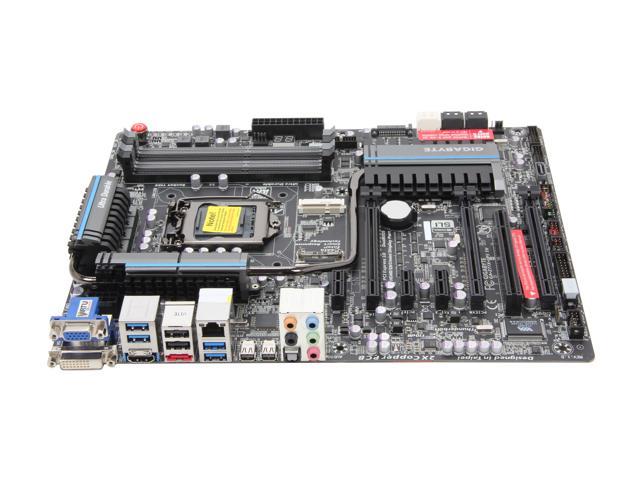 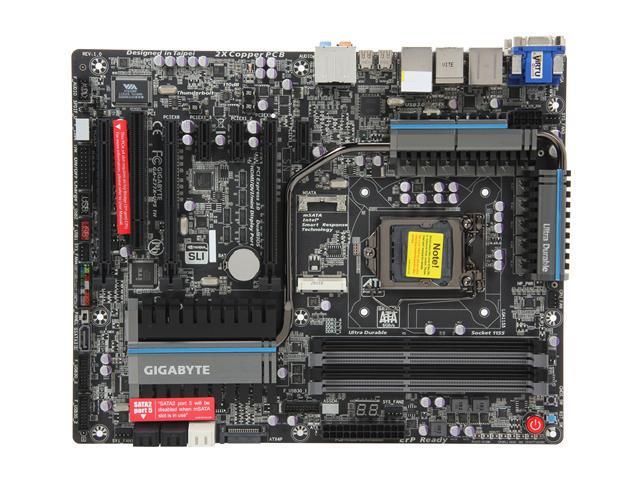 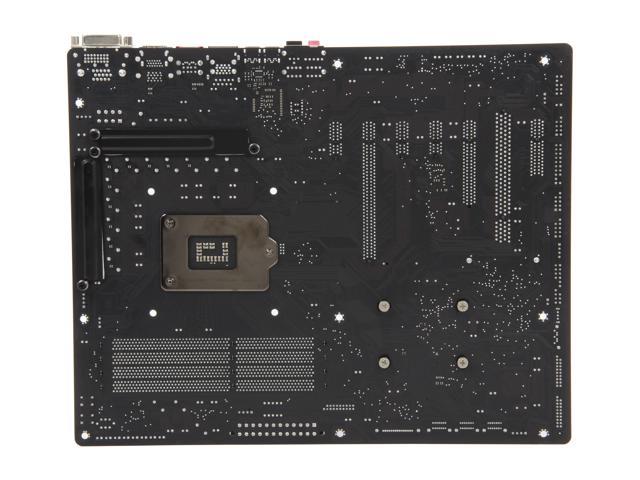 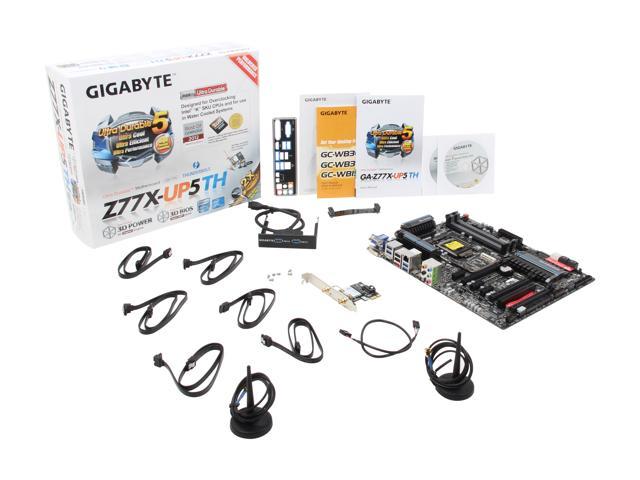 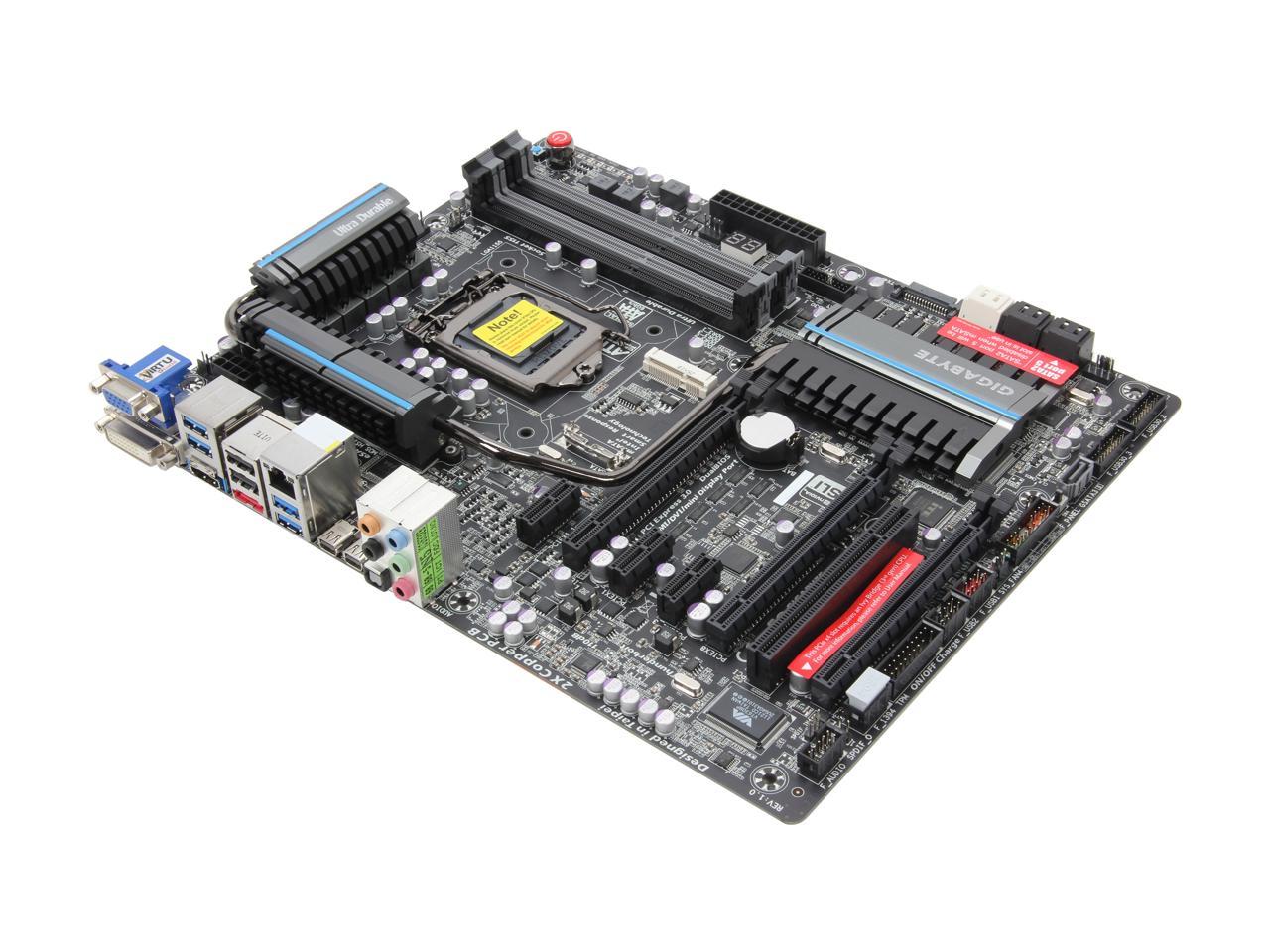 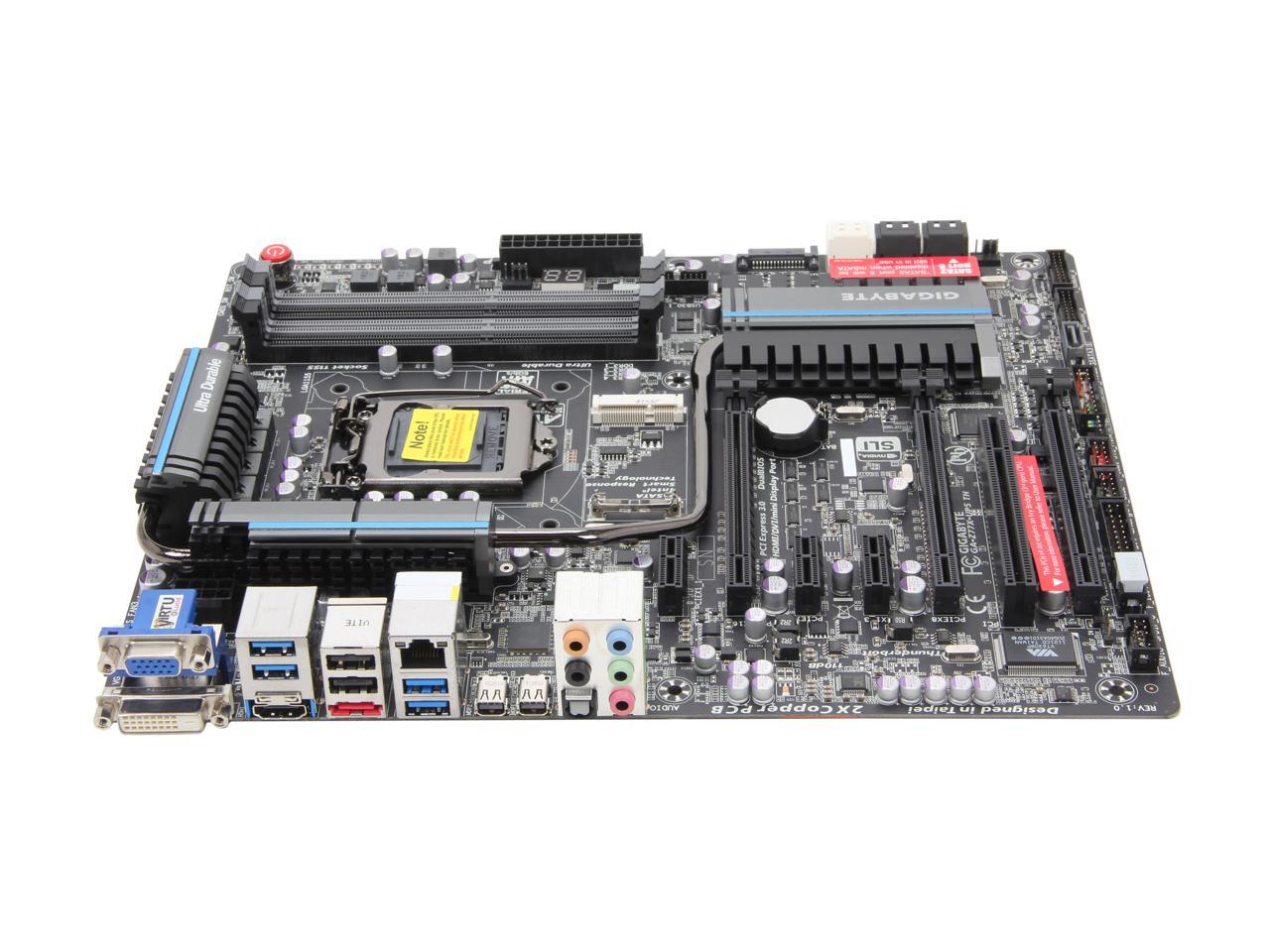 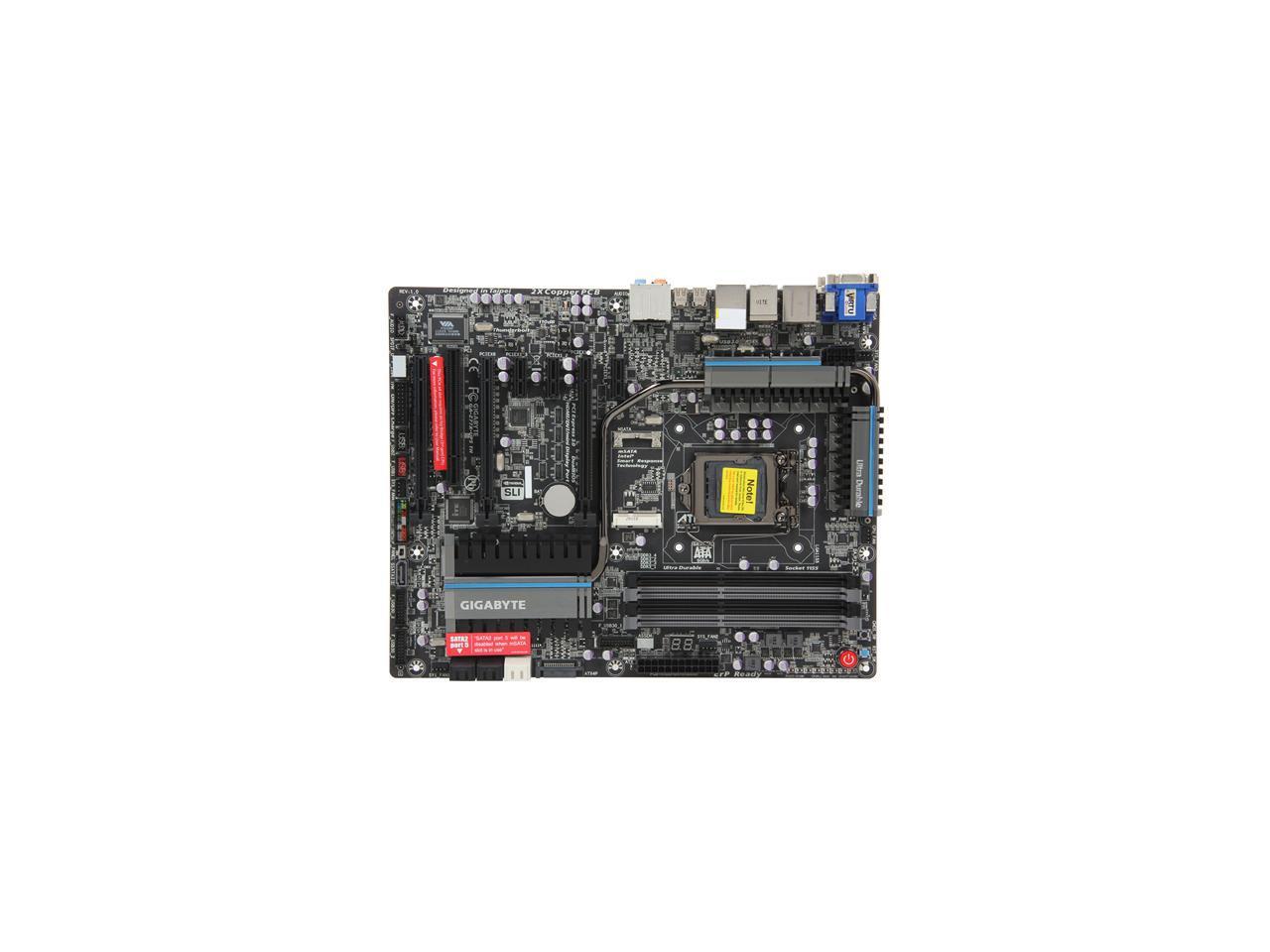 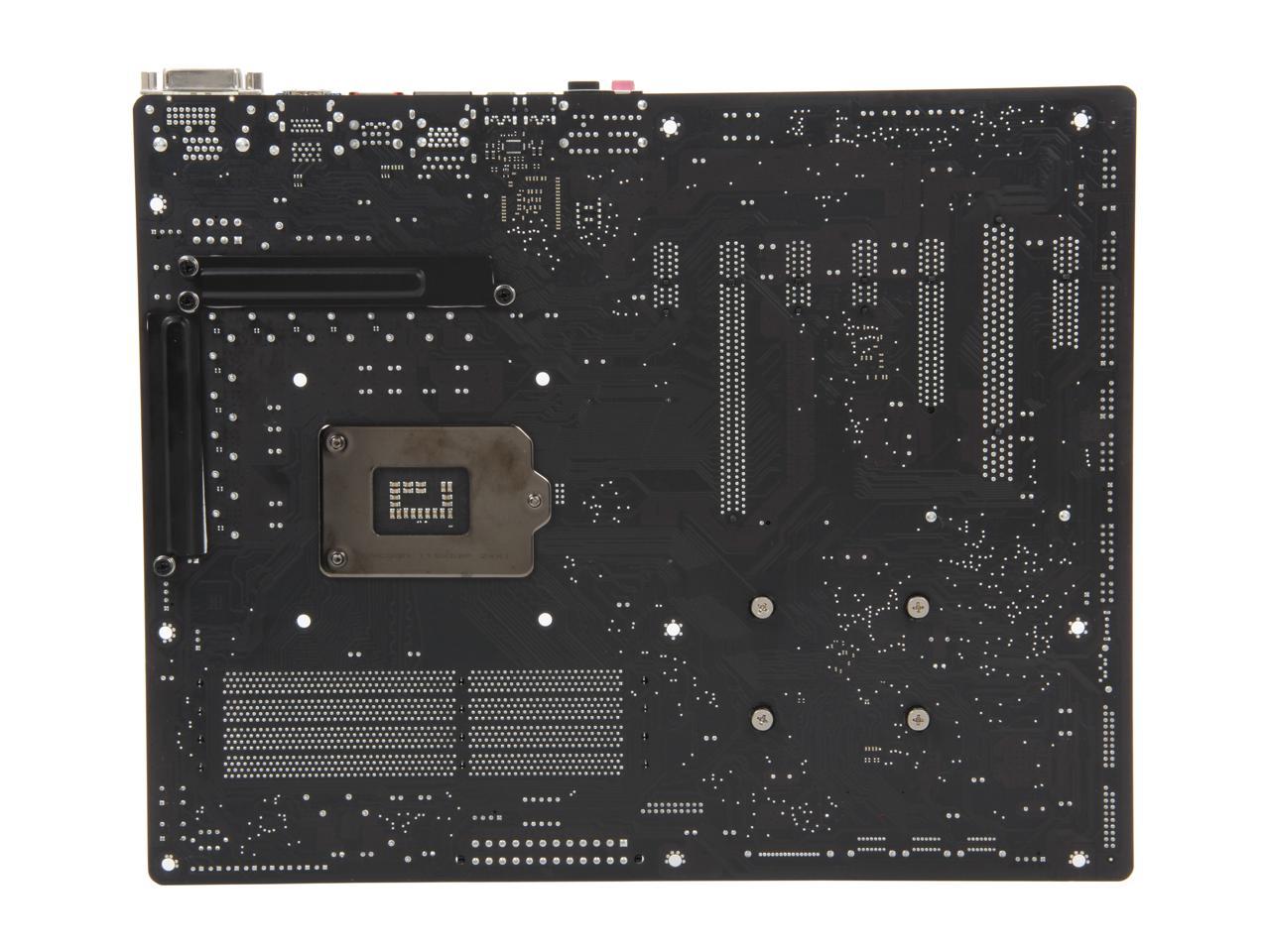 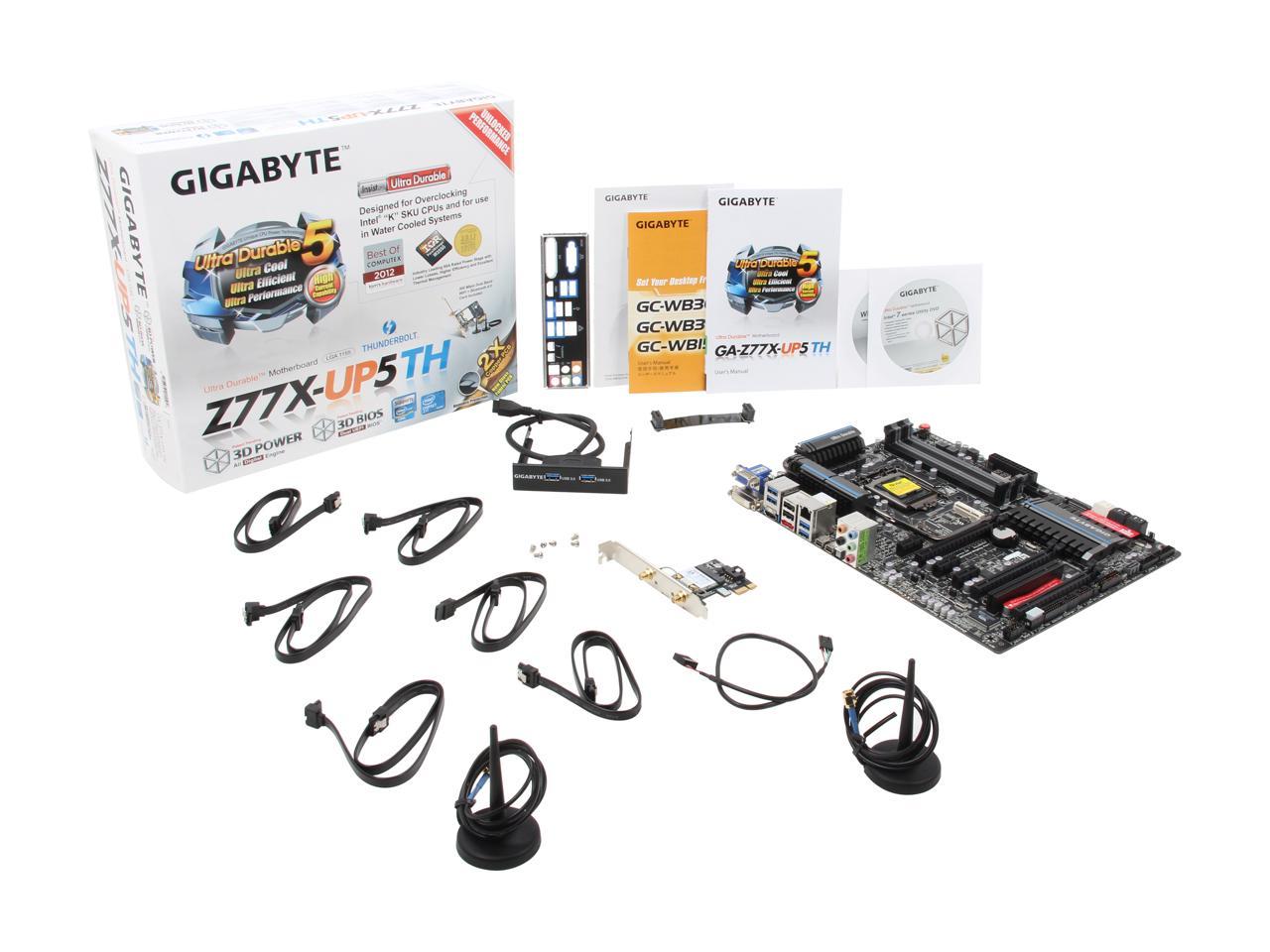 (67) Write a Review
OUT OF STOCK.
Overview
Specs
Reviews

GIGABYTE GA-Z77X-UP5 TH motherboard, the very first to offer fully certified dual onboard Thunderbolt ports. Capable of connecting up to 12 devices plus 3 digital displays simultaneously, with breathtaking data transfer speeds that can transfer 1TB of data in only five minutes, GIGABYTE Thunderbolt motherboards offer the fastest connection interface ever on the desktop PC.

In addition, it also combine a host of new and exciting technologies with the latest Intel Z77 Express Chipset, creating a fantastic motherboard designs that harness the outstanding performance of the new 3rd generation Intel Core processors. With an exclusive 'Digital' VRM design, GIGABYTE 3D Power and GIGABYTE 3D BIOS (Dual UEFI), the GA-Z77X-UP5 TH motherboards ensure exceptional power delivery and absolute control, with additional features that ensure an unrivalled experience on your next PC build.

Pros: Fully-featured motherboard. Has pretty much everything I would need. The LED debug display came in handy for troubleshooting. Overclocking is very easy.

Cons: Bios was a little weird at first, but after getting used to it I do like it. Wish it had a few more USB hookups. Biggest issue: This motherboard seems to require a power supply with a sing 12v rail. I initially had it paired with a TX850M and got it to start once. After that I continually got an error that wouldn't allow the computer to start. Looked up the LED code online and was led to a lot of people with power supply issues. I switched to a Silent Pro Gold 800W and it worked perfectly. Looked further into the issue and realized a lot of people had issues getting this motherboard to work unless their powersupply had a single 12v rail. I used the TX850M with my personal computer and offered my Silent Pro to go with this one, both work great in their new homes!

Overall Review: A very great motherboard. After figuring out my initial issue, everything is great. Overclocked an i7 3770k to 4.8 on air with no problem.

Pros: This is my first Gigabyte motherboard in a while now, and this one doesn't disappoint at all. Works as advertised, looks awesome, and was easy to use as a OSX build. Has plenty of room to expand and grow.

Pros: They say the Empire State building was so over-engineered they could have built it twice as high, that's what this motherboard is like. The power system on this board could be used to start a car, and that's not much of an exaggeration. 400+ amps theoretically to the CPU if you had the power supply to deliver it and a CPU that wouldn't melt. Easiest overclocking board I've ever used. It is rock solid and as I've burned up and corrupted BIOS'es in the past on cheaper boards the dual BIOS feature gives me a good sense of security. Looks beautiful, no ugly, tall and fragile looking liquid caps here, this thing is literally military grade. Onboard ALC898 audio is better than most dedicated sound cards, and supports THX/Creative EAX 5.0. Dual Thunderbolts if you're into that sort of thing, I can't say I have a use for them yet though. Fiberglass PCB to resist moisture and extra thick (2x claimed) copper paths to reduce the risk of flexing the board breaking a circuit, etc. built in mSATA port for SSD's

Cons: Fan headers are NOT all PWM despite all being 4 pin connectors. According to the motherboard manual only the CPU_FAN, SYS_FAN2, and SYS_FAN3 headers are true PWM (pulse width modulation). SYS_FAN1 is voltage controlled only and SYS_FAN4 is a pure 12v with no speed control. The manual also claims that all the headers have fan speed monitoring, but they don't all show up in Hardware monitor. I was only mildly disappointed to find this, as I have only 1 PWM fan at the moment anyway.. but I had hoped to be able to convert my entire system to PWM eventually for quieter running and to appease my OCD about having different fans. I too have the "Power Surge on Hub Port" issue with one of the USB ports/controllers. This is only a mild annoyance though, as I can disable the popups in Windows and from what I can tell it doesn't effect the operation of any of the ports at all. (I have a sneaky suspicion that the issue may be related to the included WiFi/Bluetooth card since the bluetooth controller doesn't interface through the PCIe slot but rather an external cable running to the USB 2.0 header. I haven't taken it out to test it though, as it really isn't even that big of a problem.) Could do with a third USB 2.0 header for things like card readers and front panel ports with older cases.

Pros: -most everything you could want out of a mobo -stays way cool, supports loads of case fans if you really need it -z77

Cons: -my first one was DOA. shoddy QC? -side-facing SATA ports are a little hard to work with inside a case. if you want to move anything around you pretty much have to unplug all your drives and start over

Overall Review: While my first one was dead on arrival, and set me back almost three weeks in serving a client, the second one was as it should be. To the credit of Gigabyte's customer service, i spent zero time on hold when troubleshooting the board with them, and was connected to the same technician each of the three times I called. Strong job.

Pros: This board actually has a lot of good things going for it. Unfortunately my board started crashing my system after 1 month of use.

Overall Review: When my board was delivered, it looked as though an animal had torn the box open. I felt a little uneasy about this thinking that I had been shipped a "refurbished" unit. Regardless, I installed it and everything worked great for about 1 month. Then Windows 7 began crashing with BSOD informing me of hardware failure. Through process of elimination by swapping out my other components, I traced it down to the motherboard itself. Of course this happens THE DAY AFTER my 30 day return policy with Newegg expired. Please understand that my 1 egg review has nothing to do with Newegg or Gigabyte as a company. I believe that Gigabyte is a great company that makes great products. I just happened to get a bad motherboard. It happens. The 1 egg is for the one specific board that I received. I'm going to try to RMA with Gigabyte. Hopefully I'm not stuck with a $240 paperweight.

Manufacturer Response:
Thank you for your comments. Honest and constructive opinions are always welcome. We apologize for your difficulty with your Gigabyte product. All Gigabyte motherboards carry a 3 years warranty. We will be glad to honor all warranty defects. GIGABYTE VIP Support Team
Eric L.
Ownership: 1 week to 1 month
Verified Owner
Durable, Reliable, gigabyte12/10/2012 5:49:59 PM

Pros: Honestly can’t go wrong with a gigabyte board, this is my 2nd gigabyte my first one was in the first generation core duo’s. I love the features that gigabyte has the dual bios just in case you damage your bios you can still save the system. I’m currently waiting on thunderbolt peripherals but I just saw a report showing how dual thunderbolt ports can power a 4K display and only gigabyte (from what I’ve seen) has dual thunderbolt. Once you open the box you feel the difference the board feels durable, not flimsy, after you place or when you’re trying to place the fan on it the board doesn’t seem like it is being stressed. If you are looking for a board for an 1155 socket CPU look no further this is a perfect board for all you may need.

Cons: Don’t know what to put here, it has everything I need mSata, and IR Mosfets for better heat control.

Overall Review: Best Board in the market so far.

Pros: Great Motherboard! All components are of quality and are well supported in Linux. It's hackintosh friendly if that's your thing. No fuss motherboard with everything I needed. Pleasant build experience.

Cons: Bluetooth is powered by USB header (Not a problem if you want to use the proximity Bluetooth function for Windows just use the always-on port)