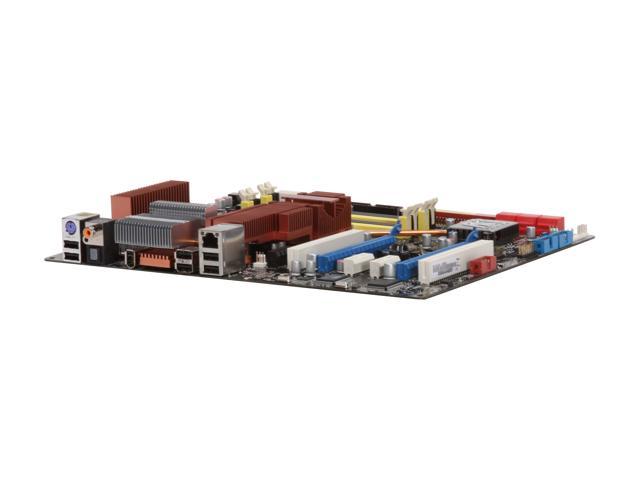 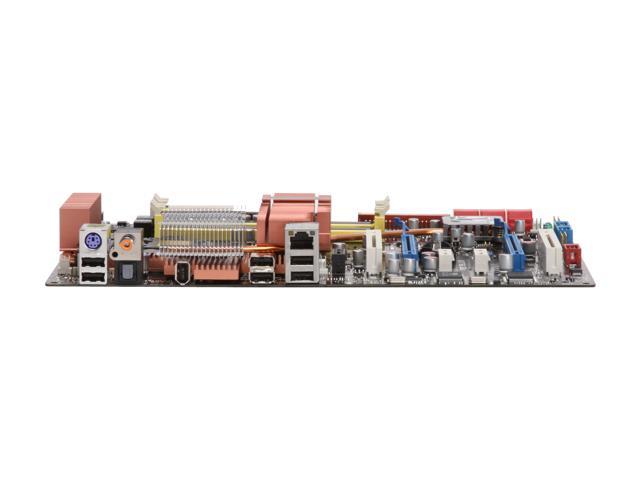 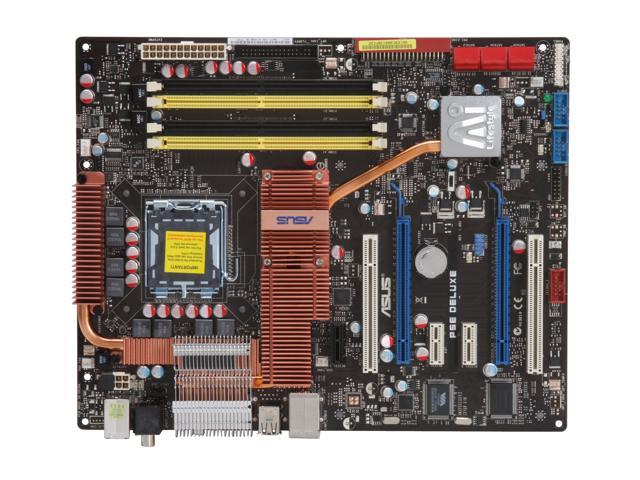 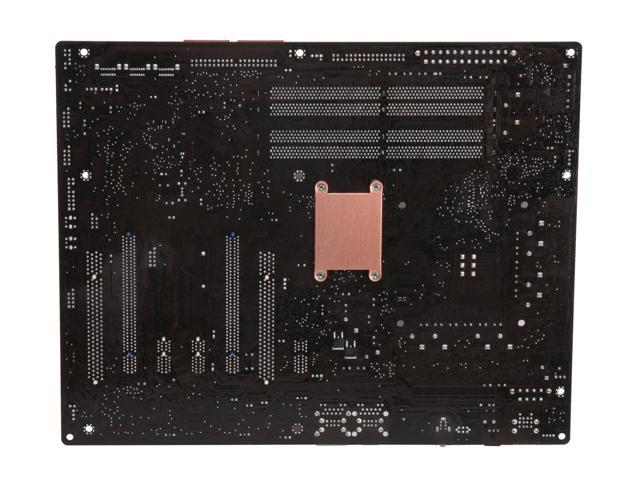 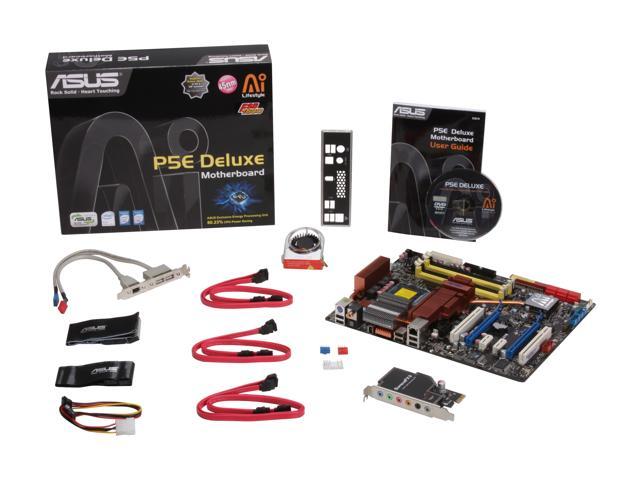 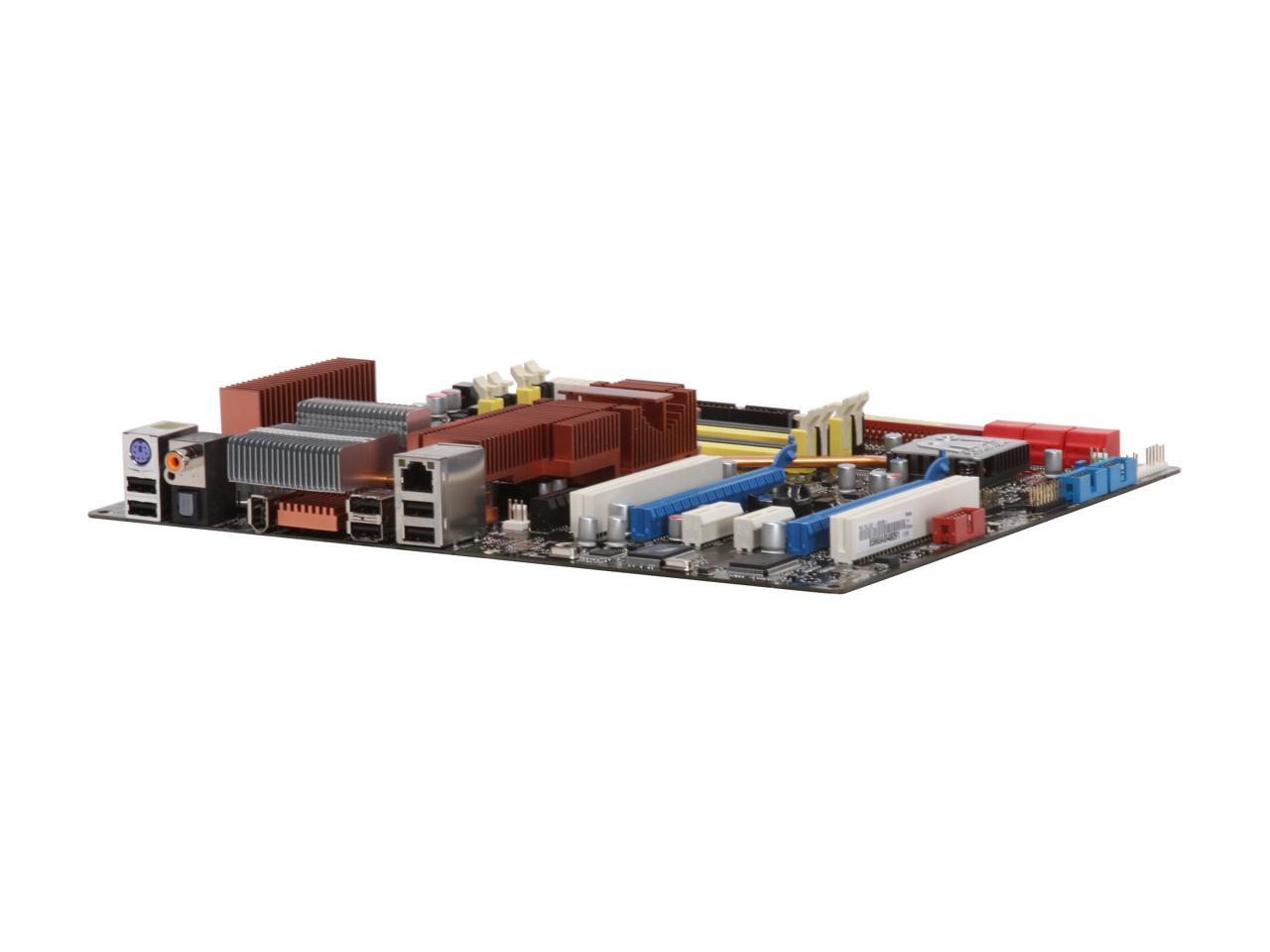 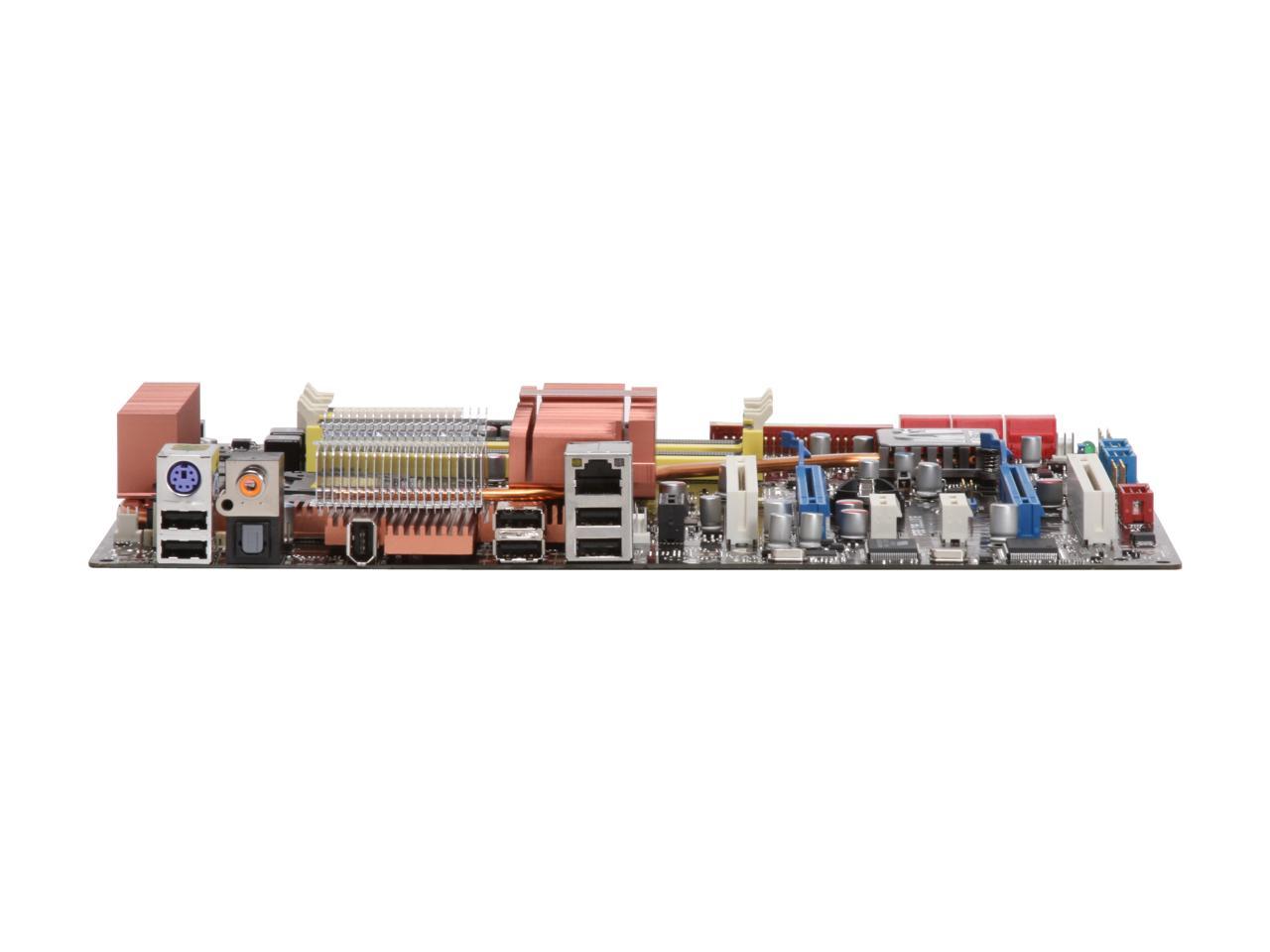 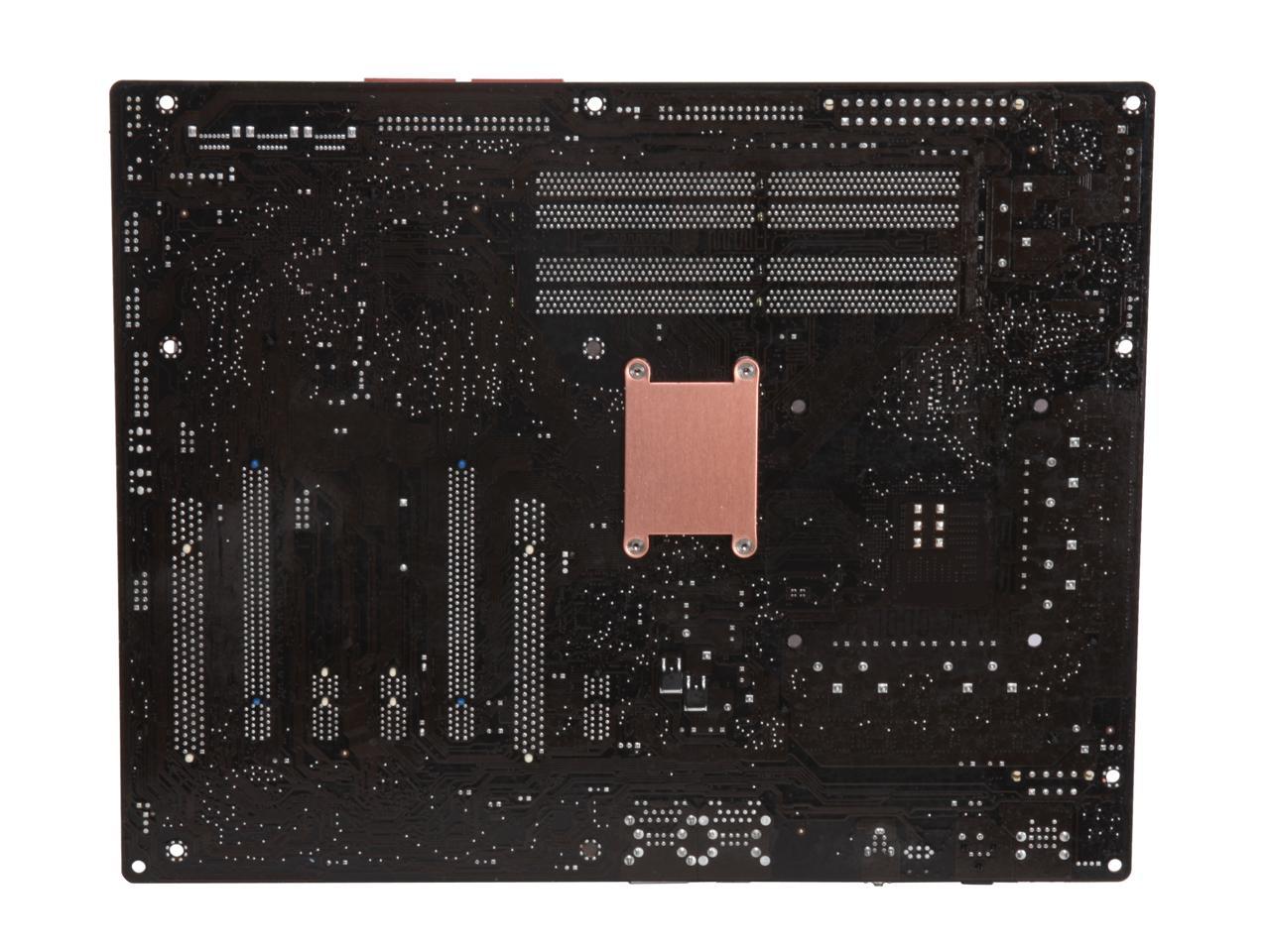 (95) Write a Review
OUT OF STOCK.
Specs
Reviews

Pros: After some debate on whether I should this board, the P5E or the Rampage model, I believe I made the right choice. This board uses the X48 chipset rated for a 1600 FSB The P5E is based on the X38 chipset which is only "officially" rated at a 1333 FSB. The rampage is more money and offers a few more bells and whistles that I'll never use. For example, do I really need two Ethernet ports. Also the rampage offers more onboard fan connections verses the deluxe, but it turns out most of my fans connected to the power supply - not the MB. I only used the MB for CPU and 1 Chassis connection for my Memory Fan. I used this MB in combination with the Antec 900 case, Antec 550W PS, Q9550 Intel CPU, Artic Freezer 7 pro fan, 8Gb Corsair Dominator mem (w fans), eVGA 9800 GT video card, (2)750G hard drives, 2 ASUS optical drives and media card reader. Everything went together very well. The Artic 7 pro fan barely cleared the heat sinks on the MB, but it did fit by a hair without any mod

Cons: SATA ports face the rear of the case. There is not alot of room to connect the SATA cables, especailly after you run all the wires/cables for the rest of the system which usually run behind the board. The connections still worked, but not the most efficient design. Not big enough of a problem to not buy this board. You might want to connect your SATA cables before running your other cables to make it easier. I even ran an additional cable that is unterminated just in case I add another component later (I wont have to worry about the MB connection) No other down sides that I can think of. Board came with 6 SATA cables, a small fan, IDE cables. There is connections for case power and reset buttons, HDD led, and small speaker for boot verification. (speaker does not come with board, so if you want to hear the PORT beep, need to get one). The board also comes with software that can monitor the board temps, but don't it... its not accurate. Use "Coretemp" or "HWmonitor" freeware

Pros: Great board. Got my q6600 up to 3.3 stable right away. I had purchased corsair dominator, 2x2 gig 1066 ram and had the speed problem at first. I flashed the newly updated p5e deluxe bios on to it and it runs great. Very Stable. x48.

Cons: Im a noob at flashing bios, ez flash 2 said the rampage rom i had dl'd wouldnt work. NB + SB run a lil hot, not a problem if u have good airflow.

Pros: Received this board and noticed the P5E deluxe marking on the board was actually a sticker covering... you guessed it a Rampage Formula. This is in fact the Rampage Formula board minus a few features. If you flash to the latest Rampage Bios it is essentially the exact same board. If you want to pay the extra $70 for the cool buttons and extra Ethernet port and the LCD poster go ahead. I love having the best for less. Newegg rocks!

Pros: I have had no troubles with this little baby... First thing I did was flash the Rampage Bios on here, then built the raids (raid 0,raid 1), then put on vista x64.... The Onboard Intel Raid is very impressive... very impressive... you should disable the Jmicron stuff, it will skip that part of the boot...(assuming you're not using it of course) It was was giving me faster hdd times than the 3ware 9650se raid card I ordered, so the raid card went back and I'm happy with this onbaord... Rampage bios is a must have if you want to O.C. I was able to really tweak the voltages and memory... Can't comment on factory bios as I never used it.... I'm using the 8 pin power connector, so if your ordering a PSU too, make sure it has that...

Cons: Sata ports are sideways and stacked, making locking sata plugs useless... (you can't use them without jamming them in there...) No eSATA

Overall Review: My specs: This Board, e8500 @4.00ghz with Zalman 9700. Dual 150 gb Velociraptors in Raid 0 (64kb stripe), two seagate 750 in Raid 1. 8gb of Corsair Dominator 1066 DDR2 with the fan, 2 Lite-on sata dvd drives, EVGA 9800GT, Avermedia TV tuner, Lian Li PC60B-Plus II case, Thermaltake 700W PSU. To the guy who can't get his Corsair Dominator 4 gigs of 1066 working... I plugged all 8 gigs in mine and set the timings and voltages and frequency in the bios, and voila! I have 1066 ram working just fine.... So perhaps you should research more before you bash in this board... Plenty of others are using that Ram, so don't you think the problem may not be with the board.... ?Sometimes after 15 years, you forget that human errors do occur... are you installing 32 bit? try with one stick on install, that seems to be the most common issue... Is you're BIOS all updated? I don't see how some of us can get it working and others can't ??? Thats not the boards fault... just my 2 cents

Pros: The P5E Deluxe is a Rampage Formula plain and simple. It is very easy to flash this board and make it a Rampage you just need to search the web. Here is what I found out, the memory dividers on the P5E Deluxe are borked. Running my E8500 at the default speed would allow me to run my corsair ram at 1066 but if I bumped the FSB to 1600 and set the memory to 1066 memtest would fail in less than 5 minutes. I know the CPU was not at fault because at if I set the memory to 800 and left the fsb at 1600 I can run prime 95 for days. So using all the same hardware I flashed to the rampage 0408 bios now my memory at 1066 passes memtest with a FSB of 1600.

Cons: My guess is the P5E Deluxe bios is Purposely borked for overclocking by Asus because the board is 80-90 dollars cheaper than the Rampage. By this board and flash to a Rampage and your golden.

Overall Review: I hope this helps someone out who is having issues with this board running there memory at 1066. It is just a bios issue not a hardware issue. This is a rock solid board just a flakey bios.

Cons: none at the moment

Overall Review: the reasons i upgraded from the striker extreme motherboard was for compatibility.. the striker wasnt able to hold a steady overclock with the q6600 and 8gb of 1066 ram.. so i had to switch to something newer.. the striker is a great board if your just overclocking a dual core and only have 4gb of ram.. but if your trying to double up get this board and max it out it'll take whatever you throw at it.. another thing that had me upgrade was using the 4870x2 now so it has cross fire support instead of tri - sli.

Cons: It's a CROSSFIRE board, with an Intel chipset, so no SLI (this sounds like a no-brainer, but it surprised me) No on-board VGA The aluminum part of the motherboard heatsink feels rather flimsy, worried about fitting a Zalman cooler on my CPU later The real kicker here is cost vs features, with it being a legacy-free board with no video chipset, I can't figure out why it's $50 more than the ASUS sli board with a nvidia chipset. This is what cost it the egg.

Overall Review: Very happy with the board, though, all in all. ASUS quality is awesome. I mean, who else throws in a free liquid cooling fan with their motherboards? So it's my fault for not reading adequately, but SLI is only possible on Nvidia chipsets, far as I can tell, whereas Crossfire is possible on both Intel and ATI/AMD chipsets. Native DDR2 1066 without a voltage adjustment was nice the AI Nap mode is a great power-saver, it's like hibernation at the speed of sleep. System: Intel Q8400 @2.8 GHz 4 GB (2x2) G Skill dual channel DDR2 1066 kit Asus Geforce GTX260 (core 216) Nvidia card Antec Earthwatts 650watt 80+ PSU Seagate Barricuda 500GB 7200rpm sata hdd

Pros: I have read other reviews that stated missing parts and non-functional boards seemed to be the normal expectation. I didn't read the reviews until I purchased the cpu/motherboard combo. I have always purchased asus m/b's and I have never encountered any problems. After a few hours of assembling the computer, neatly organizing wires, and downloading hundreds of windows updates I have found nothing less than a high quality product once again. All parts are accounted for and functional.

Cons: Nothing noticed..... well, it would be nice to push a button and the computer would be reconfigured automatically.