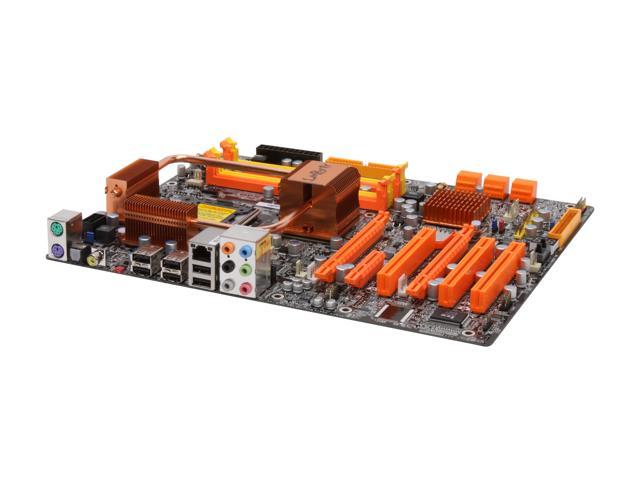 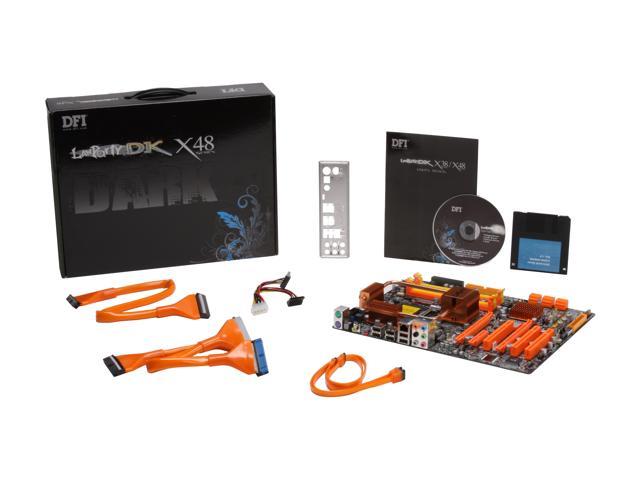 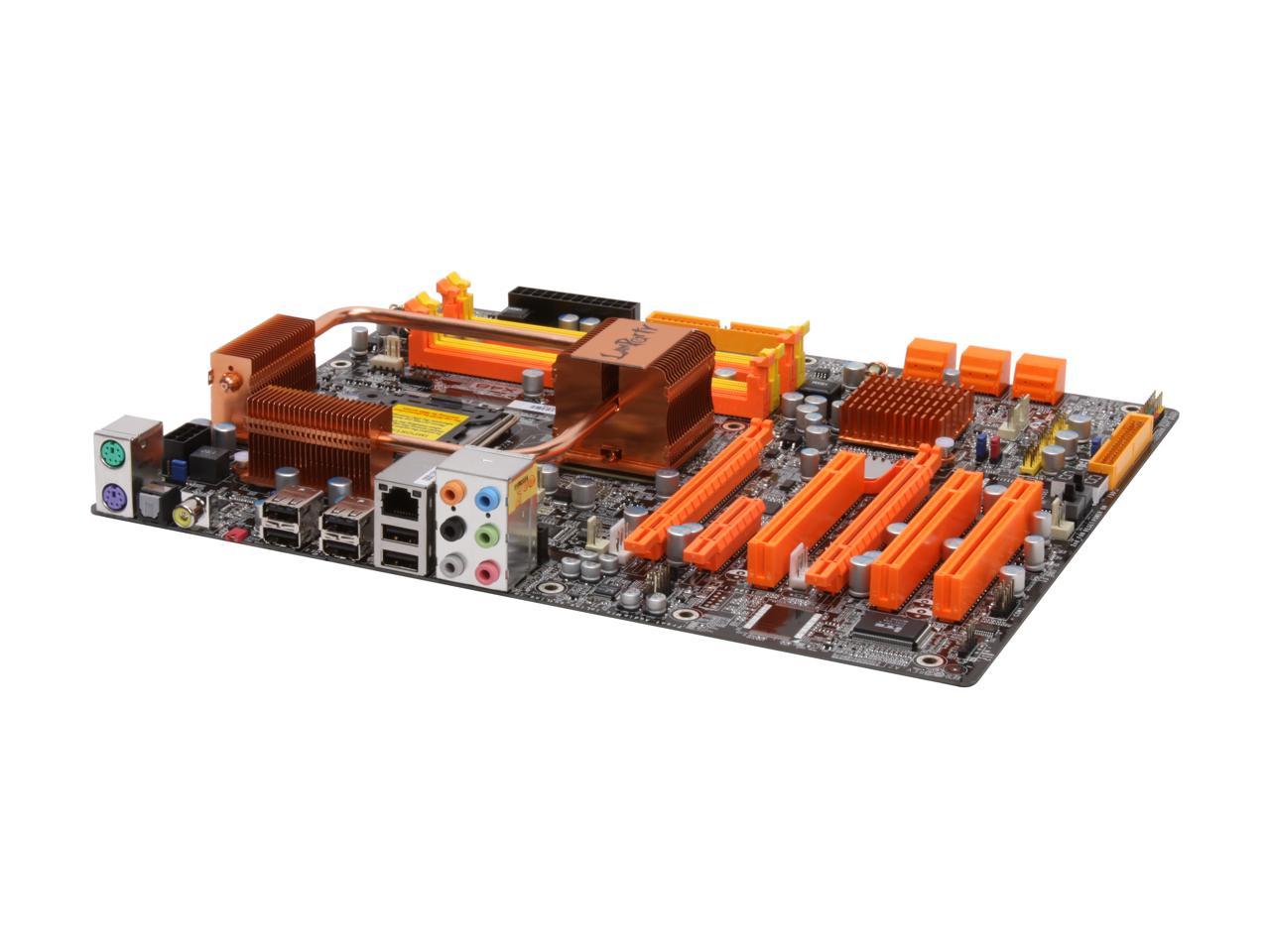 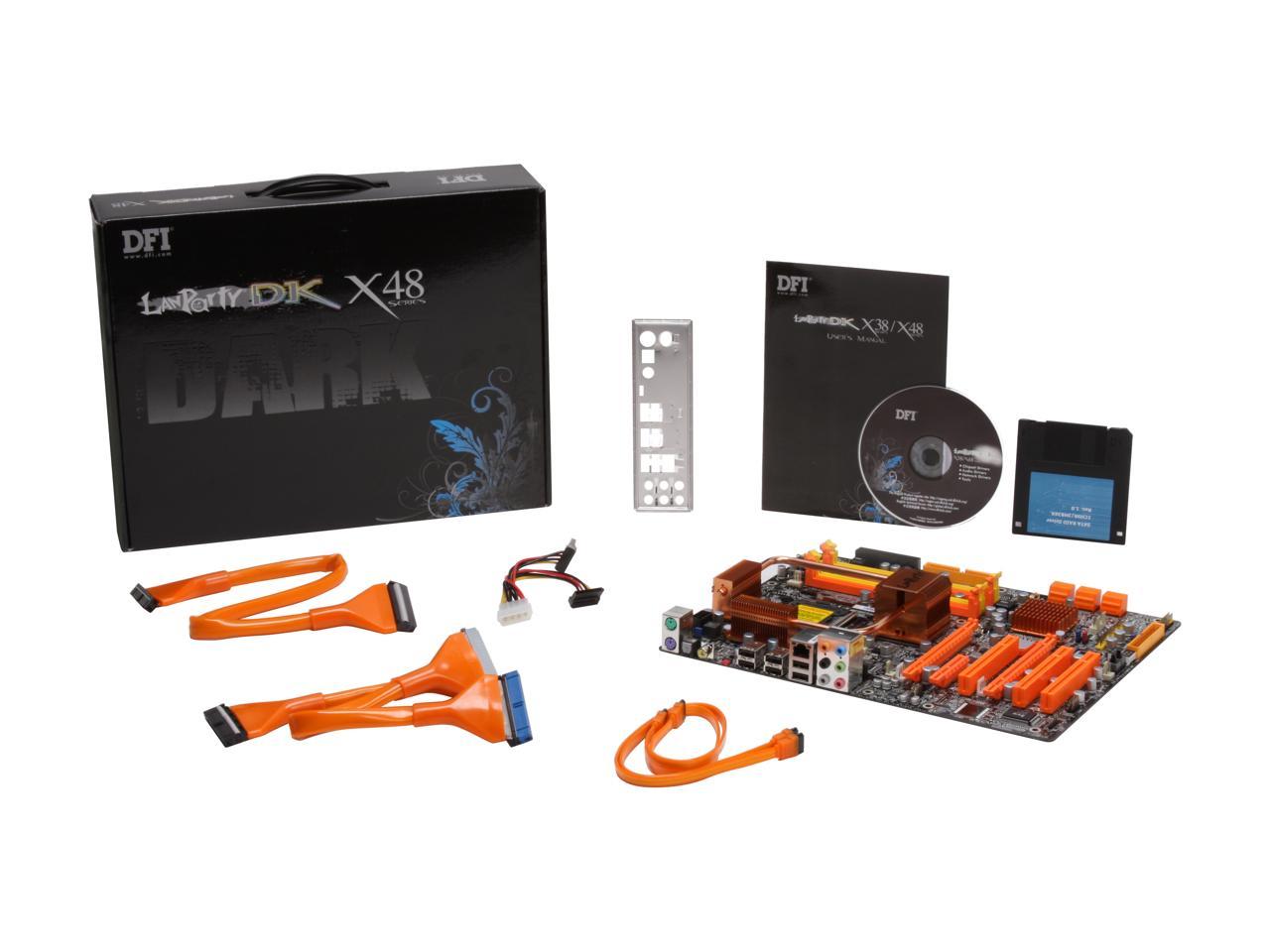 (51) Write a Review
OUT OF STOCK.
Overview
Specs
Reviews
DFI has long had a notable reputation within the overclocking community and their DK X48-T2RS motherboard continues the trend. Based on Intel's X48 Express and ICH9R chipsets, this ATX board is ready to host the latest LGA775 Core2 Quad and Core 2 Duo CPUs.
Up to 8GB of DDR2 1066 can be installed with dual channel support, SpeedStep and Hyper Threading technology providing increased performance. Additional performance – up to 1200 MHz – can be achieved through overclocking with DFI's Auto Boost System. A pair of PCI-Express 2.0 x16 cards can be mounted for cutting-edge graphic power with support for CrossFireX.
Get eight channels of HD sound from the Realteck ALC885 audio codec with a Bernstein audio module and full-rate lossless technology for pure audio. Connect up to six SATA devices at 3Gb/s for high-speed data transfers as well as the option for multiple RAID configurations. Integrated Gigabit Ethernet LAN allows bottleneck-free connections to other network devices at broadband speeds and a half-dozen USB 2.0 ports along with a FireWire connection allow for nearly unlimited possibilities in connecting peripheral devices.

Pros: As of the 1st week of May, a lower priced X48 than competitors. Tons of memory timing options as expected. Reset and Power switches on motherboard are great for testing before installing it in case. Limited information in user's manual - refer to website for memory timing and advanced setup. Worked great with 8GB Corsair TWIN2X4096-6400C5 R. Didn't require any tweaks to BIOS - just read SPD values and ran at specified timings. Tested with Server 2008x64, Vista x64/x32, and WinXP_SP3 and no issues. Irregardless, never had stability issues and PATA drives seem to work fine.

Cons: No 1394 connector or external jack. Very bare bones kit: only 2 SATA cables, 1 FDD cable, 1 PATA cable. As other reviewer stated, they're not very flexible. The SATA ports pointing towards the front of the case are annoying and difficult to use. To insert the SATA cable i had to remove the HDD bay out of the Antec P182, then it was easy. No conceivable benefit over X38 chipsets. JMB368 driver is on floppy, but didn't always install well with Vista/Server 2008. Most video cards and definitely double width video cards will block the PCI-E X4 slot, so you most likely won't be able to use it. HD Audio jack is also poorly positioned by PCI slots. Two empty USB headers without any additional cables/external PCI covers provides so plan on having some on-hand or buying them if you need more USB ports. If your case can use all three you're covered as well. The P182 only uses one.

Overall Review: Zalman CNPS9500A fit horizontally and the push buckle just barely touches the heatpipe one the side towards the front of the case. It's pretty much the only direction it will go without issues. E8400 works fine with it. Have NOT tried on-board RAID, but it's the tried and true ICH9R chipset so I wouldn't expect issues.

Pros: Man, Where to start? It was easy to setup. The Bios are are easy to after getting the manual the DFI website. It OC my E7200 to 3.0ghz with no problems. The crossfire works great with my 3650 ATI x2. It has lots of hookups for fans.

Cons: The only really cons are the sata hookups and the audio hookup. Hook up the sata cables first and then put in your harddrives. Do the same for the audio before putting in your video card(s).

Overall Review: When overclocking the CPU it does your RAM for you. Let it. My ram is at 1022.

Pros: CMOS reloaded allows for different bios config saves in several banks. This keeps a bios config you can load even if you have to clear the working bios. Awesome for overclocking or working out compatibility issues. Also there is access to clear the bios without opening the case! Tons of timing and voltage settings, reset and power buttons to use it outside of the case, etc....overclockers dream!

Cons: The manual is just about useless, it really is the worst one I have ever used (over a decade of build experience). I ended up using an old Abit manual to make sense of the LED codes since the manual did not have them!! Luckily it looks like the Award Bios uses pretty standard codes. Ex) C1=memory error.

Pros: Overclocking is dead simple. Back panel CMOS reset is nice for testing. Everything stays cool (under 50C) with no extra fans in my case and my Q6600 overclocked to 3 GHz.

Cons: Audio pins are practically under PCIE1, which made for a tight fit. No FireWire. Rounded cables aren't at all flexible, but I didn't need 'em.

Overall Review: Haven't messed with the onboard RAID.

Cons: bundle not too tough. but this is a "dark" series board.

Overall Review: had a feeling that i could overclock my cpus higher than my nf78 (another terrific mb) would go. i was right. higher oc at less vcore. nb runs a tad warmish, but i have to get some air moving over it.

Pros: did alot of looking for a mobo for my new build. I wanted to run e8400, without a bios update, this board does just that, also recognized my SATA-dvdrom and SATA-HD. came with all teh latest network and sound drivers. and posted frist try woot!

Cons: my 9800gtx would not fit with the front audio headers connected, so I took an egg for that cause it would have been nice to have that. the stock fan for the e8400 is kind of tight fit had to run the wire along the heat pipe and heat sink a little

Pros: Opposed to the previous reviewer, I talked with Tech support over several conversations. At first I thought that an e-mail form was bogus and a scape-goat for DFI, but when I actually talked to someone, within 48 hrs, I had all my questions answered better than any other tech support department that i've talked to in the past.

Cons: The boards manual would be a book if all the BIOS explainations were in it, seriously. You'll end up doing some forum searching if you do not have years of experience overclocking and/or modding BIOS's. ICH9 has issues with RAID and SATA CD/DVD's autorun/disk validation, I've been told that using the last two SATA ports for a SATA CD/DVD might fix this issue.

Overall Review: The BOARD is Solid, DFI could have put some more time info ensuring the NB is cooled better, but that is what 40mm fans are for. The board is SOLID and a good overclocker, and thats what I paid for.

Pros: Lots of bios options. Stays cool. Looks good. Stable and easy overclocker. Layout was awesome and easy to set up. Booted with no problems.

Overall Review: Took my quad to 3.2 very easily. There is minimal vdroop. The options in the bios can be overwhelming but you will get used to them, also things are not labled as they were in other bios if used so it may add to confusion for some. All around great bored want to see how much i can push my quad with this.