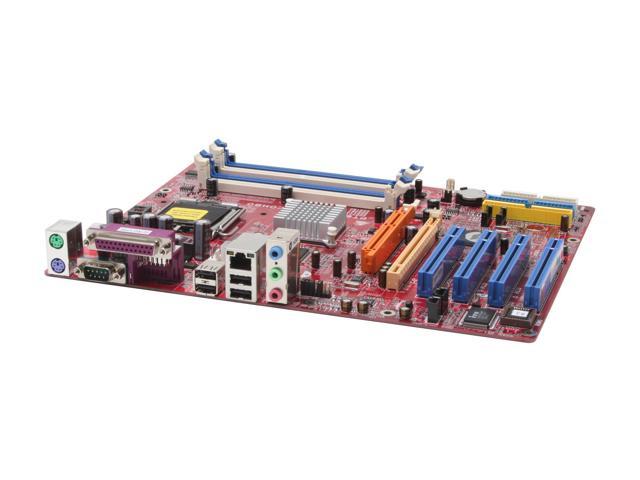 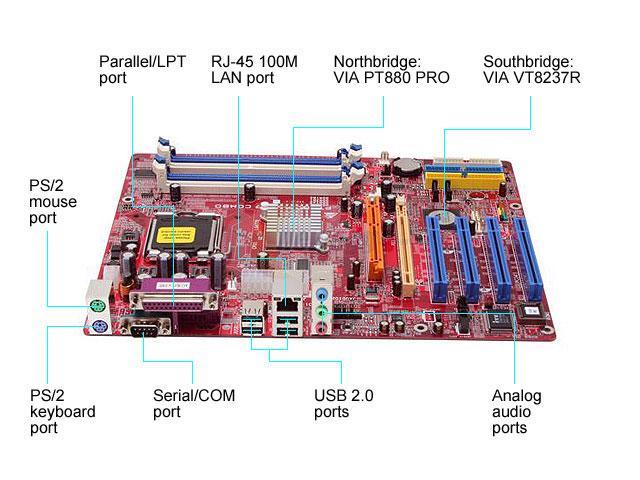 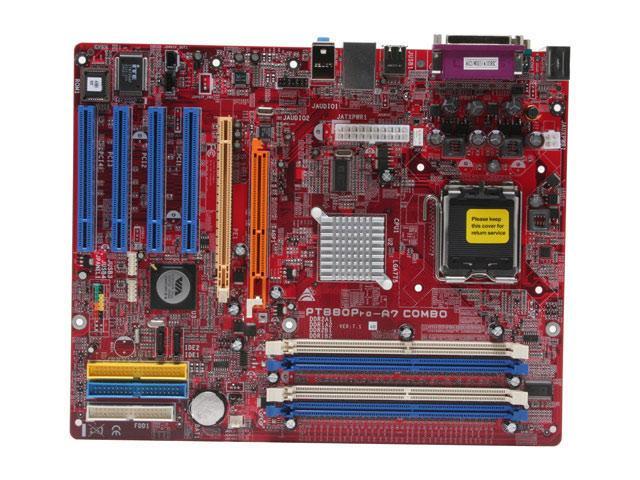 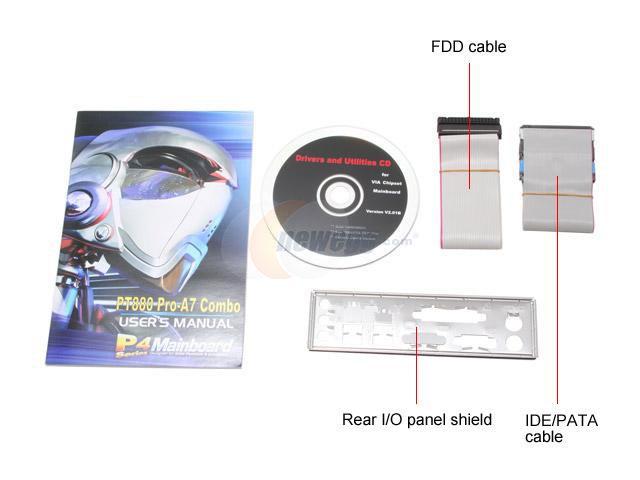 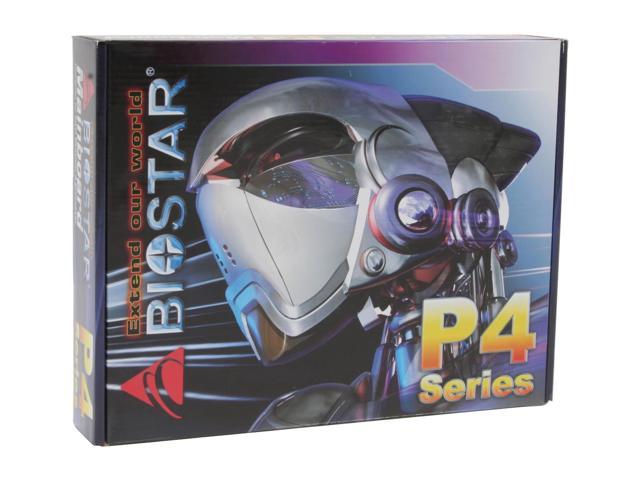 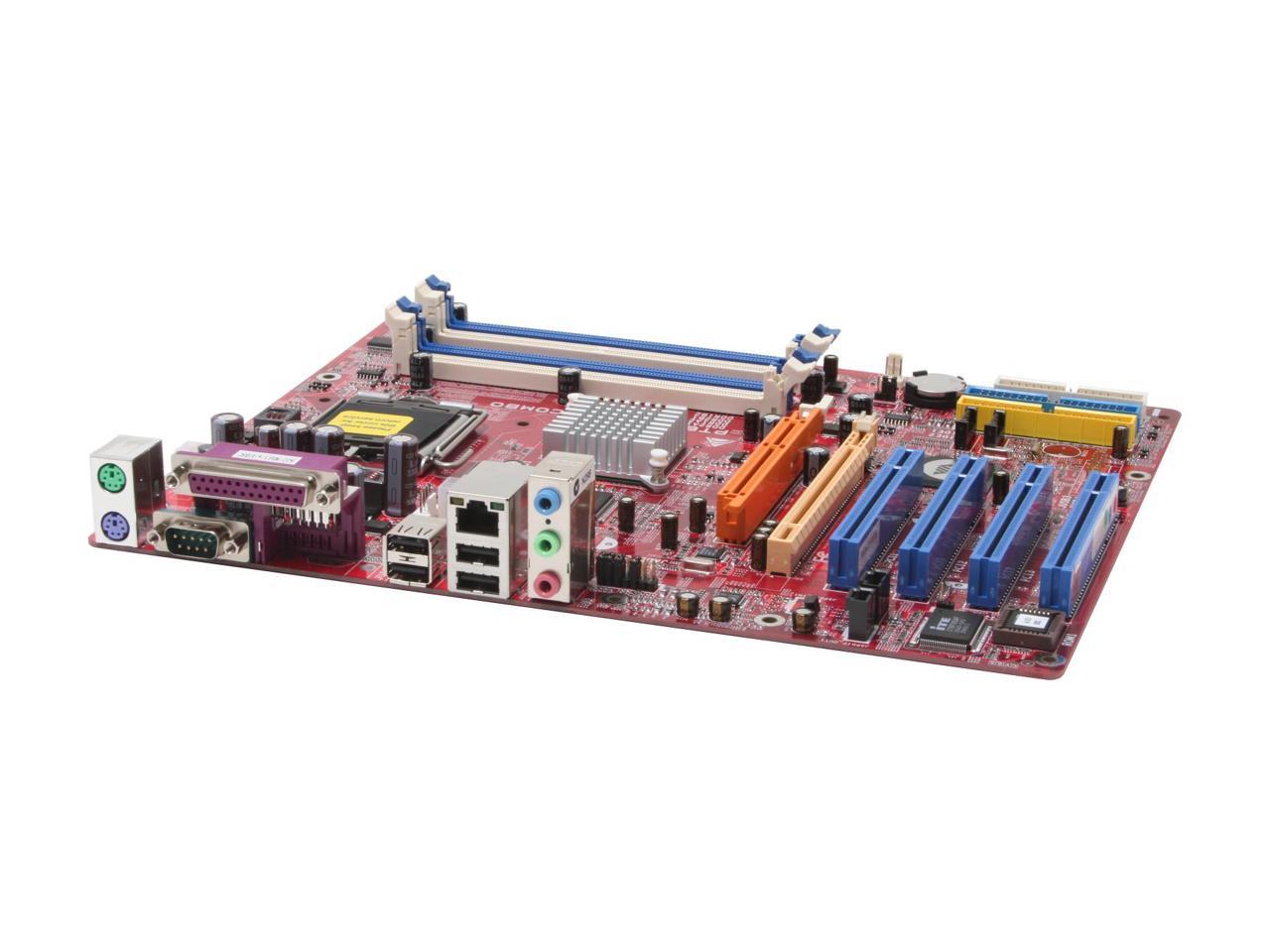 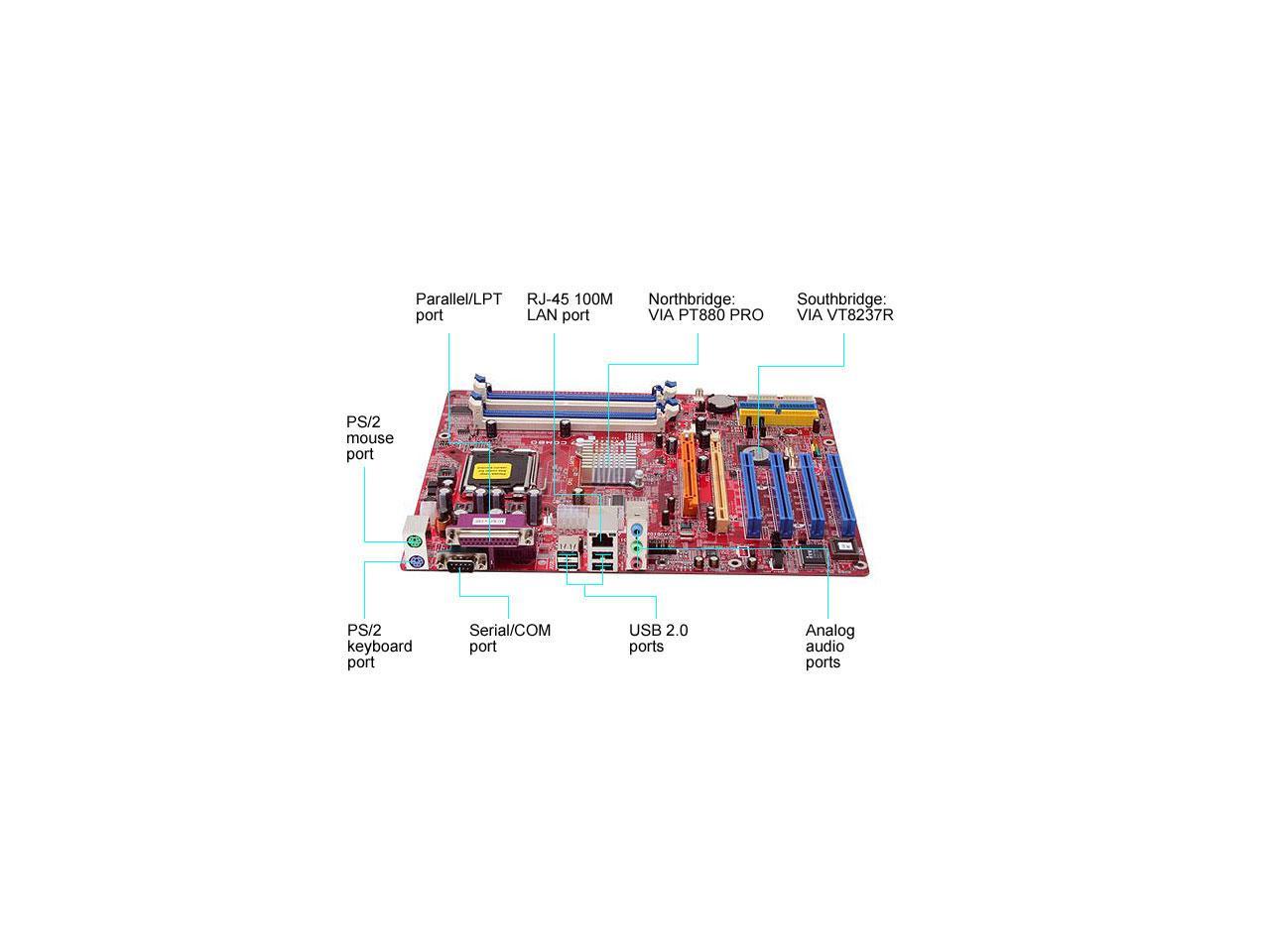 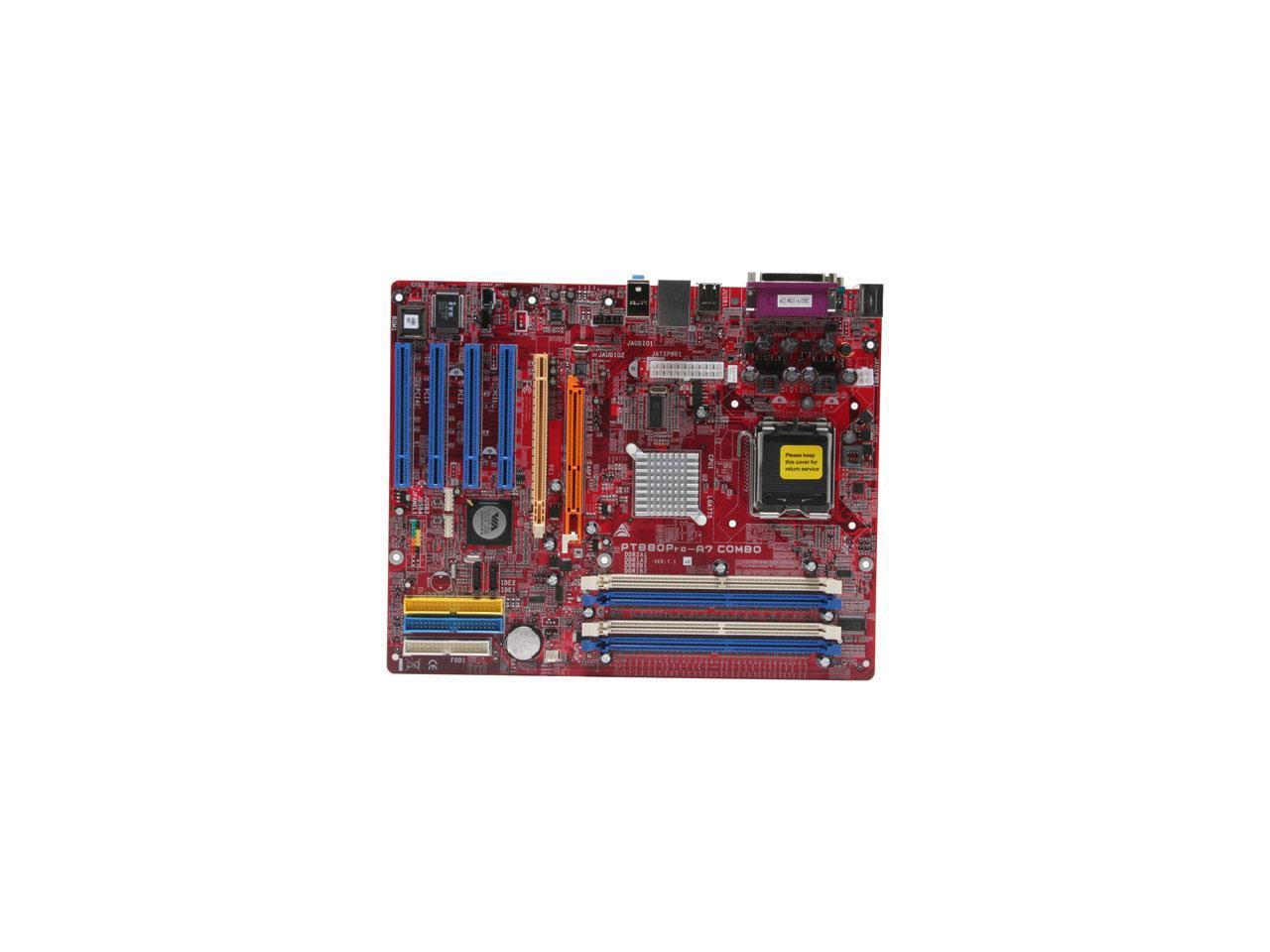 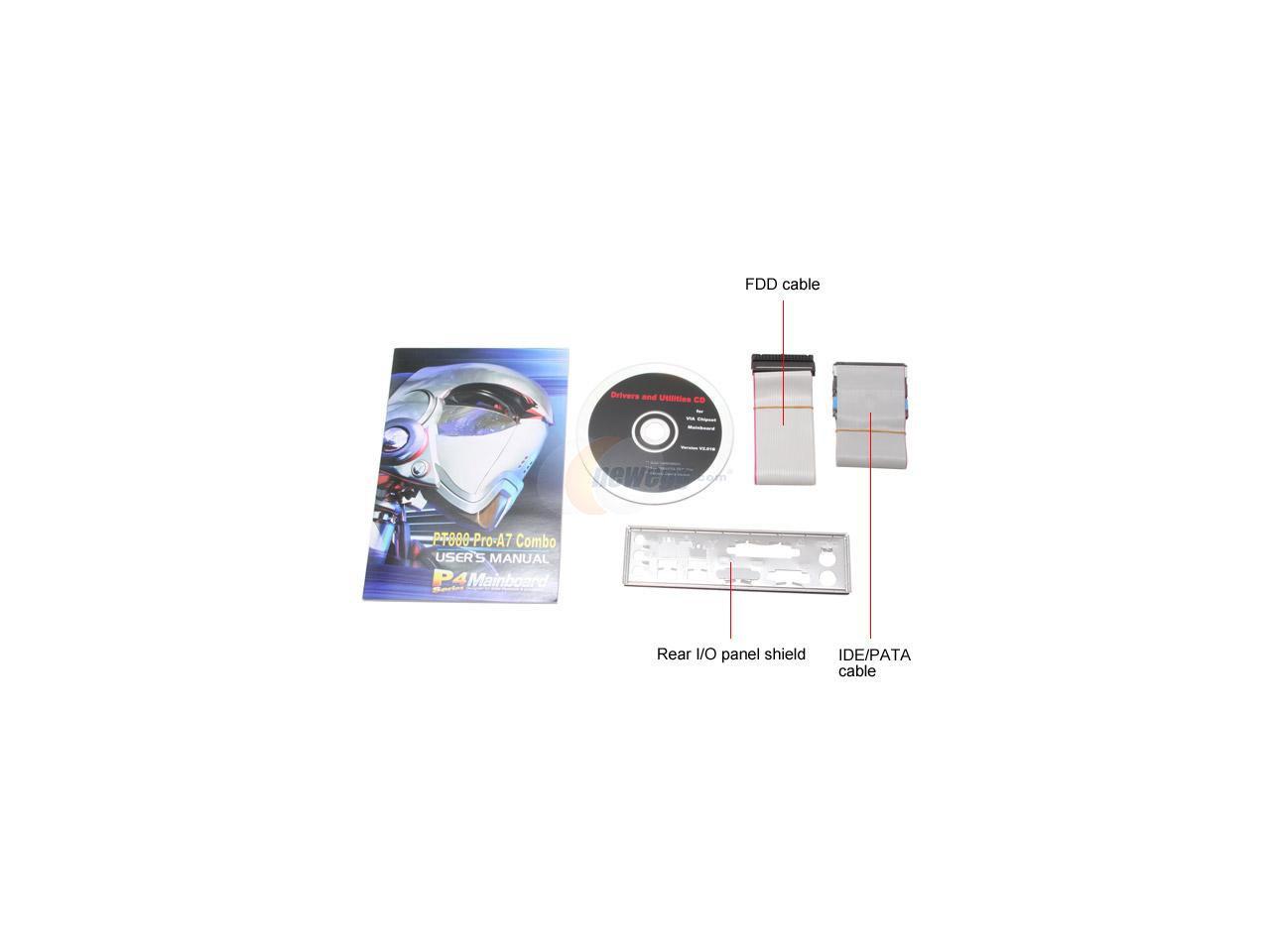 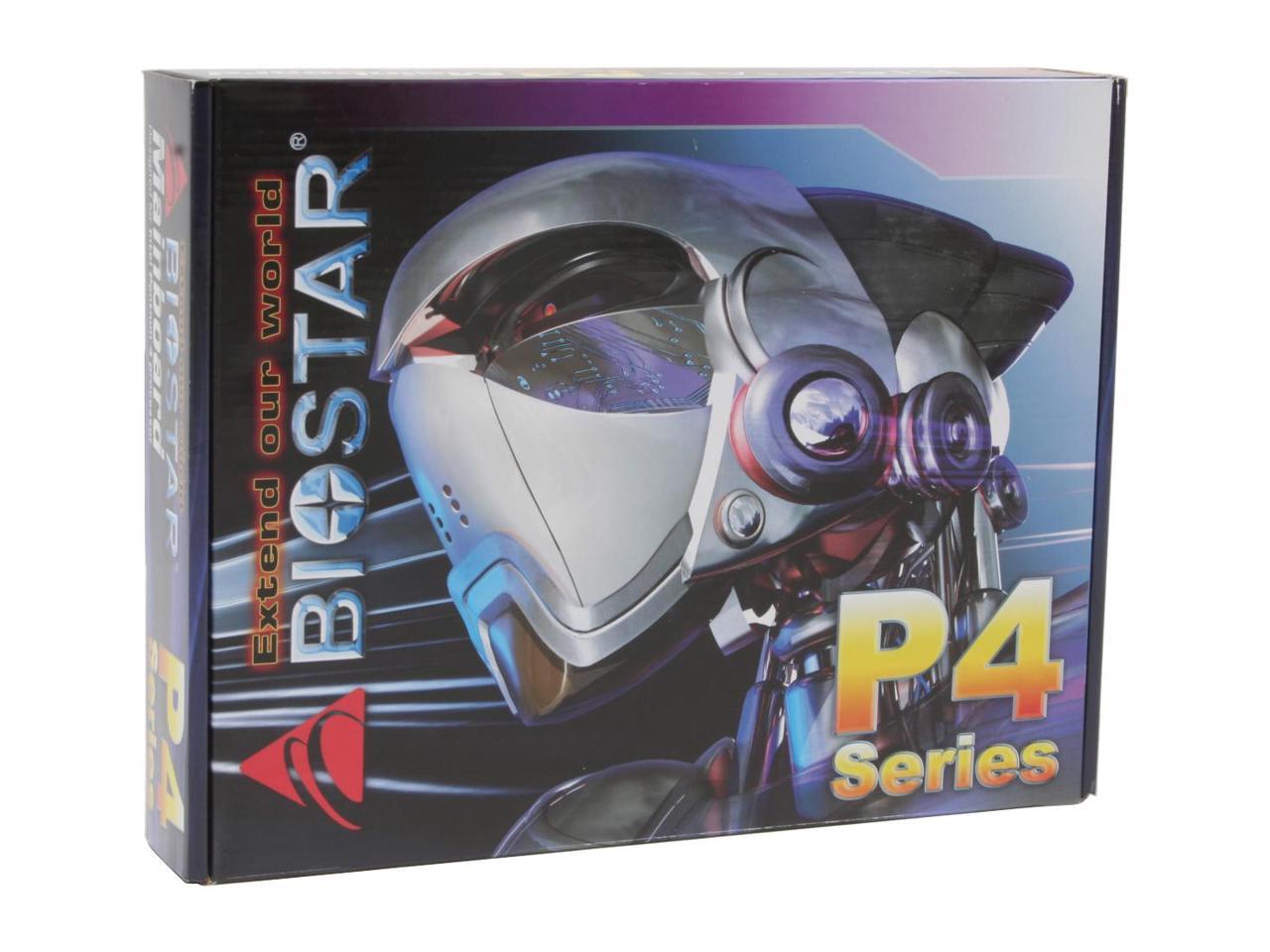 (27) Write a Review
OUT OF STOCK.
Overview
Specs
Reviews
For superb performance from an AGP-based dual core system, the Biostar PT880 Pro-A7C provides a powerful choice. This motherboard supports an Intel 800/533 MHz FSB Pentium 4 and Celeron D processors, features a dual channel architecture, and provides two DDR2 533 slots and two DDR400 slots for maximum muscle. With 2 GB of memory capacity, and 4X/8X AGP slot, this motherboard is ready to be tweaked into the gaming or multimedia machine you need.
You can also add a high-end PCI-E graphic card (courtesy of the PCI-Extreme slot) to take the load off of your CPU for seriously extreme graphics performance. The on-board VIA VT6103 LAN chipset provides speeds of up to 100 Mbps, for solid LAN control, and the Realtek ALC655 audio chipset, provides 6 audio channels for superb sound performance. Eight USB 2.0 ports make sure you have connection for all your peripherals, and three expansion slots (3 x PCI), and four ATA connectors (2 x SATA 1.5Gb/s+ 2 x PATA) mean you have enough connectivity for any requirement. This is a solid and powerful mobo from Biostar, and ready to go to work (or play) for you!

Pros: Motherboard booted right away, no problems, the BIOS was easy to use along with the overclock features.

Cons: The PCI-E x16 slot that the board comes with is not a PCI X16 slot. It is an x4 slot in disguise as an x16. This has brought me no end of grief, while trying to figure out why my video card kept crashing in games. Within windows everything operated fine however.

Overall Review: I just wish it was more apparent that the X16 slot on this board was not a "true" PCI-E x16

Pros: This board truely is the transition from New to Old technology with the ability to either have DDR-2 533 or DDR 400, AGP or PCI-E. This board is like the Jeep Of cars, its rugged and can hadle ALOT, Gret BIOS, easy instructions Great board layout, went in without a hitch, BIOS features are great tons of settings and easily layed out.

Pros: Everything you need to gradually upgrade a budget PC into something worth having.

Cons: With the case I got, the IDE cables were atrociously long and got in the way of putting the drive in.

Overall Review: The board is definitely sturdy. While putting the large heatsink on, I felt like I was going to break the board with the amount of pressure, but it didn't even show the slightest signs of stress.

Pros: Cheap, nice layout, good option for someone not ready to do a full upgrade as it uses both old and new tech. One of the few mobo that supports socket 775 and DDR memory. Also supports DDR2533 and both PCI-E4x and 8xAGP.

Cons: This board uses a "PCI-Extreme" slot which will accomodate a full size pci-e 16x card but will run at 4x which is no better then 8xAGP. Not good for gamers as this is a serious bottleneck.

Cons: sound is alittle odd, when playing music on windows media player, and i open another program ittt ssstttaaarrrtttsss ttttoooo gggooo llliiikkkeee ttthhhhiiisss. kind of annoying. and the overclocker for it, once it goes up 2 Mhz it crashes (pentium 4 630). i cant click the overvoltage button either. i forgot the first time when i was installing windows, since i had a sata hdd, had to change it in bios from raid to ide. putting boot up/bios password on disables most of the bios options.

Cons: The first mobo I got was DOA. No video was displayed. I hooked the speaker up, but it made no POST signals. I returned it to Newegg, and they sent me a replacement within a decent timeframe. The second mobo I got came with a corrupt BIOS. It required a floppy diskette to boot from, and since I didn't have a floppy drive, I had to go out and buy one. Why couldn't it just use the optical drive I had installed? Well, after flashing the BIOS, things seemed to work well. It might not sound like much hassle overall, but for me, it was. I spent way more time than I should have because of the problems with this mobo. Proceed at your own risk.

Pros: The Color is Nice

Cons: 1st Board Came defective (CPU Fan header and Memory slot). I rma'd it and newegg sent a brand new replacement board. The next one sent was even worse (Bad CPU fan header..again and No boot at all) I tested all my components in my spare computer and it is definately the board. Also, Biostar has no tech support whatsoever it was really embarassing called 2 seperate days and literally got the same tech who barely spoke english and had absolutely no in depth knowledge of his own product.