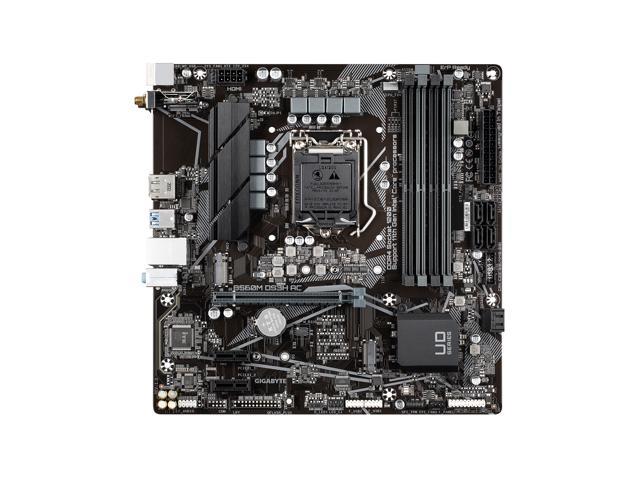 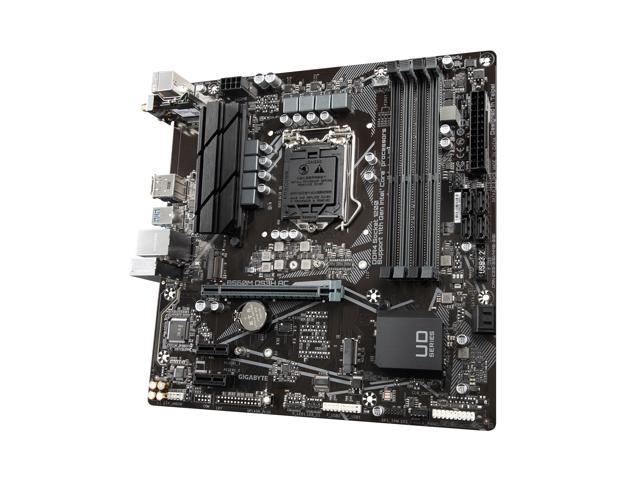 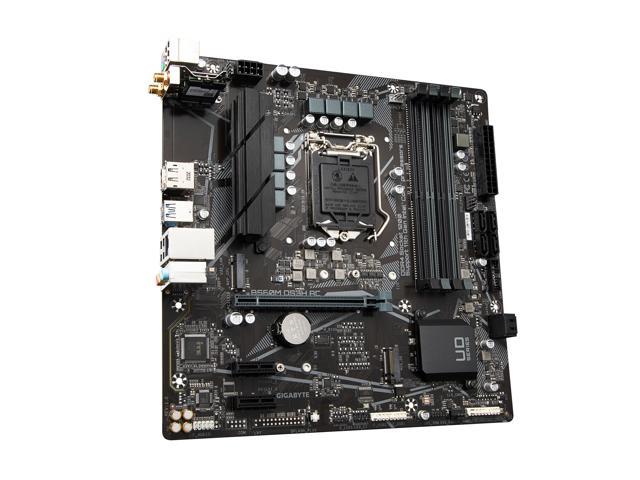 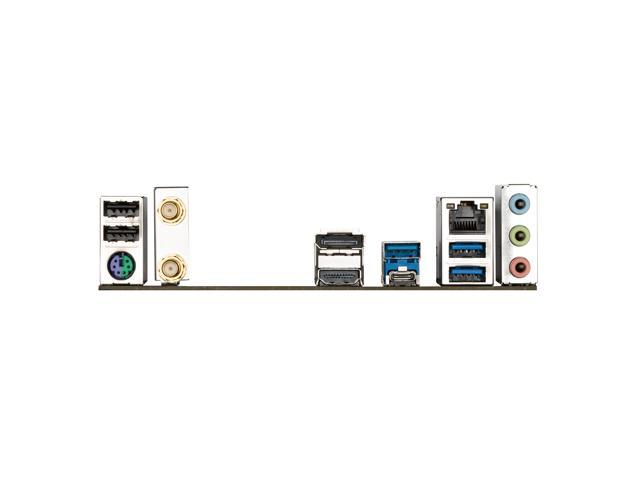 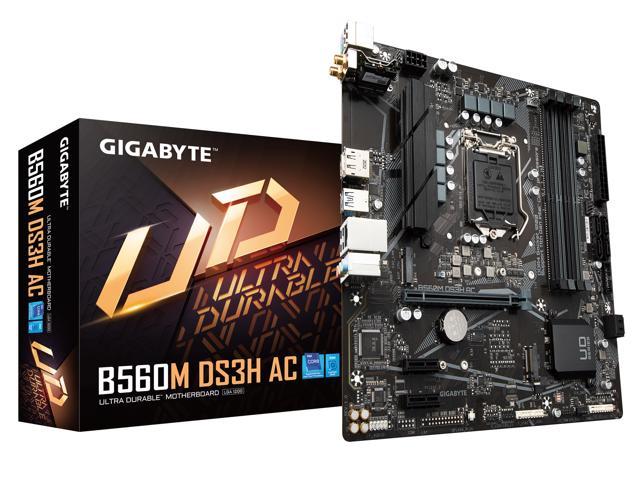 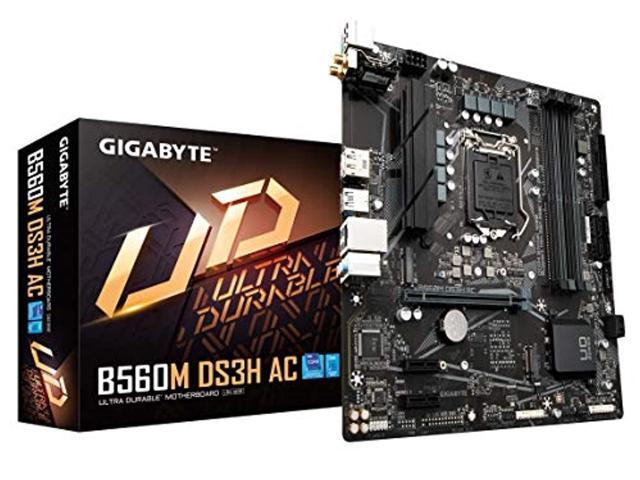 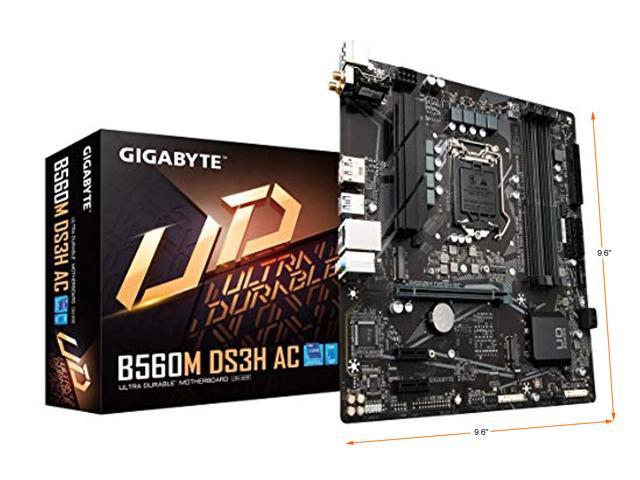 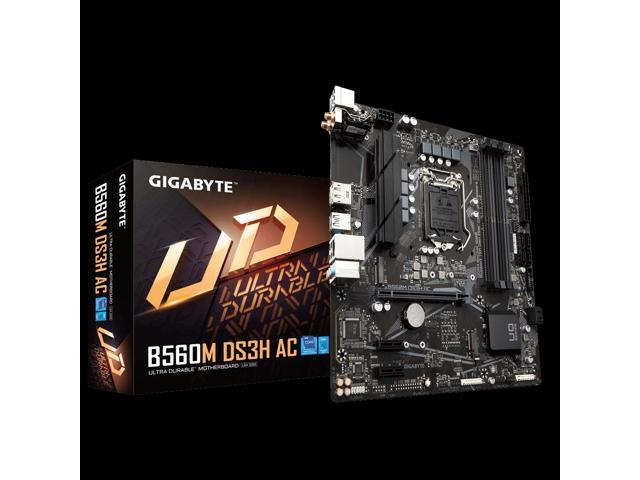 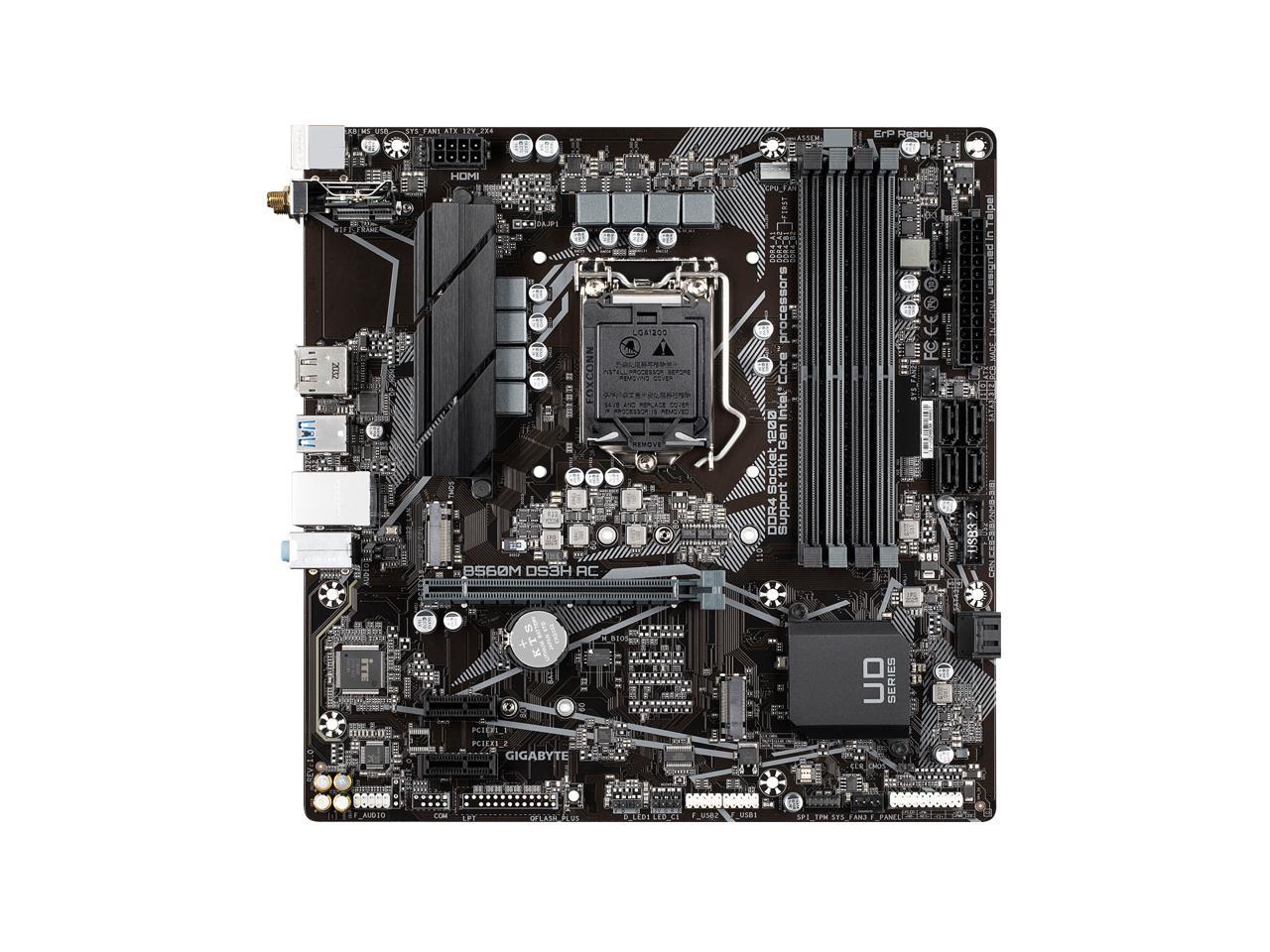 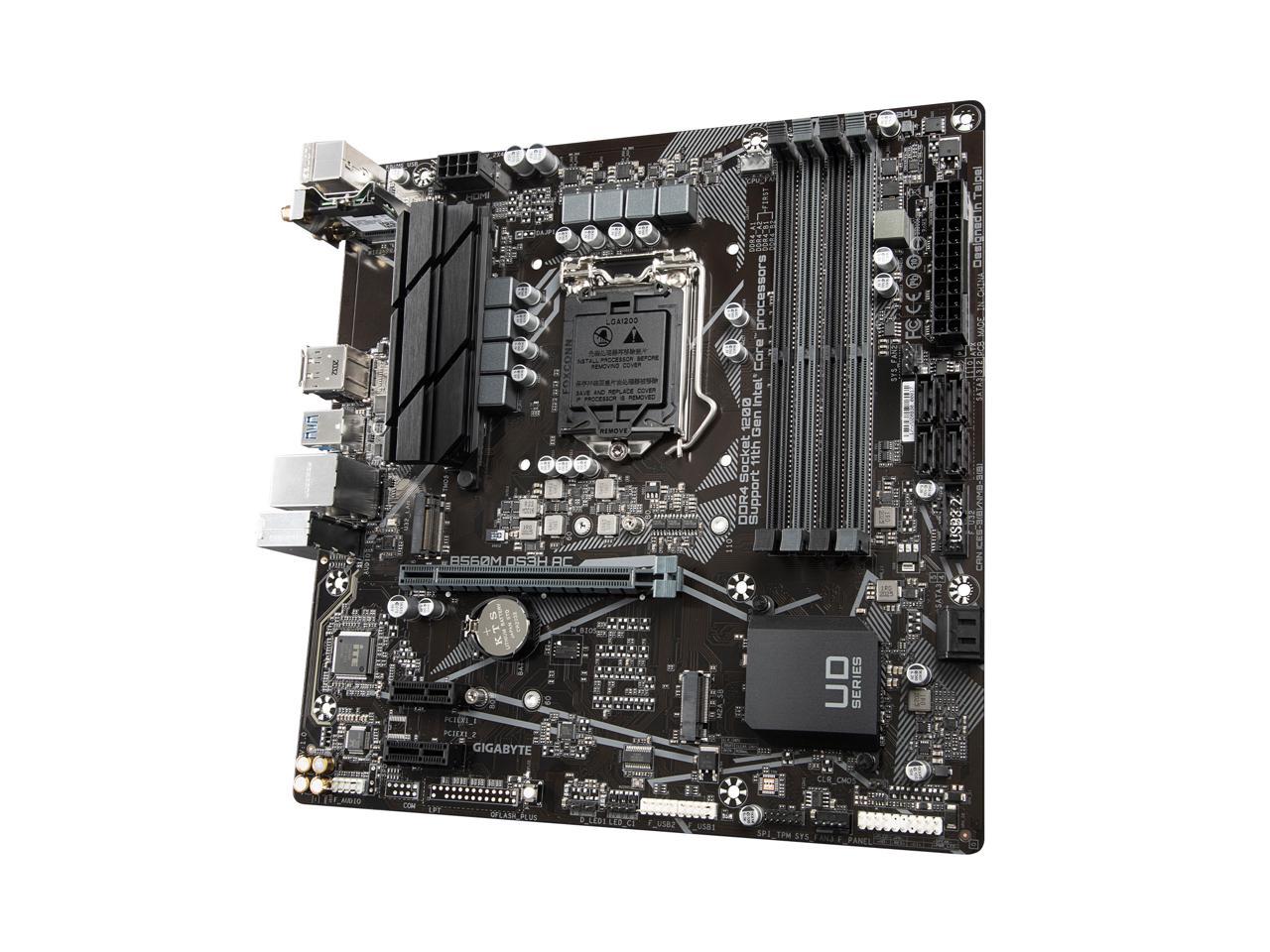 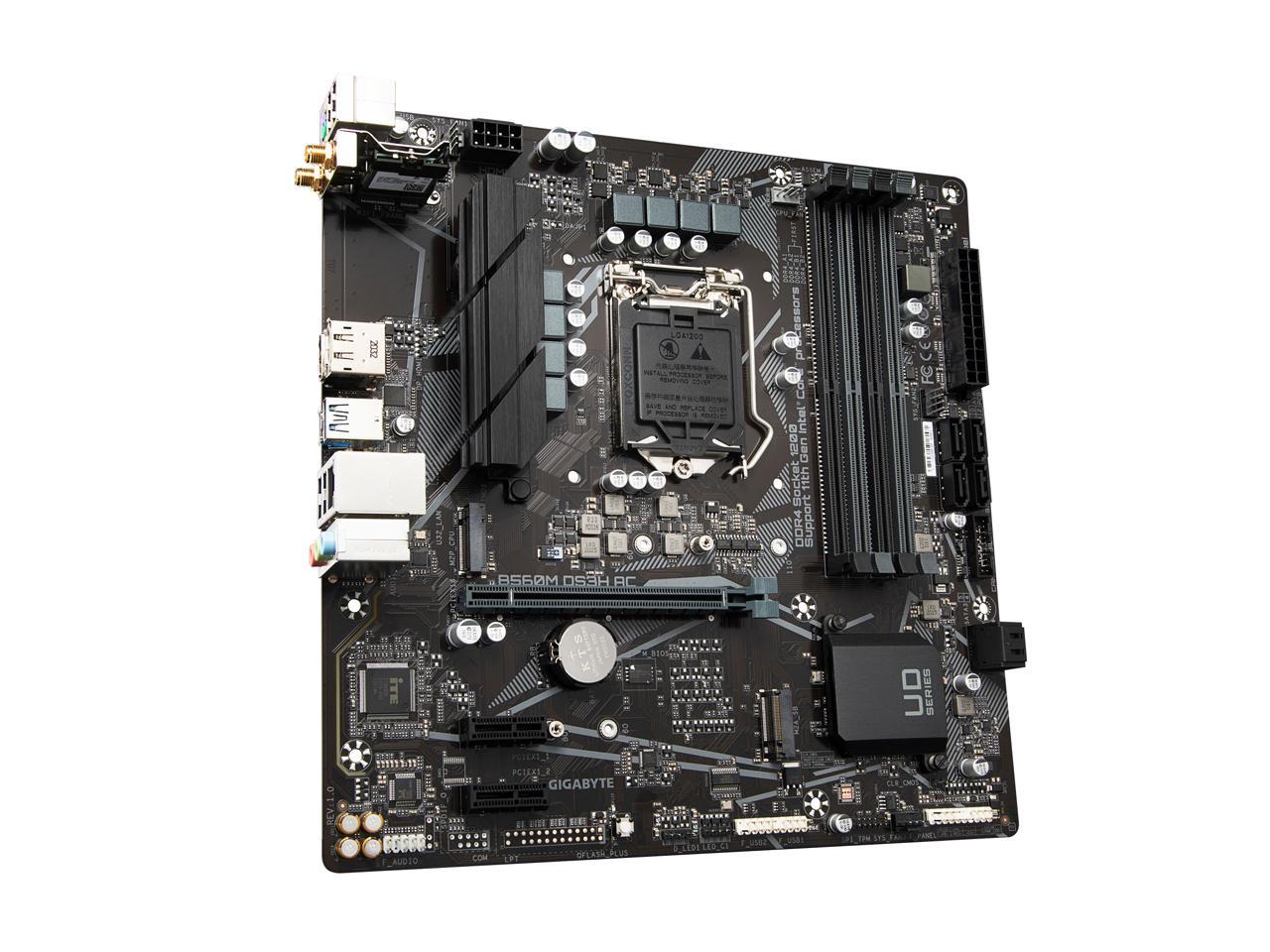 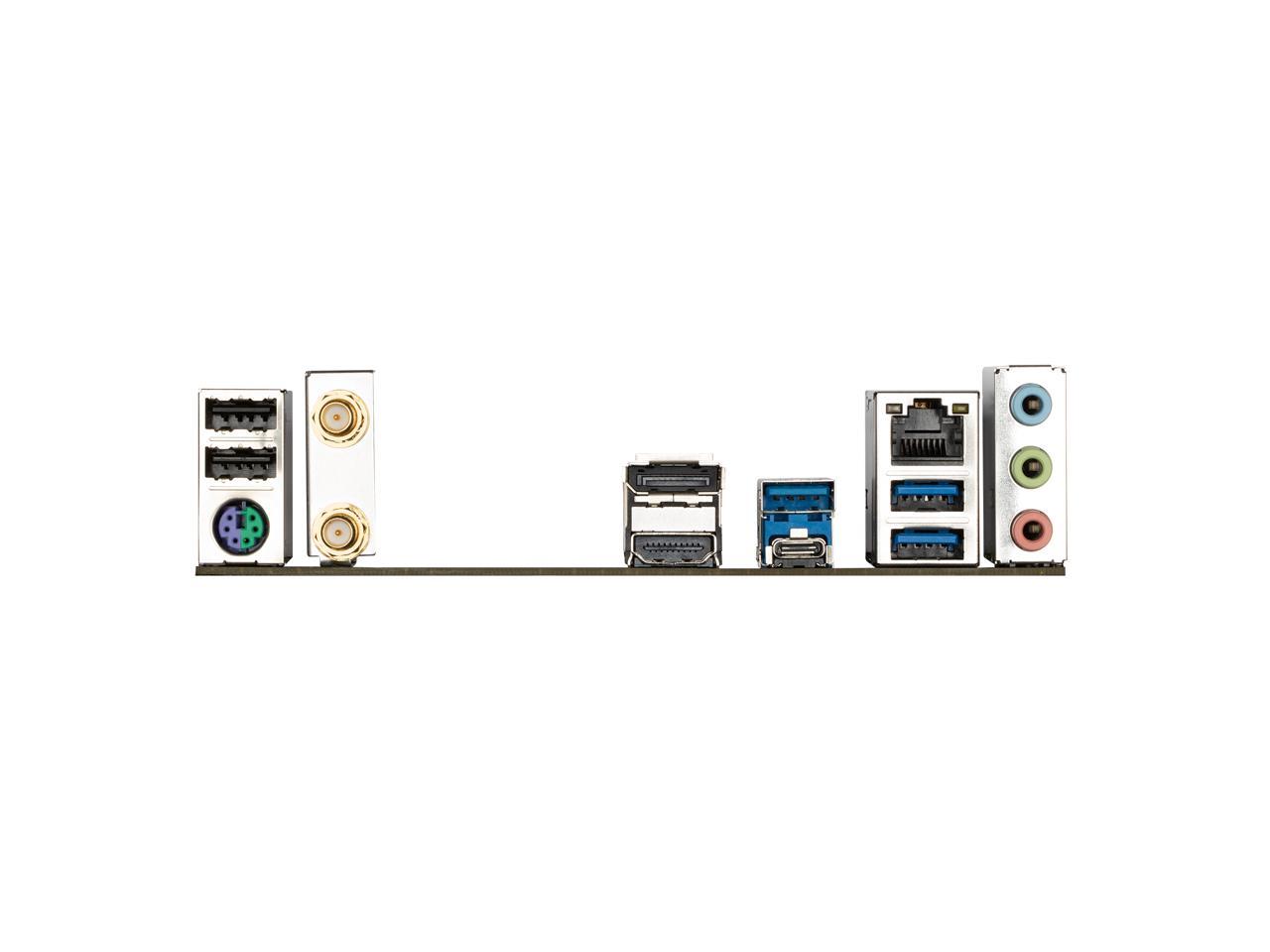 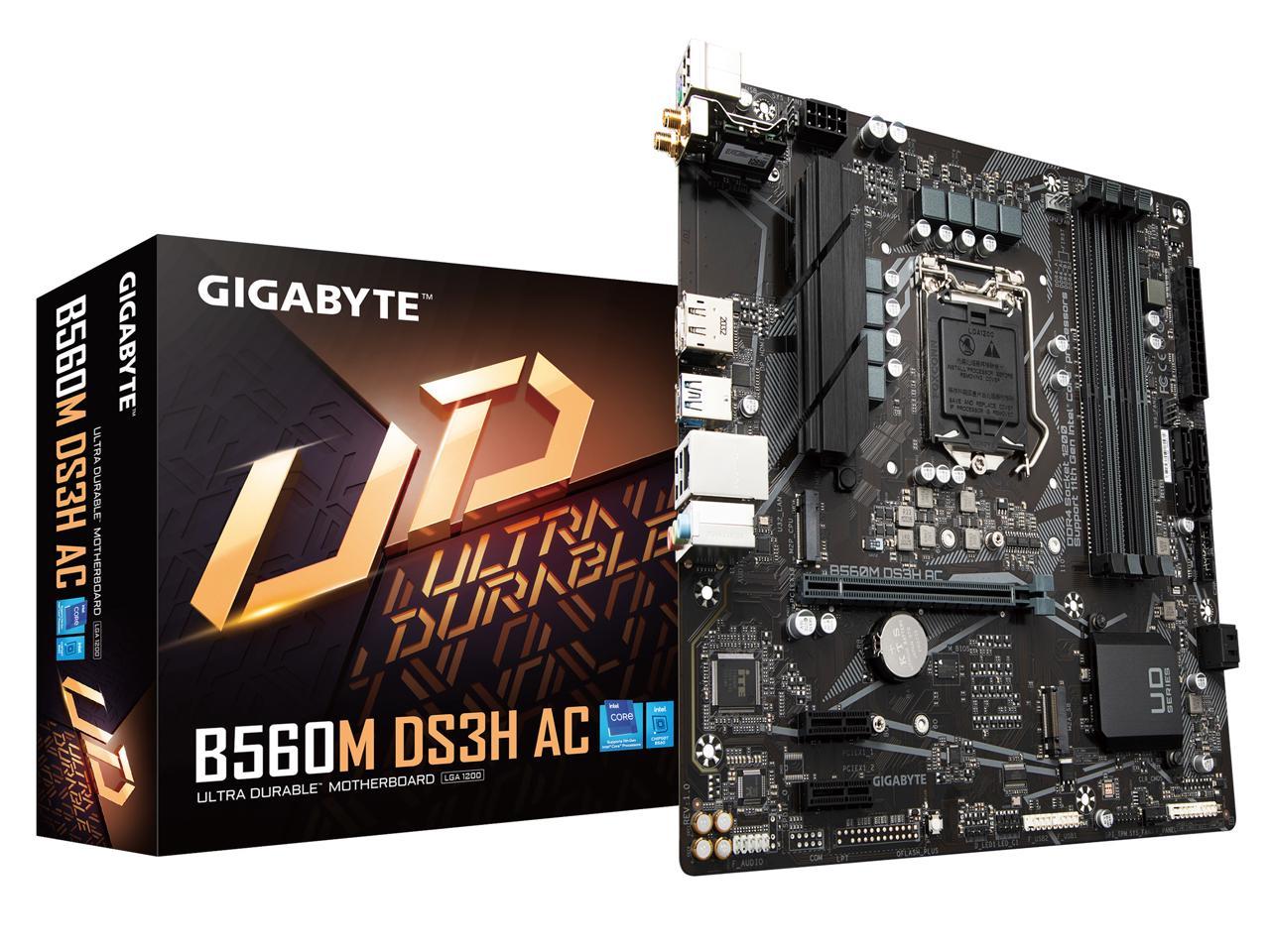 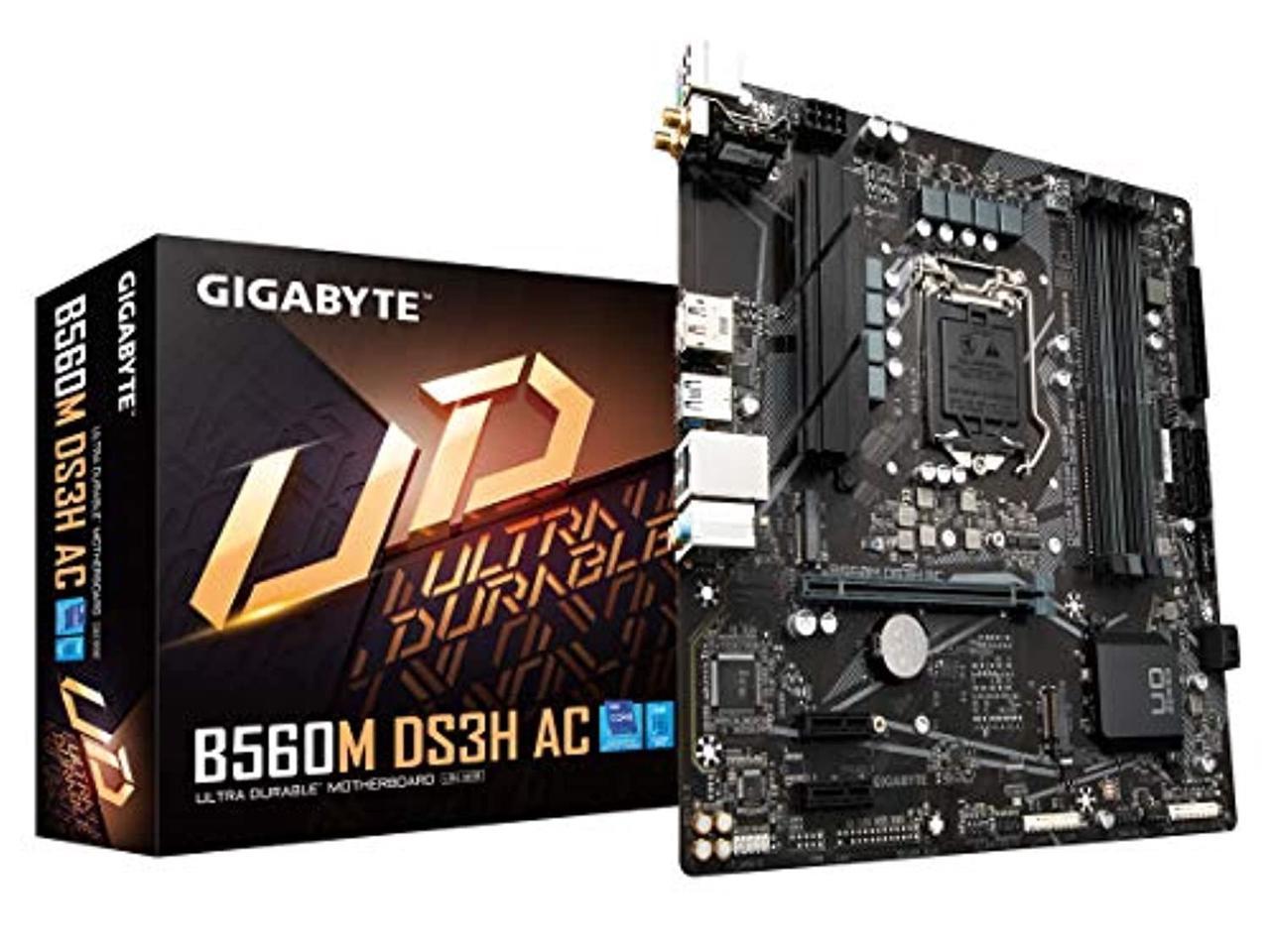 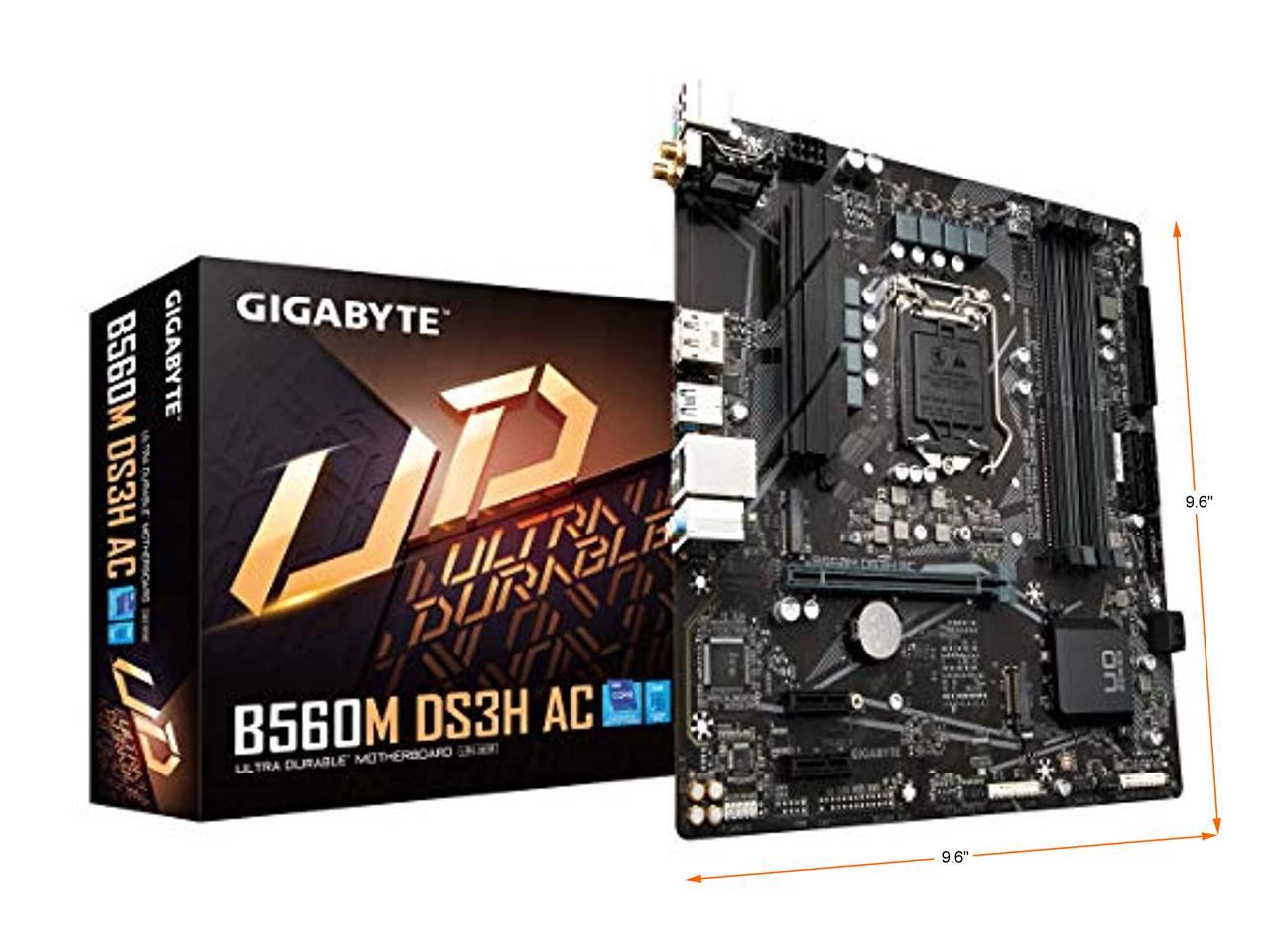 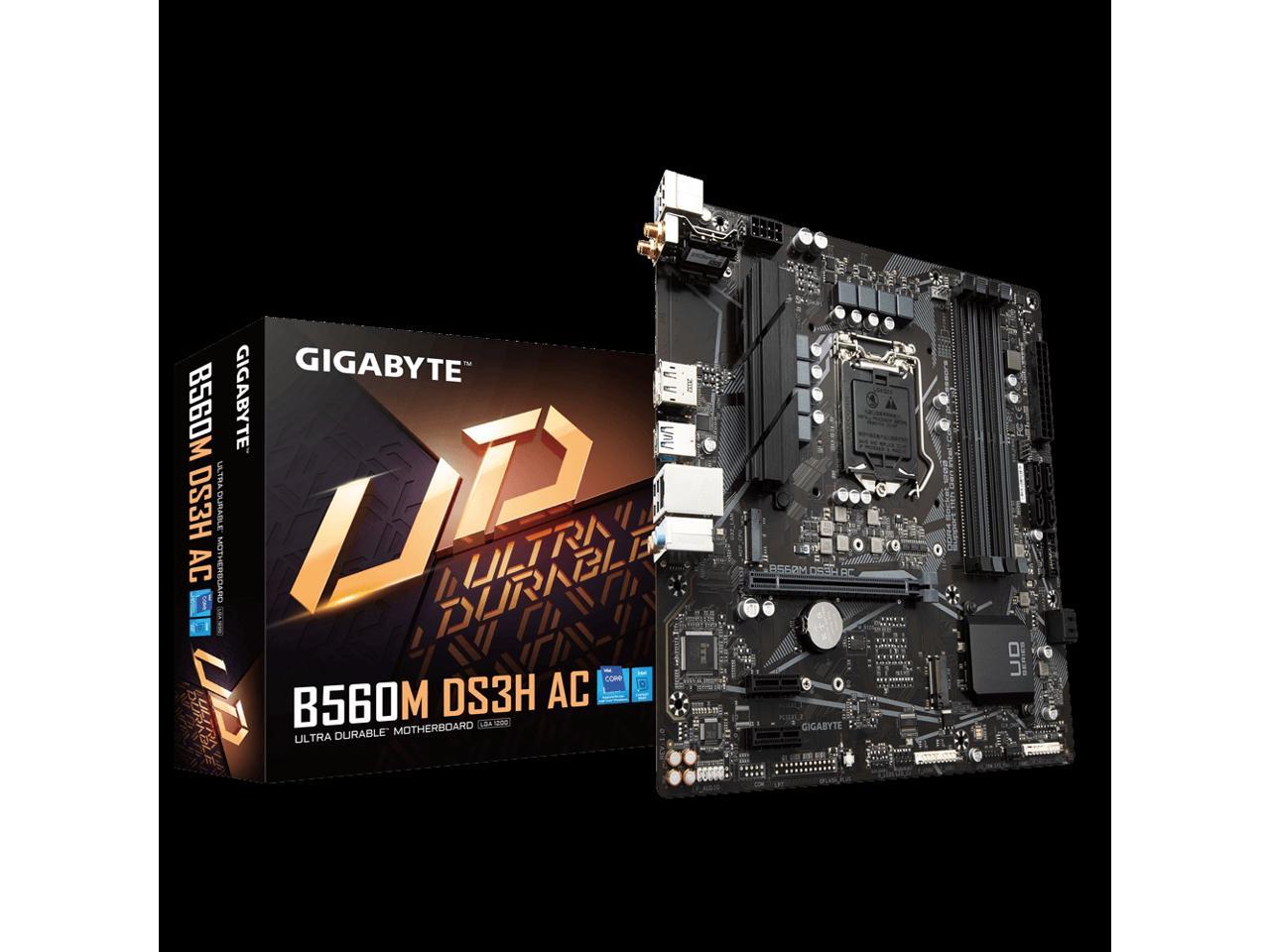 Smart Fan 6 contains several unique cooling features that ensure gaming PC maintain its performance while staying cool and quiet. Multiple fan headers can support PWM/DC fan and pump, and users can easily define each fan curve based on different temperature sensors across the board via intuitive user interface.

Each fan headers support PWM and DC fan and Water cooling Pump , and up to 24W (12V x 2A) with Over-Current Protection

GIGABYTE is offering a tested and proven platform that ensures proper compatibility with profiles up to 4600MHz and beyond. All users need to do to attain this performance boost is to ensure that their memory module is XMP capable and that the XMP function is activated and enabled on their GIGABYTE motherboard.

* XMP Profile support may vary depending on memory module.

With the optimized daisy-chain routing, the B560 Ultra Duable motherboard provides a proven speed of up to DDR4-4600+ MHz with high-density Memory module*. Optimized daisy-chained routing eliminates the stub effect, pushes the one DIMM per channel in dual channel interleaving mode to hit higher memory frequencies, providing professional gamers a denser and faster system memory experience.

*Performance may vary in circumstances. Please refer to the QVL list for detail support information.

The maximum memory capacity on the B560 motherboard is 128GB. After Intel updated the memory reference code, a single slot can support up to 32GB. Therefore with populated 2 DIMM per channel on both channel, total memory capacity is 128GB, which was only available on High End Desktop (HEDT) platforms. For users who always run out of memory capacity, there is more bandwidth now for memory-intensive application such as rendering and video editing.

GIGABYTE Ultra Durable Motherboards are focused on delivering M.2 technology to enthusiasts who want to maximize their Systems’ potential.

Realtek 8118 LAN is a high performance and friendly network chip for gaming players with automatic bandwidth allocation to ensure the highest network priority of the game or application. It can provide users the most comprehensive features and the fastest and smoothest Internet experience.

Program On Top Gets Highest Priority

The USB Type-C is a new reversible connector that is loaded with useful features such as USB 3.2 Gen1 support for 10Gb/s transfer speed. Powered by the Intel USB 3.2 Gen1 controller, this little port provides the best USB Type-C experience possible.

With B560 Motherboard will support either 5v or 12v Addressable LED lighting strips and up to 300 LED lights. RGB Fusion 2.0 with Addressable LEDs comes with new patterns and various speed settings with more to come.

Update the BIOS easily without installing the CPU, memory and graphics card.

With GIGABYTE Q-Flash Plus, you don’t need to install the CPU, memory and graphics card nor enter the BIOS menu to flash the BIOS. Just download and save a new BIOS file (rename to gigabyte.bin) on the USB flash drive, then press the dedicated Q-Flash Plus button and you’re good to go!

Sulfur compounds in the air can penetrate tiny onboard resistors creating chemical change and causing these resistors to open or short. If either of these occurs the motherboard will fail to function. By equipping resistors with an Anti-Sulfur Design GIGABYTE gives Ultra Durable Motherboards a whole new meaning.

The BIOS is essential for users during initial setup to allow for the most optimal settings. With a new GUI and easier to use functionalities, GIGABYTE has been able to reinvent the BIOS to give users a better experience while setting up their new system.

* Photos are for reference only. Product features may vary by model.

Overall Review: Yes I would recommend.

Overall Review: No complaints and is working as it should. I got sick of one of those ALL IN ONE computers for my business and decided to build my own using the Gigabyte motherboard as the foundation. Was able to build a much faster and efficient computer for a fraction of what my last computer cost me out the door.

Overall Review: I would say if you need a cheap motherboard this is the one to go with

Cons: I try 3 different cpus and I could not make it work. I took it to best buy and they told me the cpu holder was damaged. since the 30 days are over I CAN NOT GET A REPLACEMENT. so I got screw.

Manufacturer Response:
Dear Customer, Thank you for your comments. We apologize for your difficulty with your GIGABYTE product. Please contact GIGABYTE customer service department for further assistance about CPU socket service on motherboard by email at services@gigabyteusa.com or by phone at 1-626-854-9338 opt. 4 Monday through Friday from 08:30 ~ 17:30 PST. GIGABYTE VIP Support Team
Anonymous
Ownership: 1 week to 1 month
Verified Owner
Works good11/20/2021 12:07:43 AM

Overall Review: Havent had a problem yet. I do wish the board had a digital display instead of a weird display. And its kind of annoying how if you dont have a cpu thats later than 11th gen; than a lot of features are unusable.