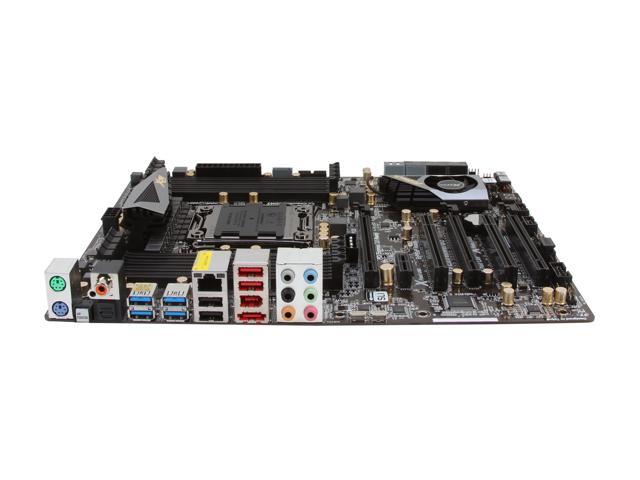 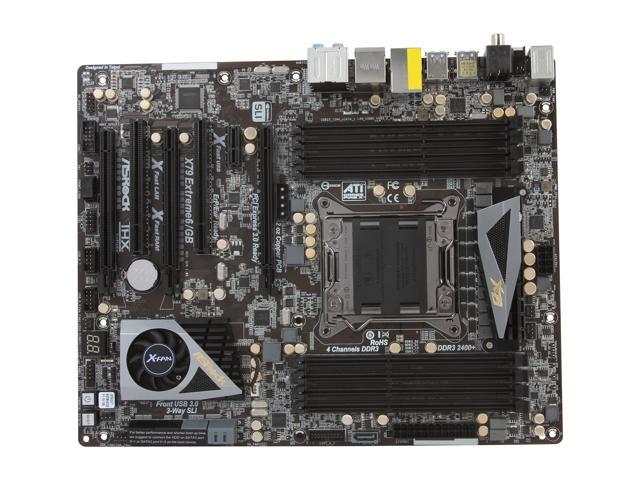 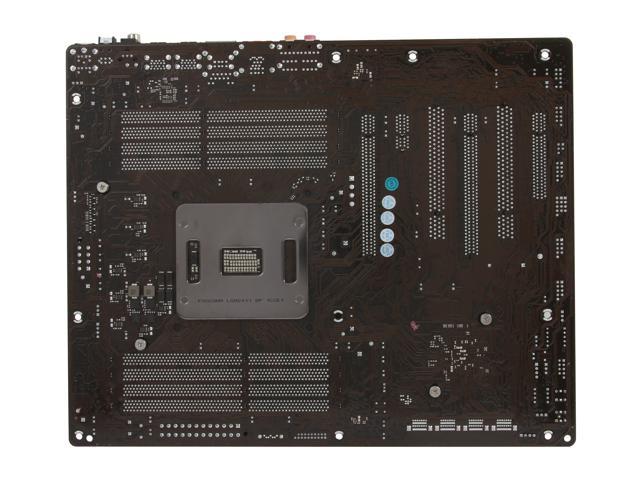 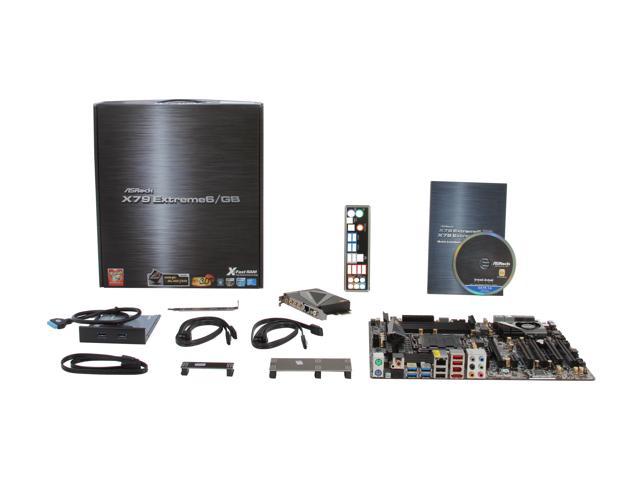 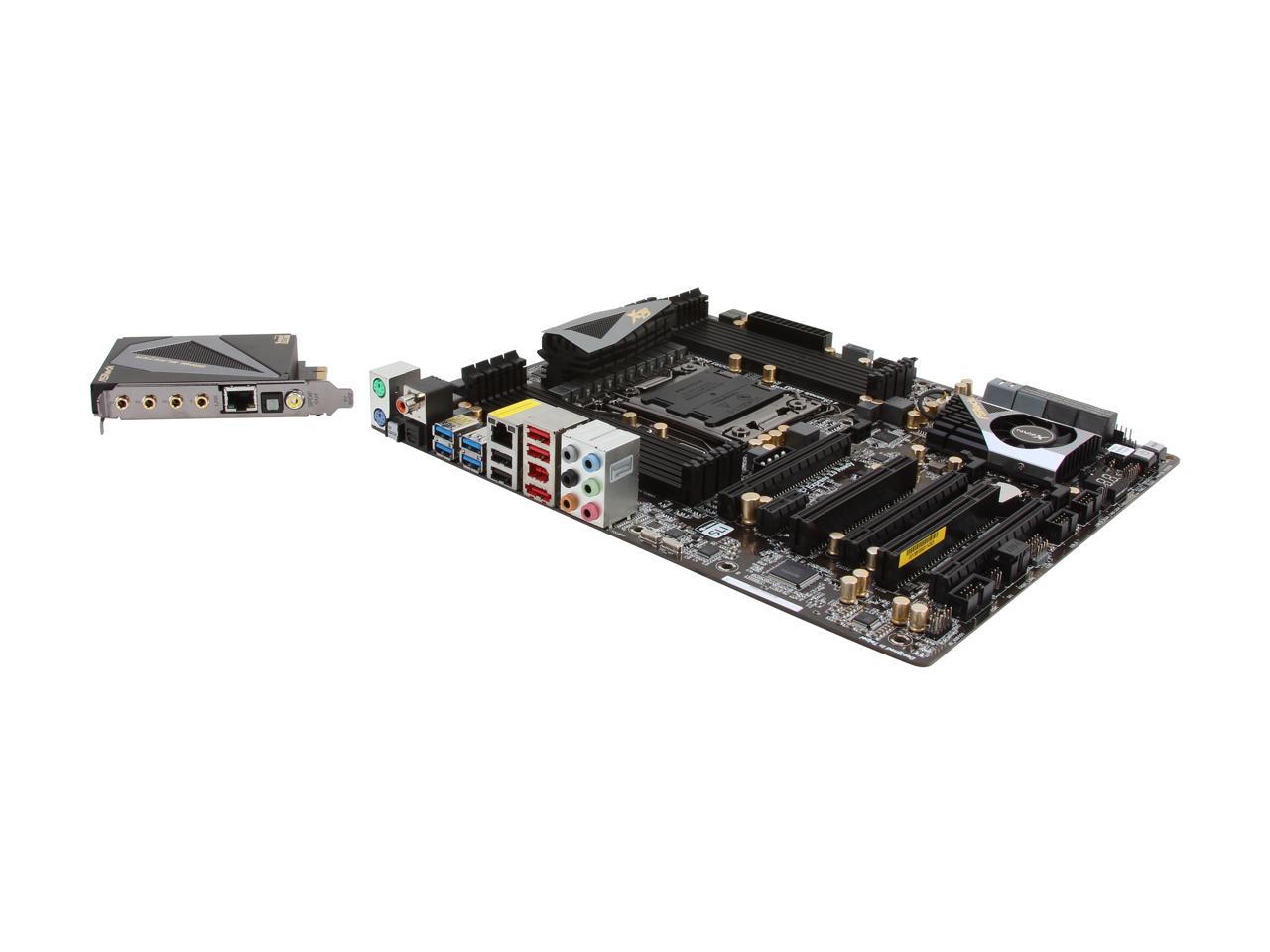 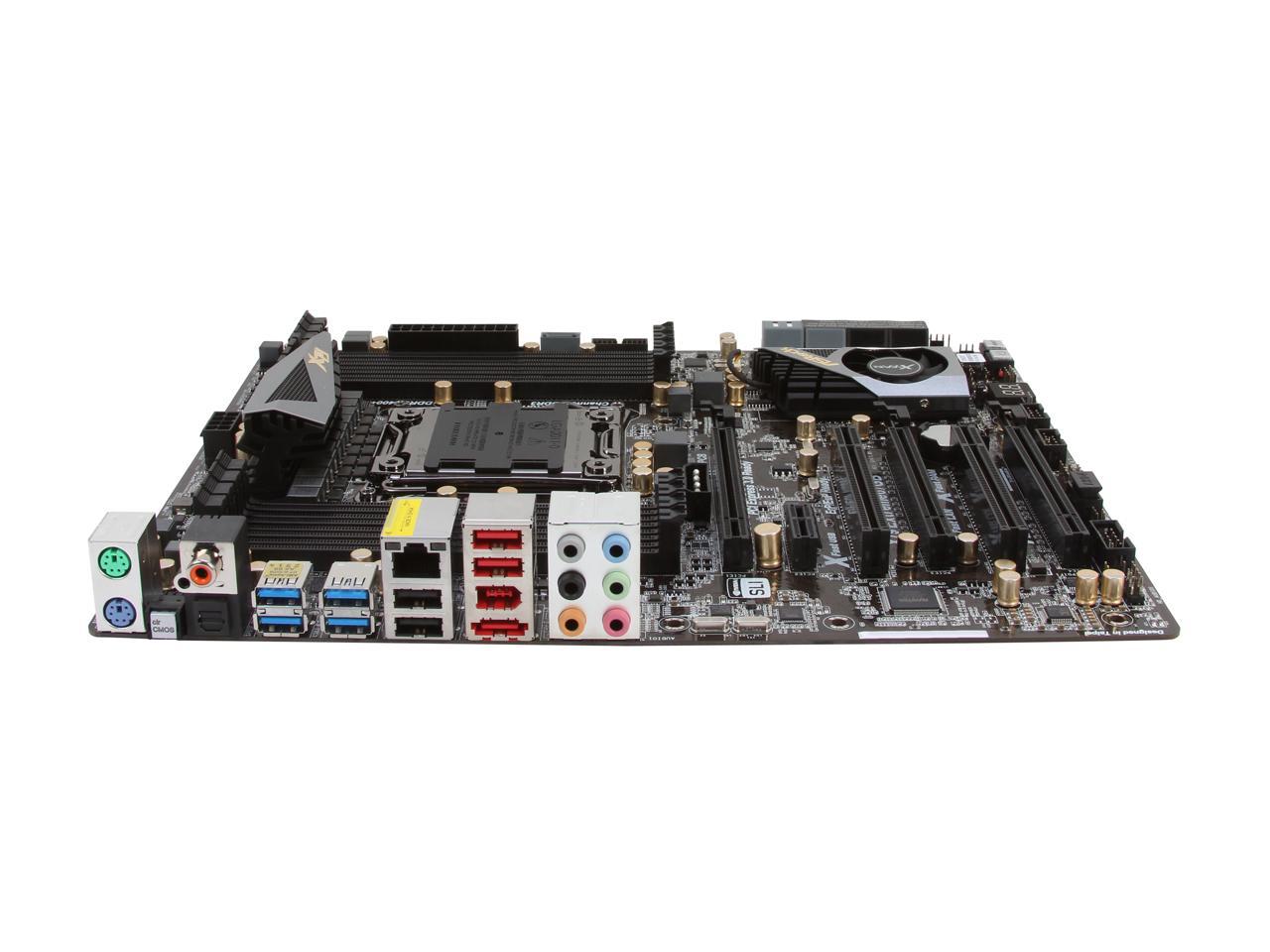 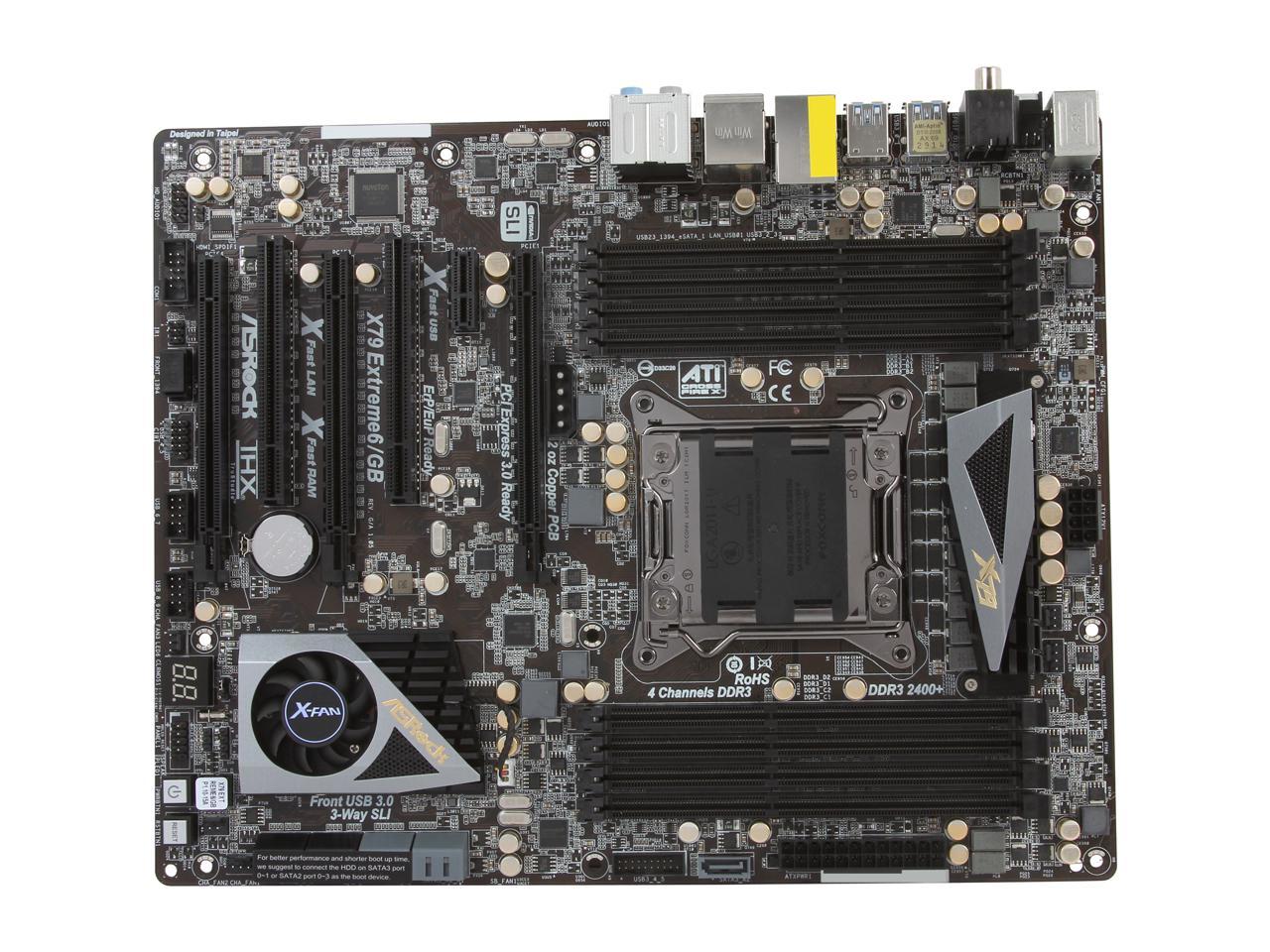 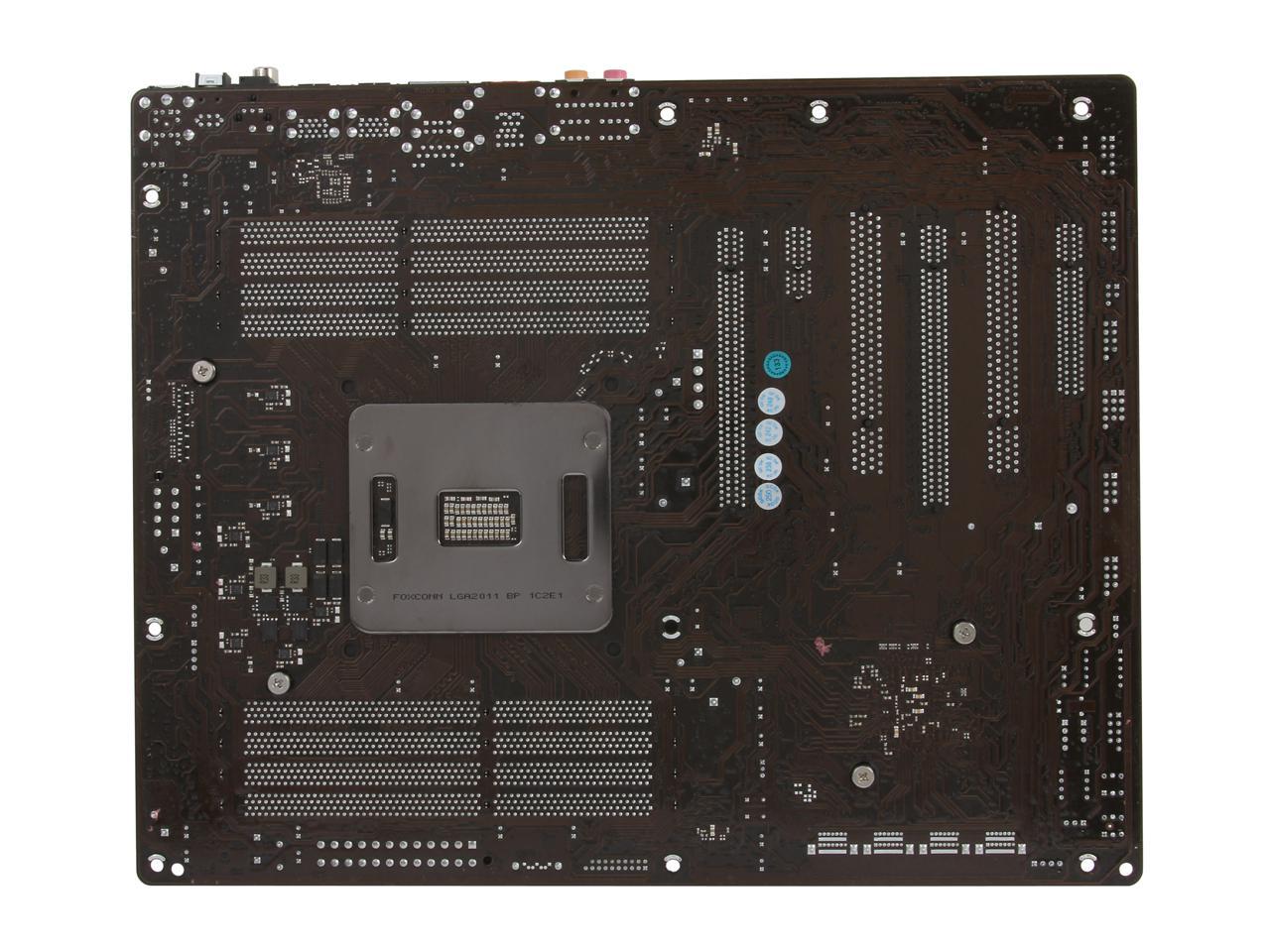 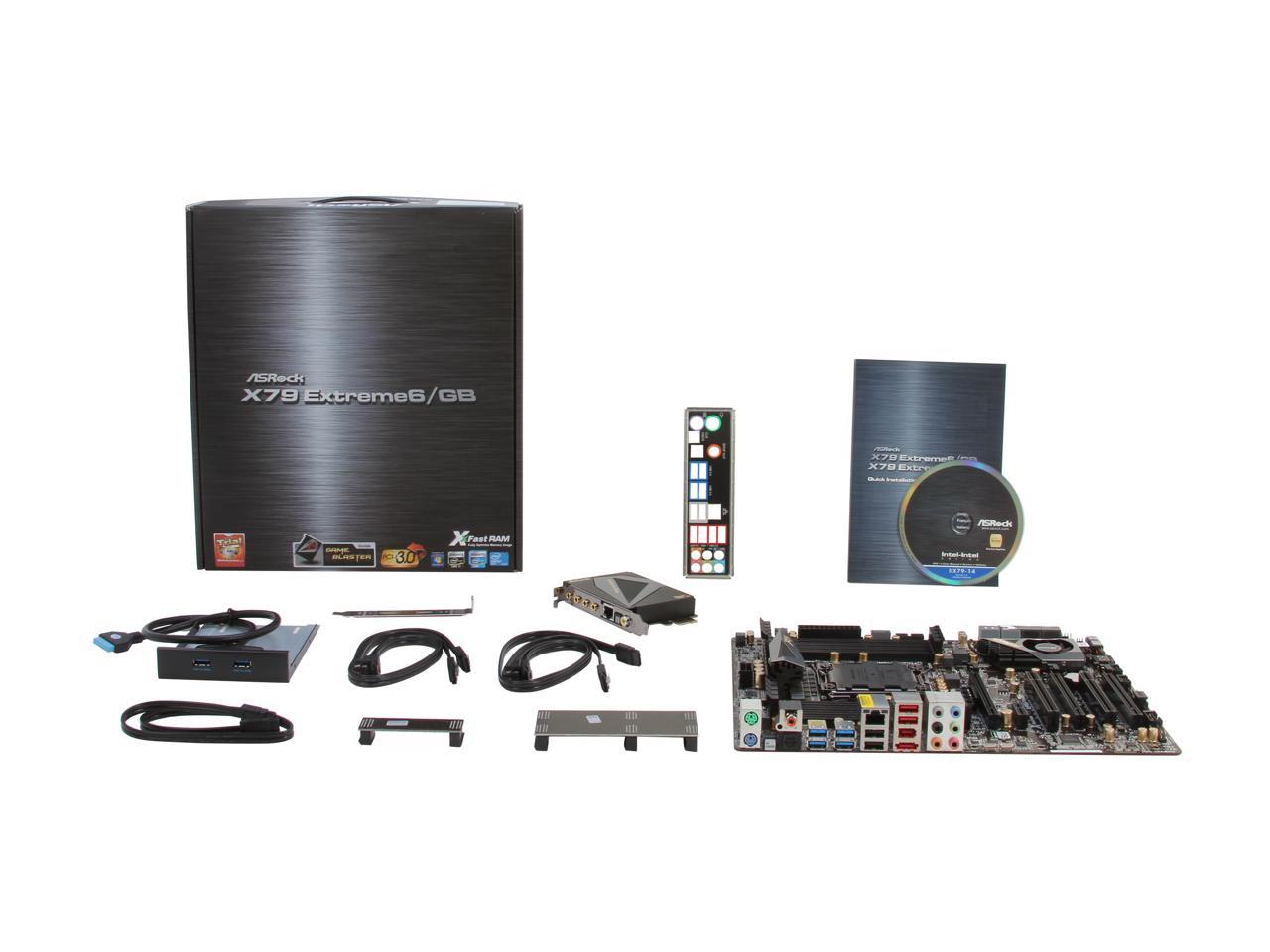 The ASRock X79 Extreme6/GB isn’t just a well-priced feature rich offering like we are used to being, it’s all that with the ability to offer monster performance.

Pros: This board replaced the other sack of garbage I had, which was nicknamed: "Asus Sabertooth X79". This board didnt come with any problems or hassle like its predecessor. Like the USB ports and the fact that this board has a 1394 header on the board. This board has performed exactly how a motherboard is supposed to perform. Just hook up all the parts. Turn on your PC, install your OS. Fast and easy. ASRock CD was easy to install all the drivers for the platform. Bios was a lot cleaner and easier to follow than that other piece of garbage I had.

Cons: Manual was kind of hard to follow, but whatever, not worth an egg. The price was annoying but thats it...lol... Although ya get what ya pay for.

Cons: I didn't read the instructions (like the other reviewer here) so it took me an extra day to get the sound card working. Doh! - Put it in the 4th slot already like they said (they even included a picture)... and it too 'just works'.

Overall Review: If their other boards are this good then they may just have got themselves an ASUS convert in me.

Pros: Follow Up Review. Sound Blaster Card does work. Completely my mistake. Instructions even state to put it on the bottom PCI-E slot just like the rep replied to me in my first post. I am not noob but after 18 years of building systems I don't always read the instructions. Sound Card is AWESOME through my home stereo!

Pros: This motherboard is a stable board. With the 3930k and the H100 with modified fans I was easily able to get to 4.2Ghz without batting an eye. The voltages were perfect to keep it stable and keep my temps below 70C at full load with Prime95. Really like this board's features with the added creative card. It's an easy CPU overclocker that keeps your computer stable.

Cons: Make sure you get either 1866 or 2133 memory for this, if you think it will sit at 1866 and OC the main clock to get 2000, you will hit 105 and the machine will stop booting. I verified it was the board and not the voltage of the ram nor the timings I had it set at. In addition, when I got the board, the MOSFET heat sink above the CPU was damaged. It looked like when they installed it someone stabbed the heatsink and the x79 logo at the top. I know this wasn't from shipping because the box is in great condition and there were no marks to the bag nor dents on the box. It was a quality control piece from the AsRock plant to newegg. I would like it if they shipped me a new part so I can install it myself and not need to RMA the board, please contact me and I will send you pictures.

Overall Review: Great board, and extremely stable. It will do the trick if you're looking to push your 2011 CPU to its limits. Make sure you have a stable Power supply and proper cooling and you will go far with this board. The small cosmetic blemishes are not enough to tell you to not get this board. I switched from ASUS to Asrock and this board's quality is exactly what I was looking for.

Pros: Works. I like the UEFI. Overclocks like butter. Quick support from ASRock. Works fine, fail safe, drains to the bilge. During installation during the first power up, it won't do anything. I called Silverstone to confirm power supply was good. Then I called ASRock and they helped me identify a bad USB 2.0 connector in my old Thermaltake Armor case. After that it was smooth sailing. One cool thing was that the Front Panel USB 3.0 Header that ships with the board also serves as a mount for 2.5" Drives, so my SSD is there now.

Cons: None that have surfaced yet.

Overall Review: I got the board as part of a combo purchase with the ever elusive 3930K and I was pretty nervous having read all the negatives about ASRock boards. I was replacing an EVGA X58 that was blown up in a lighting strike. However, every X79 board sold here is getting thrashed, so I figured, why not. Great features and a good price. I am very pleasantly surprised at how easy this was to set up. This machine is going to get hammered doing HD Video trans-coding, so stability is a serious concern. After playing with several combinations I am running: 4500MHz vcore 1.289 CPU temp solid at 65C While I am writing this review Prime 95 is banging away for the 18th hour. Yup, I'm stress testing and surfing at the same time. CPU: 3930K MB: ASRock X79 Extreme6/GB Mem: Ripjaws Z Series 32GB 1600 SSD: Crucial M4 128 Power: SilverStone 1000W ST1000-P Video 1: EVGA GeForce GTX 570 HD Superclocked 1280 Video 2: PNY Quadro FX 1800 Cooling: Corsair Hydro Series H100

Pros: Many great features, very fast perfect for my new build. Gameblaster card is GREAT (except I can't figure out teaming function, my fault tho)

Cons: All blackish. Gameblaster should have maybe been built into mobo, takes up 1 expansion slot.

Pros: It's a good board for the socket 2011 processors. Comes with a nice Soundcard. Looks nice. Manual is easy to understand.

Cons: USB 3.0 ports on the mother board are not working at the moment, but the USB 3.0 on my Cosmos II are working flawlessly.

Overall Review: I contacted ASRock support tonight, I'll update you when I hear back from them.

Pros: The mobo itself is great. The bios is simple and easy to use, it's very user friendly and overall is great buy. I've always been a fan of the company and I always will be. Overclocking is a breeze, and though I'm not a fan of everything that comes with the drivers, the actual programs are rather nice and interesting.

Cons: The audio card that comes attached to it. This card has given me so many problems trying to set it up that it made me want to make this review. The Creative tech are an absolute joke and have failed to respond to any questions I've had to getting this card working.

Overall Review: Would be five stars had they not included this paperweight.