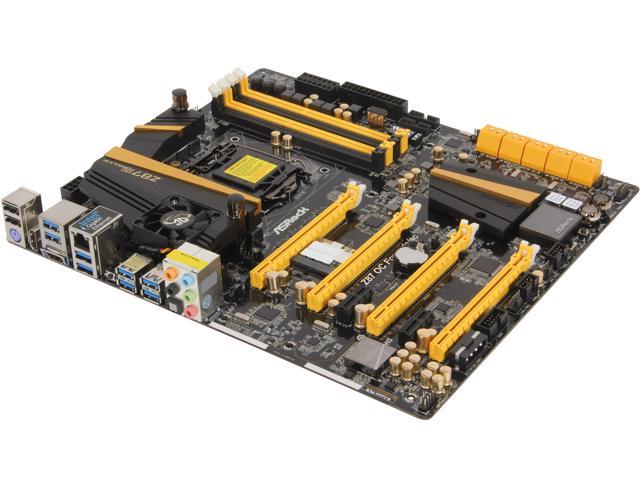 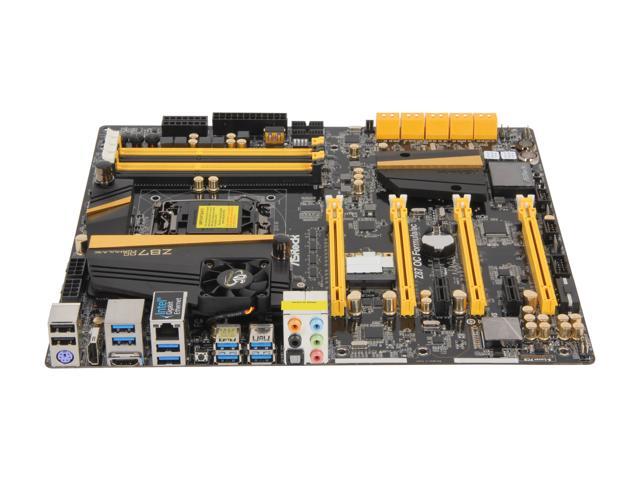 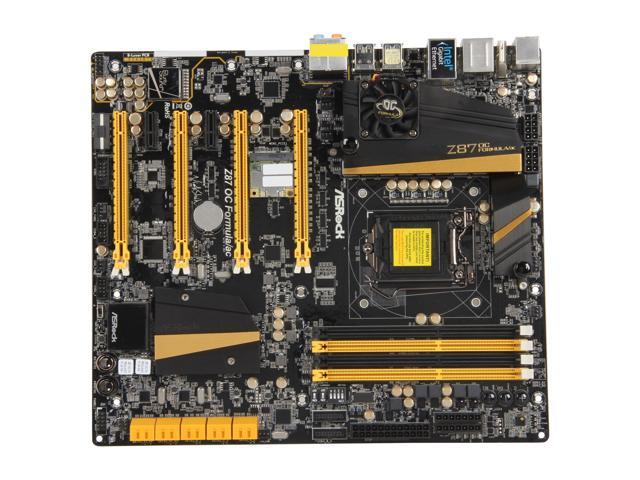 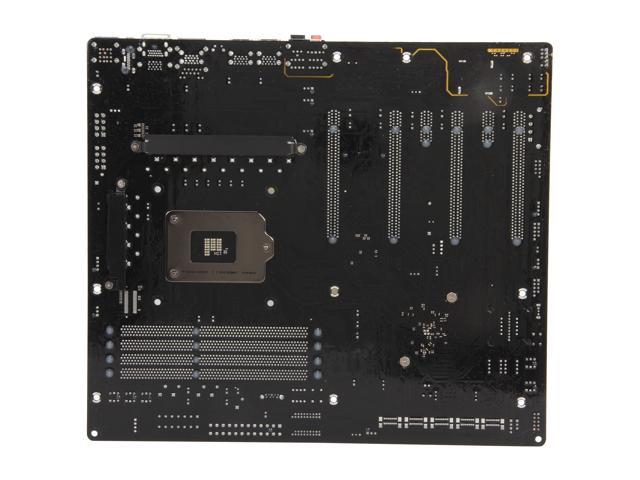 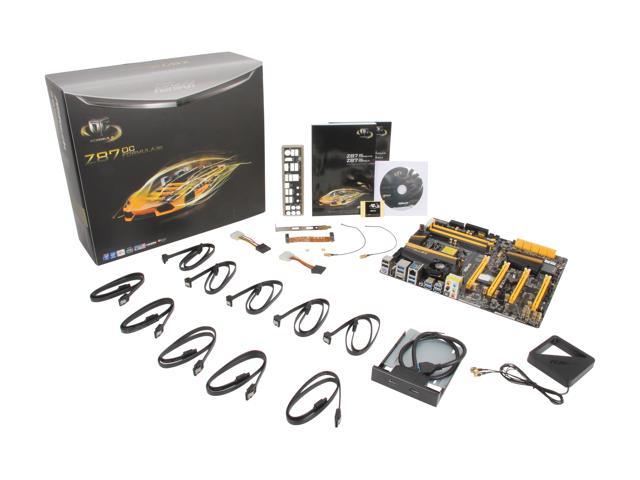 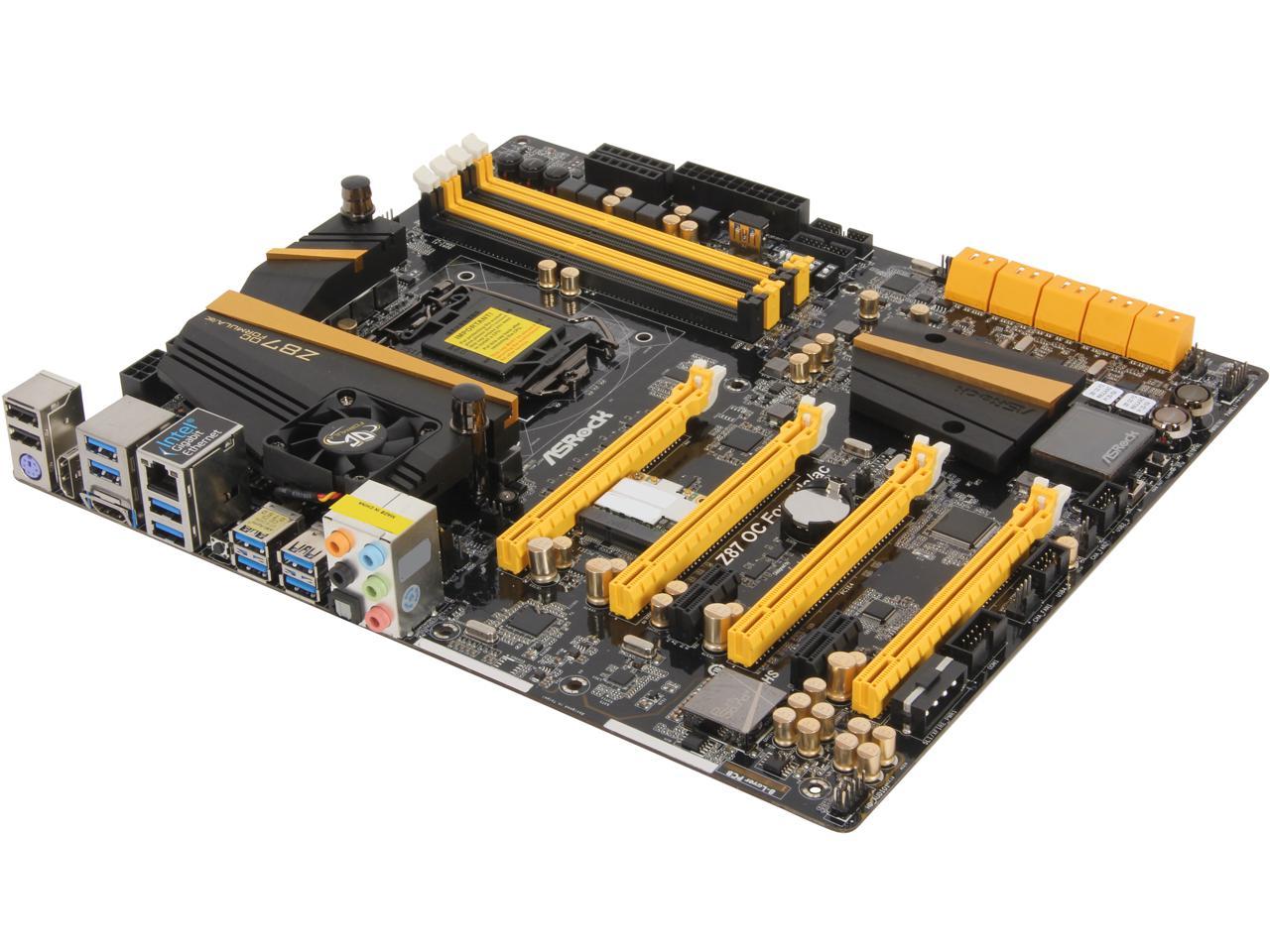 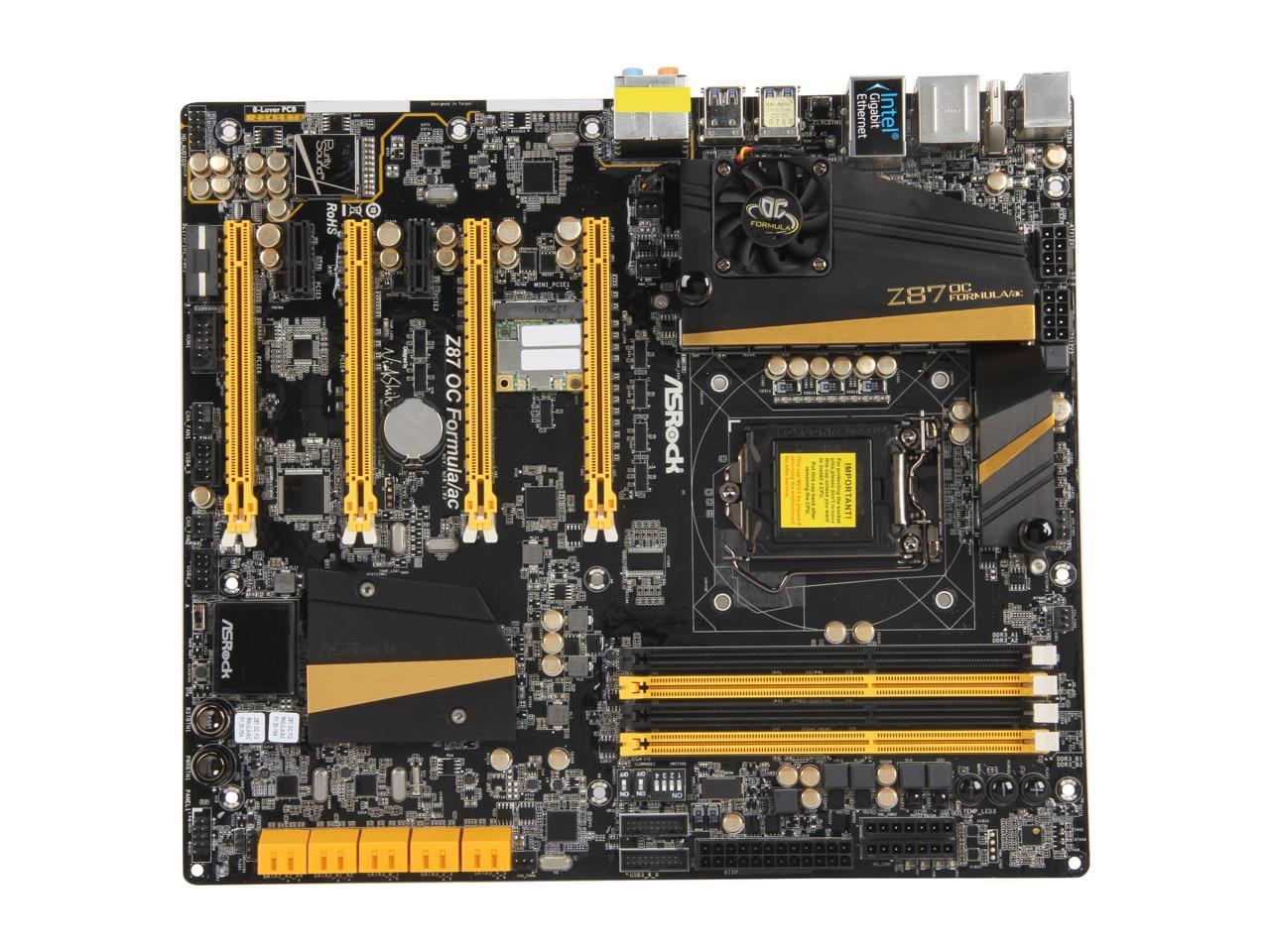 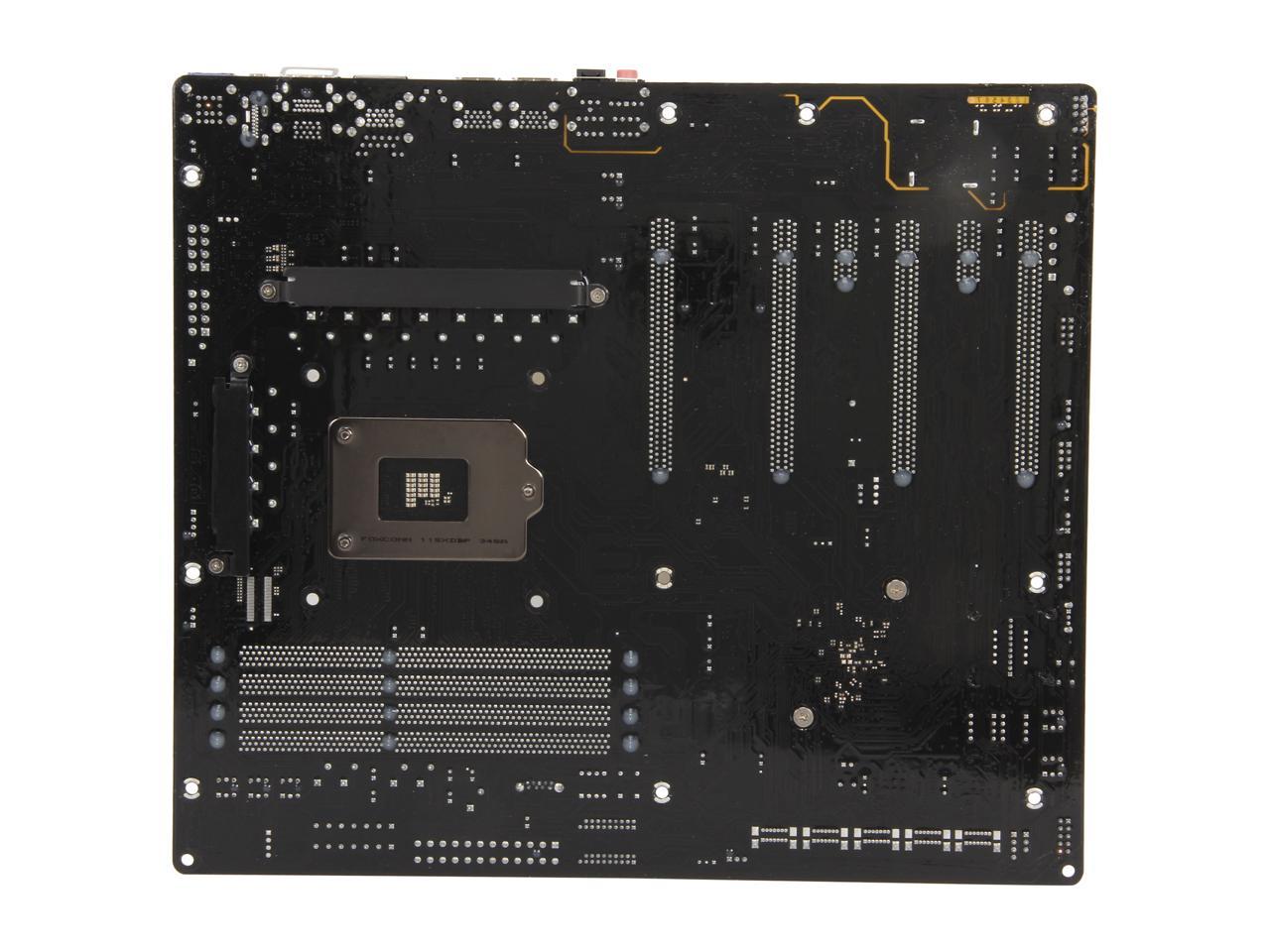 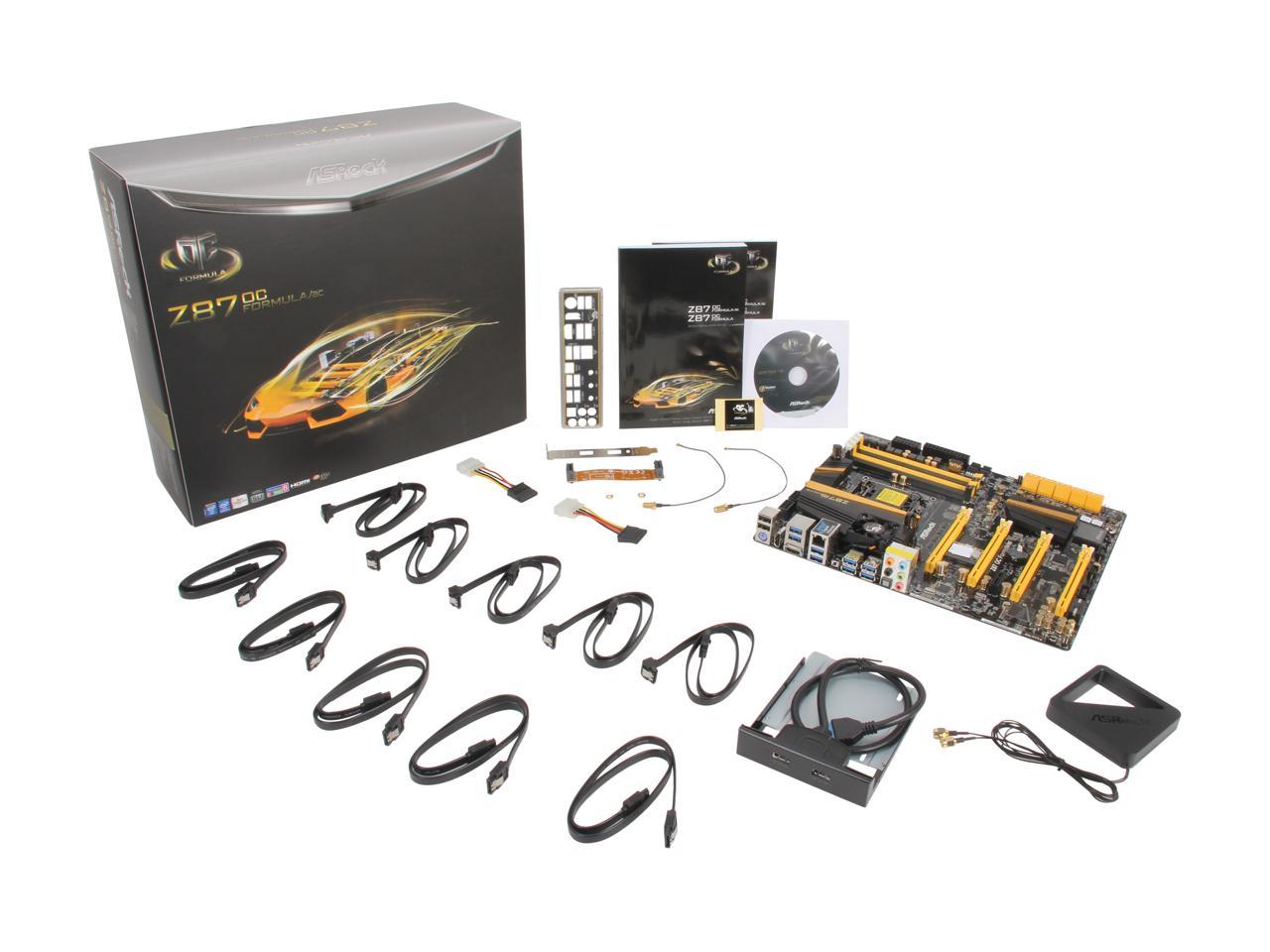 The Intel Z87 Chipset supports Intel 4th generation Haswell processors and has many improvements over its predecessor. It offers native support for USB 3.0, SATA 6Gbps and support for Quad-Read speed SPI Devices. The platform would consume lower TDP, Idle and S3 power inside a smaller package (22mm x 23mm FCBGA). Manageability and security is significantly enhanced with next gen Intel vPro and Intel identity-protection technology. Improvements to Intel’s already implemented RST (Rapid Storage Technology and optimization's to the SSD performance have also been carried out.

Status OLED shows various information of the system on a new high resolution OLED screen. Now you can use three buttons to toggle between information of the power on self test, debug codes, the current time, temperatures, frequencies and voltages of various points on the motherboard.

Conductive liquids such as water pretty much destroy all kinds of electronics on contact. That’s why ASRock has implemented a special layer of Conformal Coating on our motherboards, which makes the motherboards invulnerable to conductive liquids, corrosion and dust. Users won’t have to worry about spilling liquid nitrogen, liquid helium or even clam chowder over their motherboards while overclocking.

Connect your PC and another device to one monitor and toggle between the primary and secondary screen without replugging the connectors every time.

This motherboard supports remote wake with the onboard Intel LAN, so you can connect with your PC from anywhere in the world. You will be able to power your PC on or off, and monitor and take control of it remotely with another smartphone, tablet or computer.

Purity Sound is a combination of several hardware, software audio solutions and technologies that will satisfy even the pickiest audiophiles.

With a 12 Power Phase Design, this motherboard features sturdy components and completely smooth power delivery to the CPU. Plus, it offers unmatched overclocking capabilities and enhanced performance with the lowest temperature for advanced gamers as well.

By stacking two dies into one MOSFET, DSM provides larger die area and lower Rds (on), so the power supply for the CPU Vcore is more efficient.

With the combined power of three kinds of capacitors, MFC allows users to overclock their PC rig to extreme levels without worrying about the hardware components.

With Hi-Density Power Connectors for the motherboard’s CPU power connector, you'll see a reduction of 23% power loss and decrease the connector's temperature up to 71°F (22°C).

Compared to other boards that come with only 3 - 4µ gold, this motherboard provides 15µ gold within the CPU socket, DRAM slots, and PCIE x16 slots, thus delivering three times better performance than usual.

Cons: None, but a lot of unverified users posting reviews here who I doubt even own this board.

Overall Review: First off, you have one user here stating you need to route the wireless antennas outside of the case. That's not true. The antennas bolt to the I/O shield.......then you run the extender outside of the case, or you can replace with a pair of antennas that bolt directly onto the I/O shield if you want. Second, one user here wrote a review complaining about no wifi/BT........well that's because you have to get the "AC" model. The regular formula board has no wifi AC/BT nor claims to. Glad that gentleman is a stickler for details when he orders up products....... 3rd gentleman is giving himself a 5 star rating on technical knowledge, yet he can't boot up his OS? Really? This board's BIOS is about as straightforward and easy to diagnose as they come. Obviously he didn't read the manual either, which gives a few more details than he let on. ;) Some people should NOT be allowed to post a review IMO. This is a fantastic board, be sure to update BIOS to latest 1.6 revision and you will have a rock solid OCing/gaming board that is the best of the best.

Pros: This board is great, does it all. You can customize the settings for pretty much everything in the BIOS and/or the ASRock software, which also provides great temperature monitoring abilities. PCI-E slots were also spaced far enough apart that I had no issues installing 2 very large (double width with 3 fans each) video cards. The built in wireless is great, and the ability to adjust RAM speed is very useful if you want to get some very high-spec memory.

Pros: This board is a system-builder's dream. Hardware, software and system features out the wazzuu!

Overall Review: Maxidream, from what I have read-up on this board prior to purchasing is that the BIOS Ultra Fast setting will only work with a certain carefully chosen setup. First you will need to utilize the Intel Rapid Response Technology setting for the hard drives. This may include and need a RAID 0 setup, of that I'm not sure. I plan for RAID 0 myself and it's what is shown in the AsRock videos. Secondly. you need Windows 8, which I see that you said you had/were installing. The third thing I believe that you have to have to utilize the Ultra Fast setting is UEFI GOP VBIOS with a capable GPU. You may likely need to get with EVGA for your GPU and request a VBIOS with GOP driver capability. All of this is needed to utilize and take advantage of the Ultra Fast setting in the BIOS. Otherwise you may likely experience the issue you had with this motherboard.

Pros: Feature-rich with amazing built-in sound, built-in wifi and enough ports for any application. It has a great user-friendly bios that makes tweaking it possible for non-techies. This board just feels like it is well crafted, it's a beautiful piece of hardware made with superior materials to most mobos I have seen. I was between this and a nice Asus for a high end gaming / music production rig, really happy with it!

Overall Review: I was hesitant to buy from a newer company with mixed customer service reviews, but mine works fine and when I had a question, they responded quickly.

Pros: solid board. easy to put in case. good price.

Cons: This product is easily confused with the Non ac model so make sure the first thing you do upon getting your motherboard is check for the WiFi module. This was my mistake and now I have RMA. other then that i have no compliants seeing i haven't even turned on the board.

Pros: Has everything you need. Nice UFEI and has a waterblock on the NB!

Pros: The UEFI bios is easy to use and runs super fast when enabled with windows 8. The Board can easily manage overclocking on its own but gives you anything you need to do it yourself. The fact that the chip set is already equipped with a water pipe is also nice.

Overall Review: I know this is not a gaming board but i was disappointed it dident do dual sli x16 but x8 is fine i guess.

Pros: A ton of overclocking potential; northbridge has waterblock for custom cooling loop

Cons: UEFI/BIOS will not allow me to boot ANY drives (SDD, HDD, optical, etc) and thus I cannot install an OS! Documentation is poor with no OLED display codes explained; Have not heard back from Asrock tech support and am incredibly disappointed.

3 out of 5 people found this review helpful. Did you?
Manufacturer Response:
Dear ASRock Customer We sincerely apologize for any inconvenience this may have caused you. Please connect the HD drive to (SATA3_0) and optical drive to (SATA3 _ 5) ports. Check both HDD and optical drives have been detected by mainboard under BIOS, Advanced, Storage configuration. Set the desire drive to boot at UEFI, Boot, Boot option #1 (please also check Hard Drive BBS priorities). Also try press F11 repeatedly to bring boot menu once power on, select desired drive to boot. If you have any technical issues or warranty questions please contact our Tech Support at http://www.ASRock.com/support/tsd.asp. We can assist you shortly. Thank you ASRock SUPPORT Tech Support Email: user@ASRockamerica.com