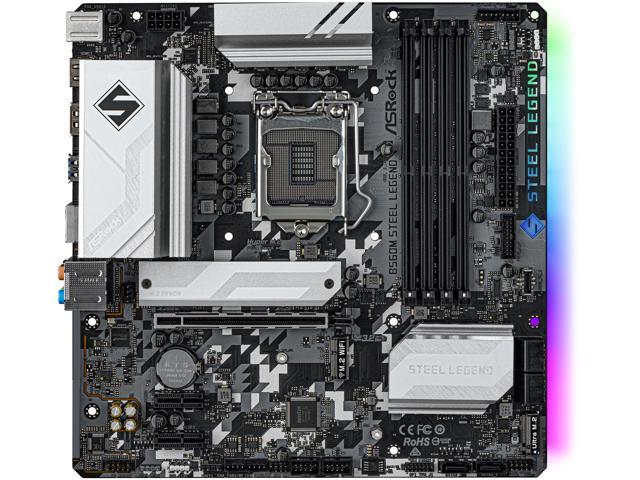 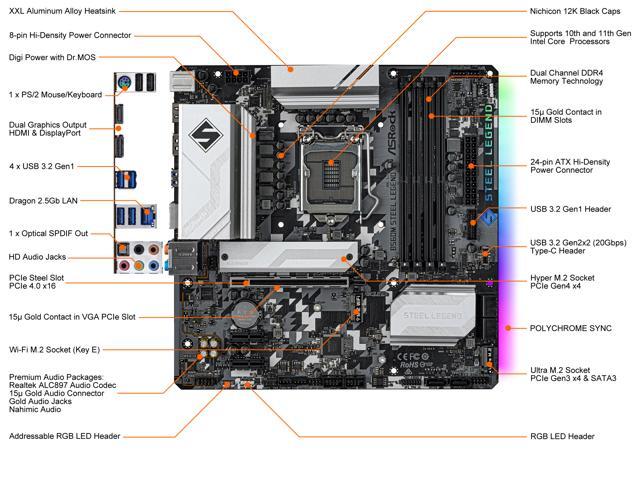 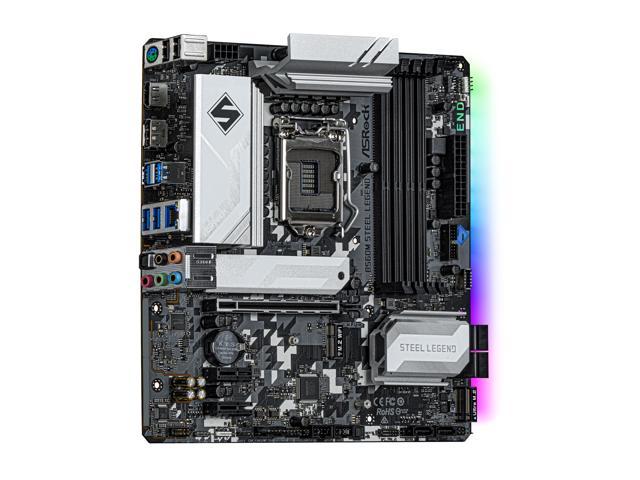 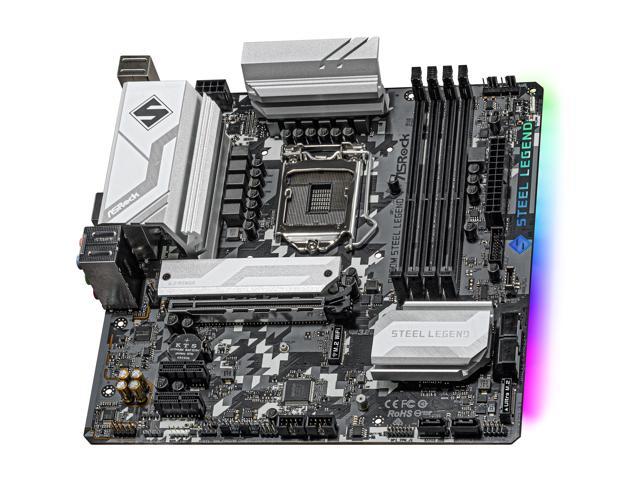 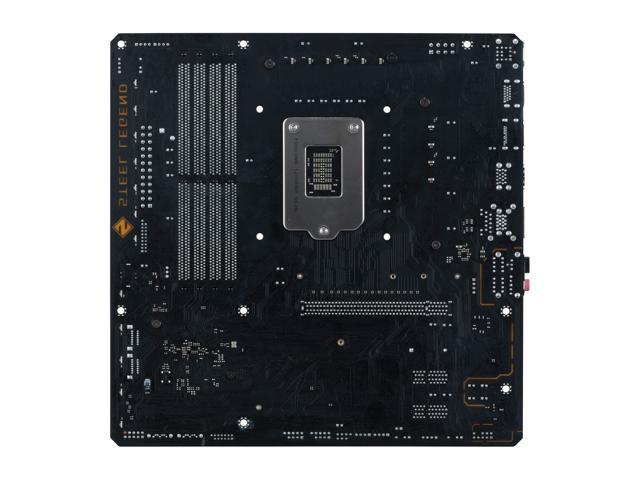 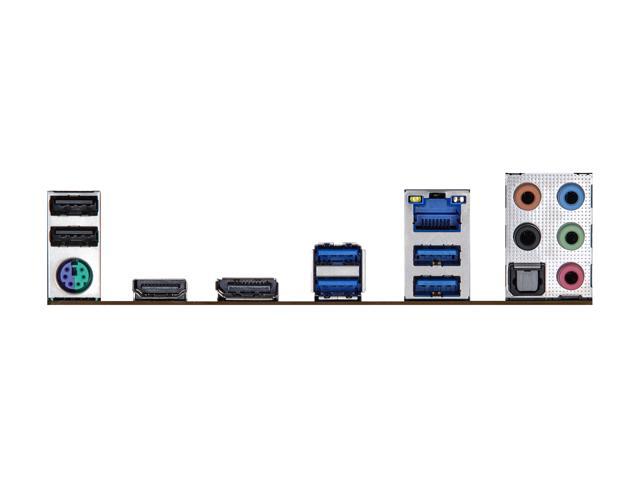 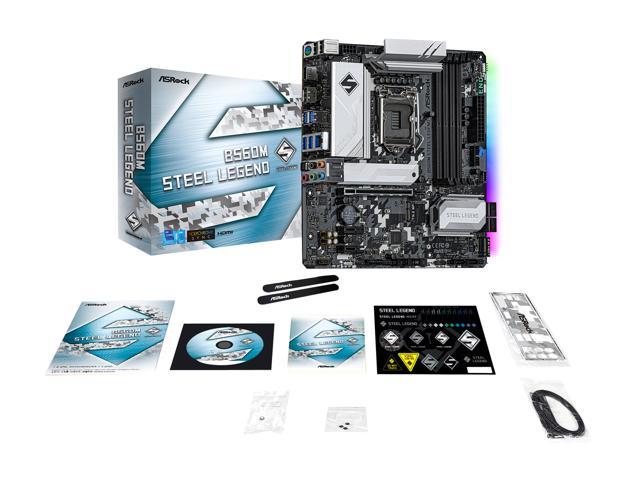 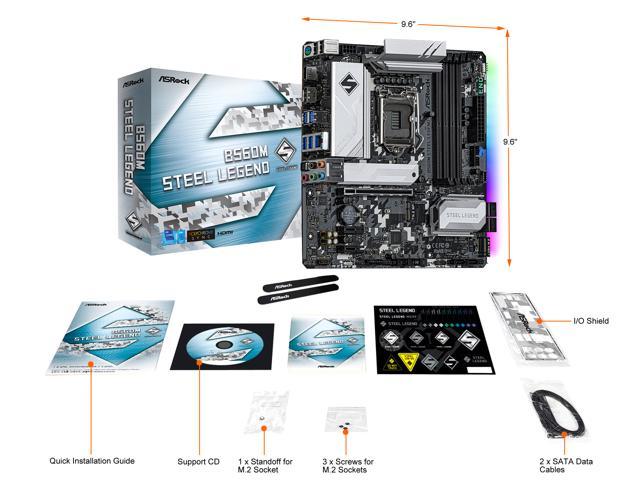 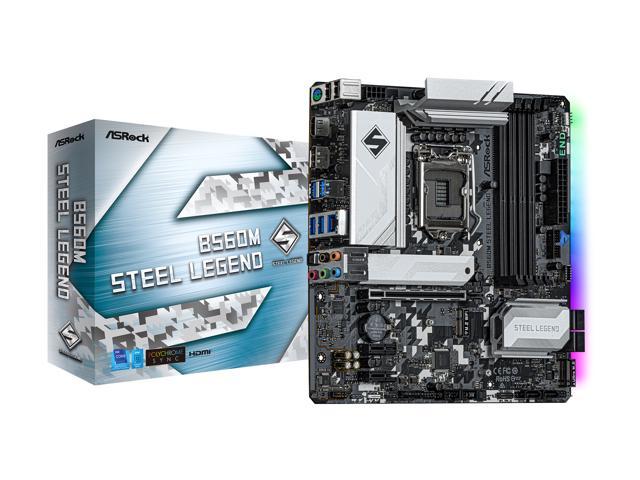 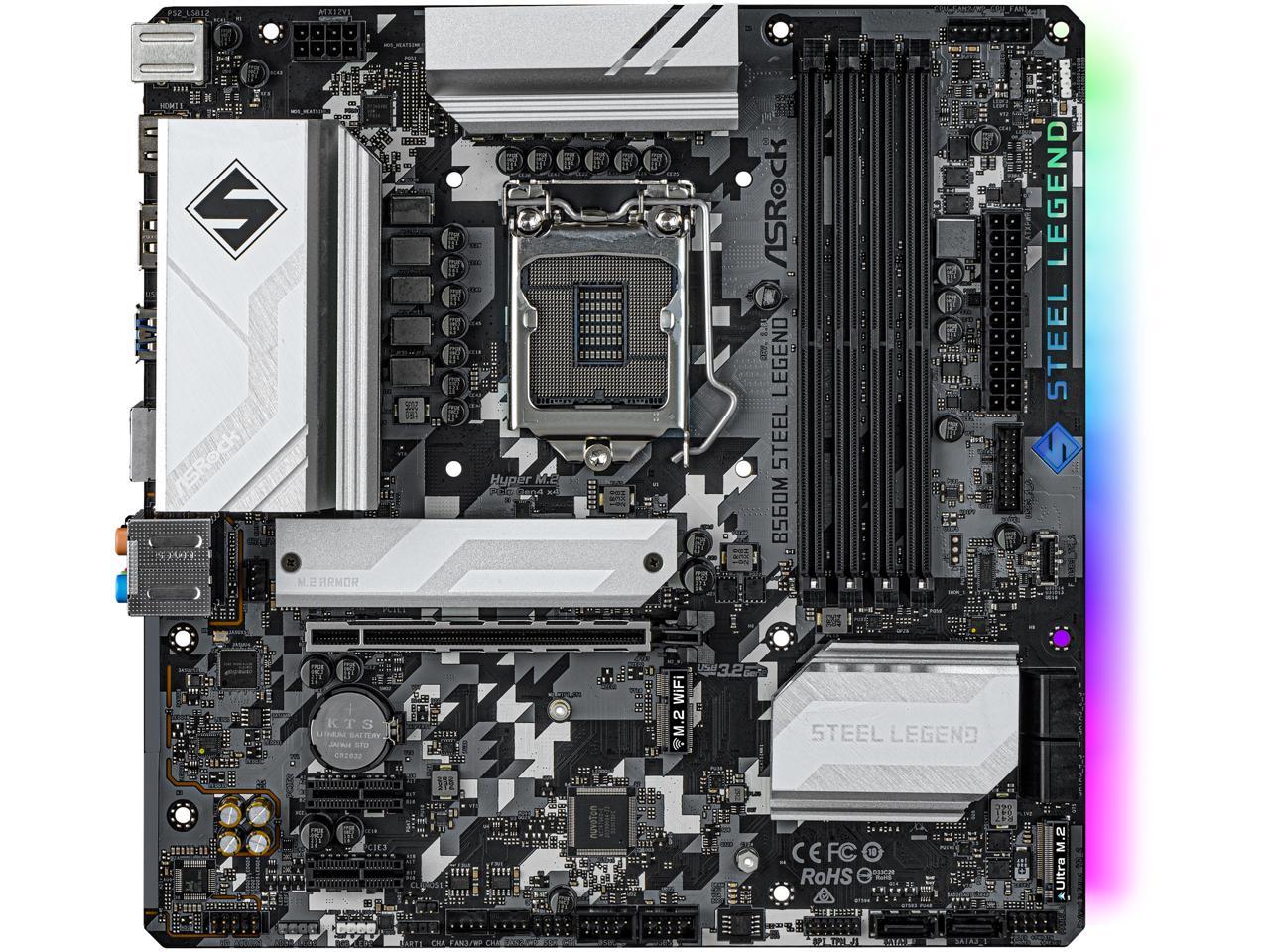 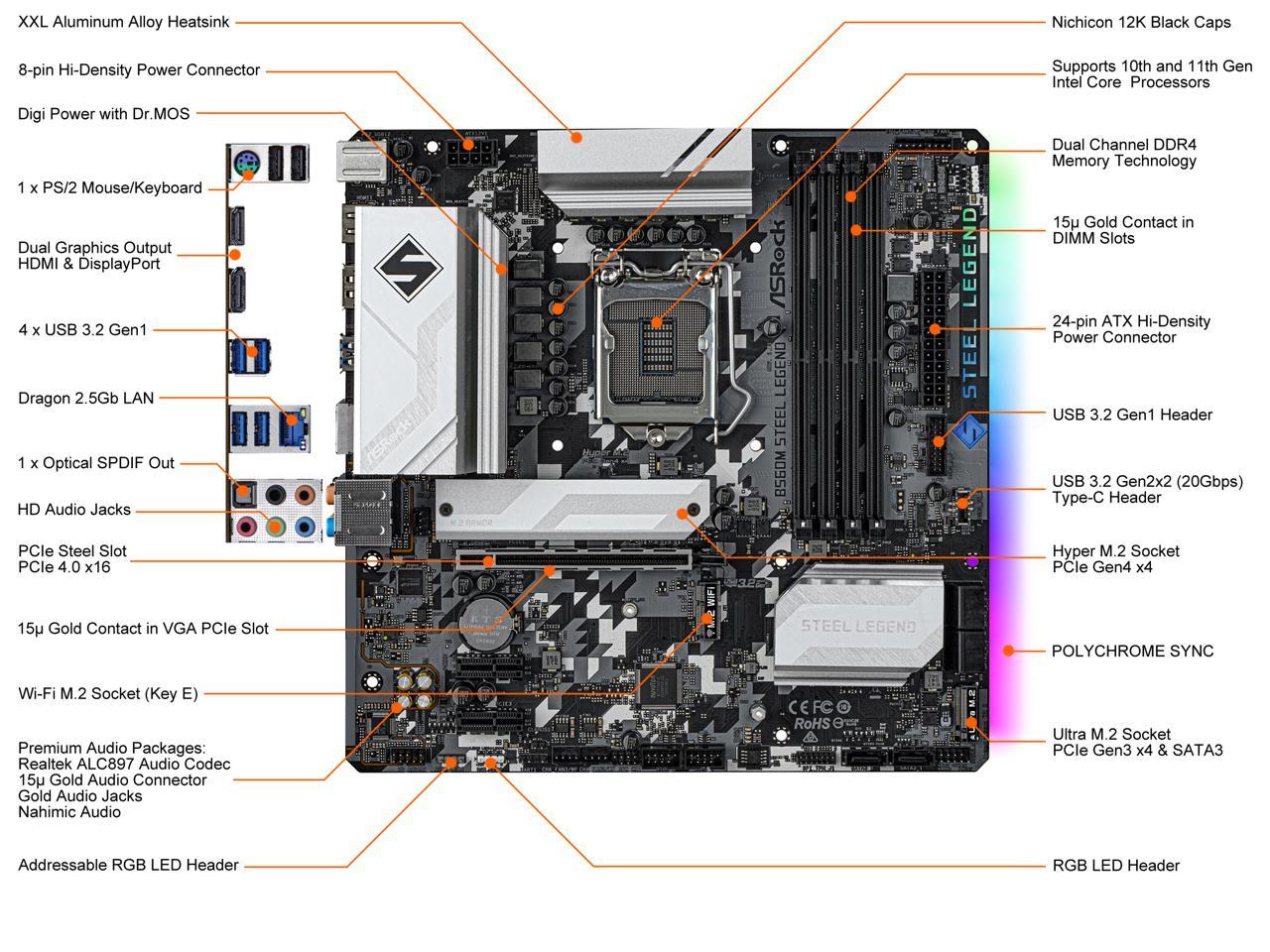 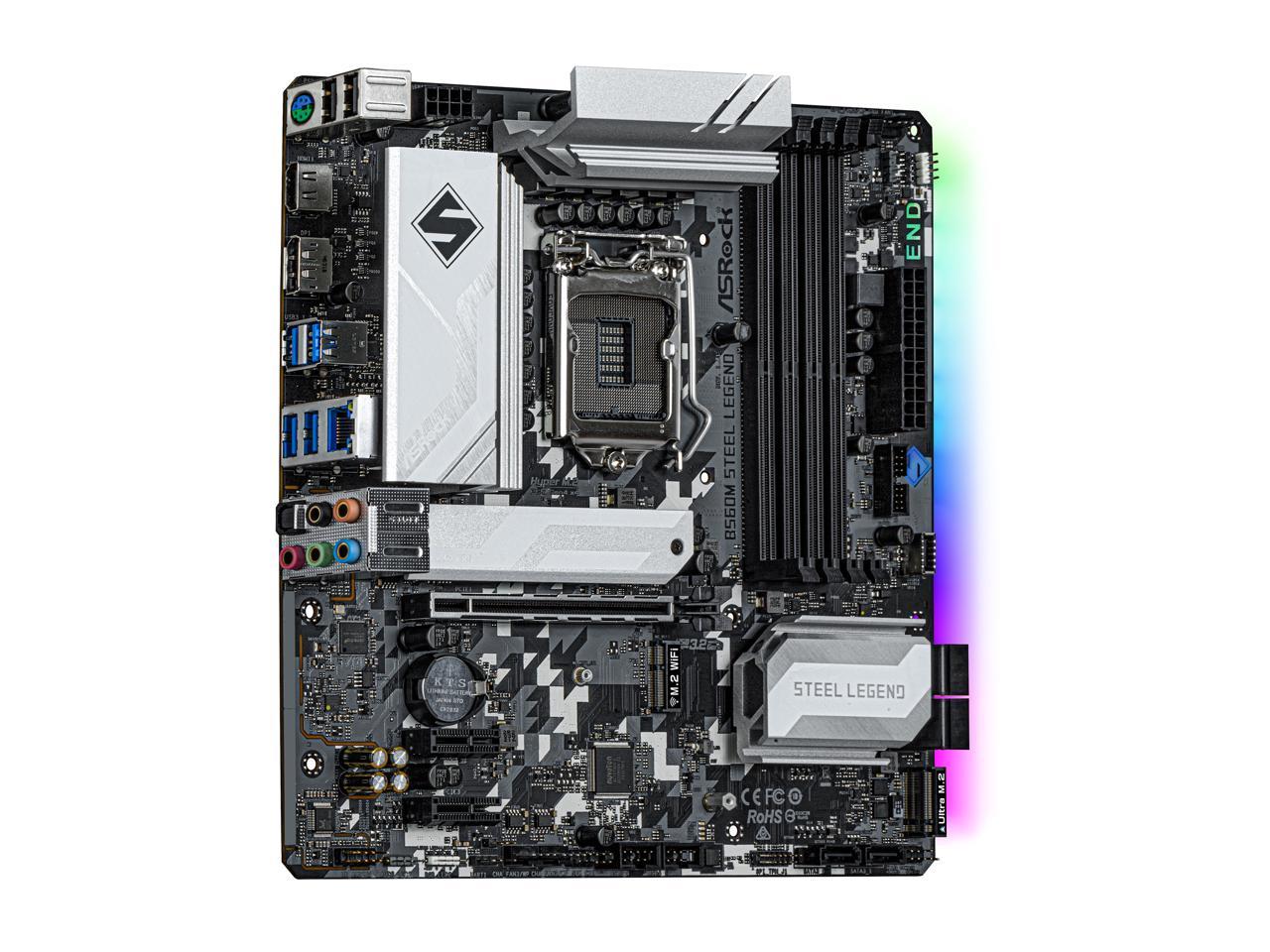 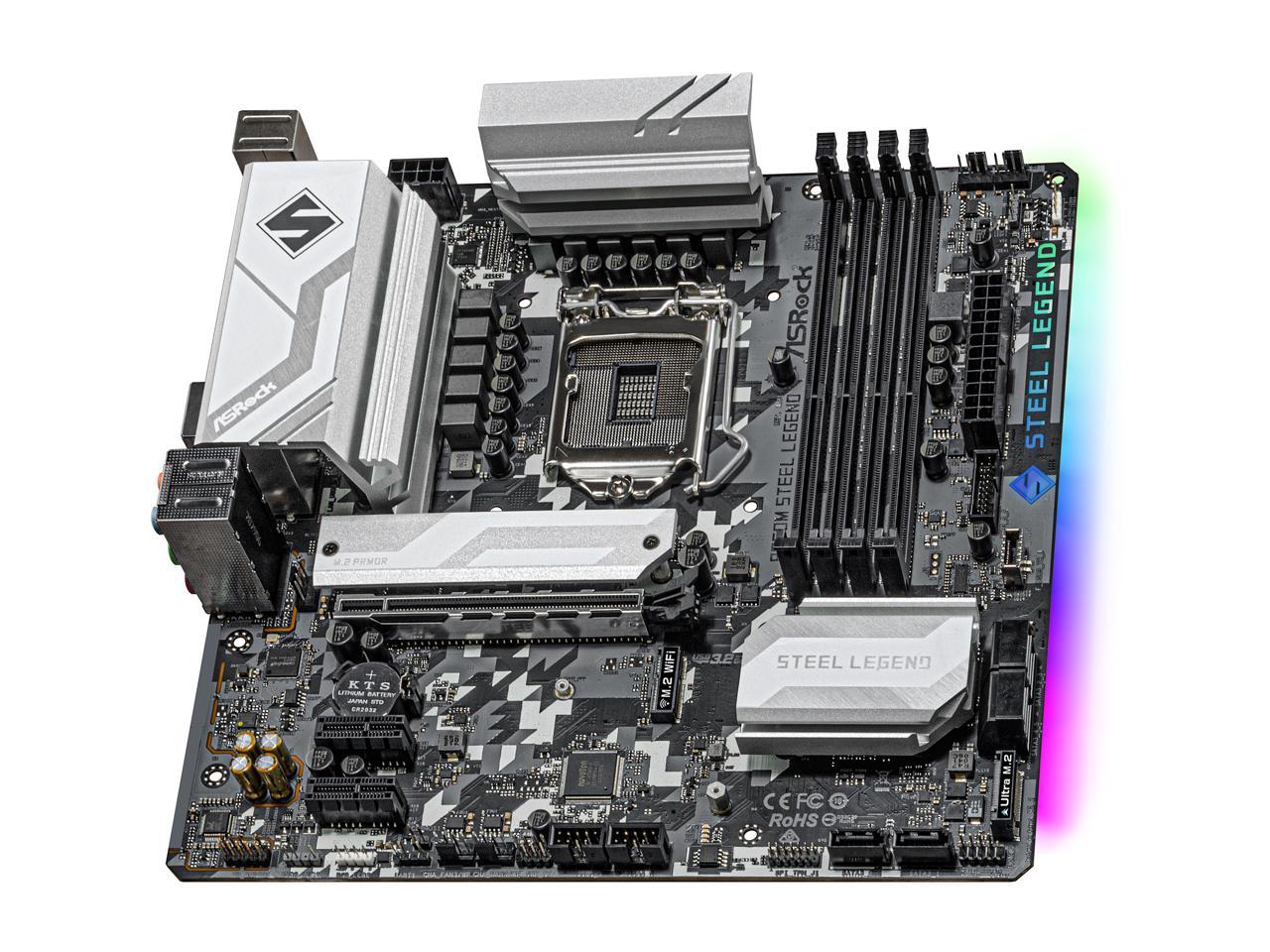 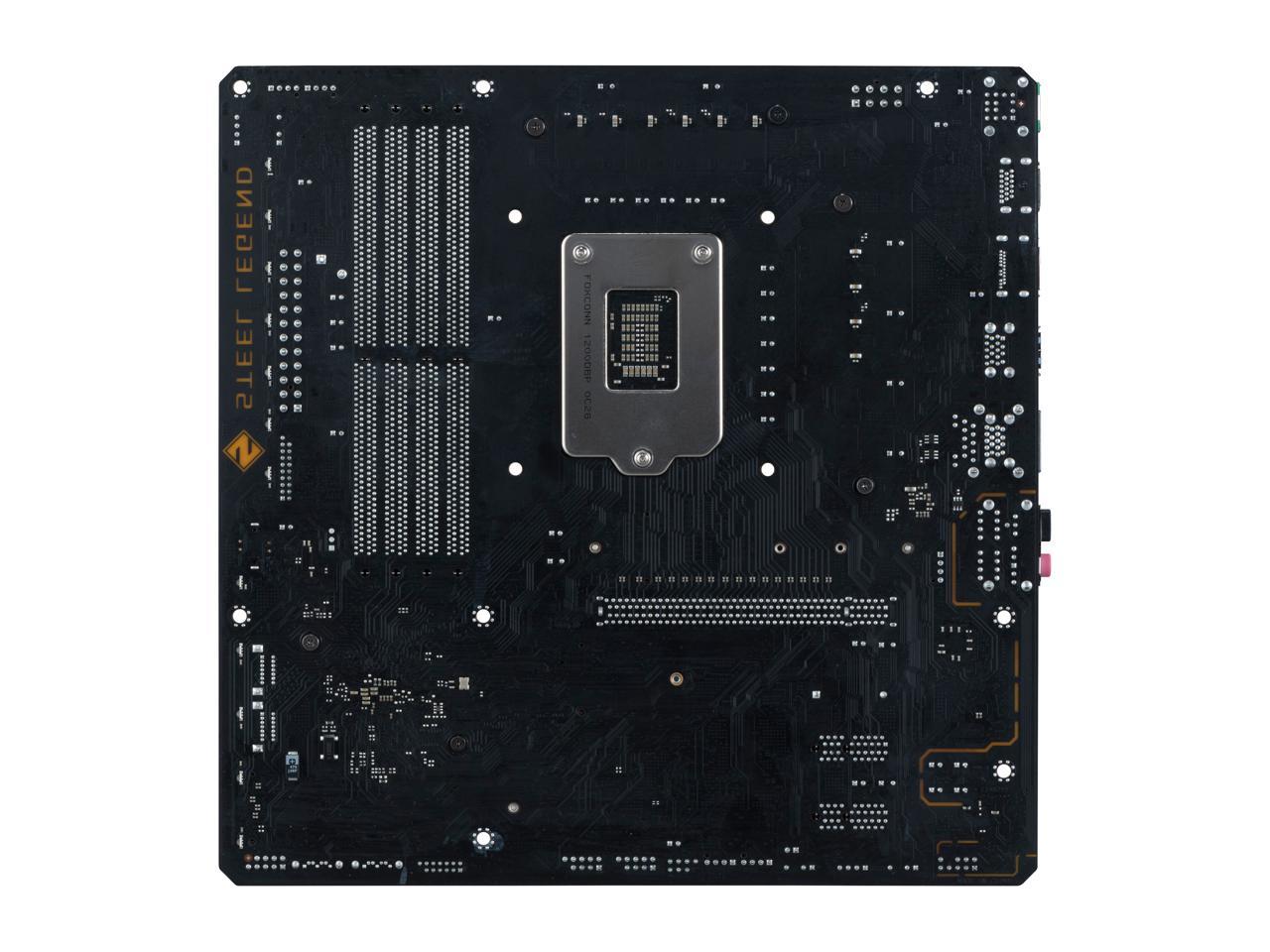 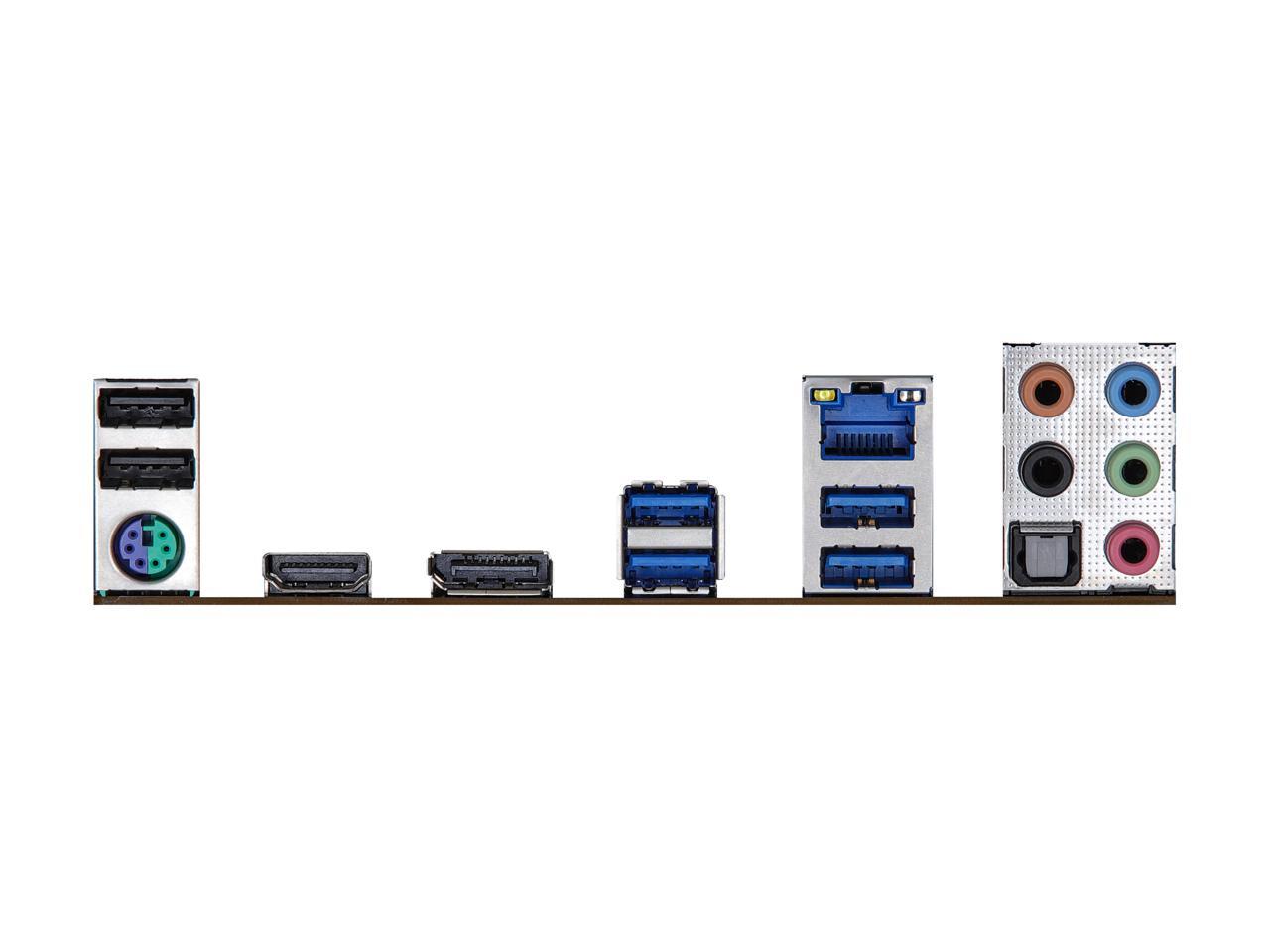 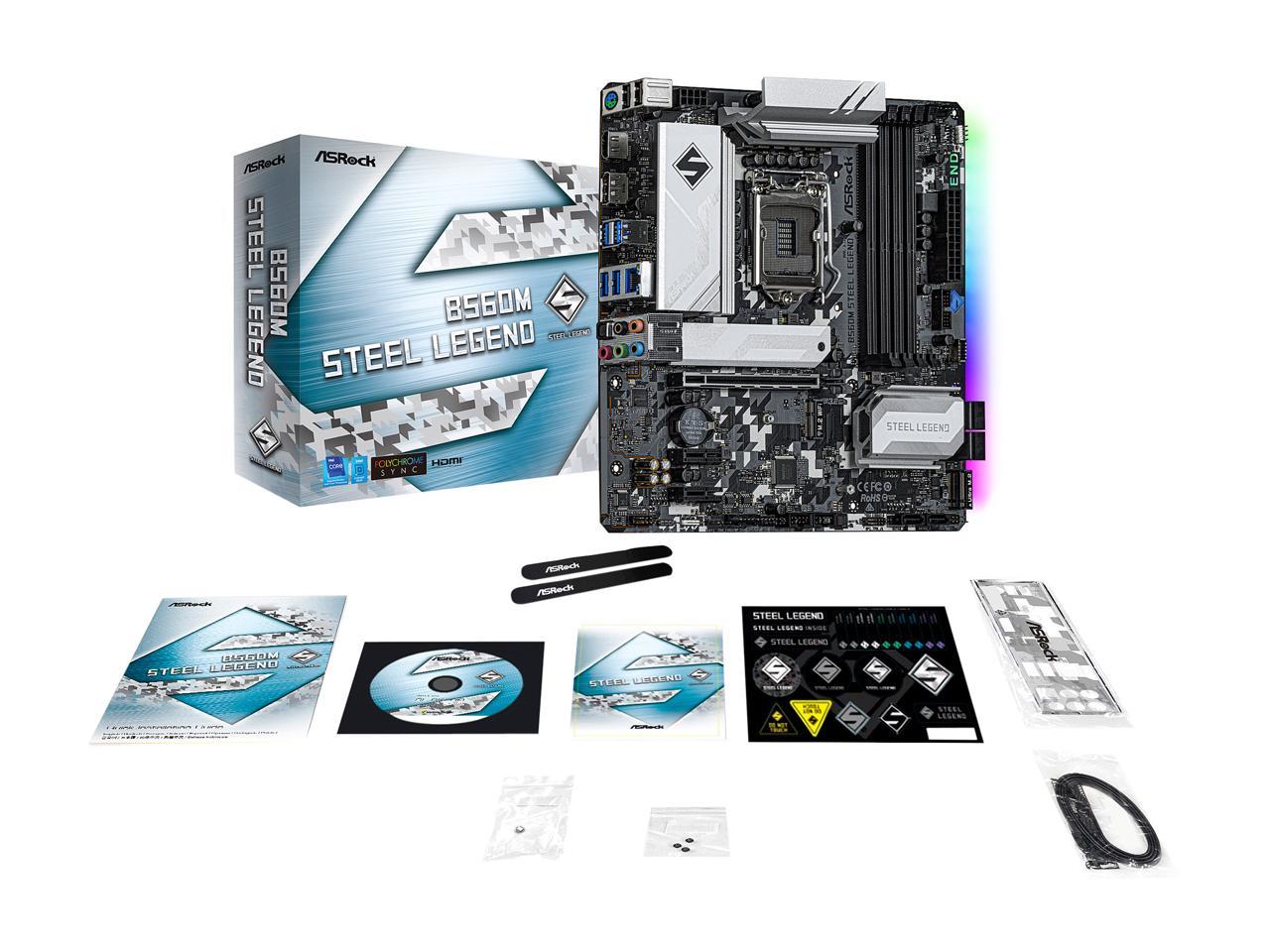 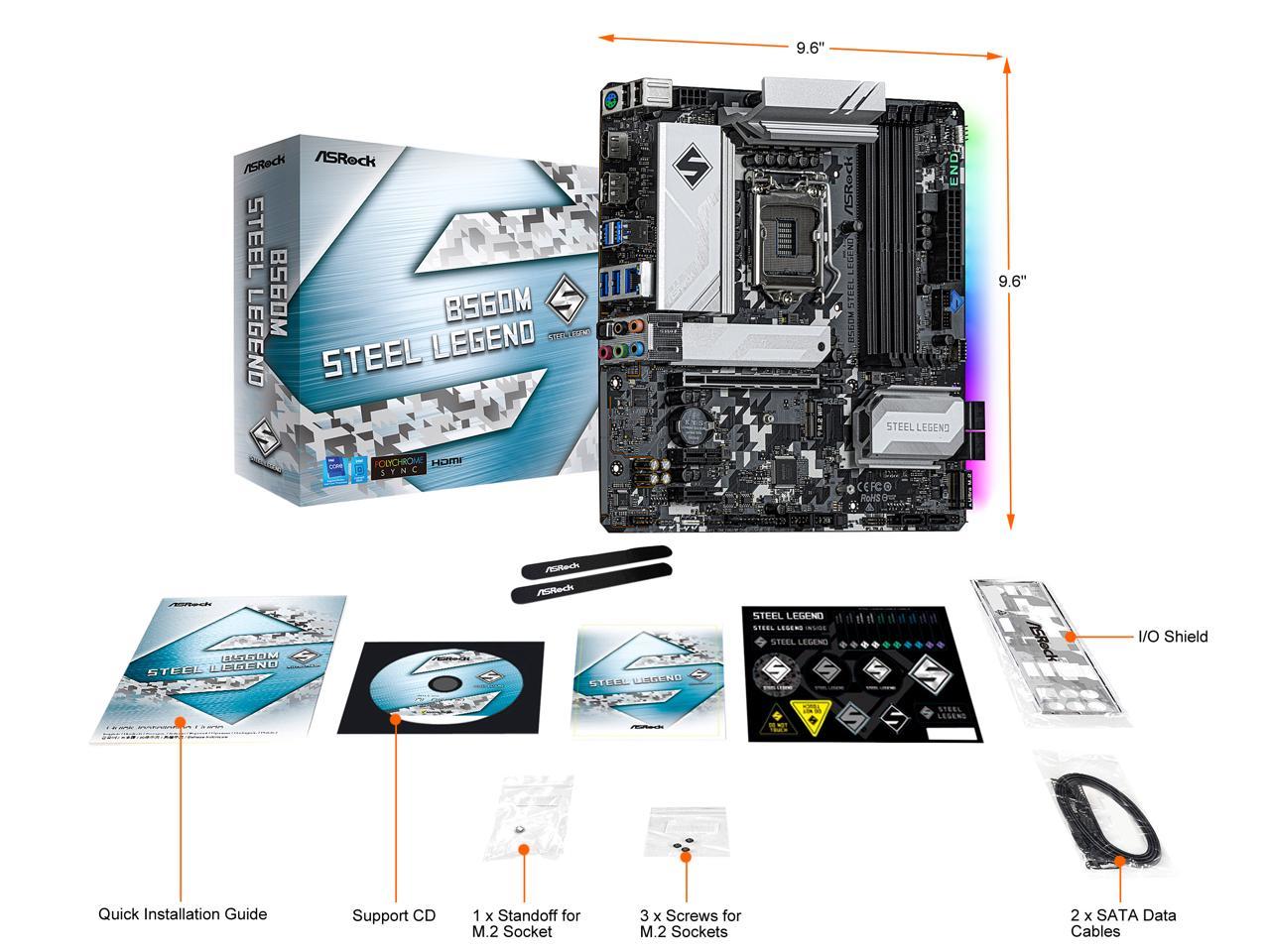 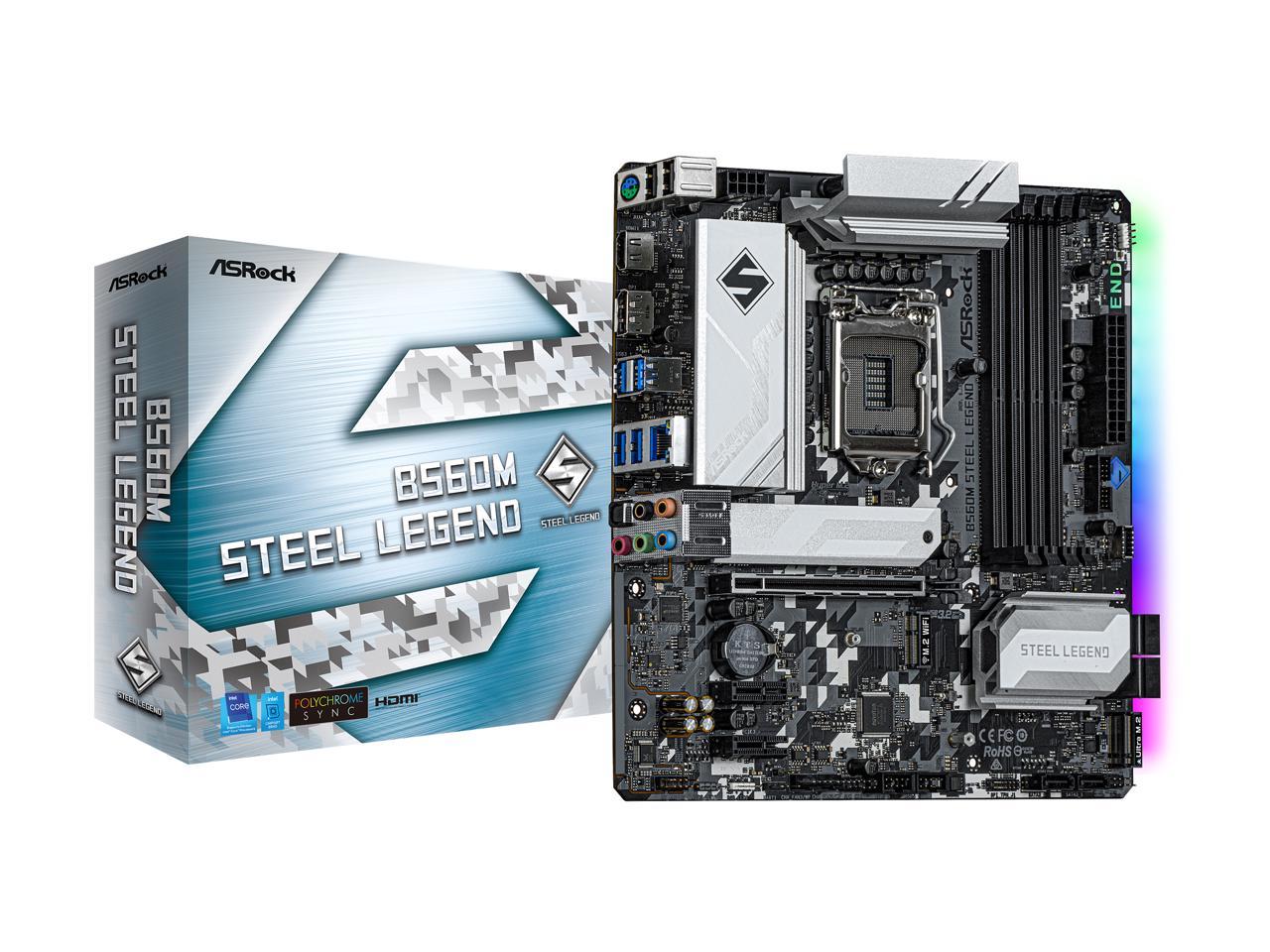 This Intel B560 chipset-based motherboard is built with robust power delivery design and Super Alloy components to unleash the full potential of the latest 11th gen Intel Core processors. It also brings ultra-fast connectivity like PCIe 4.0, USB 3.2 Gen2x2 Type-C (20 Gb/s), 2.5 GbE LAN, and more. And onboard lighting plus an array of heatsink make this micro ATX board a seamless match with other RGB enabled parts and accessories.

Steel Legend represents the philosophical state of rock-solid durability and irresistible aesthetics. Built around most demanding specs and features, the Steel Legend series aims at daily users and mainstream enthusiasts! Providing a strong array of materials/components to ensure a stable and reliable performance.

Conventional PC systems processor can only access a fraction of graphics memory and limits system performance. With Clever Access Memory, the data channel gets expanded to harness the full potential of GPU memory, removes the bottleneck and increase performance.

Who ever said that only K series CPUs and the Z-family platform are capable of being performed with maximum power. Via ASRock BFB (Base Frequency Boost) Technology, users may install their non K series CPUs to ASRock’s selected 500 series motherboards and enjoy the base frequency boost with the hidden power of processors immediately.

** BFB frequency performance results may vary between different CPUs and hardware configurations. Frequency shown in this chart is for reference only.

This motherboard is capable of accommodating multiple M.2 storage devices, one of which can even support next generation PCI Express 4.0 M.2 SSD, it is capable of performing twice the speed compared to previous 3rd generation, giving a lightning fast data transferring experience.

The latest USB 3.2 Gen2x2 Type-C delivers up to 20 Gbps data transfer rate which is 2x as fast as previous generation, providing a blazing fast data transfer interface with reversible USB Type-C design that fits the connector either way.

Automatically detects and accelerates game traffic ahead of other network traffic for smoother, stutter-free in-game performance and the competitive edge.

The reinforced steel slot comes with the next generation PCI Express 4.0 standard. The various benefits include:

? Make sure heavy graphics cards to be well-installed.

* Wi-Fi module is not included.

Whether you are using headphones, a headset, external or internal speakers, via USB, Wi-Fi, analog output or even HDMI, Nahimic Audio offers you the most engaging listening experience, vibrant and rich with details.

The Sound Tracker is a visual indicator that points out the directions from which predominant sounds are coming. Each sound is properly positioned in 360° on a radar for a full immersion during the game.

An easy troubleshooting tool that shows the CPU / DRAM / VGA / BOOT operation every time you start up the system. Post Status Checker is a fast and easy way to identify the source of the problem.

Extra large aluminum alloy heat sinks that effectively take away heat from the MOSFET and chipset so that your whole system may perform more stable.

This is not only a standard CPU fan header, but also supports water pumps! This header provides a maximum of 2A power for supporting the most popular water pumps. User also can adjust the voltage of water pump to get higher cooling performance with lower noise.

Cons: - VCCSA voltage cannot be set properly with old BIOS version, resulting in a lot of frustration when tuning DRAM settings - VCCSA voltage can be as high as 1.52 V on Auto, even with new (1.80) BIOS version - The old version of the BIOS did not support 3600 Mhz RAM speed, so the XMP profile defaulted to 3466 Mhz. The newer BIOS supports 3600 Mhz, but only for Gear 1. - CPU undervolt limit is -100mV in BIOS, which my CPU is completely stable at. It would be nice if this limit was lower. Not sure if this is an Intel requirement. - The top VRM heat sink interferes with a 140mm fan placed at the top rear of my case. A 120mm fan fits. Not a big deal, and more of an issue with my case.

Overall Review: Used with an i5-11400 w/ Arctic 12CO cooler and 2x8GB 3600 Mhz CL16 RAM. Install was straightforward. Out of the box, the CPU power limits are much higher than the Intel default, and probably higher than I would recommend with a stock cooler. I spent an extensive amount of time overclocking my RAM and tuning the timings. I recommend updating to the latest BIOS before doing this, as there is seemingly a bug that affects VCCSA voltage (which affects stability at higher memory clock speeds). The VCCSA voltage offset can be set, but the voltage will still vary in unpredictable ways upon system reboots, which can lead to boot issues, or previously stable settings becoming unstable. The newer BIOS (1.80) eliminates this variability, and allows you to set a fixed voltage. However, if left on Auto, VCCSA can be as high as 1.52 V, which is dangerously high. I also recommend to change a couple of settings related to memory training at the bottom of the DRAM page in BIOS. Set them so that memory training is never skipped, at least while testing new settings. Also, disable ASRock Timing Optimizations. I did some testing of system power consumption at idle in Windows 10. With the default BIOS settings, using onboard video, and my RAM at set to 3466 Mhz Gear 1, I measured 32 W at the wall. Enabling some different C-state settings, and disabling the onboard LED lowered this to 27 W. With the RAM in Gear 2 mode at 3733 Mhz, the system idle power dropped to 24 W. With DMI Link Speed changed from Auto to Gen1, idle power dropped to 21 W. This setting does not seem to have any effect in performance benchmarks, or SSD or USB 3.0 transfer speeds.

Overall Review: i7-10700 performance improved 10% (compare to Dell XPS 8940, same cooling) due to the better power condition on this MB.

Cons: My only gripe so far has been the Linux support for the B560 chipset has been a little spotty. Manjaro 21.04 will boot, but there are problems with display output and I can't be bothered to fix it for install. I read that this is common at this stage with the newish chipset. I was able to get Ubuntu 21.04 running and installed with no fuss. There are also problems with power management (the machine has a hard time waking up in Linux), however, this should all be ironed out in the coming months. I took off an egg for this, because manufacturers need to know that Linux support at launch for products is important to consumers! I am a professional user and Linux support out-of-the box would be a boon to me.

Overall Review: I needed to build a new workstation for VM labbing. This board met the requirements i had for this project. - Drive a 3440x1440 100hz monitor (DP 1.4 on an Intel UHD Graphics 630 Supports this, and the motherboard specs support it) - Integrated GPU - Supports 128GB memory - supports multiple m.2 drives - Nested virtualization - Latest chipset to allow a possible CPU upgrade I took advantage of the sale on the i7-10700 and paired this board with one of those. I am satisfied with the performance. This board is very fully-featured. It makes me wish I had shelled out extra for a k-CPU, but i didn't really need it. The board can make even my plain Jane i7 just scream at 4.6Ghz on all cores - aftermarket cooling is required! The LEDs on the back side were kind of an extra i didn't really think about when I bought it - this was the last board NewEgg had in stock at the time i ordered that met my requirements. However, They have kind of won me over. It's just fun.

4 out of 6 people found this review helpful. Did you?