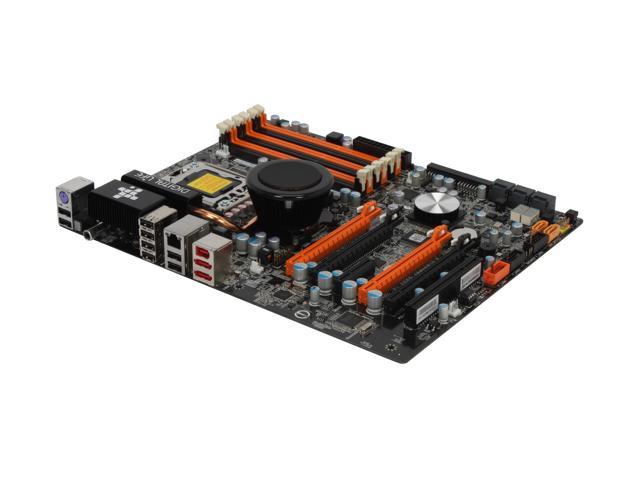 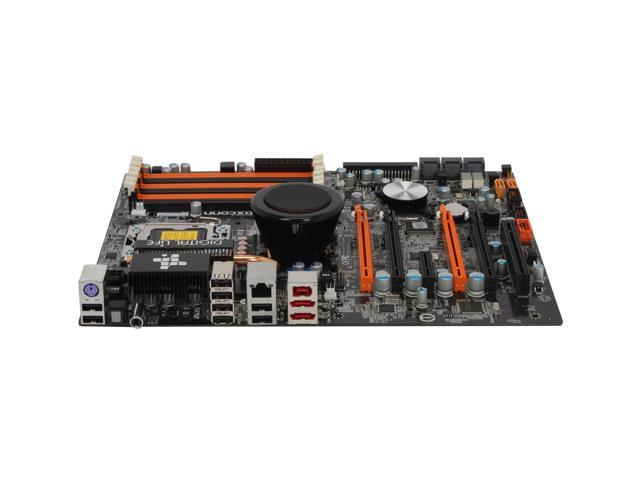 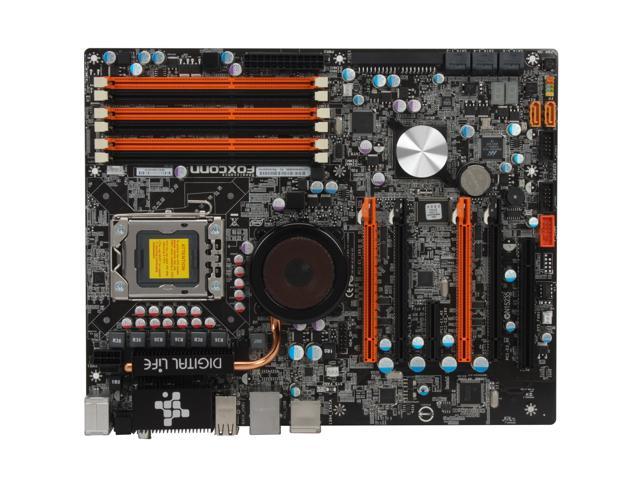 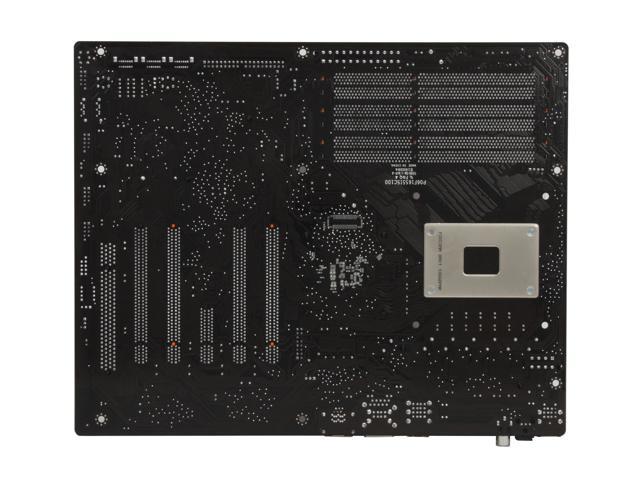 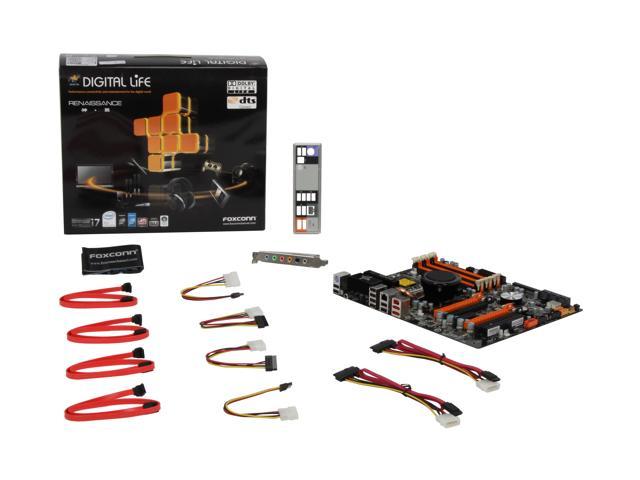 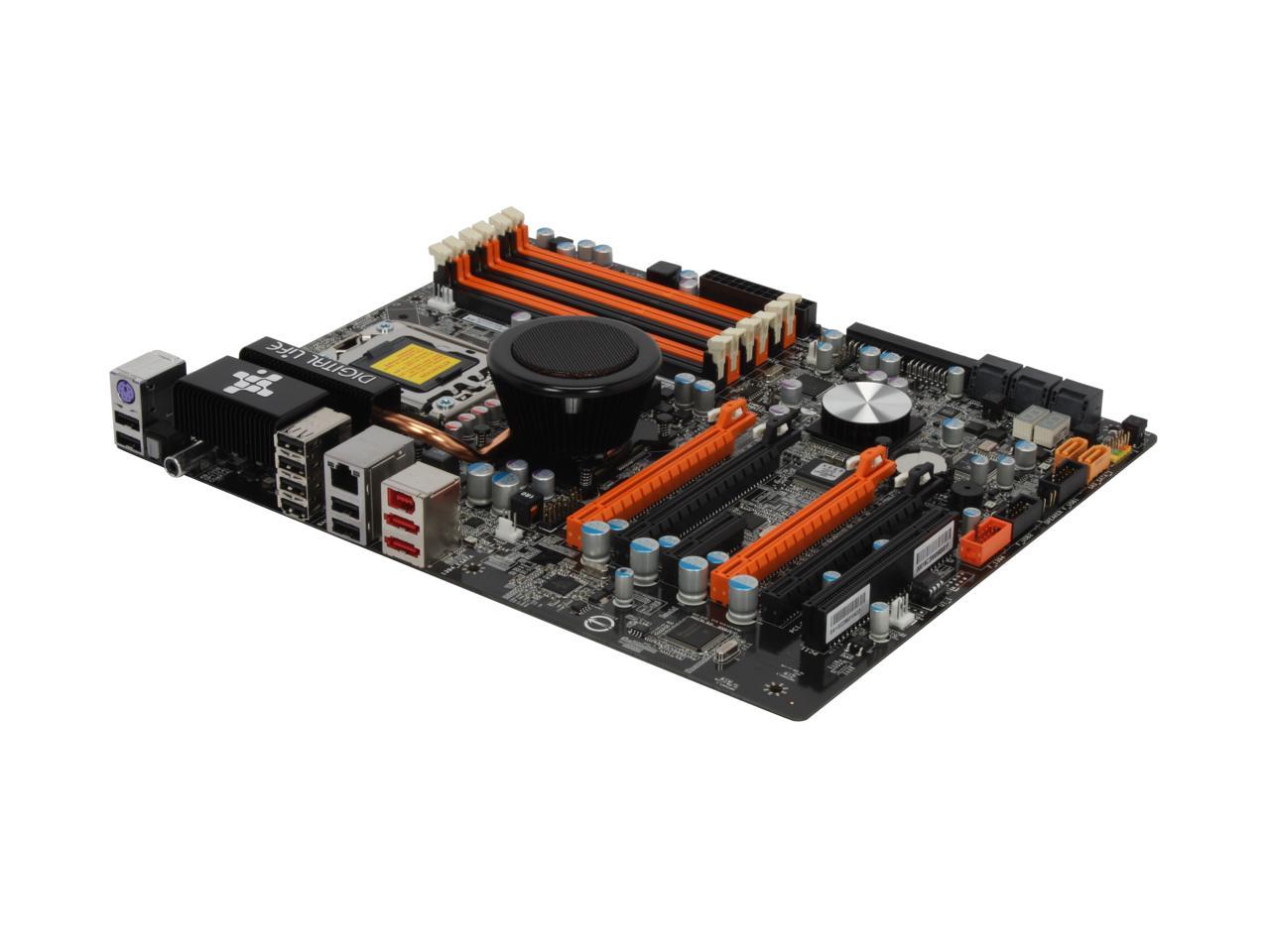 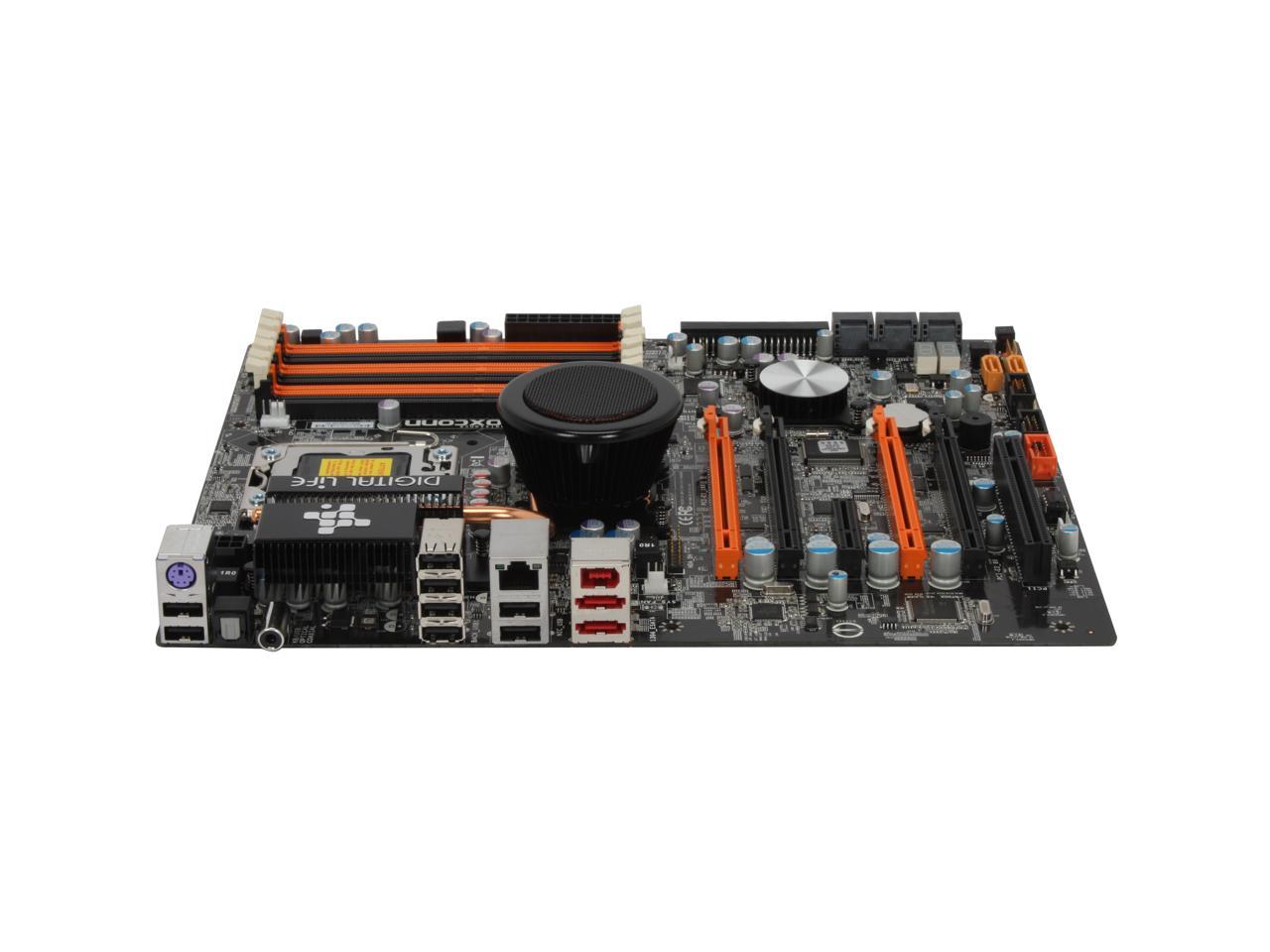 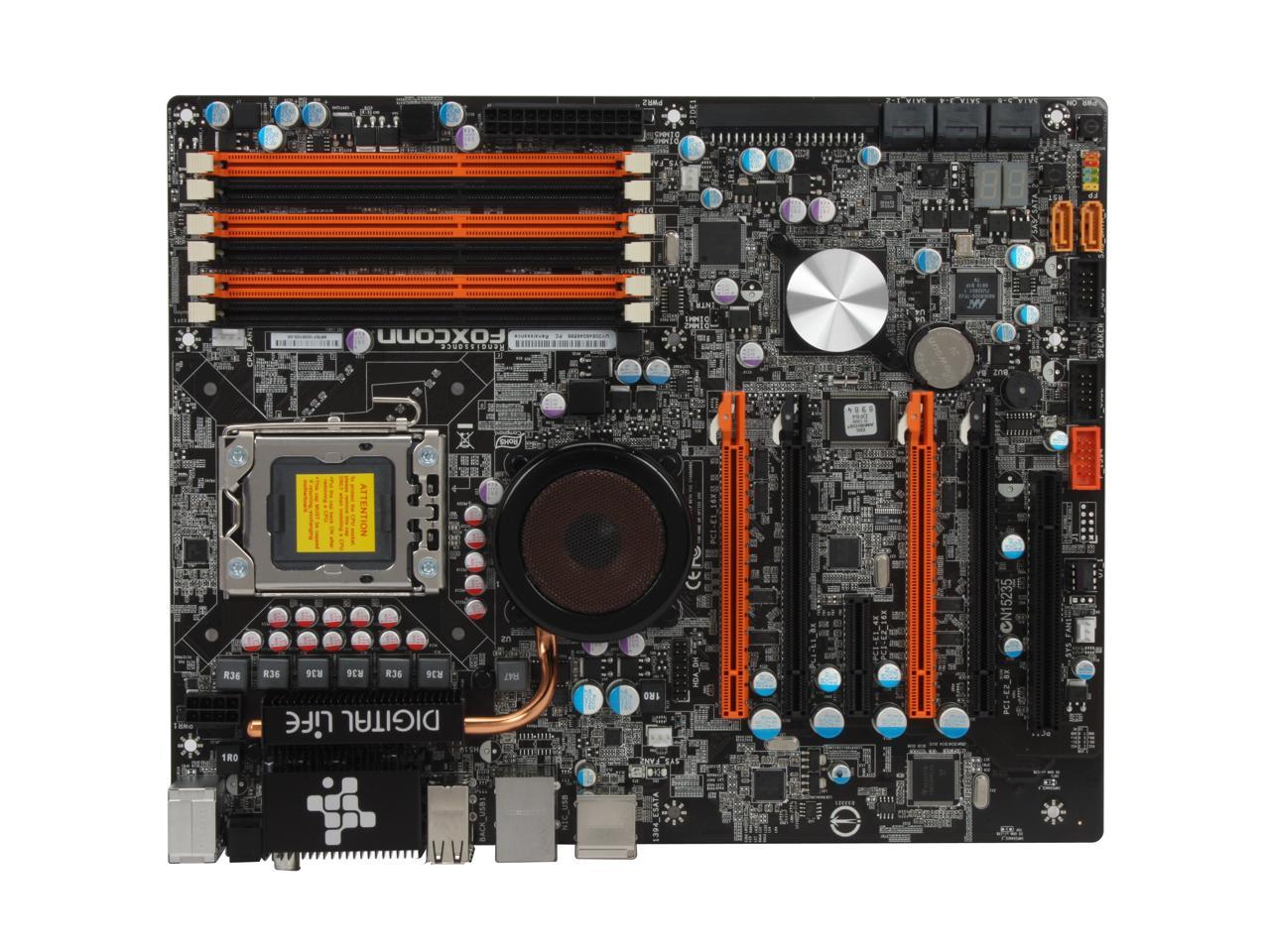 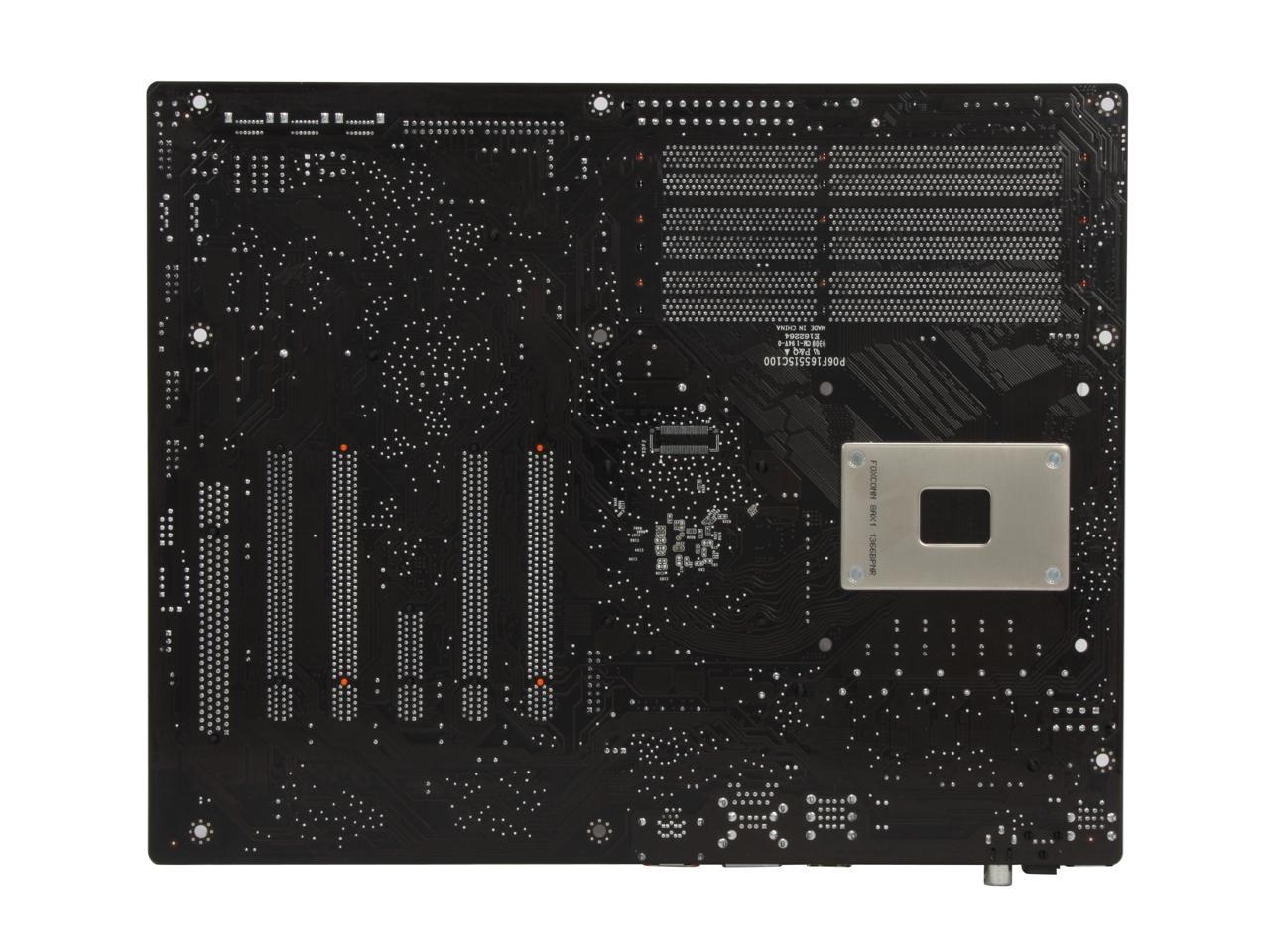 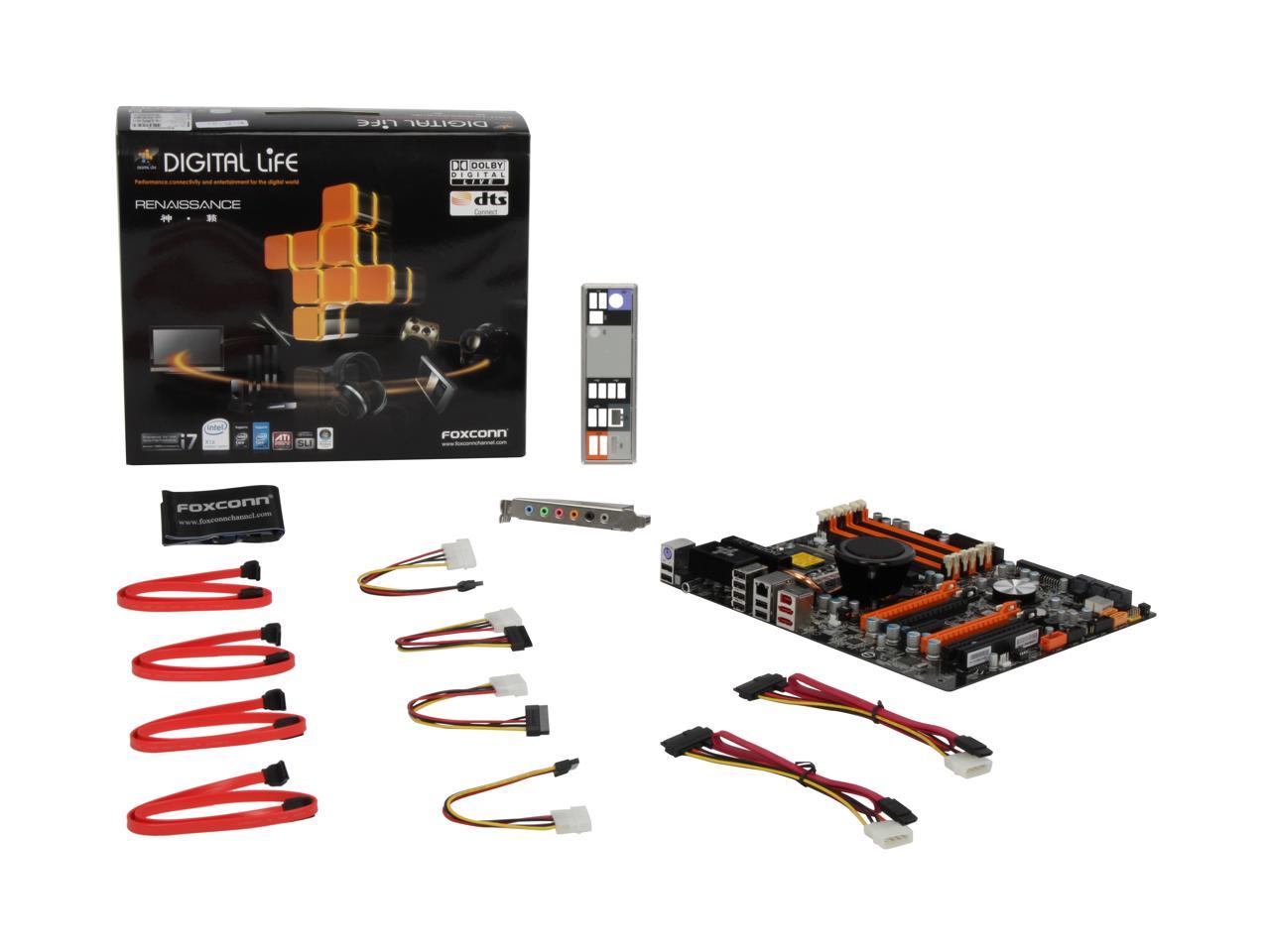 Learn more about the Foxconn Renaissance

Pros: I contemplated over this board and the others capable of SLI for weeks, this is the best layout of them all (see comments) Dropped in a 920, 3gb of 1333, and 2/GTX260s, booted right up. Bios check said everything was seen as it should. Had Vista/P64 installed in ~20min including drivers. **drivers.. take it from an old man who's seen too many builds, install drivers manually if possible.. just drivers, unless you feel you need the addons.. and install your chipset drivers FIRST.** Went in bios for a simple OC to 965 speeds (lol, had to make sure I could get that $700 savings) and it was effortless.. Couple cycles of Prime95 and back to stock.. (custom bracket being milled for the Enzotech Extreme won't come in for another week) Performance.. this setup screams!.. Every game is silky smooth with everything maxed! (COD4,Fallout3,Farcry2,Crysis,L4D,EQ2,DeadSpace,Grid,AssassinsCreed,HL2,Oblivion) nothing slows it down.. ~at least at 1680x1050 anyway, new monitor is on the horizon..

Cons: No cons at all.. Well maybe that the clear cmos button is located under the second gpu. (Foxconn hinted that due to full 16 tracing to all slots, it is possible to do 16/16 in either pair (orange/orange OR black/black) though I haven't taken the time to test it yet.. This will not provide the ability to do 16/16/16/16 of course, but if you can in fact do 16/16 using the black pairs, then nothing on the board would be blocked and I wouldn't have any cons at all..)

Overall Review: The Foxconn Renaissance and ASUS P6T Deluxe are the best layout for progressive upgrading.. The problem is cooling.. Most high end cards are dual slot coolers with gpu-side intake fans.. this means that two cards positioned in the x16 slots offered by the other manufacturers choke the first card. Single slot coolers on many low end cards will fix that, but you could'nt consider that a high end gaming rig.. The Asus Deluxe provides 2/5/6 spacing which is good for the first two cards, but limits you in the long run with the same three card max as others do.. Liquid cooling is the high end solution on all the boards to take full advantage of their platform.. and that is where Foxconn came through to provide the best expansion layout of the group. When the time comes for more than 16/16, you acquire your liquid cooling hardware and then you get to do 16/8/8 and 8/8/8/8 all without having to change your MB and still have some slots available.. Bravo is all I can say to that, Bravo!.

Pros: This board does support SLi. Download the manual in .pdf form from Foxconn and read page 115. Great price, comparatively speaking. Nice layout, works well. I like the colors too. It looks good with a couple of black/orange EVGA GTX 260 cards installed.

Cons: Silly NB cooler. 1st + 2nd and 3rd + 4rth PCI-e 16x slots are too close for my taste. You'd need to use water cooled cards or cards with a single slot cooler in them. It's fine for regular SLi with dual slot cooler cards though. Just use 1 and 3.

Pros: Great board for entry level i7 setup, or moderate overclocking to achieve a savings over the next higher series cpu. Have 920 running at 3.33ghz with nothing but a QPI bump to 166. No voltage changes what so ever, bios handles everything else perfectly, and Corsair XMS 1333 running at 1333. That saves you $700 right there over the 965 cpu.. =)

Cons: Some ports covered by a second graphics card, but not a big deal in some cases.. depends on how many drives you need to run (and you should probably be planning to pick up some larger faster drives anyhow, heh)

Overall Review: This motherboard DOES NOT REQUIRE HIGH VOLTAGE MEMORY!!! There isn't a triple channel memory pack on the face of the planet that needs 1.9v...... There is triple channel memory specifically for the i7 cpu's folks.. they all achieve their speed (up to 1866mhz) at 1.65v. Do your homework before you scare people with what you had to do with your old dual channel memory please (poster below)..

Pros: This board does everything that it says it does. You just have to be patient and red the directions. It tells you that you have to put the sticks of ram in certain slots reminiscent of the old rambus configuration. Read the manual carfully it is well written and detailed. And I dont want to forget that foxconn tech support responded quickly and well informed for me right off the bat. I have never been happyer with A motherboard purchase. All of the features of boards costing much much more for almost half the price.

Cons: If you dont read the directions it wont work right,not realy a con though

Pros: Nice layout. Easy to flash bios from Windows. Bios easy to use. I didn't purchase for O.C. Came with SLI bridge (not that I'll be using it). Cost was similar to an AMD AM3 board I wanted and the i7 cores are kicking the Phenom II chips, which is why I switched back. The extra cost was worth the extra power.

Cons: Needs support bracket built in like my AMD boards have considering the cost of an Intel board. Have to disable the onboard audio in Windows even though it's been turned off in the bios. SATA connectors do not accept locking cables.

Overall Review: For Foxconn: SATA cables included are too short, even if I wasn't using a server tower. Get rid of the internal IDE connector. Ditch the onboard audio. Upgrade the firewire to the newer standard if you're going to offer firewire. The oversized chipset cooler. Prefer to flash the bios from a usb drive from the bios menu system instead of having to boot into an operating system. I'm not pro-Intel or AMD. I switched to an opteron 242 from a dual PIII and held out with the AMD 9850, but AMD dropped the ball and I'm not going to stick with them for this kind of cash. For a mid-level (family) machine, they're very cost effective, but not for this. Intel Core i7 920 Foxconn Renaissance Western Digital Caviar Black WD5001AALS POWERCOLOR 4650 1GB Radeon HD 4650 1GB G.SKILL 6GB (3 x 2GB) 240-Pin DDR3 SDRAM DDR3 1333 PLEXTOR 20X DVD AFT PRO-35U All-in-one USB 2.0 Card Reader

Cons: Bad for overclocking. The only voltage controls that you have are ram, v core, vtt core, and north bridge. No qpi or PLL voltage controls. No adjustable ram multiplier, and no qpi multiplier. And what's with the 4 pci e x16 slots? you cant use all 4 with normal graphics cards, only 2. And when you have a motherboard error, the board gives an error code like E8 or 08, but neither the manuel nor the website have translations for what that means!

Overall Review: If you're not going to overclock it's fine and I didn't have any hardware problems. But if you have any intent on overclocking, it's lack of features and controls severely limits it. Get a known overclocking brand.

Pros: Excellent board for overclocking. The FoxOne tool available on the manufacturer's website allows for pinpoint accuracy in overclocking this board. Smooth setup.

Cons: Documentation leaves a bit to be desired, but that's typical of most. One system fan header sits underneath the Harp audio riser, so I had to flex it a bit to get the fan connected, poor design on this, but it's a minor thing.

Overall Review: Overall it's a great board, and seems very stable so far. Be sure and take the plastic off the board in two places, I almost missed one of them in dim lighting. No problems so far with the Harp audio. Running: This board I7 920 Processor G.Skill F3-12800CL8TU-6GBPI (3x 2GB DDR3) XFX GeForce GTX 260 Black Edition

Pros: After updating bios to P10 and loading optimized defaults in the bios the re-installed Vista x 64 this board runs very stable. The reviews at Toms stated that all of these boards were in pretty bad shape bios wise kinda like the i875 chipset the first 800mhz FSB. But by no means is this board's bios done yet. It ships with a QVL DDR3 list I bought Patriot PVT36G1600ELK 6Gigs not on the list but works.

Cons: Won't boot from Sata DVDrw connected to the raid controller if raid is on. Had to put an IDE drive in to load Vista. Didn't check the SAS controller in IDE mode. It wouldn't be fare to trash this board yet because its a big jump in technology and you just got to give Foxconn time to fine tune the bios for the higher speeds. I'll bet they're all still tuning big time.