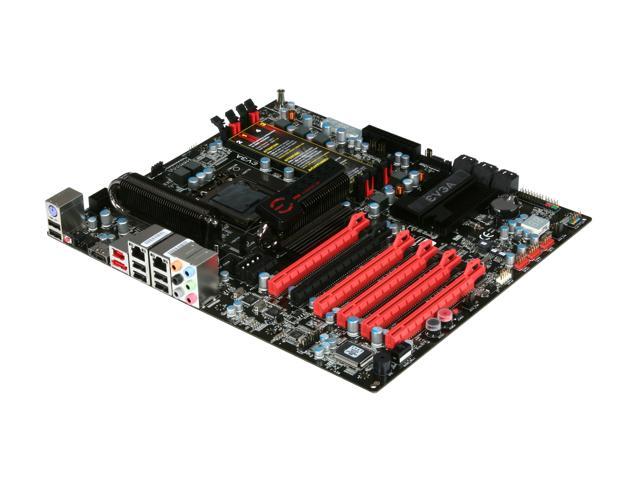 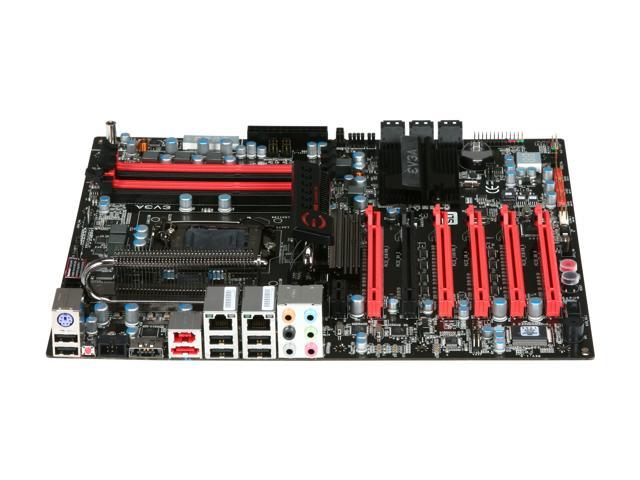 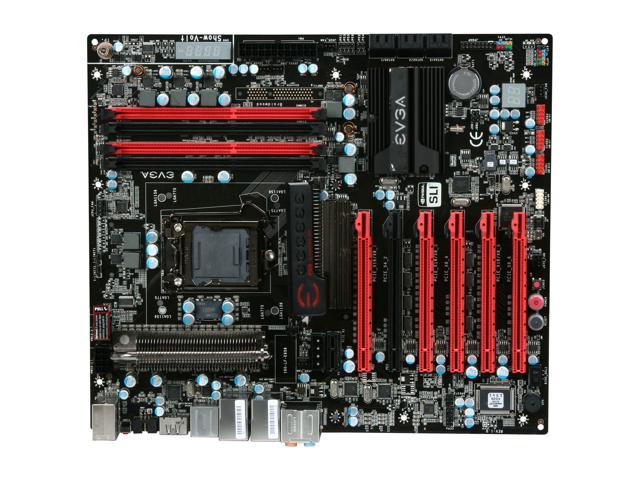 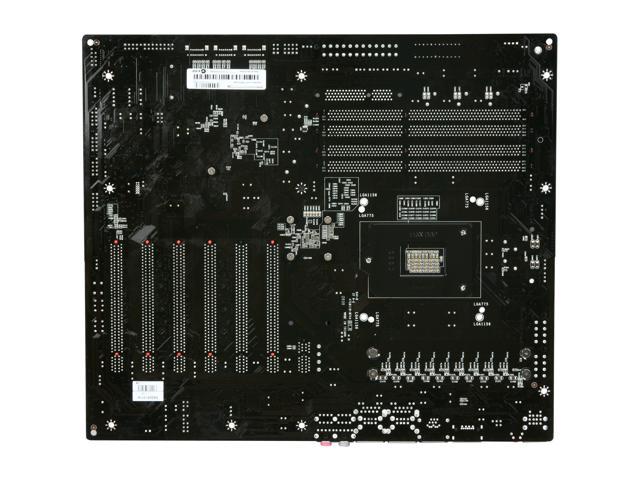 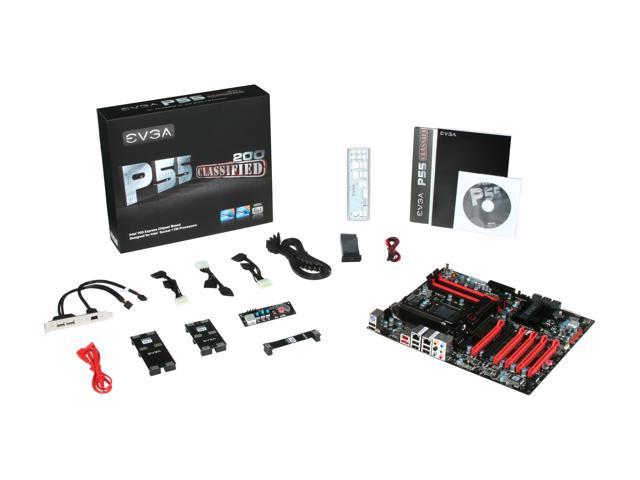 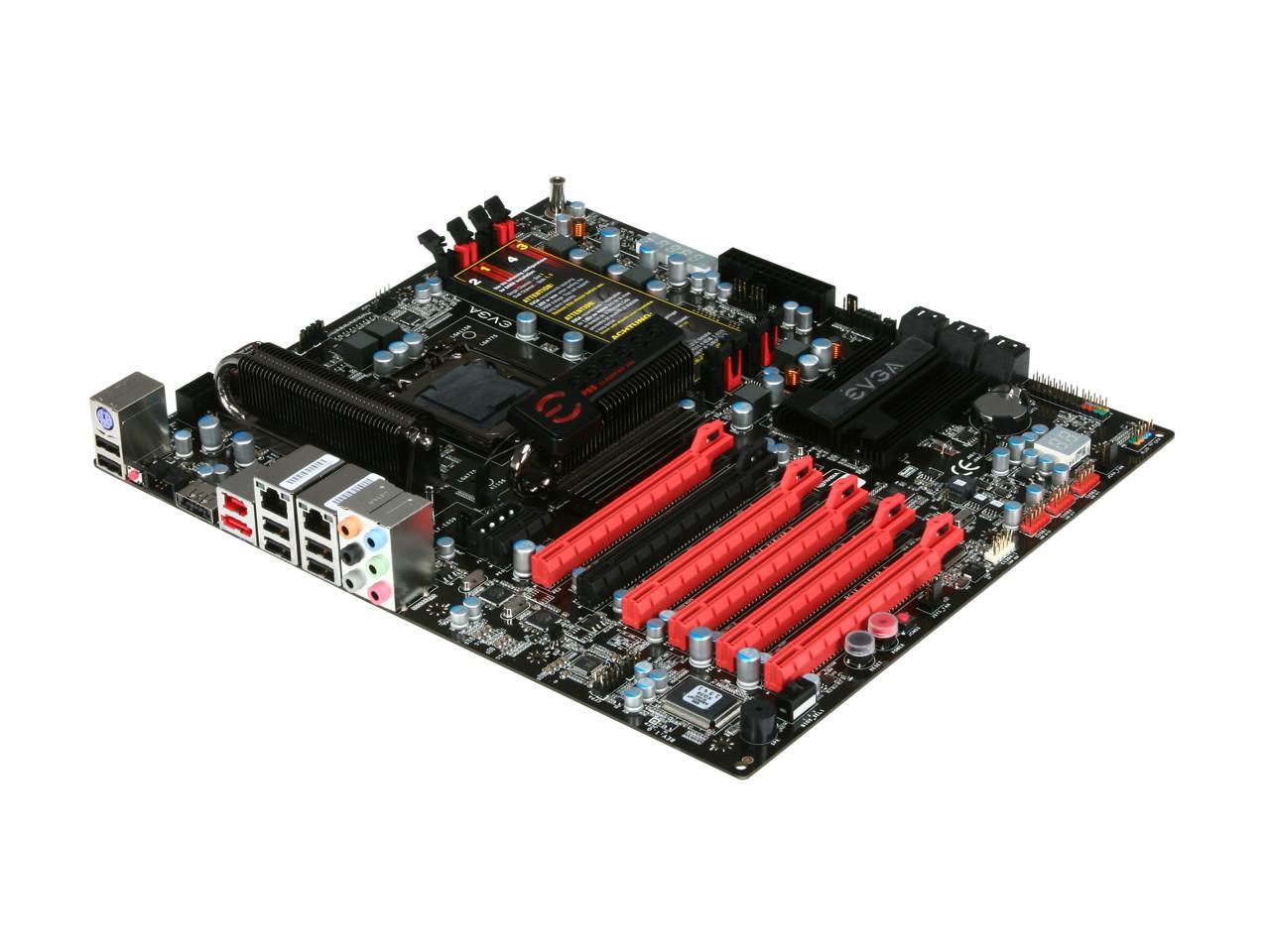 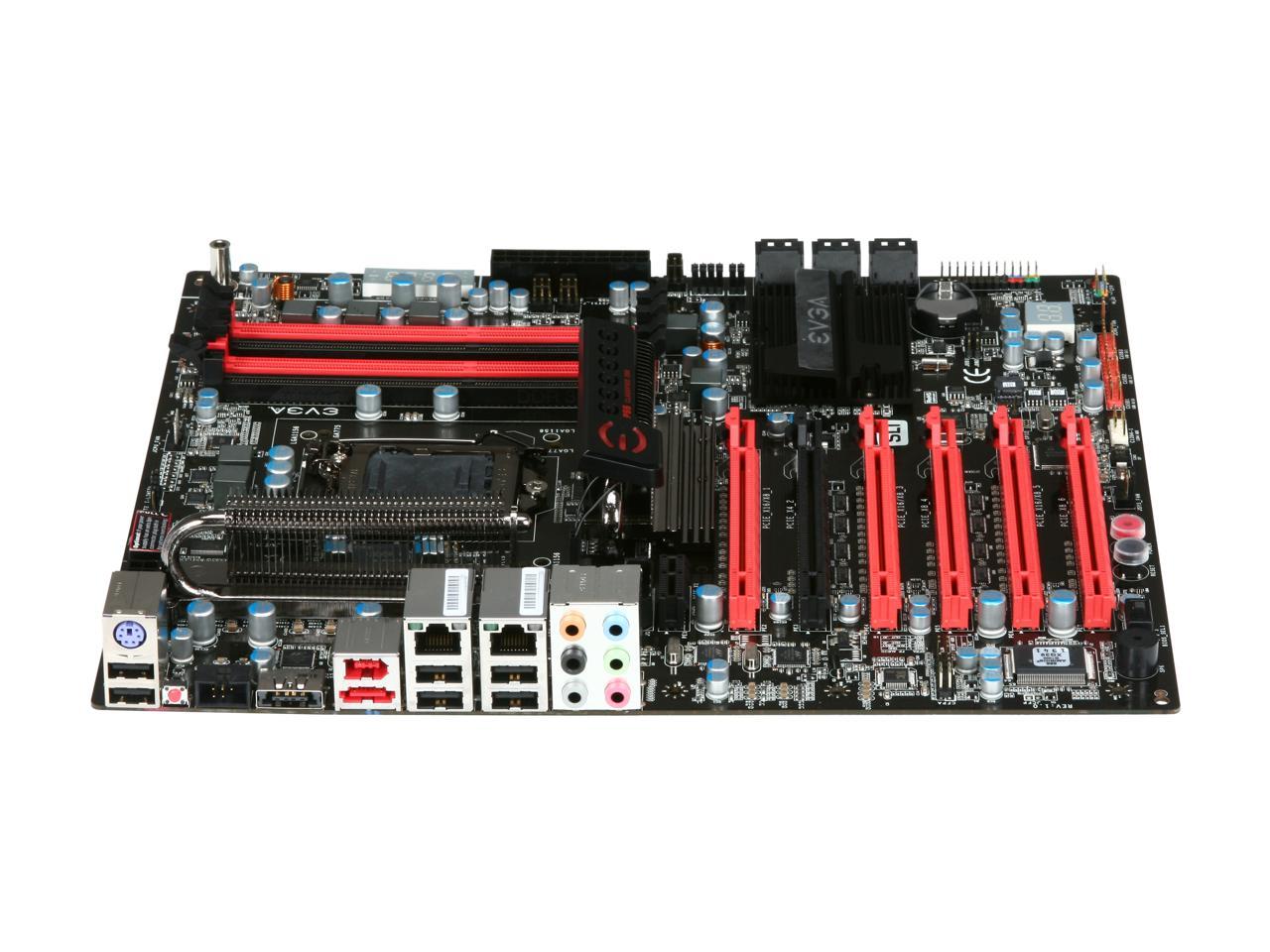 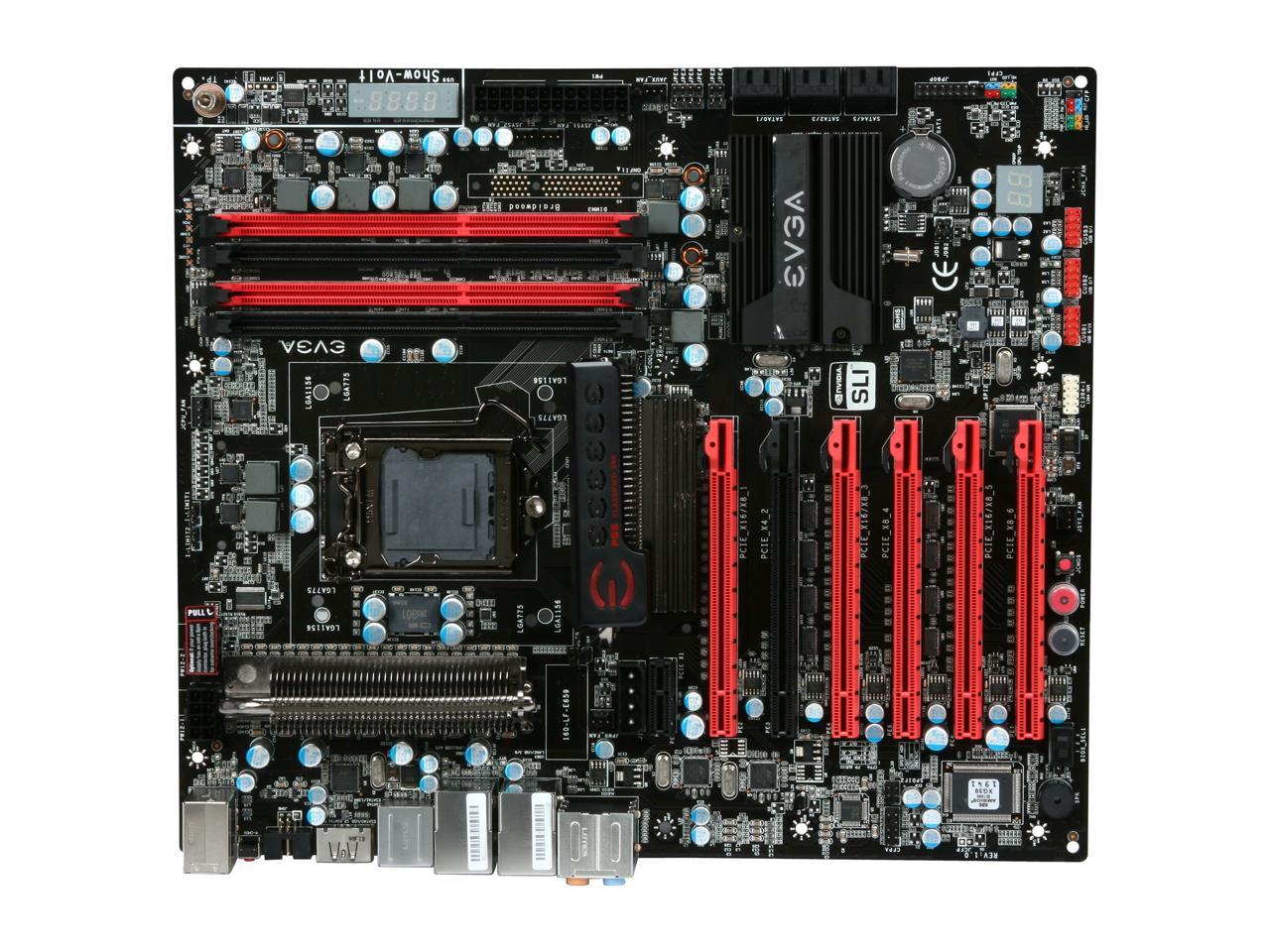 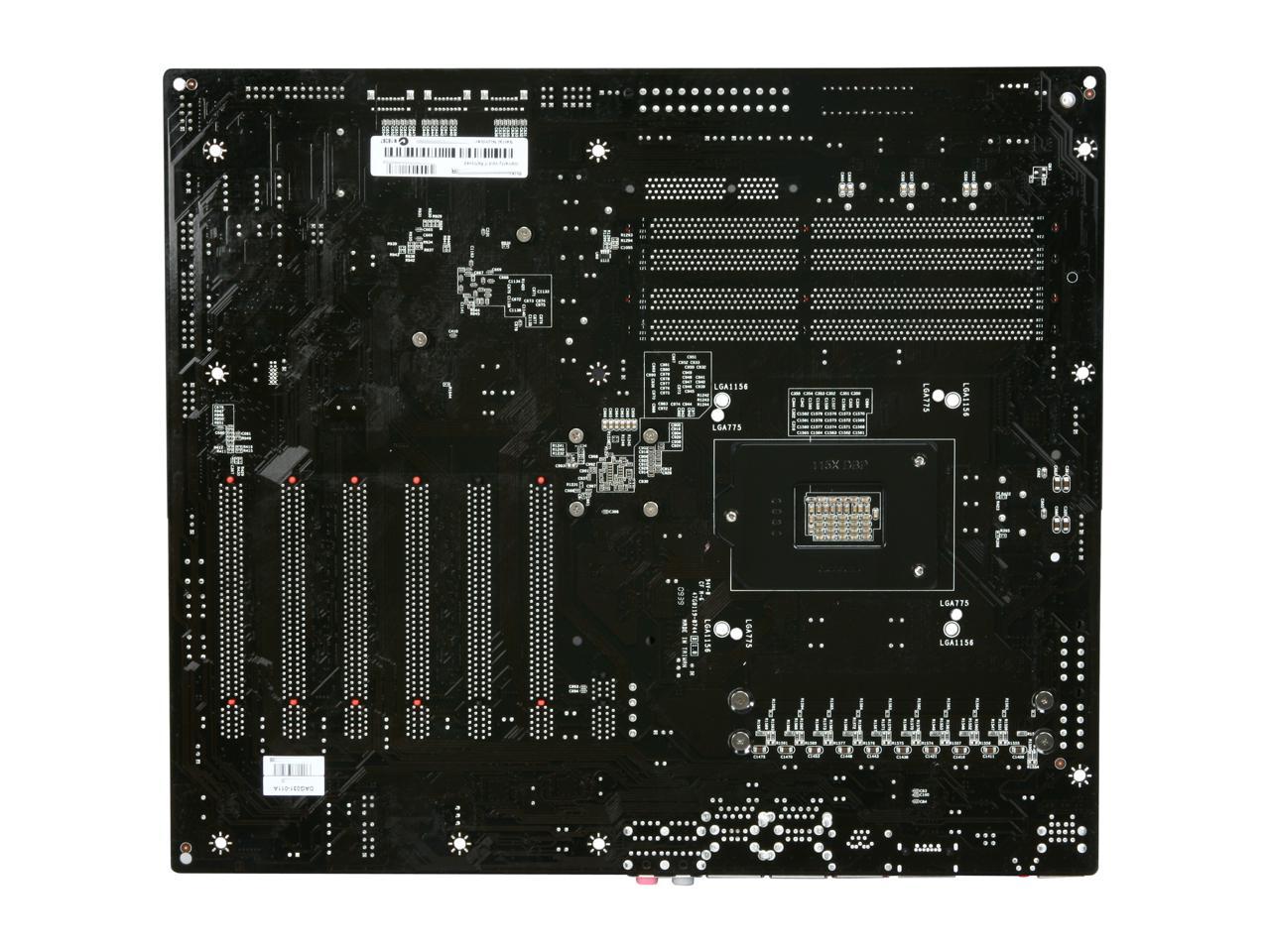 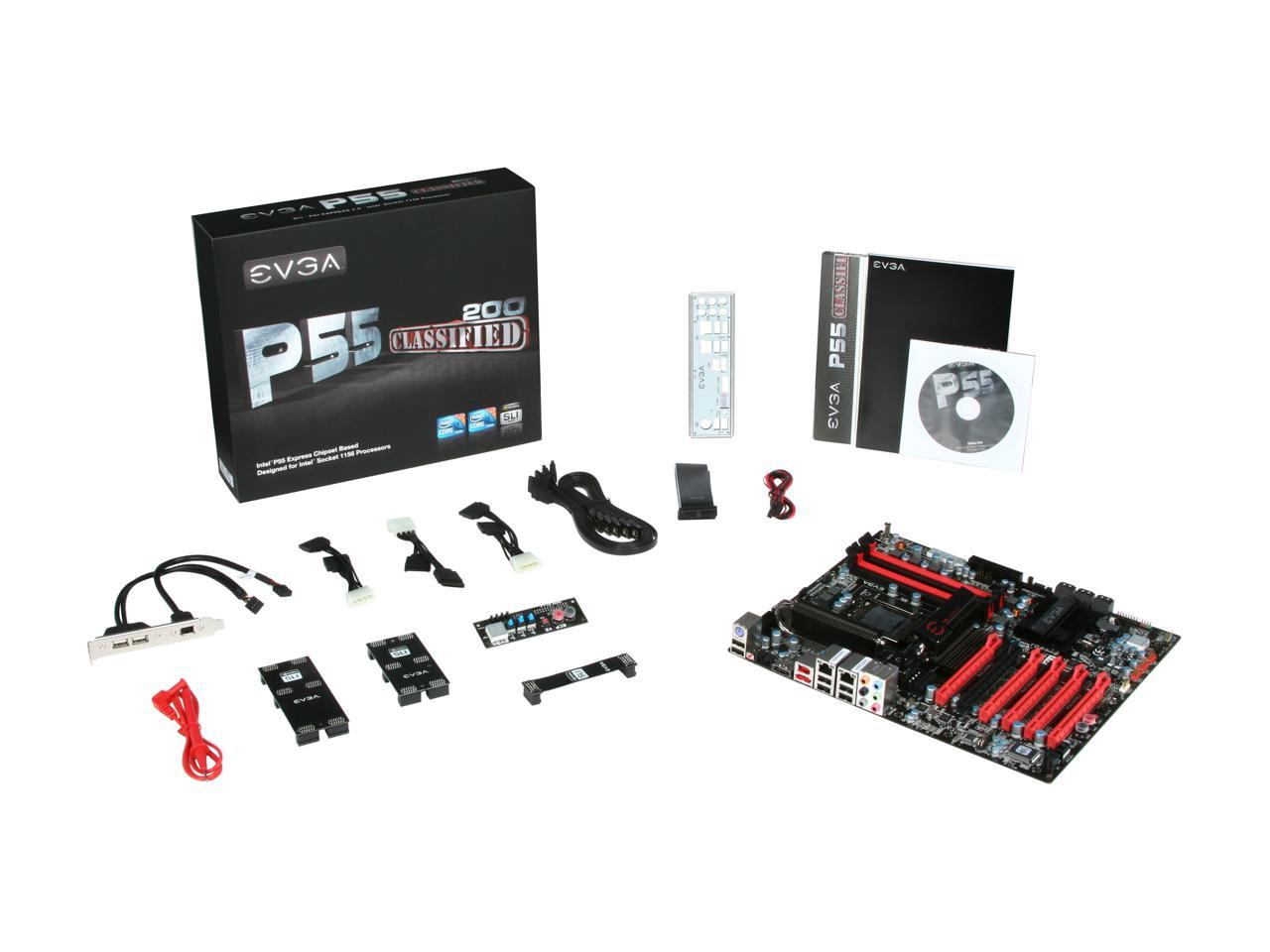 Pros: Amazing board, does everything you want it to do. It makes it super easy to OC. EVGA support is amazing as well. Booted up on the first try which is rare because usually there is some stupid problem.

Cons: My heatsink is 1/4 MM away from hitting stuff.

Pros: Very nice board so far. No problems with the installation or configuration. It powered up on the first go and posted without any issues.

Overall Review: None. This board maybe a bit slower than the X58 variety, but I think it's more stable. For some reason the X58-based motherboards and the i7 9xx series processors seem to have problems. This is why I went with this series. I seriously looked at the Classic 4-way, X58 board, but saw so many bad reviews, I backed away. EVGA isn't the only one with these problems, by the way, this was also the issue with ASUS and Gigabyte, both of these companies offer excellent hardware as well.

Cons: For a $300 board you would think you would get some digital audio. There are no optical or coax digital sound on this board. For this reason I gave it minus one egg.

Overall Review: I have yet to tap into this boards power, I am sure it will be well worth the extra money I spent on it.

Pros: Lots of nice features. A gamers board for sure. Currently at dual SLI but this board is driving me to get my third EVGA 560Ti. The multiple bios is nice. Can play on one an leave your current settings alone (just in case things go bad). The sound is much better than I expected. Board installed and booted right up...tg. I have dealt with EVGA support and the response was quick and awesome.

Cons: Common.... One PCI slot for most sound cards..please. Oh well... You give and you take. Triple SLI price I pay. The provided USB card for a slot could have had slightly longer cables so I didnt have to wrap around the video card. I needed these USB slots. Optival fiber sound output would have been nice so my Tritons could have used the controller.

Overall Review: Dual channel memory boards seem to be getting harder to find.

Pros: This was for my first build, and I have to say the color chart that came with this board made connecting everything so easy! I didn't even need the manual with the huge poster sized chart.

Cons: Because of the heatsinks on this board, I could not install the V6 GT that I bought, so be aware, like others have said, some heatsinks will not fit.

Overall Review: More features and options than I will ever know what to do with, and noob-ready installation, worth the price in my opinion just for that alone.

Pros: This thing is just plain sexy! Runs my I7 860 @ 4040 (20*202) without a sweat. Plenty of onboard fan headers and SATA ports. The ShowVolt is pretty cool, but would be neater if it actually randomly showed your current voltages while running instead of having to use the included probe. The glowing E on the chipset cooler is pretty cool. Have not had any issues with the double reboot than some others experienced.

Cons: Does not have USB3 or SATA3 support. If Newegg would of had the new Asus ROG P55 when I purchased, I would have probably gone with it since it supports those features as well as built in bluetooth.

Cons: Not really a con but it was set to default to start up twice to check to make sure everything was peachy. A quick bios update fixes this or at the very least gives you the option of changing it. Also it didn't initially showed my 8 gigs of DDR3 until after the bios update also.

Overall Review: Good board for the money if you are buying an i7.

Pros: This board has the better, hence price, 1156 socket. The CPU pins have 300% more gold - meaning that they will have better power delivery - the primary reason for buying this MB. EVGA F-T-W boards use the cheaper sockets, so beware of this if you plan on over clocking. The switchable 3x BIOS is nice, but I rarely - if ever - use it. It's meant for over clockers - which I don't do. I prefer to run the voltages at their default state, this ensures your CPU temps stay nice and cool, thereby allowing for a longer life span of your rig. So far, its been nothing but stable using an i5 750. I put a Noctua LGA 1156 after market cooler on this and idle temps run around 27c-28c with an ambient room temp of about 24c. Load temps range from (Adobe CS5) 32c to around 45c (spikes) running a big game. But they usually average around 38c under heavy load.

Cons: As others have stated, the voltage display doesn't work - at least on mine it only shows the CPU core 2 temp. But then I haven't needed to use this, so I could have overlooked something in the BIOS that would properly display this? No matter, it's not a big deal. One thing that I discovered was if the quick boot is "ENABLED" expect the possibility to have SATA port errors. Once I disabled this, it takes a few more seconds for the BIOS to initiate, everything is seen and Windows 7 64bit runs smooth as silk.

Overall Review: Whatever you do with this board, just remember to disable the quick boot in the BIOS. After I upgraded the hard drive to a Corsair P128 CMFSSD-128GBG2D 2.5" 128GB SATA II MLC Internal Solid State Drive, this board really slides through Win 7 64bit with little effort. From the reviews I've read here on newegg about the memory slots failing, I have to think, how far have these individuals pushed the over clocking? While the i5 CPUs can be over clocked to the extreme, if you build your rig correctly, there really isn't any need to do so. One of the biggest performance improvements can be had by getting a quality SSD and enabling the TRIM feature in Win 7. Overall, I'm very pleased with this board. If you are using Win 7, I would suggest letting Windows Update install the sound drivers. I have re-installed the OS 3 times using different hardware configurations and each time I installed the EVGA sound drivers, it seemed to make the sound distorted.