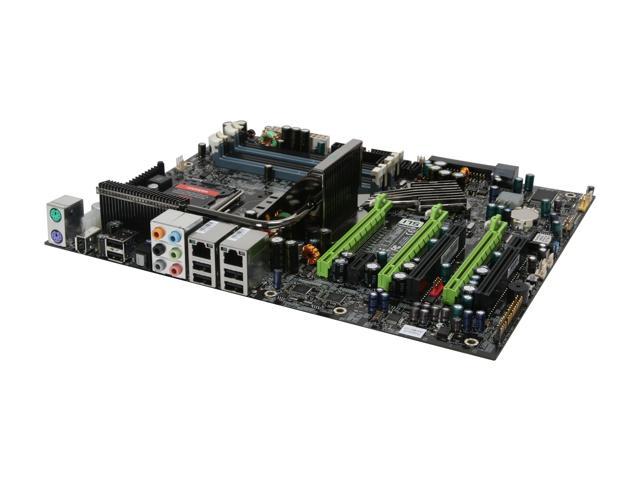 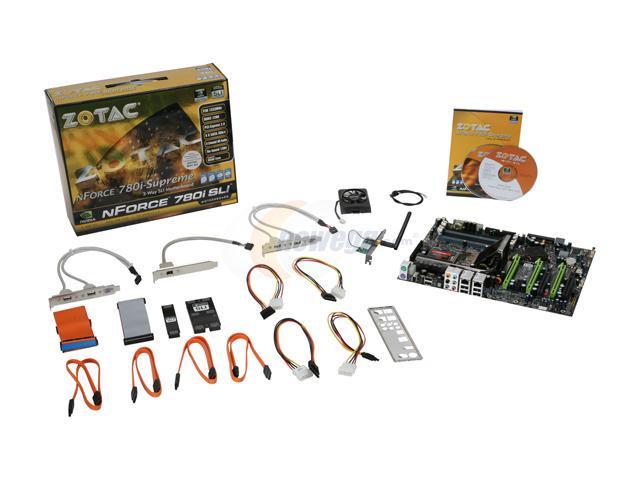 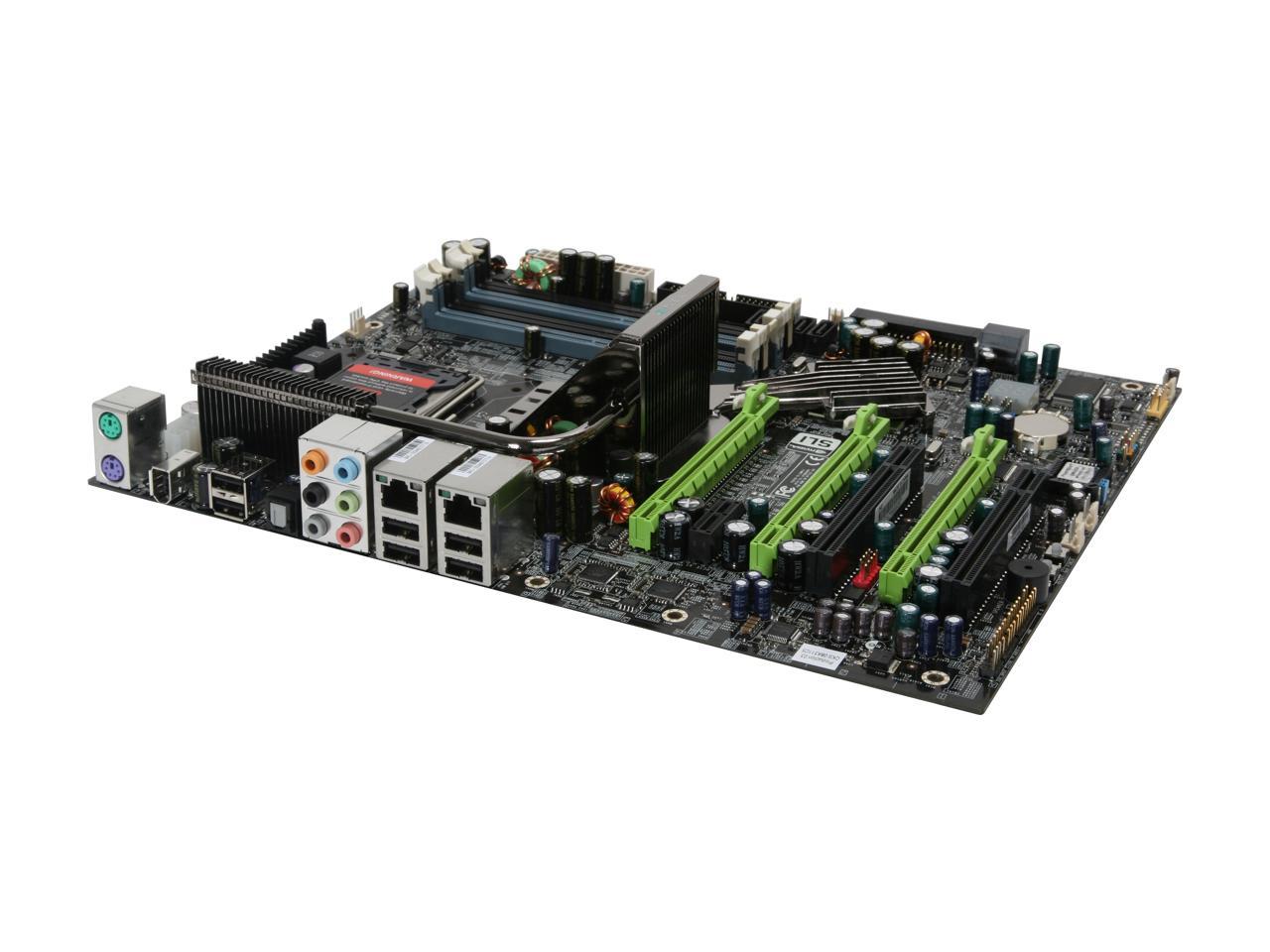 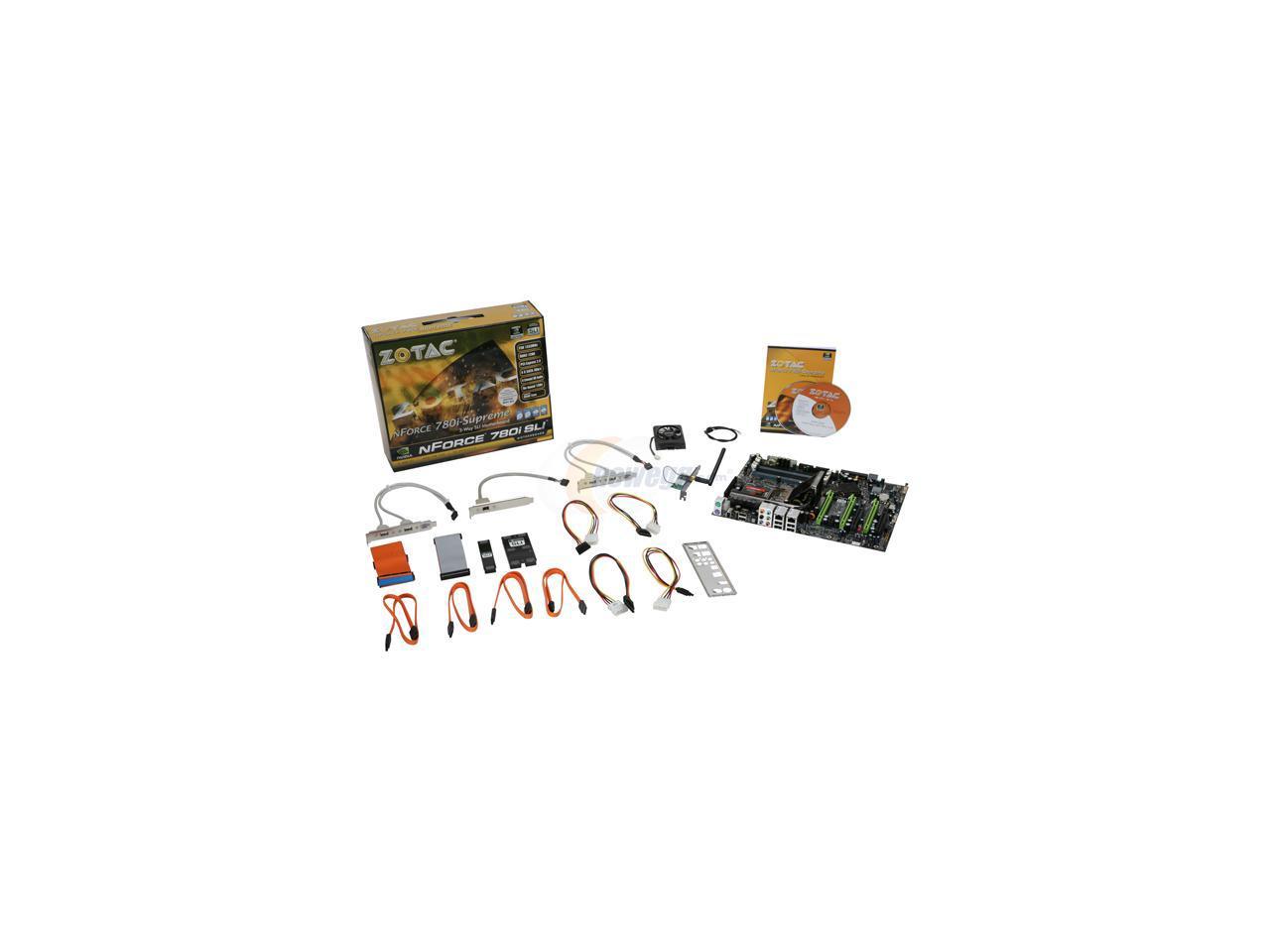 Learn more about the ZOTAC NF780I-A-E

Pros: It's been a great board so far. Been running it almost non-stop for a few days now and hasn't had a hiccup yet. I have a friend that has the XFX version of this board and apparently his has been perfect as well.

Cons: (not sure if this is standard on all boards) the IEEE connector seems to be in a strange spot. If I decide to upgrade to SLI, it's going to be useless. And seeing that the WiFi kit that comes with the board uses the IEEE connector, that may become useless too.

Overall Review: It hasn't killed itself yet so I guess its a good board.

Cons: Manual could be more helpful, still kinda confused how to install the wifi.

Pros: This is a very fast running board. Installed a Q9550 and it installed windows faster than my I7 build. I was impressed. Bios is very simple with few options. SLI capable as I am running 2 9800 GTX+ for boy's gaming rig.

Cons: Well once this was running it seems to be great, however this is where the cons come in. This was not an easy build, not because of the MB but because of ZOTAC support, or the lack there of. Played email tag for two days before I gave up on support and finally figured out the issue reading hours worth of articles from various online sources. The MB did not like my used WD 649 SATA HDD, inevitabley ended up running two in a RAID format in order to install Windows 7 or Vista. It took 24 hours to get an answer for each email (could have spent a week or more figuring this out going through support) as all support is located in Hong Kong. No US phone support. I asked specific setup questions and they asked me a question in return even after I told them my setup and what I was using, and that I just needed him to email me the recommended BIOS setup for the config. After recieving questions in return for my questions I realized "support" was going to take well over a week.

Pros: - Great price that you cannot beat - Fast shipping as always with newegg - Came with tons of wires, adapters, even came with 2 back panel usb ports you can install yourself and a 1394 back panel port as well. - came with it's own wi-fi card, which is very small so it doesn't take up any slots on the board, but it still performs like a full sized one -very nice looking heat sinks on northbridge, even came with a fan.

Cons: -doesn't recognize my G. Skill DDR2 1066 as such, only reads it as 800 mhz, but that could just be a miniscule compatibility issue, I'm buying 8gb's worth of the verified corsair ddr2 1066 next pay any way. Other than not reading them at full speed, the ram works perfect.

Overall Review: I'm glad I bought this, I'm buying a Q8200 soon and this'll be a nice additional upgrade.

Pros: 3 SLI ready PCIx16 slots = awesome, I combined this board with a Q8200 CPU for screaming machine I could not ask for more for the amount of money I paid.. This was probably the easiest install I have done. The board came with all the cables, sata/IDE, mounting screws, etc. Zotac even threw in a internal USB wireless card with an expansion card antenna. 4 memory slots definitely upgradable ram wise, it boasts multiple USB/1394/audio jacks. The on board audio sounds great, this board really provides you with multiple ways to get your peripherals hooked up. Bios is decent, can overclock/manipulate bus speeds right out of the box.

Overall Review: I really can't think of a con to this board, it was probably the easiest board to install, came with everything you needed to get started. I would recommend this for anyone looking for a new board to use.

Pros: I purchased this board in 2008 and it was once a great board. It went strong for about 2yrs and I never had any problems. With my set-up, I have been able to play basically every MMO and FPS I have come across.

Cons: I understand 2 yrs for some people with the same rig is a long time, but I'm just letting everyone know this....After 2 yrs my computer has continued to randomly freeze up or not even sense that certain hard drives are even connected. I know my hard drives were not infected with anything because I had wiped and reinstall everything and then while booting up, in the bios, it would show there was no hard drive. I am now on my 3rd drive because this continues. Also, when the computer is actually working, everything will start to, randomly, freeze up. 1st the screen and then the mouse and then the only way to turn off the computer to restart it is by manually pushing the power button. After about a year or so, on the bios screen when I turn on the computer, after it reads what hard drives I have connected it also does not continue to the next screen automatically. It will stop and say No Floppy Disk Detected (error 40). I have reinstalled the bios and nothing works to fix this.

Overall Review: For a while this board was great, but now it constantly freezes up at random times and it's cr*p. I'm currently working on putting together a whole new rig. The way my computer is constantly freezing up now and I have had to install new hard drives....the only reason I gave this board 1 egg is because I had to give it something. I wasn't even going to give it that.

Pros: This motherboard is a very fine product overall. Great Overclocking, easy set up and best of all it came in working order. Has onboard power and reset buttons for out of case testing. clear cmos jumpers were nice for my overclocking experience. (dont have to hassle with the battery) Came with a wifi kit other brands dont have. Lots of extra cables. precise voltage control and easy FSB/Memory frequency adjusting. THIS BOARD IS REALLy REALLY GOOD FOR OVERCLOCKING

Cons: When i received this motherboard i installed all of my componets and pressed the handy on-board power button. The board would refuse to Post on the first boot unless i used a 500W i had lying around instead of my Ultra 700W. Weird. it was fine after the initial boot up though. Also i was sad to see very few solid state capacitors. i know evga puts them on their boards...

Overall Review: internal IEEE 1394 in weird place on board. if you use the wifi it takes that plug. Northbridge fan sorta weak. temps were about 55 with a 3.2GHz overclock on my Q6600. Keep in mind that if you intend to take something like a Q9550 to 4GHz with a lot of RAM/VRAM your NB/SB will get extremely hot. (i.e. 65-70C)

Pros: -booted OS first try with test HD (xp) -solid board hardly any flex when installing ram/cpu cooler -everything's in a good place (same basic places as 680i) -Zotac has a decent good warranty -good overclocking ops. in bios (volts/fsb ect.) -10.00 mail in rebate -3 way SLI -uses cheap as dirt DDR2 ram (8gb less then 100$) BUY IT! YOU WILL NOT KICK YOURSELF LATER FOR DOING SO!

Cons: -has a fdd slot (not really a con but i think the fdd socket on new motherboards is pointless and not needed anymore)