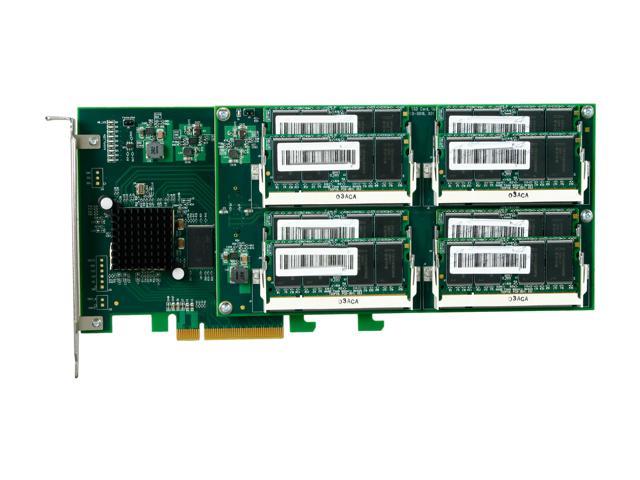 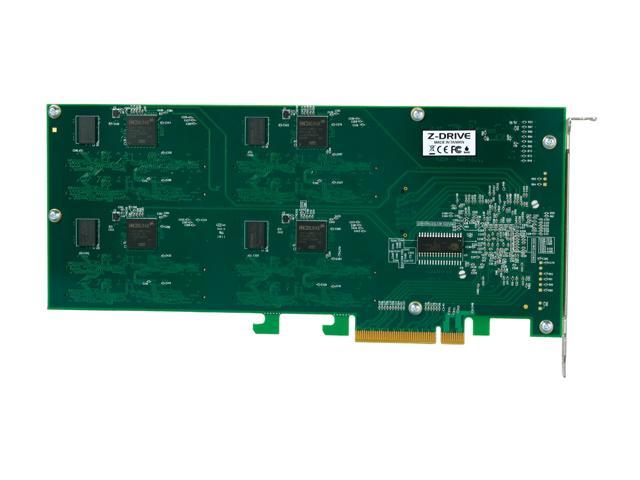 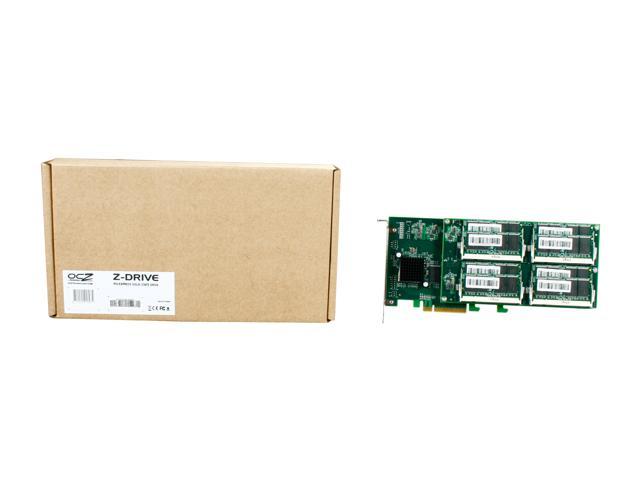 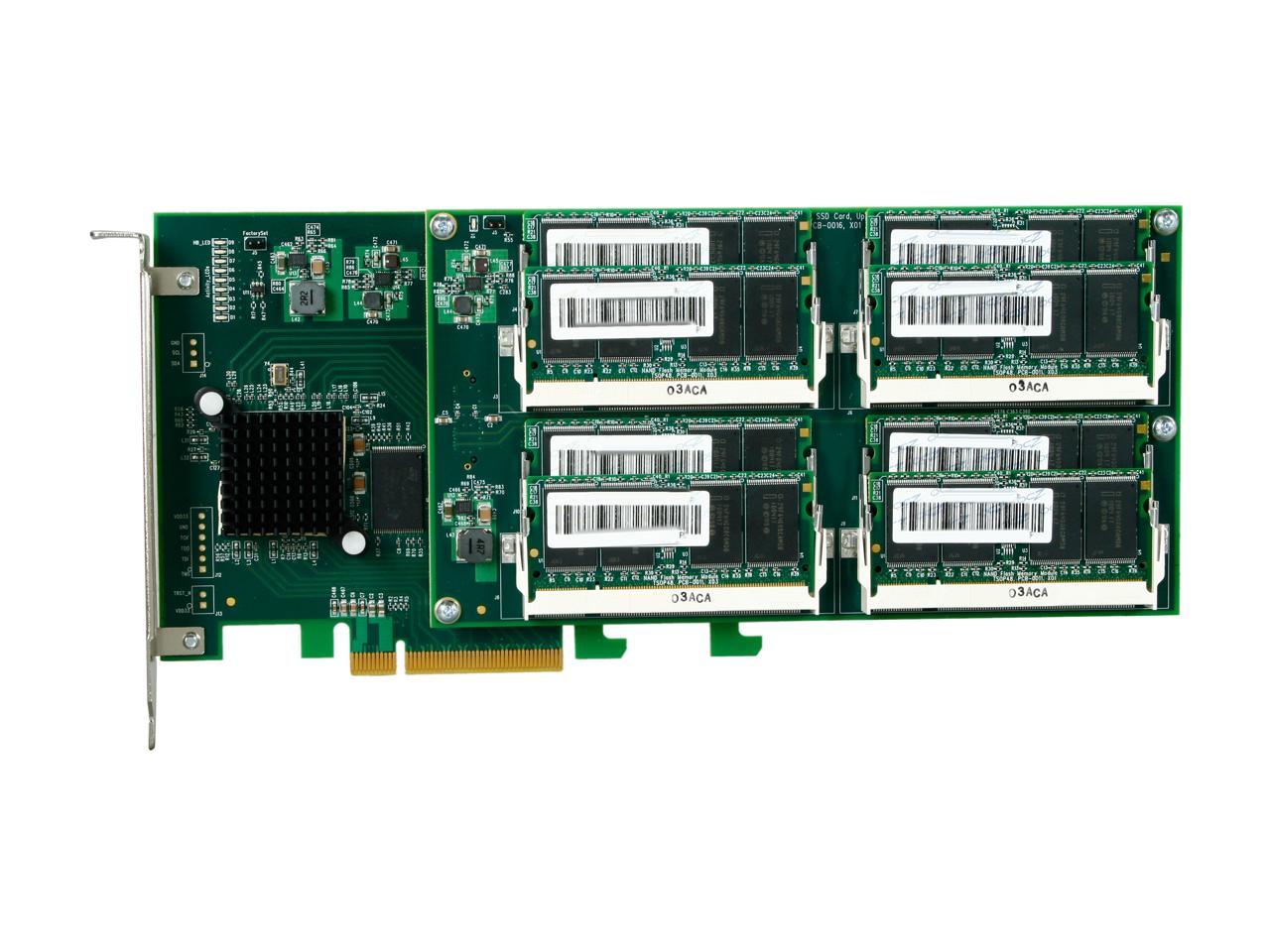 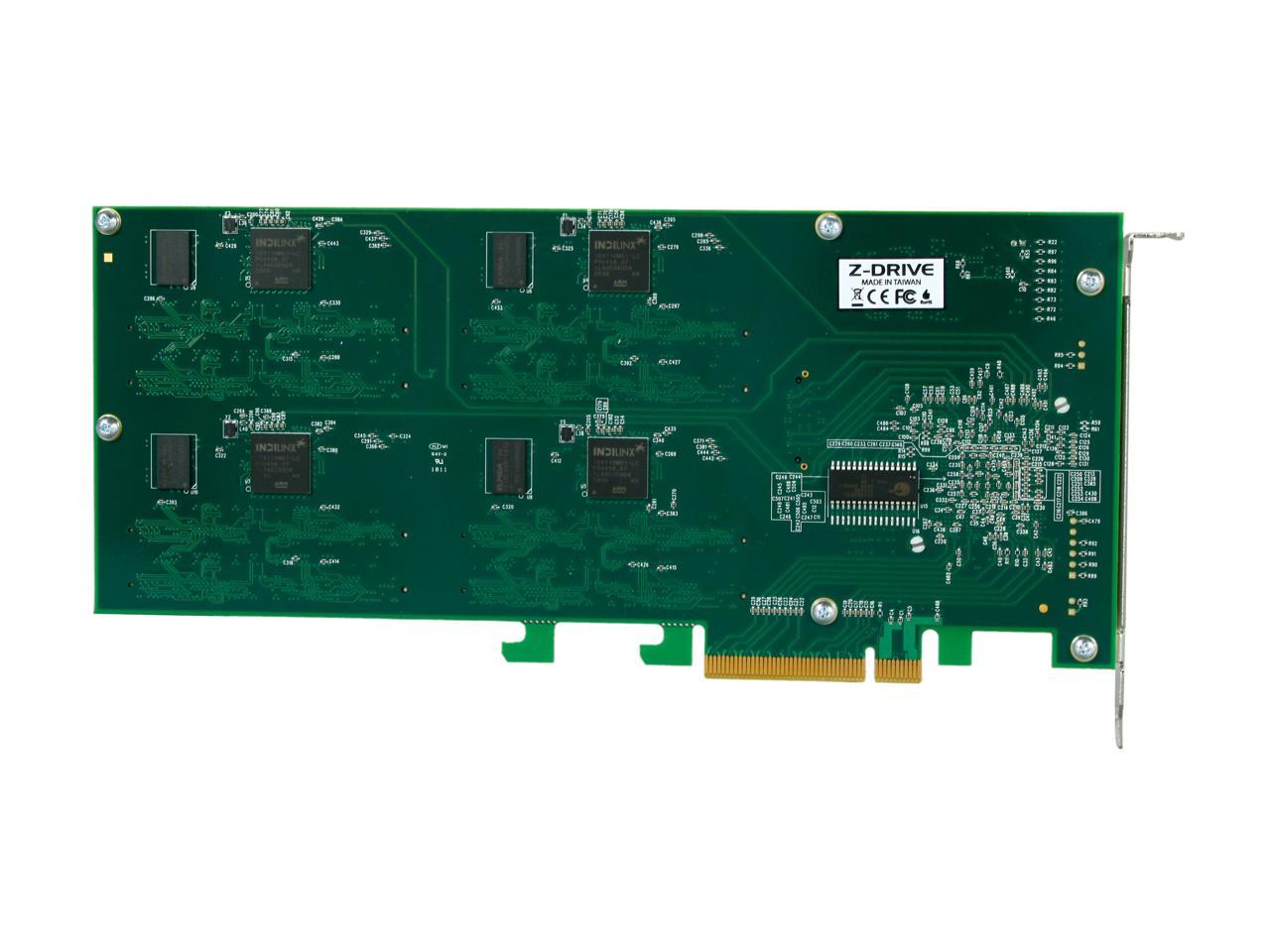 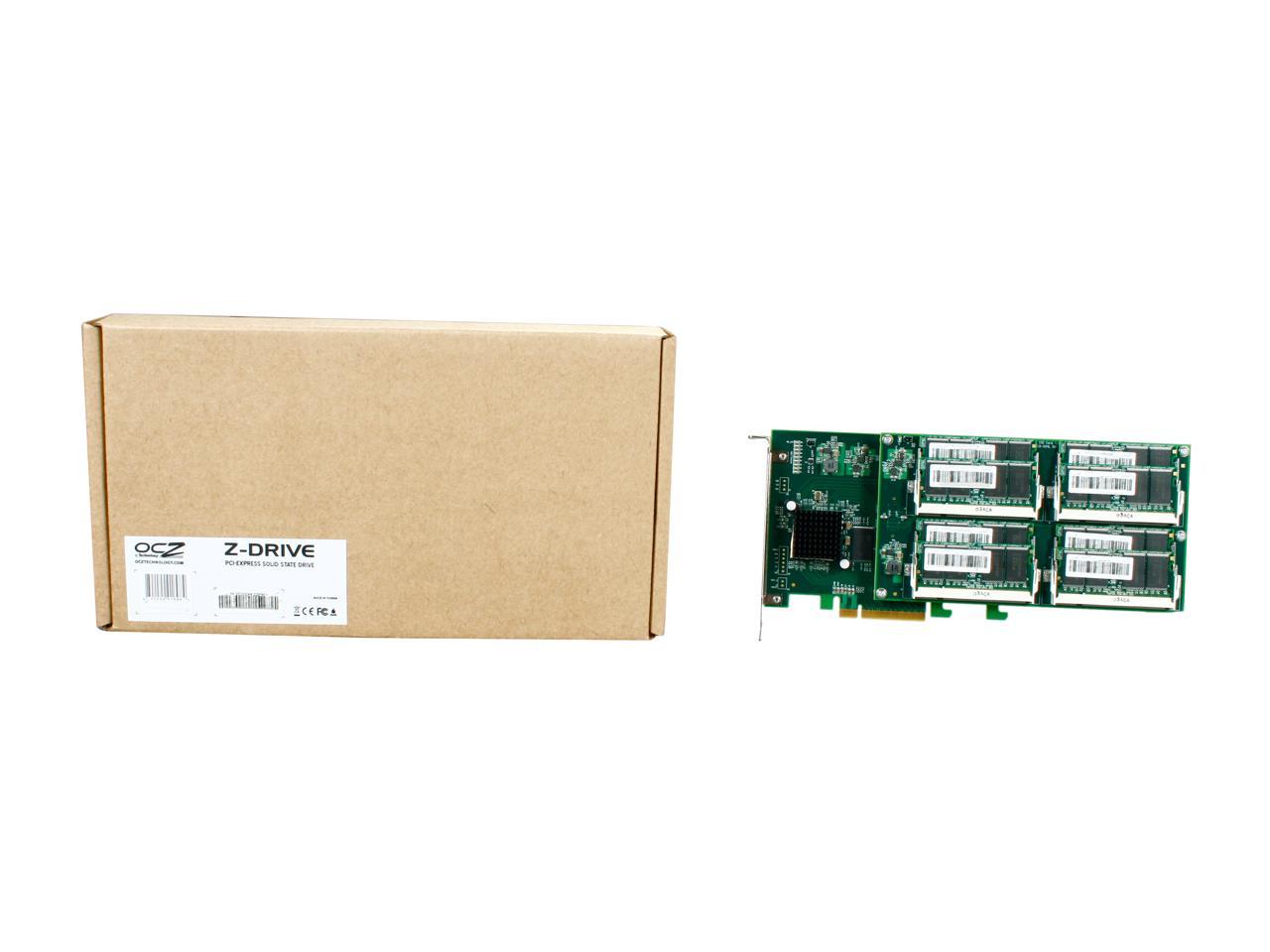 Pros: Installed easily. Discovered by Windows 7 without problems. The Windows Experience Rating was the highest possible. Boot time (once past the BIOS initialization) is about 10 seconds. Apps load more or less instantly.

Cons: The card is just wide enough that it prevents the neighboring slots from being used. The chips need a good airflow, else they get hot during use. As with all SSDs, speed decreases with use. Refer to OCZ's forum for problems some people have reported. Because this drive uses its own controller, TRIM support is not available. The built-in garbage collection may or may not make up for the lack of TRIM; the technology is too new for any long-term reliability statistics to be available.

Overall Review: I split the drive into two partitions: a small one for the operating system, and a larger one for applications (not including application data). The larger partition is mostly read-only to help decrease SSD wear. I keep app data on an old-fashioned spinning drive. I do worry about having a single point of failure if the SSD dies. I normally would make this kind of system with RAID6 or RAID10.

Pros: Extremely Fast, great as a media scratch disk if you're dealing with 4K or 5K digital cinema intermediates. Can't be beat for this for the price, unless you want to spend $250K for a Violin.

Overall Review: This is a very fast drive, best used for scratch or temp storage. Our experience with this model is that the NAND flash module in Slot 7 fails frequently, followed by Slot 4 if you give it that much time. The 2TB version seems to be much more reliable for some reason, probably because OCZ switched NAND flash suppliers mid-stream (same SKU, no doubt, no way to tell an apple from a lemon). It's still very useful for very specific applications, just don't expect MTBF past a Mayfly's lifespan. 1,000,000 hours? We have several 1TB P88, none have made it past 2,000. Our units travel, but this shouldn't be an issue for SSD's should it? We have a few RMAs to file this quarter, let's put it that way... OCZ, expect our ops dept nastygram in 3... 2... 1...

Cons: Made the purchase approx 1yr back. 1st unit was DOA (1 of the 8 'drives' on board did not work). RMA'd and replacement 2nd unit worked for a few months then died. Replaced and 3rd unit worked for 5 more months then died. RMA'd again and 4th unit received DOA. That is just pathetic! This is supposed to be an Enterprise class piece of hardware not a few hundred buck piece of consumer junk. My recommendation is to buy anything else other than this piece of OCZ junk unless you are willing to spend thousands on a 'play thing' that will last a few months at best.

Overall Review: To rub salt into our wounds our IT dept asked for an alternative model as the OCZSSDPX-ZD2P881T has so many issues. OCZ stated they could only offer a Colossus as an alternative!!!!! - A consumer grade single SATA II based SSD. ...Pathetic customer service to go with the pathetic product quality.

Pros: Speed is OK, noticeably faster than spinning disk, but we're still unsure it was worth the premium price.

Cons: We have 2 of these SSD's. One has worked fine since day 1. The other had to be RMA'd (half of the memory didn't show up). It took over a week to receive a replacement SSD from the manufacturer. The replacement SSD now mysteriously loses memory randomly. So, another RMA and probably another week's wait.

Overall Review: I wouldn't recommend this product yet, still some kinks to work out.

Cons: 1st Card was DOE (only 7 of the 8 internal 'drves' appeared to the raid controller) so minus an egg for that. Where is the instruction manual! - Both the 1st DOE unit and the 2nd replacement unit only included 1 sheet of 4x4" paper that tells you how to format the drive in windows but has no mention of how to configure the embeded LSI RAID controller or where to find the actual manual online. - Come on OCZ for the $ of this drive i would at leat expect a manual or a link to a manual!!!

Pros: This is an enterprise-class SSD, not a consumer product. It is expensive, that comes with the territory. SUPER fast. It lives up to it's advertised performance and then some. I run several of these in Oracle DB servers using ASM for striping & mirroring. They stinkin' fly way faster than any SAN I've ever used or seen. I didn't buy them from NewEgg.

Cons: Price is the only downside at this point.

Overall Review: SSD is the way of the future for server & enterprise-class storage. Within 5 years, spindle storage will be going the way of the Dodo bird.

Pros: I build myself a new rig every three years, aim for state-of-the-art, so I sprung for the OCZ 500GB p88 R2 Z-Drive. I had to acquire it elsewhere because Newegg offered only the 1 TB version (other components for my new rig have come from Newegg). The theory behind the Z-drive is that the 4-way RAID0 array through the PCIe interface should be significantly faster than SSDs on the much slower SATA interface. Although the effectiveness of the Z-drive's garbage collection vs. TRIM is not yet clear, the Z-drive is not expected to have all the problems that have been reported with TRIM for SATA SSDs in RAID0. Note that the Z-drive does add another 15-20 seconds to PC boot time. I've done some preliminary testing to compare the OCZ R2 p88 Z-drive with the Intel X-25M SSD. Several HD Tune Pro runs back up OCZ's claims of maximum reads and writes exceeding an astounding 1 GB/s. In other tests, hundreds of 10MB+ Adobe PDF and Photoshop files just leap off the Z-drive, seemingly instantaneously.

Cons: OCZ's impressive claims of "up to 1.3 GB/s read and 1.0 GB/s write" seem to apply only to very large files. I am just not seeing the same levels of performance for smaller files, for example, the many hundreds of tiny DLLs that make up the Microsoft Windows 7 OS, Office 2010, and other common applications. With smaller files, say, less than 64K, the OCZ p88 z-drive performs no better, and in some cases, actually lags the performance of the much-less-expensive Intel SSD (and this is in comparison with a single X-25M, not a pair or quartet of them in RAID0). HD Tune's low-level benchmark shows the two to be similar in burst rate. More surprising, HD Tune's low-level benchmark shows the OCZ p88 Z-drive's average transfer rate to be lower than the Intel X-25M's. Maybe the overhead with the p88's onboard LSI MPT SAS controller keeps it from being as efficient with small files compared to simpler SATA SSDs.

Overall Review: Is the Z-drive worth the huge cash-ectomy? That depends on your workload. If you're Photoshopping hundreds of camera RAW files or editing video clips all day long, maybe it's worth it. Gaming is a mixed bag on file sizes, so more testing is needed. The claimed 550 MB/s sustained write might be significant, but, again, OCZ doesn't qualify its benchmark conditions. In comparing bang-for-buck vs. the other components in my new 2010 rig, e.g., Intel's i7 980X, ASUS's Rampage III motherboard, Koolance's ERM-2K3U v 1.1 external copper cooling system, Corsair's Dominator 2250MHz GTX2 memory, and Sapphire's Radeon Toxic 4GB HD5970 (if I get lucky and snag one), OCZ's allegedly state-of-the-art Z-drive would have to be at the bottom of the value list. Note that I consulted with OCZ TS for two weeks before this review. Conclusion: Minus one egg for not being performant with small files, and another off for being too expensive for the actual performance upkick over conventional SSDs.

Manufacturer Response:
Hello, we want to thank you for your purchase. File writing performance for any drive, SSD or conventional, will be faster with larger files. Both small and large files require "file allocation" to enable the system to locate the file for late ruse. With large files, the time to allocate the file is not as noticeable. With small files, the same allocation time is required, but will occur every time a new file is written to the drive. If you write one large file, and compare write times to 100 smaller files of the same total size, the small files will take longer. Read times are not burdened by this time delay and SSD performance will be amazingly fast in comparison to a standard drive. Thank you
Ryan D.
Ownership: 1 month to 1 year
Steer Clear3/29/2011 10:13:19 AM

Pros: It's blazing fast... up until it dies.

Cons: These drives are actually 4 256GB SSDs with an onboard RAID controller, configured to RAID0. We bought 5 of these at the company I work for. Within 1 month 3 of them have died already. For this kind of money you're better off buying your own hardware RAID controller and 4 more reliable SSDs.

Manufacturer Response:
Hello, please call our support manager at (408) 733-8400, ext 206. We want every customer to be happy with their purchase, and will be happy to assist you. Thank you