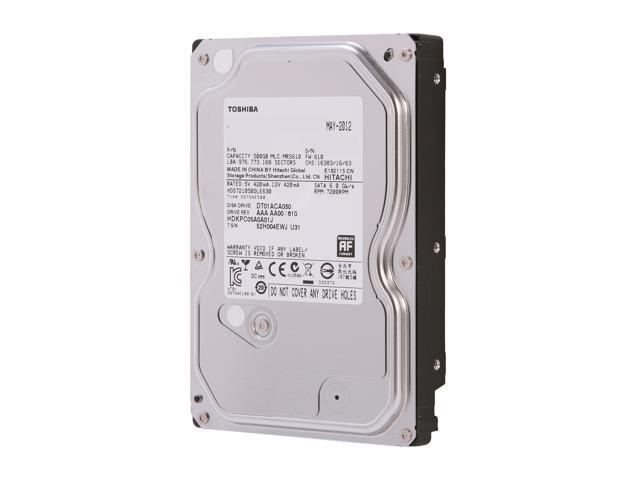 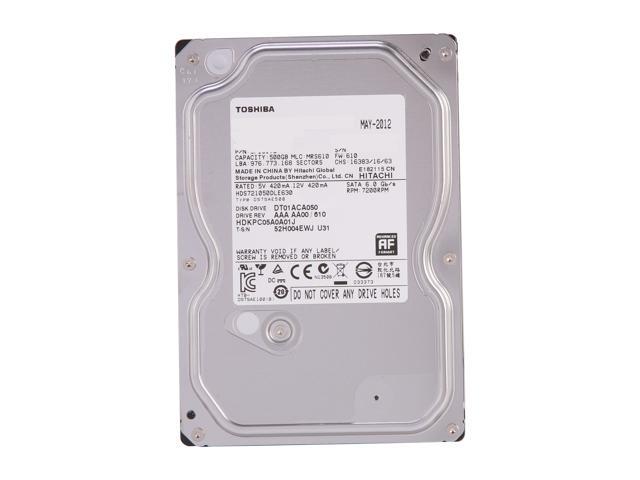 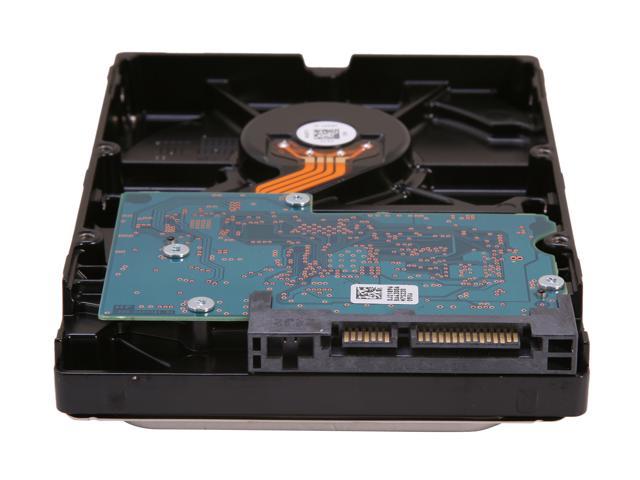 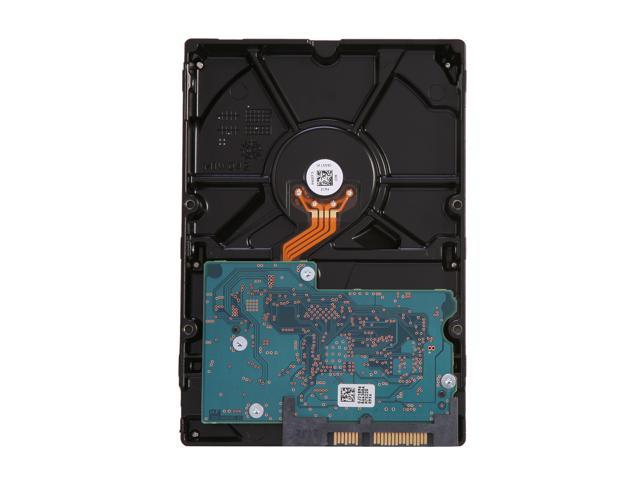 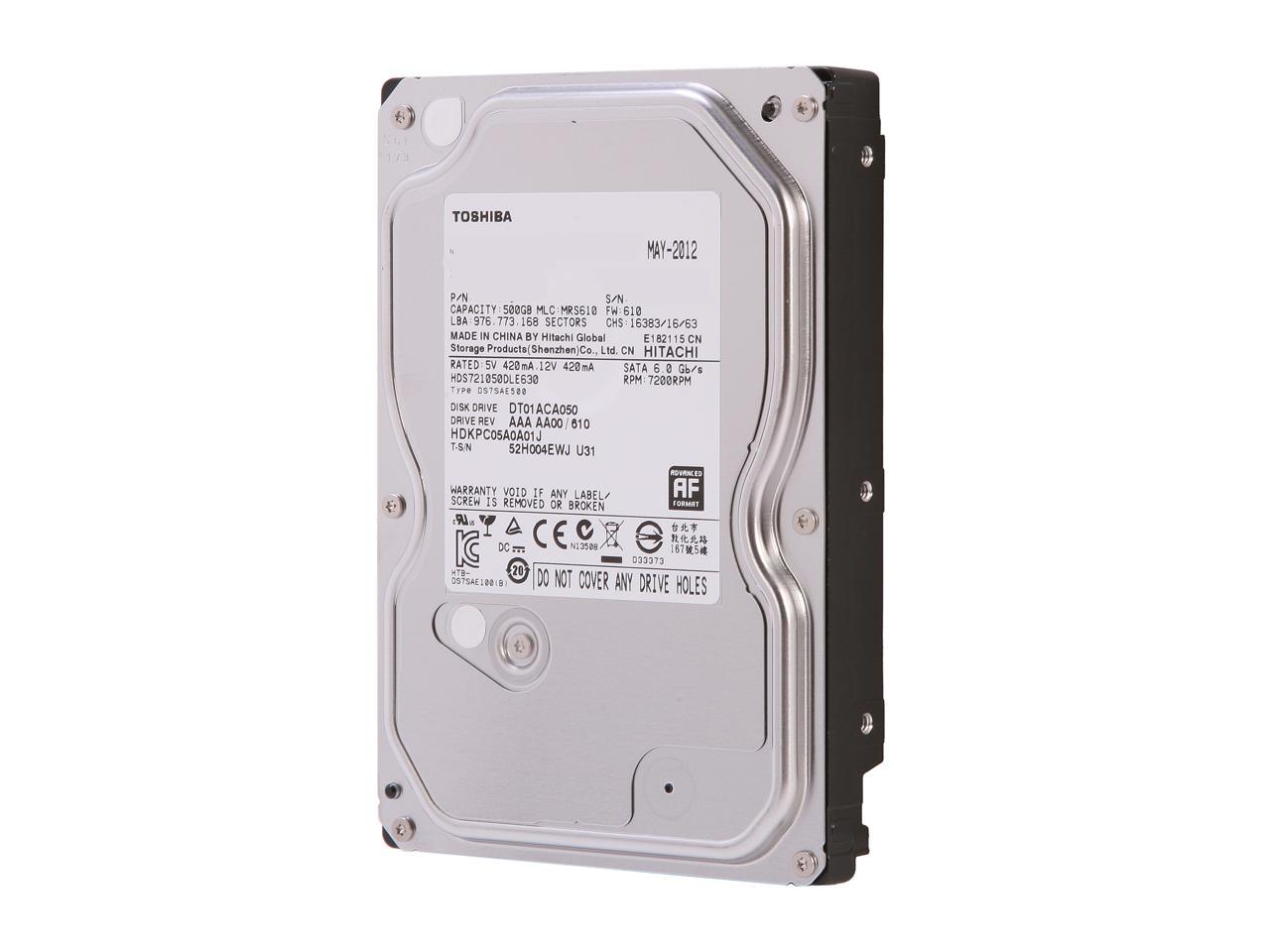 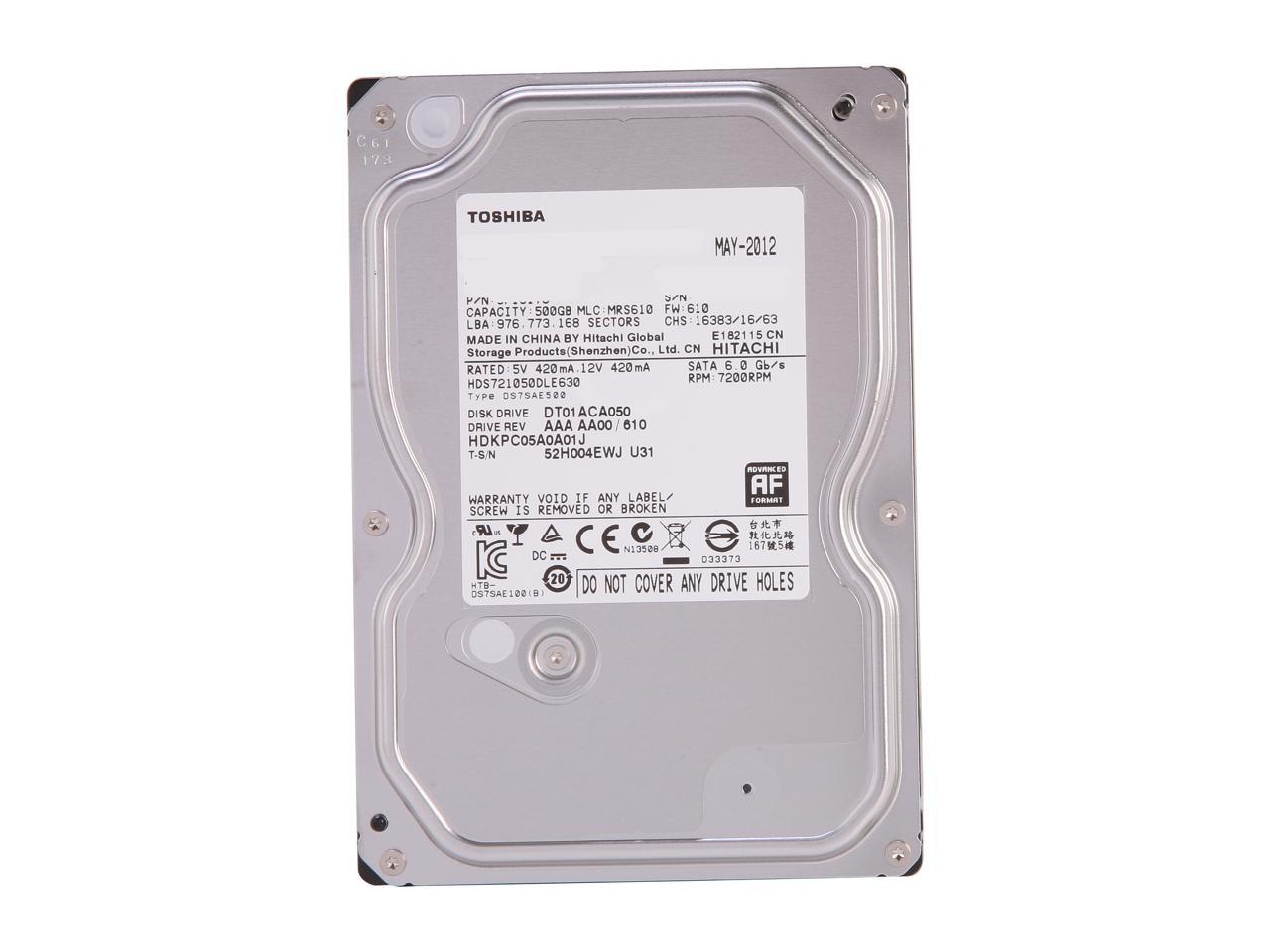 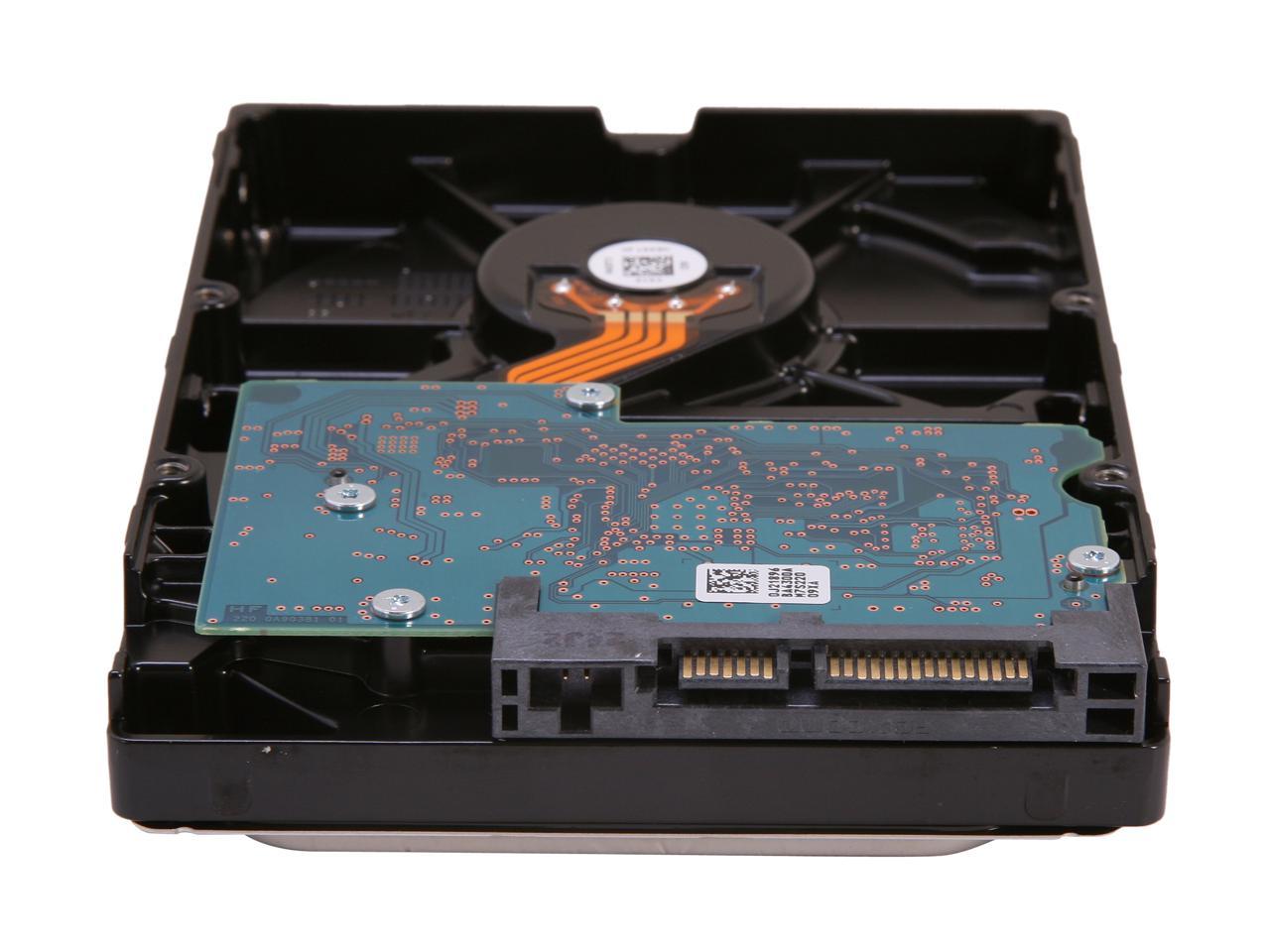 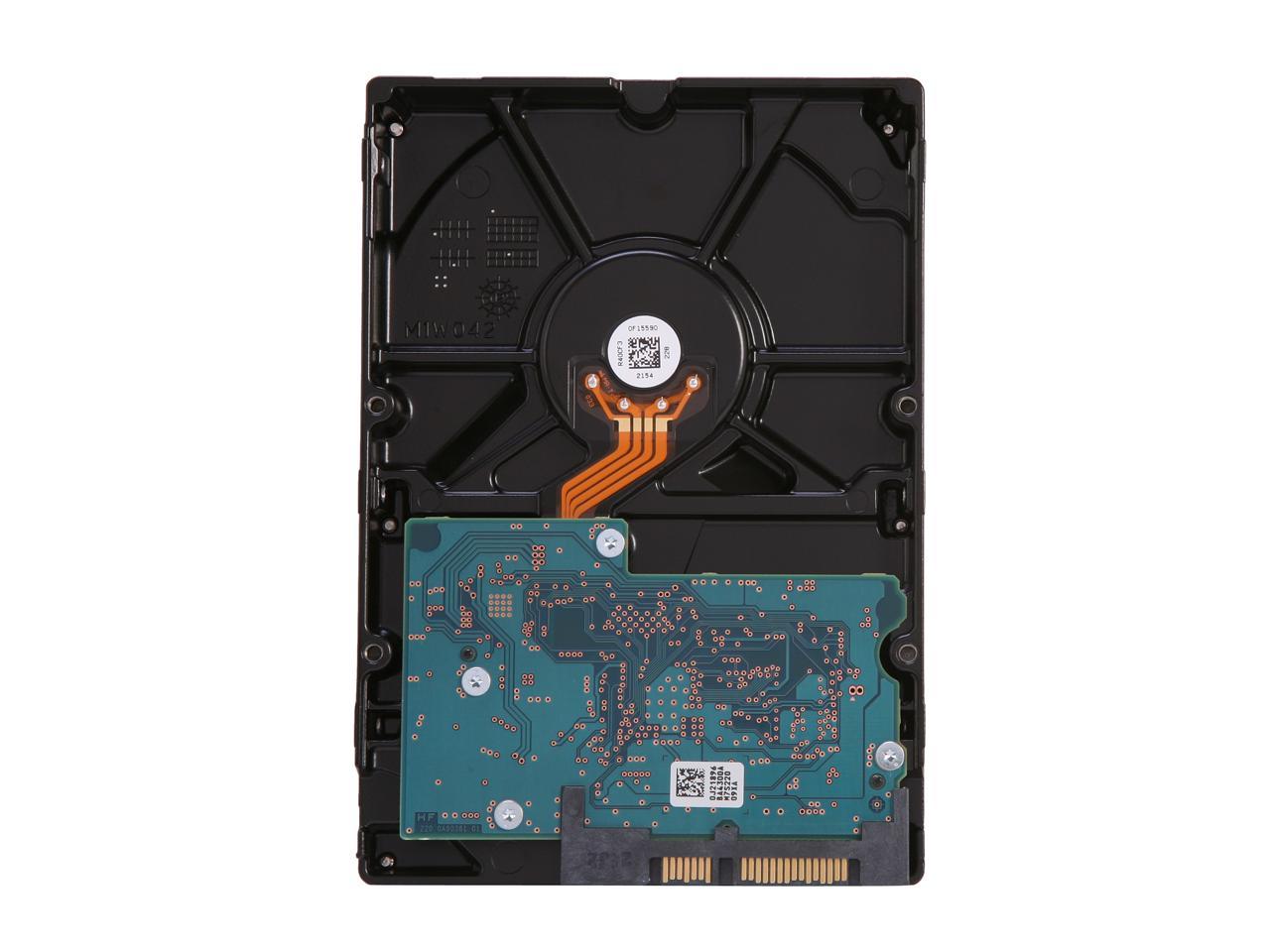 The DT01ACA series is Toshiba's first 3.5-inch hard drive for use in power-friendly consumer and commercial desktop computers. The 7,200 RPM drive series is engineered for high performance and low power for cooler operation.

Learn more about the Toshiba HDKPC05A0A02

Overall Review: I had this drive installed for over a month now for document storage and backup, and so far I haven't had any problems with it. Due to the mixed reviews here I've been watching it closely and I regularly check the drive for errors (with none reported). A month isn't very long but at least I can say I didn't have any issues right out of the gate.

Pros: It's HUGE. I love that it's huge and allows me to install all my Steam Games on one drive. Previously I had to split them between my 2TB Hitachi and my 1TB Hitachi. I had nothing but an excellent experience with those old drives and was very please to find out that this Toshiba is actually a Hitachi. It's FAST. Yup I definitely noticed a bit of a speed increase going to this drive from my 2TB Hitachi. Everything just loaded up SO much faster. It wasn't just a little faster, but MUCH faster. I compared it to my Western Digital Black Edition 1TB and from my use, I actually found this Toshiba Drive to be faster. It's quiet. Near silent in operation, which is great because the old Hitatchi 2TB had a noticeable sound when being accessed, while this Toshiba 3TB is barely audible.

Cons: None if you know what your doing.

Overall Review: I filled up my 2TB and about 50% of my 1TB with Steam Games and this allowed me to put all my games on one drive, which gave me some peace of mind. I loved that this is quiet, fast, and has tons of room for storage. Quick tip for fellow Steam gamers: If you plan on moving your games to this drive, find the steam folder and copy it over to this drive. I tend to put Steam on it's own Drive to make it easier for me to back up my stuff. After copying it over, find the Launcher for Steam and create a short-cut on the Desktop. Launch it and you'll be asked to for an authorization code that was sent to your email. Once that's done you're good to game...no need to re-download all those games again!

Pros: Bought two on sale, one for main data drive and the other for an automated daily backup of the first drive. They are fast, quiet and cool. Nice examples of modern hard drives.

Overall Review: These were shipped from Neweggs California location and I just have to comment on the amazingly good job of packaging. Each drive was wrapped in a large amount of bubble wrap that was securely taped. There was no extra space in the box. Best I've ever seen Newegg's shippers to. Keep up the good work guys and maybe you won't have so many DOA reviews of hard drives.

Pros: Initialize the drive to make it visible in Windows. Go to Disk Management in Admin Tools. Locate the new drive. it may show up as "Unallocated" or similar. If you left-click on it you should get a popup message telling you to intialize the disk before you can use it. If you don't do this then the drive won't show up as an available drive along with your other drive(s).

Cons: Way too many failures on these drives. i saw a video yesterday saying Newegg has finally decided to use secure packaging for bare hard drives. Hey it only took them 8 years to figure out that many hard drives were damaged due to sloppy packing & shipping!

Cons: bought in February 2015 and it just failed today June 2015. pretty short shelf life on something as important as a Hard drive.

Overall Review: Toshiba warranty and tech support is a joke, impossible to get someone to help troubleshoot/replace.

Cons: bought 10 together when on sale. 5 DOA out of box. 3 more dead (clicking noise) with less than 1 month usage. Can't return to newegg after 30 days. Toshiba RMA process is horrible. Hold on phone for hours. would never buy any Toshiba hard drive again.

Pros: Give plenty of errors and warnings before they die.

Cons: Die much faster than other drives.

Overall Review: I ordered 3x pairs of these exact model disks (6 total) in 2013 from 3 separate vendors. As of yesterday 5 of 6 drives are completely failed and the 6th is throwing errors and will be failed soon. None of the drives had yet crossed 30,000 hours, meaning they're failing MUCH faster than they should be, and uniformly as if designed to fail in a short window. With other magnetic drives running 60,000+ hours before throwing errors (in the same server), and the best drives clocking in 100k+, Toshiba's failure rate is exceedingly high, and why I cannot recommend their storage for any use. 1 star because it physically exists and they managed to put the sticker on squarely. Otherwise these are a waste of money.

Pros: Fast, High Capacity, & Cheap while on sale. Runs faster than my other HDD's. This is the second Toshiba drive I have bought and so far I am very happy but time will tell if the drive will last. Upon installation, I transferred ~175GB of videos from my other Toshiba to it and by the end of the transfer it was copying @ 143 MB/s on SATA2. HD Tune Results Temp: 39C while idle Min: 81.1 MB/s Max: 194.6 MB/s Access Time: 12.4 ms Burst Rate: 161.1 MB/s

Cons: It didn't install itself.

Overall Review: I was a big fan of Samsung drives back before Seagate bought their HDD division and completely changed the drives for the worse. I was in search of a brand to replace Samsung and so far Toshiba is doing a good job. Both drives I have are running great. The first drive was bought January 2013 and has had no issues as of yet. and detects in Windows and HD Tune as a Hitachi HDS723020BLE640. The new drive bought July 2013 shows up as a TOSHIBA DT01ACA200.