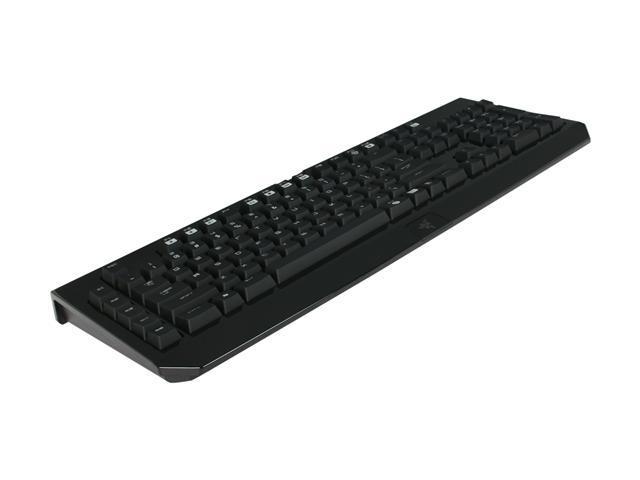 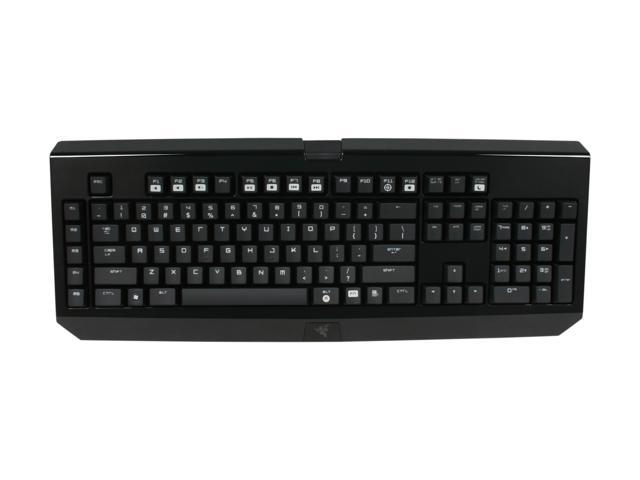 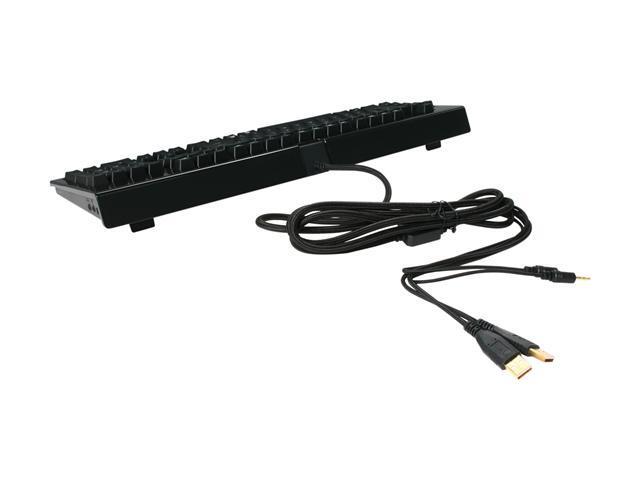 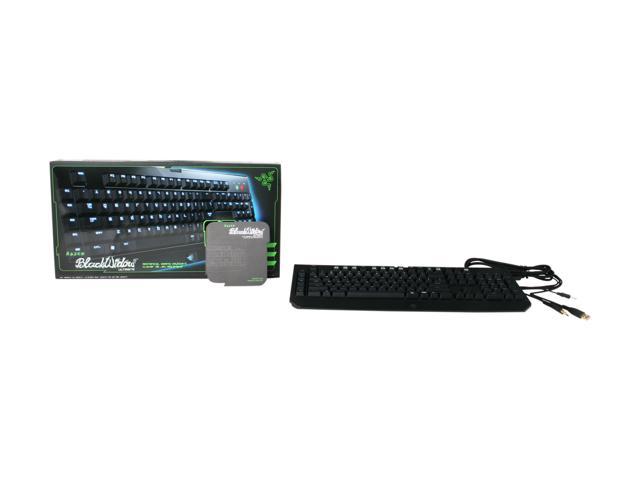 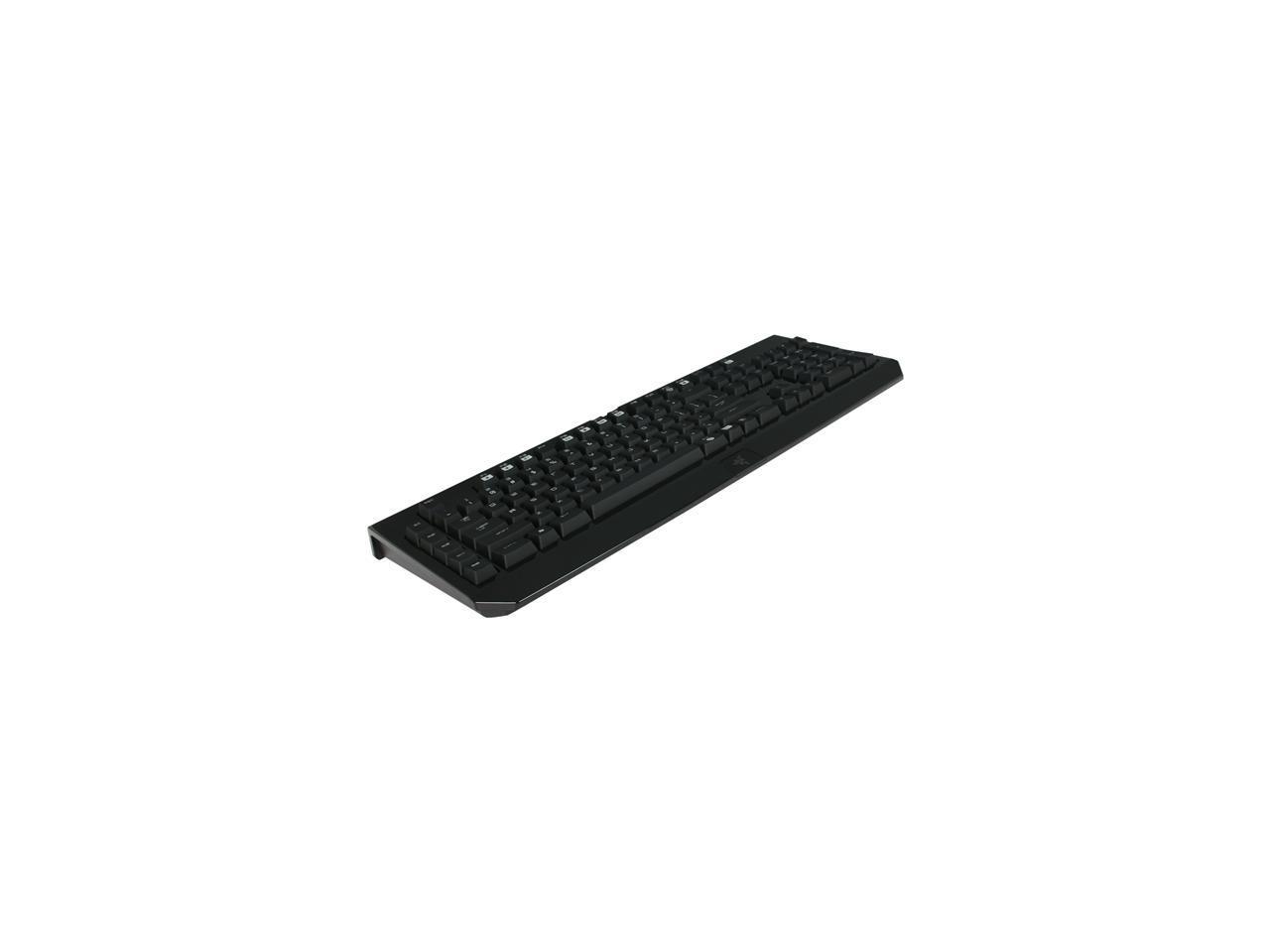 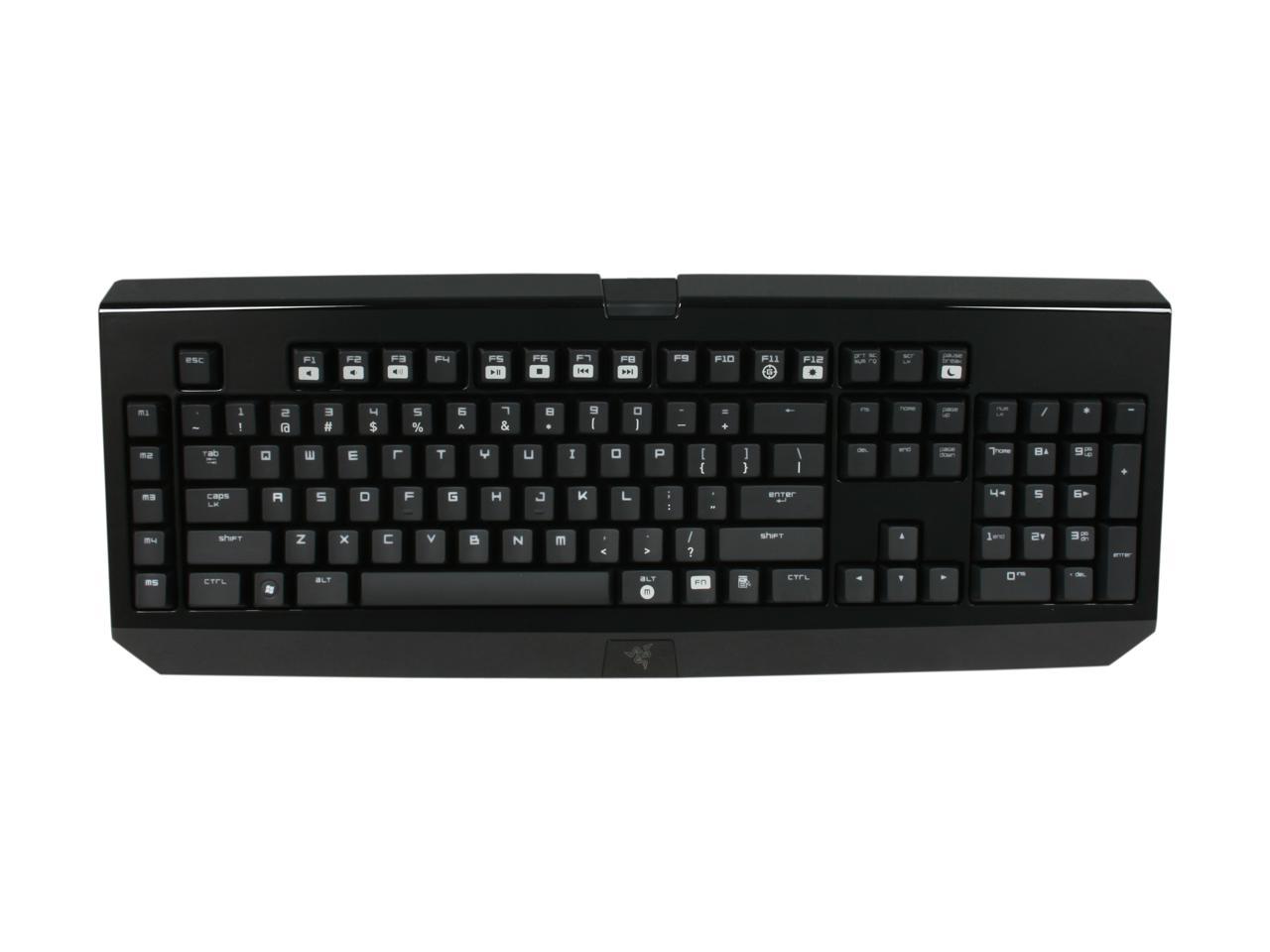 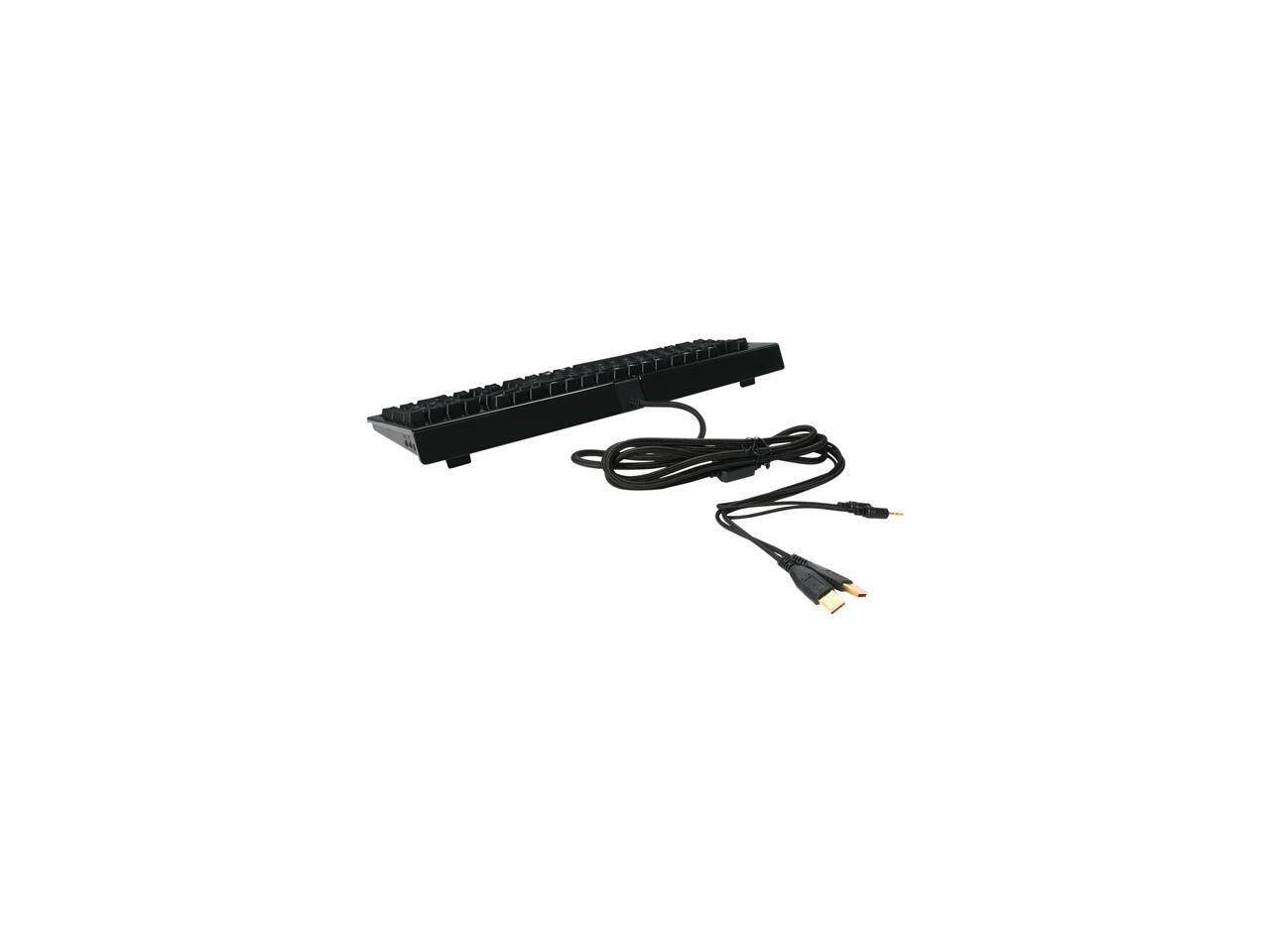 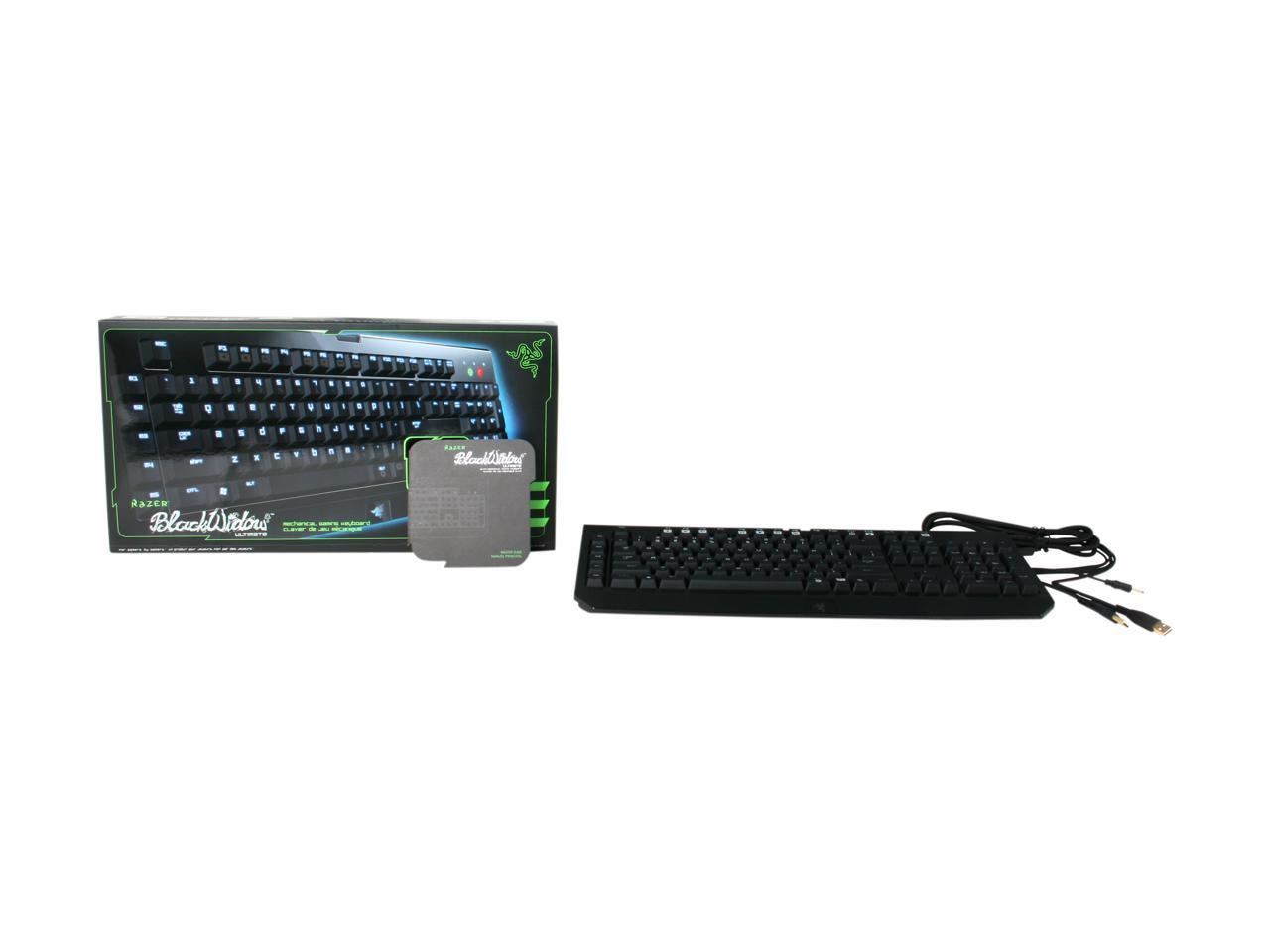 (373) Write a Review
OUT OF STOCK.
Overview
Specs
Reviews

The Razer BlackWidow Ultimate takes you full speed into combat with a full-fledged mechanical key infrastructure delivering crisp, tactile feedback with every actuation. Bringing an entirely different feel and faster keystroke actuation to the table, this revolutionary fully backlit gaming keyboard is rounded off by its additional macro keys and unlimited on-the-fly macro recording.

Overall Review: this keyboard is ridiculously loud. its like using a typewriter. you can hear it from 20 ft away, through walls.

Pros: Excellent response. I'm extremely hard on keyboards, apparently I use a little too much force when playing shooters. (Two Saitek Eclipse boards, a half dozen 'cheap' logitech boards, a couple Microsoft among others.) I'm extremely confident this board isn't going down without a fight. I've had it since December 2010, and it performs flawlessly. No sticking keys, no problem with the spacebar as other people have had the apparent misfortune of experiencing. All keys that are suppose to be backlit, are and have been since I first plugged it in. No interference as at least one reviewer complained of through headset when he enabled the backlighting...can't recall if his headset was plugged into the jacks on the board or his PC...if the former, then I could see that may be a possibility.

Cons: LOUD. Louder than non-mechanical keyboards. That should be a given. However, it's still a con, because it IS relatively loud. I'm not even sure if it's possible to change that fact about mechanical keyboards or not. If you want 'quiet', simply do not buy this board! The 5 macro keys apparently threw my typing off for about the first week of using the board. I normally don't find it necessary to look at the keyboard when typing, but found myself needing to do so as I was consistently placing my hands one key to the left of where I normally would. I wouldn't mention this as I initially thought it was just myself having this problem, but other reviewers in various forums have experienced the same thing. It's rather annoying, but shouldn't be an issue within a week (probably quite sooner if not an issue at all for many.)

Overall Review: I've only been using this board for ~ 6 months, however, my experience tells me this is the last keyboard I'll have to buy for at least a few years.

Pros: Tactile key response, high visibility keys, awesome glossy finish. Easy to set up, though keyboard software must be downloaded from Razer's website (no installation disk, but that is the way these days).

Cons: Keyboard has two "9" keys at the main register (no "8" ) key. After disappointing service from Razer telephone Tech Support, No choice but to RMA via Newegg, which will cost me $14.09 shipping, see below.

Overall Review: I contacted Razer's support line 3/7/11 at 1120 EST and though the operator, Tiffany, tried her best, I was told that it could take weeks for Razer to determine if they could send me the "8" key, if they had the key at all. After I requested a supervisor, I was told they were "in a meeting." It will cost me $14 to ship this heavy board to CA for a 1 gram piece of plastic (I would have happily paid for the key as it has to be cheaper and more convenient that shipping this thing). For a company that is supposed to make precision gaming equipment and charges a premium for their technology, Razer and their quality control should be very ashamed. I still want to replace this keyboard, but I doubt that I would risk more money for their products.

Manufacturer Response:
Hi Antoine, I am sorry about the problems with your Razer BlackWidow. The duplicate key is not acceptable and you should not have to deal with such an issue. Please accept Razer’s apologies for this mistake. I am a little confused by your comments as I can see from our support records that you contact us on 3/7/2011 and a replacement key was then sent to your address on 3/8/2011. The key is shipping from our California offices, should you not receive it in a timely manner please let the support team know and we will be happy to help you out. Thanks for your support and I hope you will accept our apologies for the troubles.
Robert L.
Ownership: 1 month to 1 year
Verified Owner
Get your divorce papers ready!1/3/2013 3:15:58 PM

Pros: This keyboard will transform any user into an experienced HAX0r in a matter of seconds. The keyfont is only readable by those fluent in the Matrix programming language making it exclusively usable to only you, repelling parental units (roommates) and other noobtacular relatives. When Gaming mode is engaged, a green crosshair with a G in the center will light up above the numpad, transforming you into 1337 gaming mode and while also looking sweet as hell. LOUD AS ****! Tired of having your wife nagging you to get back to bed and stop headshotting noobs at night? They will divorce you hands down of this purchase. Any amount of pressure on any of these keys will cause irreparable damage to your spouses ears. Need redbull to stay awake during working hours? Pffff THESE KEYS WILL MAKE COFFEE LOOK LIKE LIQUIDIZED SLEEPING PILLS. Need some more lighting in that dark cavernous basement you call a room? Turn the backlighting up to the highest setting and you won't need to press any keys to stay awake! BAM! 100 WATTS OF NEON BLUE. No need to play any futuristic game cause you'll be LIVING IN ONE.

Cons: Does not come with divorce attorney.

Overall Review: I purchased 154 units and paneled my walls with them to simulate the solar output of the sun.

Pros: I love that each key has its OWN L.E.D light and not just simply backlit, 5 levels of brightness, macro keys to go along with my Cyborg M.M.O 7 Mouse and its macro buttons, i love the clicks of each key, if your up late at night you may get shived as its very loud lol but its great for me, plus this keyboard is a upgrade from an old Merc Keyboard that wont let you press more than 4 keys, this thing lets you I don't know pres like 20 at once or something lol, perfect for high combo gaming

Cons: not a single thing wrong with it, other posts mention the space bar that sticks to either of the alt keys but this one does not, every key is clean and crisp! and that's no con!

Overall Review: Also the FN key makes as a stand alone key is great to know that all you need to do is hit that and the F-key you want and your golden, it has a nice gloss finish too!

Pros: This is my very first Razer product and I have been a PC gamer since 1993. Gaming keyboards...I've owned them all...and I mean them all. Some have nice backlighting but crummy software, some have nice built in LCD screens but crummy backlighting, some have detachable 10-key pads, some have special "gaming only" movement keys, some are desk pigs and others are just not enough. I could go on about the mushy or tactile feel of the keyboards I've used etc or how I could never find the one that was "just right"....but I think that this keyboard to me seems a perfect balance between form and function. They keys are clacky, but no more than a mouse click and I find the sound pleasant. The backlighting is brilliant, adjustable from fully off to bright and beautiful and the macro software is streamlined and efficient - it is not a background resource hog like the software for other products I've tried. Keyboard very well done, Razer.

Cons: Nothing is perfect but this product is very close. Only one complaint here; really its more of a preference....how about a matte black keyboard for a change? Bottom line: this thing is a fingerprint - dust attracting shiny magnet beauty.....keep a microfiber cloth handy to clean it if you want to get rid of the dust and fingerprints without scratching it.

Overall Review: For quality mechanical gaming keyboards its really down to two IMO....the BlackWidow and the SS 6Gv2. If you're a backlighting addict like me and you need macro support, get the BlackWidow - its money well spent.

Cons: The ONLY problem i have with this is my F7 key led doesn't work and i didn't notice this immediately. I'm not sure if i can RMA this or what but i have to take it down a star for this flaw.

Cons: strange font on the keys. alternate characters like the %, ^, & and so on are not lit (only the numbers are lit). keys feel mushy and lack the crisp feeling other mechanical keyboards offer. keys often double strike, especially the spacebar. first failure after less than 60 days. support is non existent (notice there are no replies from Razer reguarding the poor reviews). media keys require the use of both hands to adjust volume, mute, etc. (hold function while pressing one of the function keys).

Overall Review: this keyboard is definitely not a wise choice. i have ten dollar keyboards that do not fail within the first 60 days like this keyboard did. razer has not responded to numerous e-mails. i urge you to consider a different keyboard. if you still purchase this keyboard remember that you were warned.

Manufacturer Response:
Hello Hoodathunkit, I am sorry to read of any issues you are having with your Razer BlackWidow. If you are still having any trouble with your BlackWidow may I suggest you contact the Razer Support Team at www.razersupport.com/email or by phone at 888-697-2037. They will be happy to solve any problems you may be having. The support team gets back to the vast majority of all emails within 24 hours. If you have emailed them and not heard back you may want to check your spam and junk folders. I am very sorry about any issues, but we will make sure your keyboard works the way it should. Razer|Wave