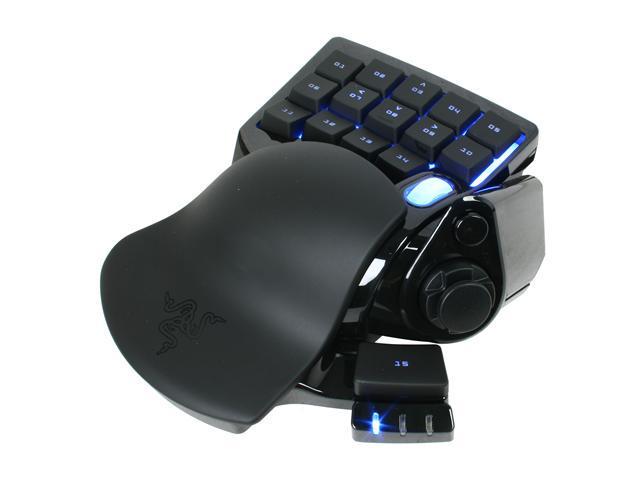 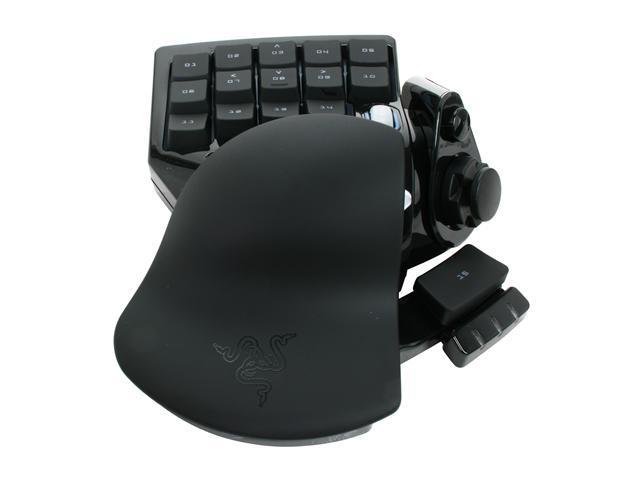 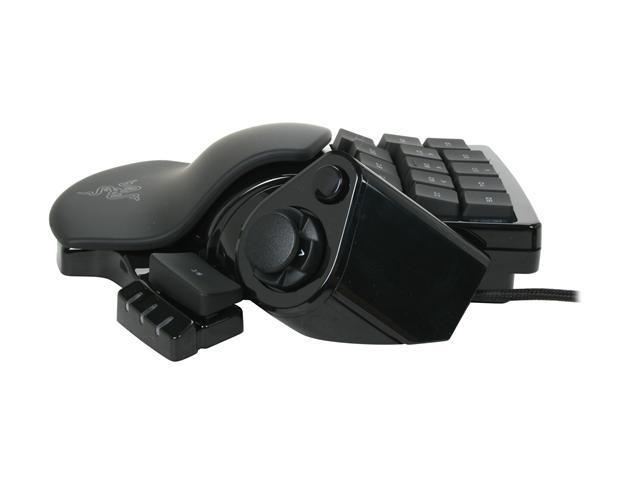 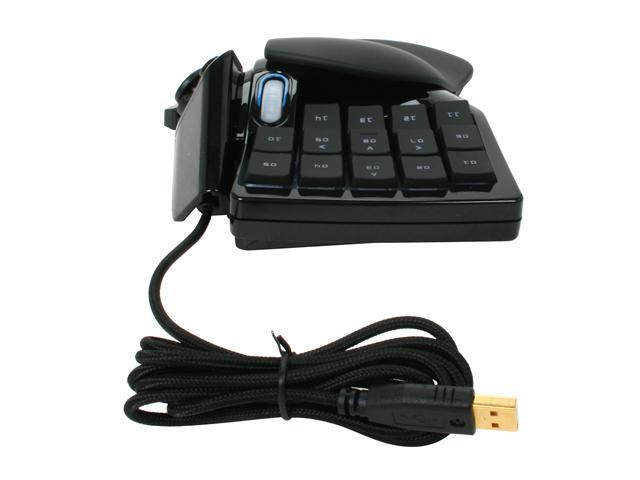 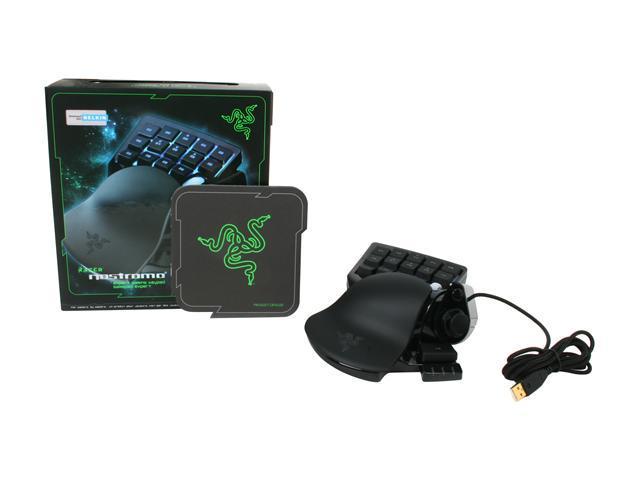 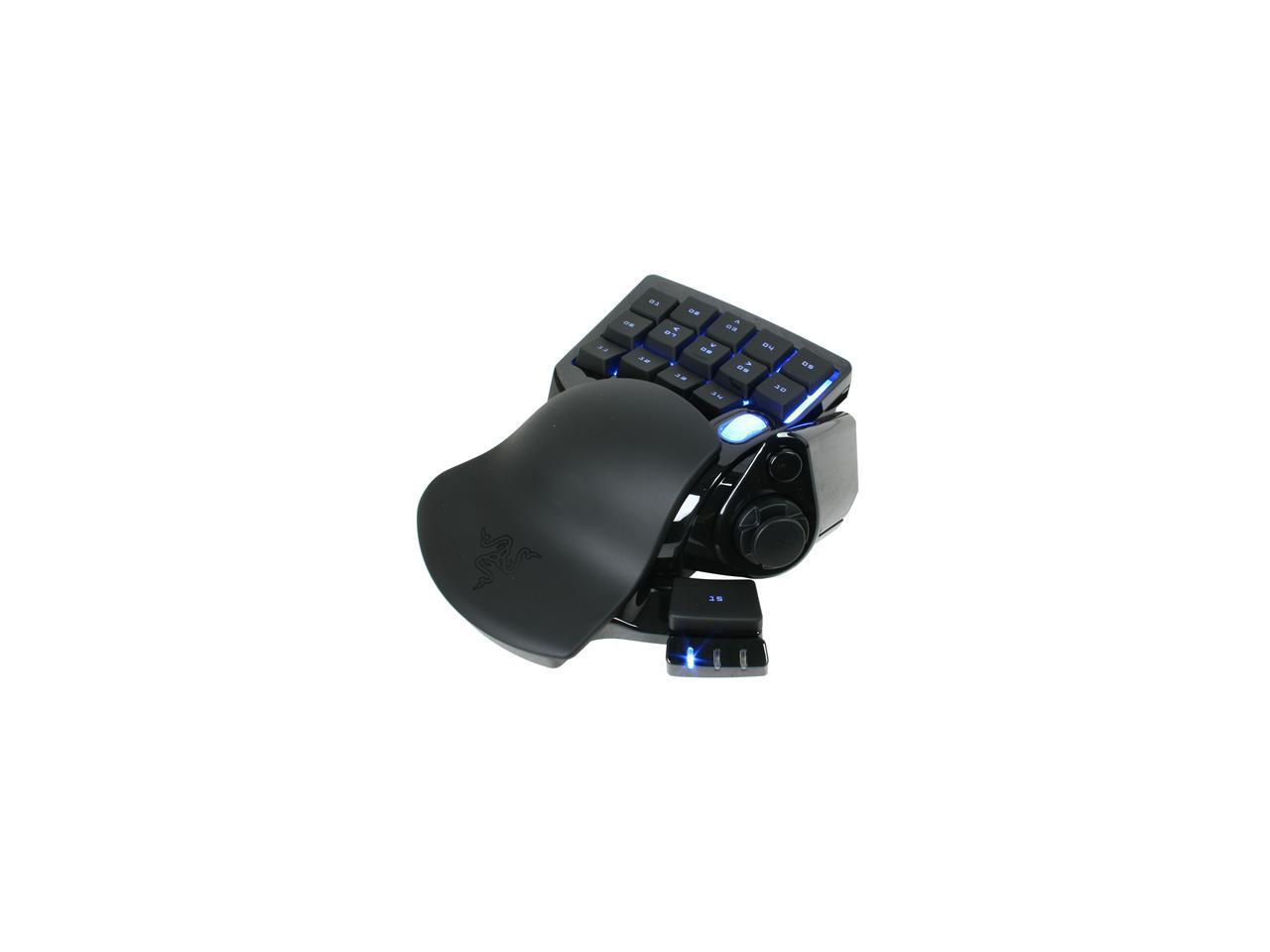 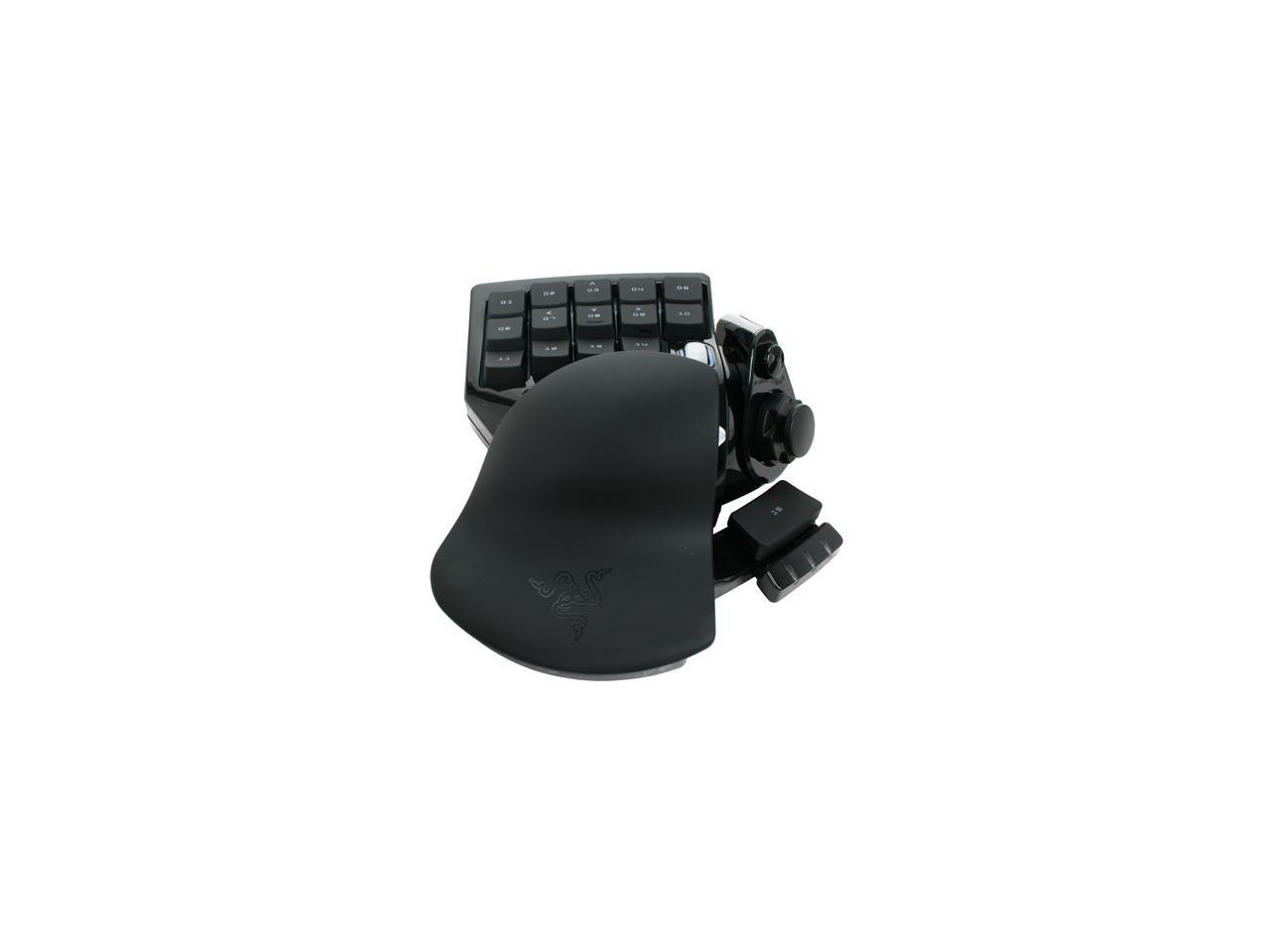 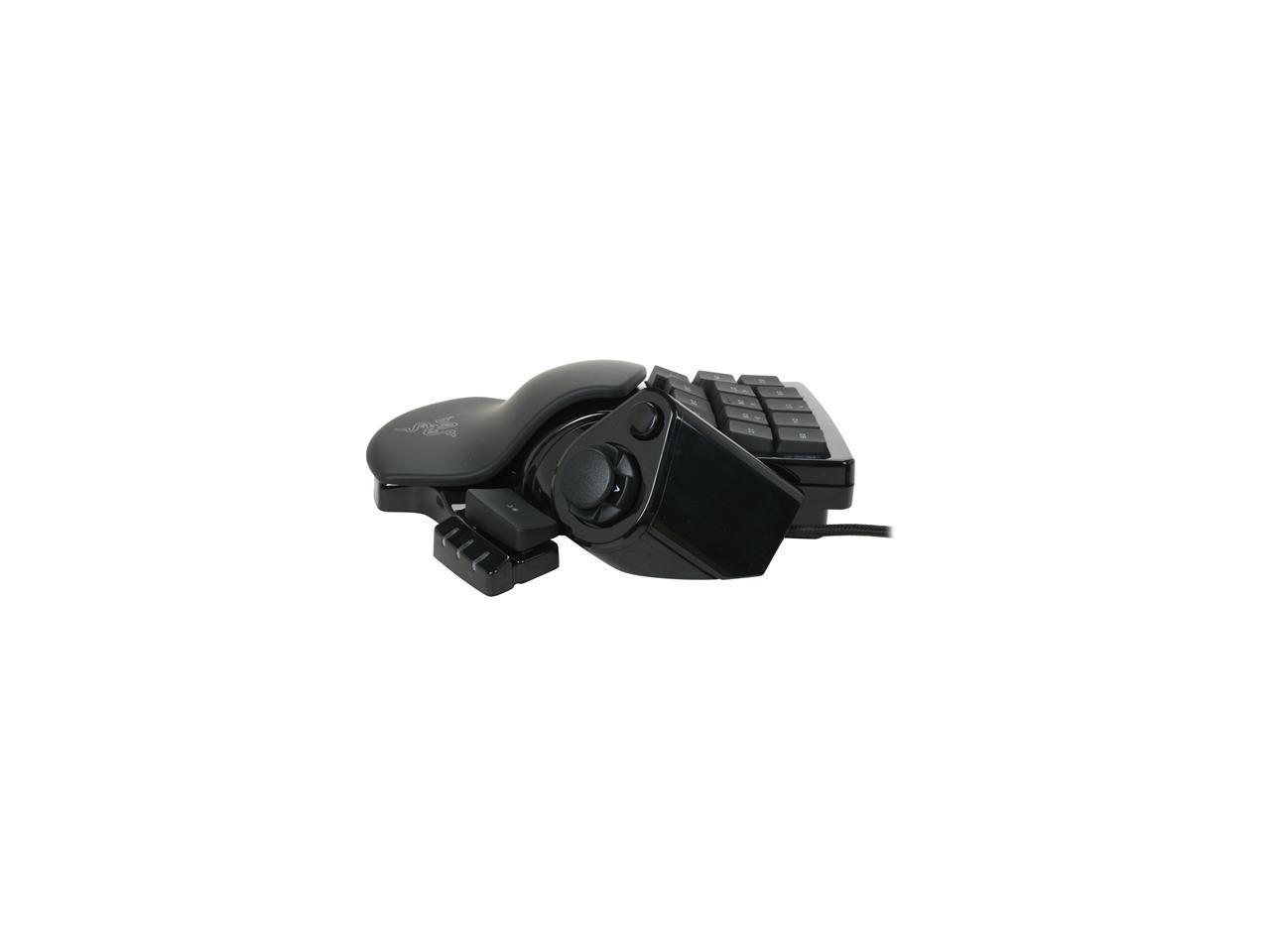 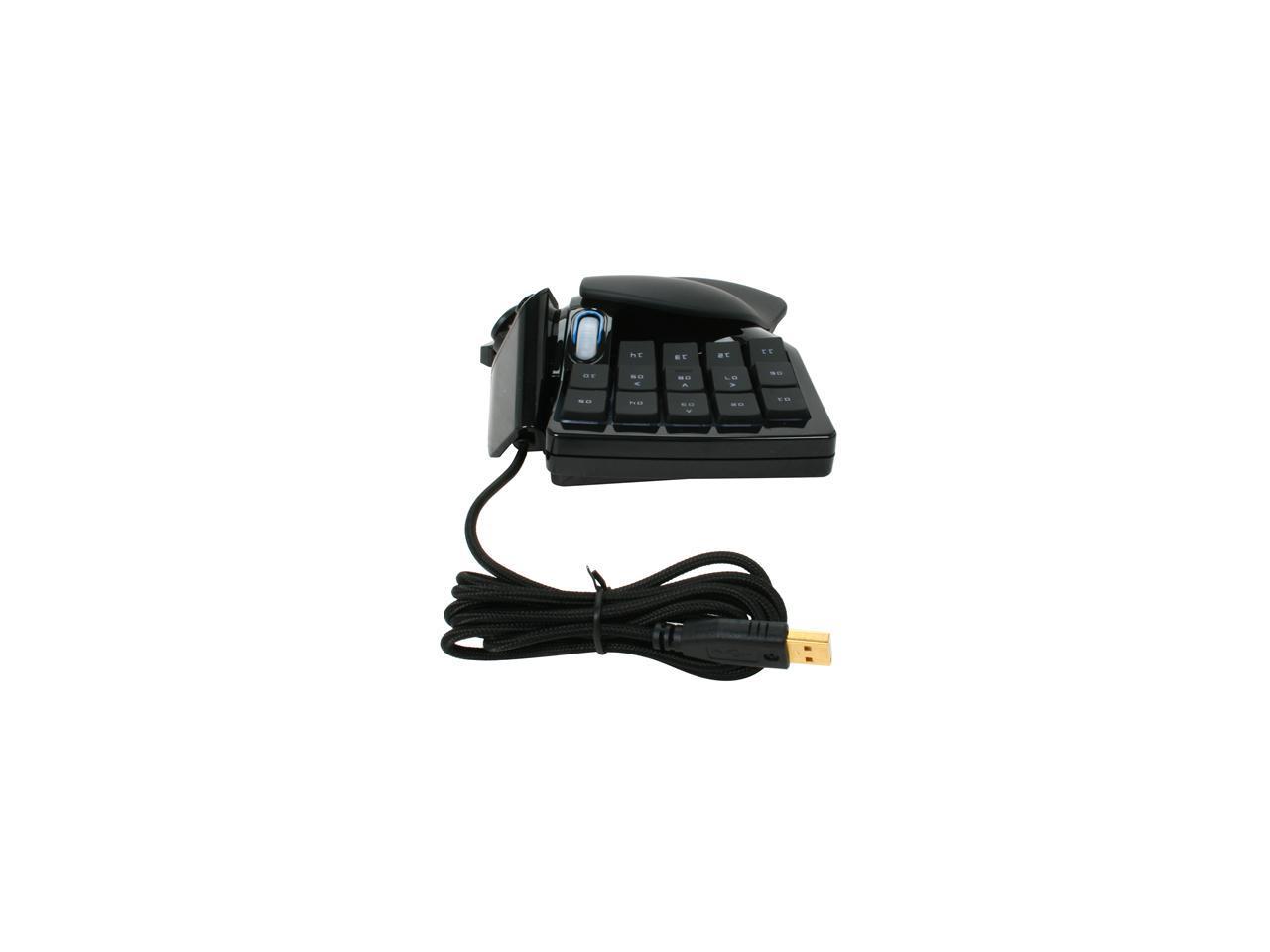 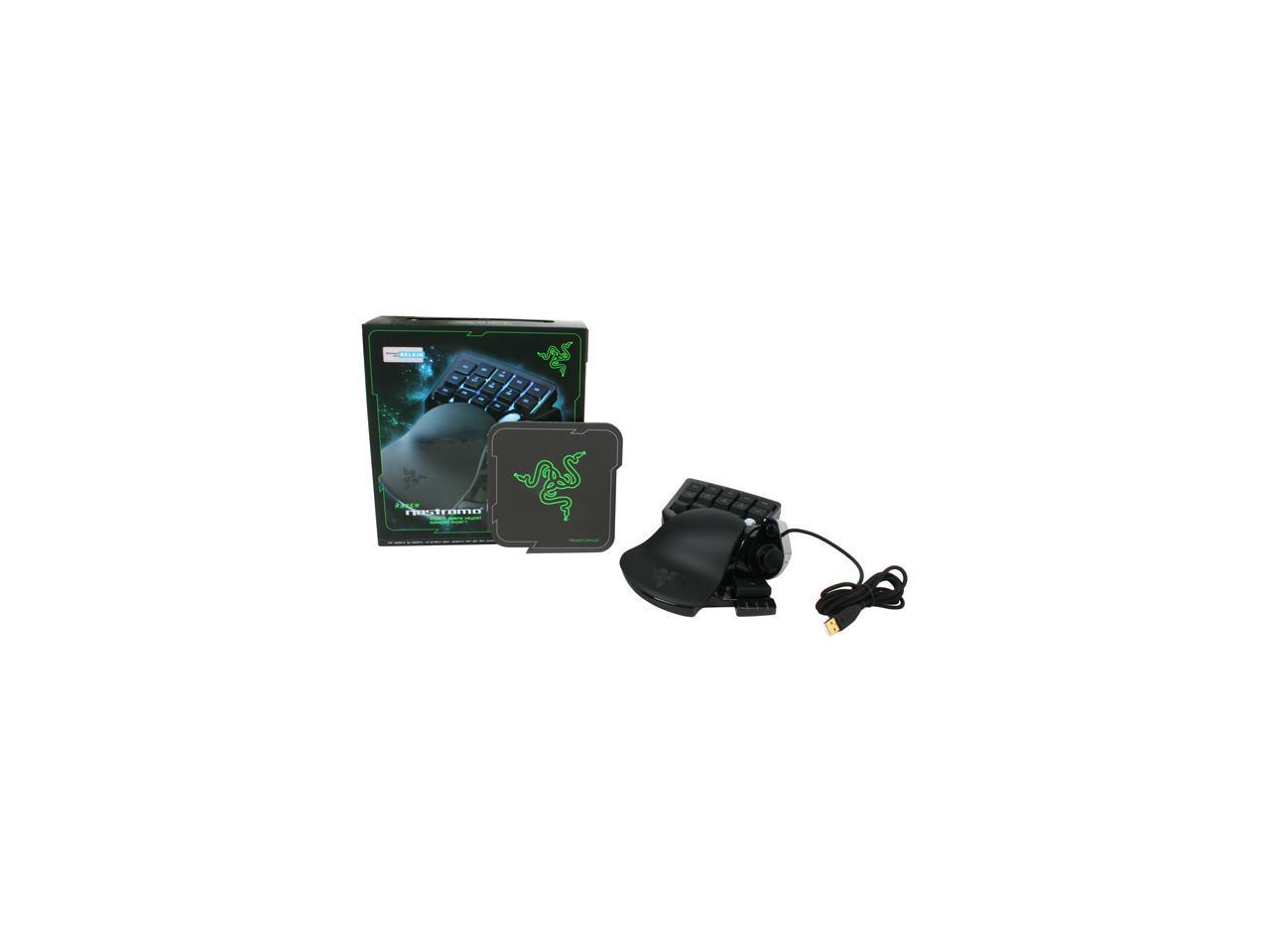 Learn more about the Nostromo

Pros: feels like the old speedpad, and is awesome for fps's. Keyboards hurt my left hand after awhile of gaming so i have used the original n52 for years

Cons: dpad is not as programmable as old one and limit's you to what you can use it for/frowny face for razr. and software tries to do it's own thing (never seen anything like it) except on their mice???? so they lose an egg

Overall Review: I was thinking about going with the g13 but I could not find one in town to try or buy so I went with this and was worried because anything this company touches has software glitches and the non ability to program dpad is bad but i just changed all my games to match it/sigh also I had to save the profile 3 times to get it to hold my 9 key (what's funny is I didn't change it d key the software kept changing it to "c" or "q")it kept changing it on it's own but now it all works. as always remember razr products have software glitches but you can get aftermarket software for them.

Pros: -really nice for hotkeys, useful for music, CAD-ing, and general computer navigation -highly customizeable -many, many keys to play with

Cons: -took me a few hours to totally configure, mostly due to a glitch that pretty much disables it's ability to run a programs' .exe directly; solved by adding keyboard shortcuts to my desktop icons - macro editing could use an add feature; forgot to kit a key? guess you have to re-record the entire macro. or insert a group of commands and then trim out the keys you dont need

Overall Review: -software could be improved a little by fixing program execution and macro generation -otherwise an excellent product -looks quite sharp

Pros: Bear in mind, everything is based in comparison to the Logitech G13. + Much, much more ergonomic, with a curved design that your hand can rest on very easily, and feels natural. + The hand rest is adjustable, making this more ideal for people with smaller hands (such as myself). + Larger buttons, with a more sensible layout, for less fat-fingering. + Rubber pads along the bottom to prevent sliding. + The mouse wheel is interesting for keybinding something that you may be using quite often, especially if you've shifted your hand position slightly to the right (I.E, your ring finger is resting on the key normally designed for your middle finger). + Back lit, and has a more flashy, "gamer-esque" appearance to it. + Braided cord, for those of you who look for that kind of thing.

Cons: Bear in mind, everything is based in comparison to the Logitech G13. - The analog stick is not a true analog stick; it's a D-pad with a plastic head attached to the top of it. Said plastic doesn't have any real catch, so my thumb keeps slipping off, generally making it much more difficult to maneuver with it than with the G13. - Far fewer buttons than the G13, which means trying to import my keybinding set up from the G13 was impossible. (I know there's a newer version of the Nostromo that has another row of buttons to possibly alleviate this, but the current price point is too high for me.) - It's much lighter than the G13, and frankly, flimsy. I feel like I could break it by pressing too hard on it. - Lack of a button to switch keybinding set up on the fly, resulting in me having to go to the software or bind it to something on my keyboard (which ruins the purpose of it being switchable on the fly). - Absolutely no software included, with no indication of where to obtain the software. This could be a plus, as many included CDs have outdated firmware, however, the lack of info on where to obtain it could probably trip some people up. - Totally superficial, but there's no way to change the back-lighting color. I'm vain, I know.

Overall Review: Bear in mind, everything is based in comparison to the Logitech G13. Honestly, between the two, I'm still torn. If the Nostromo had another 2-3 buttons added to the farthest right row (where there's currently a neat looking but useless ridge of plastic) and an actual analog stick -- or even an analog stick with a rubber top for better grip -- the Nostromo would win handily for me. Even as is, I'm going to continue using the Nostromo to see if I can get used to the differences in its layout, but the noticeable drop in button quantity and the stiff/awkward analog/d-pad is a pretty big stumbling block for me. The comfort is absolutely unrivaled, though, and worth taking a look at for that reason alone.

Pros: Well made, buttons have very nice feel, backlighting is nice, joystick is removable from dpad, excellent and easy to use software, excellent ergonomics and very comfortable, every key is programmable

Cons: Joystick itself is a joke, ruins the feel of the dpad. I removed the joystick (simply by pulling out) and the dpad works great. It has good feel and is plenty usable for movement instead of wasd keys in all types of games. Known/unfixed issue with newest software/driver on razers site causing diagonal movement not to be registered. Luckily I read about this before purchasing and went out and found driver version 1.03 which you can find by googling and everything works great. Short usb cord

Overall Review: To get diagonals to register you need to unbind the diagonal movements in the software. This will not work in the newest driver/software pack, you need to download old driver/software version 1.03 and then it works great. Overall very well made, takes some getting used to for movement instead of basic WASD but nice to have a dpad for movement if you want.

Pros: Nice and comfortable for people with large hands. Clean button layout, I don’t accidently hit other buttons. The USB wire is threaded and lays loose and is nice and long. Windows 7 compatible

Cons: The back light is always on, you can dim it to 10% and then make it fully bright but the drivers lack an option to turn off the light or at least change the color from blue.

Overall Review: Since I upgraded to windows 7, my original nostromo n50 isn’t supported so I bought this to replace it. The drivers work well, but you have to get them from razers website and there are so many download options it can be confusing. The programming screen is very similar to the original except on the original you could hit a button on the nostromo and it highlighted the button on the programming menu - with razer, it doesn’t. All my old nostromo profiles/configurations do not import..bummer… The directional thumb pad within the programming screen isn’t set to the same orientation as the actual d-pad so it's kinda confusing when programming. Works with my old games such as BF1942/DC and with my new games such as BF Badco2. Over all, if you are like me and got used to playing battlefield with it in the past and just cannot use the keyboard for that game, it is a must have. Windows 7 compatible.

Pros: Very comfortable and ergonomic. Beautiful. Great responsiveness, and lot's of flexibility in setup. Once broken in and past the learning curve, very difficult to live without. Greatly enhances the gaming experience, and makes response times faster when used properly.

Cons: Steep learning curve. D-pad is initially very stiff (but gets better after breaking it in). The software is good overall, but has several limitations and bugs that hold it back from it's full potential. You can't bind two keys to a single keypress. The d-pad when used for movement only works properly in it's default configuration (which means that you have to bind your game to the arrow keys instead of, or in addition to, WASD). The latest version of the software has introduced bugs with the D-pad so that it doesn't work right in some games. If you run into this find the v1.03 driver and install it instead. Unfortunately, they have removed it from their website.

Overall Review: I've used this heavily in MMO's using the d-pad in place of the arrow (or WASD) keys. When used with the mouse, movement becomes faster and easier freeing up fingers to fire off powers. Had some problems in some games with latest driver (v2.02). Downgraded to v1.03 and problems cleared up, but that driver is no longer on Razer's site. Overall the hardware is a 9/10 with room for improvement in the d-pad. The sofware though is only a 6/10 with some serious limitations and bugs affecting some games. If the software was improved this could become a "must have" gaming accessory. Nevertheless, if you are willing to put in the effort to configure things properly, and get past the learning curve you will be rewarded with a significantly improved gaming experience.

Pros: -This thing is AMAZING for RPGs. Do you hate having to move your hand to the "I" button to access your inventory, "K" for skills, etc? Not anymore, you don't! Example: For Dragon Age, I put character, inventory, skills, and tactics on the Up, Left, Right and Down thumb pad. This way I don't have to map all over the keyboard, and I can access the menus rapidly. -The customization is endless....SO many options, and it's pretty easy to switch profiles. The fact that there is a Blue, Red, and Green light to indicate different profiles (Seven total variations) is really great. I'm told it's even possbile to use this to play Starcraft, and there are various keymapping threads on the internet. Especially with that game, being able to navigate the map using your left thumb, and not having to move our hands all over the keyboard are definitely plusses.

Cons: Sadly, this seems to be made for people with a specific hand size. I'm 6'0", and my hands are slightly larger than normal. Sadly, this gamepad is a little bit too small for my hands. It's not a big issue, and I still love the pad, but I had to subtract an egg because this variability could EASILY have been attained. The handrest seems almost detachable, so why couldn't they have made it so that it moves back a bit? That would have solved the hand size issue, since I would be able to rest my fingers and hand at the same time, rather than having to put my wrist in the wrong place in order to not have my fingers be weirdly arched to touch the keys.

Overall Review: The thumb analog stick is removable (simply pluck it out), and I highly suggest doing so. For me the stick just gets in the way of the thumb button.

Pros: Very comfortable, easy to get used to, and very convenient. I really enjoy the software, which was very easyto figure out, and map controls. Great how you can move the wrist guard to fit your needs. Overall, very impressed.

Cons: They could move the space button up a little to make it more comfy, but its easy to get around and is very minor.

Overall Review: I may be slightly biased because I am a Razer fanboy :)