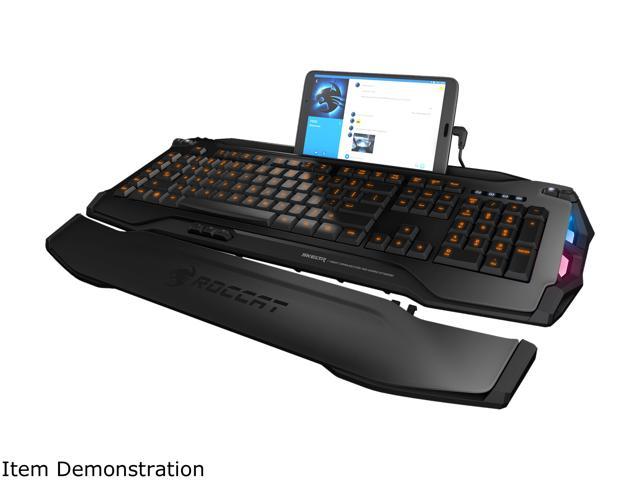 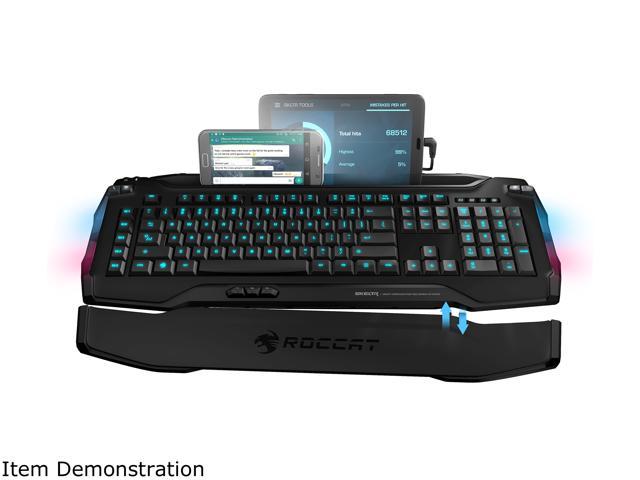 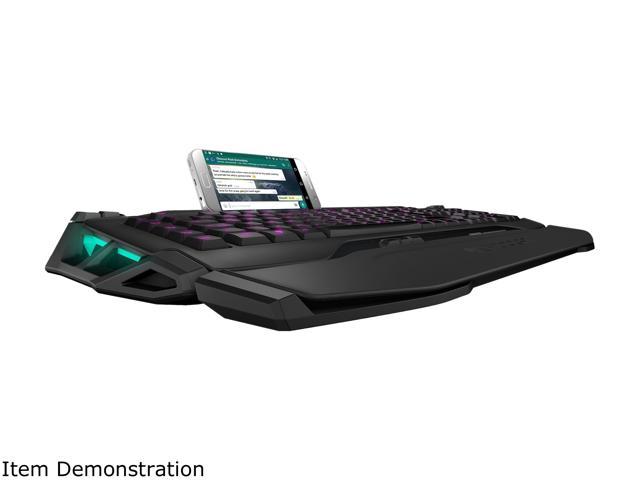 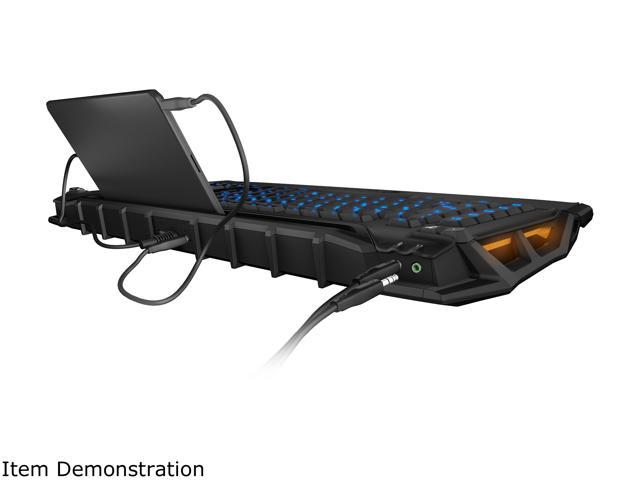 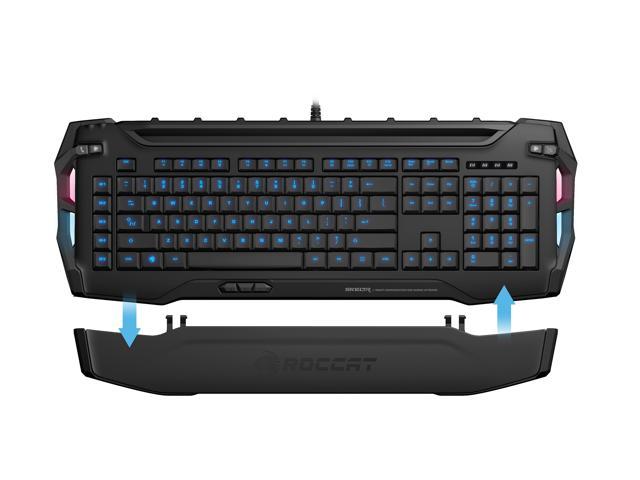 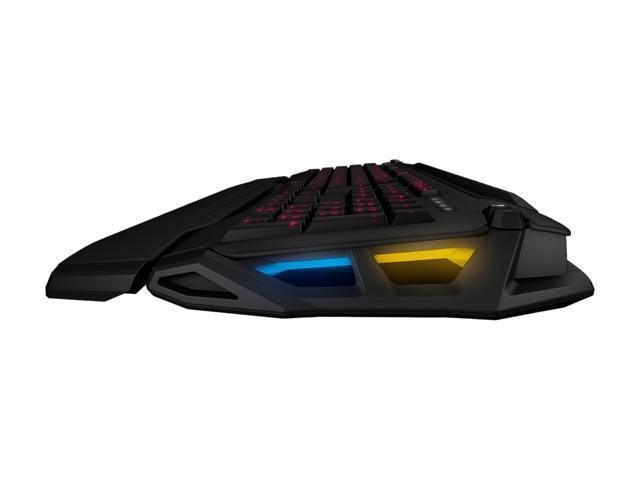 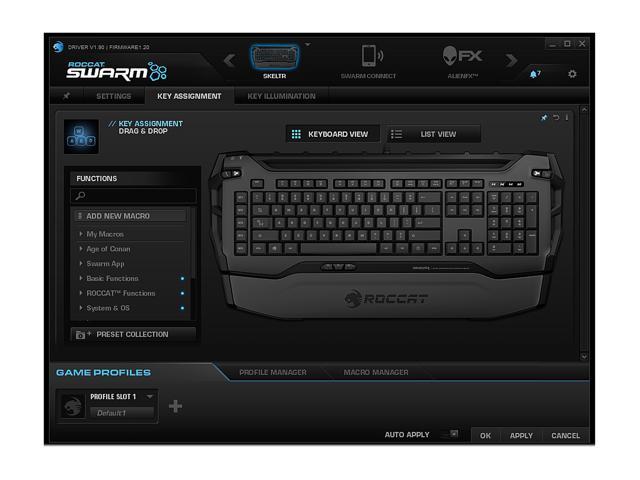 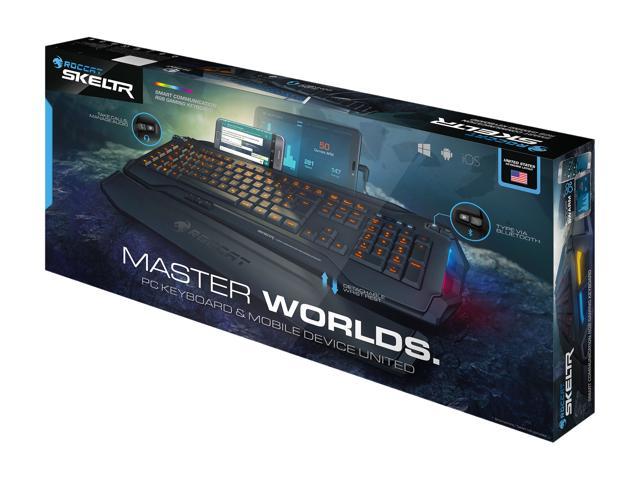 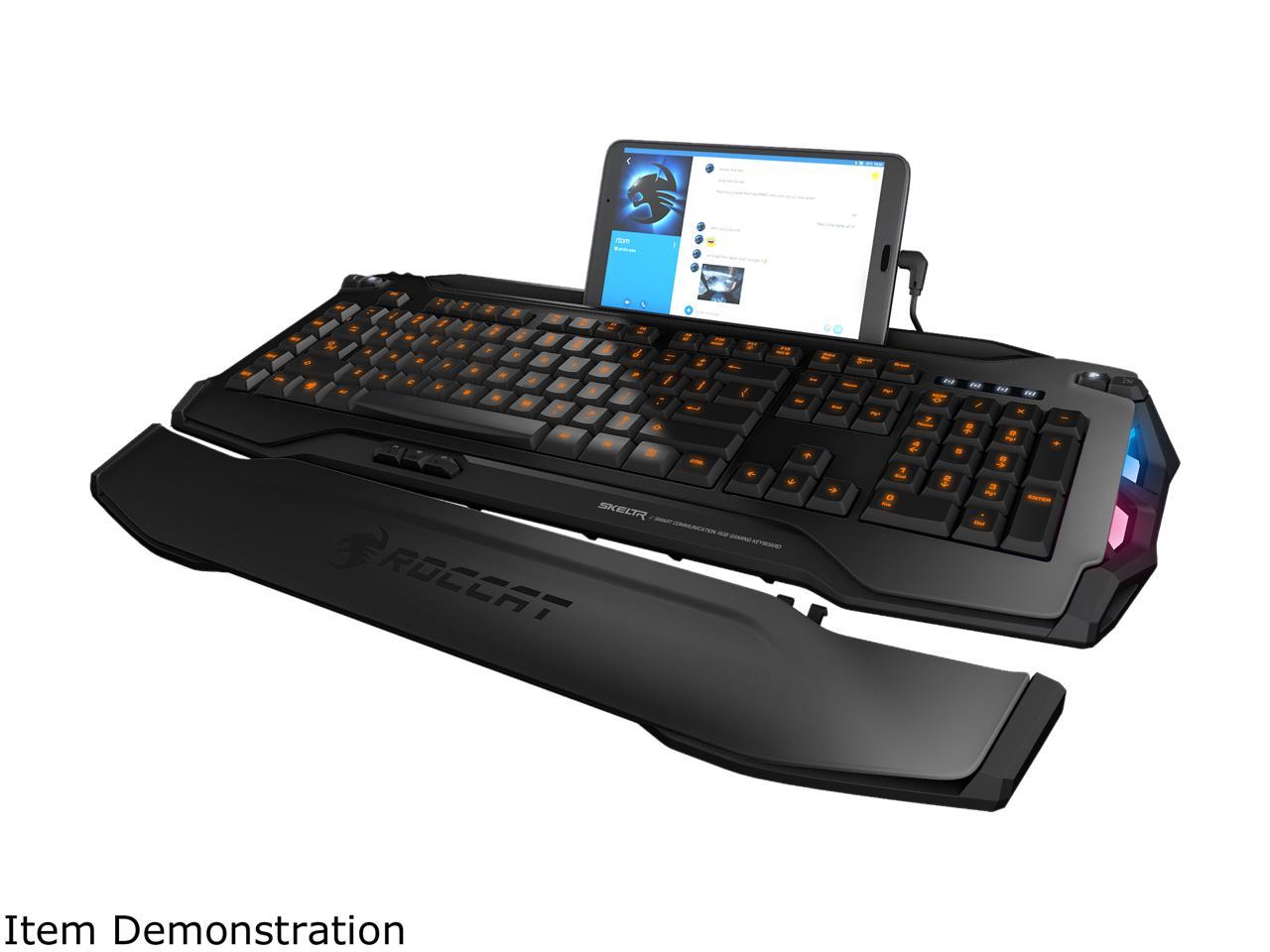 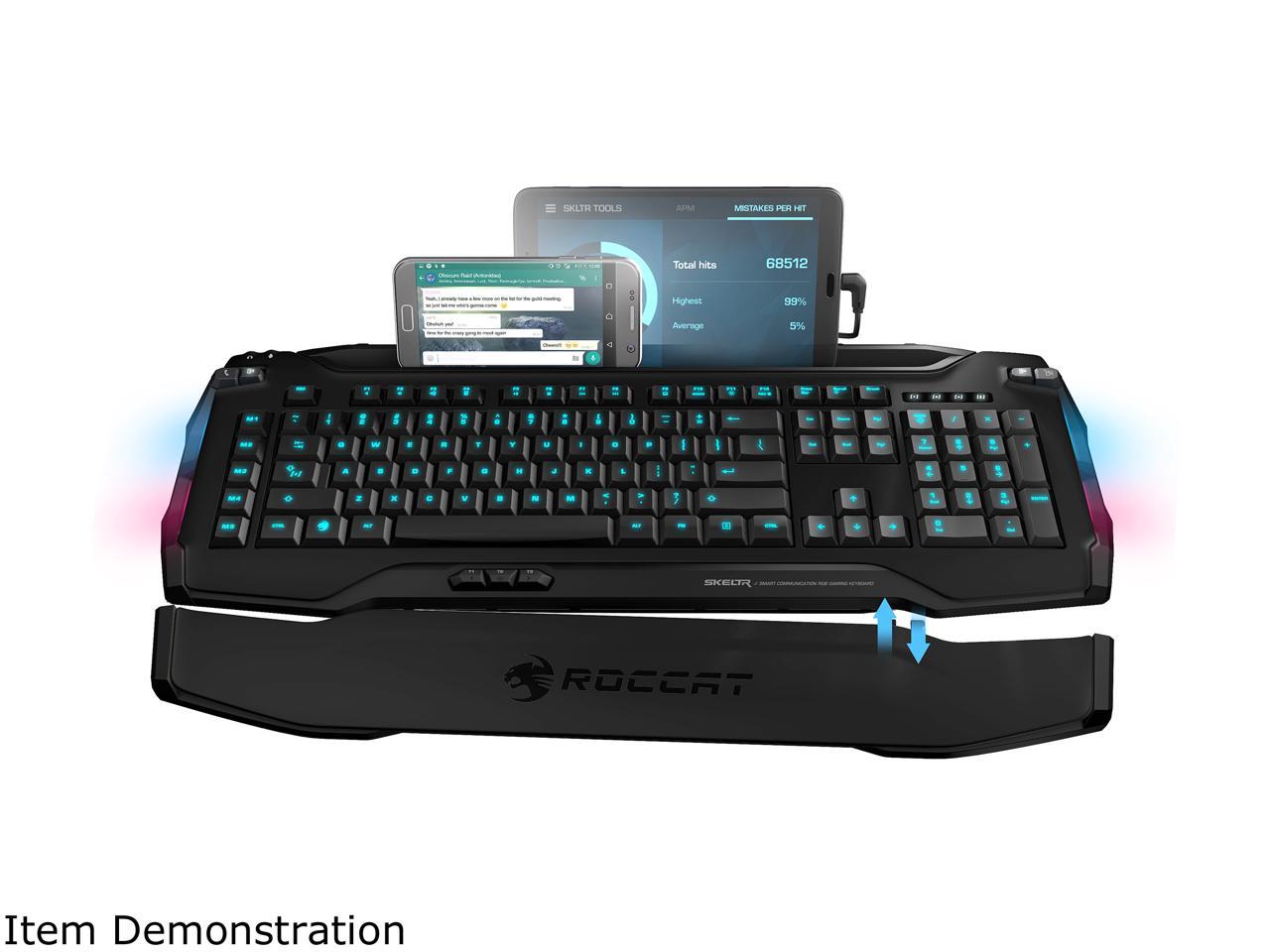 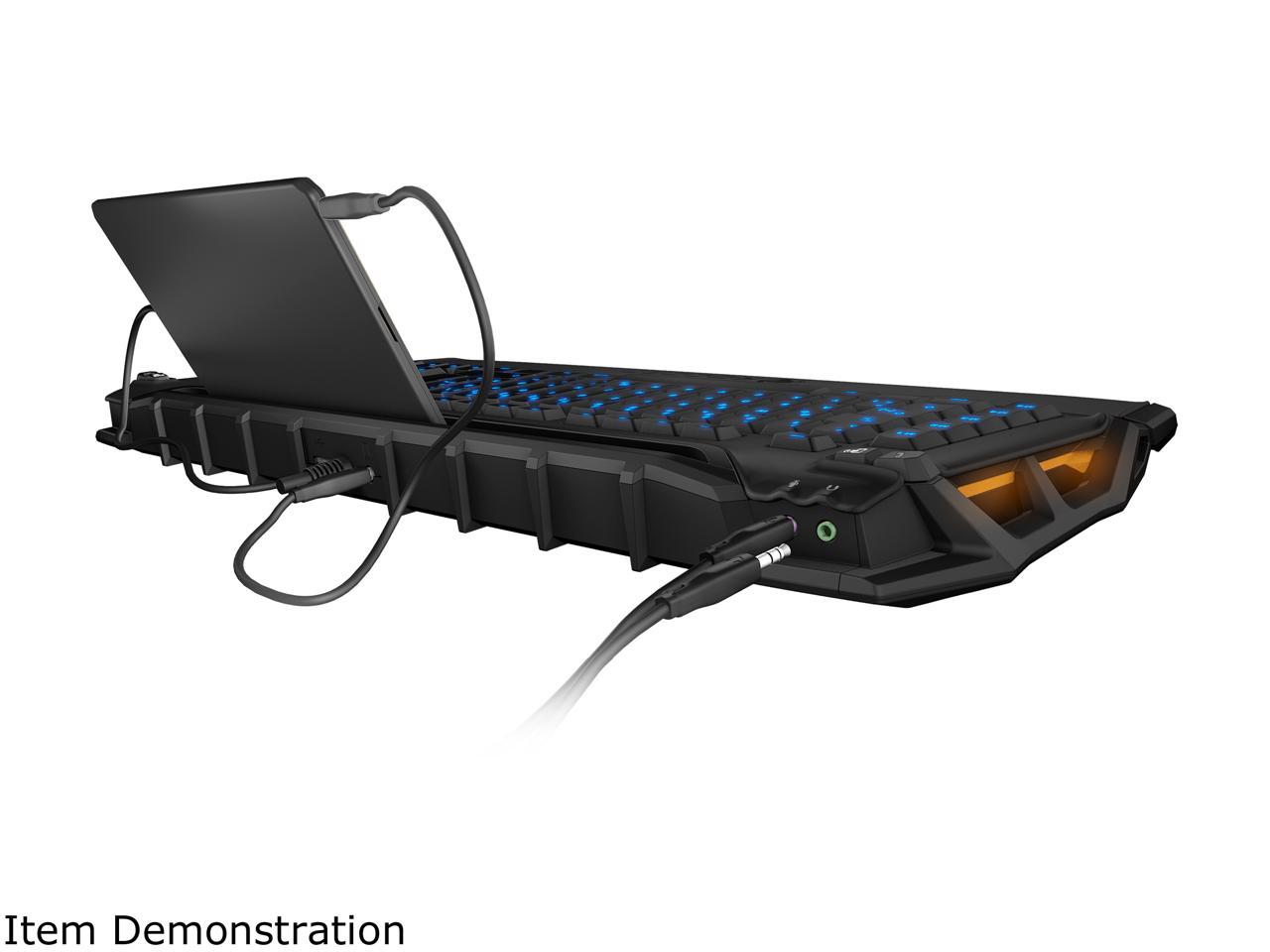 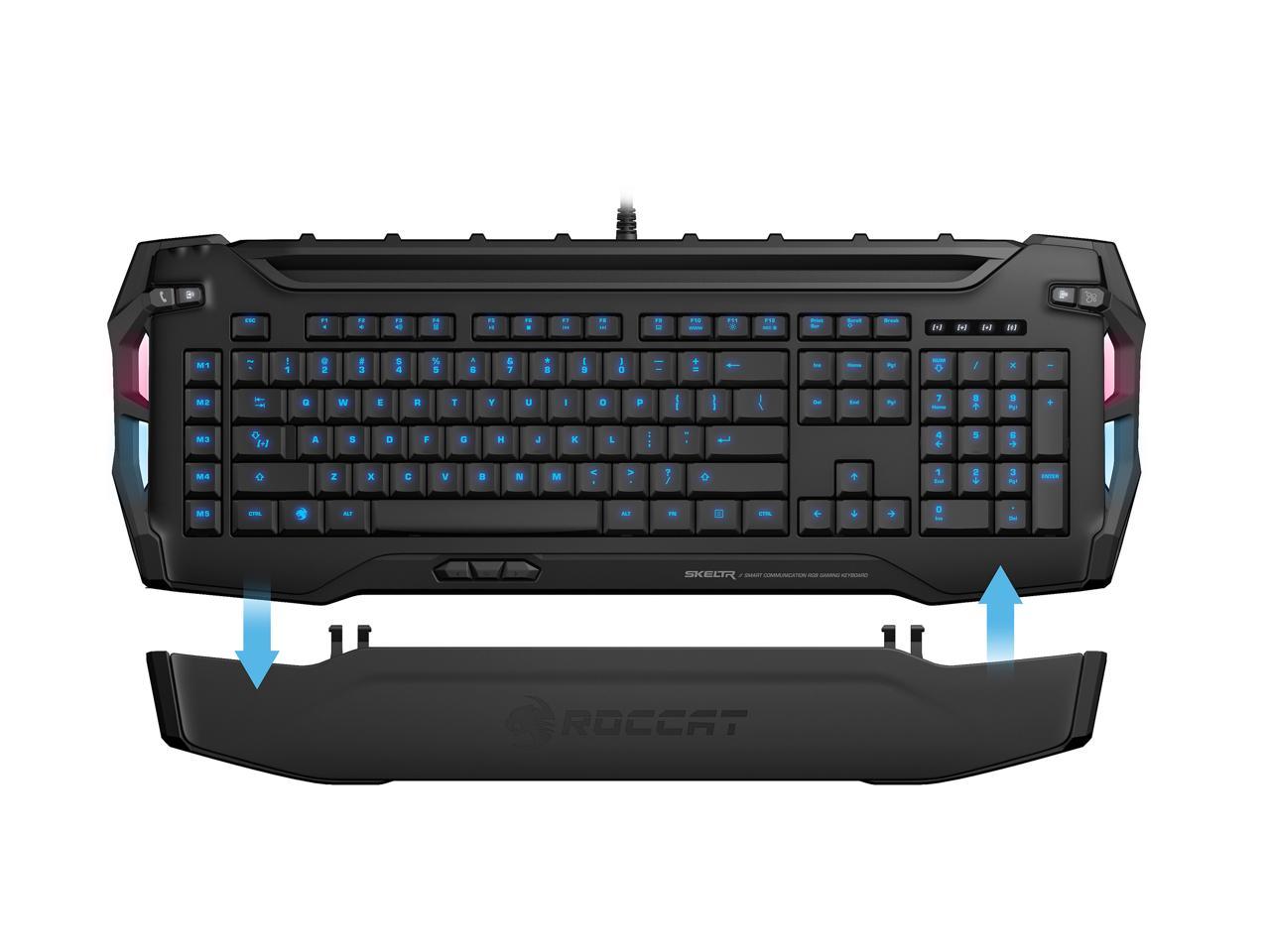 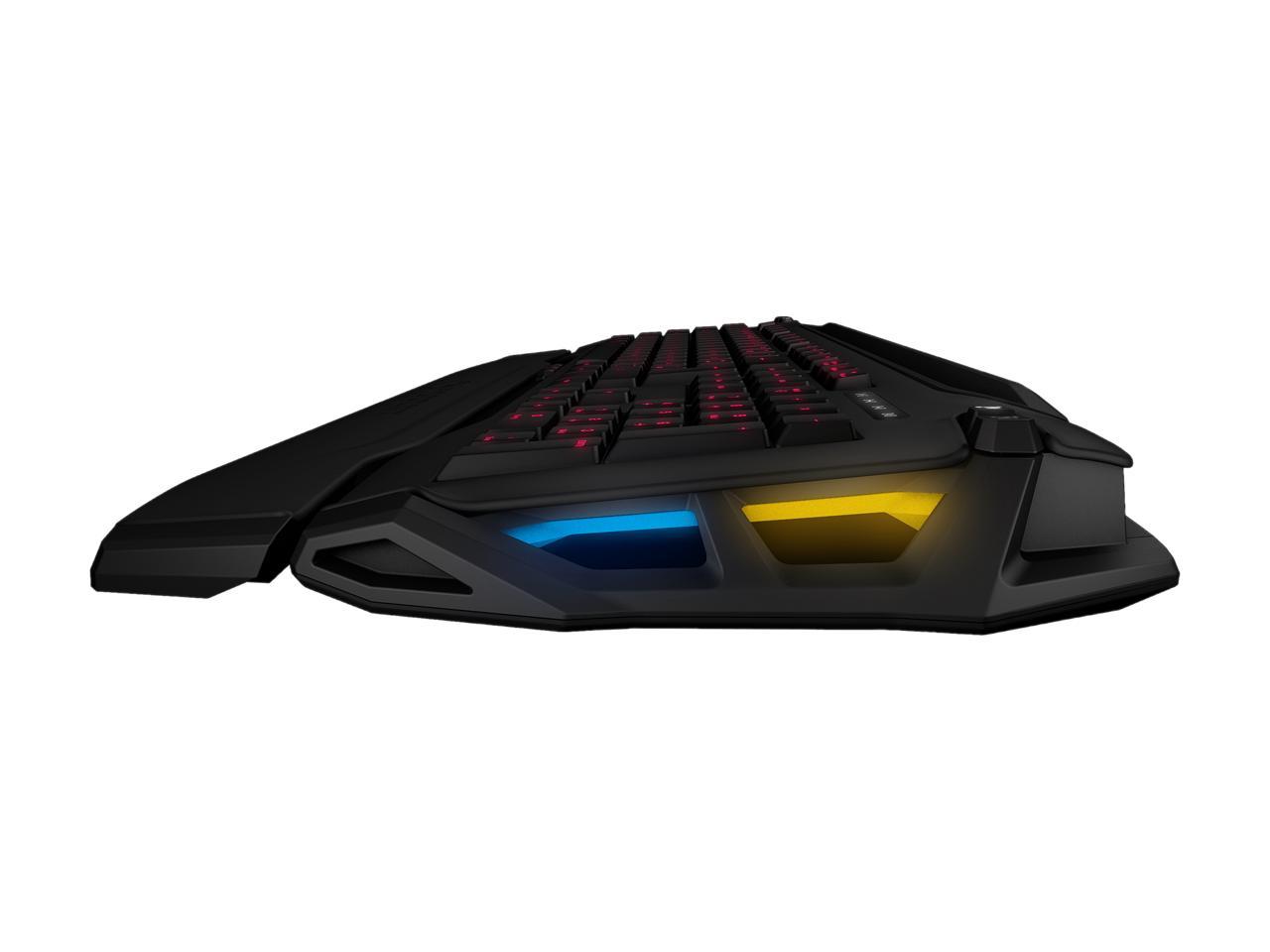 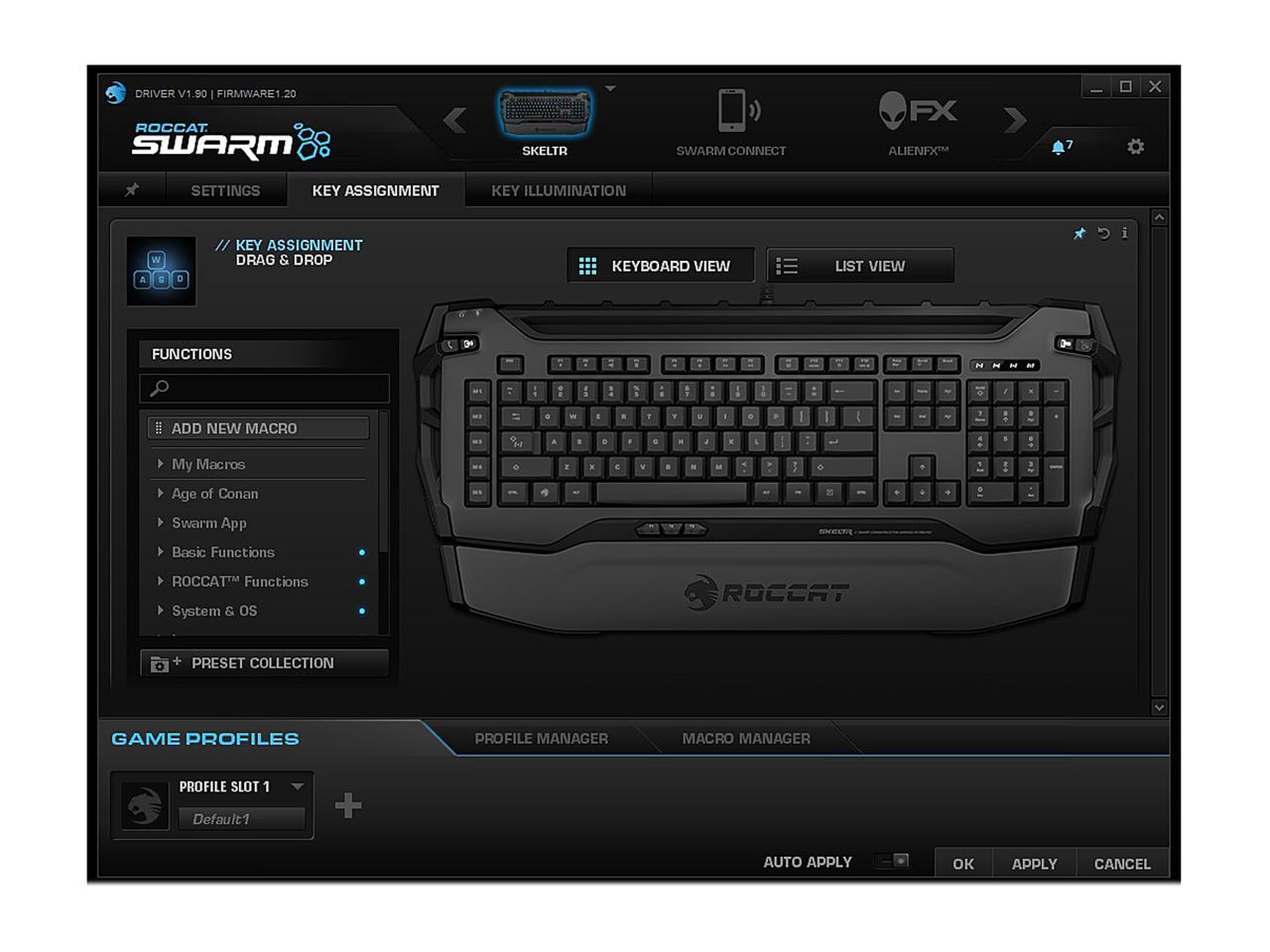 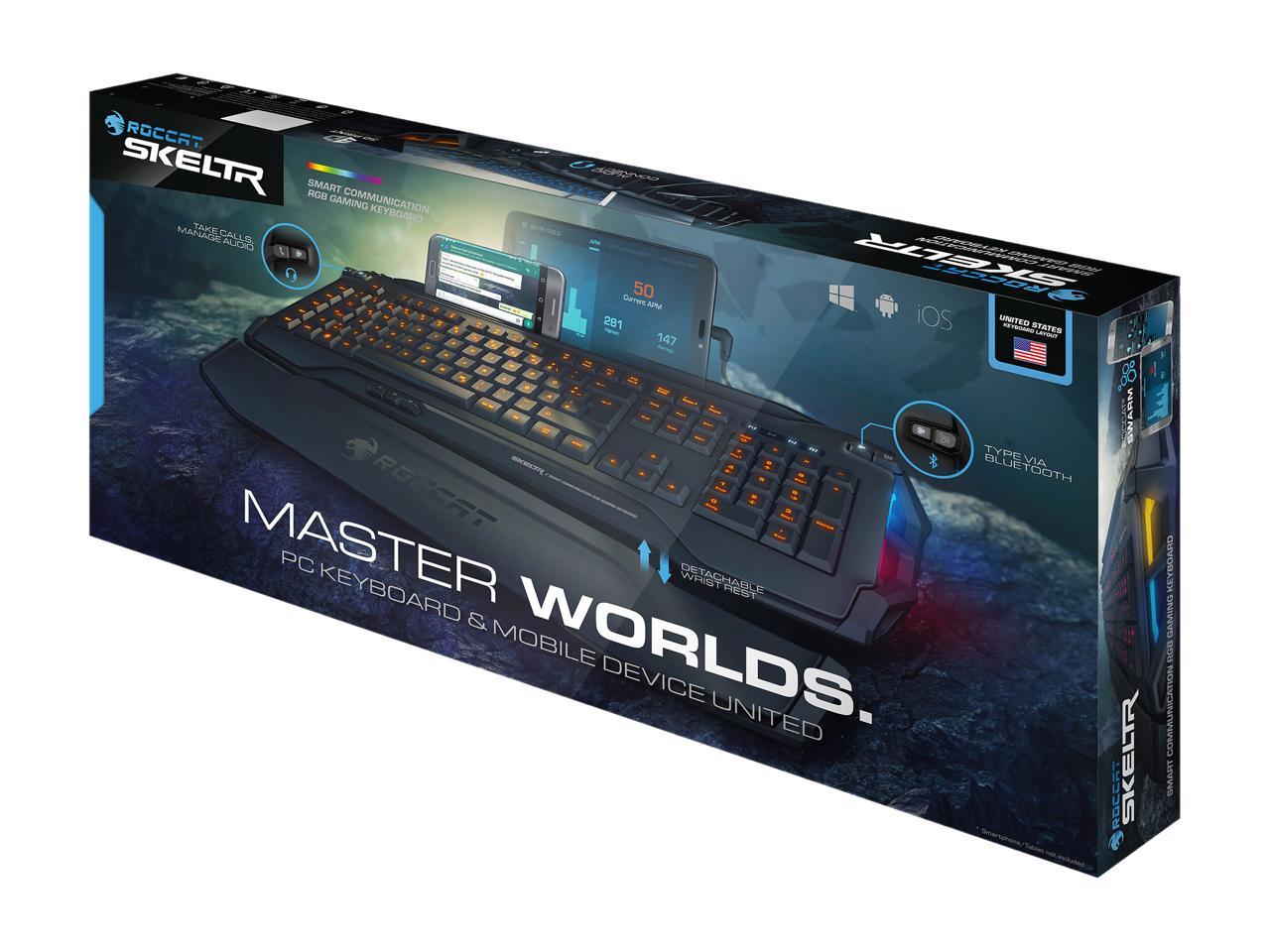 The Skeltr is the full-powered keyboard that unites your peripherals and mobile device, creating an unstoppable gaming force. Taking device integration to a new level, it consolidates your control by bringing your smartphone or tablet into the fold and putting it right on the frontline for all your battles.

Say goodbye to swapping between device and computer as you interrupt your gaming by responding to messages; say hello to the keyboard that lets you master worlds. Say hello to the Skeltr. The biggest challenge posed by integrating a mobile device into a gaming keyboard is where to put the mobile device itself. The market for keyboards with smartphone or tablet integration is full of products with flimsy adjustable docks and holders comprised of cheap plastic parts that break easily. No thanks. To meet this challenge we devised a device docking slot discreetly positioned on the rear side of the keyboard. It works with virtually every mobile device on the market and features no movable parts that break easily. You're in-game and on a roll, top of the scoreboard on your server. Oh no, what's that? Out of the corner of your eye you see the notification light on your phone flash. You take a short time-out to pick up your phone and reply to your friend's message, but meanwhile you're sinking down the scoreboard without a trace. Every gamer knows this problem. The Skeltr fixes it. It lets you toggle between system and device typing at the touch of the button, so you can hammer out a quick response to your friend without interrupting your gaming, letting you finish the round on top. The Skeltr makes it so you'll never need to pick up your mobile device while gaming. Not for messages, and not for calls either. With your smartphone and headset connected to the Skeltr, you can take calls through your headset without interruption by simply hitting the Call button. Want to listen to some tracks that are on your phone? The audio button lets you quickly toggle between PC and mobile device as an audio source. The increasing computing power of mobile devices has led to an ever-expanding list of games featuring companion apps. Mobile is here, and it's here to stay. The Skeltr lets you take full advantage by placing your smartphone or tablet front and center of your gaming experience. ROCCAT®'s very own Power-Grid™ app is the start. It works as an advanced and fully-customizable remote control for your PC, letting you connect to, monitor and control your software. Perfect for the Skeltr. Swarm provides next-level computer to mobile device integration for Skeltr. PC side it works as a veritable gaming command HQ, offering a software and driver suite plus an overview of all your ROCCAT® device settings. Smartphone side it’s an extension of the computer software, letting you quicklaunch games, configure illumination options, check your APM, your GPU/CPU temperatures  – and more. Also features Talk® FX + AlienFX™ support, providing lighting effects for your favorite games in 16.8m colors.

Learn more about the Skeltr

Pros: Built-in macro 3 extra thumb button Pretty low-profile keys Extra USB 2.0 slot at the back of the keyboard (use for charging mobile device)

Cons: Poor key quality. 9 month in, the paint on "A" and "W" key is already falling off, some of the corners are also getting scratched off. Compare to a laptop keyboard that I own for 5 years and the paint is still there 100%, this is unacceptable. Lighting is not bright enough for red, or purple. Roccat Swarm is pretty terrible of a software, you will have problem updating it, or even launching it. Various patches and fixes and the problem still exist. Not exactly are cons, but they are stuff that you somehow think it should work that way, but it doesn't The key to switch to the bluetooth device is quite far out... if you look at the picture, it is the 2nd right most button on the keyboard, the key that is above the - key on the keypad. You cannot copy a link using this keyboard on your PC and paste it into your mobile device. You can switch input language in your phone, but it will only switch it between what you have on your phone. So if you have English > Chinese in your PC and you only have English on your phone, you will not be able to type in Chinese into your phone

Overall Review: I never have a gaming keyboard before.

Cons: - RGB lighting is uneven under each key, looks terrible - Bluetooth typing has lag which is extremely long, and sometimes misses or repeats typed letters - Audio from phone is not compatible with USB headsets - Randomly quickly disconnects and reconnects and goes dark which both happens after restart; fix is to unplug/replug - Colors on monitor do not match colors on board

Overall Review: - Uses 2 USB ports, one for keyboard the other for the onboard (phone) port; advantageous for power distribution, disadvantageous for more than one port - Who would want a "typing sound" every time they hit a key? - Who would prefer Easy-Shift instead of Caps? - Hopefully future updates will fix some of the software/bluetooth problems I'm having

Cons: - Very unsatisfying membrane keys. - The plethora of cables makes everything toward the back of the keyboard a little cramped and messy. - To hook the keyboard up, there are FOUR different plugs-ins you have to insert into 4 different sockets. Two of them are different USB plugs into 2 differnent USB sockets, in addition to having to plug in 2 other jacks (I don't know what they are, but they were light green and Pink), OR THE KEYBOARD WON'T WORK. That's insane. - Have to plug your speakers into the keyboard, which looks stupid, if your computer only has one audio input, since the keyboard will take up that spot. - The phone button can take calls and transfer them to your computer headphones, but only under fairly restrictive conditions. You must plug both your phone and your headset into the keyboard; if you have a wireless or USB headset, you're out of luck. Accepting calls works as advertised, but you can't actually hang up. - The Skeltr's biggest sin is in its membrane key design, which is, by definition, cheap. In the $160 range, you can get some truly excellent mechanical keyboards, such as the Corsair Gaming K70, the Logitech G610 Orion Spectrum, or the G.Skills Ripjaws KM780. To charge $160 for keys that are only slightly more comfortable and responsive than those on a $20 office keyboard is unthinkable. - While the Skeltr offers a backlit, colored keyboard, it's not a full RGB peripheral like many of its mechanical counterparts. Instead, it offers five different lighting zones. This is a good idea in theory, except that the "keys" all count as a single zone; the other four are the extraneous vents on the sides. Aside from that, there are just a few breathing effects, which are unimpressive. The color is functional, but profoundly disappointing, given what Roccat's competitors have pulled off. - Roccat's Swarm software is awful. - Out of the box, some of the keys don't function like normal (capslock, for one). You have to go through the terrible Swarm program, into an obscure setting to change the key's function. All of this is extremely non user friendly as well. - The Skeltr is marred by a convoluted setup and an exorbitant price. Dishing out $70 or $80 for a membrane gaming keyboard is a hard pill to swallow; at $160, the prospect boggles the mind.