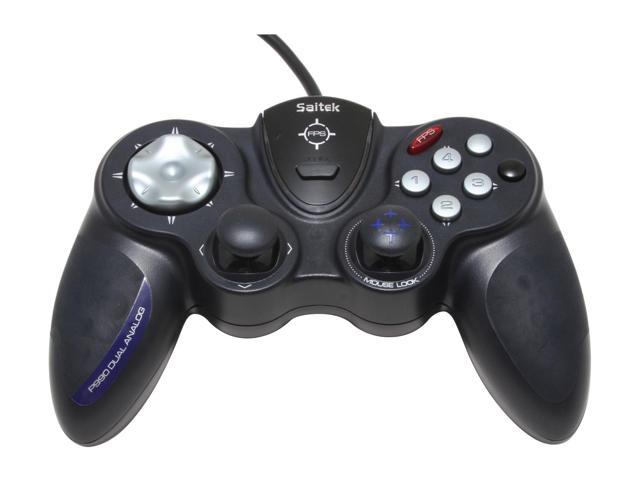 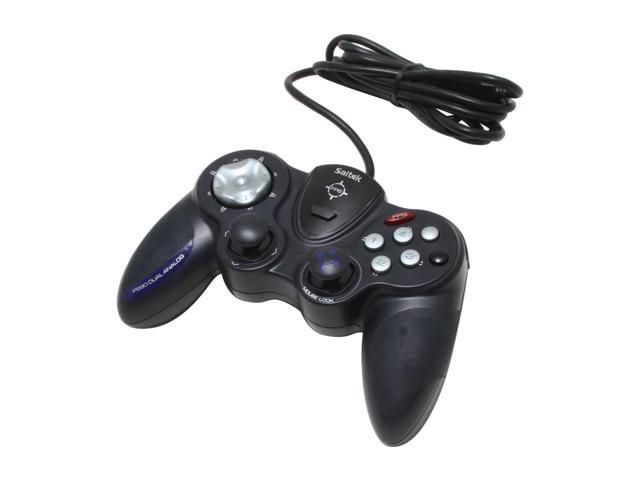 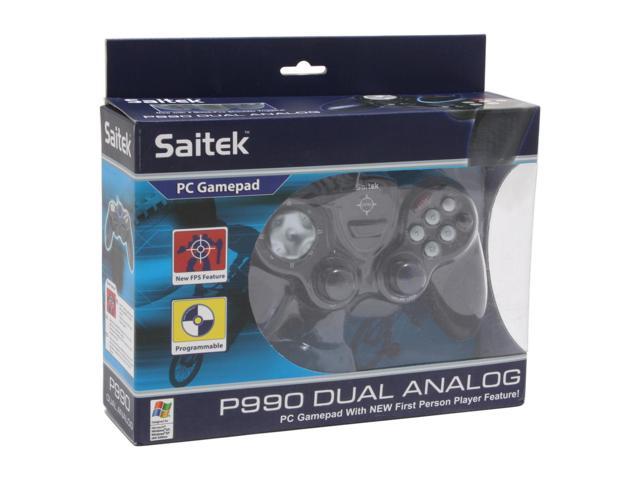 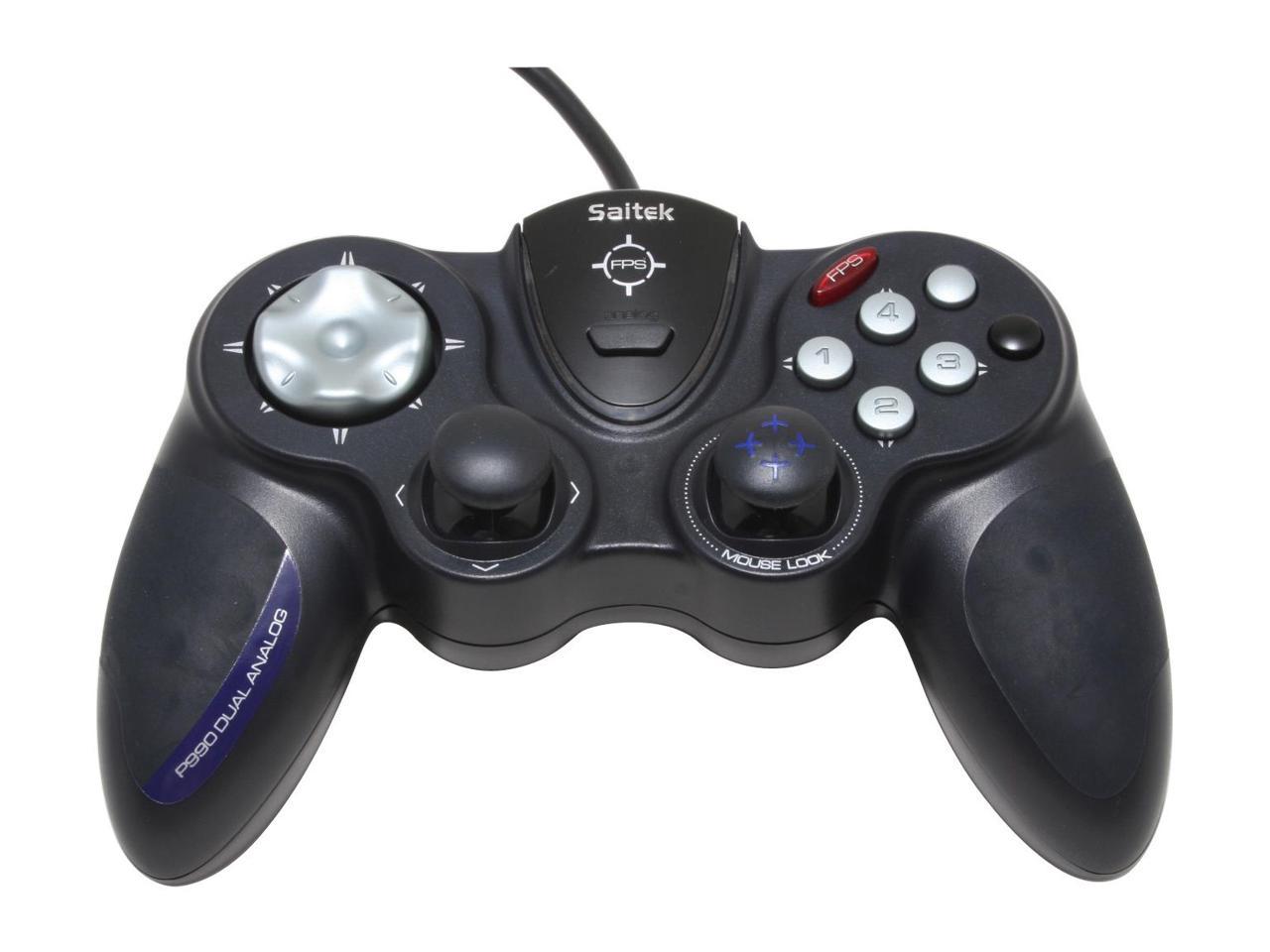 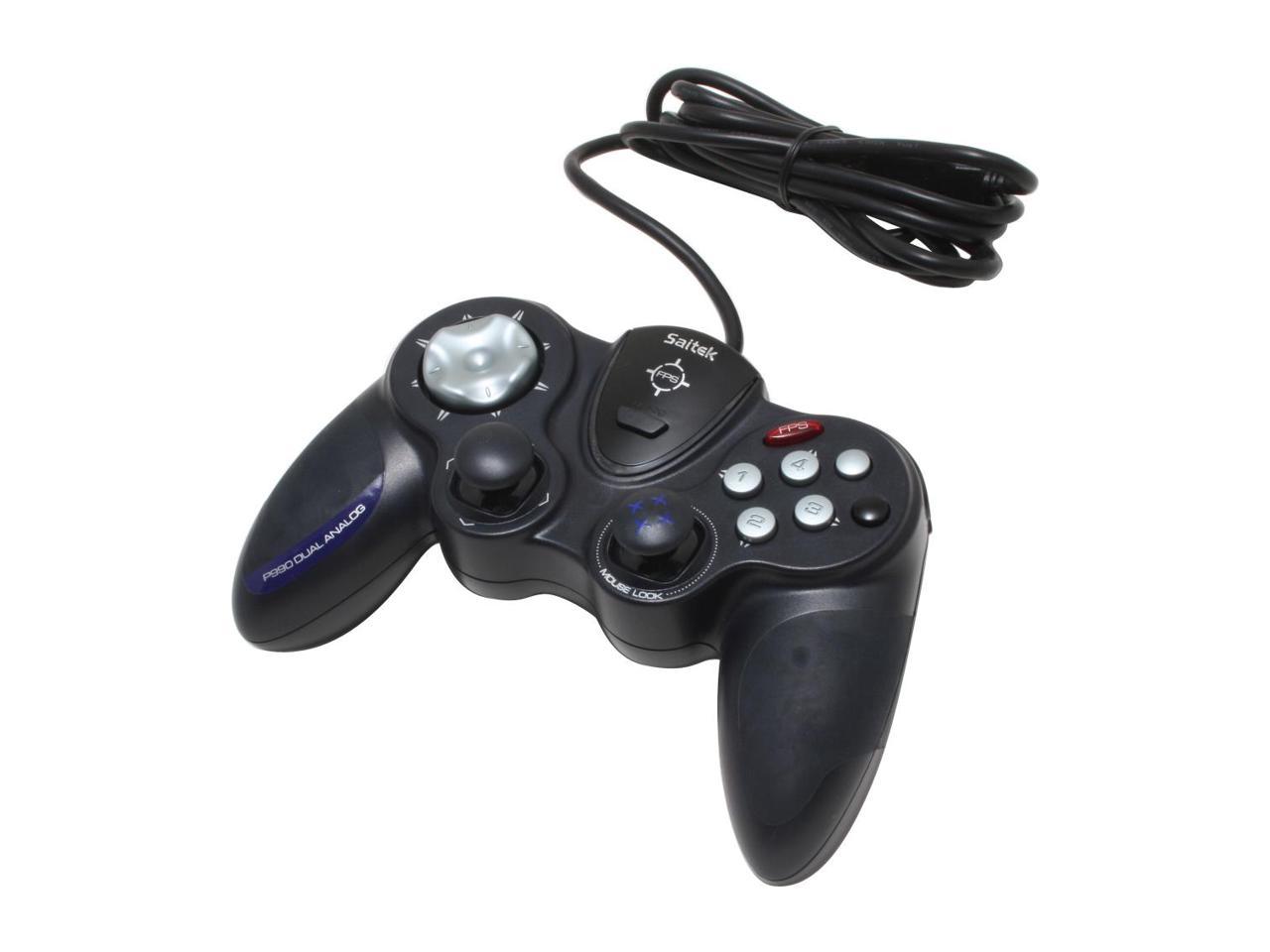 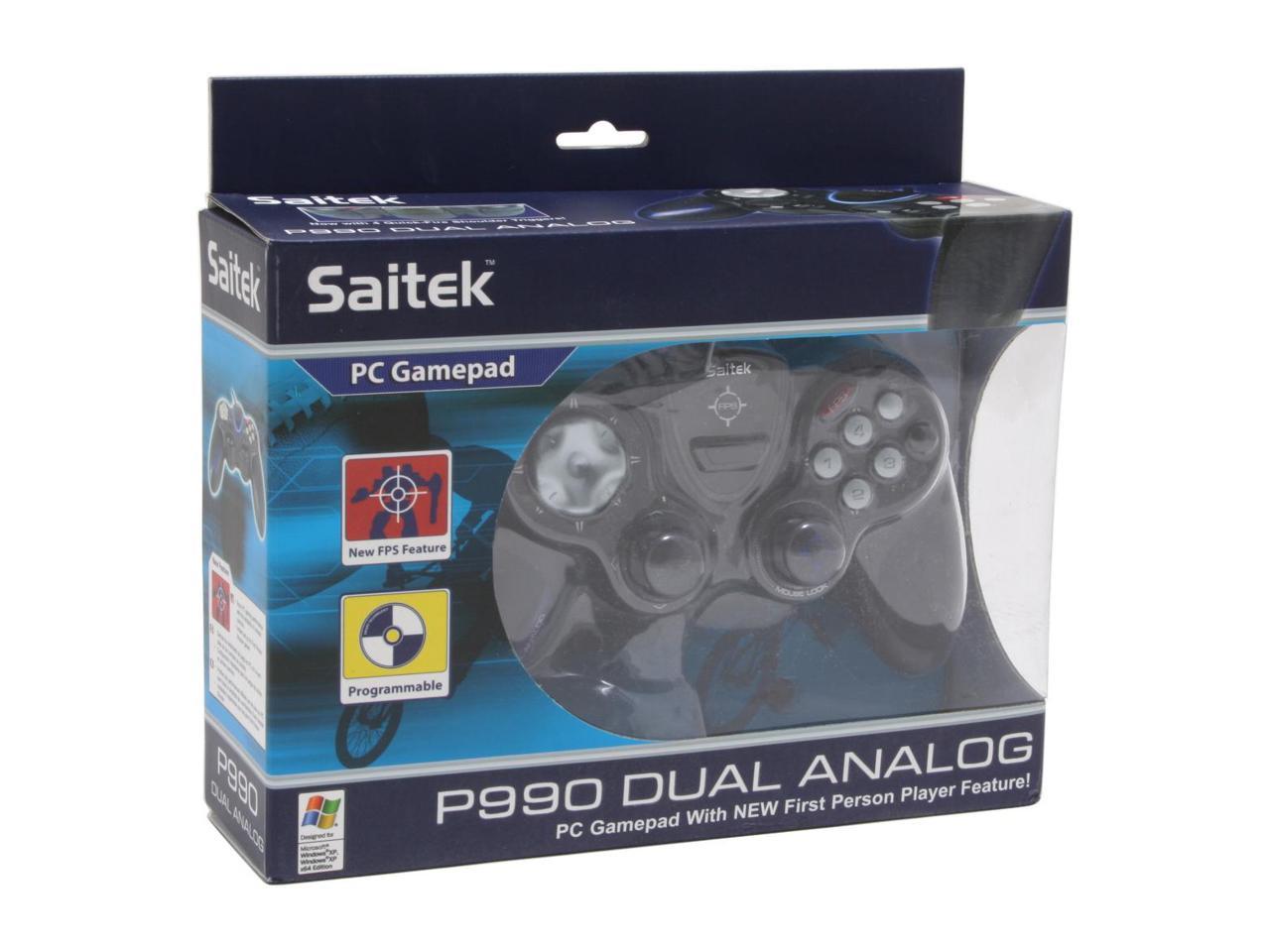 (54) Write a Review
OUT OF STOCK.
Overview
Specs
Reviews
The P990 dual analog pad from Saitek gives you more features than your standard gamepad. Instead of the usual 8 buttons you get 12. This is especially helpful when you’re playing first person shooters. The FPS button automatically maps the buttons to the most common keyboard commands in today’s games. Buttons 9 and 10 are next to buttons 1-4, and buttons 11 and 12 are activated by pressing the joysticks.
The P990 isn’t limited to first person shooters though. The Saitek Smart Technology software lets you program the pad’s buttons with any keyboard or mouse command so you never have to take your hands off the pad breaking your concentration.

Learn more about the Saitek P990

Pros: Comfortable for the most part. Works well with Vista

Cons: D-Pad design is a little hard on the thumb. Trigger buttons would have been nice but its not a real complaint.

Overall Review: First new controller I have bought in years. Kept getting burned with refurbished ones just to save a buck. Used it with H.A.W.X, GTA VC and GTA IV so far. I haven't used the software but from what I'm getting from the reviews I shouldn't bother.

Pros: I had this for 3 years and i really like and enjoy using it. Used on my laptop desktop even on my android device. no need to install drivers just plug and play.

Cons: Left analog sometimes can stick, no big deal at all.

Overall Review: I would buy this again.

Pros: dependable, works out of the box; very responsive controls

Overall Review: got this as a replacement for a logitech gamepad, because that one's left thumbstick actually broke; but regardless the saitek feels more durable and is better made than the logitech one

Pros: Good value. Decent button placement. Right sized. Worked with linux and my emulators with no hiccups so far.

Cons: The R2 button is a bit sticky. It tends to get "caught." However, I personally won't be playing any games that would ever get me using it, so its not a big deal.

Overall Review: I run Ubuntu and use GFCEU (the NES emulator) and ZNES. So far, its worked like a charm, totally painless. I haven't used it with any MAME version yet or other emulators, but I really wanted ZNES up and going and its been good.

Pros: I have been an avid PS gamer for 10+ years, so as I'm transitioning to PC gaming I just can't grasp a keyboard and mouse for FPS. Got this for an attempt of seeing if there was a decent way to game before I forego controllers and learn the dark arts of 'traditional' pc gaming. Overall I'm extremely impressed. Quality controller, and a definite plus is on Saitek's website they have a customizable profiler to allow reprogramming your controller to standard keyboard and mouse functions and switching between different profiles with two mouse clicks. Yes that means not having to spend hours trying to re-configure all your games to recognize the controller, and since the profiler can be configured so the system can't tell the difference between the controller and keyboard or mouse all your favorite legacy apps run without a hitch. (I have it setup to run ORIGINAL Quake!!!) Or you could use it to browse the web, if you have nothing better to do. Plus you get two more buttons!!

Cons: Slightly larger and shifted button placement from a PS remote. I'm sure they had to do this because of copyright/patent jazz. Not going to be too hard to adjust but just to note, it is bigger than a PS remote. The analog sticks do have a different feel, seem every bit as responsive but not as springy so you can easily overwork the analog until you get used to having less resitance. I didn't knock an egg because I'm still impressed but just noting for everyone else that it is different.

Overall Review: For $20 a worthwhile buy, I may at some point figure out how to connect a PS3 remote, but at this time it seems sketchy how to get that working and I didn't feel like dropping that kinda of money until I get into PC gaming more. But right now I'm so happy I'm just going to leave well enough alone.

Pros: Great for playing n64/sega roms on the computer. seems pretty sturdy. i have played it for hours and no problems

Cons: cable is about 5 feet but still seems short

Pros: Works under Ubuntu Linux 9.04, no calibration needed, two analog sticks that were easy to play with (even with flight simulators), plenty of buttons.

Cons: Took a while to figure out that "analog" button swaps the joypad with the left analog stick (no way to control this via software). Joypad sometimes gets stuck (problematic with action games). No instruction manual.

Overall Review: I am not a hard core gamer, I basically got this because I got a new Linux comp and needed a controller that would play most games and control certain apps.

Overall Review: Got mine in, shrinkwrap was opened, controller was scratched, this is a christmas gift, so i cant ship it back to newegg and make it back in time for christmas.