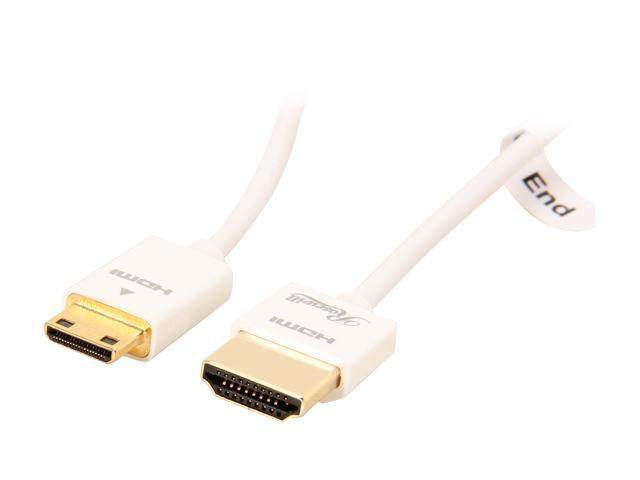 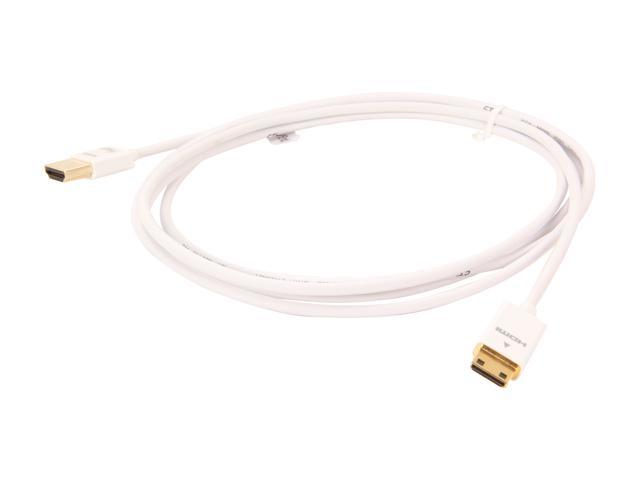 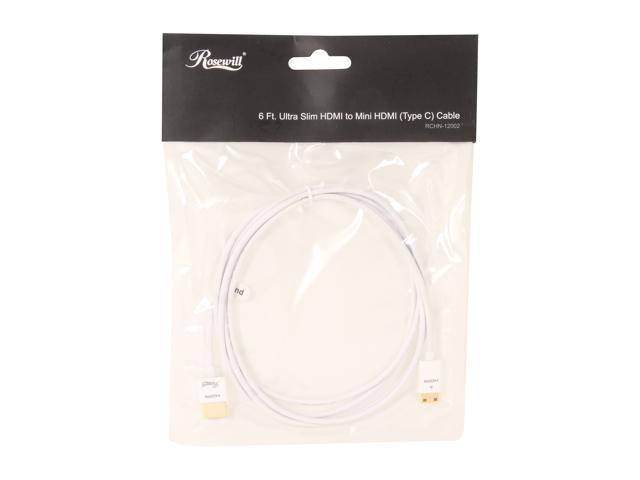 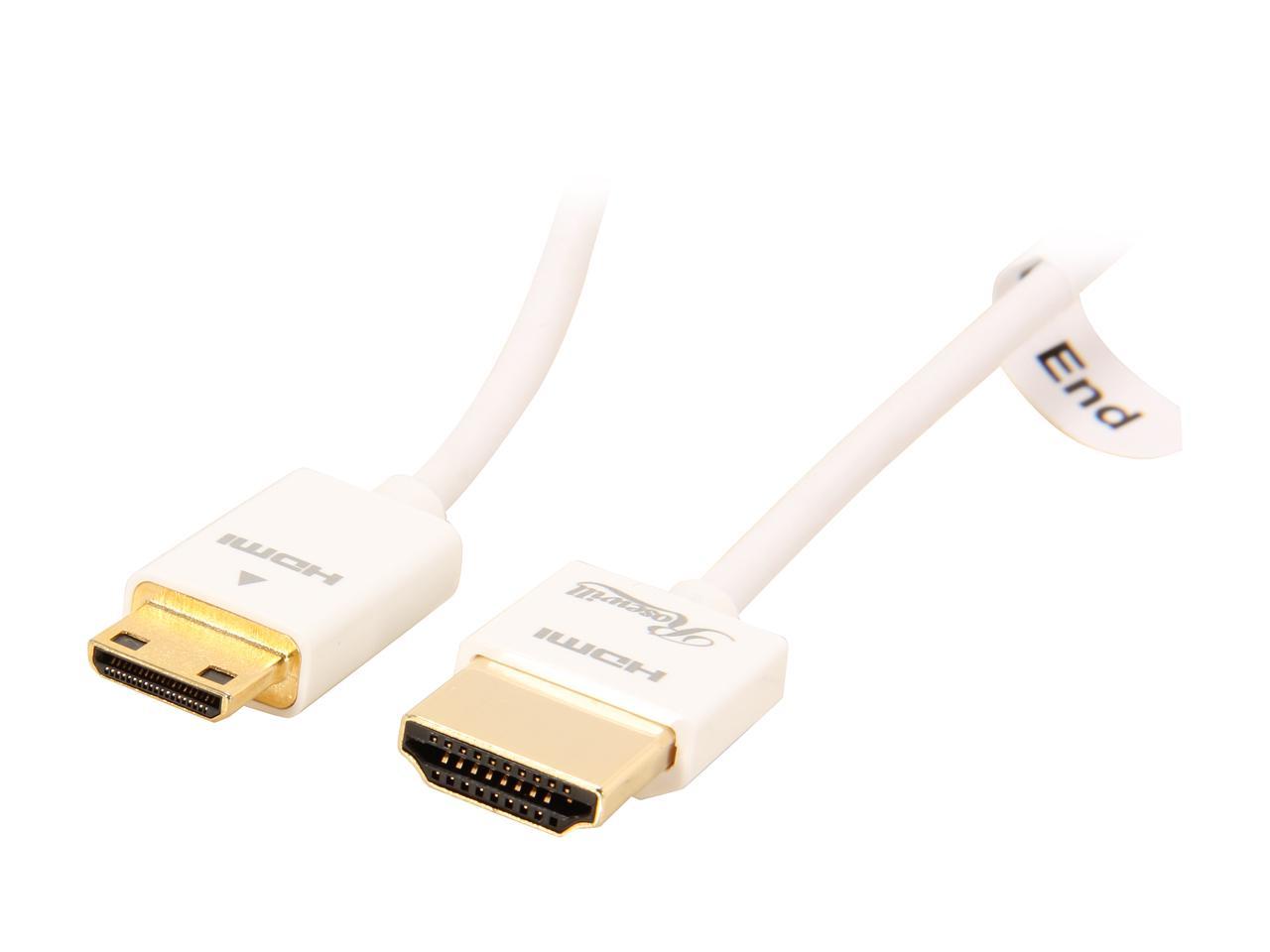 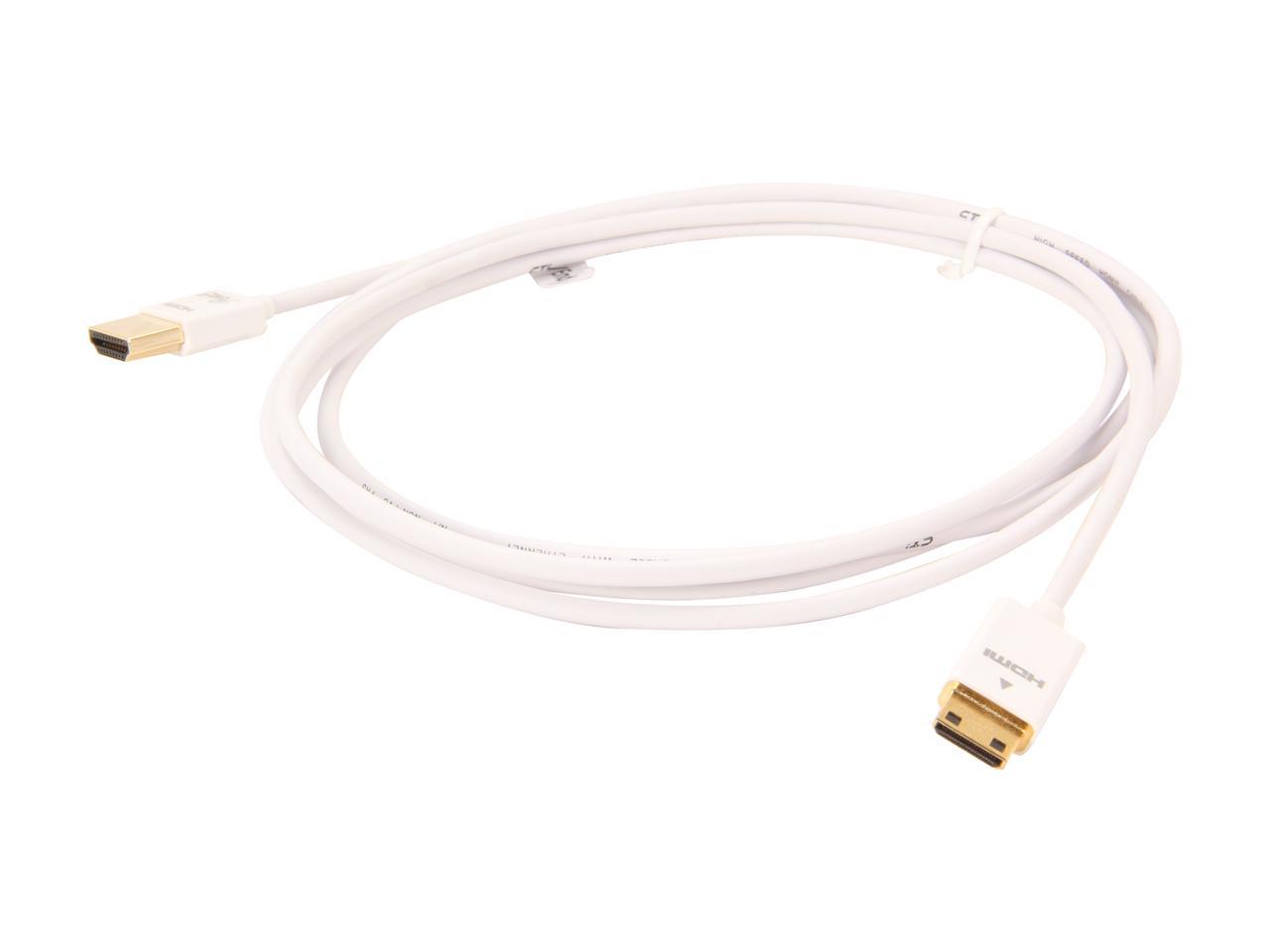 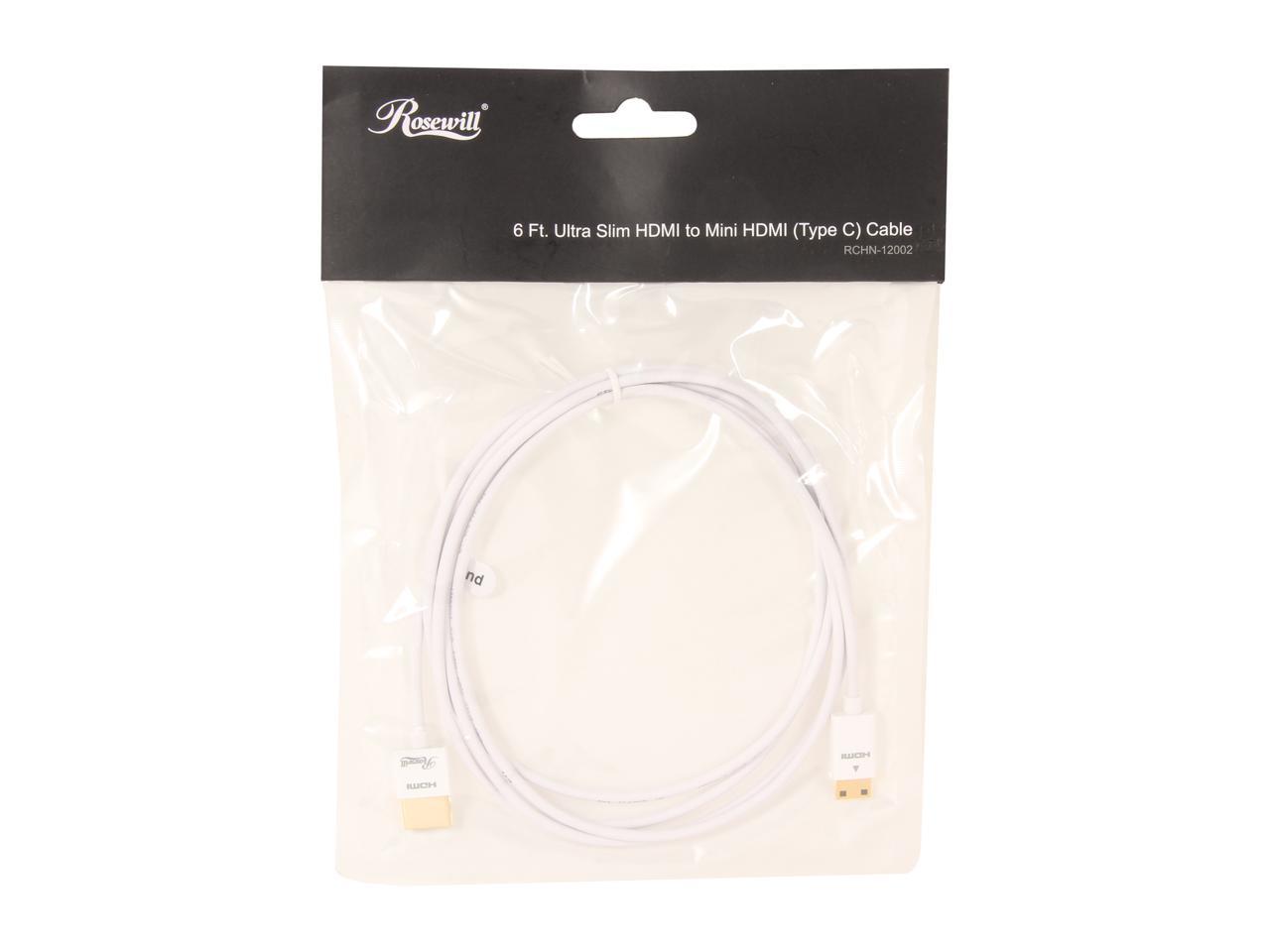 A High Speed HDMI® Cable with RedMere® is the best way to transmit your High Speed HDMI signals over the longest distances, while using the thinnest cables possible!

RedMere technology is a breakthrough in the functionality and efficiency of HDMI cables. High Speed HDMI Cables with RedMere can reliably distribute High Speed signals to much greater distances, up to 65 feet (20 meters) at the full 10.2 Gbps data throughput, as opposed to the 25 foot distance for HDMI cables without RedMere technology. This can be done with thinner and lighter cables, which are easier to handle and route through your home theater system and which put less stress on your equipment's HDMI ports.

Note that HDMI Cables with RedMere are directional. One end must be connected to the source device (e.g., Bluray™ player) and the other end to the sink/display (e.g., HDTV). Hooking them up backwards will not damage anything, they just won't transmit a signal.

HDMI Cables with RedMere include several features that separate them from other cables with RedMere. The connector heads are fully shielded with zinc alloy, which helps prevent RFI and EMI from interfering with your HDMI signal. They also have the highest rated pull force of all HDMI Cables with RedMere, which means you won't accidentally pull the cable head off by tugging on the cable instead of the connector. The tooled polycarbonate connector heads are the smallest HDMI connectors available, which means they can fit in tight spaces, such as on an Xbox 360 Slim with an analog audio cable installed. They also present a cleaner and neater appearance than ordinary injection molded connector heads. Finally, the Thermoplastic Elastomer (TPE) jacket is able to withstand more abuse than ordinary ABS or PVC jackets, which means your cable will last much longer in a heavy use environment than otherwise. Learn more about the Rosewill RCHN-12002

Pros: Love the slim style of this HDMI cable. I have it connected from my HTPC and graphics card with Mini HDMI to my HDMI receiver. It works perfectly and I don't need an adapter for my graphics card. The cable is very high quality, it reminds me of Apple quality cabling. Very portable.

Cons: Cable length is typcial at 6 feet, but prefer 9-12 due to the home theater set up I have.

Overall Review: Highly recommended. I also tried this on my laptop to HDMI monitor and it worked perfectly as well. Can't go wrong with this cable.

Pros: This cable is being used as a connection between my TV and my Acer Netbook. I was a bit concerned at first because Acer has a tendency of changing out the wire pattern of their cables to accommodate their own products. However to my surprise it worked right out of the box (bag actually). I had more problems with selecting input on my Samsung Plasma then I did with the cable install.

Cons: My only problem with this cable is the length. I realize that it is a true 6' cable but a 10' cable would have given more maneuverability and would allow a better connect without fear of unplugging it by accident. But that is no downfall to the cable itself. Just my personal preference.

Overall Review: Only other comments I have is that Rosewell has turned out a lot of quality cables as of late. And the price is hard to beat when they stand up to the test. And for those who care, they even have gold tips, not that that makes any difference in the grand scheme of things unless you are using them outdoors and have a great chance or corrosion.

Pros: The cable has gold plated ends and is super thin for easy cable management. I got this just in time because our Cat chewed up my HDMI to Mini HDMI cable that we use to watch movies on our laptop to our TV. I tested this on my laptop and Sony HDR-CX100 video camera and the picture quality was excellent. The 6' cable is plenty of length for most applications and is more than enough for any HD TV.

Cons: It's not cat proof

Overall Review: I really like the white color of the cord as well as the cord being ultra thin. It's about the same thickness of an Ipod cable and is easy to roll up the excess for a clean look.

Cons: I thought it was a normal size hdmi to hdmi cable . I needed to pick up an adapter to use it.

Overall Review: I am an eggpert reviewer . New egg asked if I would review this item.. I have the same cable from another company in a longer length so I said yes thinking it was standard hdmi on moth ends. I should go back to read the email but here is the bottom line this tech works as well as a heavy duty hi - end cable. I have this in 10 ft and 15 ft length size and now in a 6 foot. yeah the 10 ft and 15ft are just standard to standard and this is standard to mini. but all have the same quality. I tested with a mac mini to a sony tv with 3 different hd 7970 cards to the same sony. picture and sound were fine. Remember I had to use a mini hdmi to standard hdmi adapter so I have one more thing that might go wrong. Well it worked you can see by the other reviewers that there piece of gear worked. So if you want these slim rose will cables with red mere tech buy them they work. My standard to standard work and this size a to size c works in my case with the adapter. Just make sure you get the correct fit . I will buy these again when I need more cables.

Pros: Gold plated ends, Ethernet over HDMI, small cable factor, small ends for tight fits, streams full HD movies from camera to TV with absolutely no issue. This is one well thought out cable (something I never thought I'd be saying).

Cons: None so far, but will follow up if they come.

Overall Review: Used for my Canon EOS Rebel t3i and works superbly. Love that the cable isn't big and bulky. Everything about this cable is compact including the ends. Hey there's even a sticker to tell you which end goes in the TV lol.

Pros: I use it with my Canon PowerShot SX280 HS, that has a mini-HDMI port. The other end I plug into my Flat screen to view photos and videos from various occasions. Personally I love the 6ft. length cause I can sit on the couch and still control what I see on the TV via the camera controls.

Overall Review: Sometimes a Cable is just a cable, until you plug it into something :)

Pros: Nice slim ends fit in tight spots. Well made, nice gold plated ends.. Material looks good; has a nice white finish. The cable is thin, and flexible; goes where I want it to go without hassle. Easily handled all that I could throw at it, and the price was good; a very good value. You don't have to pay $40 for a top quality cable. Rosewill products have made me happy for years, and this is another winner.

Cons: None as/of yet. Will follow up if I run into any issues down the road.

Overall Review: Not a whole lot can go wrong with an HDMI cable. I've had issues with other cables that the ends didn't make a good tight connection and we would loose video signal. This isn't the case with this cable. I would recommend.