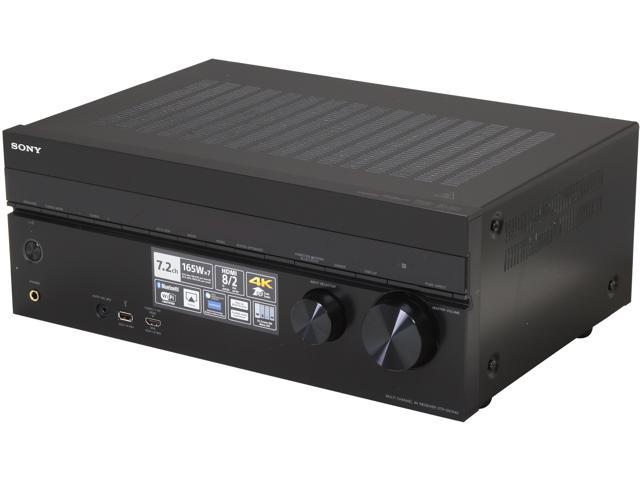 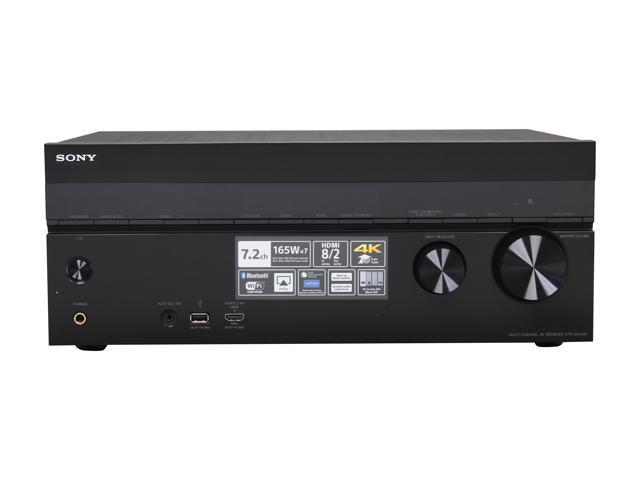 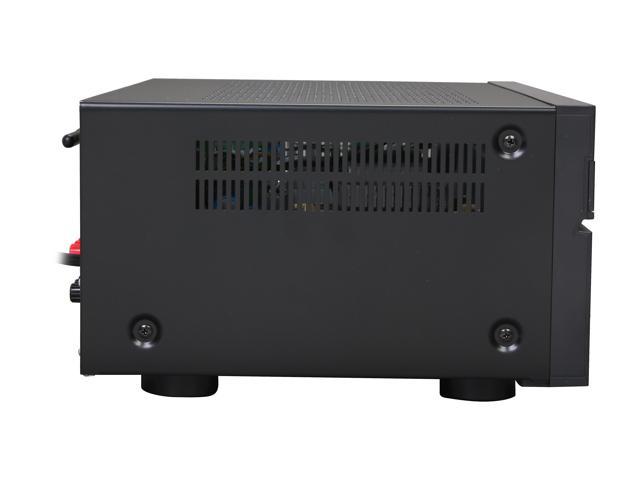 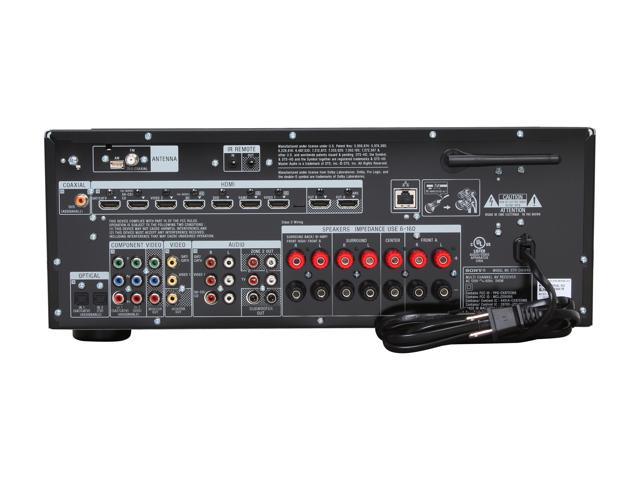 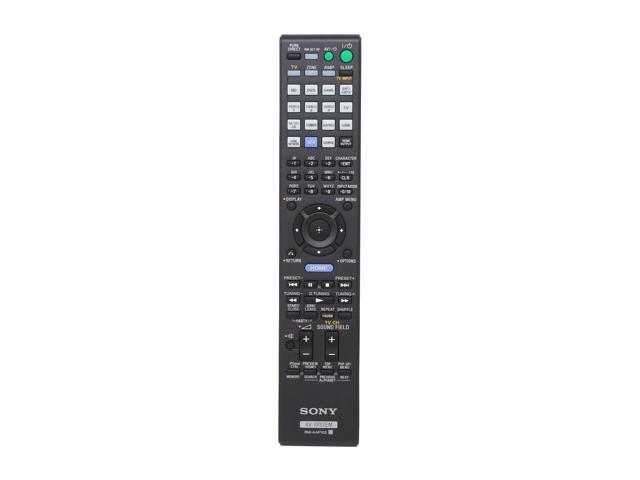 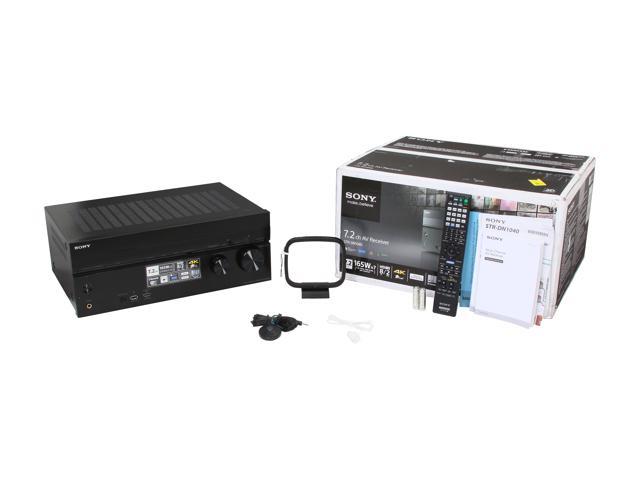 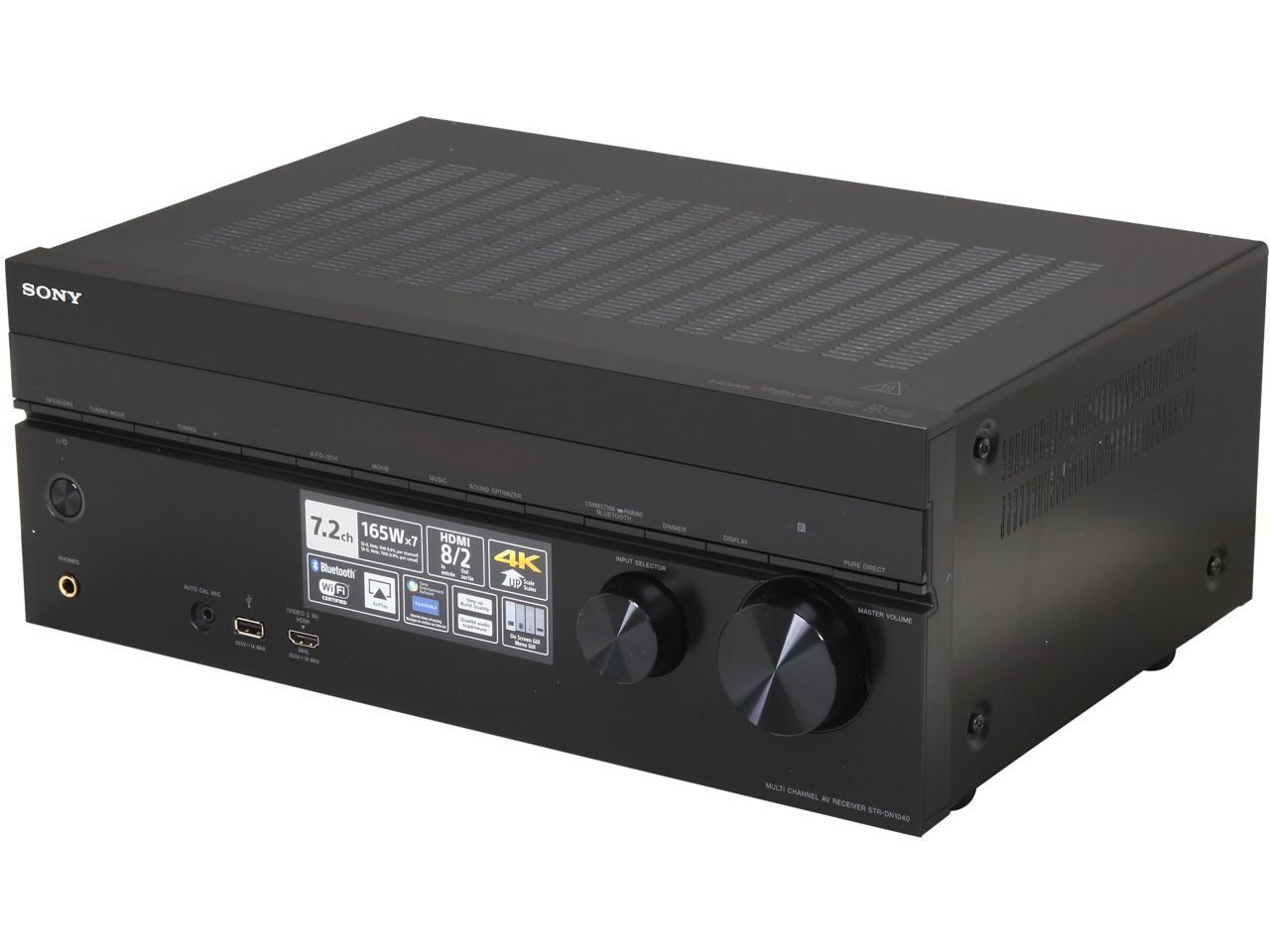 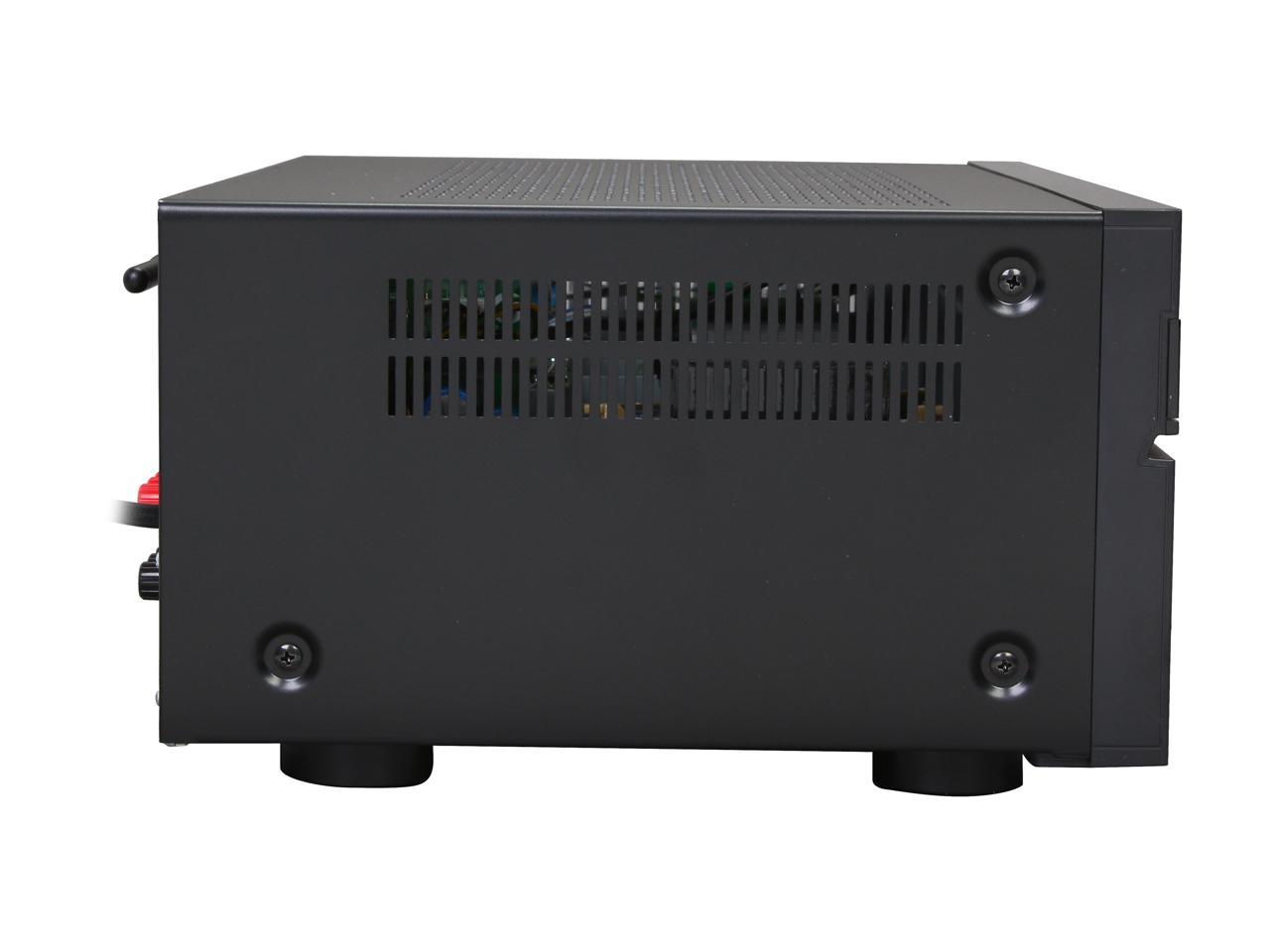 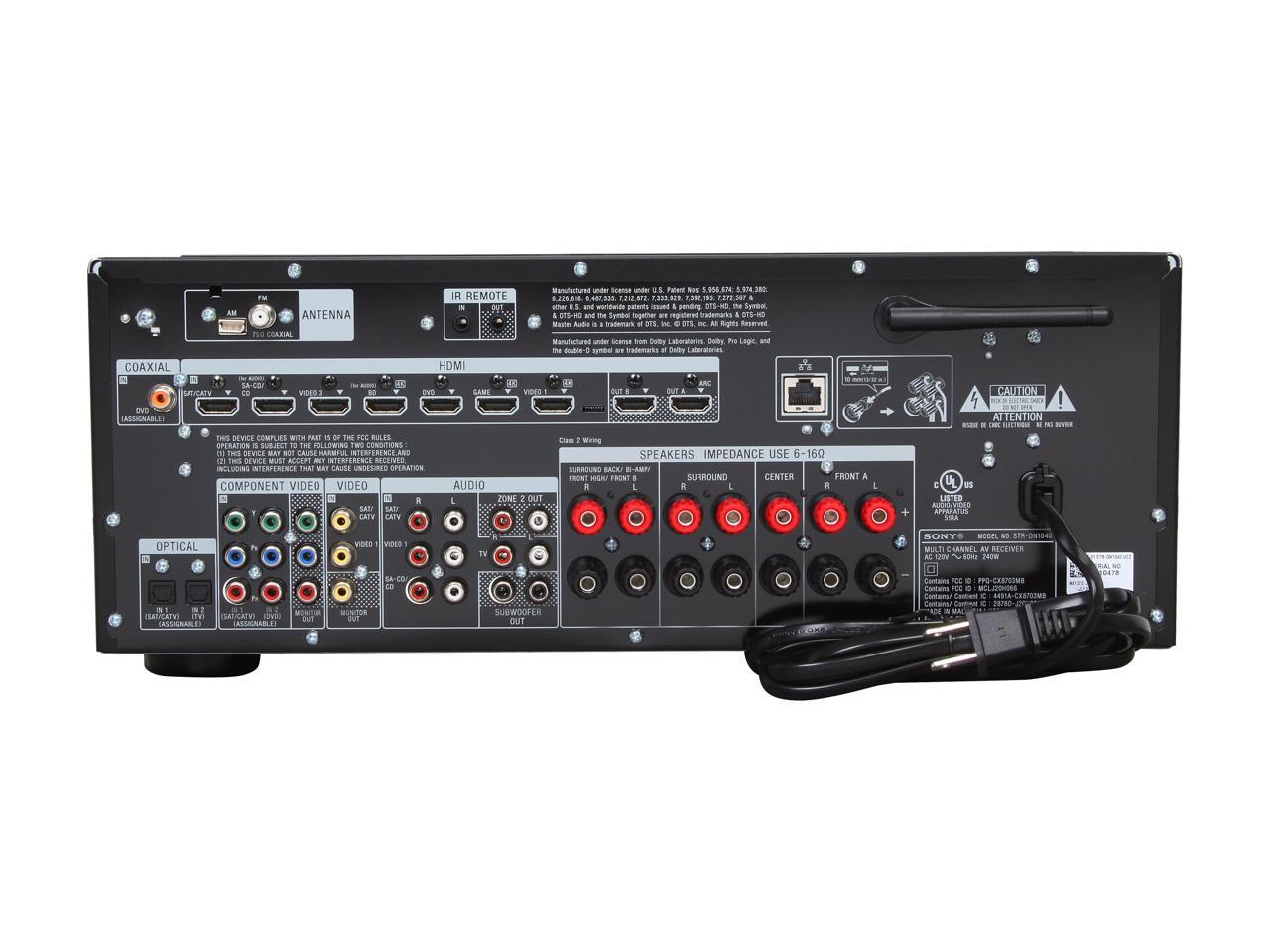 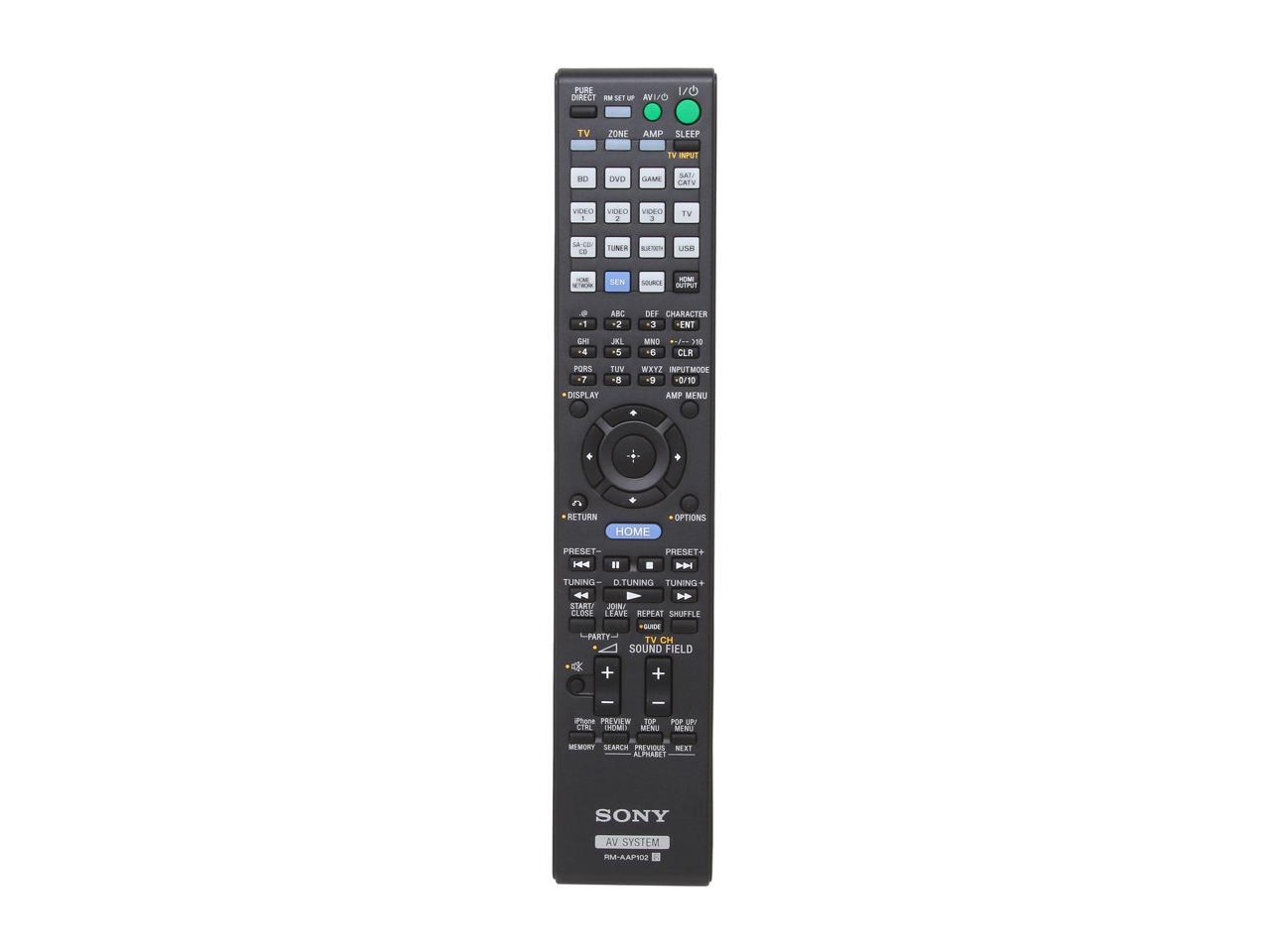 (10) Write a Review
OUT OF STOCK.
Overview
Specs
Reviews
SONY 7.2-Channel 4K Wi-Fi Network A/V Receiver
Model Number STR-DN1040
Model Features: 7.2-channel (165W x 7 @ 8 ohms 1kHz 0.9% THD 1ch. driven), built-in Wi-Fi® and Bluetooth®, 10 HD inputs (8 HDMI, 2 component), 4K pass-through and upscaling, iPod/iPhone video and music playback
Overview
Superior sound. Serious connectivity.
Listen up: 7.2 channels and 165W per channel of power, driven by the largest capacitors and transformer in its class. Sound good? The only thing better is getting all that sound to your speakers without a hitch, and with the ability to stream music with built-in Wi-Fi®, Bluetooth®, and AirPlay®. In addition to legendary Sony sound, the STR-DN1040 punches out 4K resolution pass-through and upscaling, while offering 10 HD inputs and a redesigned menu system with easy setup wizard. It's the ultimate high-resolution sound stage for your music, Blu-ray™ movies, games, and more.

Wi-Fi on board.
Now, connecting to virtually unlimited content has never been easier. The party will never stop when you can connect to the Internet and stream online music, podcasts, and more. Or tap into your home network to access music libraries on your computers, built-in music services, or via AirPlay.
Connect it all with Bluetooth.
It all comes together with the STR-DN1040 4K A/V receiver. It effortlessly streams music from your smart phone or tablet so nothing is out of reach. Now anyone can be the DJ: no wires, no problem. Bluetooth streaming can even wake the receiver from standby mode to get the party started.
Seamless AirPlay integration.
Easily access music from your iPhone®, iPod® touch, iPad®, or iTunes® along with compatible music apps like Spotify® and iHeartRadio. Simply touch the AirPlay logo when it appears, and select the STR-DN1040 to start streaming the perfect playlist to match your mood in no time.
Well connected.
The STR-DN1040 4K A/V Receiver plays well with others by sporting 10 HD inputs, while eight HDMI inputs (up to 4K capable) let you connect a Sony PlayStation3 entertainment system, Blu-ray Disc player, and six other HDMI-capable devices for high-definition video and audio. And just in case you need them, two component inputs (1080/60i capable) give you added HD-capable connectivity and versatility; you won't have to leave any of your audio behind.
Full on-screen control.
Introducing the STR-DN1040's redesigned intuitive on-screen interface. Now you can set up and control the A/V receiver with a graphical user interface that doesn't require a technician to figure out. Change inputs, adjust settings, and confirm volume levels on screen.
Built for sound.
When it comes to design inside and out, the STR-DN1040 4K A/V receiver is pure Sony. The ethos of sound quality is reflected in the design and build of the receiver. A redesigned chassis and larger transformer deliver superior sound performance and increased power, allowing you to experience every sound nuance present.
Stream away.
Because the STR-DN1040 connects wirelessly to the web, you'll never be lacking for music, podcasts, and Internet radio. Effortlessly tap into Pandora®, Music Unlimited, Slacker, and vTuner, and let the tunes stream on.
Features

Enjoy superior sound while easily steaming music with built-in Wi-Fi®, Bluetooth®, and AirPlay®. The STR-DN1040 network A/V receiver features 7.2 channels and 165W per channel of power, driven by the largest capacitors and transformer in its class; its legendary Sony sound that really connects. Additional features include 4K resolution pass-through and upscaling, 10 HD inputs and a redesigned menu system with easy setup wizard. This receiver is the ultimate high-resolution sound stage for your music, Blu-ray™ movies, games, and more.

7.2 Channels of Power
With 165W per channel, this powerhouse envelopes you in a new level of sound performance. (165W x 7 @ 8ohms 1kHz 0.9% THD with one channel driven)
Bluetooth® Built-In
Play your music out loud - stream it from your smart phone or tablet to the receiver.
New Advanced On-Screen Graphical User Interface
Set up and control the A/V receiver with a redesigned intuitive on-screen graphical user interface. Change inputs, adjust settings, and confirm volume levels on screen.
Up Convert/Upscales Video Signal to 4K via HDMI™
Improve image quality non-4K connected devices to near HD. Analog connected device signals are converted to digital and output via HDMI™, making one cable connection from the receiver to the HDMI-enabled TV possible.
iPod®/iPhone® Music and Video Playback via USB
Listen to music and watch video stored on your iPod® or iPhone® while charging your device through the receiver's front USB input.
Advanced Digital Cinema Auto Calibration - Quick Speaker Setup
Ensure you get the best sound experience from your A/V receiver and speakers. This advanced version offers auto phase matching. Simply place the included microphone where you will be seated, and the settings are automatically optimized based on the distance, delays, and placement of your speakers.
Assignable Digital Audio and Video Inputs
Get the most out of each audio and video input with the ability to reassign inputs to support connected devices.
Wi-Fi® Built-In
Get connected to the Internet and your home network to access more music than you can imagine, including music stored on your computer, music services built-in, or AirPlay®.
Network Services
Music streaming at its very best. Navigate and enjoy the latest from Pandora®, Music Unlimited, Slacker, and vTuner.
Easy Setup Wizard
Quickly set up the DN1040 with the easy-to-follow on-screen wizard. Get connected to the internet, set up your speakers, and get ready for action
HD Digital Cinema Sound and Front High Speakers
Optimize your receiver to mimic the sound characteristics of movie theaters. "Front Height" mode enables vocal height and 3D effects for better positioning of effects, giving added depth to visuals and concerts. Imagine as a helicopter comes from above and lands: you’ll hear the change in height as the effect unfolds on screen.
3D Pass-Through
Compatible with Blu-ray 3D™ movies, video games, and other 3D content.
Audio Return Channel
Eliminate the need for extra cables connected to your TV. This feature allows audio to be sent from your compatible TV to your receiver through the same HDMI™ cable already being used to send audio and video to your TV.
BRAVIA® Sync Capable (HDMI CEC)
Conveniently operate and control select Sony® BRAVIA® Sync devices with one remote including: Sony Blu-ray Disc™ Players, BRAVIA® HDTVs, Sony home theater products.
AirPlay®
Easily stream your music from your iPhone®/iPod® Touch, iPad® ,or iTunes®, along with compatible music Apps like Spotify and iHeart Radio. Simply touch the AirPlay® logo when it appears, and select the STRDN1040 to amplify your tunes.
Ten HD Inputs
Get versatile HD connection options with seven HD inputs. Eight HDMI™ inputs (up to 4K capable) let you connect a Sony® PlayStation®3 entertainment system, Blu-ray Disc™ player, any other two HDMI-capable devices for high-definition video and audio. Two component inputs (1080/60i capable) provide added HD-capable connectivity and versatility.
Sound Optimizer
No longer do you have to miss out on the dynamic sound effects in films. When you need to keep the volume low, the sound optimizer enables you to hear the smallest sound effect at low volumes. This dynamic feature gives you the best reproduction of sound effects, while keeping the intended sound stage at high- or low volume levels.
Control with Your iPhone® or Android™ Devices with Free Apps
Download the free Sony TV SideView app from the iTunes® or Google® play app stores, and use your iPhone® or Android™ devices to control volume, inputs, receiver function, and control your network music.
Advanced Blu-ray Disc™ Audio Decoding
Experience sound closer to the way it was captured with LPCM, Dolby® trueHD, ProLogic® IIz, and dts®-HD master audio codecs.
Standby Pass-Through of Audio and Video
Conveniently access all your HDMI™ connected devices without having to power on the receiver.
24p True Cinema™ (Pass-Through)
Watch Blu-ray Disc™ movies in their native frame rate (24 frames per second), when paired with a 24p HDTV and playback device like a Blu-ray Disc™ Player or PlayStation®3 gaming console via HDMI™ cable.

Learn more about the Sony STRDN1040

Customer Reviews of the Sony STRDN1040