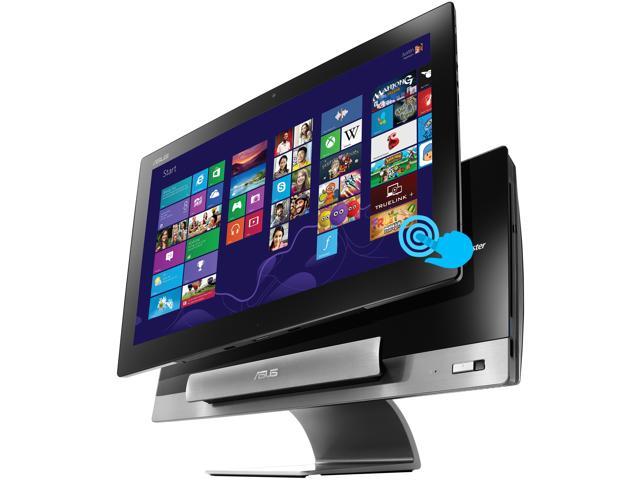 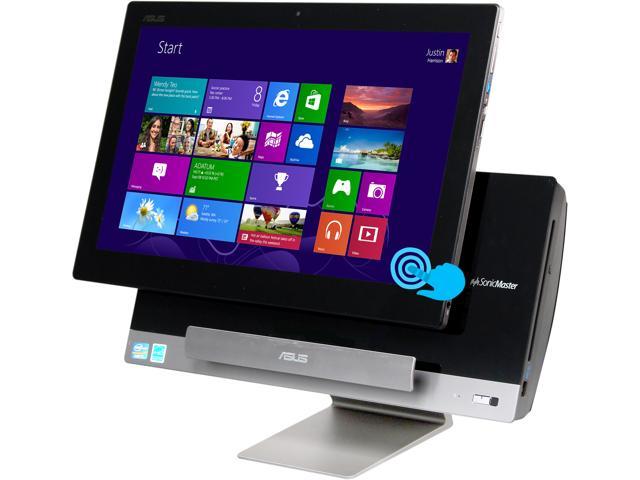 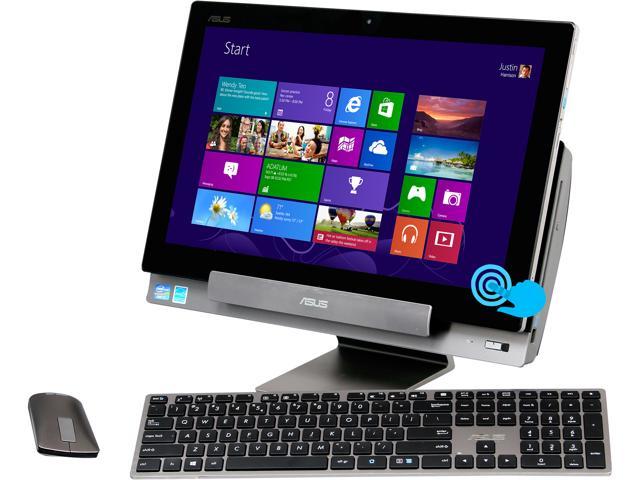 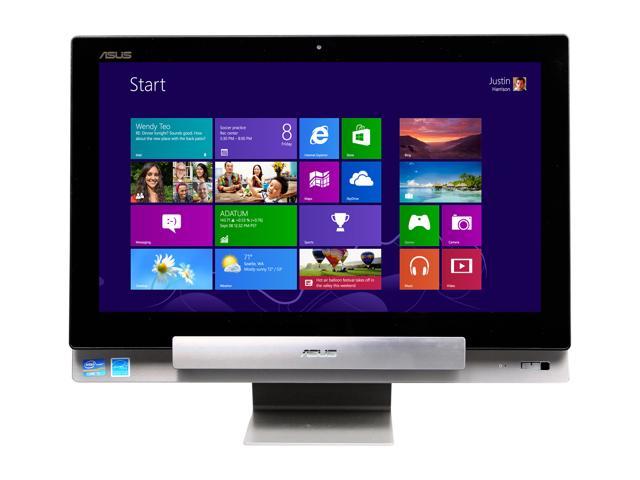 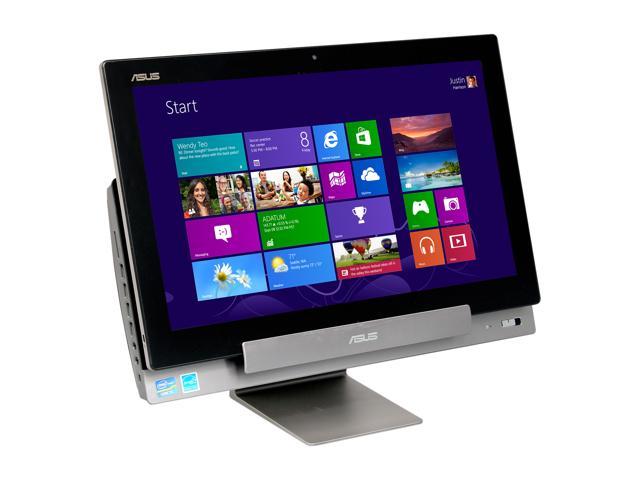 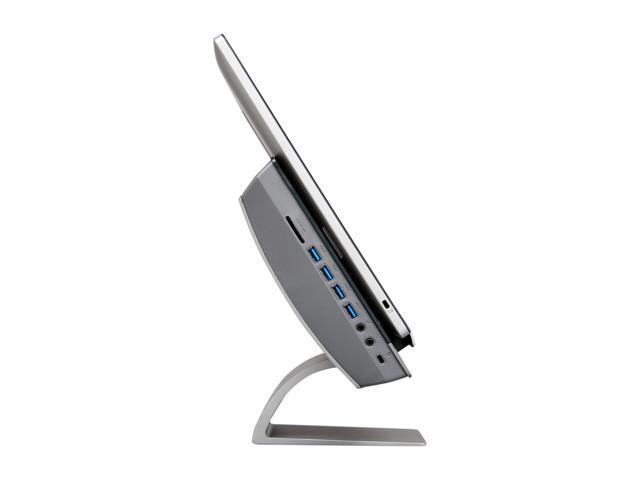 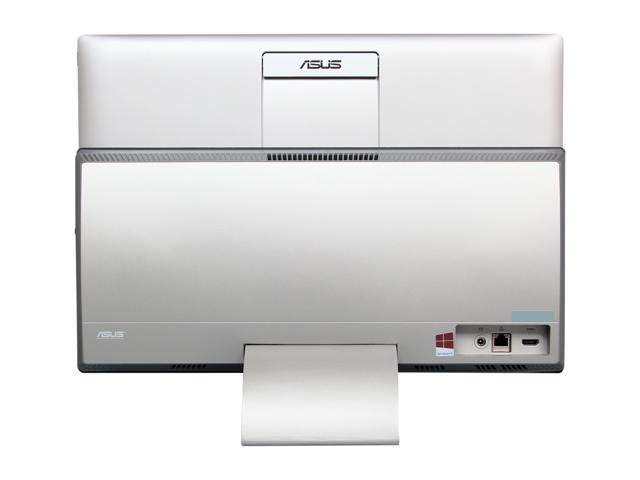 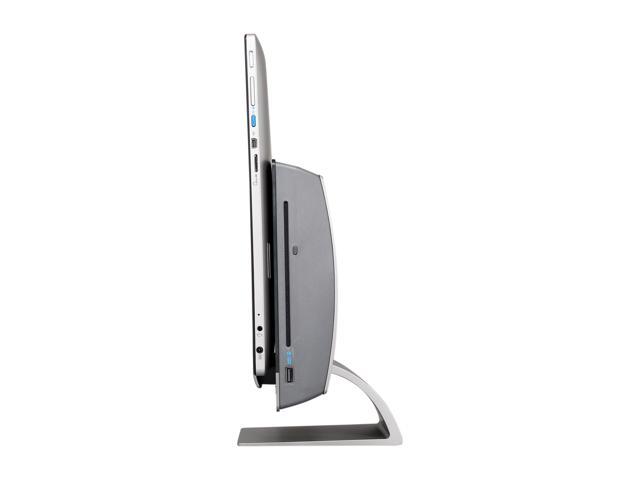 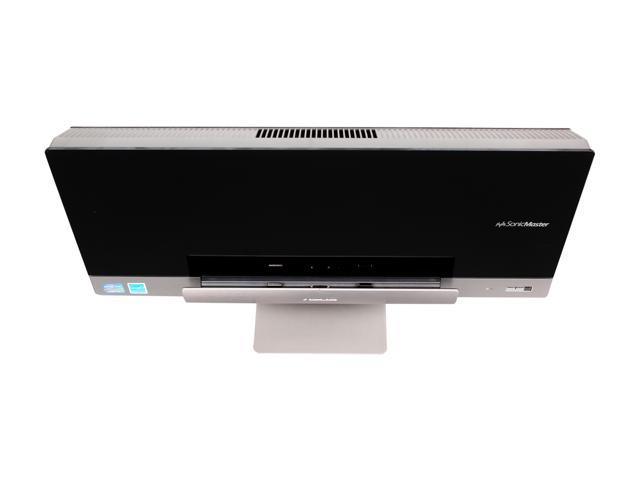 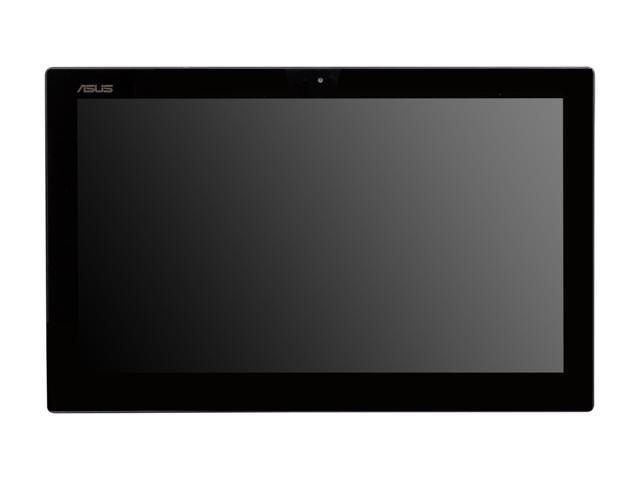 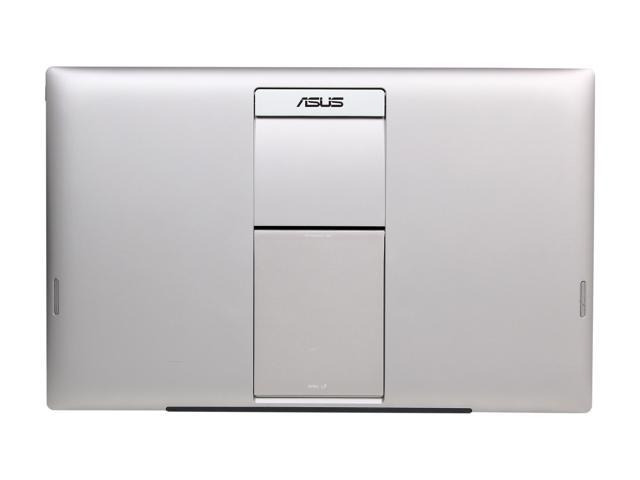 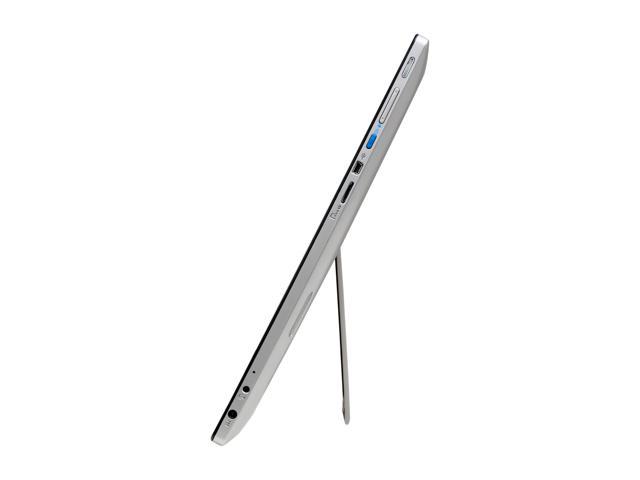 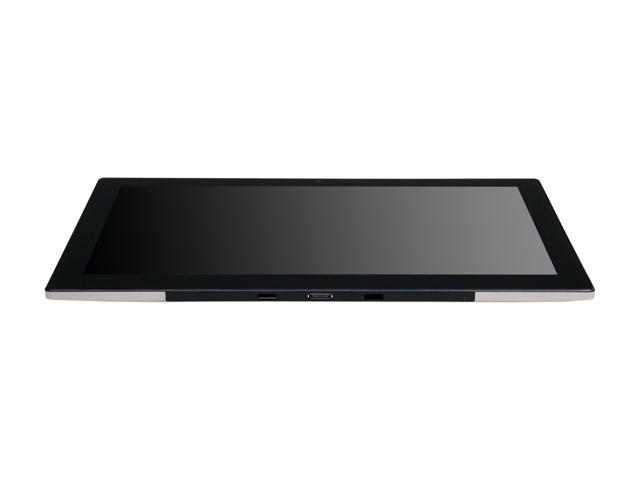 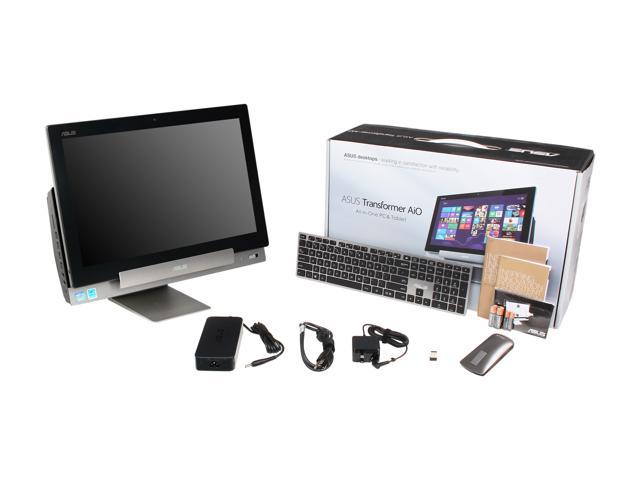 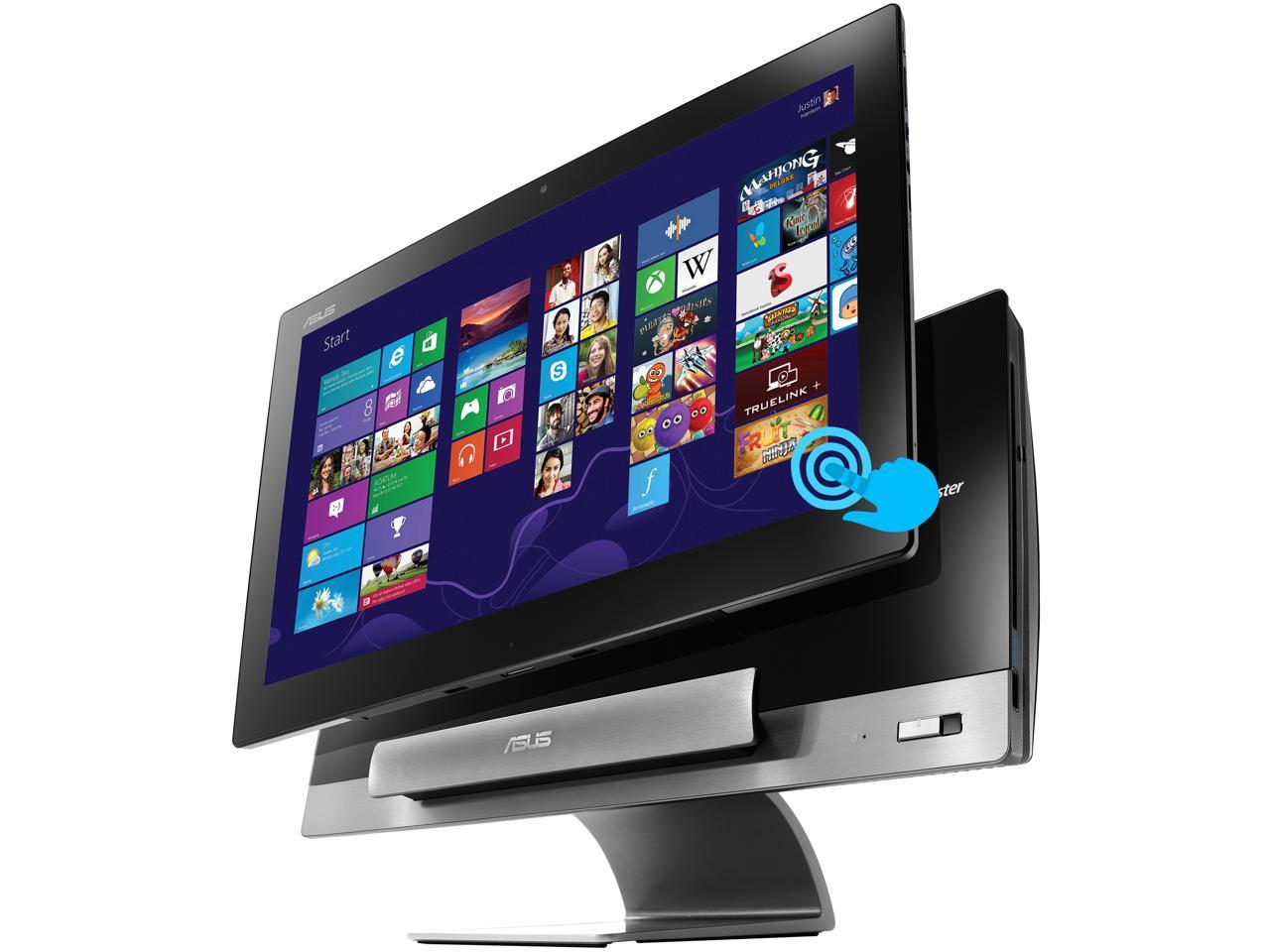 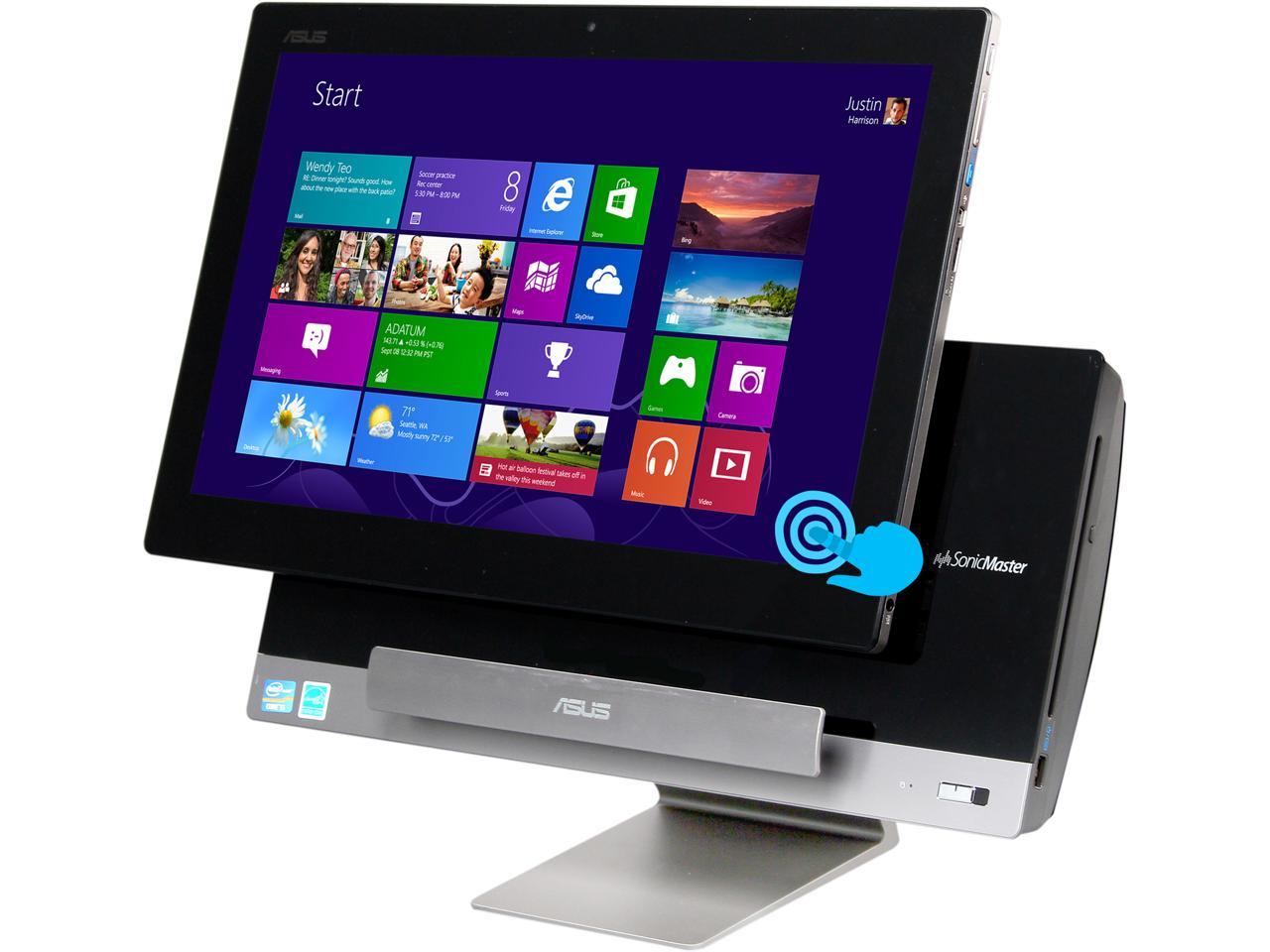 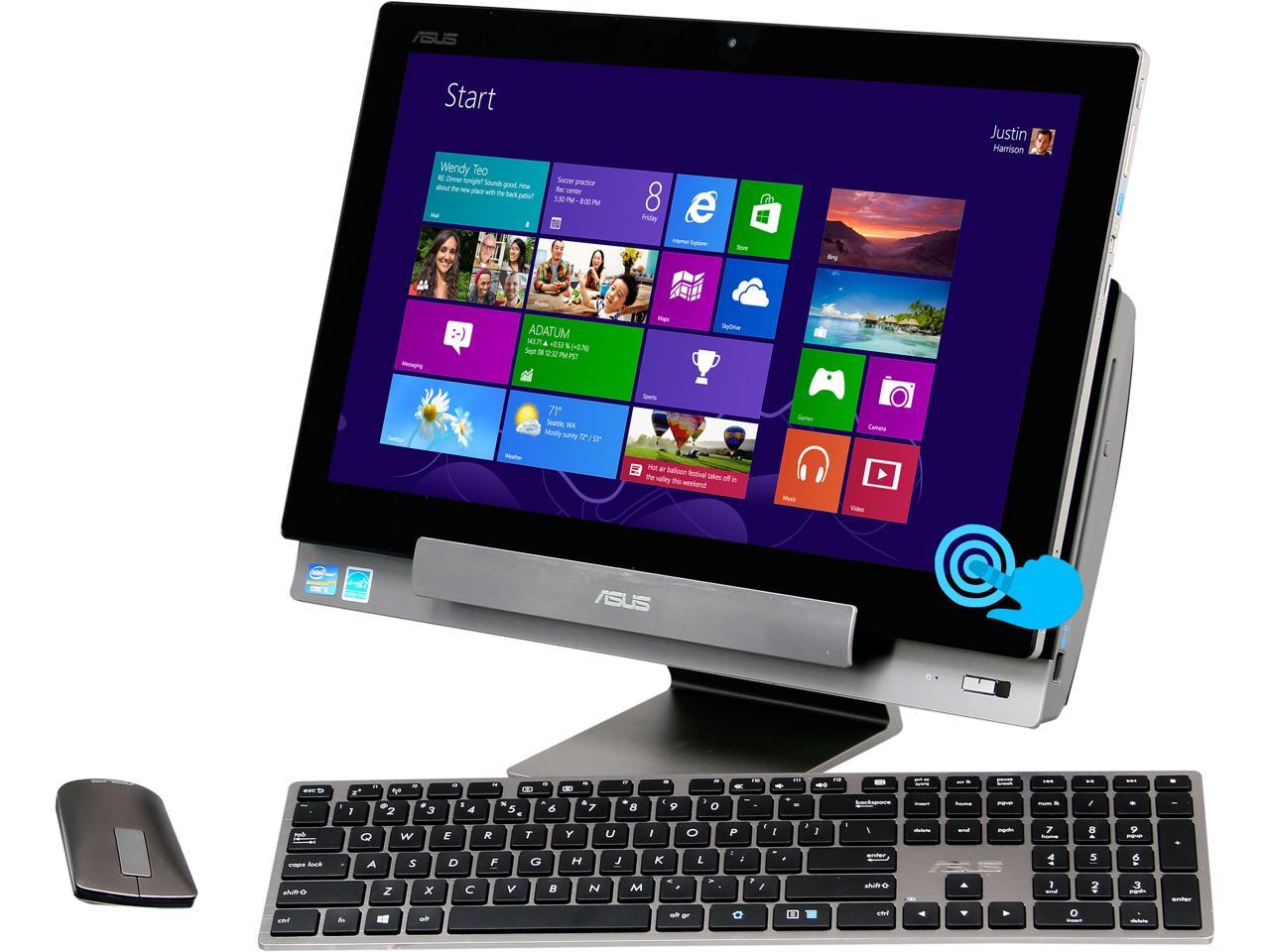 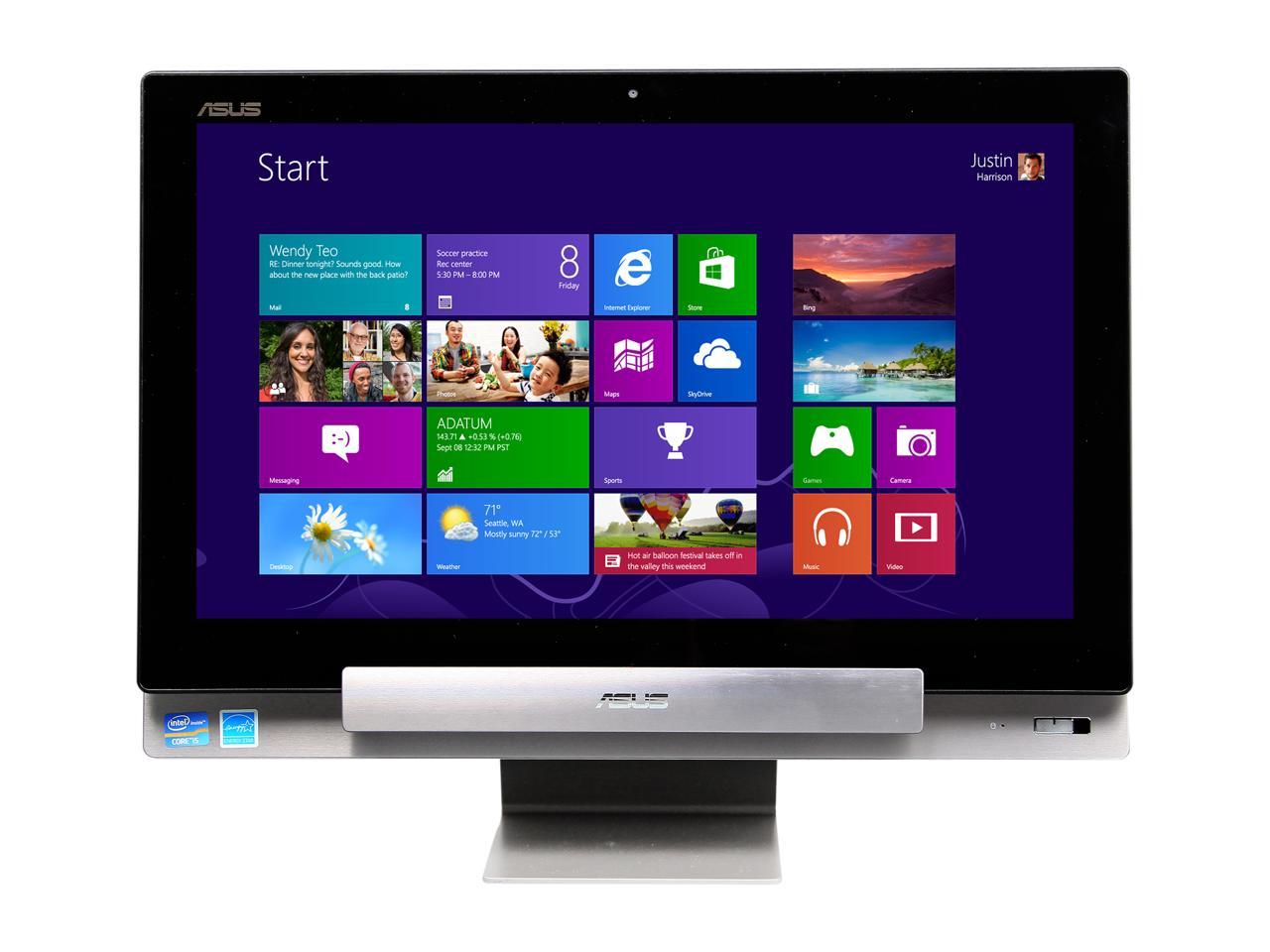 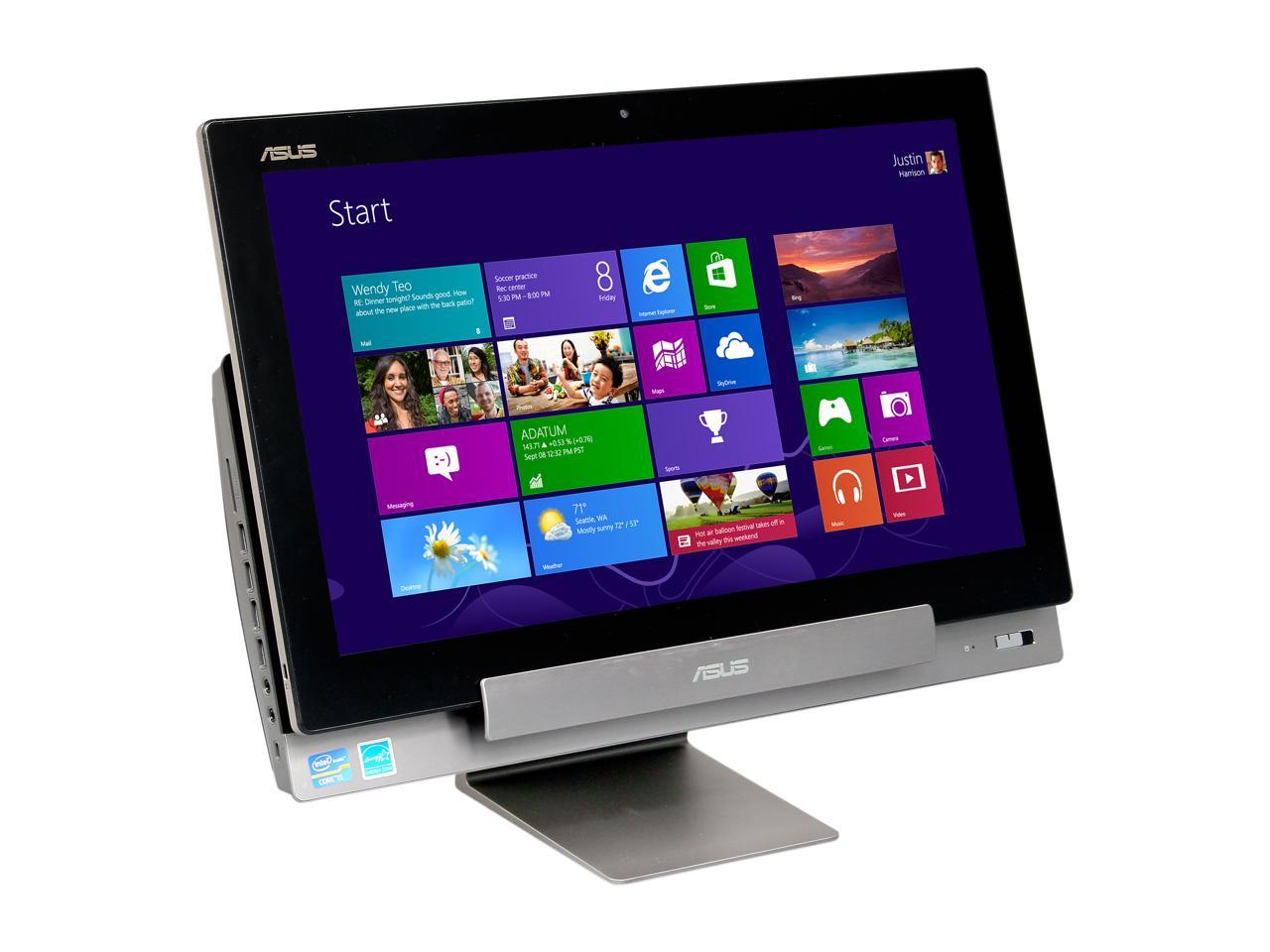 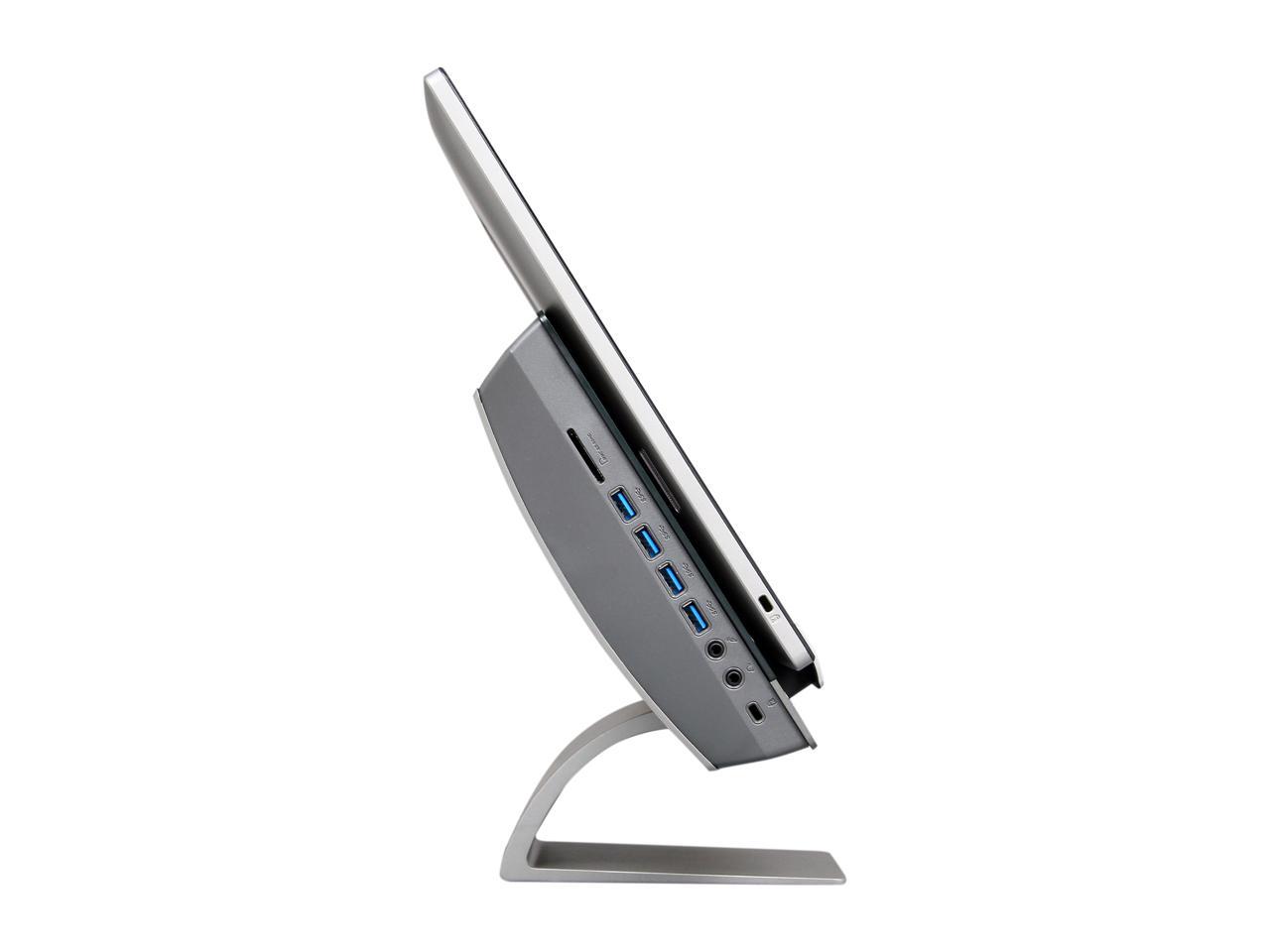 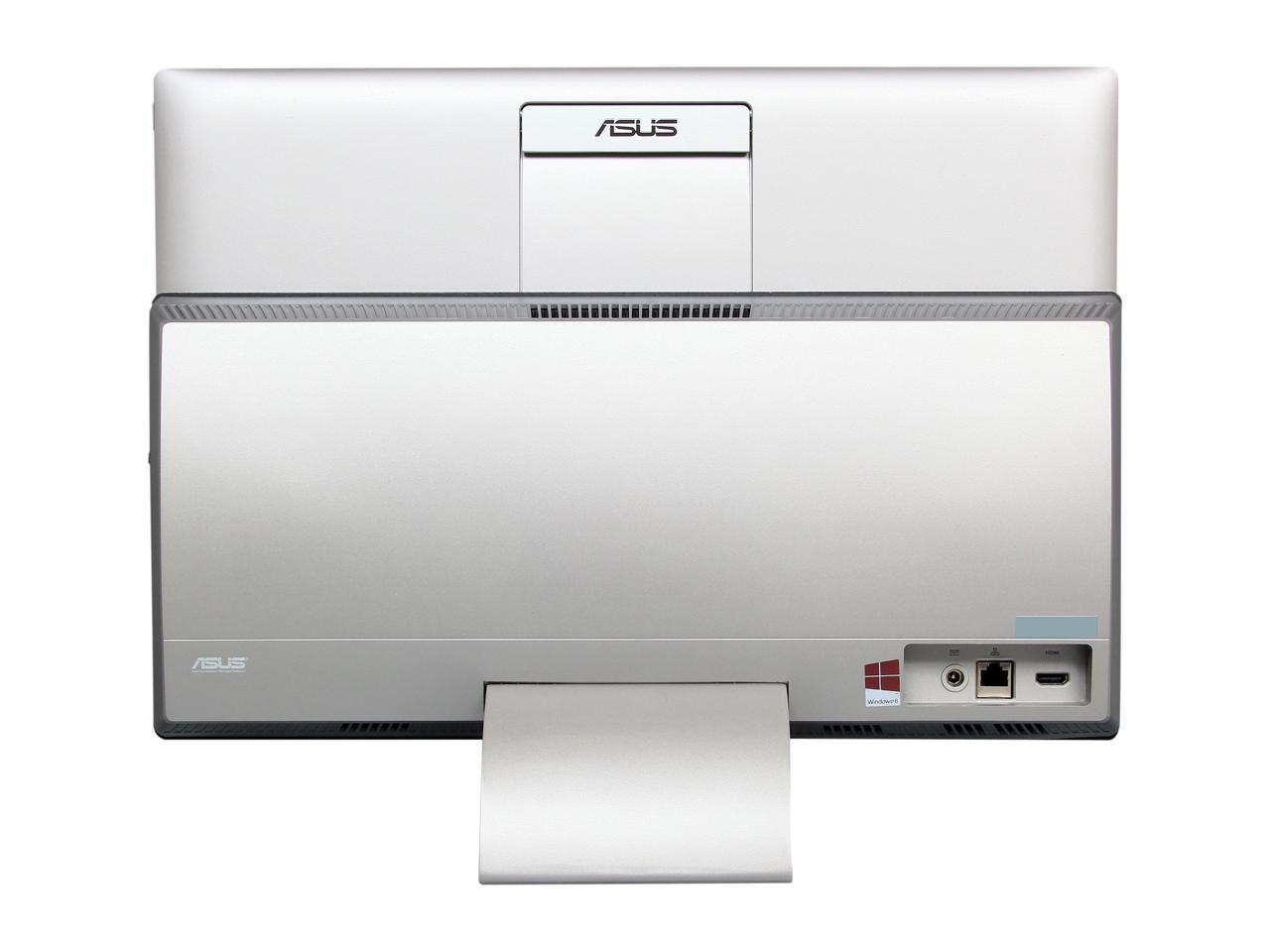 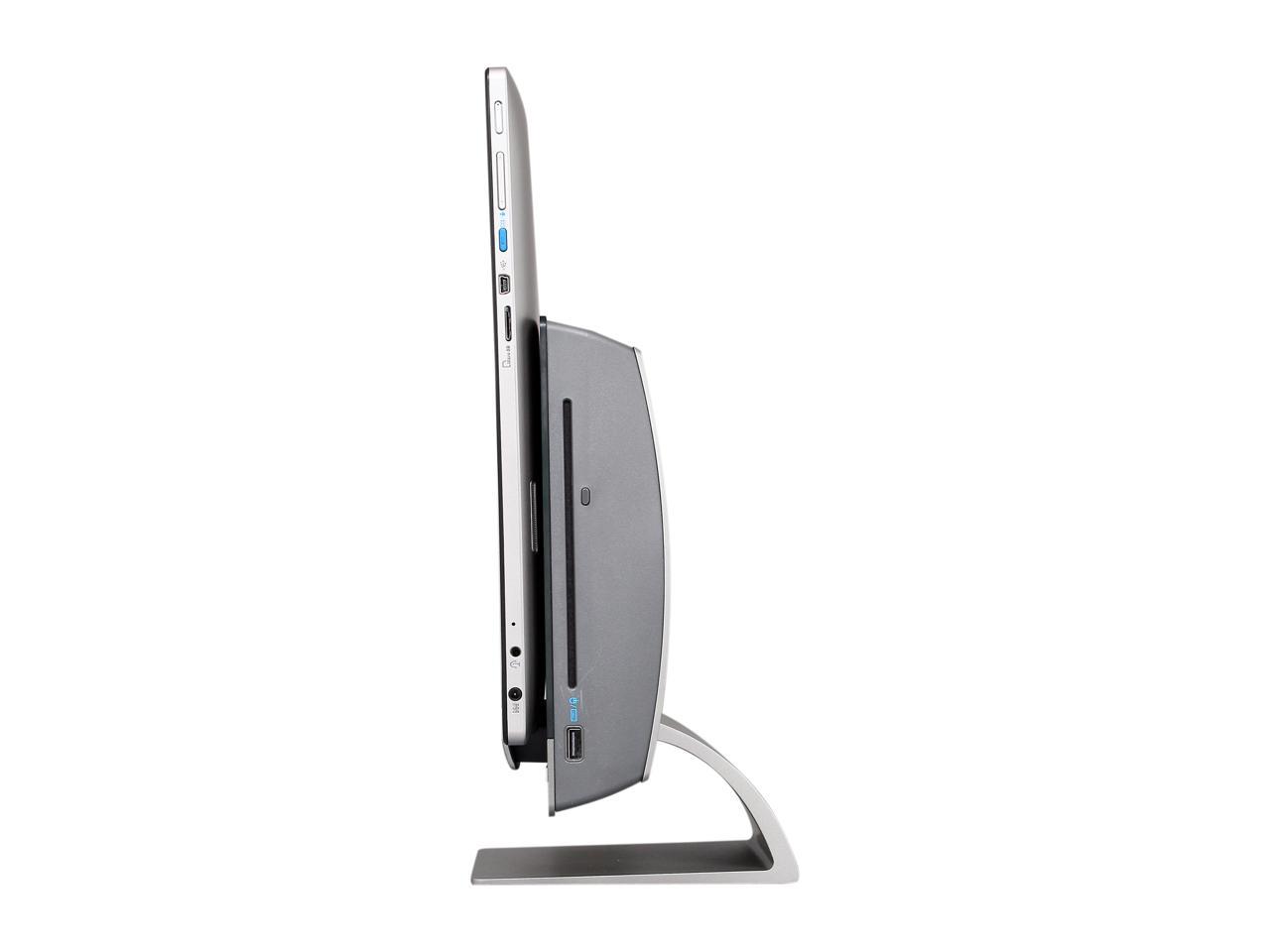 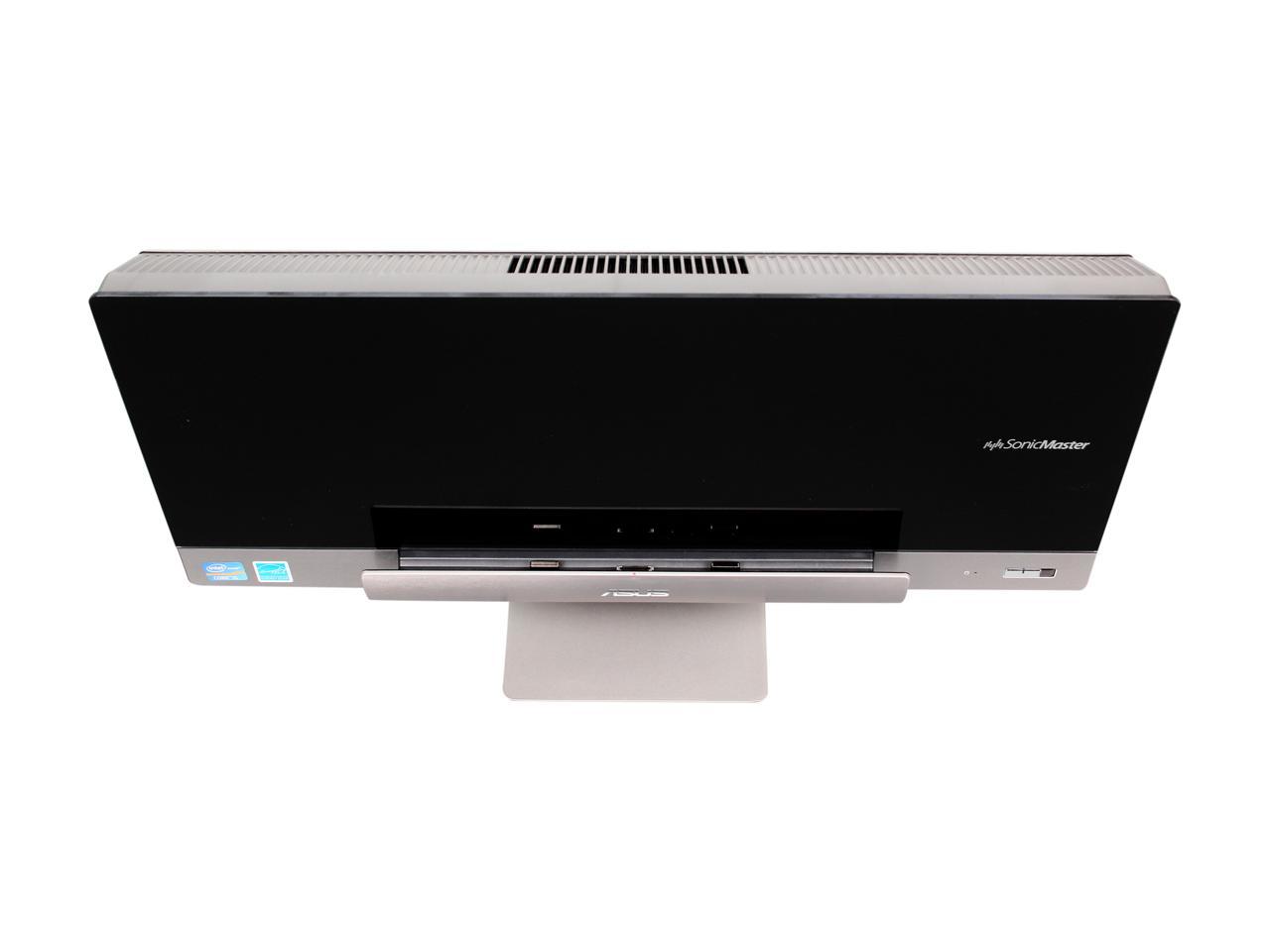 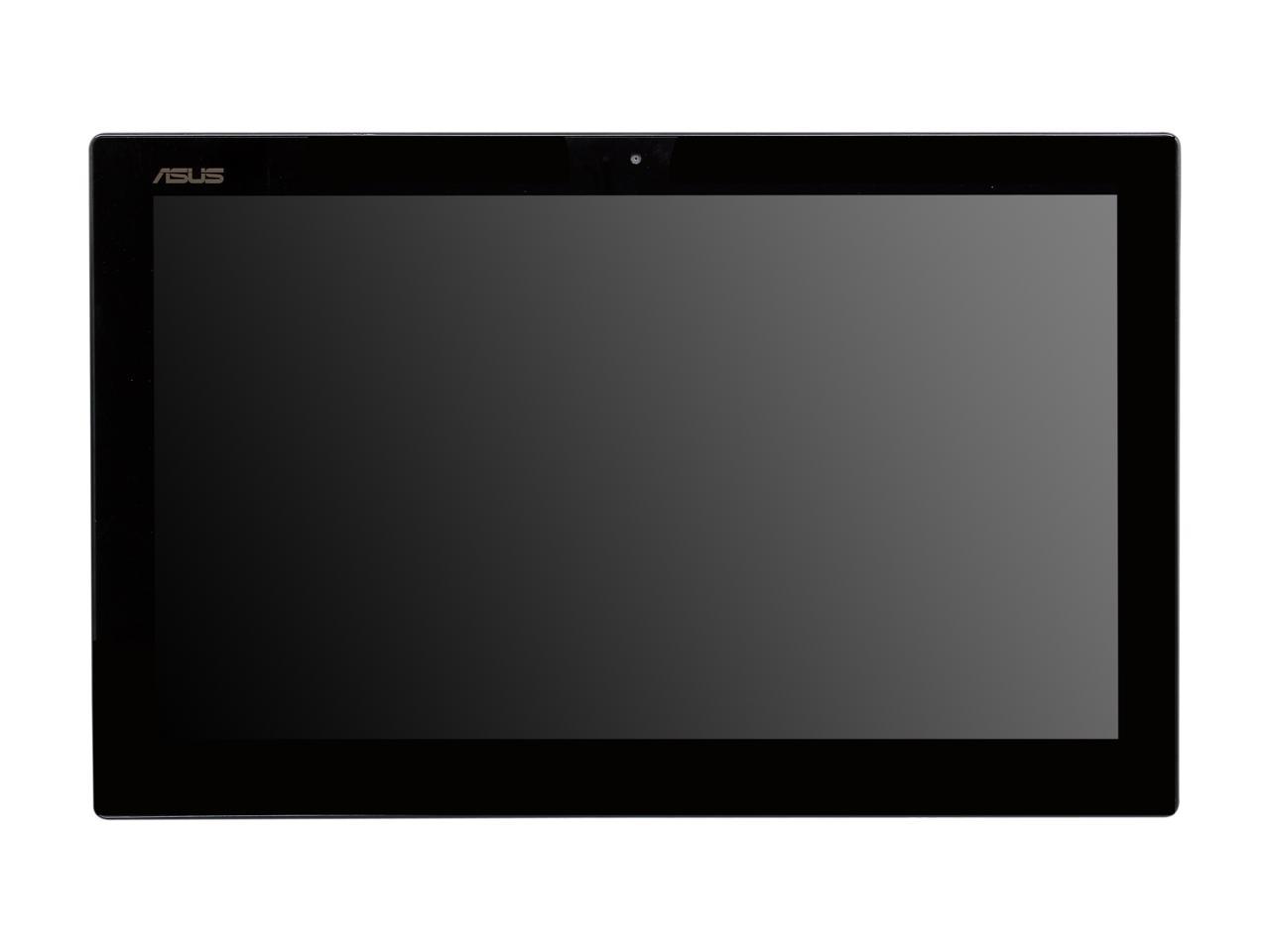 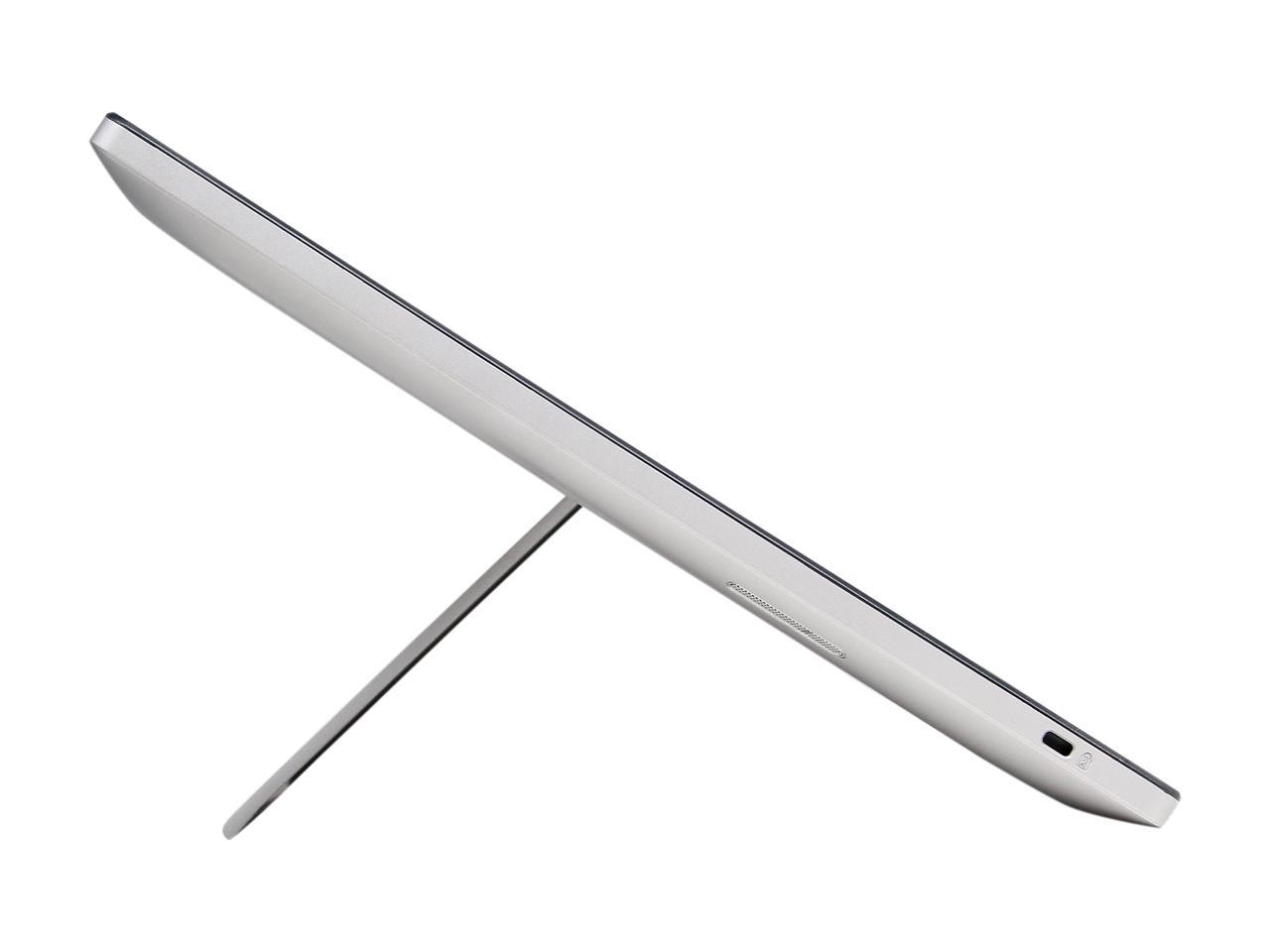 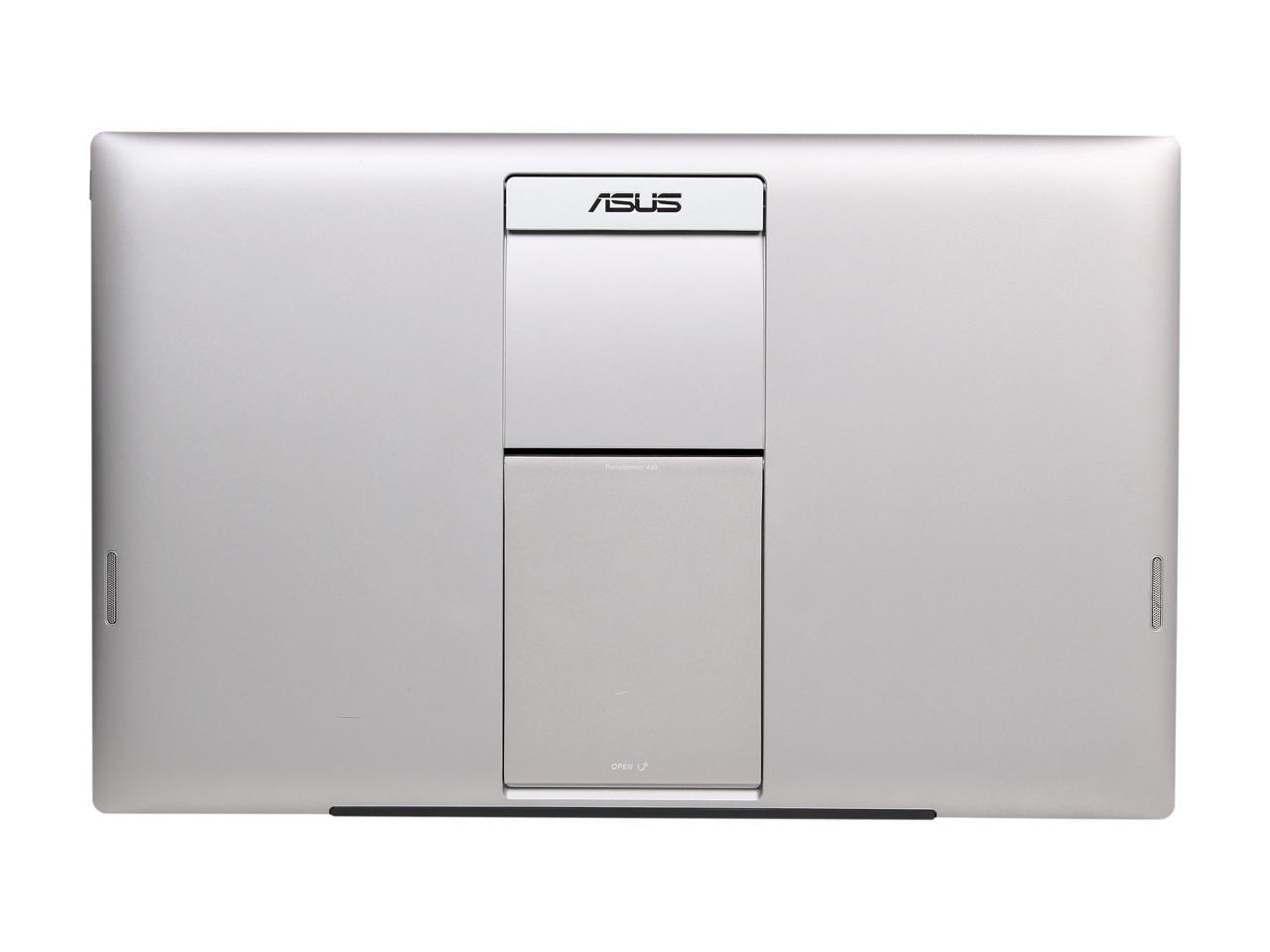 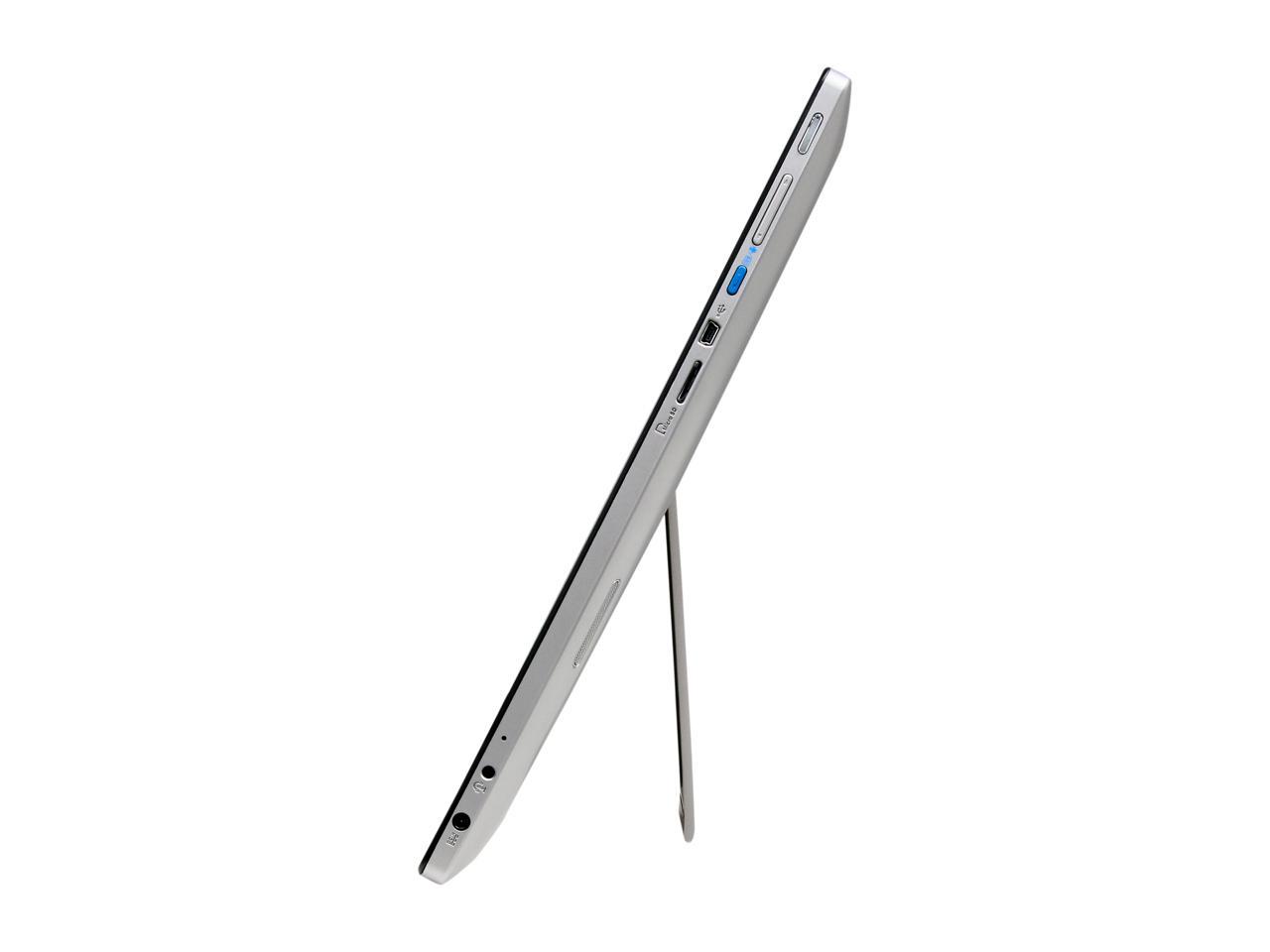 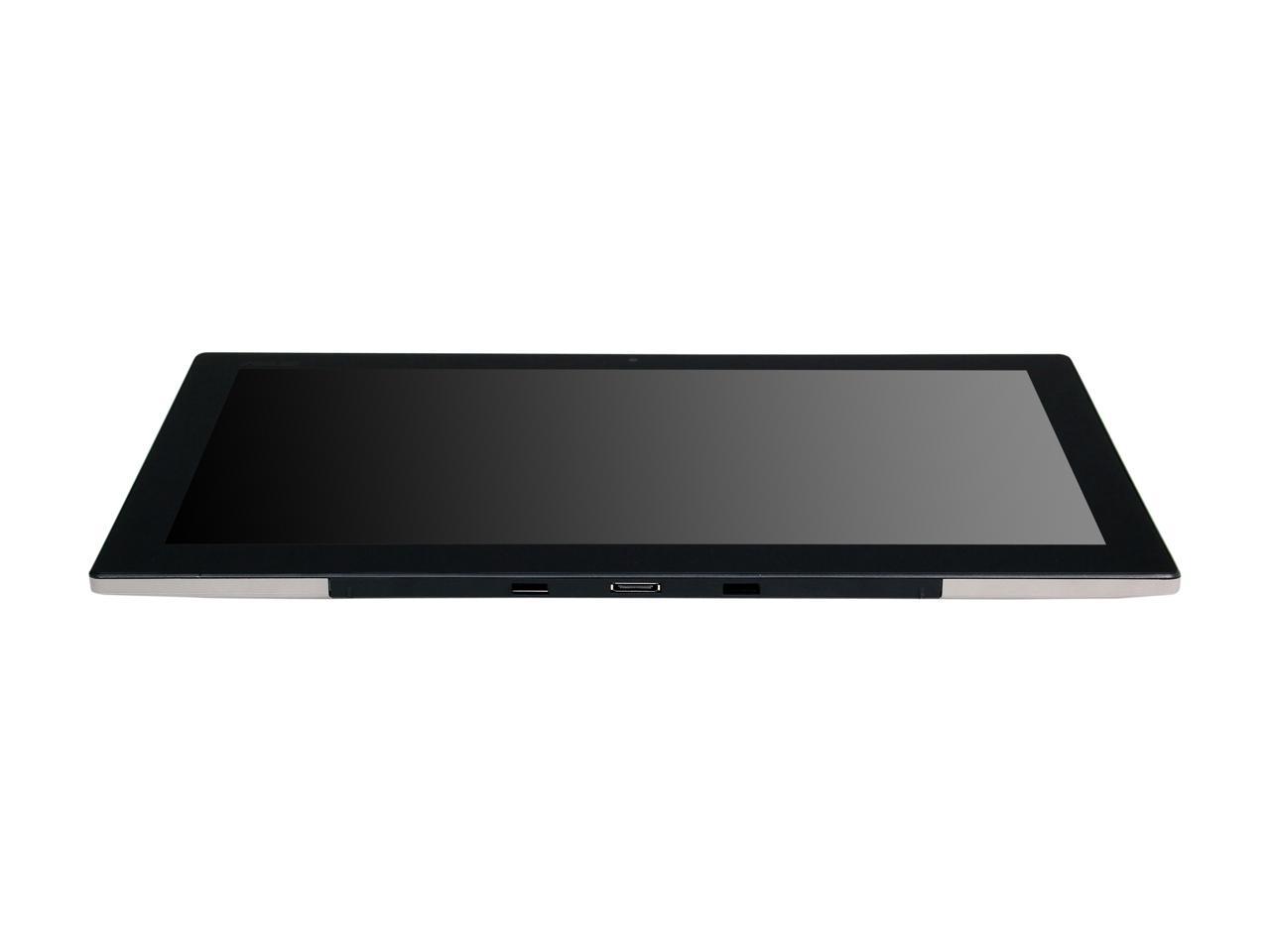 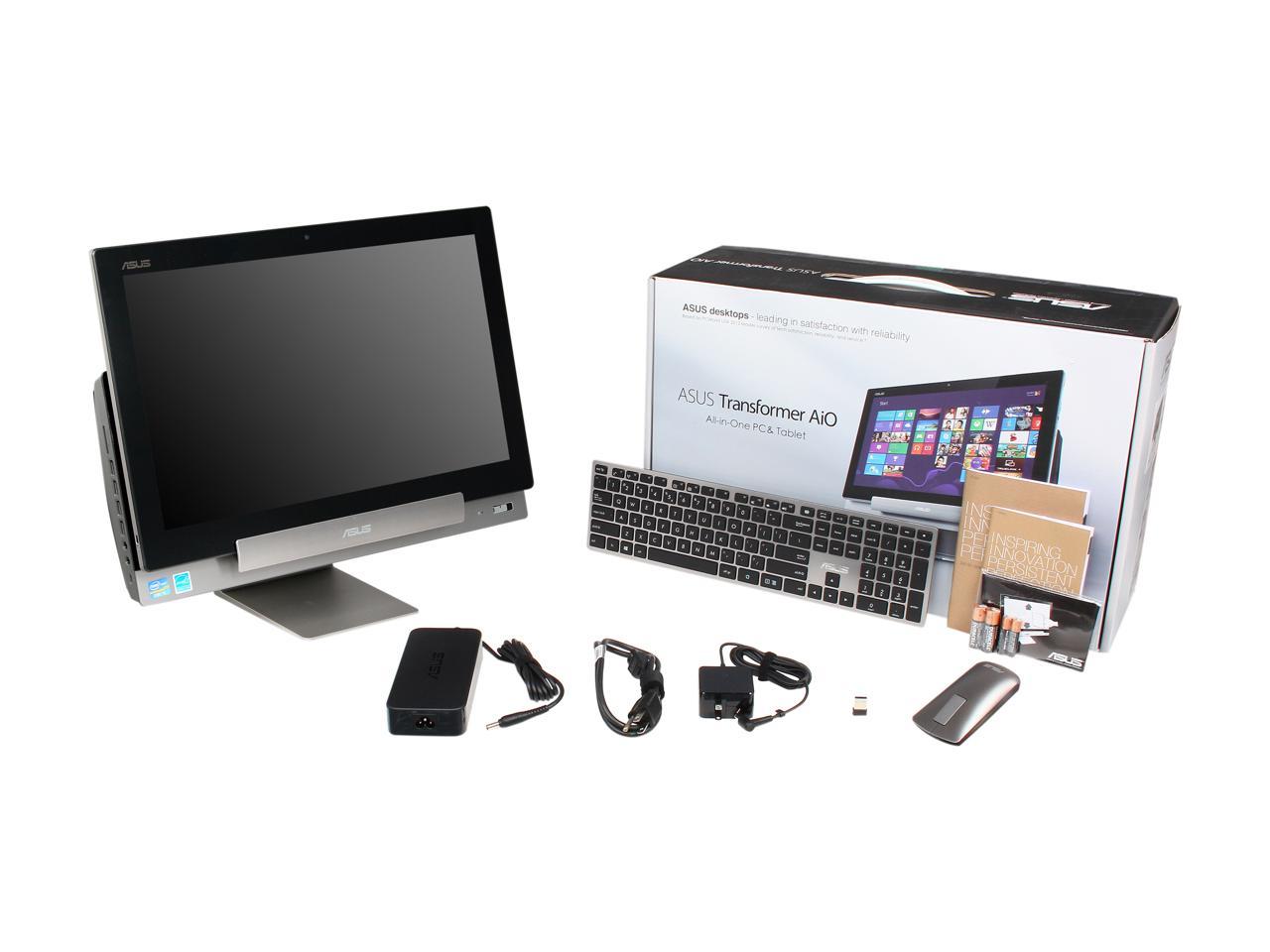 (7) Write a Review
OUT OF STOCK.
LOADING...
Overview
Specs
Reviews

Pros: I was waiting over a year for the release of this amazing machine since I first heard it was in the pipeline. Now that it is in my livingroom every minute of the wait was worth it. Windows boots in seconds, it is snappy and responsive. It is able to run windows without being connected to the base (this is different then what was originally planned. The speakers (both in the base unit and the tablet) have amazing range and effect. The screen is stunning and the touch interface perfect. Switching between Jelly Bean and Windows is a touch of a button and seamless. You can access windows files from Android and versa visa. Wireless keyboard and mouse are comfortable and functional. Although an 18 inch tablet may seem bulky or ltoo large it is light, balanced and has a built in adjustable stand and carrying handle. I actually really like the extra view - it really allows you the opportunity to appreciate the AOS. I couldnt be happier.

Cons: None really, as long as you have realistic expectations.

Overall Review: Bought this unit to check out the concept of tablet/computer. It serves me well as a business device, and being functional in office, coffee shop, conference room, etc. If you are expecting to watch high-def video from your base station (the computer) across spotty "coffee shop" connections - of course, this isn't going to work well. Have a good connection from hotel, and have properly set up your firewall and such? Works well. Movies played on Android tablet from memory also work well. So, good concept that exists between desktop and laptop. It is reasonably expandable with dual monitors, replacing memory and drives (I immediately upgraded the drives to SSD) So far - serving me well. It is not totally perfect (hence no 5 stars) but the flaws are easily worked through with a little understanding and *reasonable* expectations.

Pros: This system has the right idea of combining a touch screen to a desktop as well as allowing the the touch screen work as a fully functioning Android tablet. I really loved the concept and I thought this would be a wonderful gift for my mother. She likes using touch screen and likes larger screens. The docking station also then allowed the user to access Windows.

Cons: As much as I loved the concept of this AIO. The AIO failed to deliver. This device was purchased on 1/2/2014 and already I was a bit disappointed by the screen quality. It is marketed as a "18.4" LED (1920x1080) widescreen 178 degree wide viewing angle IPS Panel" according to the newegg specifications of this device. The first thing I noticed was that the screen was very lackluster. My laptops had better screen qualities. With that aside I thought it was going to be ok. I left for school and let my mother use it for a couple months. My father then called me one day saying that the desktop internet stopped working. The next time I went home I checked it out. It had network connection but no internet. I troubleshooted it for ages and called customer service. Nothing worked so I factory reset the desktop. Still did not work. Since then I have not been able to work on it, but the tablet and desktop are now extremely slow. I honestly am extremely disappointed in this product. I love ASUS and own over 20 of their products.

Overall Review: I am a loyal ASUS customer and I have spread that throughout my family and friends. I believe that most ASUS products are top notch, but this is the first one that I feel like throwing out the window. I got this for my parents so they would have an easier time browsing the web, but this has been nothing but a waste of money.

Pros: Convertible to tablet, has 2 different operating systems Android in tablet mode and Windows 8.1 in desktop mode. So far the hardware has been working well. Unfortunately I ran into some issues but was able to fix the problems.

Cons: Ran into some issues Android was not found on the tablet when separated from the base.

Did you find this review helpful?
Manufacturer Response:
Dear Valued Asus Customer, We are happy to hear that you resolved the issue with your AIO. Should you need further assistance, please email me at CC-Rick@asus.com and place case # N140922900 in the subject line. Thank you for choosing an ASUS product. Best, Rick Asus Customer Loyalty
William R.
Ownership: 1 month to 1 year
Verified Owner
Repair is terrilbe4/18/2014 8:17:16 PM

Cons: The reliability is really bad. Had to return due to not charging got replacement fast from Newegg. After about 3 months tablet started stuttering and hanging the N WiFi would cause problems. In about 4 months the tablet would not boot and got error messages. ASUS service desk was good and responsive and I sent the whole unit in. Got it back and the repair ticket said the Wifi was bad and they replaced the Motherboard. The only thing is I now have no N WiFi. The black glas base mount was all cracked when I received it back. So I am very very unhappy. I sent in a review of their service and asked them to call me but I have not heard anything back.

Overall Review: A unit at this price point should be considered an investment not a throwaway. It appears ASUS will not come out with a KITKAT version for the unit. UNACCEPTABLE. I would do my own but with the issues noted above I am hesitant just as I am hesitant to ever recommend ASUS again. And I own just about everything they make and I have recommended them for years in my consulting business. ASUS plase call me you have my number

Pros: So this thing looks like it will be my next purchase from Asus. I had an Asus laptop and it ran strong for four years until Windows Vista decided to take a dump and I decided to buy a new laptop. Well it's been one year, and I've wanted to replace this thing since a few months after I got it. My bad for going with the other four letter company that also starts with an A. So anyways, the video on this site says that there is an i7 model. I have searched the internet far and wide and have found nothing. I would really like this in an i7 unit. Also, does it have upgradeable RAM?

Pros: The pro's for this system, if it worked as advertised, are numerous. First off, having the two systems integrated into one is a fantastic concept. My wife and I purchased it primarily for this reason. She can use the tablet while I have the PC connected to my TV via HDMI. The PC is of a decent caliber, certainly not close to what one could build with the same $1300, but very good considering you get the world's largest android tablet as a monitor. I would easily give this product 5 eggs if it weren't for the issues I've had with it, I'm tempted to even now, just for the sheer strength of their design concept. Bullet Pros! *Worlds Largest Android Tablet *Integrated Splash Top feature makes it simple to switch from windows to PC *You are getting two unique and powerful systems for the price of one. *Integrated sound system on both the tablet and PC are phenomenal. You wouldn't expect to hear such sound quality from such tiny speakers. *Plenty of USB hook ups *Come with a nice wireless keyboard and mouse (much sturdier than I thought they would be) *Set up takes about 5mins out of the box. Side note about splash top I forgot to mention above. When it is able to find a connection, it is very useable. You can tell you are streaming, so but it's not so laggy that you want to throw the tablet across the room. On the contrary, I actually find it really nice to sit in my chair, read the news on the android side.. maybe some videos and what not. and then switch to streaming windows to do paperwork etc..

Cons: Now as far as the cons, there aren't that many. They are just terrible, and detract from the product as a whole. As soon as I got the system I noticed it had a hard time getting a good wifi signal.. and just to put this out there my wireless router has never been more than 15 feet from either the PC or tablet at any time during my ownership. The signal strength is usually good, but I goes up and down, and is often lost. I have run speed tests on the PC side and get readings anywhere from 1/mbs up to 25/mbs .. I have a 100/mpbs download speed on my other computers.. and all but one of those are also wireless. The next issue is windows 8. I want to stab whoever decided to put it on this system. Yes it's new and flashy.. sure the number that represents the OS is an 8 and not a 7 so it certainly would seem better... but no.. no it is not. I could go on about my hate for windows 8 for quite some time, but really my main issue is the wifi, windows 8 is just a side hatred. bullet points of hate! *Terrible Wifi *Windows 8 *Only a single HDMI port Side note on the wifi.. it's actually come to a point now where I am only able to connect my PC to my wifi. The tablet can see the various wifi channels available around here, but it is unable to connect. I can literally (and have actually tried) sitting it directly on top of my router with no success. I did some research online and found this is a VERY common problem with ASUS tablets, as they seem to be using a cheap wifi card. I will likely have to RMA this tablet to get my issue fixed, and currently I'm only really able to use this as a desktop. I haven't tried to contact ASUS yet, and I will update (especially if the experience is negative) this post when I do. I have heard though, from multiple sources that it is very very difficult to get any help on this issue and it seems ASUS doesn't really care. So be forewarned on that, it may be better to wait until this technology is a little more proven to buy it.

Overall Review: Overall I would recommend the system to someone who has other computers, but is perhaps buying it to fill a niche roll in their home as shared system, and perhaps for the novelty of the tablet. If you are looking to upgrade your current system with this one, and are thinking of it with longevity, I would consider other options. The wifi issue is so bad, had I know about it before I purchased, I would not have done so. The system is a great idea, I truly love the direction they are going in, but they have some technical flaws needing to be addressed, and it may be better for some consumers to merely wait until the next iteration comes on the market.

0 out of 2 people found this review helpful. Did you?
Manufacturer Response:
Dear B. Quinn, Please visit our support site and download the latest updates available for your unit at: http://www.asus.com/AllinOne_PCs/ASUS_Transformer_AiO_P1801/#support If you require further assistance with this product, then please contact me at cl-celeste@asus.com and include case#3147571 in the subject line. ASUS Customer Loyalty is here to listen and respond to your concerns and to help you with a positive ASUS experience. Sincerely, Celeste ASUS Customer Loyalty