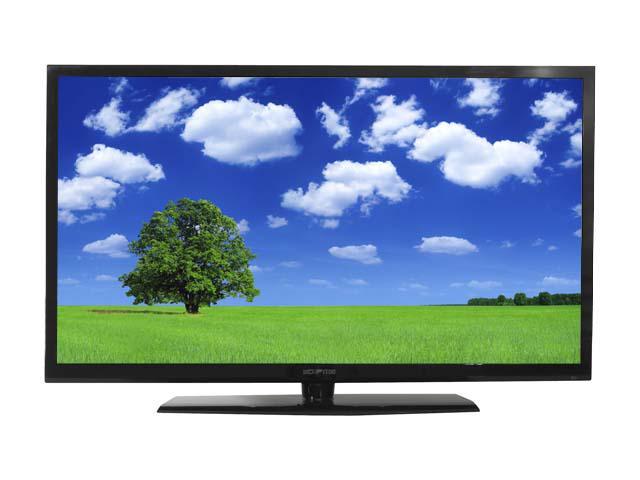 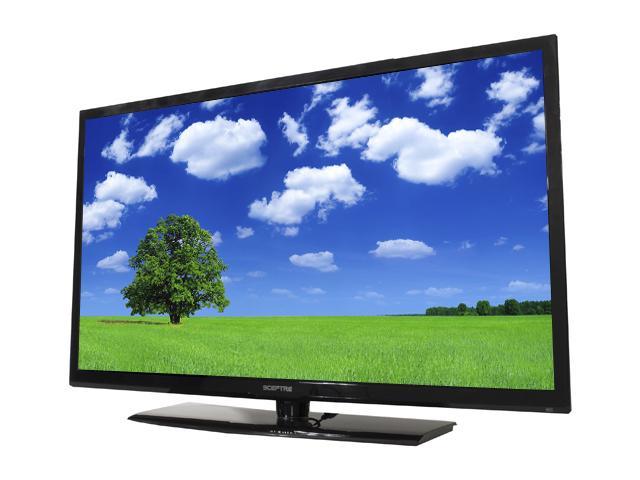 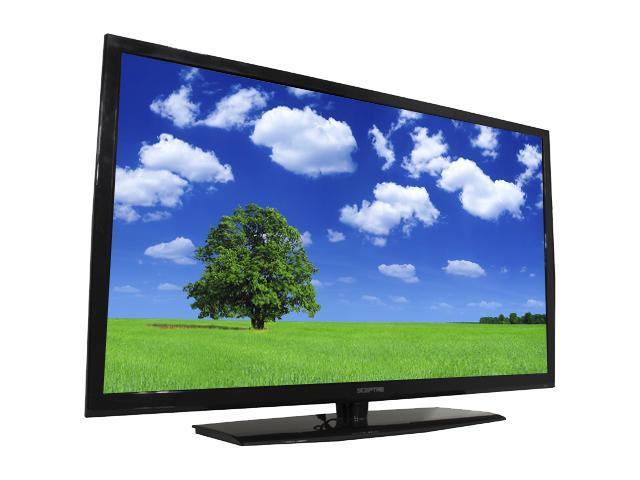 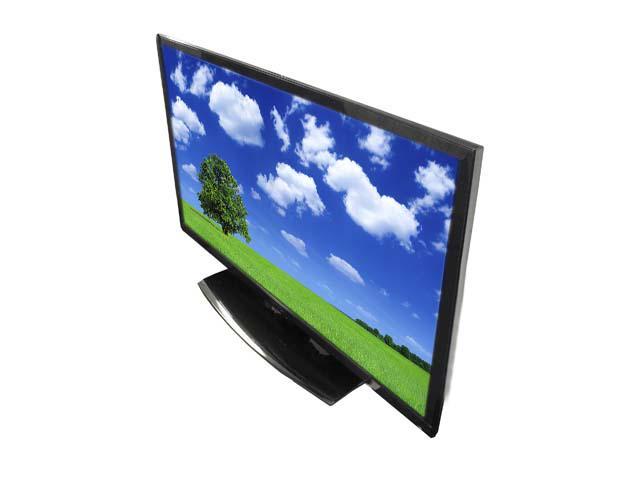 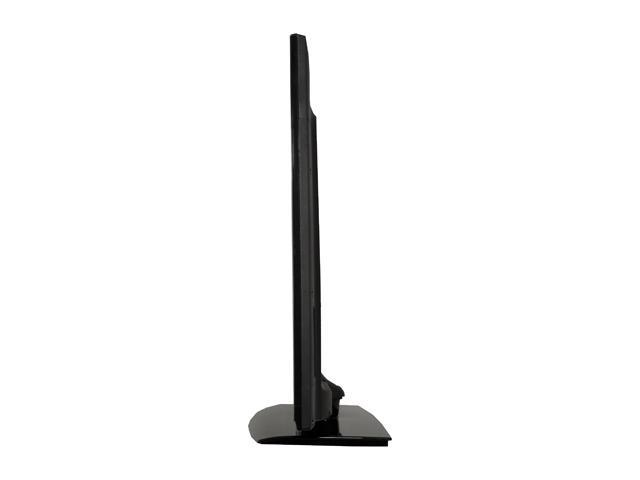 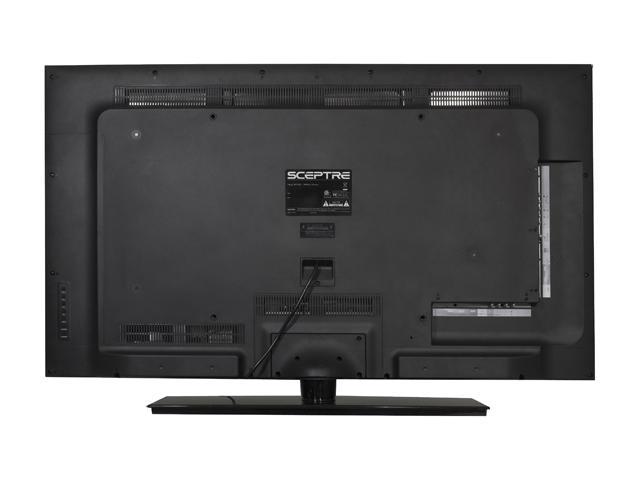 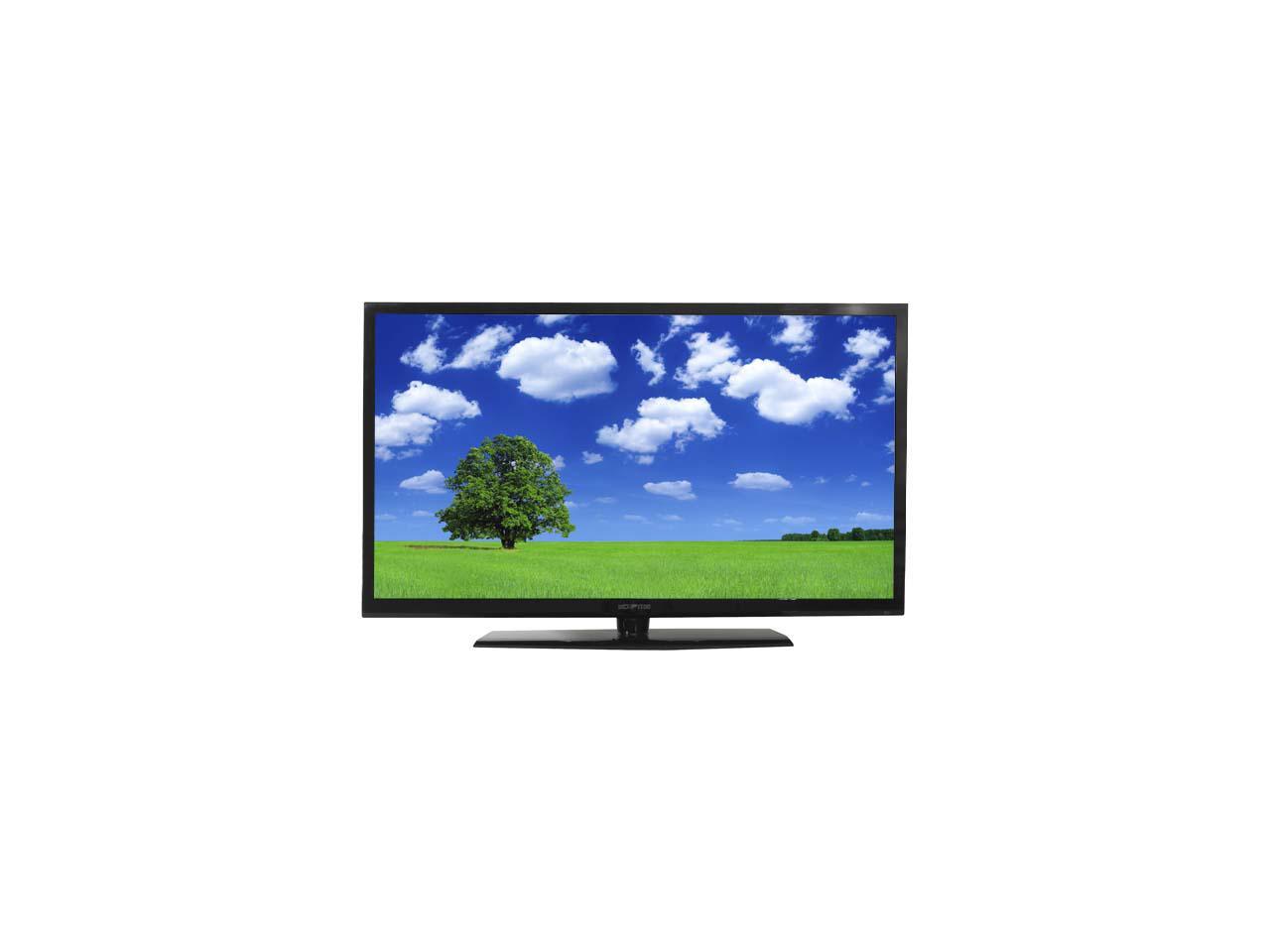 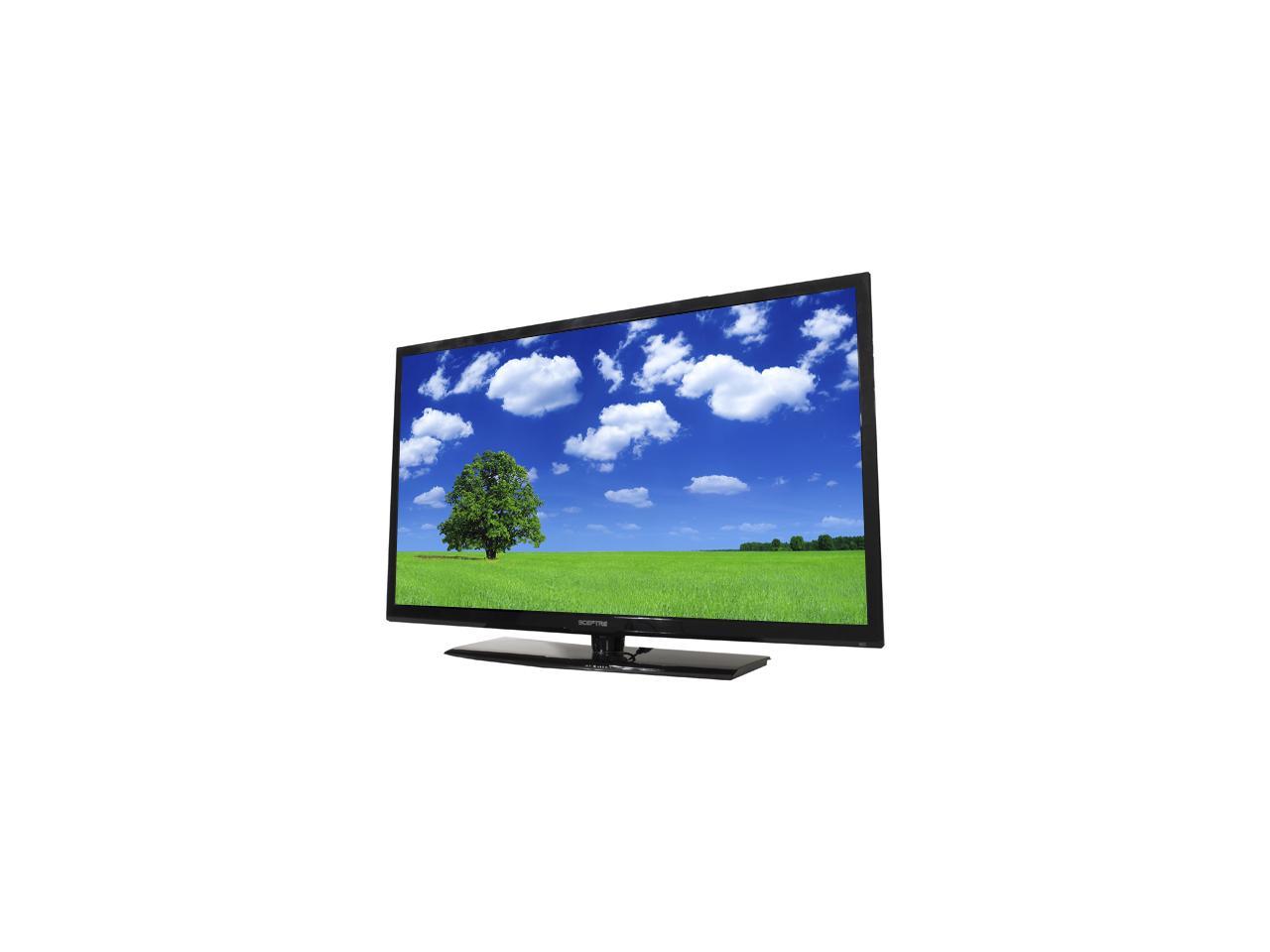 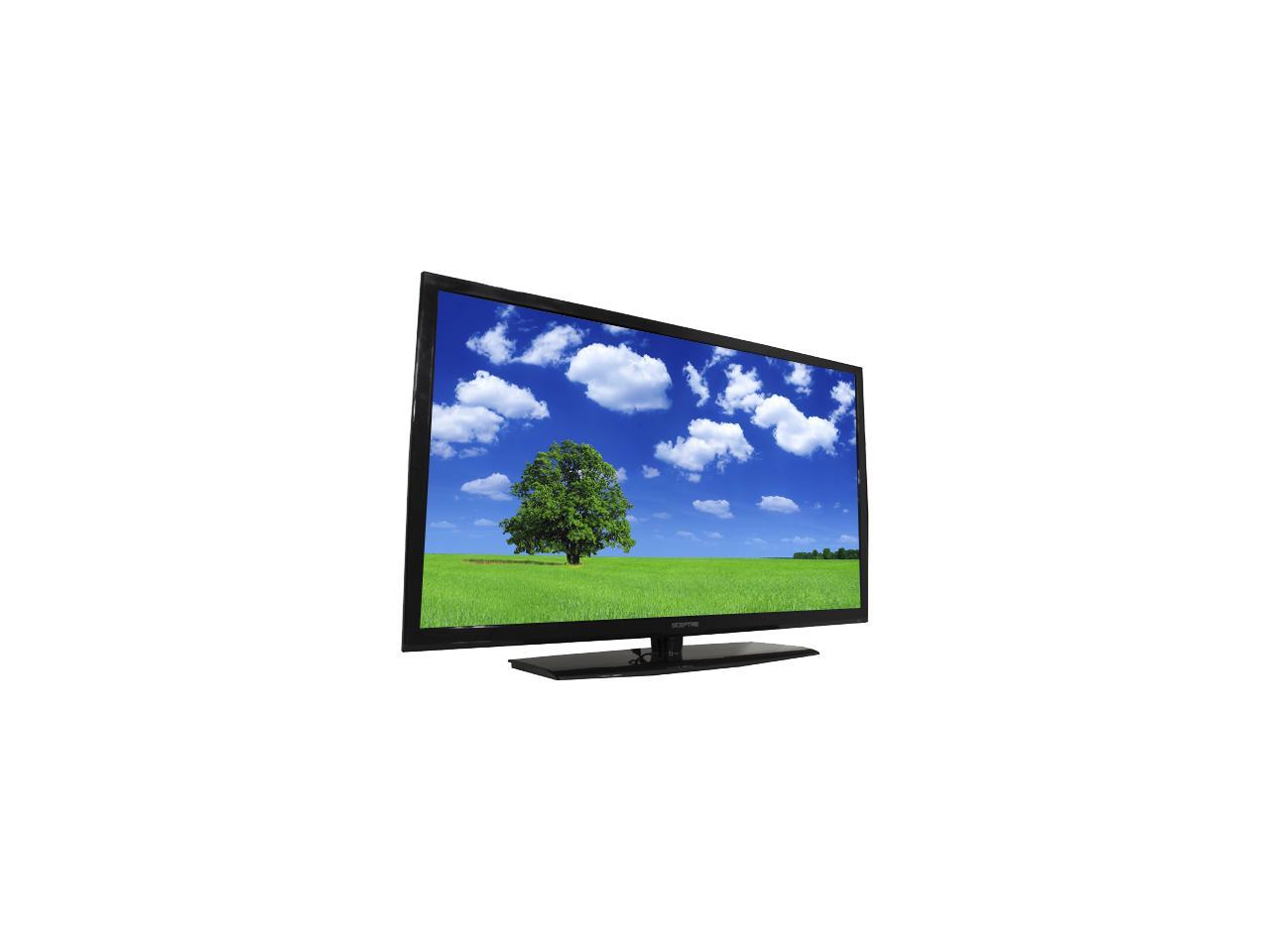 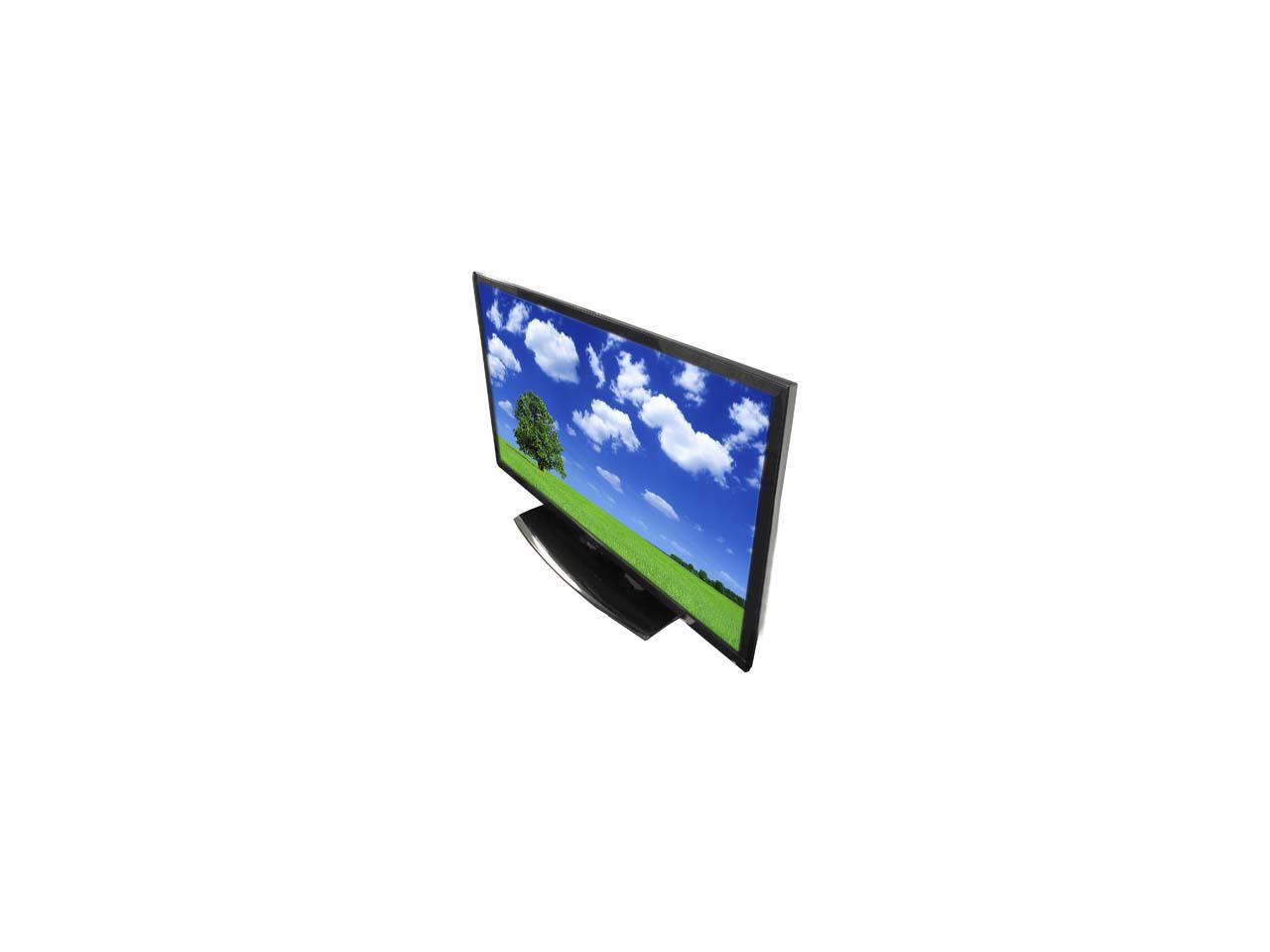 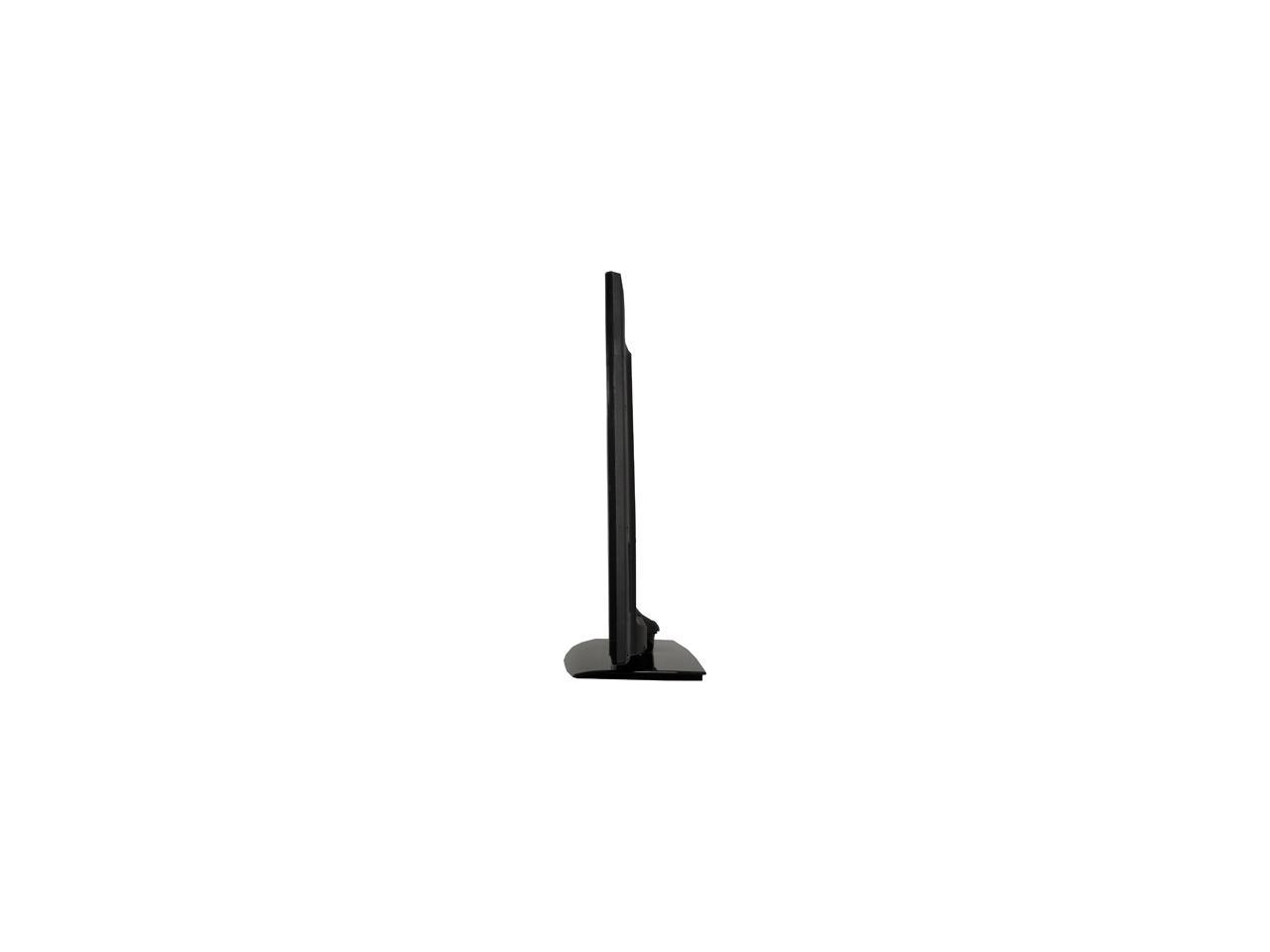 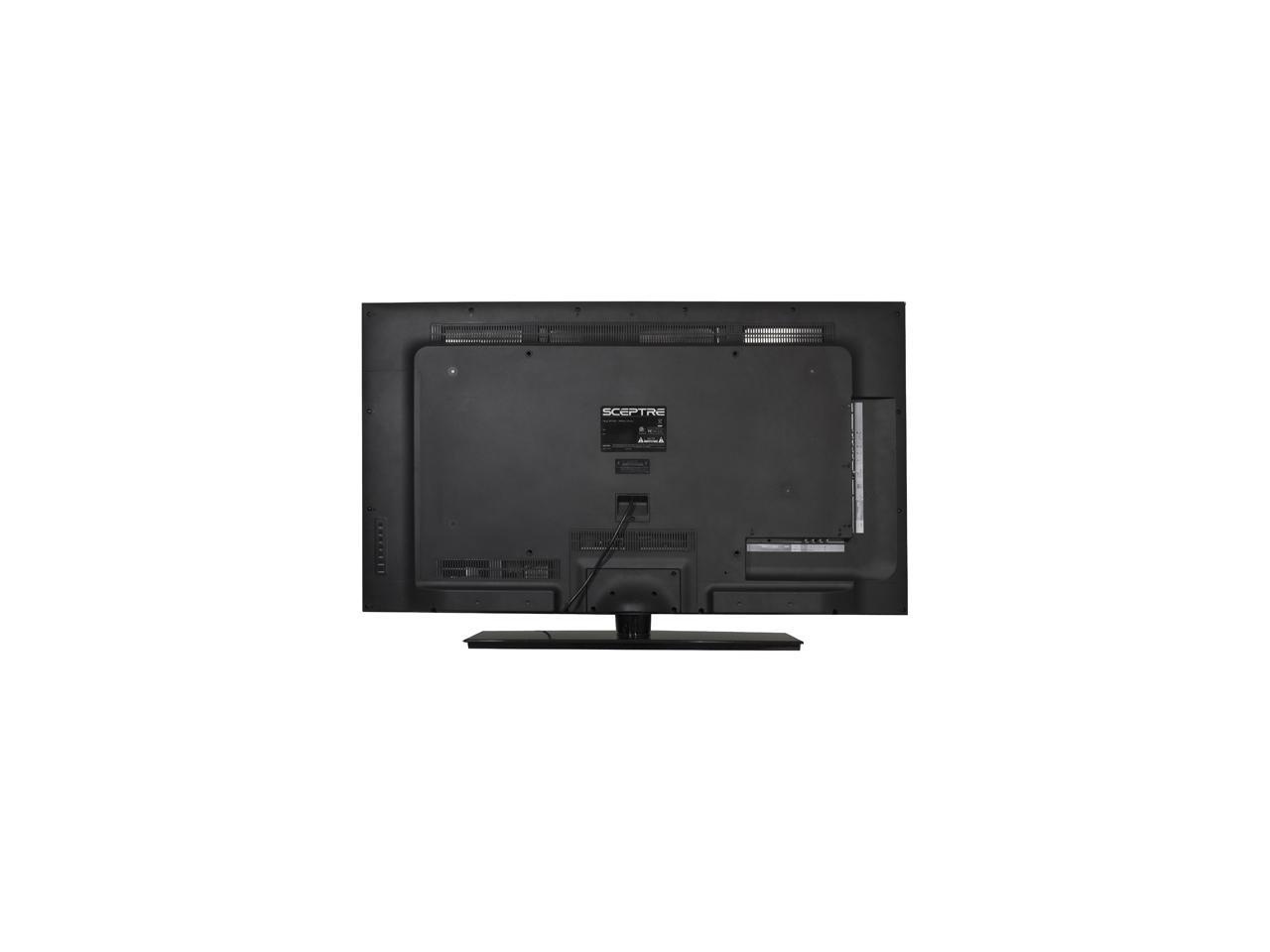 Sceptre E465BV-FHDD a 46" LED 1080P 3D HDTV, which comes with three stylish sleek polarized glasses and one clip-on. With these four wonderful polarized glasses, you can invite all your friends over to enjoy this new amazing 3D HDTV! This 3D HDTV lets you virtually watch images pop out right in front of you for the ultimate experience and added SRS TruSurround Sound HD to enhance the audio quality. The sleek and stylish 3D HDTV comes with 5 HDMI ports, did we mention, 5 that's enough for your to connect all your favorite devices at once, a USB port so you can view or listen to your favorite photos/ audios on your TV. Not only can this 3D TV be switched to 3D to 2D mode but it can also be switched as a computer monitor as well.

Cons: The specs for the LED state 172 Degrees of viewing angle. This is true, but at that angle, colors are a bit washed out. A 120 - 135 Degree Viewing angle is best for proper color.

Overall Review: a Great LED TV for the price and 3D Ready. The Clip-On Polarized 3D Glasses that come with the TV are the BEST. They should of gave 3 Clip-Ons and 1 normal instead of the other way around. But you only get 3 Normal 3D Glasses and 1 Clip-on. Recommend buying a few more Polarized Clip-ons when you can

Pros: An Absolute bargain for a 3D HDTV at this price: performs better than any of the other mid-level price point TV's I researched. I shopped 6 physical stores and couldn't find anything to compare with the Sceptre in price/feature. Took time to research reviews and ratings on line especially as I was unfamiliar with the brand, and found that it consistently receives good reviews and ratings from everywhere. Picture quality, colors are awesome, as expected from an LED TV, set up is a breeze (took less than 15 minutes to hook up to my home theatre system- including dialing in personal preferences for sound and picture). Would definitely recommend this TV. While some reviews have dinged the sound quality, it is definitely passable, and easily optimized - and the high dollar boxes get the same comments- ulimately you are going to want to run this through your A/V receiver or get a sound bar if you want the deep sound you hear when you are looking at them in the stores (take time to notice that they are almost always hooked up to a sound bar or home theatre running surround sound, you never hear just the TV itself...). As far as picture quality: I was a little concerned that a 4000:1 contrast ratio would denote a less than optimum picture, until I did research and found 1: that is the limit of the eye to detect anyway, 2: ALL movies are produced below that range, and 3: this is an actual vs. Dynamic ratio that Sceptre uses (Dynamic are often highly over inflated numbers, and pointless, as your eyes cannot define those ranges anyway). Simply stated, you would be hard pressed to point out any improvement in picture quality between this, and the competitors that run double to triple the price. When I started looking, I was stuck on a SmartTV, but, that functionality is very easily accomplished with a 3D Smart Blu-Ray player (which you'll want to get to optimize the 3D, although the TV's internal upscaling does a good job converting 2D-to-3D, it's not the same as native 3D resolution from the Blu-Ray player). Hooked this up to an LG BP620 Smart 3D Blu-Ray and it's mind blowing how spectacular the picture and sound is.

Cons: Have not found any yet: It performs as advertised.

Overall Review: Awesome HDTV, will definitely recommend to my friends and associates. Although not familiar with the brand name, research shows that it is, in fact, built by a large name brand - won't spoil that here- look it up! (In fact, when ever you look at off-brand TV's don't be surprised to find out that Sony, Hitachi, LG, and Samsung in the end manufacture most of them!)

Pros: great looking TV, the 3D function is nifty and its 2D-3D conversion is interesting. it doesn't' always look that great but not the TV's fault. so far there hasn't been any issues with the two i got.

Pros: Great price! Lowest price I've seen for an LED 3D TV! Easy mounting to base stand. Very easy to set up and connect to Comcast cable box, XBOX 360, PC, and audio system. Amazing 3D picture on true 3D content. It also has a 2D to 3D conversion which provides a nice 3D effect on 2D content. Easy to use remote with convenient 3D effect buttons. 3 passive 3D glasses, plus 1 clip-on glasses. They do have a cheaper feel to them, but they're very light-weight and comfortable. I haven't priced replacements but they can't be much.

Cons: No optical audio output; only has RCA Coax for digital sound. Not really a con for me as I just use the TV's stereo headphone out, but those in need of digital output must have RCA capable audio equipment.

Overall Review: I did some research about this brand and found very favorable reviews wherever I looked. Look up the 42" version of this TV here on newegg.com to find some of them. The 2D to 3D conversion effect doesn't give much depth within the picture itself, but rather you see the entire picture either in front of, or behind, the TV's frame, depending on your 3D settings. So it's a pretty cool effect, just don't expect to see any increase in depth between the images onscreen. The TV really shines on true 3D content. From my PC I can play back ripped Bluray .mkv files in HSBS (half side by side), or Top/Bottom formats, select the appropriate 3D mode on the TV and get AMAZING 3D quality! Comcast offers quite a bit of 3D content using the Top/Bottom format, and again the picture is amazing. I actually do not (yet) own a 3D Bluray player but I understand the picture quality should be better than the side by side or top/bottom formats because the Bluray displays two full resolution images combined by the TV to give you the best possible picture.

Overall Review: Bought this on sale about a month ago. Hooked it up to a PS3 and my HD box from Comcast not really expecting too much for the price. The picture is amazing! Set it to vivid picture right away, and it's beautiful. It really shines in 3D mode though. Watched The Hobbit 3D, BLOWN AWAY. Best deal on the market right now for an HD TV. Period.

Pros: Lots of Connection Ports the TV is practically a steal for $399.99 great pic sound is not great like with most flat panel TV, but I have a sound bar so not an issue for me 3d is amazing, and the remote is for Directv books says use Sony codes so not sure if this means it is a re-branded Sony, but I like TV and highly recommend this TV and truly wish I purchased 2.

Cons: None at this price

Pros: High quality TV; a lot of bang for your bucks. The outside of the set is very attractive. I have another 3D television that is 240 MHZ and the 3D effects on this set are as good (which is very good). Remote is uncluttered with many, easy-to-use, simple features. You can't go wrong with this bargain.

Overall Review: Buy it, you'll be happy as I am.