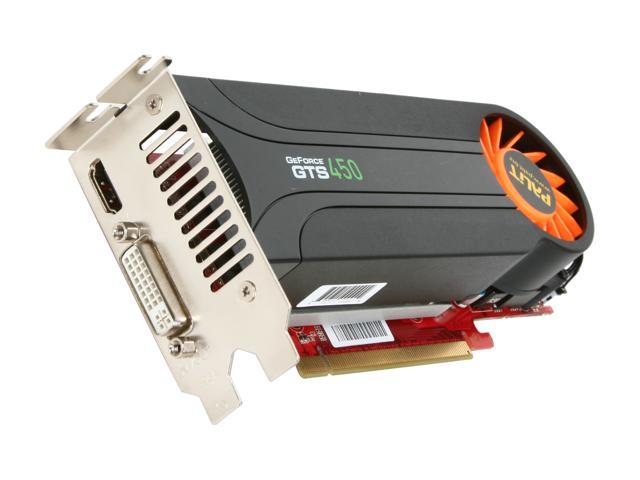 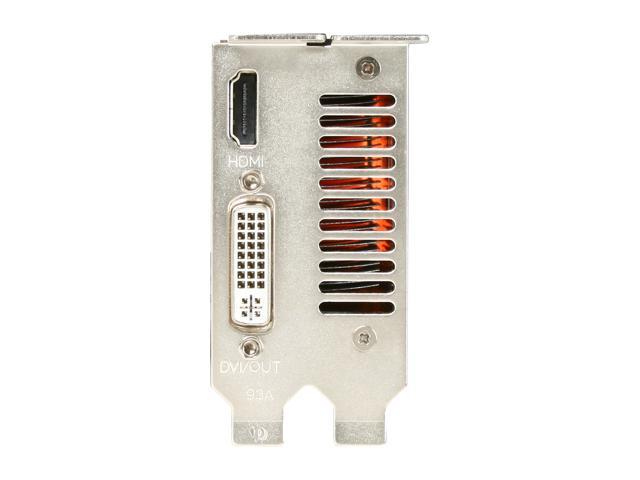 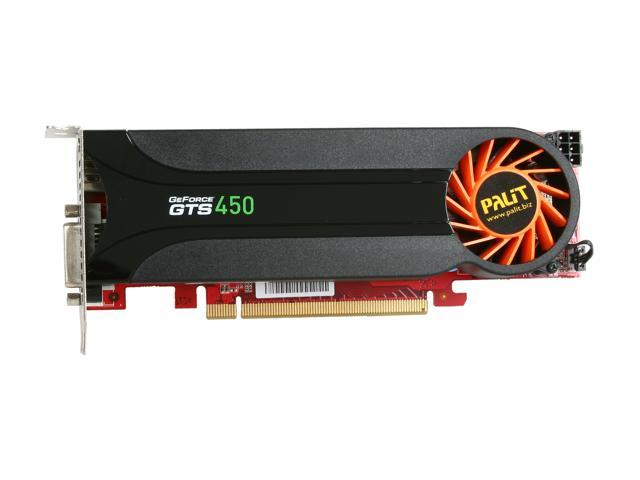 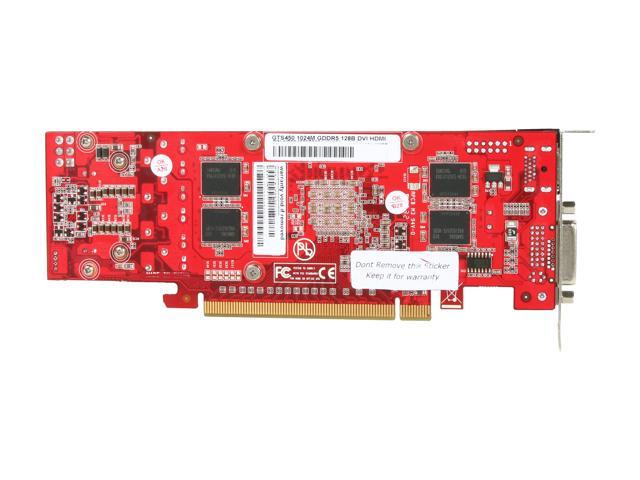 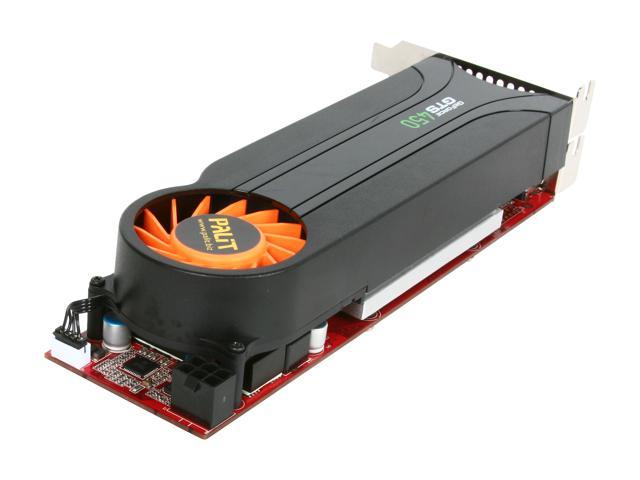 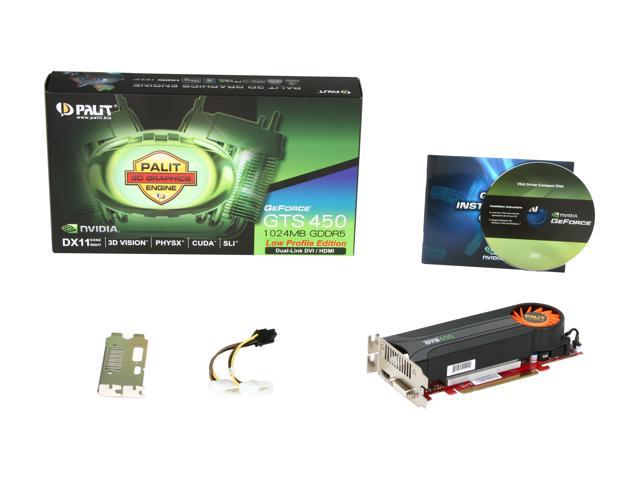 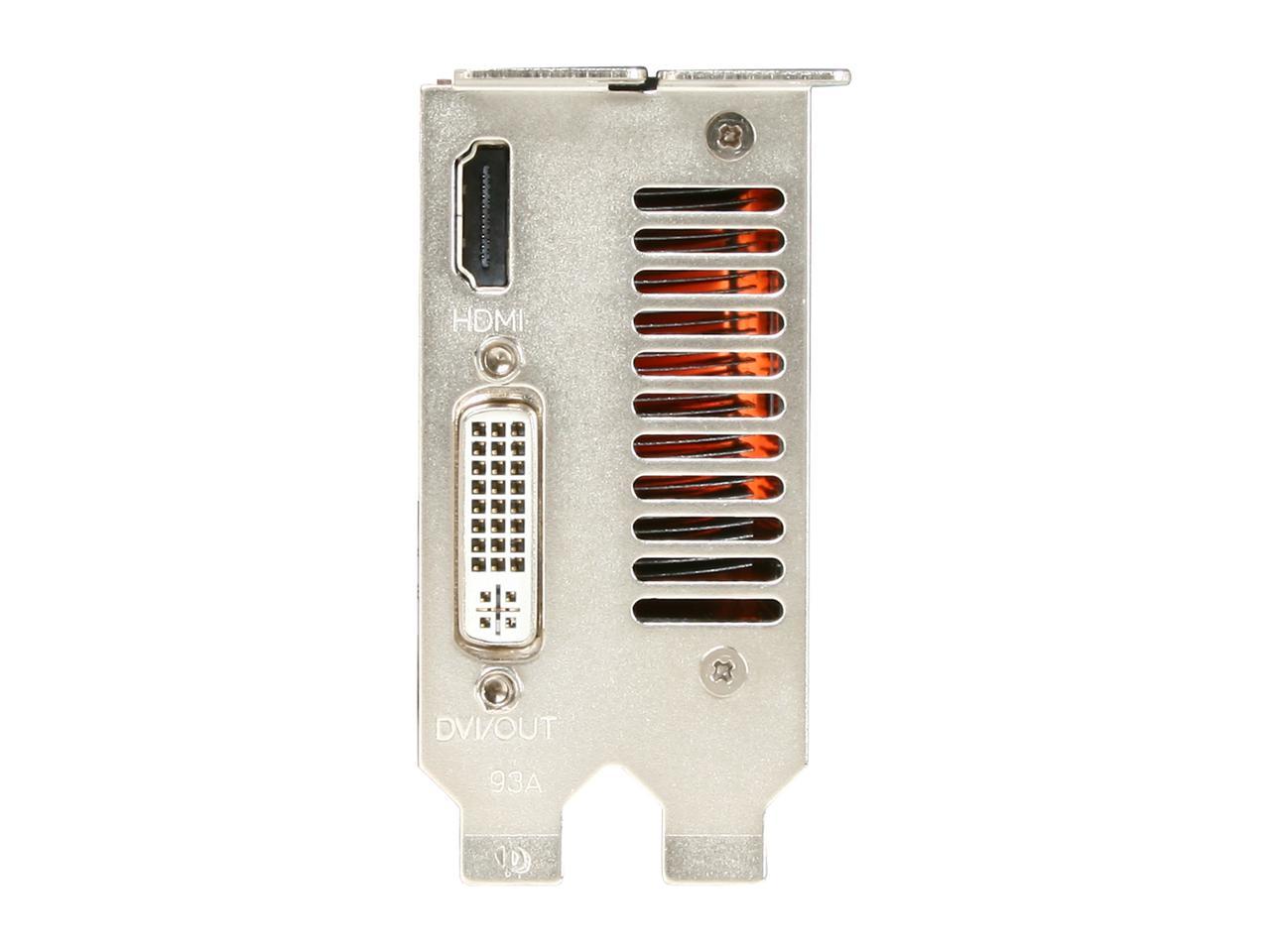 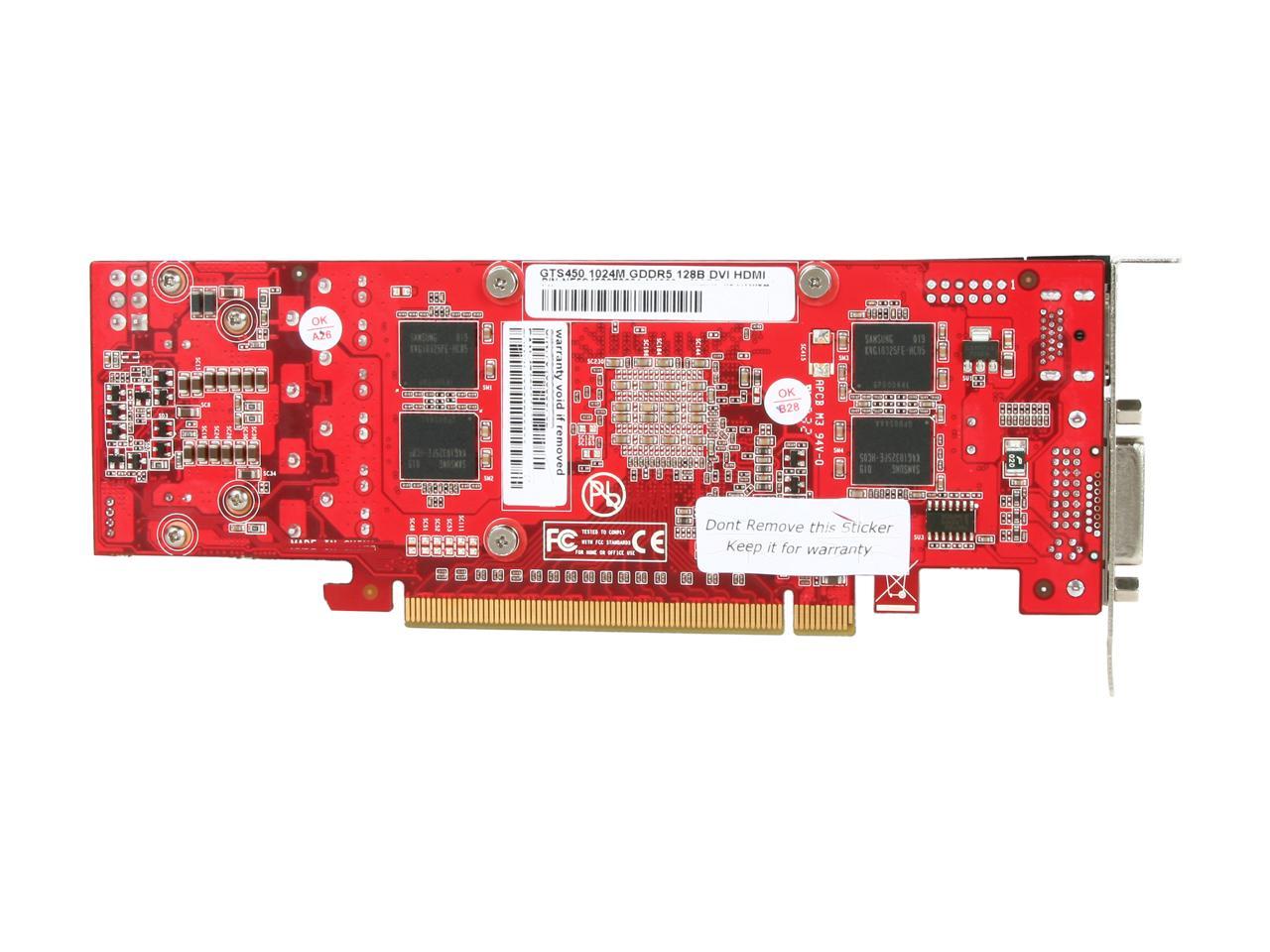 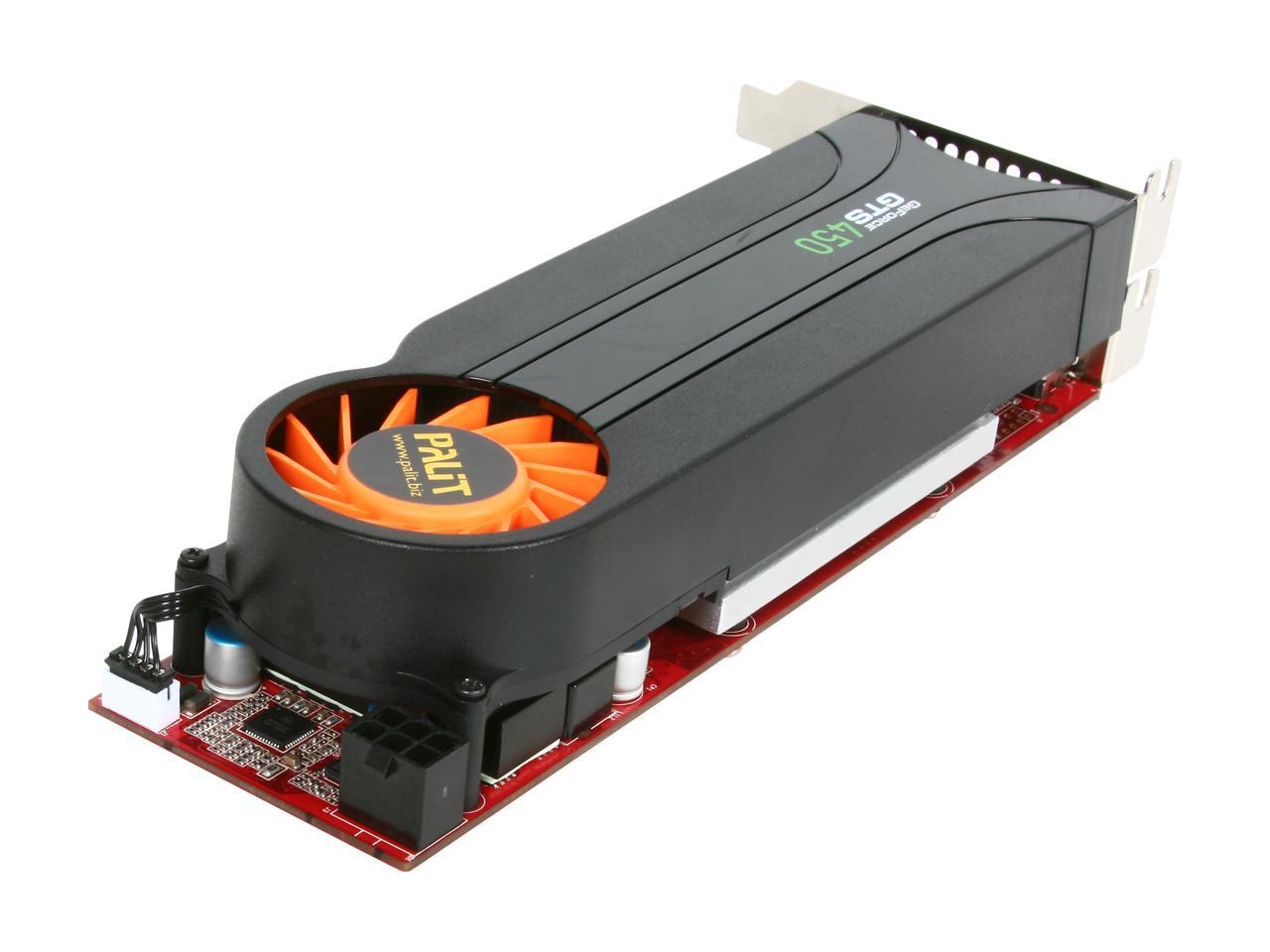 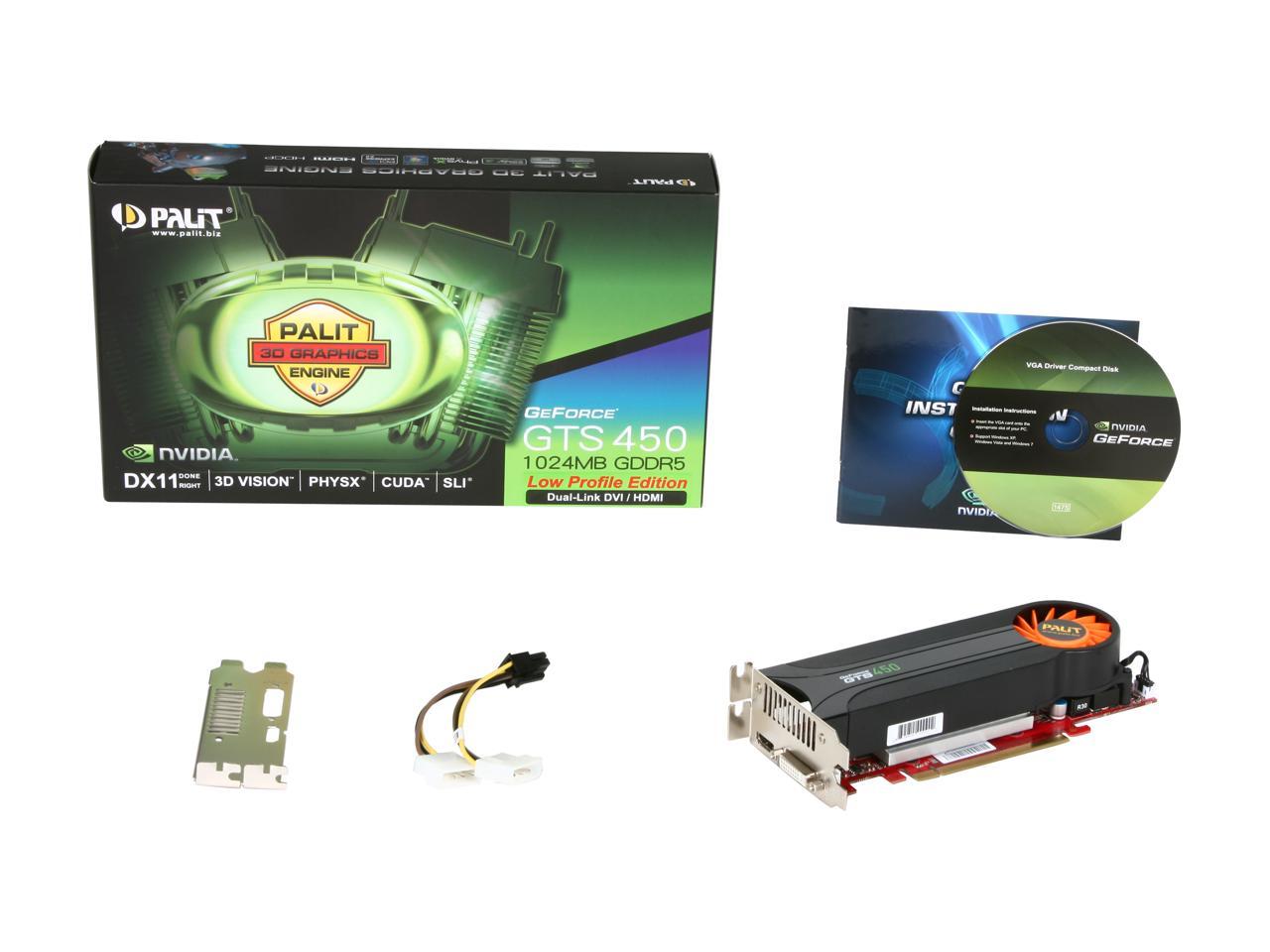 Pros: It's a gts 450. Option for low profile. Actually works well if you don't mind the squeal.

Cons: Loud under load. Like hairdryer loud, a higher pitch than anything else in my living room. I originally purchased this for it's form factor, placing it into a smaller build, though that project was later abandoned entirely. After placing this card into a larger case with better airflow, I was still seeing warmer temps that I would like. I removed the heat sink to re seat with some different paste (This involves tearing a warranty sticker, by the way.) I was less than impressed with what I found. Cheap hunk of metal and bent fins. Some of mine were actually touching each other.

Overall Review: A bit amazed. After the thought and design of a low profile card, they just throw (what appears to be) the cheapest heat sink they could find on this thing. Anyway, after re-seating (and re bending...sigh) the sink I'm running 40's idle and low 80's under load with furmark. Much better than the 90-100's I was running before.

Cons: RIDICULOUSLY LOUD. I don't mean it's just loud enough to be bothersome, I mean it's loud enough that other people around me had to raise their voice for me to hear them. Yes you can argue that it's because of the form factor (and therefore the smaller heatsink and fan), but it's clear that the design isn't very efficient: 1) The base of the cooler is very rough, which prevents good contact with the processor. 2) The fins only take up about half the available space under that plastic cover - they should have used as much space as possible, and maybe even thrown in a heatpipe or two. 3) The shape of the fins doesn't allow the airflow to be used as efficiently as possible. Instead of pointing straight up they are bent over to one side. So there's a huge gap on one side of the cooler, with all the fins squished together going towards the other. Spreading them out evenly would have allowed for better airflow (and better cooling) at any given fan speed. 4) Copper would have been

Overall Review: When idle, or under very little load, the card is inaudible. You can put your ear up to it and you'll only barely hear it. But if you're not planning on fully tapping into the potential of the card, then you're wasting your money on it. A better purchase is Sparkle 9800GT that's currently for sale. It's about the same speed as this card (contrary to what nVidia would have you believe), but it uses 30W less under load, and puts out a lot less heat. Less heat = easier to cool. Coupled with a better (but still mediocre) HSF design, it beats this one by a mile. I just wish there was a good aftermarket cooler for cards like this.

Pros: I don't have a huge monitor (1280x1024) and this card maxes out every game I've played on it so far. Alice Madness Returns runs beautifully on it with max settings. The card follows the reference GTS 450 design, but I did a small OC to 800 MHz using Afterburner. The number just feels better although it probably doesn't do much in reality. The GTS 450 is a great card to have if you're playing at my resolution or up to 1680x1050. The fan noise other reviews talked about, I don't really hear it when I'm gaming. I mean yes you hear for 1 second when your computer boots because the fan spins up then down, but the volume of my games easily drowns out any noise coming from the card.

Cons: It's kind of an ugly card. Reminds me of a baguette. Maybe you don't want your acrylic case window showing the card to the entire world. Not much room to OC, but at stock frequencies it works fine on the resolutions the GTS 450 is meant to play at.

Pros: This card runs like a beast for a low profile card. I got all my games running at 1920x1080 and they all run 45+ fps. World of Warcraft Cataclysm beta everything ultra = 60 fps by yourself. In a raid or with alot going on it can come down to 25 fps. 54 fps on starcraft 2. 20-65 fps on gta 5 ( I think its drive issue for low fps) Splinter Cell Conviction 50+ fps. Mafia 2 55 everything ultra 55 fps. This will turn your small form factor rig into a good gaming system at a great price!

Cons: THIS CARD GETS SCOLDING HOT. I installed the card and first noticed after installing the desktop nvidia gpu gadget, my card was hitting 100c+!!!! It came defaulted at fan clock speed 0%. Anyways, I installed MSI Afterburner and used the gpu auto fan clock option and with the clock overclocked to 822/1622 I get about 65c with no side cover and a fan blowing on case. If you run a pc with the side case on, good luck, this video card gets extremely hot with my experience.

Overall Review: Download MSI Afterburner Immediately to auto control fan speed for video card or risk frying it. The free nvidia civilization upgrade is an "UPGRADE" not the full game. You buy the regular game the code that comes with make it collectors edition.

Pros: Overclocks pretty well. Performance is as expected. Has not failed yet.

Cons: Kind of loud when idle. Also mine gets hotter than I would expect under load.

Overall Review: You must do everything perfectly if you expect to get a rebate from this company. One mistake and you will never hear from them again. Poor rebate support.

Cons: gets hot, up to 80 degrees in certain games. fan gets very loud.

Overall Review: If your a gamer and stuck with a low profile case like i was, this is an amazing card. Just make sure you have enough power to run it. However if you don't need a low profile card, i would avoid this one and opt for one with better cooling.