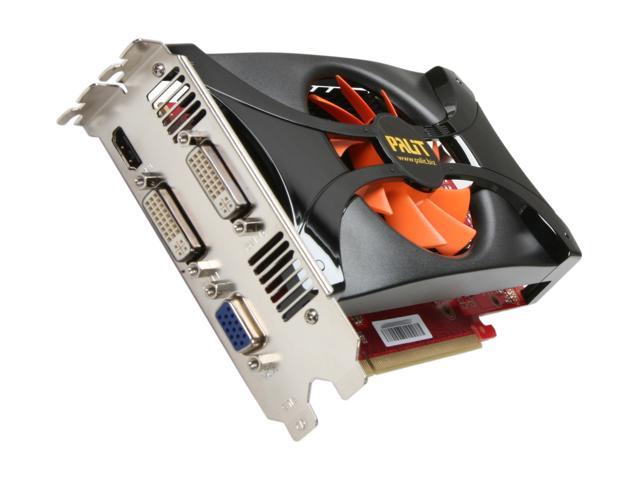 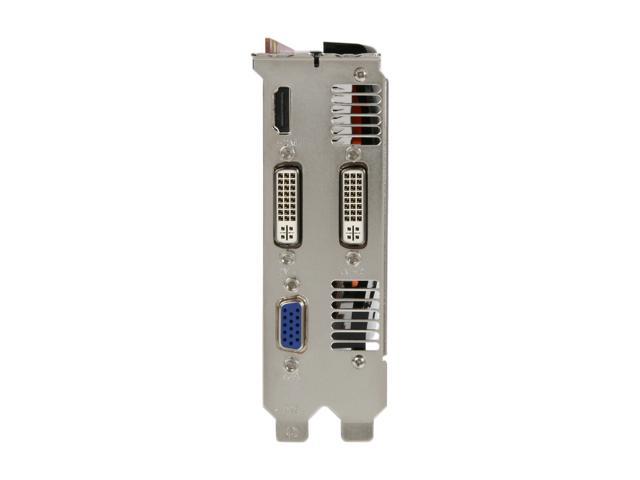 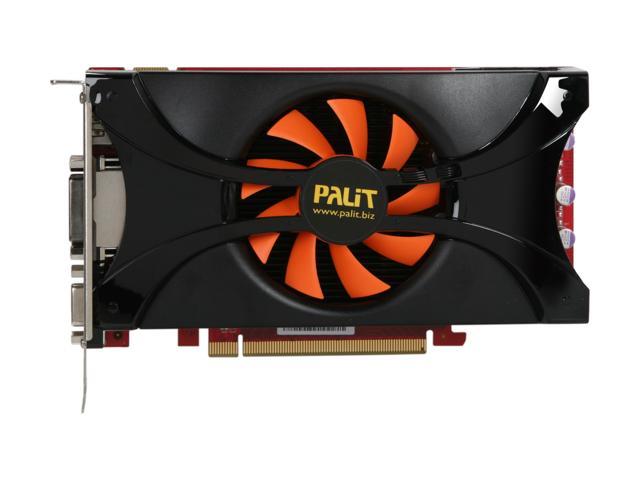 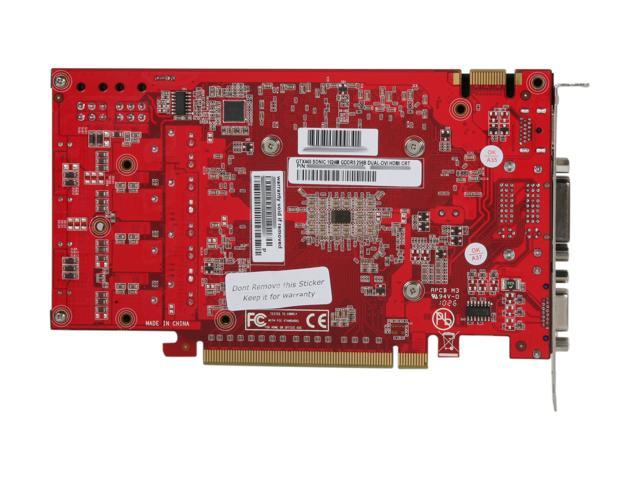 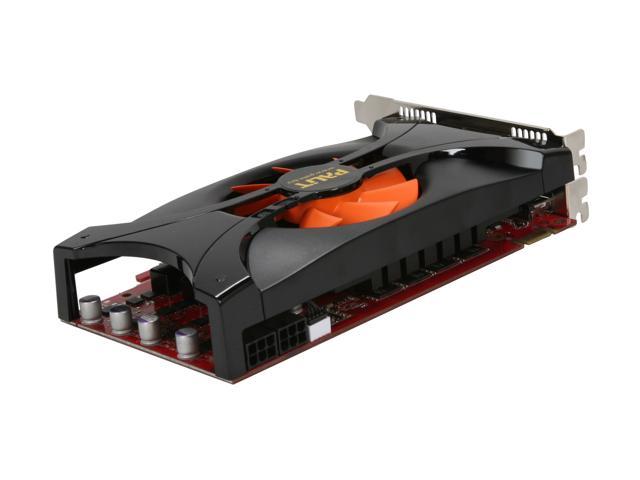 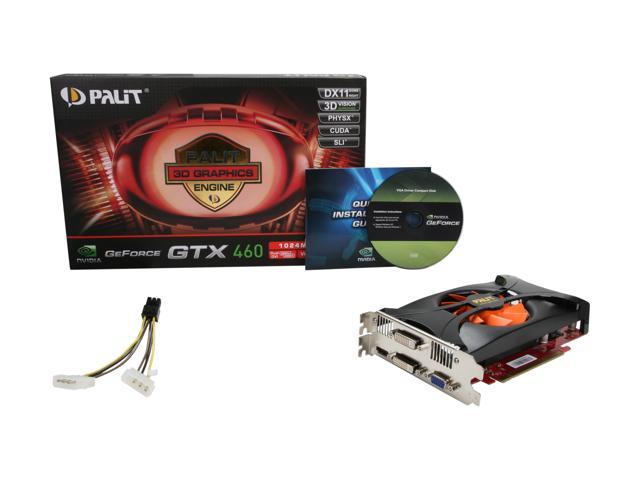 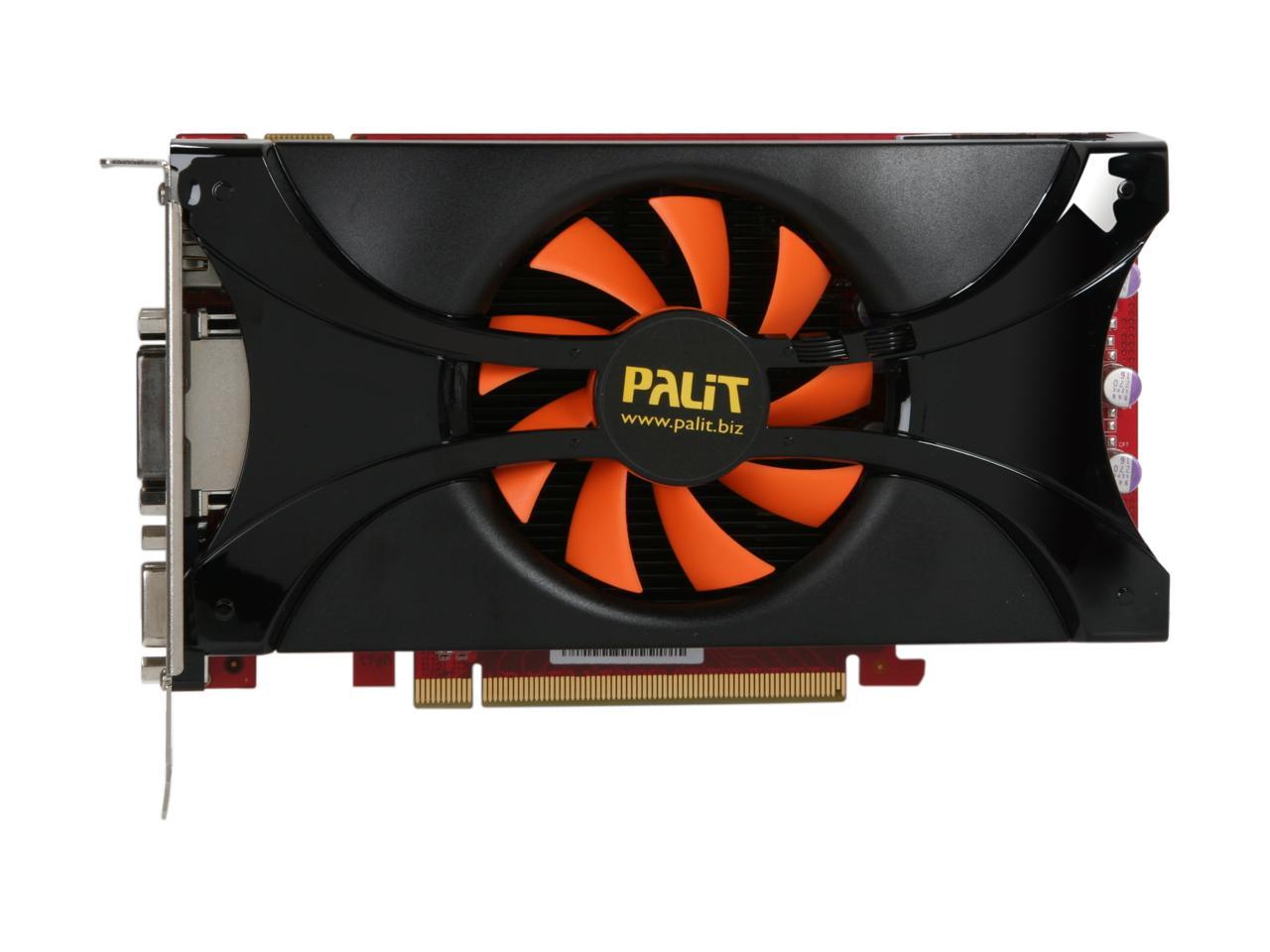 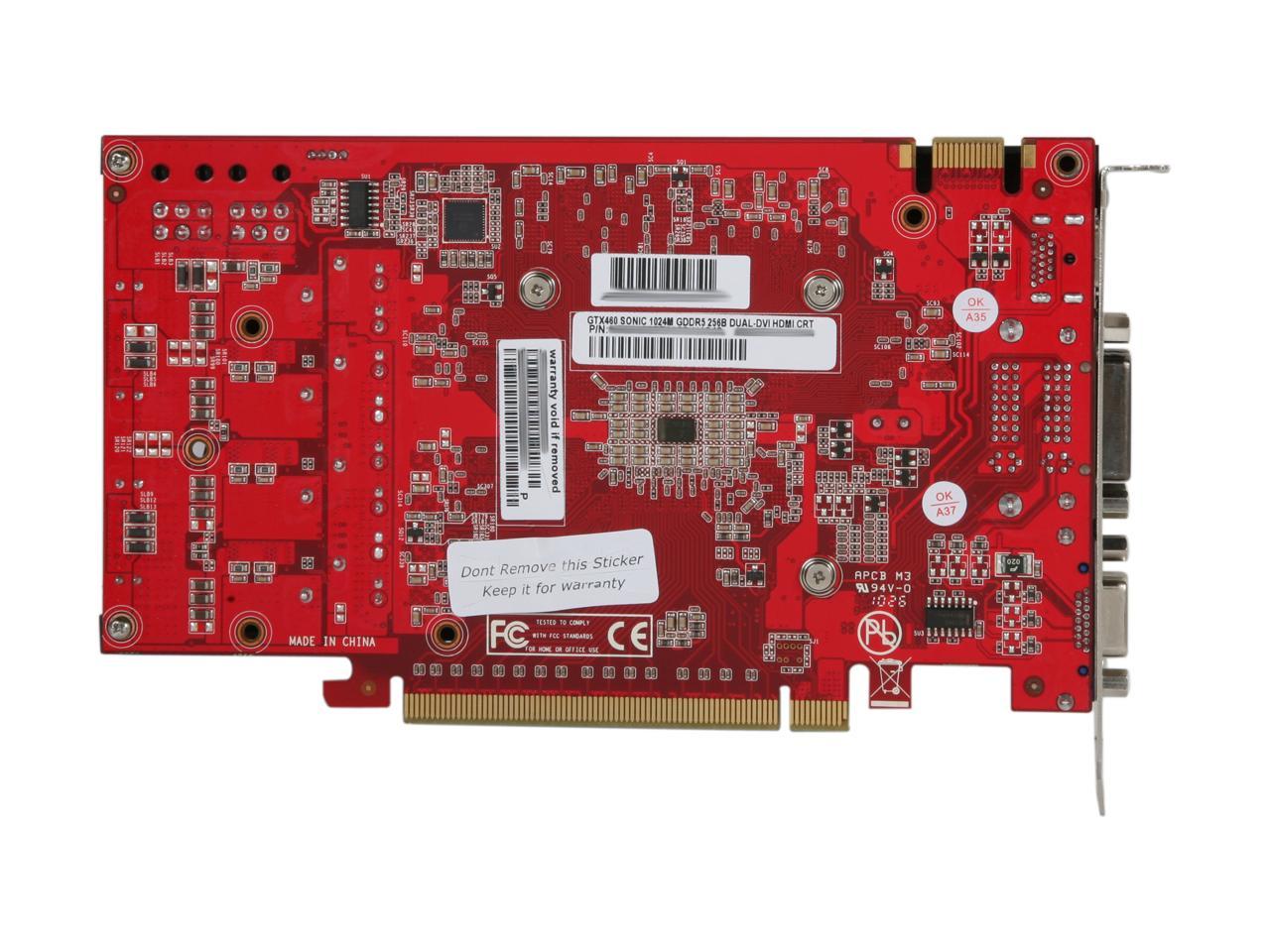 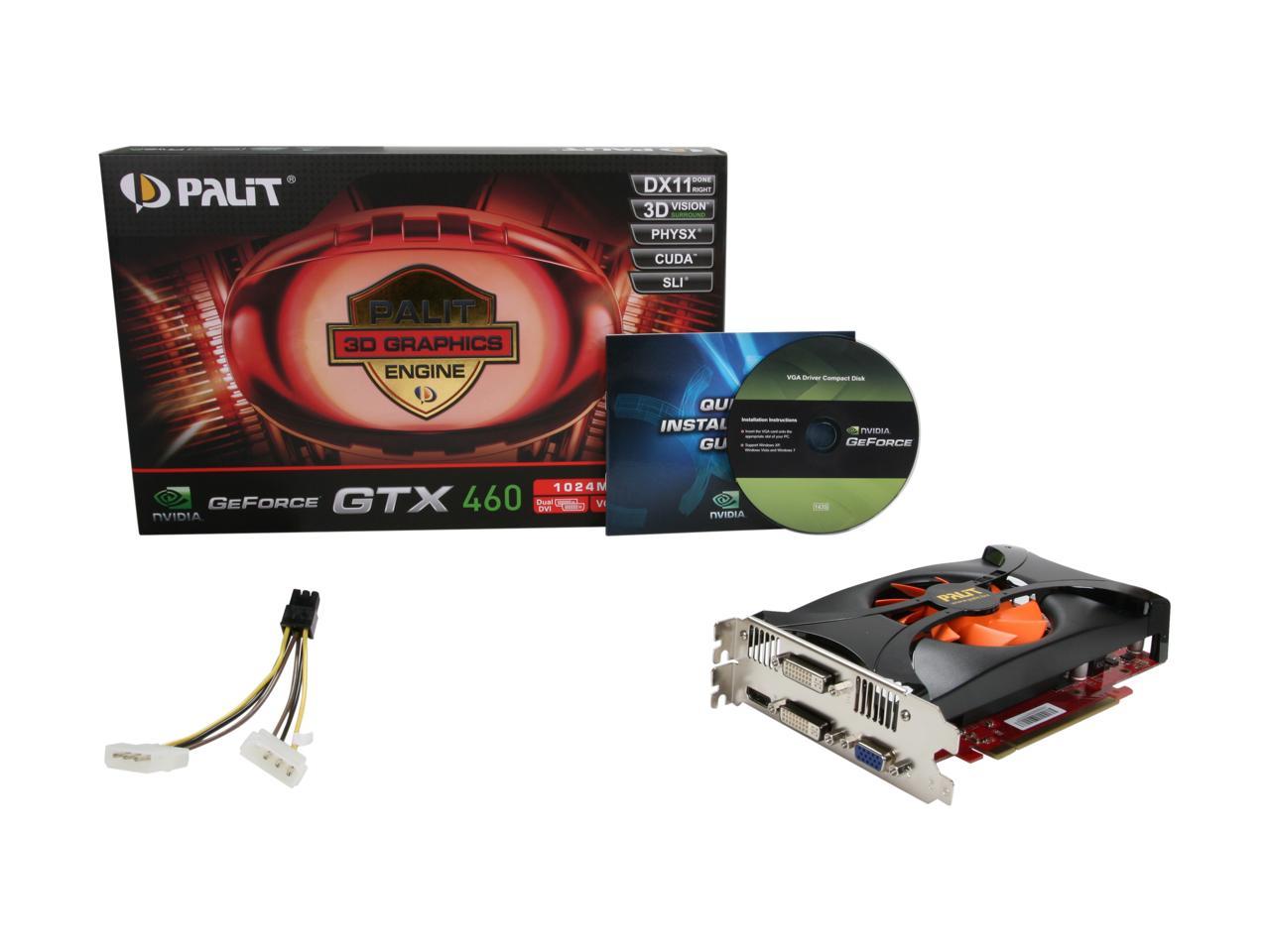 (89) Write a Review
OUT OF STOCK.
Specs
Reviews

Pros: This thing is pretty fast. I got it as a go between upgrade from a GTX 280 until I build my next system. It plays most everything about the same or smoother, which is what I expected.

Cons: The specs say core clock of 725 MHz, but every software program I use shows it at 700 MHz (Precision, Afterburner, GPU-z). I don't necessarily have a problem with it, but I did pay for those 25 extra MHz and didn't get them. If it clocks past 800 MHz, then I'll re-review and give 5 eggs.

Overall Review: I'm generally happy with my purchase and glad that I picked it up opening day. My plan was to eventually use this bad boy as a physics card anyway one day.

Pros: Excellent card--especially for the $205 I paid on sale. Night and day quieter than my GTX260. Much smoother gaming on Battlefield Bad Co.2, with more eye candy. Easily overclocked to 880MHz, but so far have not gotten it to remain stable any higher--probably won't bother either. I bumped my voltage to 1.085, but it would not go any higher. Use Afterburner to overclock and overvolt, but be sure to download the latest version that supports the 460. Also use Kombuster to "burn in" the card and stress test for stability. Temps are very low in desktop mode (30-32 deg.!!!) in my Antec 900 case. They hover in the upper 60s for BFBC2. I have the fan cranked (via Afterburner) so that it stays at about 40% until about 40 deg., then curves to about 20-25% higher than corresponding temp. At 70 deg., I can just start to hear the fan--which makes it way quieter than my GTX260.

Cons: The aluminum heatsink. However, note that as far as I can tell, this is the STOCK heatsink found on all reference cards--so it isn't as though you are getting an inferior heatsink per se. It would have been nice to get heat pipes along with the heatsink though. However, I can't say it caused any problems though (see my OC results, above). The "free" StarCraft 2 "game" is kind of a slap in the face (but this is an NVidia thing, not a Palit thing). It is kind of like having someone bragging about giving you FREE napkins at a McD's. The time it took to take it out of the box was a waste IMHO. I would feel guilty even selling it to someone for the cost of a postage stamp.

Overall Review: I must have gotten the latest bios, because when I installed the latest bios patch from the Palit website, it said I was already current. To increase headroom: DON'T bother overclocking the RAM. My memory usage in BFBC2 never went above ~500MB (with 1080 monitor, and 4x AA), and my memory controller hovered in the mid 20s-30% utilization (monitored via logging on GPU-Z). This means any RAM OC is wasted, and only contributes to greater heat. I tried to underclock, but can't go below stock. This also makes the lack of heatsinks on the RAM kind of a moot point as well.

Pros: Smallest GTX 460 you can buy right now so the Palit cards are nice if you can’t fit big card in your case.

Cons: The fan is loud and the heat sink is just a hunk of aluminum, the reference design actually has a much better cooler. Also, my card was not clocked as advertised but that is not a big deal as most people will be playing with their clock speeds anyway.

Overall Review: If you really do not have the space for a larger card, get the Sonic Platinum, it has a much better heat sink. Otherwise, there are much better cards here on Newegg. Thank you Newegg for the no hassle RMA. Palit shame on you for putting such an awful cooler on a “sonic” edition card, this has been the first and last time I will try one of your products.

Manufacturer Response:
Dear Bikermatt, We can assure you our product is top notch. If you did overclock then you must have did the voltage incorrectly. If you need assistance with overclocking. Please call us at 1-877-934-7932. Choose Option 4. Thank you for your feedback. Palit's Specialist
Jared T.
Ownership: 1 week to 1 month
Verified Owner
Good but not great7/29/2010 12:05:10 PM

Overall Review: I bought some heat sinks for the VRM in attempt to keep the fan speeds down but it was to no effect. Fur Mark puts the temp to 82 degrees at full load. I took the heat sink off to see what kind of thermal paste was used and it was rather high quality and when I repasted it with my own paste it still resulting in an 82 degree max. The heat sink gets the job done but is still rather small and would have been nice to have a larger more absorbent one, maybe then fan noise wouldn't be so high. the card is silent unless gaming and when gaming you have sound so the card noise is not a big deal in the slightest unless your an A**hat who needs complete silence.

Pros: Card is great, this thing really screams especially overclocked to 850/4110. Newegg got it here fast order day of release and got here in 3 days.

Cons: Horrible bundle , comes with the card, driver cd, and a molex to pci-e adapter plug. Not even one dvi-vga adpater in there. My monitor is used for my tv and my pc and the cable box uses the dvi connection. The day after I ordered they added just cause 2 free. Why was this not a release day freebie? Dropped a Egg for this!!

Overall Review: But running this thing since I got it and its been playing everything without a hitch. I can't wait till I order a second one for Sli Although I will prob not be getting another Palit card. I only bought this one because Evga has not come out with there 1gb cards yet.

Pros: The GTX 460 1GB has some processing power and gets better with overclocking. Several reviewers found that in real world games, the overclocked GTX 460 1GB can take on the GTX 470. Some overclocks have hit 860 - 865 without voltage increases.

Overall Review: The installation went great and the newly released Nvidia driver installed without a problem. Windows 7 64 experience index is 7.4 for both 2D and 3D.

Pros: Performance: Fantastic! When I had only one card, I could max all settings on Starcraft 2, FFXIV, Assasins Creed, Star Wars TFU2, etc... FPS stays well above 30 FPS. I later bought another to SLI just to be ready for tesselation (DX11) as that requires more GPU power. Overclockability: Cards come stock 700/1400/1800. I bumped them up to 800/1600/2000 and they run flawless with temps never exceeding 65C under full load. SLI: Both cards in SLI and it rocks the pants off the Unigine DX11 benchmark. Final Fantasy XIV, Mafia 2, Asassins Creed, Star Wars TFU2, and other software @ 1920x1080 w/AF16x and AA8x runs flawless. Even using a single card ran the games fine. Size: Both cards fit in my MSI P67A-G45 motherboard without blocking the SATA ports. This card is the smallest GTX460 out there!!! The MSI motherboard I mentioned is 1 inch smaller than the standard ATX size also.

Cons: Temps: The only con is the temps without using a fan profile from MSI Afterburner or similar program. Fans: As for the fan problems I am reading about, don't push your fan to 100% and watch for wires that are hanging around your computer case. I haven't had any problems but if the fan blades are as weak as I am reading, I would say just tuck the wires away in your case and make sure nothing can obstruct the fan blades path.

Overall Review: Card idles @ 35C-40C. I don't like that. Under full load it hits 70C. I don't like that either. Although other forums says this is normal and is no big deal, I prefer my card to idle < 35C and under full load < 65C. I'm an electrical engineer and understand that those temps are below the rated temps for the card but I would like my cards to last a long time. After modifying my fan profile in MSI Afterburner, the card idles @ 30C +/-3C and stays around 55C +/-5C while gaming at 1920x1080 with max settings on all my games. My profile is as follows 55% Fan Speed @ 35C 65% Fan Speed @ 55C 75% Fan Speed @ 65C No need for 100% fan speed to keep cool like other cards!!! 2 GTX 460's in SLI does not perform well on Starcraft 2 atm. The game runs perfect without SLI but it is annoying that I have to disable SLI everytime I play this game. Nvidia and/or Blizzard, please resolve this issue.

Cons: Started getting artifacting in 3d games about 3 months in.

Overall Review: I originally gave this a positive review, however the many negative reviews about this card are correct. Save your time and money and avoid this card. I will never purchase Palit again.