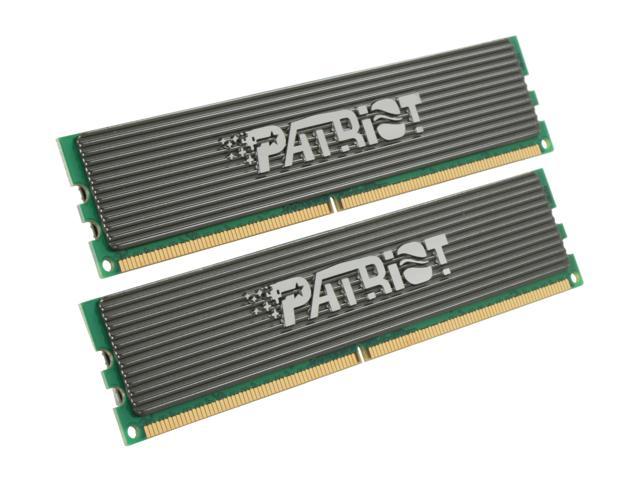 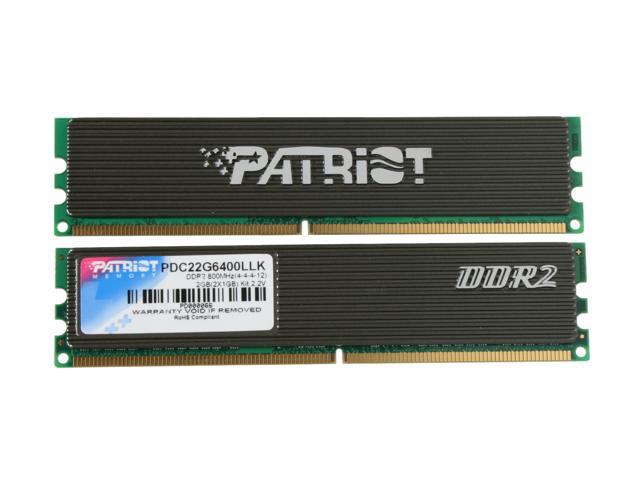 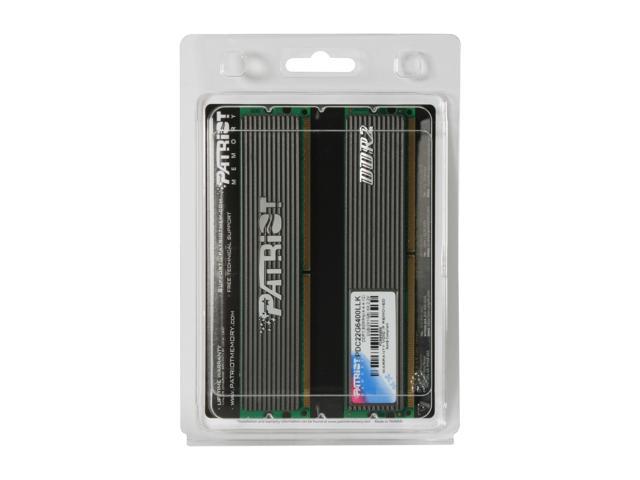 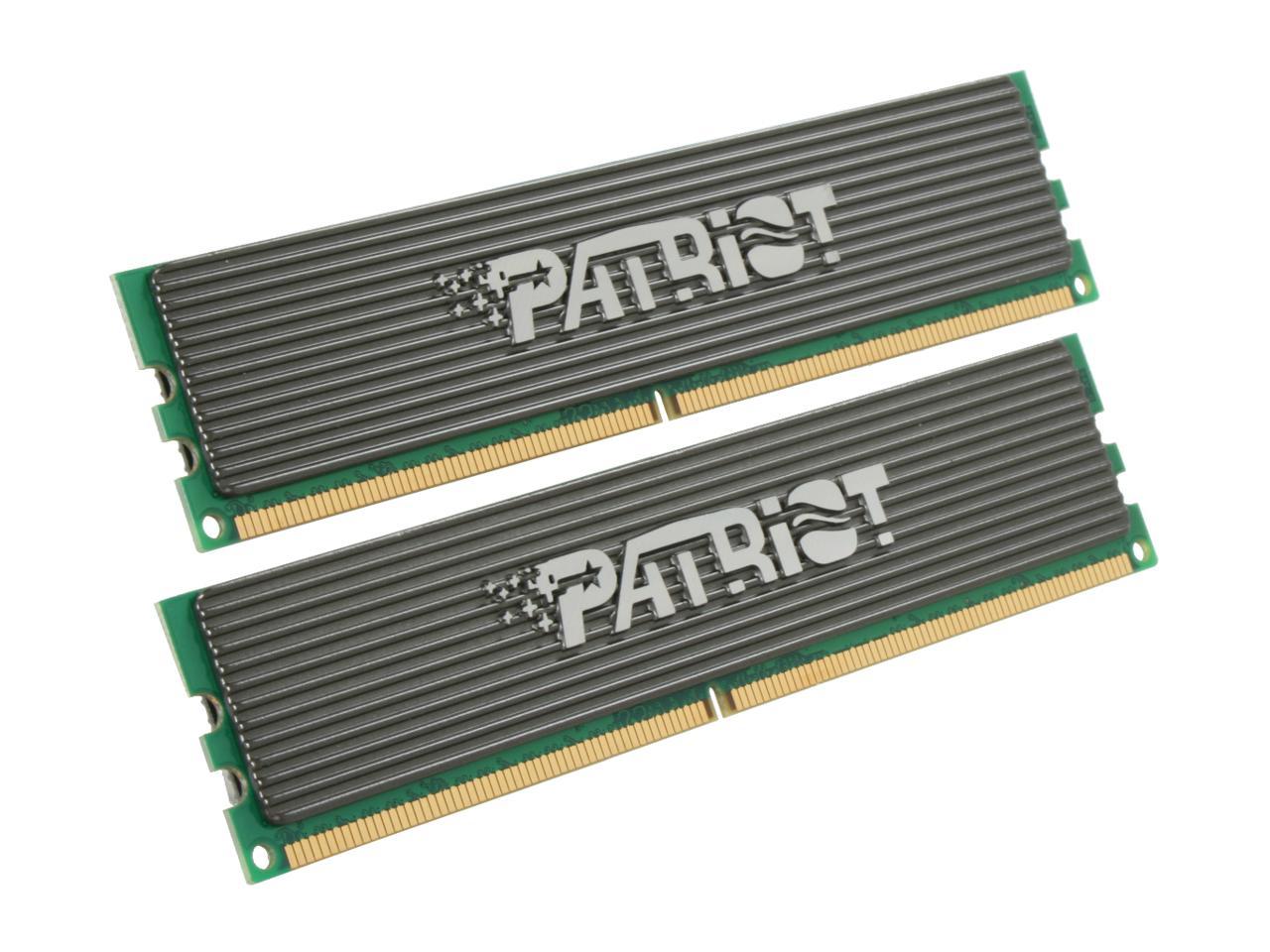 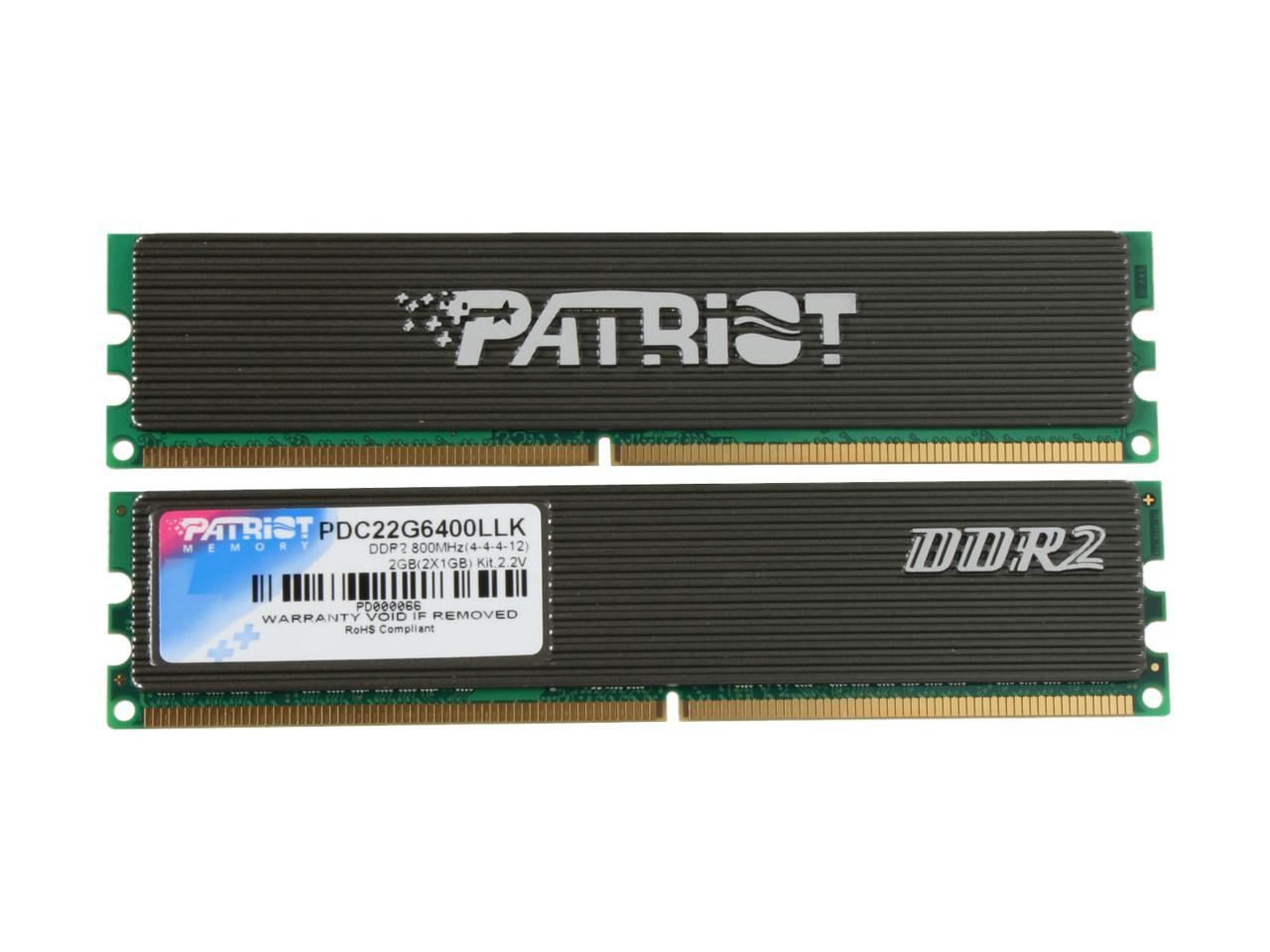 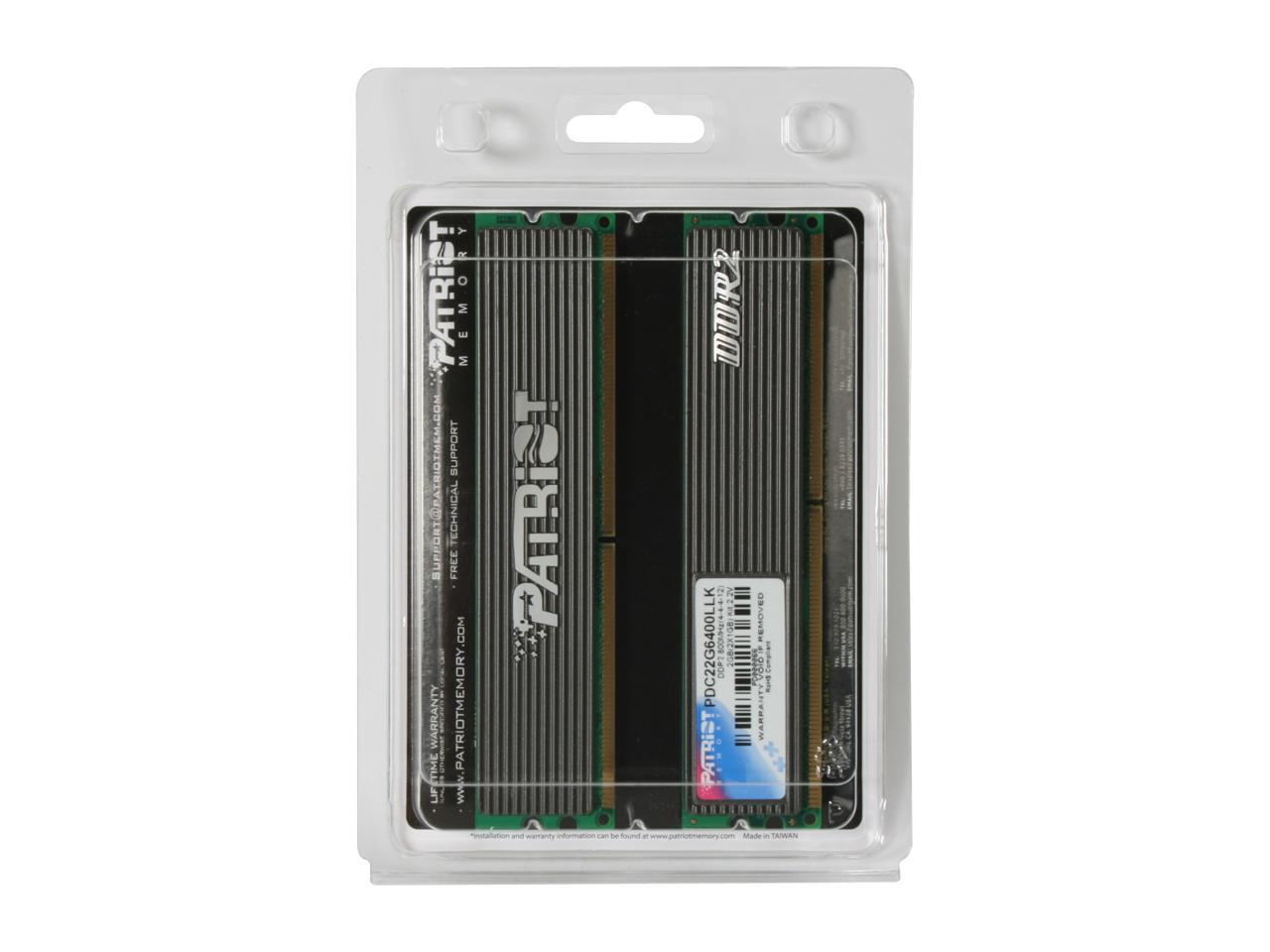 (773) Write a Review
OUT OF STOCK.
Overview
Specs
Reviews
Awaken your sleepy PC or build your own system with the Patriot 2GB (2 X 1GB) 800MHz DDR2 SDRAM Dual Channel Desktop Memory Kit. As one of the hi-tech industry’s most trusted manufacturers of memory, Patriot crafted these 2GB dual-channel low latency sticks for the overclocking-, gaming-, or PC-enthusiast in mind. With an easy-to-install design and responsive 800MHz processing speed, expect blazing performance out of this jet-black pair of memory sticks.
Part of Patriot’s Extreme Performance Series, the kit is qualified on both Intel- and AMD-based systems. Expect pulsing time latencies from this duo each and every time without failing, melting, or burning due to the premium heat spreaders that deflect thermal energy away from the sticks’ cores. Don’t compromise value for increased performance, get them both, and give your PC a major 2GB lift!

Cons: The Cons: I think that the PC2 8500 memory is dropping in price so it may pose a challenge in pricing. This is still very solid memory and a bargain with a good rebate option. Heck, save the $$ and get 4 sticks (4GB) to run your new Vista Ultimate 64-bit install like I did.

Overall Review: For a Vista system these days - 4 GBs is almost a given. Don't skimp on memory - well worth the investment with a well known brand like Patriot.

Pros: I bought this memory to go with my EVGA 680i MB and E6600 proc and everything runs great at 4-4-4-12 timings with proc oc'ed to 3.2 GHz. Best bang for the buck memory in my opinion, gets the job done reliably without breaking the bank. Looks good too.

Pros: Been running this memory for 3+ weeks now and it has been rock solid stable, even during the times where I ran it at 1000 Mhz.

Cons: Price drops since I bought them.

Overall Review: I normally buy Corsair and Kingston brands. This is my first time buying Patriot. I'm quite satisfied with the experience.

Cons: One stick died, but--for those of you new to the DIY scene, about 5% of computer products ship with problems, so a dual-stick package stands about 10% of having a problem, simple math--that's neither the fault of Newegg/(other e-tailer) or Patriot.

Overall Review: These sticks--like every DDR2 stick on the market to my knowlege--ship with JEDEC standard SPD settings of 5-5-5-(15 or 18) with 1.8v, so you need to know a) how to add voltage to your RAM, and b) how to set the proper options [this is the same process as over-clocking] for your RAM as well, and know--what--settings to change. If you don't know how to do these things: learn, or buy something that isn't low latency.

Pros: Excellent product that works as advertised. I got the $50 rebate offered in March, 2007.

Overall Review: I have a love/hate relationship with rebates. They are undoubtedly a ridiculous way to reduce the price of the product and manufacturers bank on the fact they only payout about half the time. Some fraudulently reject applications for any reason. I purchased this RAM on March 10, 2007 [just before DDR2 prices crashed through the floor] and paid a little over two Benjamin’s with a $50 Patriot rebate. I got the rebate on May 9, 2007. It was not clear which label was “the original UPC found on the memory product packaging” so I included both. I would dog Patriot directly to find out why your rebate(s) were rejected. Their manufacturing facility is located in Fremont, California USA, the phone number is 510-979-1021.

Pros: None. The company stinks

Cons: My Gigabyte p35-ds4 has post problems with them. I set the volts up to the 2.2 and 4-4-4-12 still no better. Switched them out for Crucial sticks and now no problems. Crucial Rocks

Cons: One stick failed after 6 months, was replaced with another Patriot Extreme Performance 2GB set. I have open RMA with Patrion Memory and sent it for replacement. (It should be lifetime warranty)????? Here is the Mail from Patrion RMA dep.: Upon receipt of your RMAT-743873(PDC22G6400LLK),one of the kits has bent We can only replace memory if its defective, we can’t replace if its user damage, this one is consider as damage. We are going to send this back. Apologize if we are not able to replace it.

Overall Review: Here is my response: I have sent to the "Patriot" my PC memory .... What you mean "bent"? I'm not use my PC memory as a Hammer or screw-driver ... !! I'm professional senior system engineer in one of the High-tech companies in Boston over 10 years. Believe me, I know how to install memory to the PC. Which I have made, is only one action, it have pulled out it from my PC packaged and sent it to you !! By the way I still have additional 4 GB of "Patriot" memory which is still working, but As I shall look, not so long if to compare to others memory brands. In any way you can do what is you need to do.

Cons: I bought a set of this RAM with a new build and got a bad Dimm. I've usually been pleased with Patriot RAM, but these things happends. However, when I ordered a replacement and sent the other sticks back I actually got another set that was DOA. These things happen, but 2x in a row! Right now I have a brand new computer I cannot use because I have to again wait for more replacement memory.