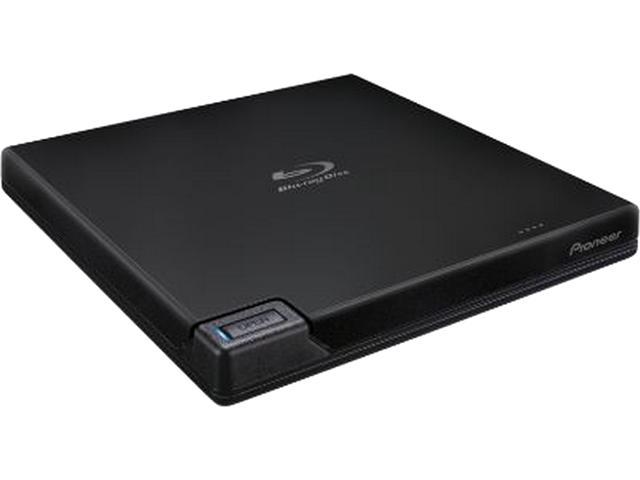 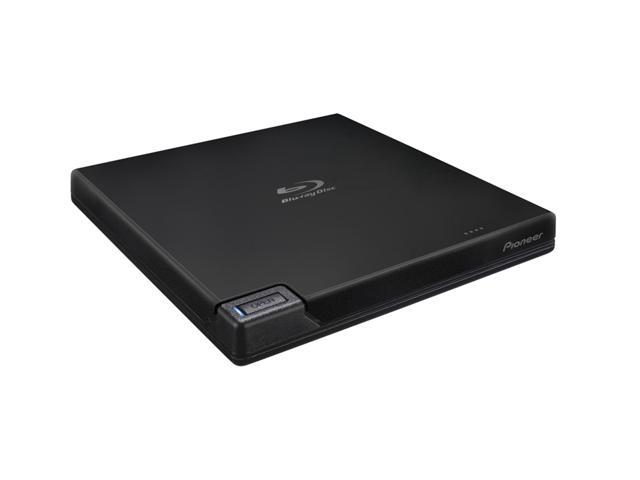 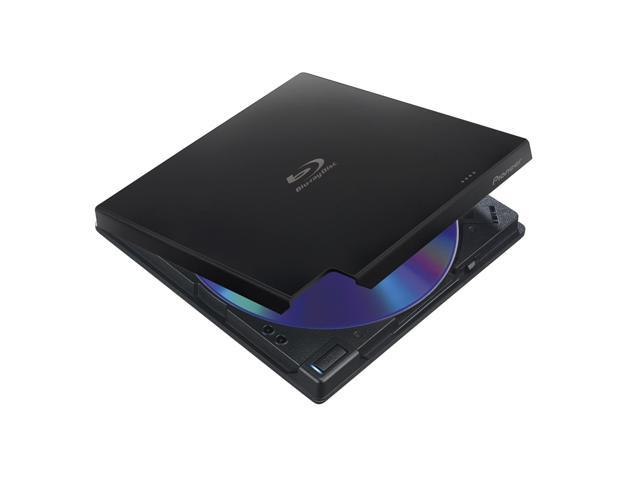 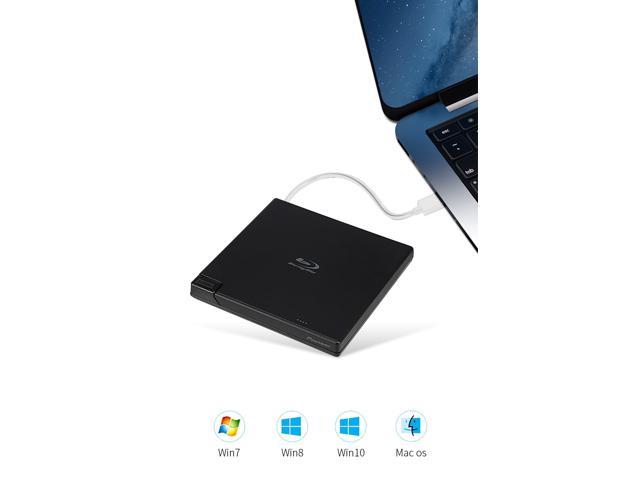 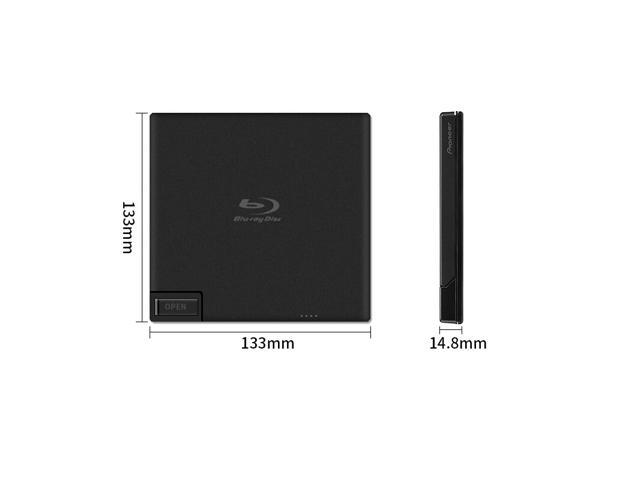 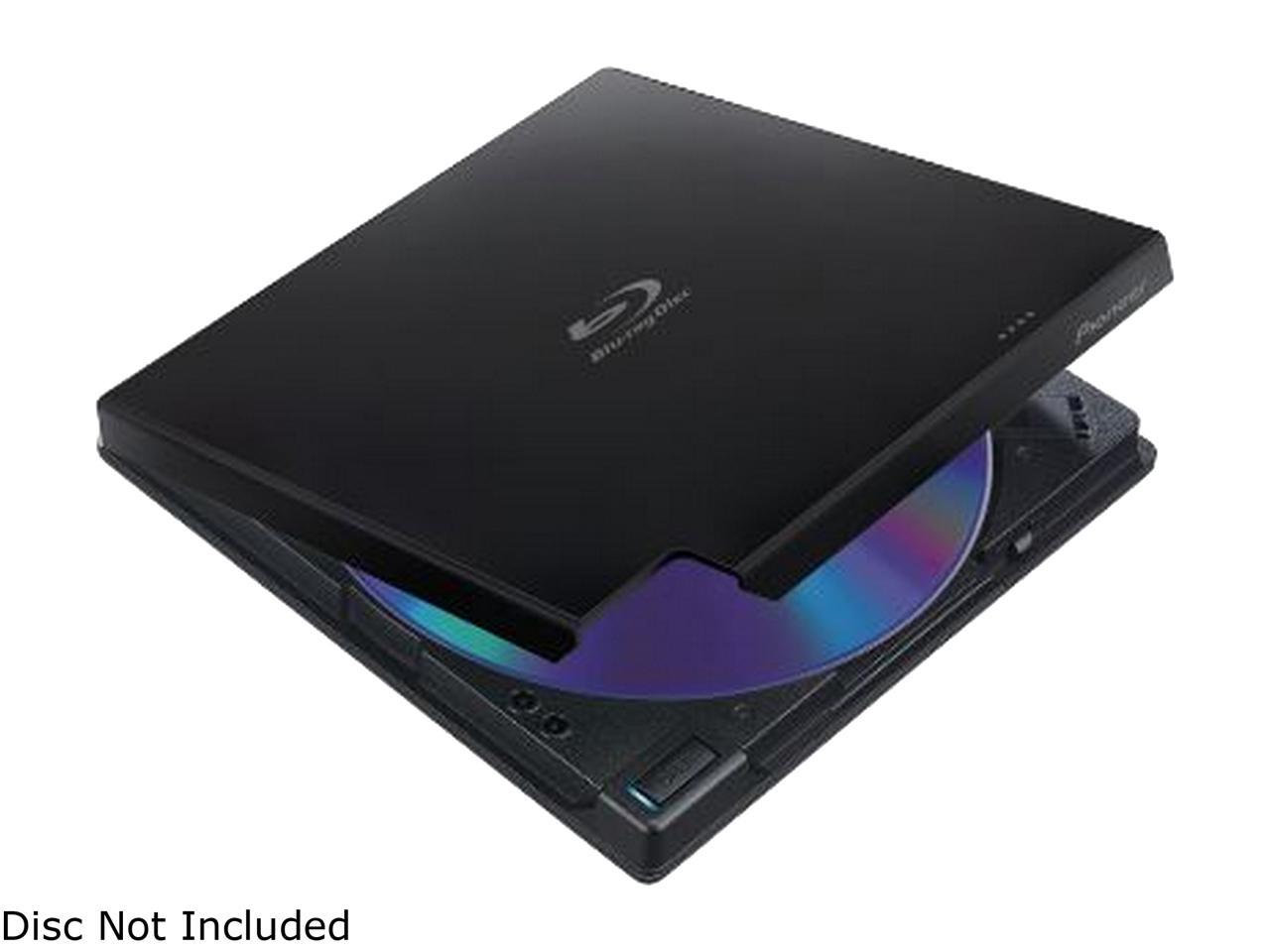 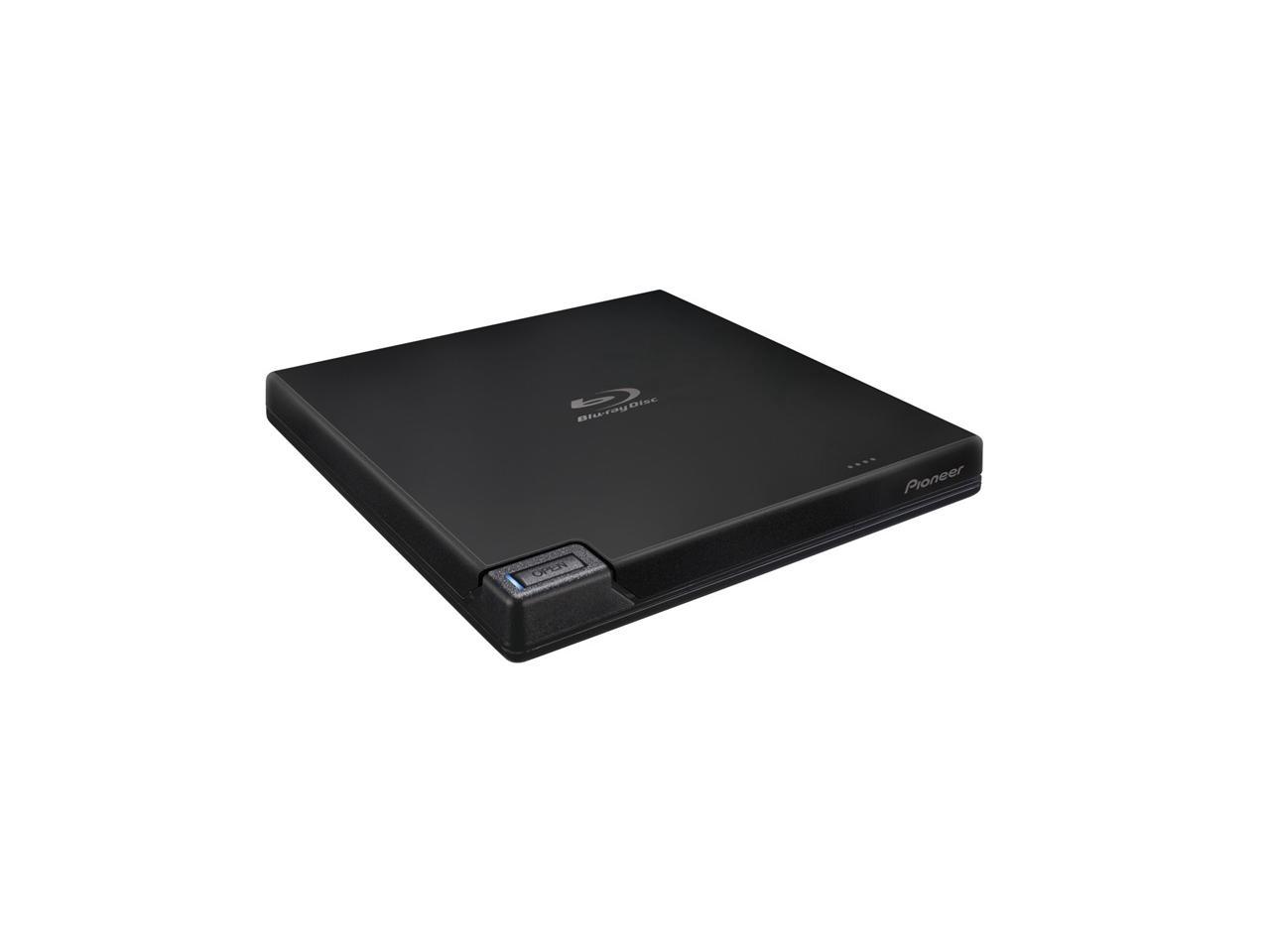 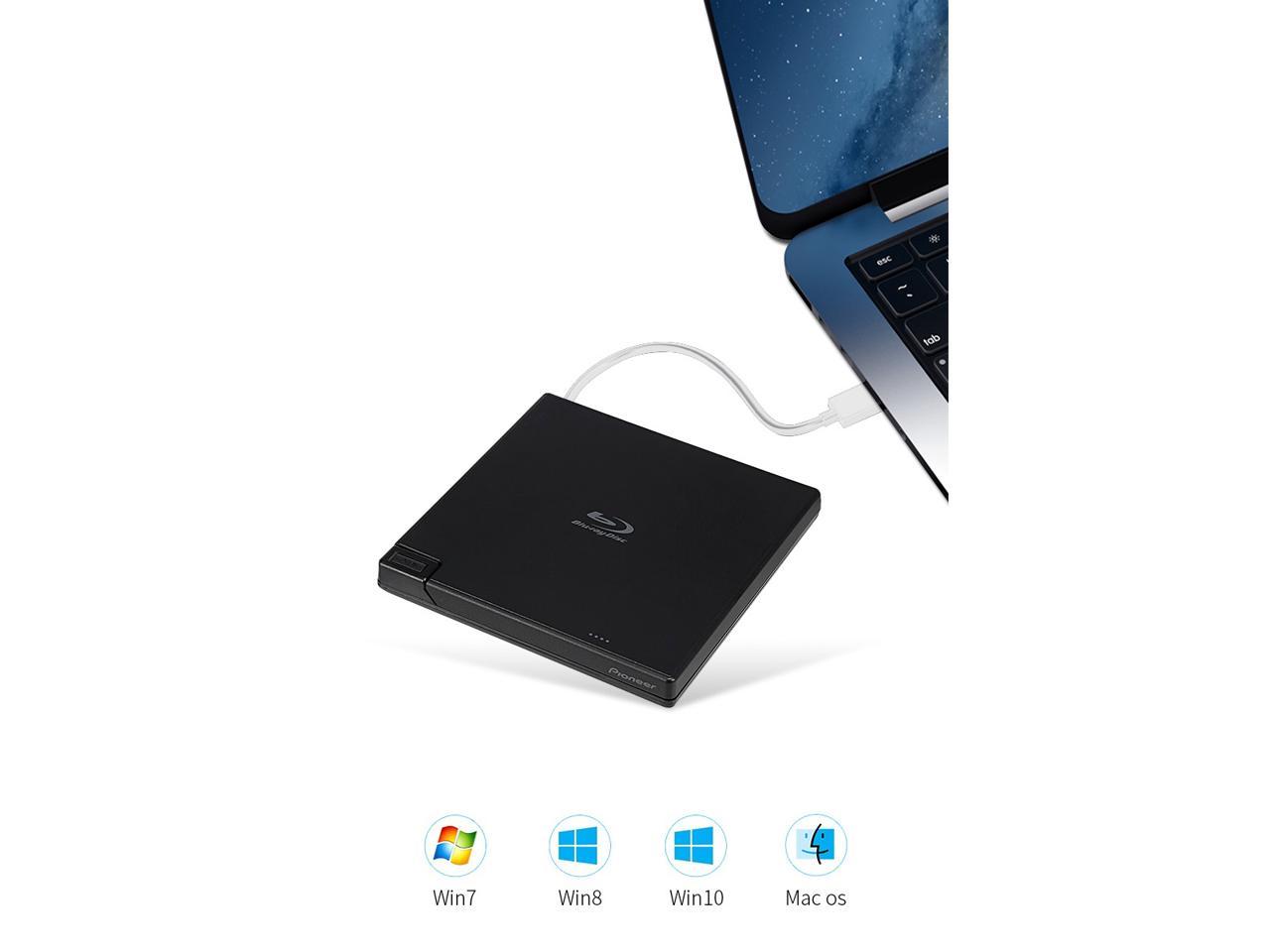 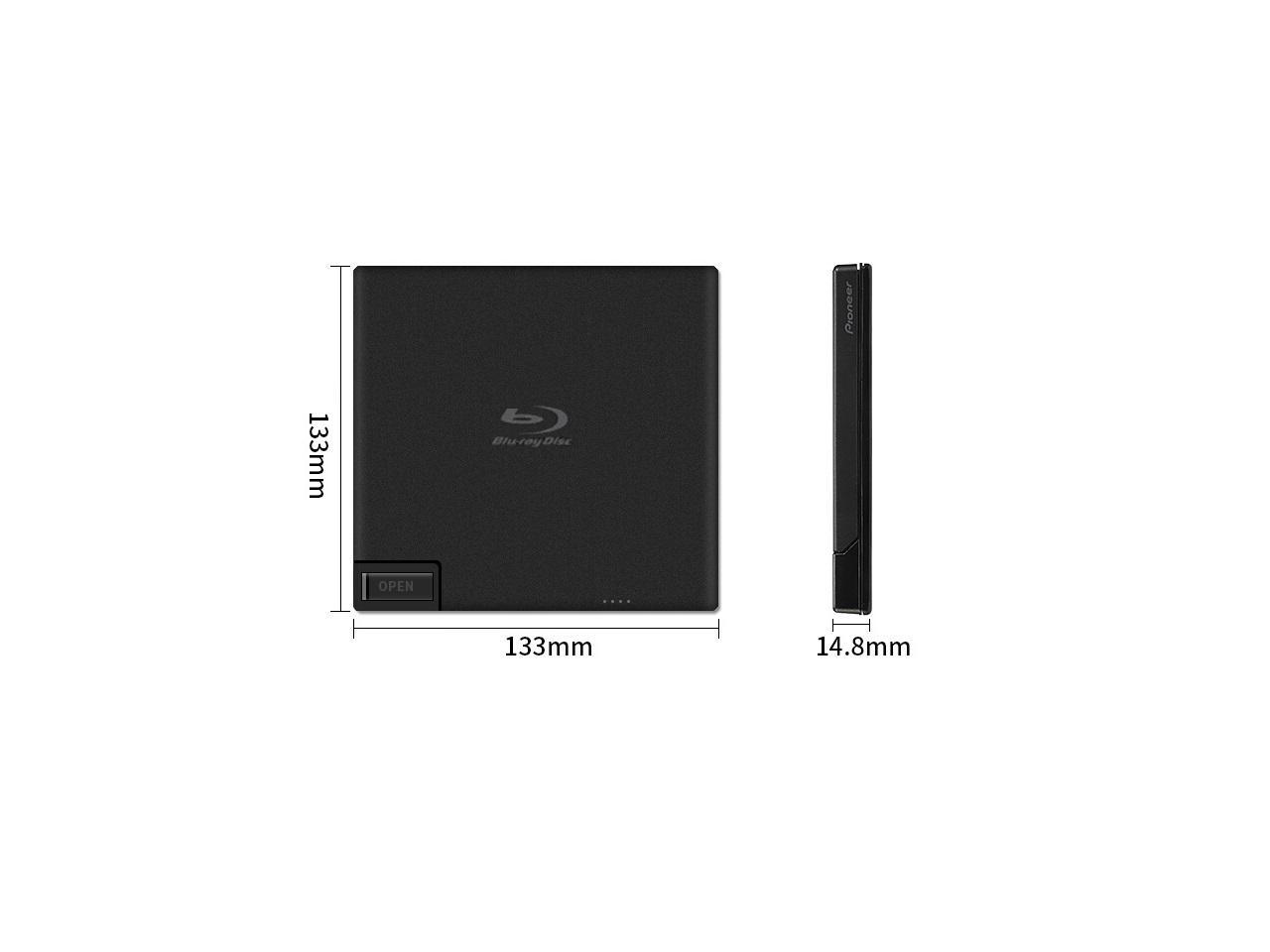 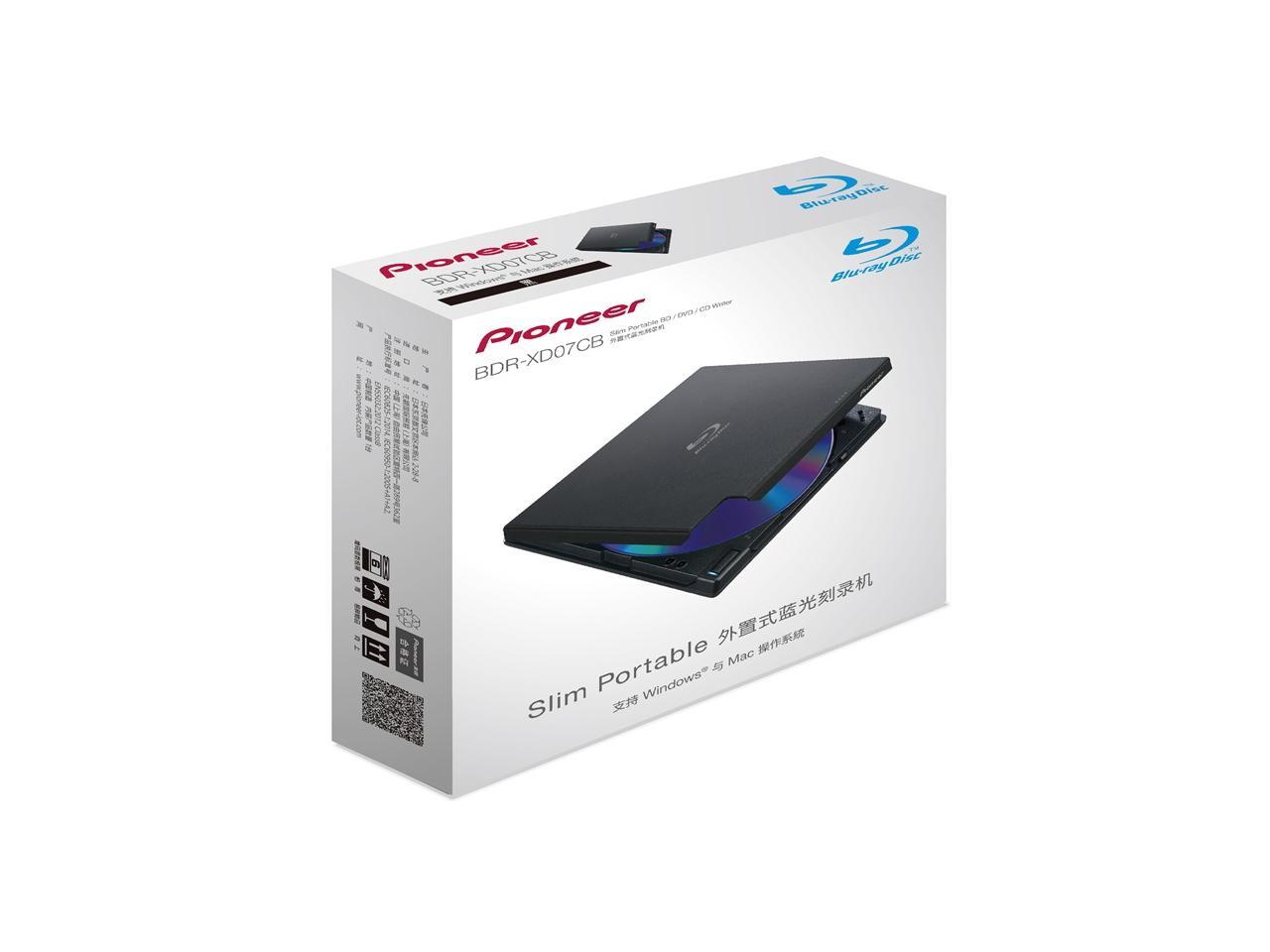 Today’s ultra slim premium laptops deserve a matching optical disc solution. The Pioneer BDR-XD07B is a choice second to none. It reads and writes BD/DVD/CD fast, and supports M-DISC and BDXL. When user plays back CD or DVD with obscured area, scratches or fingerprints, it will reread or skip to continue if reread can’t be performed. Clamshell type that enables the easy takein and takeout of a disc in a narrow place. 230g super lightweight and 133×133mm CD size compact body.

Scratches and fingerprints on your CDs can cause them to skip. A drive normally makes a calculated guess at the unreadable data and attempts to correct this to match the original music. However, this is not 100% accurate. PureRead3+, when enabled, makes the drive reread the obscured data to extract the original music as accurately as possible.

Pioneer drives with Auto Quiet mode, monitor how they are being used and adjust their speed automatically—high speed for data transfer, and low speed for music or movie playback.

Pioneer strives to have best-in-class performance over a wide range of media—our drives achieve this for a large variety of BD and DVD media. Refer to the drive’s media support list for all supported media and the write speed that can be achieved.

* Picture is only for demonstration. Disc is not included. Sold separately.

1. Triple and quadruple layer BDXL discs can only be used in BDXL drives.

3. PowerRead is not guaranteed to work with all disc conditions or under all PC environments.

Learn more about the Pioneer BDR-XD07B

Pros: Construction is better than other portable drives I've used. Instead of a flimsy re packaging of a laptop drive with the fragile tray, the clam shell top load makes the thing much more solid, which is good for a portable drive. Unless you sit on it or drop something heavy on it, it should serve you well for years. It plays DVD's and CD's just fine. I have burned a CD at this point with no issues. I haven't yet tried a DVD burn. It is USB 3 compatible.

Cons: Documentation is very poor. The little "emergency release" thing on the bottom is clumsy to use but it does work (this release is not documented). As long as its powered the top button works fine. Blu Ray operation needs software. The downloadable free software is big and doesn't work, it informs you to download a newer version, which is a pay version!

Overall Review: I got a new laptop which like nearly all modern laptops lacks an optical drive. I needed a portable one, so I opted for this because I had nothing to play a blu ray with. I've learned that Blu Ray is not as straightforward as DVD playing was. You need software. I'm not aware of any operating system that supports Blu Ray natively. Recent windows versions don't support DVD either. I started looking for free options naturally. Most of them did not work or were not stable. They might work on one of my machines but not another. Long story short, you will probably need to purchase software to do Blu Ray at least to play commercial disks (more later on that). Fortunately they all seem to have a trial period, so you can verify they suit your needs before purchasing. I'm not recommending since i found different hardware may work while others won't. I would say don't think about doing Blu Ray in windows without at least a core I5 processor. A high end graphics card might get you around that limit, but i don't know. You should plan on some experimentation before you start relying on it for Blu Ray. Ultimately remember Blu Ray got the nod not because it was best, but because it offered the best copy protection. The system requires that the player download code from the kisk to unlock the disk and play it properly. I think this is where the free software stumbles. Some codecs need to be licensed. If you are only using it to record and play your own home made Blu Ray disks, the free versions might work for that. But, again, plan to experiment!! Despite the Blu Ray challenges which would be true for any drive I suspect, it is a good clean well built drive and I'm happy with my purchase. I could not give it 5 eggs because of the very poor documentation. CH

Pros: Plays movies fine without any problems. Looks to be built well and has some weight to it. Made by Pioneer Fast shipping.

Overall Review: Got the software to install turns out Windows was installing a round of updates and was blocking this software from installing. Helpful hint make sure all Windows updates are installed before installing the Cyberlink software lol

Overall Review: Works with just the USB 3.0 cable (if your PC supports it). It reads/burns BD-R and DL just fine (haven't tried TL/QL as I don't have them), and you can download the cyberLink software using the activation code you find in the manual. Overall a great product, too bad it remains powered on when PC is in standby, and you need to shut it down before removing the drive.

Pros: Works good, Didn't know would work as well as it does

Overall Review: Built a computer. Moved it to a case without a 5.25 bay. Had to get a drive to play movies and such. This works perfectly so far. Works better than my built in one in previous case setup.

Overall Review: works great. usb cord is very short though, about 1 foot. would be nice if it was a bit longer

Pros: I have used this with the blue-ray and have many moments where I have moved it and have been used to expecting to slow down the speed when burning, but it handled itself with big data transfers without error.

Cons: I would recommend using the USB cord it came with because going with another may risk failure. I'm sure a good quality cable will work well. I just know that cables make a difference.

Overall Review: I would recommend this to anyone for secure travel and reliability in burning on the run. I'm happy with this and will forever be a fan.

Cons: No major cons after three months of use.

Overall Review: I would definitely recommend this burner to anyone who asks. If/When this drive fails in the future, I would replace it with the same product if available. The two minor changes that should be considered by the manufacturer is the USB cable and port should be USB-C and the cable should match the drive's color.