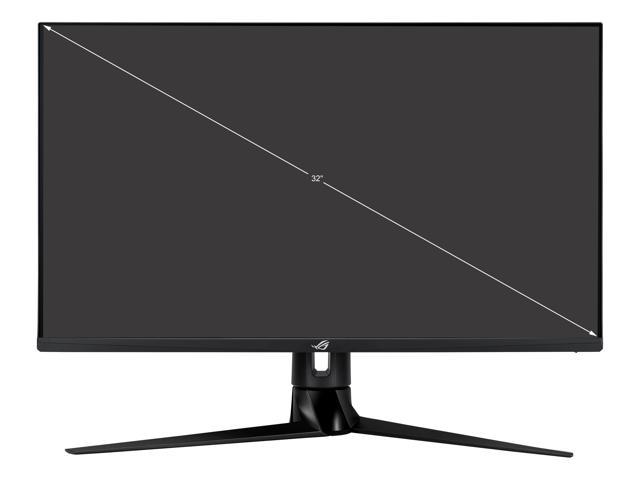 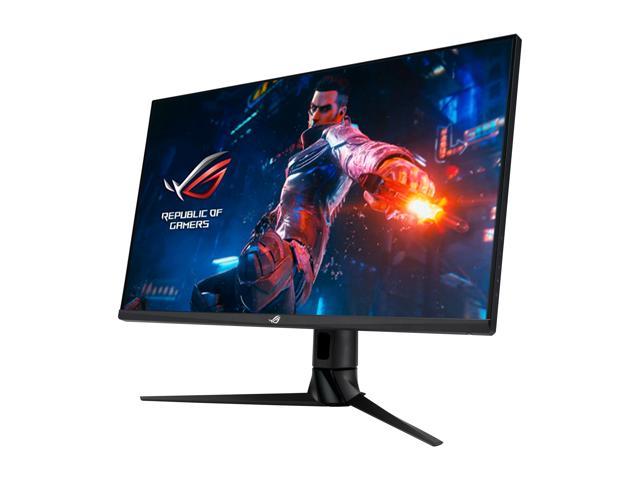 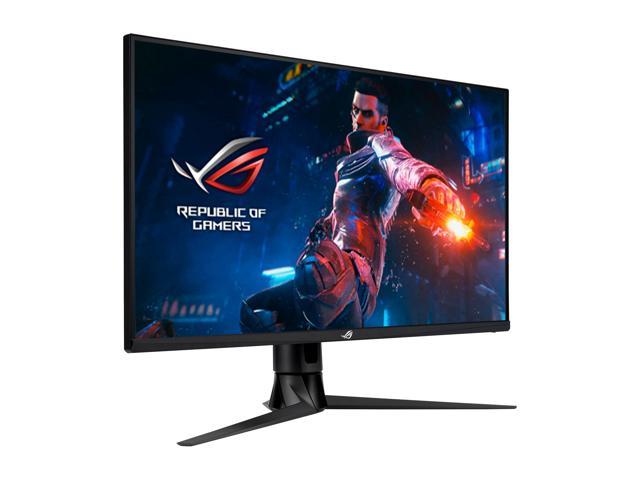 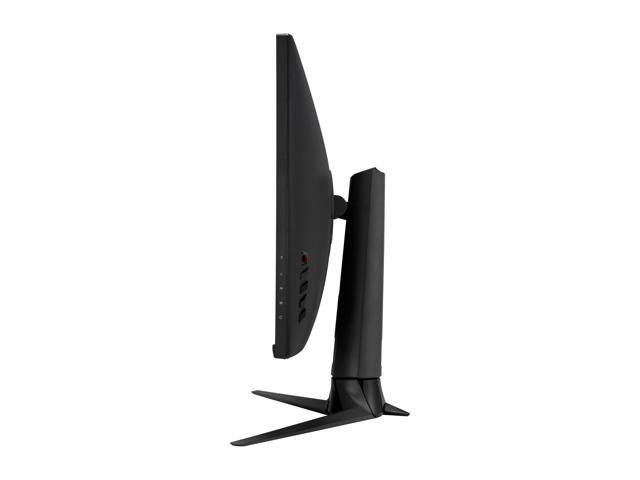 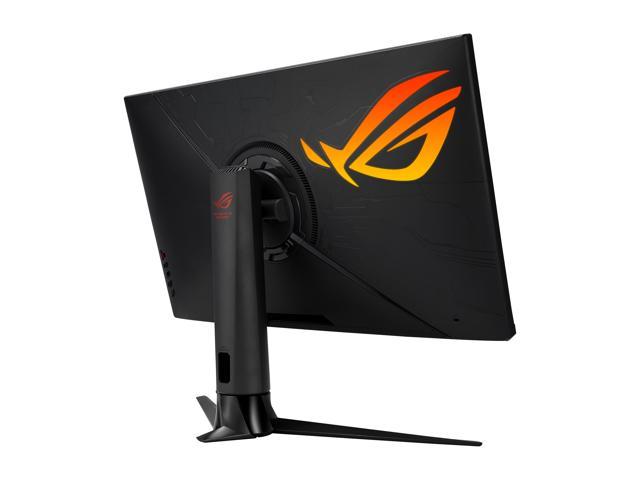 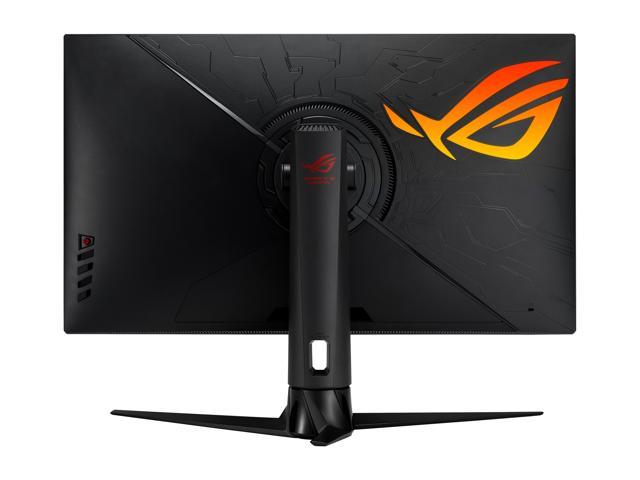 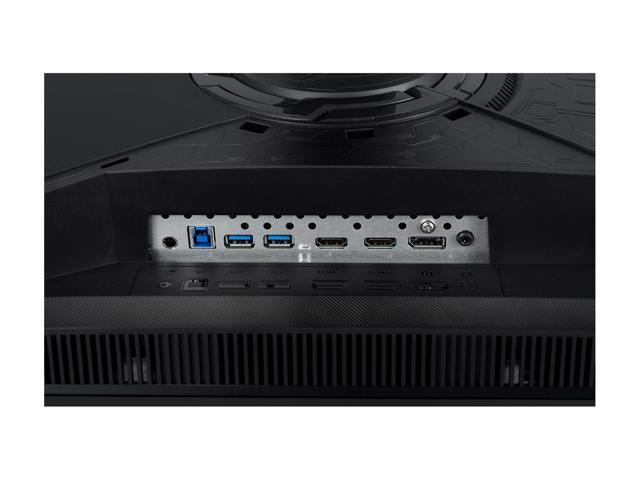 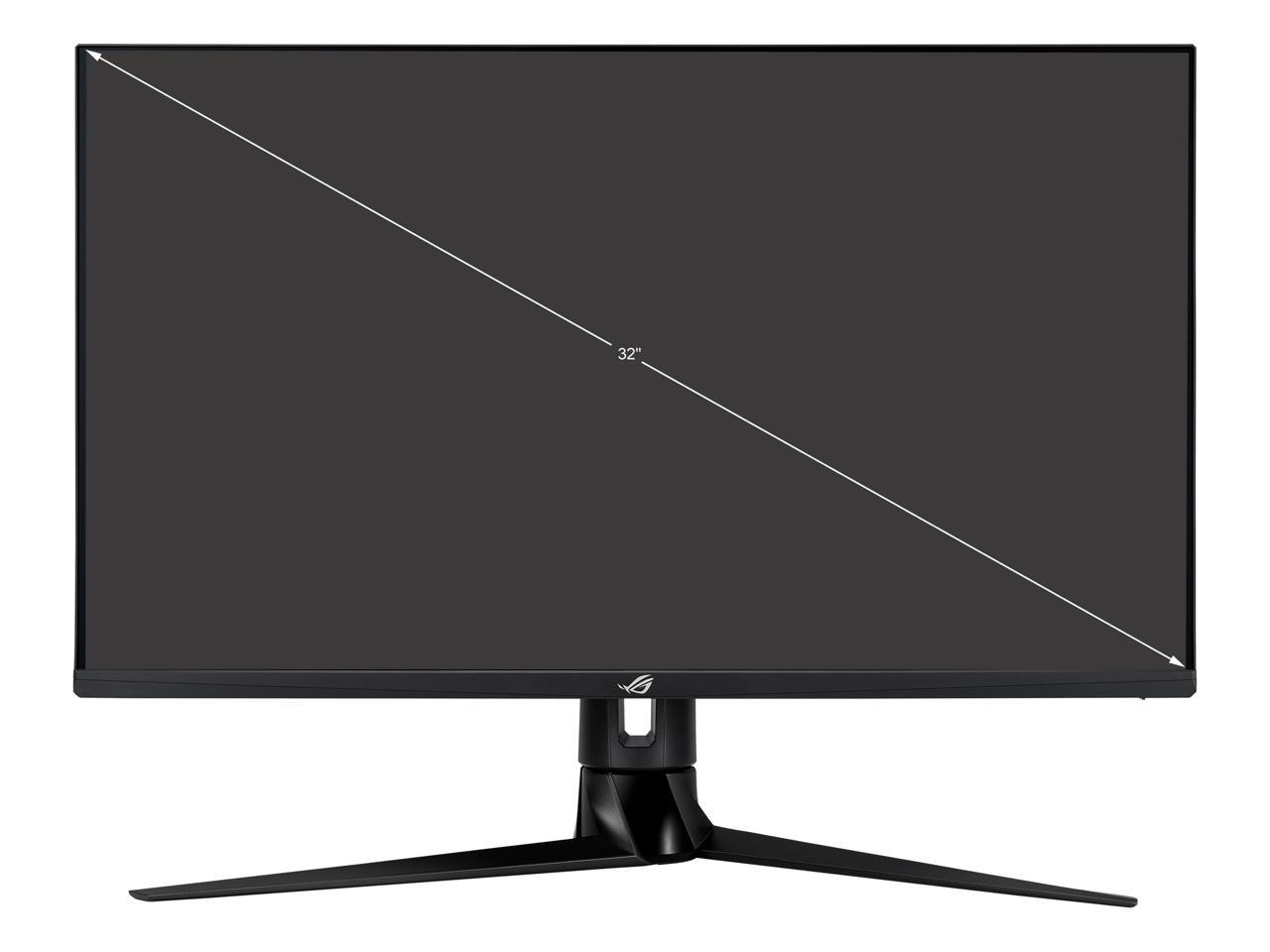 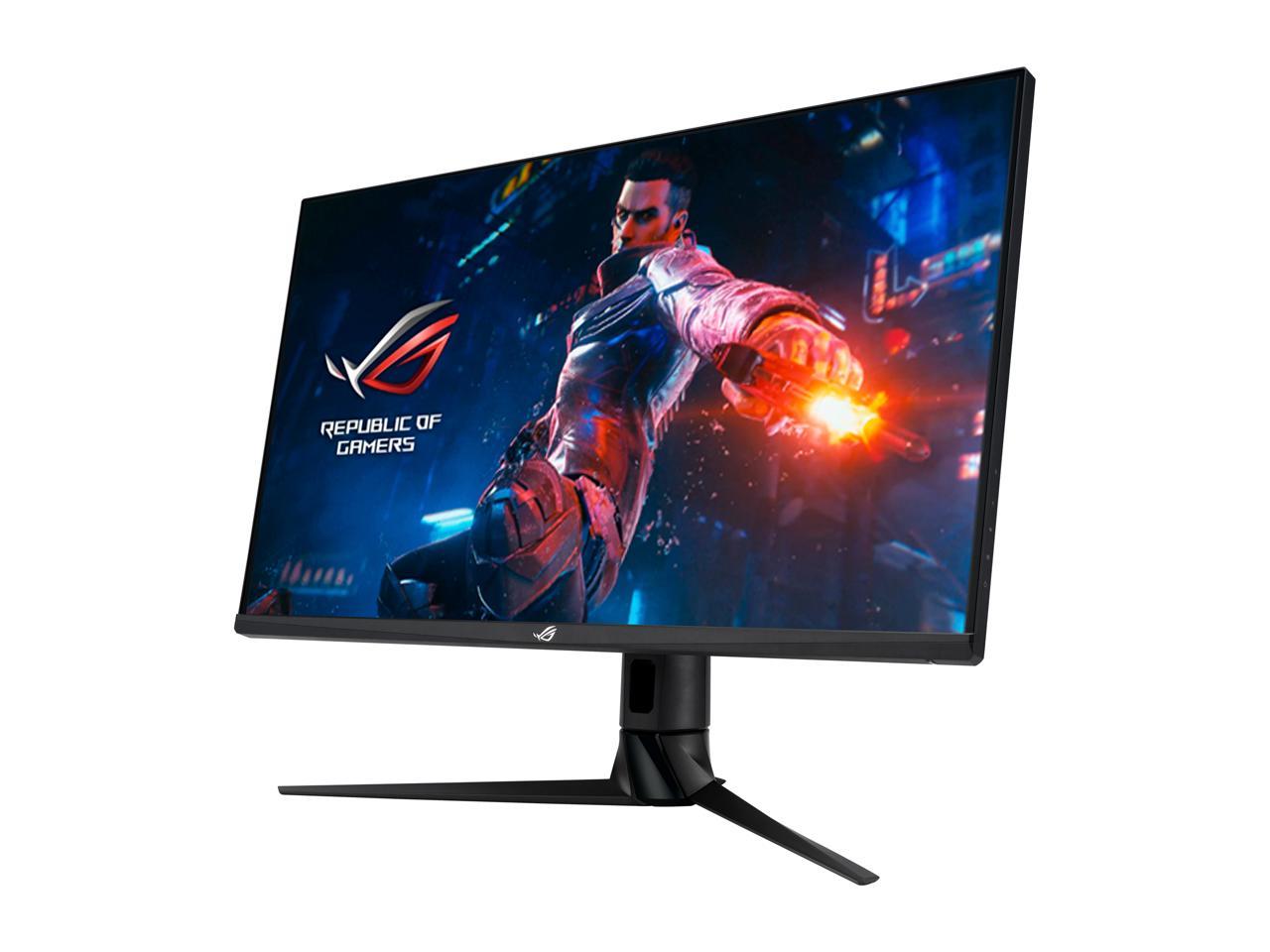 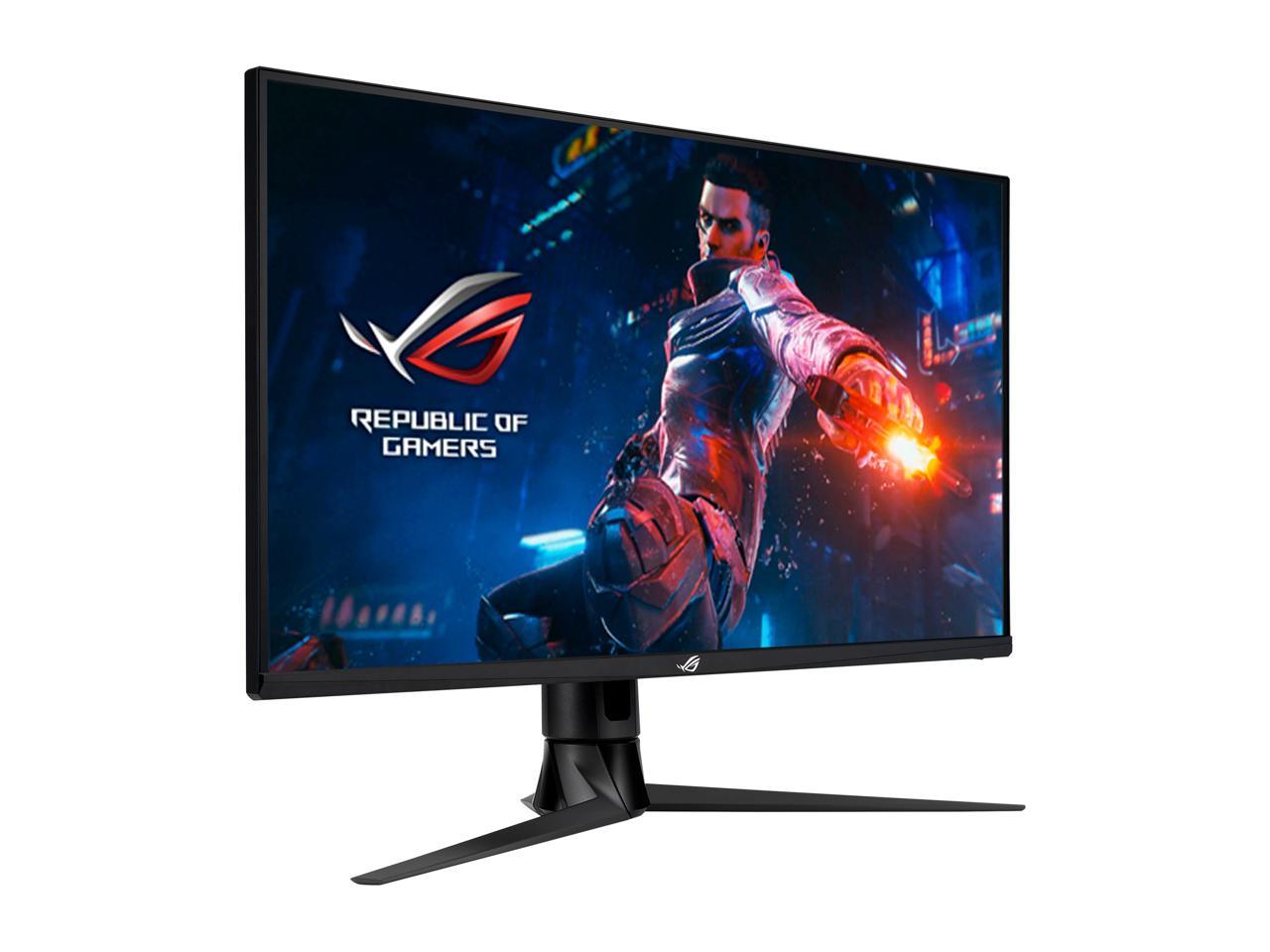 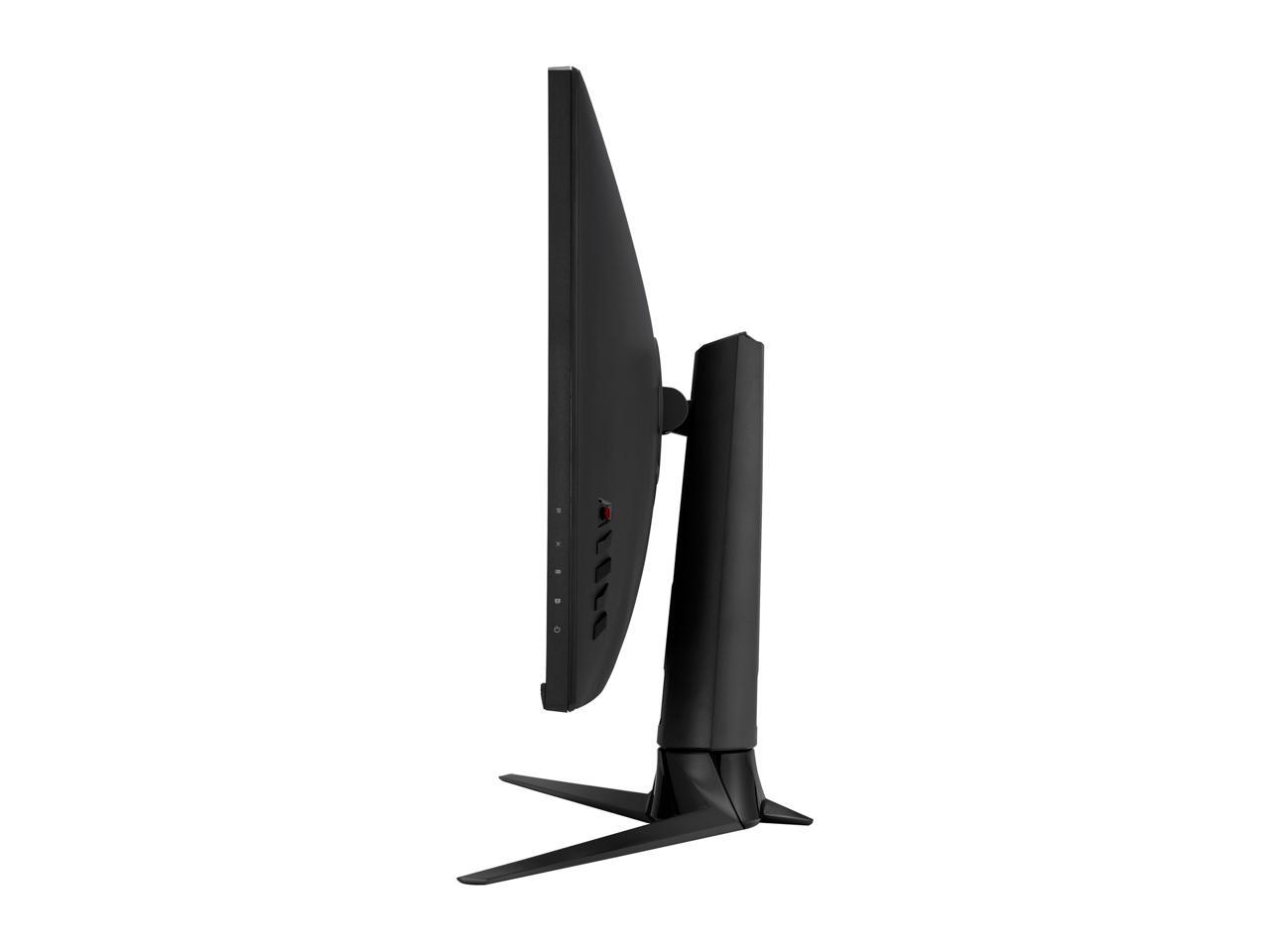 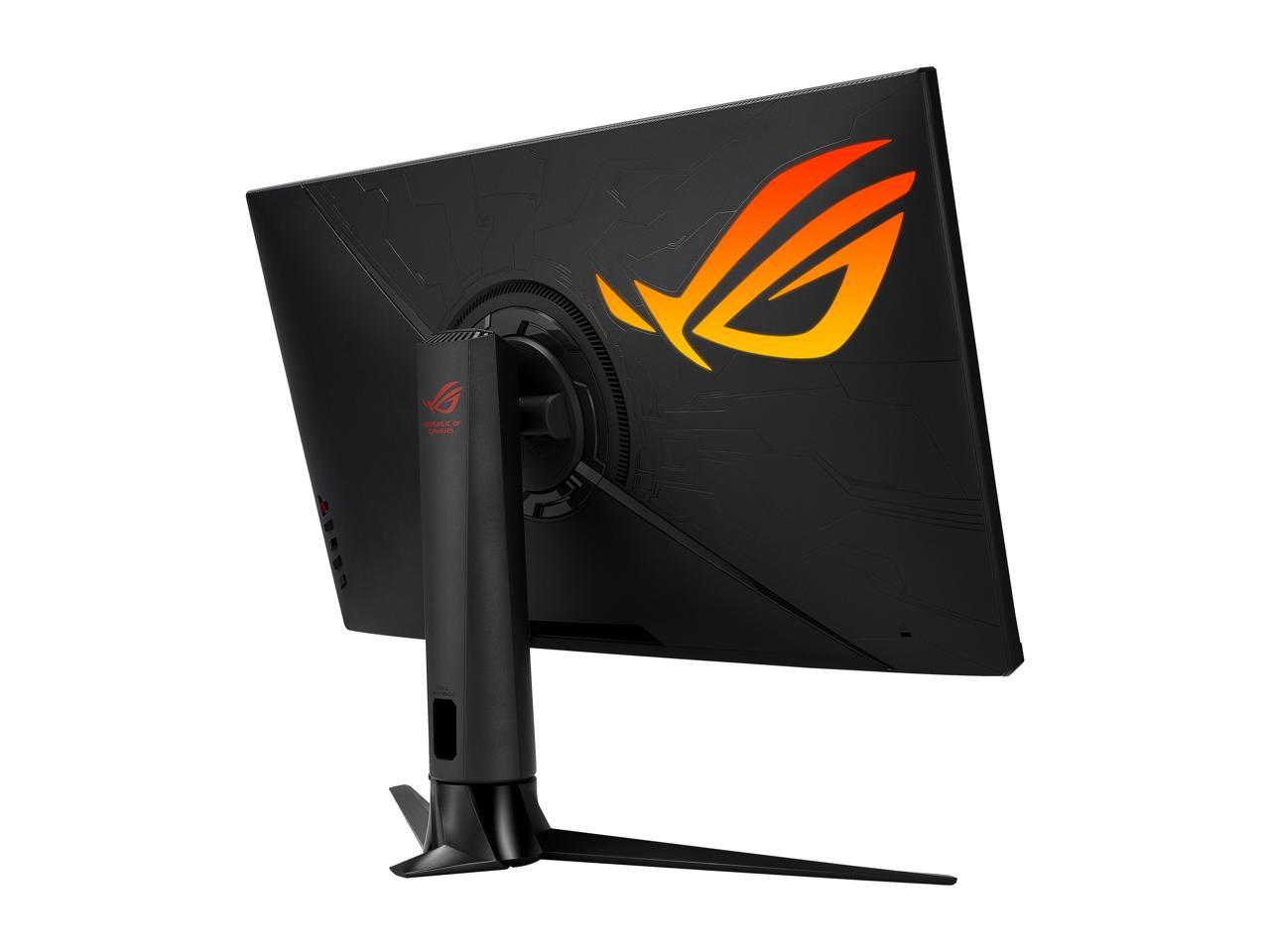 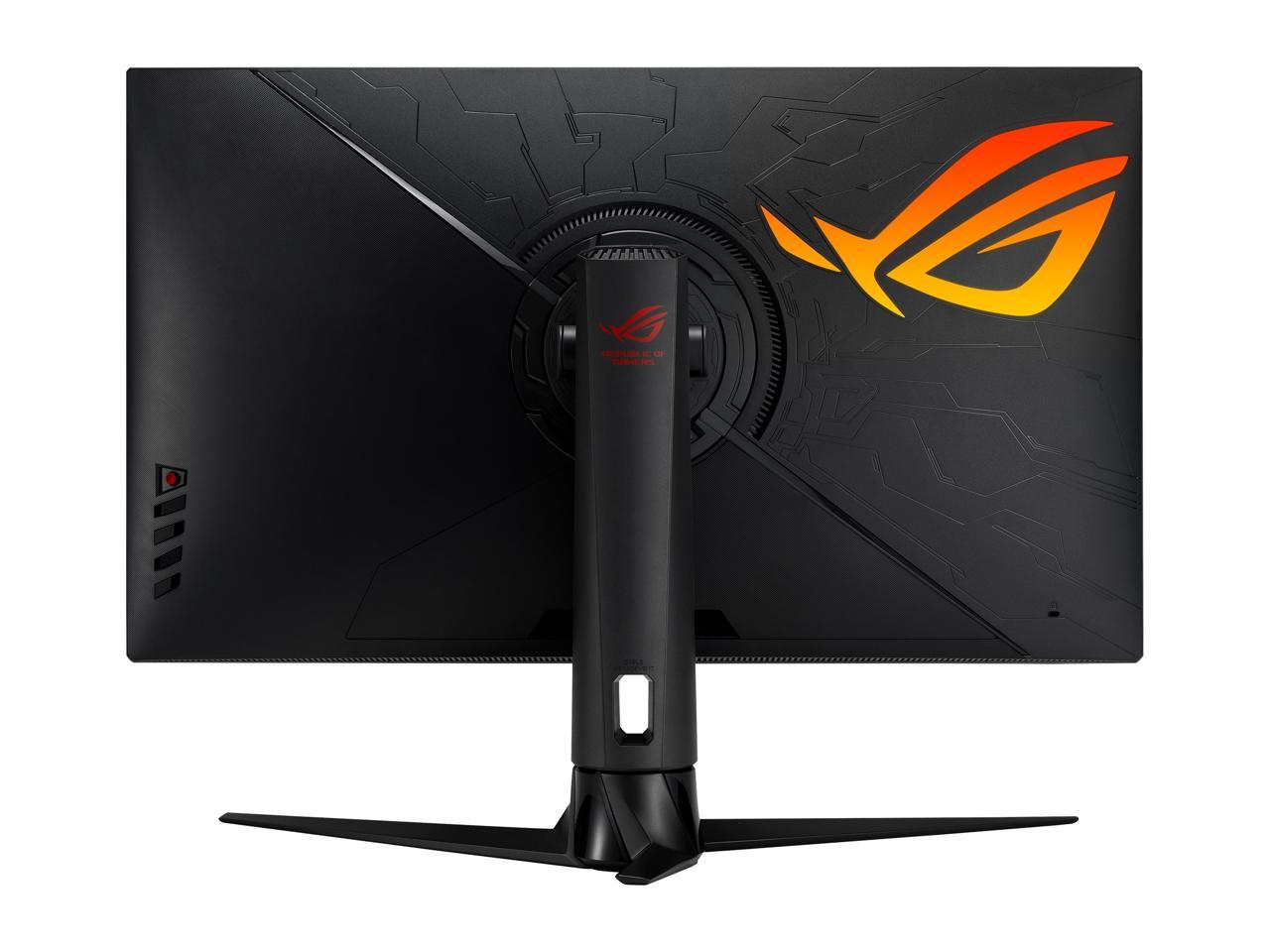 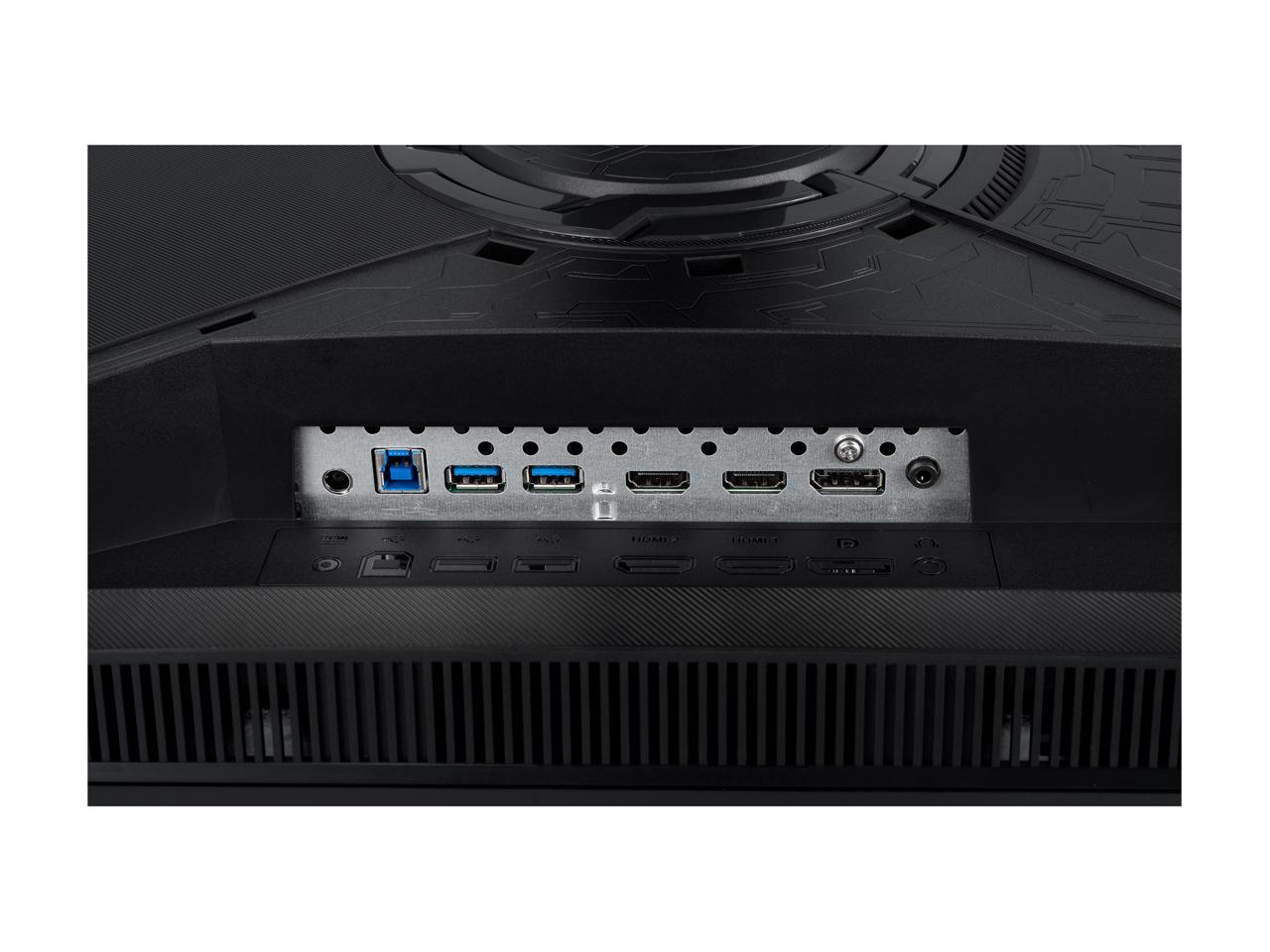 Learn more about the ASUS PG32UQ

Pros: -Awesome color accuracy by default. The CD contains an ICC profile and using it and the default picture settings it already looks far better than the acer ips monitor I had previously. -The 4k 120hz dream team! I almost don't need to choose anymore! Many games I can't hit 120fps on while in 4k on the max settings but the ones that can look incredible. Doom 2016 I am able to do it on and it feels amazing. Hopefully the 1100 NVidia series can boost the rest of the games. -HDR looks amazing! On my Playstation 4 at least. I don't have any PC games with HDR. I'm downloading FFXV as I write this to have a single PC game with HDR. -Gsync! Gsync is very good with 4k considering current top of the line hardware can't get much more than 60 fps at 4k. So you will still get a smooth experience even at the lower FPS.

Cons: - Sadly you can't have the best of both the picture and the refresh rate at the same time. You get the options of 144hz refresh while sacrificing color accuracy, 10 bit color depth while sacrificing the refresh to a 98hz max, or the middle ground of 120hz refresh and 8 bit color depth. The middle ground seems like the best option, 8 bit and 10 bit color depth doesn't look much different and 120hz 144hz refresh feel pretty similar in game. -The stand! The monitor supports a vesa mount but removing the included stand is not at all obvious. There are instructions on how to attach a vesa mount but they seem to have forgotten to include instructions on how to take the included stand off. For anyone wondering, there's a small notch on the back of the monitor under the stand which annoyingly rotates with the monitor and stand, so you need a small flathead screwdriver or something to fit into the notch and pop the shiny plastic decorative ring off. After the shiny half is off you can then pop the black half off with just your hands. you'll be able to take out the four black screws holding the stand on and free the monitor from the stand. -HDR in games! There's very few pc games that have HDR currently, I bought FFXV just to see it on the monitor. -NVidia Graphics card firmware! This won't be immediately obvious to most people. I can't even remember where I found out about this. In June NVidia released a firmware update to allow your card to make full use of Display port 1.4. It is not included in driver updates. You need to specifically search for it on NVidia's website. Luckily updating the firmware is incredibly easy after you find and download the firmware. -Heavy! If you use a monitor arm be prepared to tighten it up a ton. My arm dropped like a rock after putting the monitor on. -Power brick! This thing has it's own power brick. Not a big issue but you will not be able to use any D-cable you are already using. Power bricks are also just kind of inconvenient for cleaning wiring your desk. I'm surprised I never saw that mentioned. -Price! I found it worth it as someone who is bad at managing money but I have the feeling cheaper monitors will be able to do this in the near future. On the plus side I doubt I'll need to replace this monitor for a loooong time.

Overall Review: So to summarize, arguably there are a lot more cons than pros but this is the best picture you can get on a monitor currently for gaming. Till the next generation of graphics cards release it is hard to make use of all of the monitors features. For PC there are very few games that use HDR. It is also incredibly difficult to hit the 120 fps while running a 4k resolution, you will not be able to do it on most modern games and even some old games. With PS4 Pro and Xbox One X you can get the 4k resolution and many games use HDR but they will only get 60 fps at most. Consoles also can't use the gsync. The Xbox one can use freesync however so maybe freesync would have been more valuable? I wish Nvidia and AMD would use the same tech that was compatible with each other to make that less of a pain for consumers. TLDR This is the best monitor out there but the many drawbacks and price make it a tough sell for anyone but the most hardcore enthusiasts. Also only get this monitor if you intend to get the next generation of graphics cards, I'm sure they will greatly help with the headaches of trying to run a 4k resolution.

Overall Review: I wanted to love this monitor, but after receiving it and using it for about a day, the screen went black and never returned. Tried plugging it into different PCs and different ports/power outlets. I sent it back to Newegg ASAP, waiting on a replacement. UPDATE!! 12/04/2021 I received my replacement unit and this time it didn't last 10 minutes before it shut down and never came back on again. The unit seemed to reboot randomly and then eventually never powered back on again. I have been an ASUS ROG Monitor owner since the early 2010s and never encountered such problems before. I'm extremely frustrated and have requested a refund. At this point, I would implore anyone who's looking at buying this unit to look elsewhere.

Manufacturer Response:
Dear Christopher M, We certainly value your feedback on this matter, and I will be letting the related department know about the issues you are experiencing for continuous improvements to the product line. When possible, please reach out to me at your earliest convenience and I'll sure to provide any answers and/or resolutions to your product issues as quickly as possible. You can reach me at cl-adrian@asus.com. Your case for reference is N2112016037-0005. Thank you for choosing ASUS! Best Regards, Adrian ASUS Customer Loyalty – US Support
TRAVIS J.
Ownership: 1 day to 1 week
Verified Owner
Hi DOA rate!12/2/2021 6:11:07 PM

Pros: Nice product while it worked!

Cons: Stopped working in the first 24 hours, screen is black.

Manufacturer Response:
Dear TRAVIS J, Thank you for bringing this to our attention and I certainly understand your frustration. Please know that ASUS products undergo intensive quality control testing and final inspections for both hardware and software before we release it worldwide. ASUS provides warranty for the unit in order to fix or repair any isolated factory escape defect. If you need any assistance, feel free to contact me at cl-adrian@asus.com, and I will help you to the best of my abilities. I am here to assist our customers with our products and dedicated in bringing a resolution to all issues that they may come across. Your case for reference is N2112016037-0004. Thank you for choosing ASUS! Best Regards, Adrian ASUS Customer Loyalty – US Support
Anonymous
Ownership: 1 week to 1 month
Verified Owner
Didn't work at all12/3/2021 9:03:21 PM

Cons: DOES NOT WORK Keeps Flickering Comes with dead cables Won't work at all on my Nvidia RTX 2080ti

Overall Review: This monitor is absolute garbage. I'm sending it back immediately!

Manufacturer Response:
Dear Valued Customer, We certainly understand your disappointment with the quality of the product that was received and the inconvenience this may have caused you. Have you already contacted your Place of Purchase for an exchange? Please provide me with more details on this situation so we can take the appropriate steps to get these issues straightened out. If you need any assistance, feel free to contact me at cl-adrian@asus.com, and I will help you to the best of my abilities. I am here to assist our customers with our products and dedicated in bringing a resolution to all issues that they may come across. Your case for reference is N2112016037-0001. Thank you for choosing ASUS! Best Regards, Adrian ASUS Customer Loyalty – US Support
Howard B.
Ownership: 1 week to 1 month
Verified Owner
This Monitor! - Review of ASUS ROG Swift PG27UQ2/21/2019 9:39:01 AM

Pros: The display is sharp and the colors are amazing. Playing Anthem in 4k HDR at 120Hz is truly a treat for your eyes. I've also been using this monitor for work, and I haven't had any issues with text being blurry.

Cons: - No issues to report during the two weeks that I've had this monitor. I will update the review after I've thrown more things at this monitor to better judge performance.

Overall Review: - The fan issues that a lot of people have been complaining about are either defects with their monitor or these people are extremely picky when it comes to noise. I've tried overclocking the monitor and playing games on it for a few hours, and the fan sound isn't even noticeable. - I have also not installed the drivers for this monitor yet, which may or may not improve the performance. Overall you get your money's worth for this monitor.

Cons: Completely shut off after 2 minutes

Overall Review: This was one of the best displays I had seen. However, after 2 minutes the screen displayed vertical RGB lines then went blank no display no power light indicator. DEAD. I thought to myself this cant be. It just arrived. I just plugged it in. After unplugging it and replacing DP and HDMI Cables I had another picture and witnessed the glory that is 4k gaming with deep HDR color and 115 FPS. I was playing Rise of the tomb raider and needed fur for crafting. I saw a rabbit come out of the bushes. I slowly drew my bow, took a breath and released. Impact!!! the rabbit went down. I went to claim my reward. After pocketing my spoils a thin vertical line appeared in the center of the then another, and another. The monitor gave one final flicker before dying this time for good. I do not recommend this monitor witch is a shame as I have purchase ASUS product's and monitors in the past and have never had an issue. I will not be purchasing an ASUS monitor again. The disappointment is just too much to bare.

Cons: - power failure from cycling monitor splash/screen, to not turning on at all, to turning off in the middle of playing etc etc etc - hmdi struggled to find signal, having to cycle 3-4 times to find signal - ips corner glow is not just bad, but excessive - monitor OSD/menu is clunky - buttons feel very cheap

Overall Review: 1/10 for the color, everything else is trash - Requesting replacement today, hoping the next one I get is functional and improved. Otherwise, I will be requesting a refund and staying FAR FAR away from this monitor.

Pros: -Clarity: Very good. I didn't know how big of an improvement it was at first. Now I have my old monitor on the side and looking at my old monitor. -Color: If you put this monitor side by side with another, you will notice that the white is much more white. The colors are more vibrant overall. -Evenness: Stays even no matter which angle you look at it from. I have my monitor mounted high, and slouch when I play games. The monitor looking consistent from both angles is a huge plus

Cons: -Ugly base. Switching bases wasn't intuitive. Screws are hidden behind this ugly metal thing than you have to yank out with a flat metal object.

Overall Review: Tips: -You can use a wall mount but you have to yank out the metal ring behind it. -You need to activate HDR and/or 144hz via windows settings. They are not on by default.