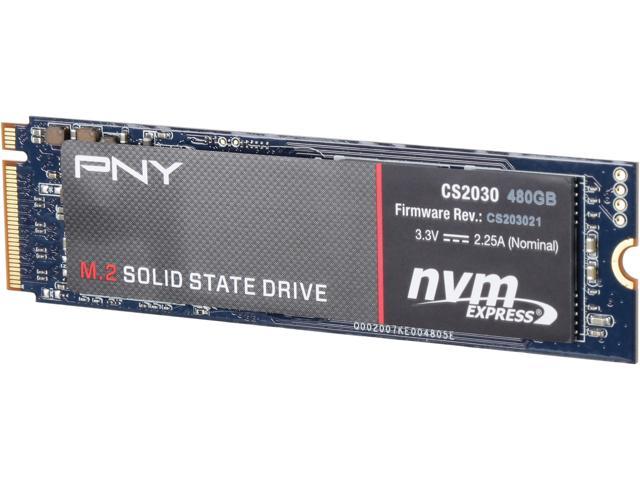 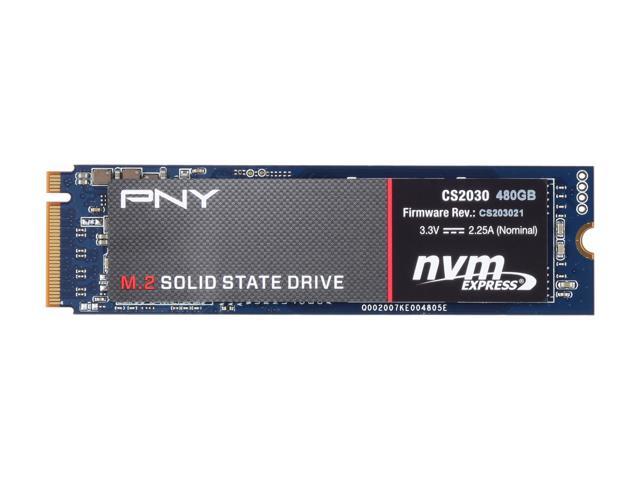 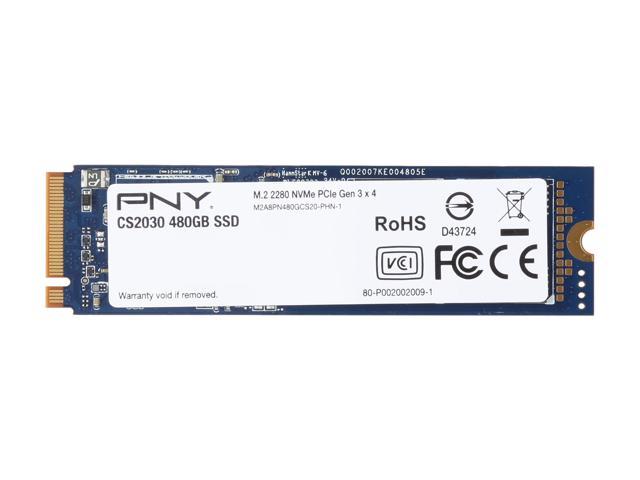 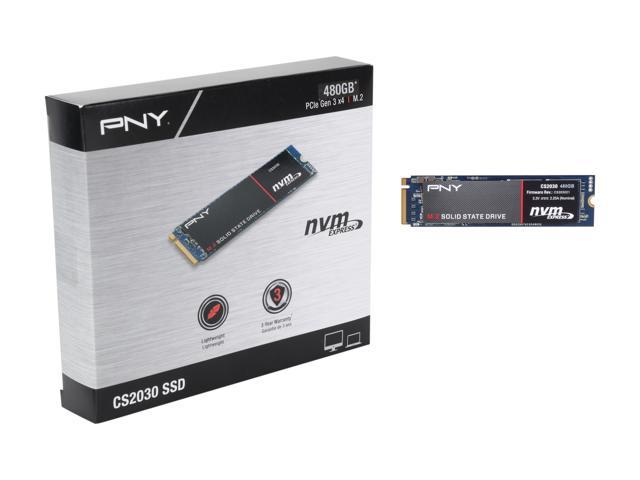 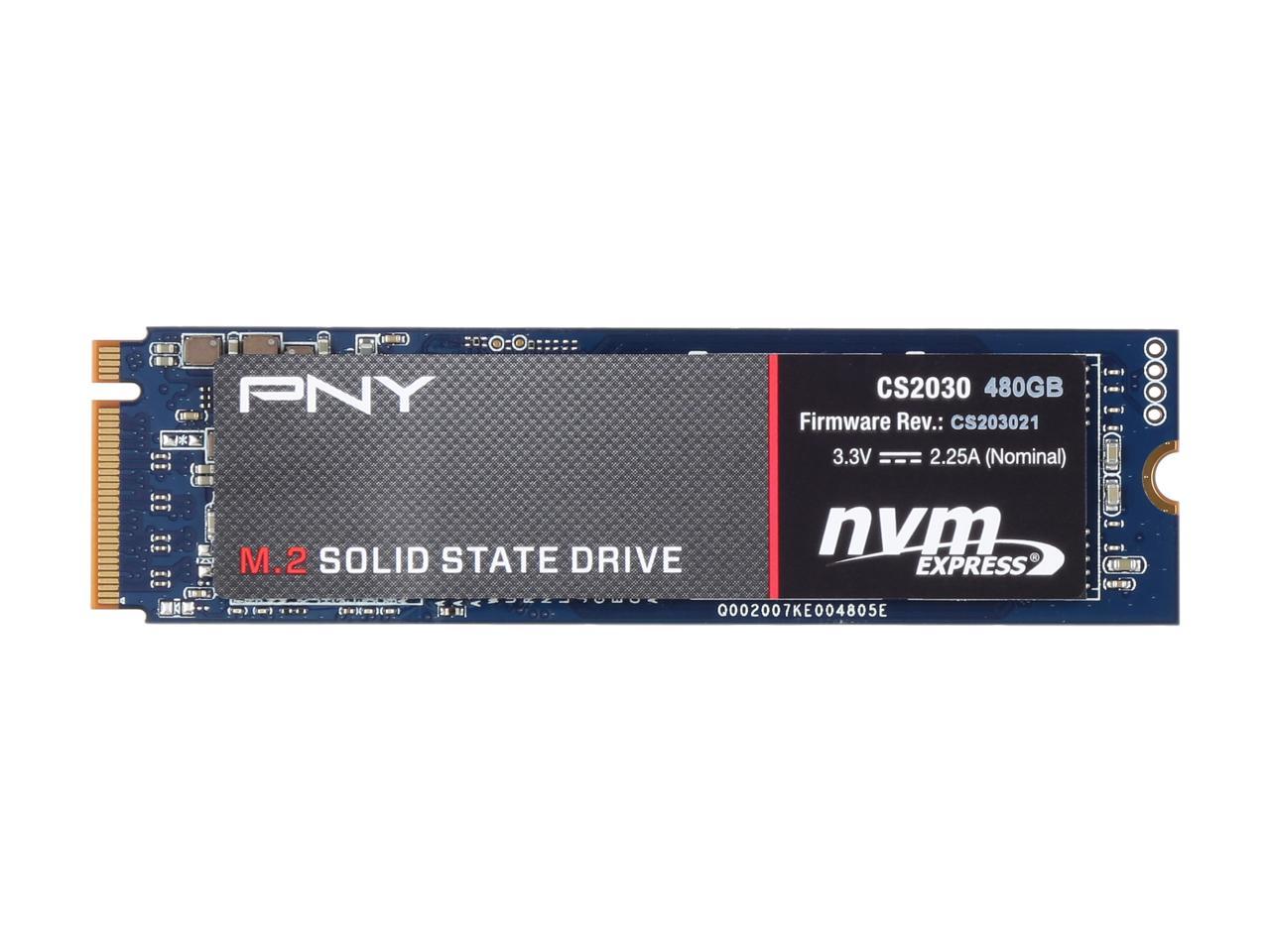 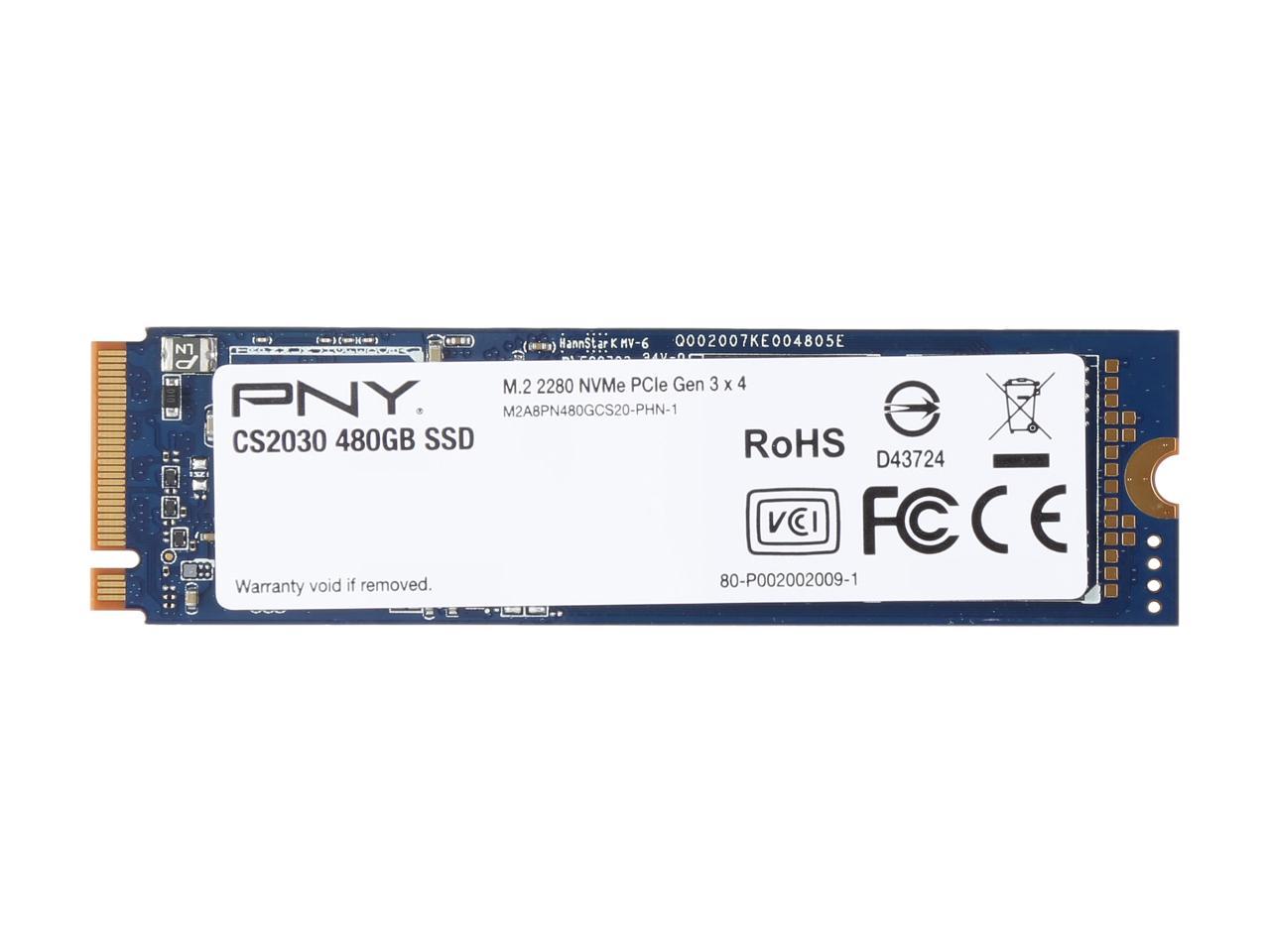 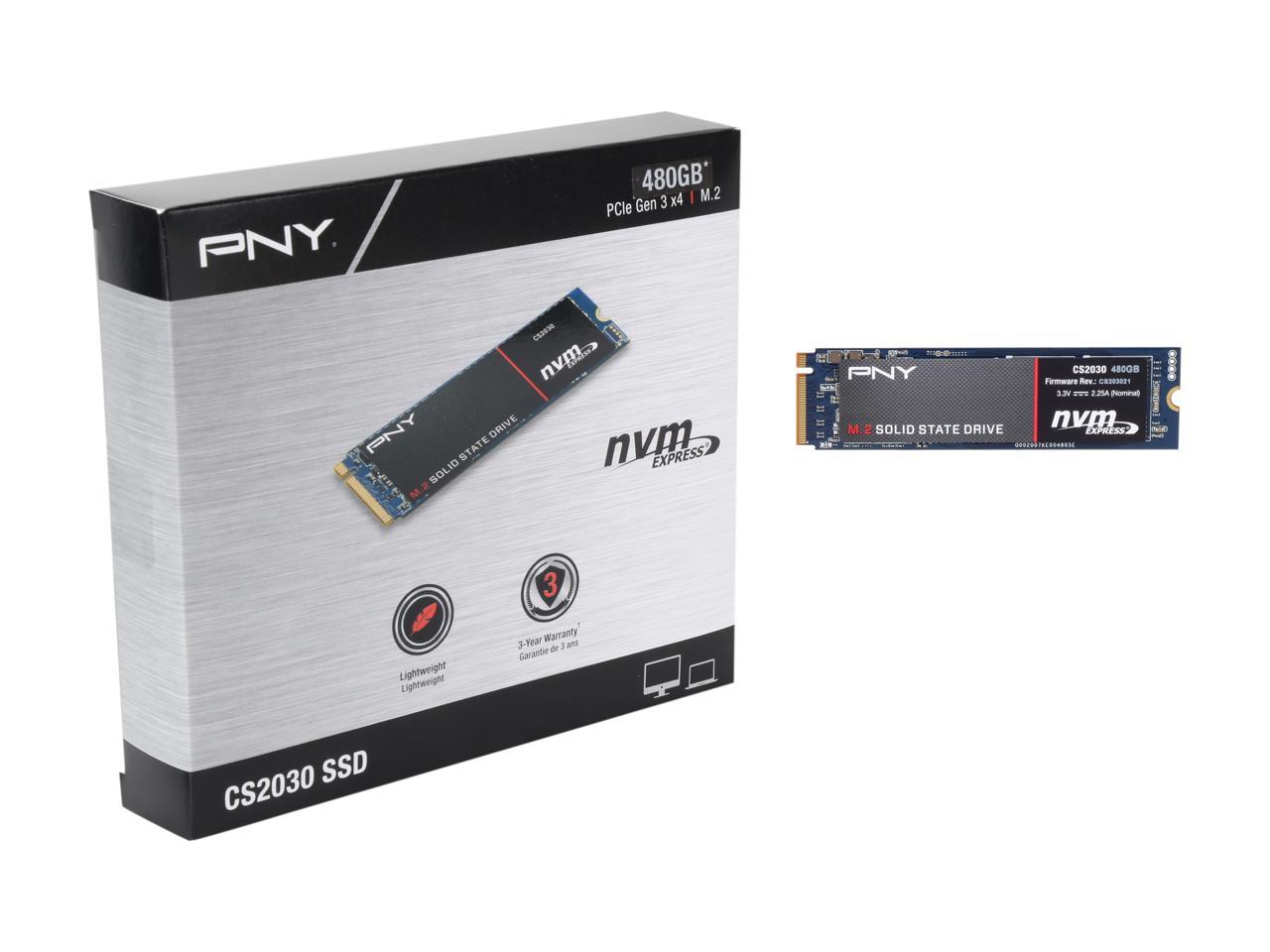 (9) Write a Review
In stock.
Ships from China.
Most customers receive within 5-23 days.
Overview
Specs
Reviews

Based on PCIe (Gen3 x4) NVMe host interface, the PNY CS2030 M.2 is the extreme performance line of PNY SSDs, which offer colossal 32Gbps bus bandwidth - five times that of the SATA interface. And powered by the cutting-edge Phison controller and premium quality Flash chips, it offers breakneck speed of 2,750 MB/s seq. read* and up to 1,500 MB/s seq. write*, enabling instant-on experience in your app launches and game loading. Plus, with a compact and lightweight M.2 2280 form factor, this model is a great choice for compatible Ultrabook, slim laptop and also desktops.

Infuse a new life into your computer with the PNY CS2030 extreme performance SSD. 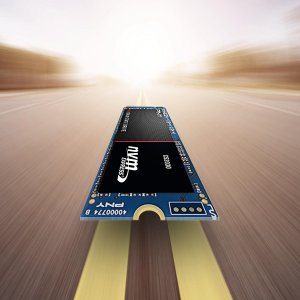 Optimal Performance
With lightning fast read speeds up to 2,750MB/s* and write speeds up to 1,500 MB/s*, the PNY CS2030 M.2 SSD allows you to transfer large files in seconds. 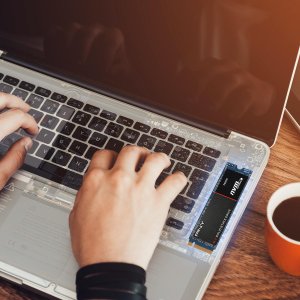 Enhanced Reliability
PNY SSDs are up to 30 times more robust than HDDs, making it less likely to fail in extreme environments, including high and low temperatures. The non-volatile NAND in the system enables the SSD to retain its memory if your computer ever falls or is dropped. 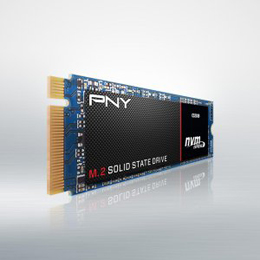 PCIe Interface
The CS2030 M.2 PCIe NVMe SSD is compact and is ideal for Ultrabooks, laptops and workstations capable of supporting the next generation M.2 PCIe NVMe Gen 3 x4 protocol. 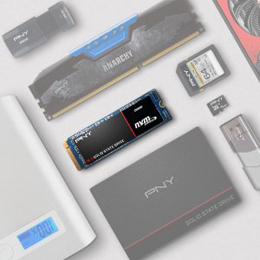 Trusted Brand
PNY has been in the electronics manufacturing business for over 30 years specializing in computing and mobility products which are sold in 50+ countries around the world.

Note: *Speed may vary by configuration.

Overall Review: - I would recommend this product to others - I wish there was some kind of heat-sink that I could buy for these drives (currently custom making my own)

Pros: The drive is very fast so if you are looking for speed at a reasonable price then this may be the drive for you. The published specs place it on pretty much even keel with the Samsung 960 for considerably less money. I purchased this NVMe drive to put in a new machine running a 7th generation Intel processor, but since I am acquiring the pieces as I can afford to buy them I am testing this drive in another machine that I already have and am using.

Cons: The drive that I received did not hit the published read speeds listed on the PNY site. It is stated that the drive should come close to reaching 2800 MBs read speed but on my system (Gigabyte GA-Z97-HD3P motherboard) it only reaches 1517 MBs. The drive is not throttling back the speed due to heat. It does get hot. If you plug in the drive exactly like it is shipped then it is not unrealistic to hit temps of 74 C and higher. I have a Antec 300 V2 case with 4 case fans in it and the PNY drive in a PCI-E adapter because my m.2 slot on the motherboard only supports X2 speeds. When I first turned the machine on I sad idle temps in the 60 to 65C range. Any kind of load bumped it up into the 70 degree range. I removed the door and mounted a Corsair SP120 high volume fan on the door. With the fan running I am seeing 47 to 50 degrees at an idle and with a load on the machine I am seeing temps in the 65 to 68 degree range. I also purchased an external heat sink, but I do not know if it is worth the risk of voiding the warranty to remove the label and put it on. I say this because the NVMe stick has chips on both sides of the card and the heatsink would only be on the top set of chips. Revision: 8-11-2017 I installed this SSD drive in my new build and now I am seeing read speeds of 2780 which is very close to the published specs from PNY. Even though I had used a PCI-E X4 external adapter previously the motherboard only supported PCI-E X2 speeds. This was not a fault of the drive.

Overall Review: It is very possible that the older components in this machine is limiting the maximum speed of the NVMe drive. As it is the drive is about 3 times faster than my existing Plextor 2.5 inch SSD drive which is pretty decent. I am hoping that when I put it into my new creation that I will see performance speeds that others are posting. In my opinion this drive runs too hot both at an idle and under load. I plan on keeping a 120 mm fan in the door blowing fresh air directly on the PNY drive to keep it cool. The average person probably would not see any difference between the speed of this drive and any good 2.5 inch SSD drive. So you could buy a larger drive for the same or less money and probably be just as satisfied. If you desire the fastest drive then I would recommend that you purchase one that runs cooler. If you are lured to this one by the cheaper price you may as well factor in the price of an external fan or you will more than likely experience throttling back when doing intense tasks such as video editing or copying large files to the drive. I plan on putting this drive in my new machine within the next couple of months so I will supplement this review with how well the drive performs with a faster processor and DDR4 memory.

Pros: Mounted easily in my Asus Z170A motherboard, after setting the BIOS to accept an M.2 SSD Windows 10 recognized it with no problems. Very easy to reach a live person in tech support.

Cons: Fast, but little discernible real world difference from my SanDisk Extreme Pro SSD. PNY does not supply an NVME driver for this unit, but Windows 10's SSD driver worked with limits (little SMART data available). The killer was that it runs HOT, averaging 80°C and reaching 85°C during a backup (open case with a case fan blowing on it). It's limit is 70°C and PNY's tech support person said it shouldn't exceed 65°C, that this was WAY too hot and that I should return it as defective. So back it went.

20 out of 30 people found this review helpful. Did you?
Manufacturer Response:
Hello, We are very sorry for any inconvenience this may have caused. Please be advised that this product holds a three year warranty from the date of purchase and also includes free technical support to answer any questions you may have. PNY Brand Champion
michael s.
Ownership: more than 1 year
Verified Owner
Bad product2/26/2019 4:28:06 AM

Cons: Installed drive only to fine my hd light stays on constant. called tech support and they tell me there is a conflict. Computer works fine when the drive is not installed. So tell me which one is causing the conflict. HMMM. Its a clean formatted drive I install it ad hd light stays on. I moved drive with OS on it to sata 2 sata 3 and sata 4 and it does the same thing hd light on constant. Do not buy this drive

Pros: Was able to get a Seq.Read of 2317 and Write of 1057. So close to what is advertised but what they dont tell you is how hot this thing runs.

Cons: My idle temp as a boot drive is 63C and underload reaches up to 79C. This is with a heatsink I bought online cause before had a idle of 70 and a load of up to 85 which almost fried it.

Overall Review: Honestly recommend you spend the extra bucks and get an evo unless you wanna waste the savings from this on a fan to cool it down.

Cons: 1) Did not come with mounting screw 2) Runs HOT! Once max temp is reached it will throttle 3) No software/firmware updates available 4) PNY stated no registration required for warranty. (Save your invoice!)

Overall Review: It's not a bad drive and I got it when it was @ $99. No mounting screw so I had to dig in other mb boxes to find one. Had to attach a 60mm fan over it to keep it cool otherwise it will fry. PNY's tech support is lackluster.

Pros: -Very fast: Sequential read/write on CrystalDiskMark 5.2.1 x64 is showing 2772 MB/s read and 1461 MB/s Write at 33% full (only after adequate cooling. See below.) Close enough to rated specs for me and honestly it'll probably vary a bit -Loads up windows pretty fast. Once my motherboard finishes its checks I'm at the windows screen in no time -This drive has true MLC NAND, not TLC with a cache like the similarly priced 960 EVO -Stable -Good PTP -Got it exceptionally cheap.

Cons: -Overheats doing menial tasks without additional cooling (runs around 60 - 70C most of the time). Hits its 75C cap (where it stopped for me) fairly easy -It's not clear how to get started with an M.2 NVMe drive and there isn't anything that would lead you in the right direction. There were no instructions in the box and nothing on PNY's website, so you're on your own! I had multiple issues that I had to go scour forums to learn the remedy to -PNY's software either can't find its own drive, or will not display it because it already has the latest firmware, but it will not tell you of either outcome. It just displays a blank screen

Overall Review: Neutral: -Dual-sided (apparently a problem for some users?) Other notes: -I set a high airflow 20mmx40mm fan blowing directly on the drive from half an inch away. The drive can now hit near its rated speeds fairly easy, with temps maxing around 57C. Before using this fan, the maximum write speed was 943 MB/s and the read was about 2400 MB/s, as it was overheating and throttling during the test -Cloning my existing SSD to the new drive would not work, I could only do a fresh install -If you have issues with Windows saying it cannot install to the NVMe drive, try unplugging all other drives (except your install source) and try again. This fixed the problem for me -I'm still perplexed as to why many manufactures have yet to offer any serious cooling solutions that will keep their drives from throttling

Pros: 1. it's fast very fast Read Speed 2,750MB/s Write Speed 1,500MB/s. 2. Removed since it throttles 3. Has no heatsink like the Specifications says. 4. Runs faster then the Specifications says on Newegg. 4. Has no heatsink easy fix for me. 5. Already knew this M.2 runs hot but i can fix that with duck tape anything can be fixed with duck tape. 6. Lets me get to play with aluminium and thermal pads and rubber bands. 7. At least i get to go out into town now for rubber band's and gas for my truck...

Cons: 1. Runs very hot. 2. Second hottest thing in my system first is my gpu. 3. Has no Heatsink need to buy a after market heatsink. 4. has no heatsink might not be a easy fix for other people. 5. Throttles. 6. Will burnout if you don't know how to get rid of the heat this thing puts generates. 7. Runs hotter then my i7-6800k @ 4.1GHZ. 8. people must RMA this thing a lot. 9. have to remove from PC to put heat sink on it. 10. have to remove junky thermal tape from heatsink. 11. need to buy rubber band's still. 12. have to put more gas in truck because of this M.2 Drive.

Overall Review: WARNING Duck Tape can't fix everything. here take 4 stars since it's a good drive and i can fix the problem with it easily.