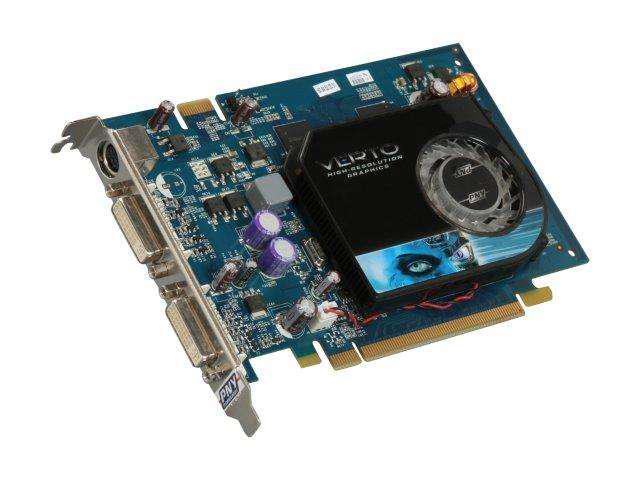 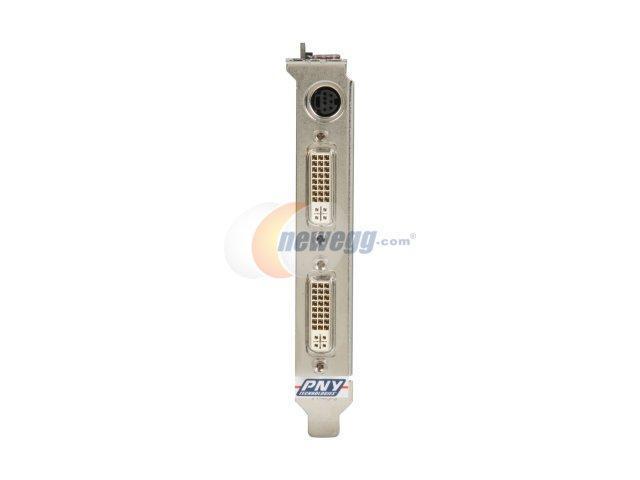 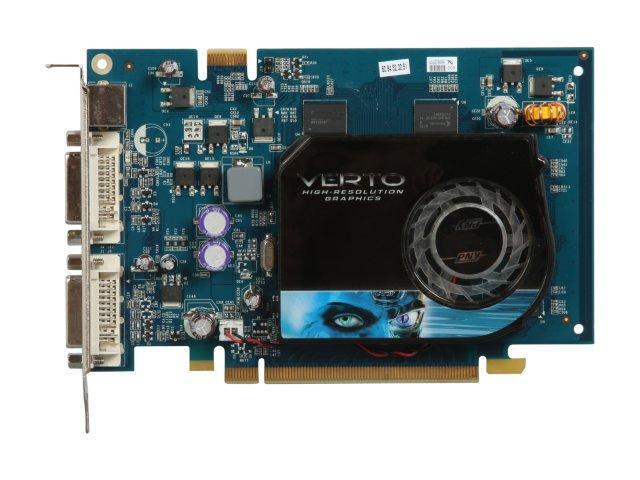 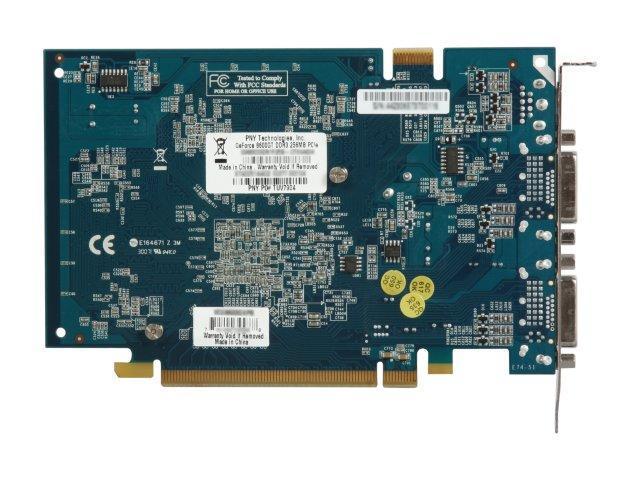 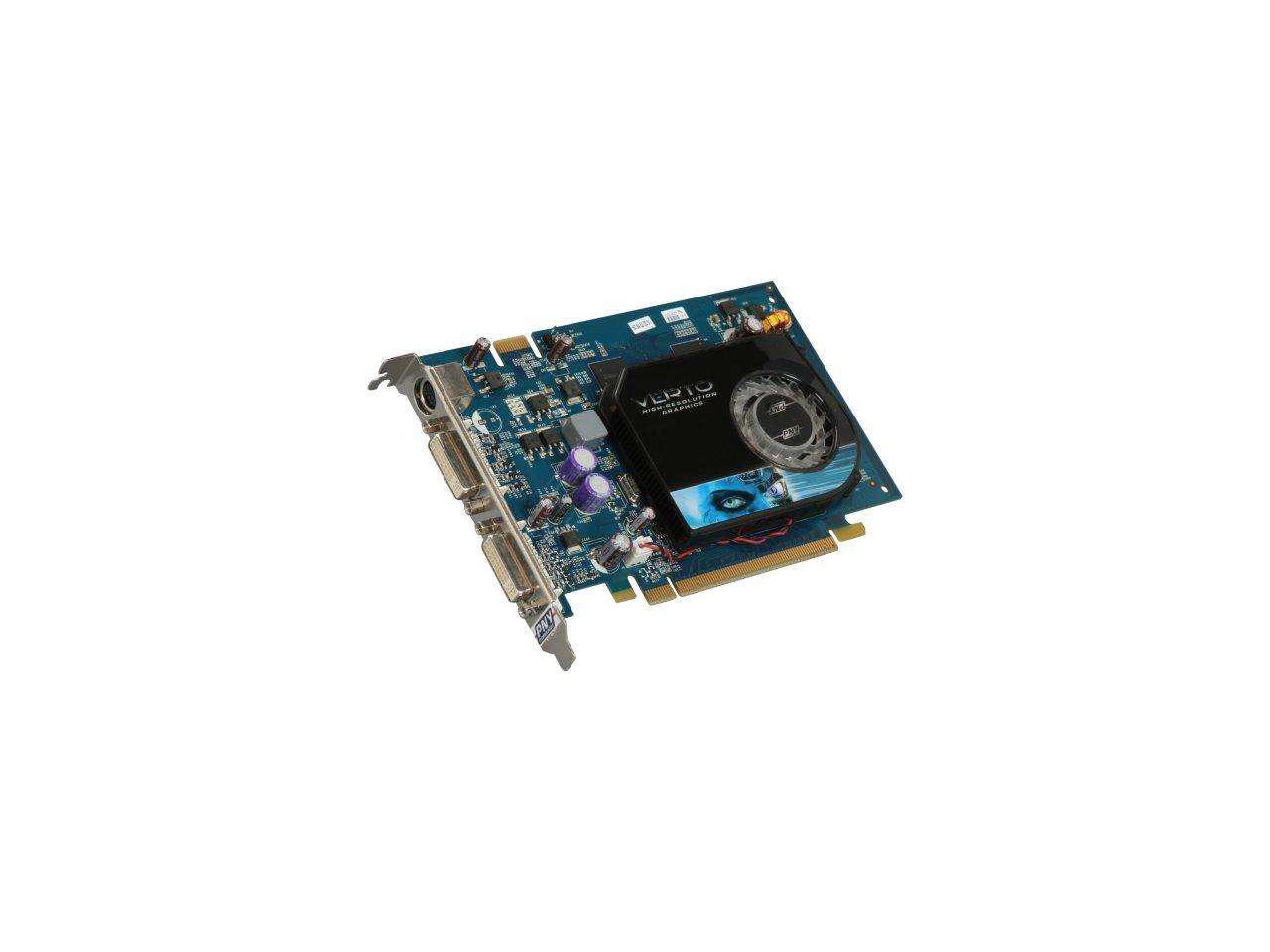 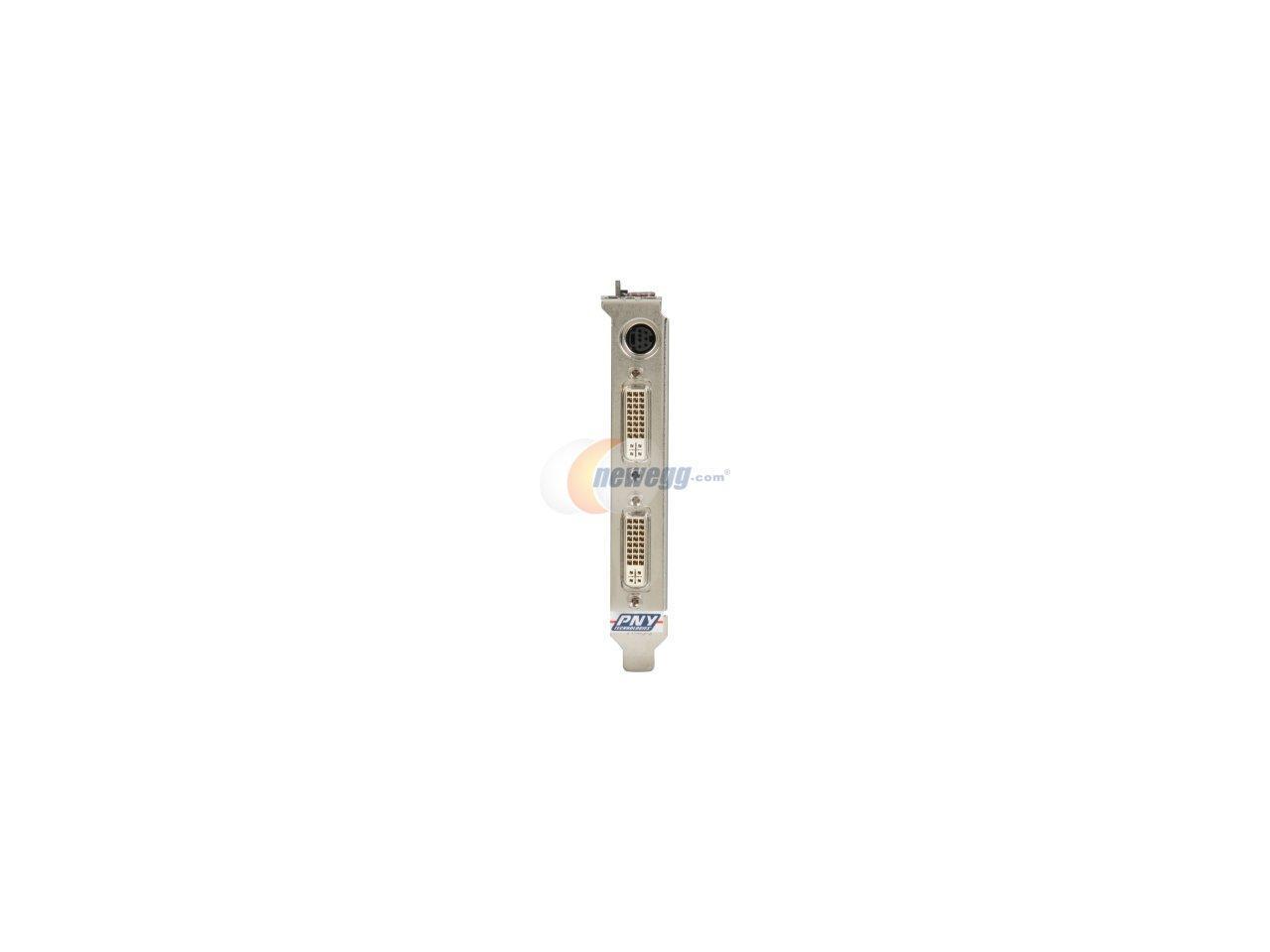 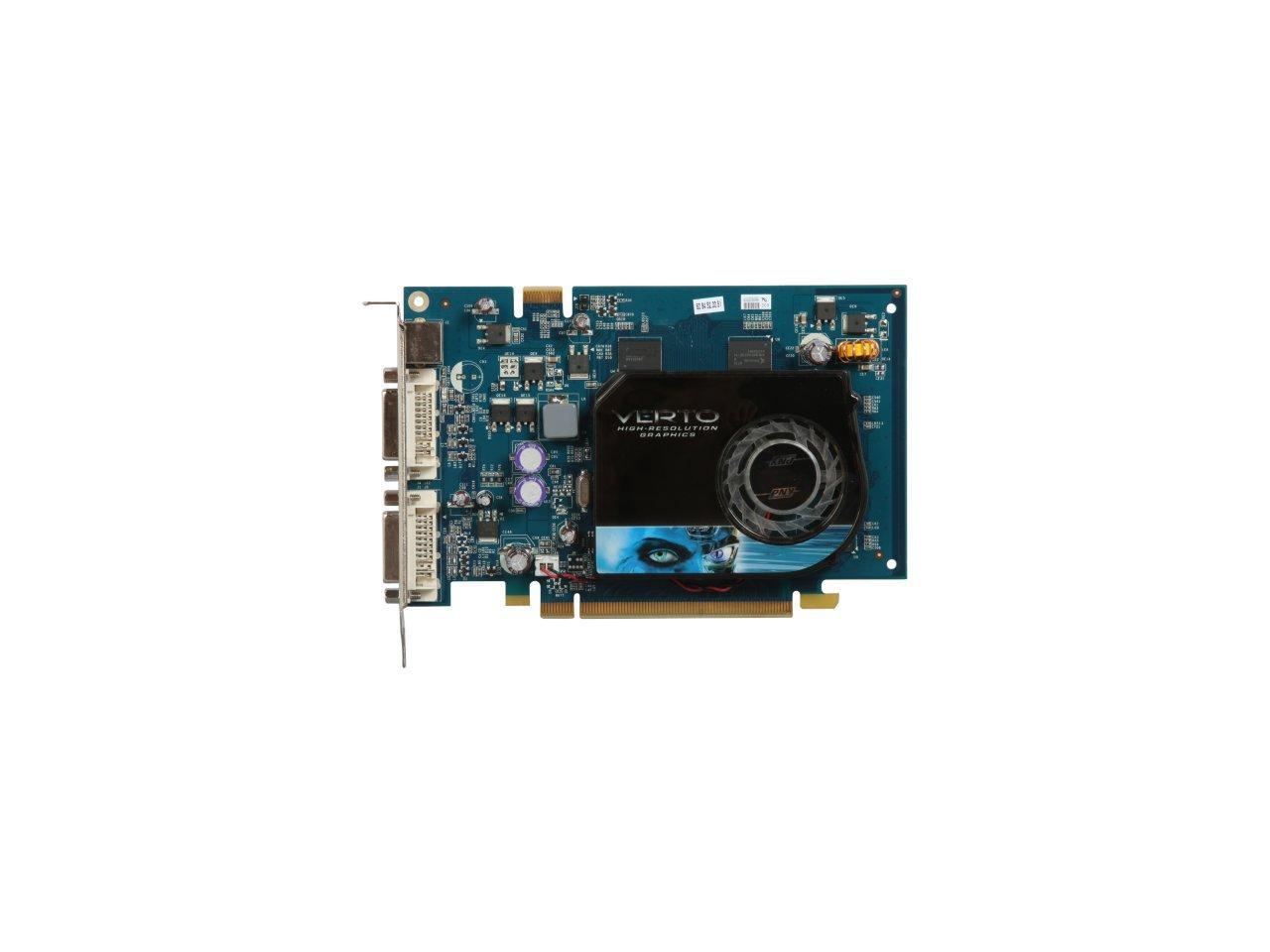 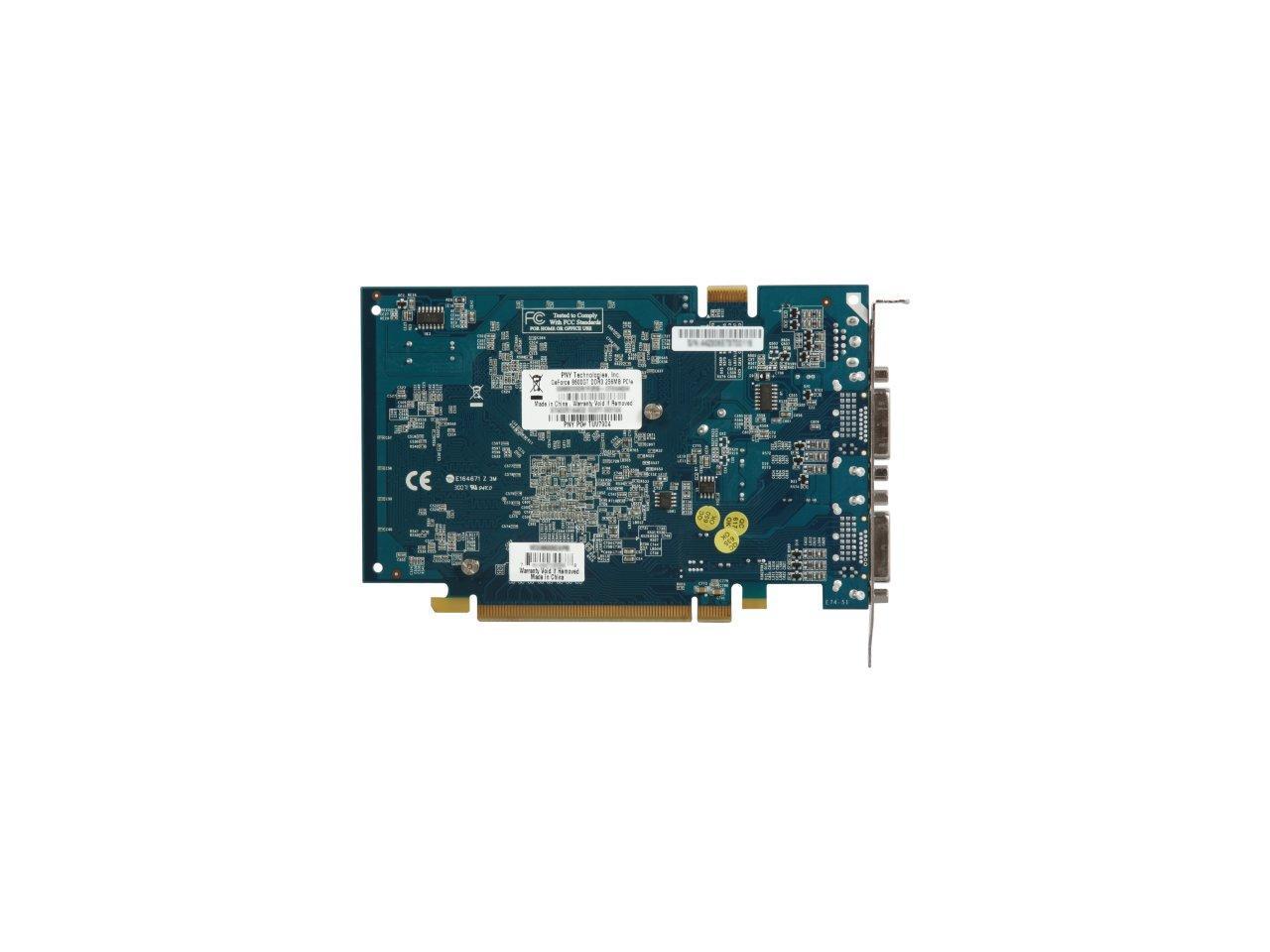 Pros: dirt cheap at $18 AR; quiet fan (mine has the four-pin, auto-throttling fan); idles at 30% (50C), which is not audible in a case (even 100% is but a mild whoosh). You can easily alter the fan speed if you wish. Adequate performance for a HTPC; CUDA-enabled.

Overall Review: as many have said, this is not for serious gaming, but is great for a media server or HTPC.

Pros: Has pretty decent specs For $18 after the rebate, there really wasn't a reason not to buy this card (assuming it's better than your current one) Pretty decent upgrade from a 7300 gt Super good budget gaming card! (in theory) It will play most newer games with decent settings. Don't expect a powerhouse by any means though.

Cons: It was pretty noisy. I could instantly tell there was more noise coming from my system after installing this. It overheats. That's inexcusable. It idles at about 66C (assuming speedfan was correct) and got to an astonishing 107C while gaming. I couldn't believe this. I would be gaming and all of a sudden I would have a terrible framerate, and I realized it was because this card was getting so hot the gpu had to turn off! Didn't come with a VGA to DVI converter, so goodbye to my dual monitors until I buy I second converter (one was left over from my old card)

Overall Review: It was a good upgrade from my 7300 gt (also PNY). I loved that card for a year and a half, had no qualms with it, and this got about 1.5x the gaming performance (for framerate) in my most played game (TF2). I was really excited about this card and it seemed like it would live up to its expectations, but failed in the end. I have already swapped it out for a 9600 gso (asus). Non-returnable item here, so I guess I'm going to be selling it on craigslist or something. Not a big deal, it was less than $20, assuming I get that rebate. 3 stars was generous for this card, but I feel like I could've overcame some of the obstacles, but I didn't play with it much.

Pros: Got this about a month ago as a shellshocker deal. I already got my mail in rebate also. Price after rebate was around 15. I cannot believe i got this for so cheap, and how good it works for my needs. Runs flawlessly in my HTPC playing DVD's analog satelite, and HD over the air programing. S-video out is the main reason I picked this card. It runs great on my "40-inch" sony XBR tube TV. Fan DOES have the self adjusting speed wires. Does not need any extra power wires. Short, and does not interfere with anything in my SMALL htpc case, also, does not impede airflow.

Cons: When a black screen shows up (like in between commercials on tv) there is ghosting that runs across the screen. Not sure if this is the TV, antenna, or this card. When there is a normal picture being played, you cannot see it. So all in all, it does not bother at all, aside from just knowing it is there.

Overall Review: This card even looks good...lol Like I said, I am just tickled pink with only paying ~15~ for this kind of preformance. Even at the current price of ~45~ I would say it is a solid card and worth the money.

Pros: Great performer for the price. Fan is three-wire and reasonably quiet, contrary to some reviews here. WEI under Windows 7 is 5.7 for Graphics and 6.3 for Gaming Graphics. 1080P H.264 playback is perfect. Can handle casual gaming duties.

Cons: This isn't going to handle a heavy-duty game at high resolutions.

Pros: Inexpensive and it supports DirectX 10.

Cons: heatsink and fan seem a little cheap (true of most video cards to be fair)

Overall Review: Got this sucker for a very reasonable price. Price per performance ratio I am very happy with.

Pros: Bought this under the shell shocker deal, price was unbelievable. Newegg might as well have given them away. Even for the current price it's a solid deal. Stock cooler works surprisingly well, card idled in the low 40's and hit mid 60's under load on stock clocks. Even overclocked it topped out in the high 60's. It also overclocked quite well. Great value for money, it's not a crazy gaming card, but it's infinitely better than integrated graphics.

Cons: What are those?

Overall Review: I don't game, I use this card for folding@home and to avoid using my i3's integrated GPU. This little thing gets me around 1800ppd with low power consumption and low heat. Put a Scythe Musashi on it (gross overkill) and it now idles at 31C and only hits 41C under load.

Pros: Card was super cheap after rebate and promo code. This card runs no hotter than any other GPU out there. It idles at ~50°C, gets to ~60°C stressed. Fan is relatively quiet set on auto. Even at 100% it is barely noticeable.

Cons: Short for Convicts, one who has been convicted of a crime.

Overall Review: I bought 2 of these. One for my wife's computer (basic internet and mild gaming system, replacing a 7200GS) and a HTPC (replacing a 7300GT) that is hooked up to a CRT TV for now using S-video. The 8600GT is a huge improvement over both of these cards, and runs cooler. I do have an SLI board that I debated trying them in just to see, but did not bother, since the systems I bought them for really needed them. This is an OEM card, so no extras are included, just learn to read the description or look at the pictures. Both my cards had 4 wire fans, so I don't know what the other reviewer was talking about, as well as me being able to adjust the fan speed with EVGA Precision. Buy this knowing your getting an almost 3 year old model (the 8600GT was released 4/07) that was mid level even at it's release and you will be happy. This is not a "killer" card, even in SLI. It is a basic card for light to moderate gaming on smaller monitors; or just a nice upgrade from most onboard video.

Pros: Was cheap after rebate.

Cons: PNY's Lifetime Warranty is a sham. It only covers the product for one year or untill the product is discontinued (whichever occurs last). Just found this out last week when I tried to RMA a broken PNY ti4200. PNY guy seemed to take pleasure in denying my RMA.

Overall Review: No variable speed fan. Plays GRID on max settings at 1024x768. Does not include DVI to DSUB converter.