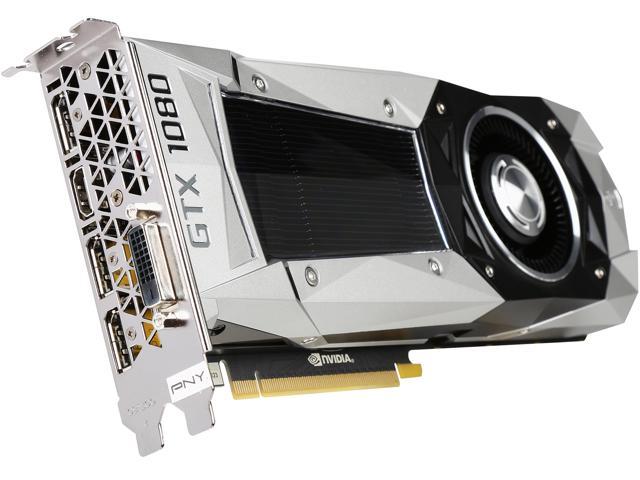 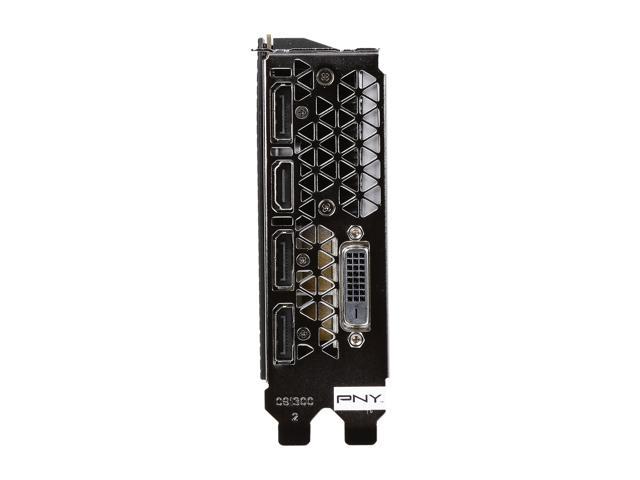 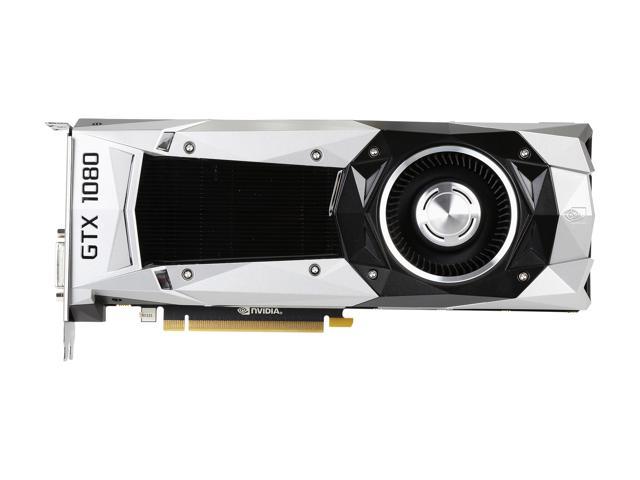 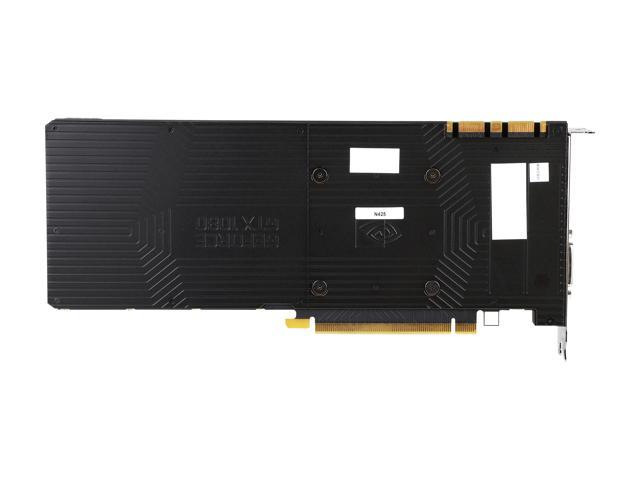 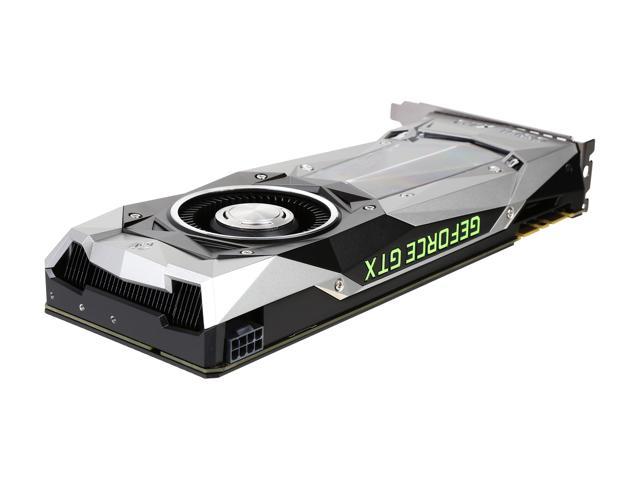 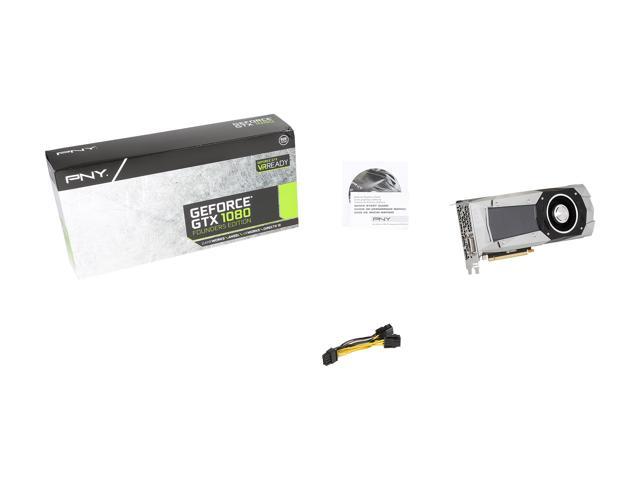 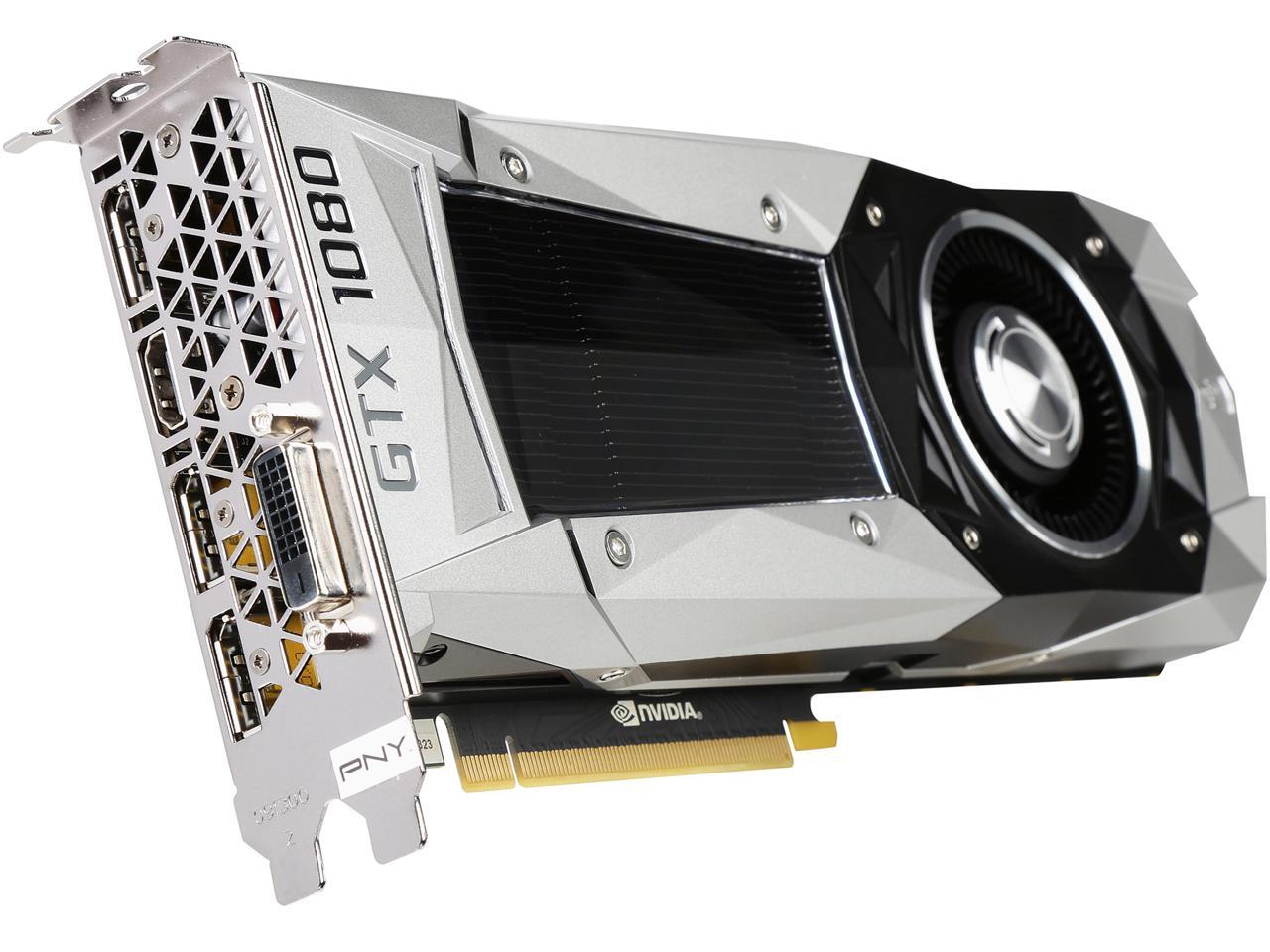 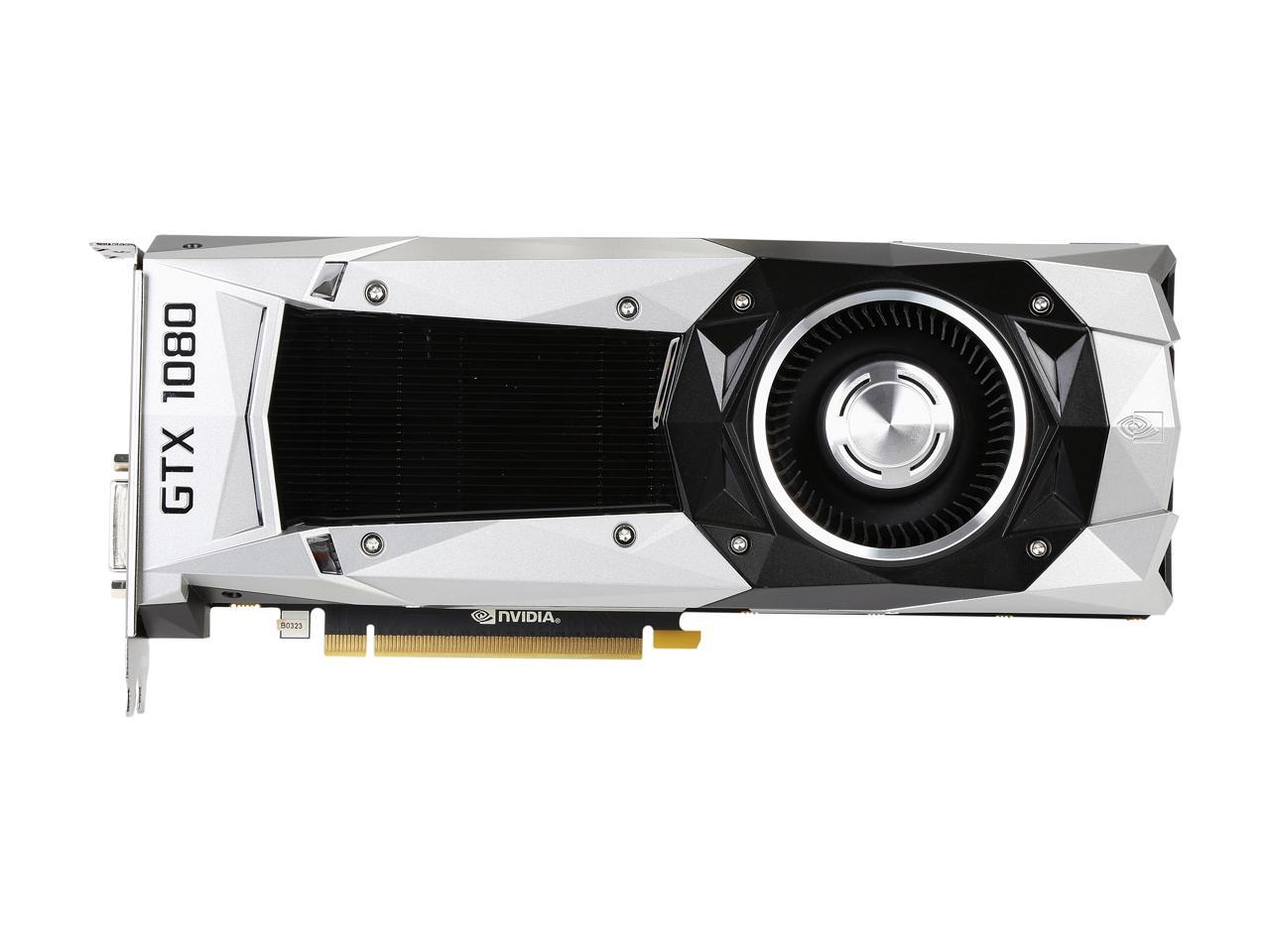 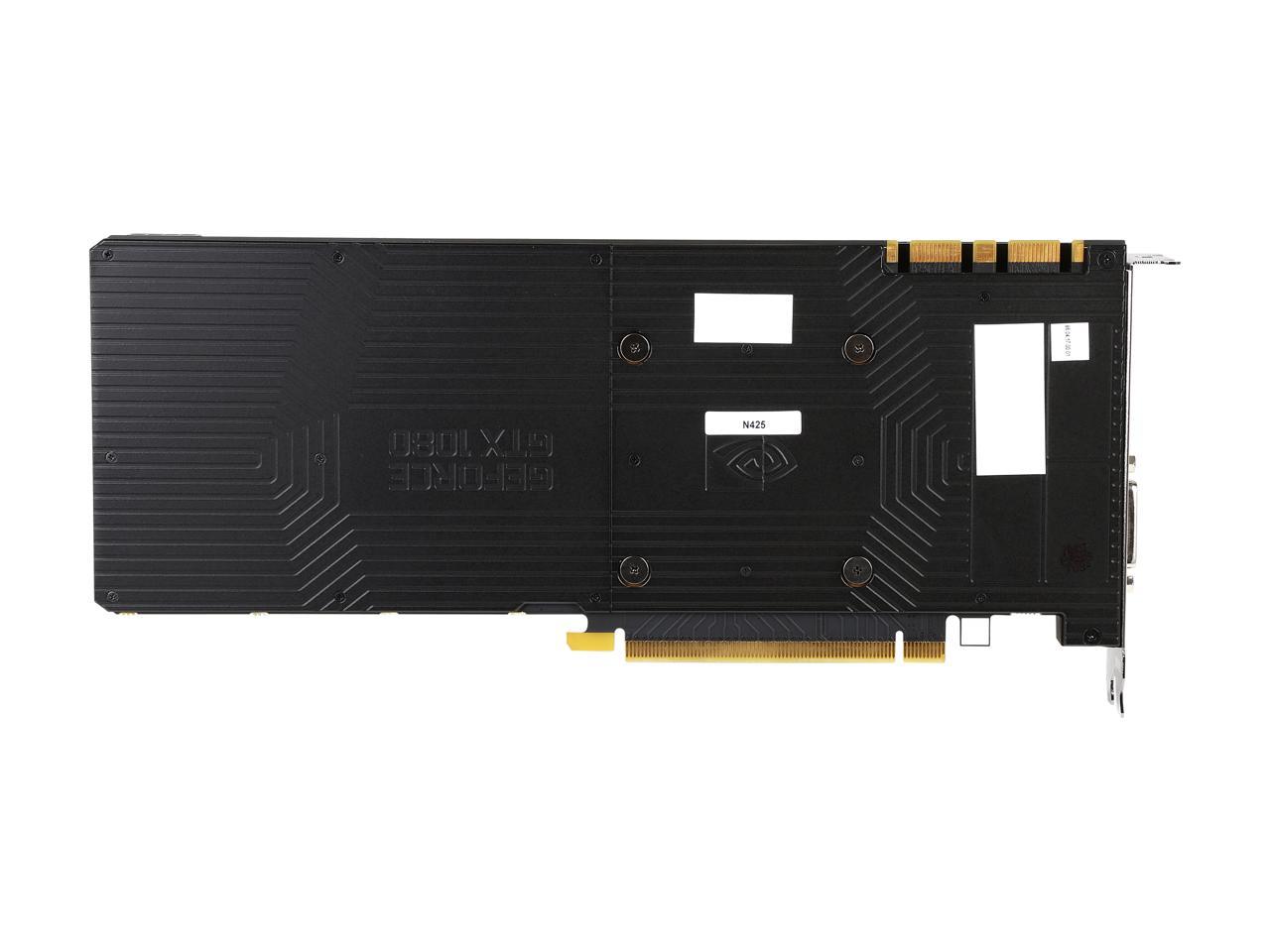 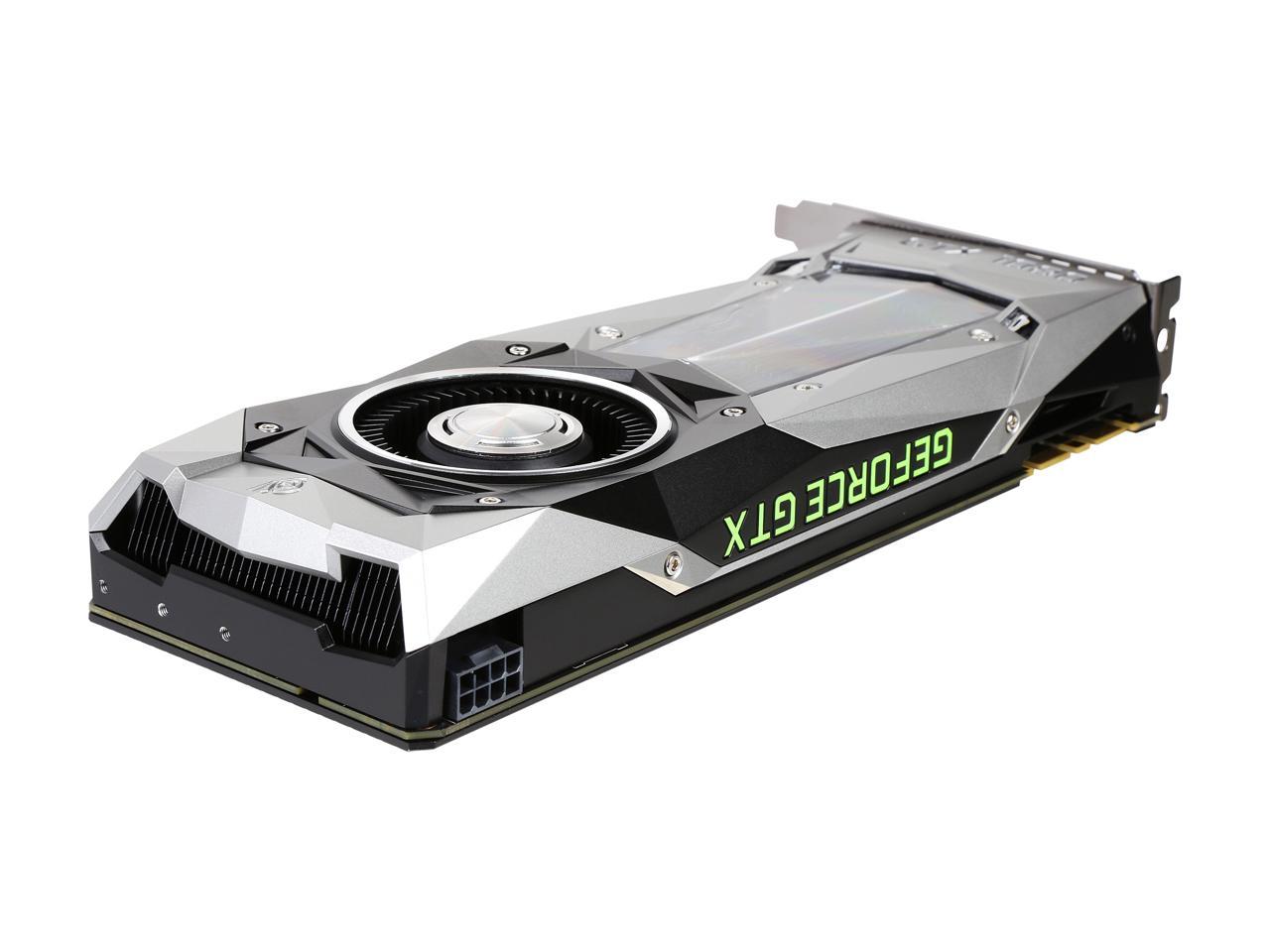 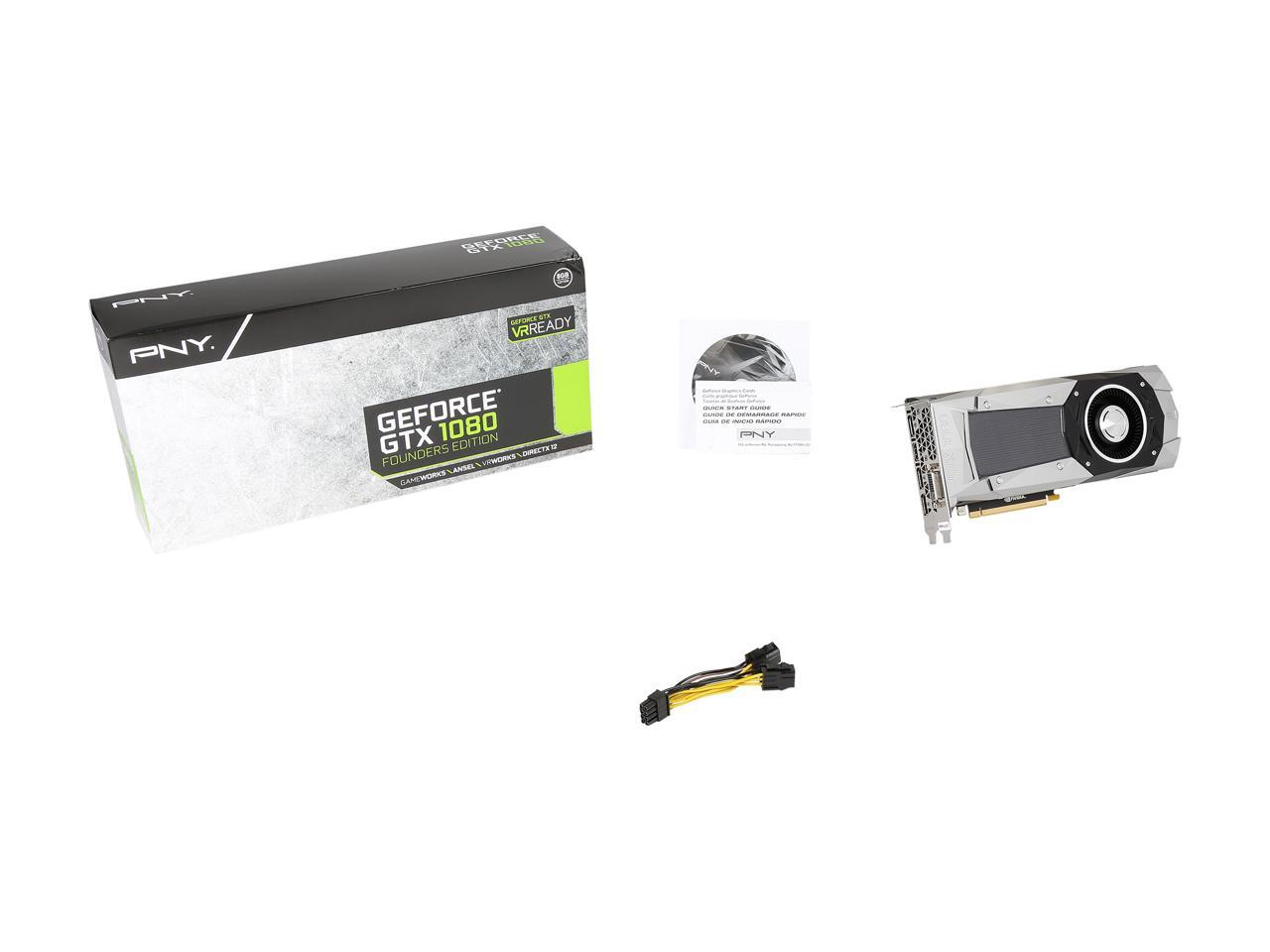 The NVIDIA new flagship GeForce GTX 1080 is the most advanced gaming graphics card ever created. Based on the state-of-the-art Pascal architecture, the GeForce GTX 1080 is built using 16nm FinFET technology and operates at unprecedented high clock speed. Coupled with the latest generation GDDR5X high bandwidth memory, the GeForce GTX 1080 sets a new benchmark for single-GPU - you'll enjoy awe-inspiring performance, power efficiency, and gaming experiences. It also delivers innovative new gaming technologies and breakthrough VR experiences, making it the ultimate gaming platform. Plus, with an arresting design and quality materials, the GeForce GTX 1080 grabs everyone’s attention whether in your hand or in the computer chassis. The new GeForce GTX 1080 is meticulously crafted to offer superior heat dissipation using vapor chamber cooling technology and premium materials, so it runs as cool as it looks. Pros: I came from an MSI Radeon HD 7970 which ran most games at high 60 fps. Some games like Witcher 3 I would have to turn down to medium or low just to hit 30 fps on at 2k resolution. Well plugged this bad boy up and not I'm hitting 60 fps 2k resolution on witcher 3 with all graphics at ultra and even hairworks on. I love this card.

Cons: -Expensive. But really for the power its better priced than whats out there -Hard to get one. of the 10 different brands all but 2 where sold out and the Gigabyte one sold out by the time I got to the shopping cart. This one sold out not too long after I ordered this card. As of writing this there are some back in stock but good luck getting one. -My GF almost killed me when she found out I spent almost $800 on a graphics card. I have a feeling she will finish the job when I get another one. But it will be worth it.

Pros: EXCITINGLY FAST! You DON'T need SLI if you're only playing at 1080p... you will get well above 100fps on max

Overall Review: I tell you what... I am just blown away by the performance on one single card. It's almost like SLI on ONE card alone. Nearly every latest game you through at it runs at a very high FPS rate. I'm impressed NVIDIA.

Pros: I had previously used a super clocked GTX 980 TI exclusively for X-Plane10 and had a frame rate with most settings from high to maximum of anywhere between 15 and 70. I installed the GTX 1080 and overclocked it to 2025 and made sure I set the fan speed when using this program to maximum. The frame rate never dropped below 50 and maintained 75 where I have it limited to. I would have never believed that this card would work as well as it did. I am not one who recommends products often but this card is an exception.

Cons: The hassle of trying to buy a GT X 1080 when they appear to never be in stock and the cost. I must have lucked out because as soon as I bought it newegg was out of them but I did get mine.Be aware this card runs hot and in less set up correctly it will throttle.

Overall Review: If you are a gamer and especially if you are a flight simulator enthusiast this card is a must.This manufacturer gives a lifetime warranty on this product at no charge if you register it.

Pros: I purchased two of these cards last year because I wanted to get into 4k gaming. Needless to say, it's a massive improvement and upgrade from my previous dual 970s. They run extremely well, don't get too hot when under load (max I've seen it get is 50°C). Battlefield 1 runs at a constant 60fps (I have a 60hz monitor), even during massive battles.

Cons: The only con is that dx12 isn't very well optimized for the card. I tried playing battlefield 1 with dx12 and it kept stuttering. I'm assuming it's just a software problem because dx11 is stupidly optimized for it.

Overall Review: When the price drops again, it's worth every penny to upgrade. I don't think the founders cards will come back in stock, but any 1080 for that matter will be worth it. I'm super happy with my purchase and now I won't have to worry about upgrading for the next few years at the least.

Did you find this review helpful?
Anonymous
Ownership: 1 day to 1 week
Verified Owner
It is solid, but PNY adds an annoying boot-up Splash Screen8/7/2016 5:39:12 PM

Cons: - I know people hate it when reviewers list the price as a con. I knew the price when I bought it, yes. However, $699 for a reference card 1080 is too much. At most, it should be $599-649. - The cooler is plastic. All that silver that looks like metal is actually plastic. C'mon, Nvidia.. PNY Cons: - Why on Earth did PNY enable the boot up splash screen for the GPU? When I power on the PC, it shows a PNY GTX 1080 boot up splash screen for 5 seconds. That's 5 seconds of my life I will never get back every time I turn on my PC now... - They did a horrible job with the thermal paste. At 75% fan speed, it was hitting 84C. I turned it up to 100% fan speed and it dropped to 80C. After removing the cooler, I saw why. There was barely any thermal paste on it. For a GPU, you want thermal paste making FULL coverage of the DIE. It's not like a CPU that has a heat spreader.

Overall Review: - Overall, if an extra splash screen at boot up is going to bother you like it does me, then get a different branded FE. - It was this or the Titan X Pascal. I would have gotten the Titan XP if it came out at $999, but Nvidia are getting greedy and know they have the market cornered as long as AMD has no PCMASTERRACE-tier GPU. Some other notes: - I returned an EVGA GTX 1080 FTW for this 1080 because I did not think the FTW EK block would fit in my case. I am pleasantly surprised that both cards perform close to the same. Firestrike GPU scores (when overclocked) are 25,000 for the PNY FE and 25,300ish for the FTW. That's at 2126MHz and +500 on the memory. Power target and voltage slider also maxed. - I will be installing this card into my loop once I sort out a possible faulty 6700K or RAM and look forward to sub 45C temps from there on.

Pros: Seems like a powerful card Nice blower design for exhaust of heat

Overall Review: This technically applies to all 1080 founders cards I can't properly use it with my lowly little FX 6300, Waiting on Zen, or a reasonable offer from Intel, will update review when I can see it running without heavy bottlenecks.

Pros: -None, See Cons and/or Other.

Cons: -Failed to work out of the box -call center does not transfer to a live person during regular business hours. It instead sends you to voicemail or automated run around. -I am attempting to RMA item or trouble shoot. How ever I cannot find proper troubleshooting or documentation for this card. -I did check the motherboard(ASUS z170-e) with other graphics cards. The computer booted and work this this. I did contact my motherboard manufacturer and they reported I should contact PNY for support. -I did attempt to use the GTX 180 FE graphics card with other computer setups that are similar or better. The card did not boot.

Overall Review: -I cannot recommenced this graphics card since it did not work out of the box. -If troubleshooting/RMA work on fixing this issue. I will amend this review.