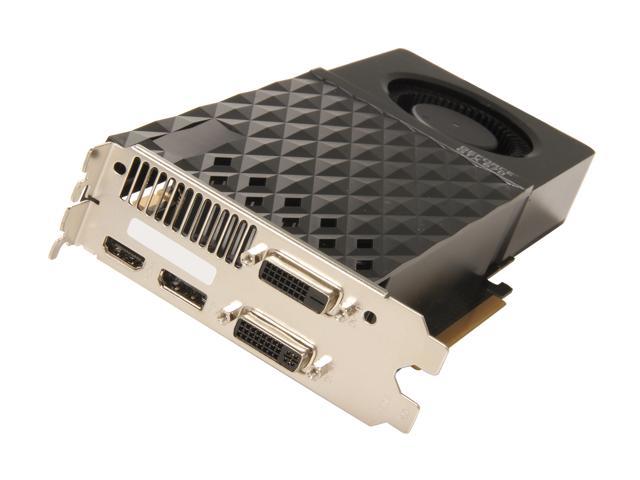 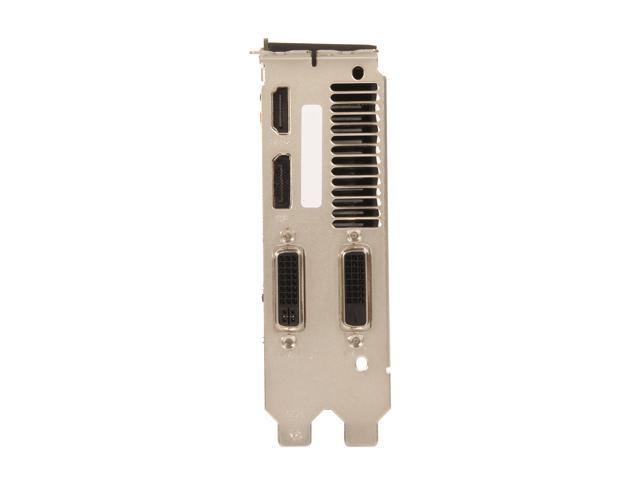 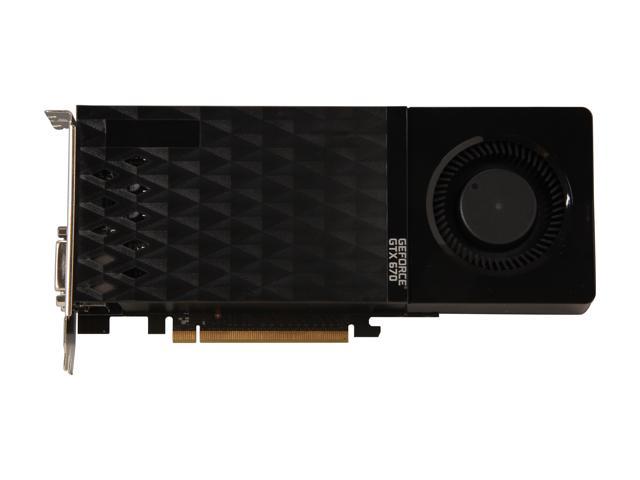 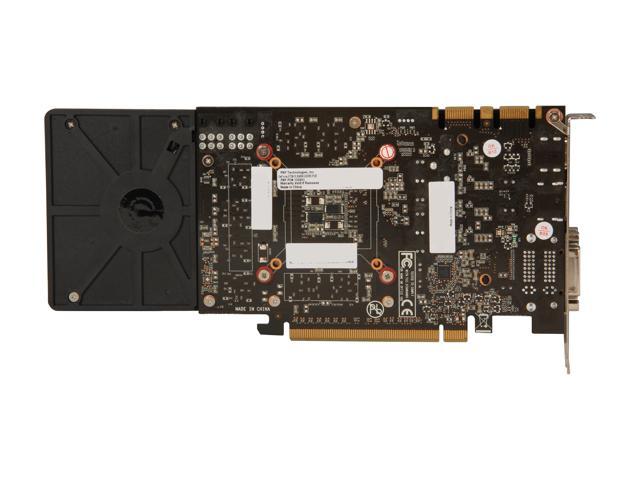 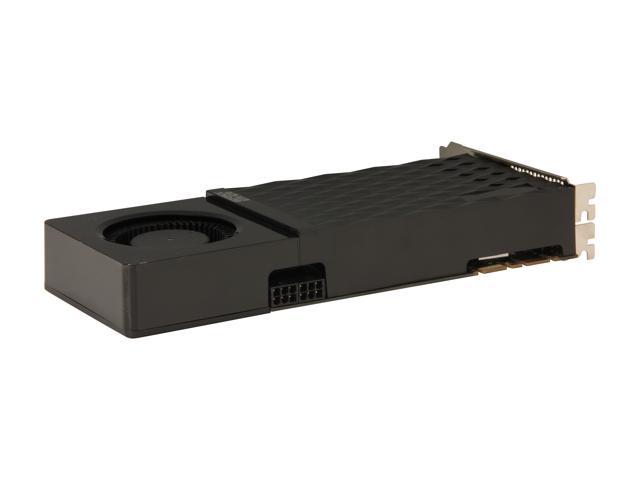 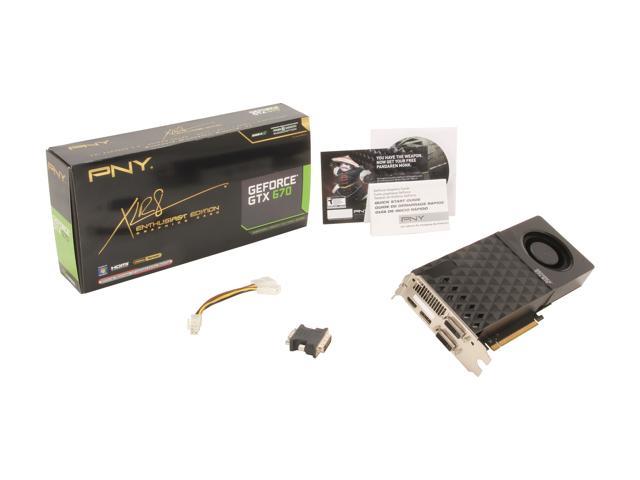 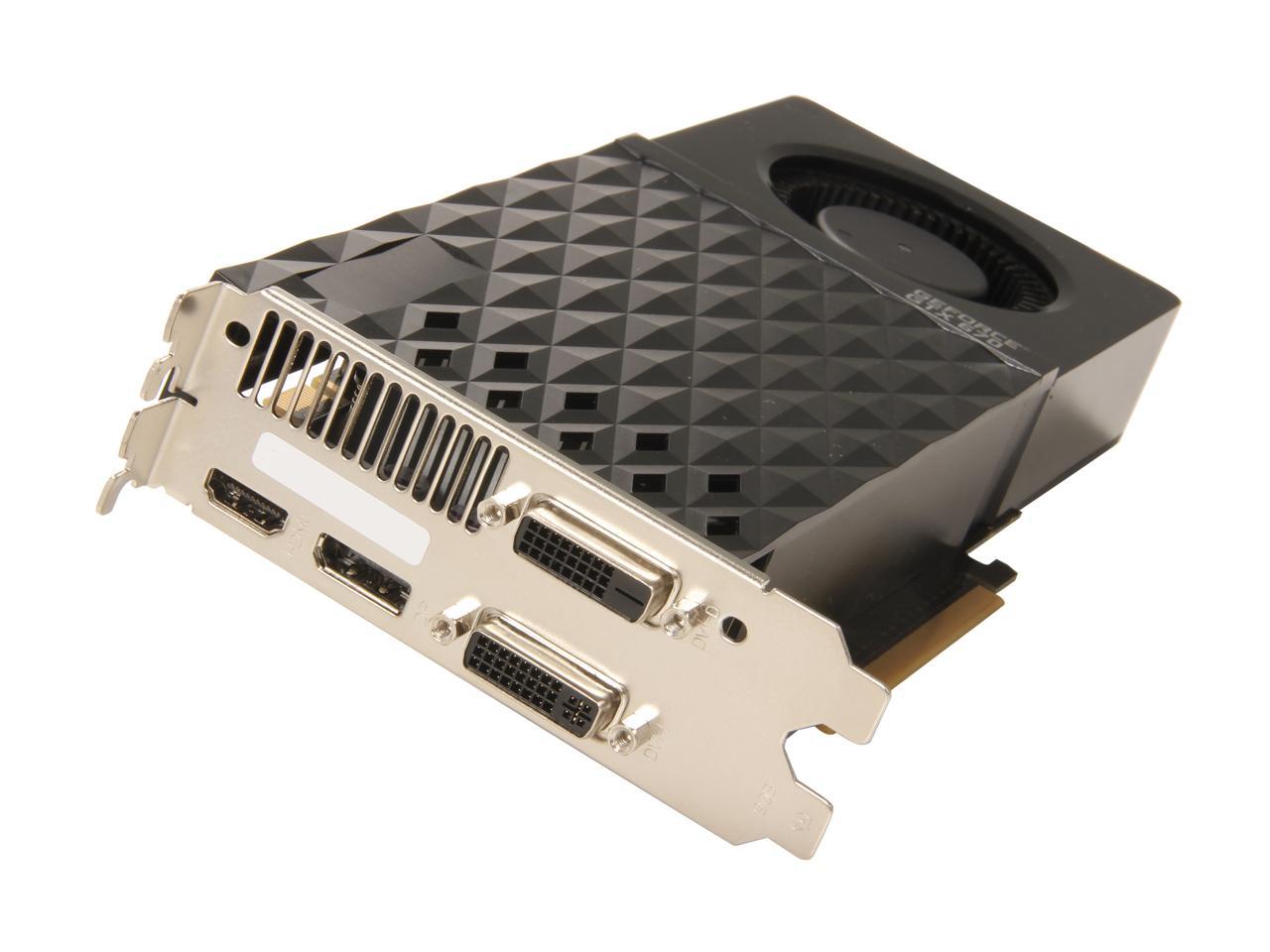 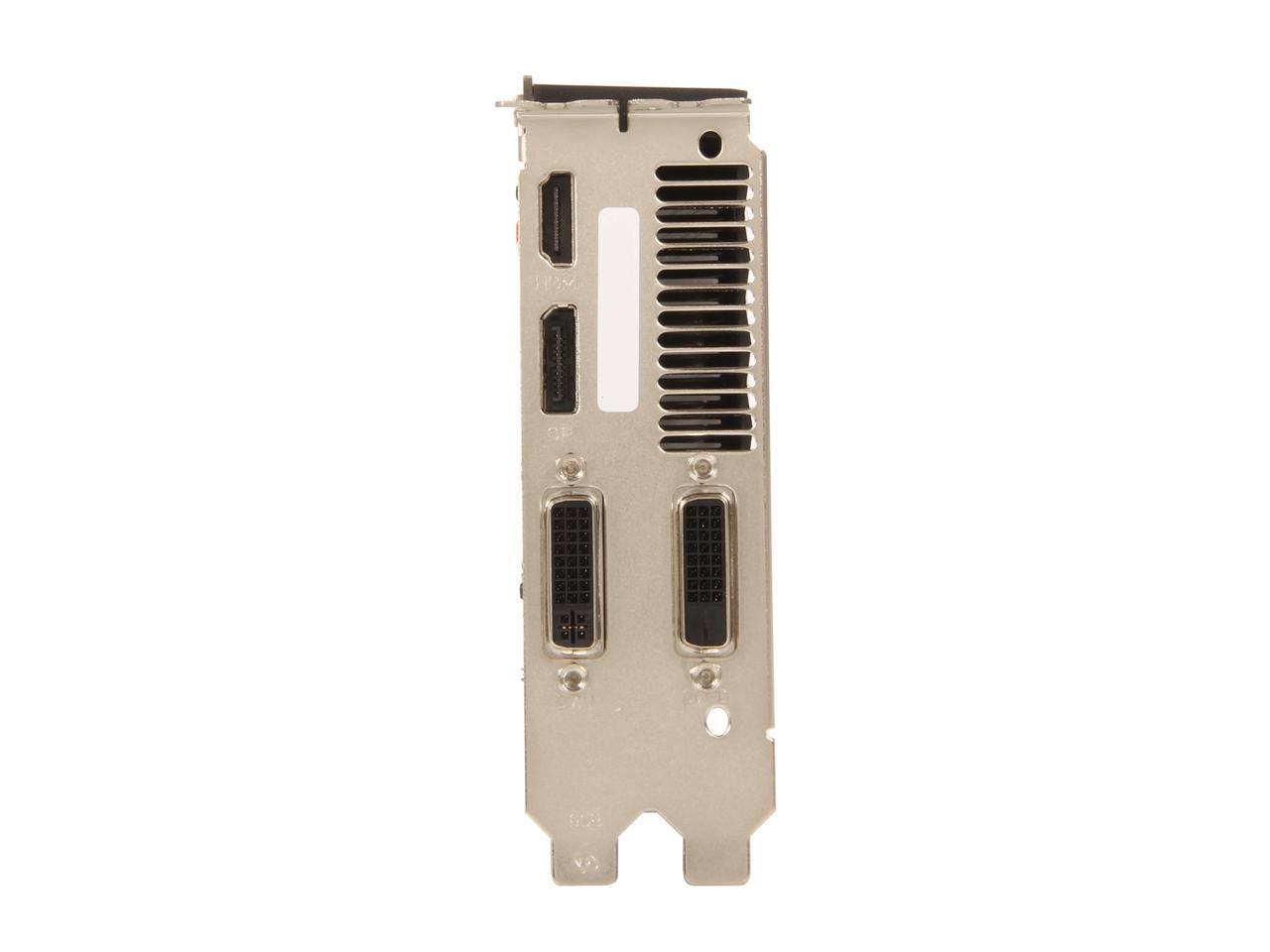 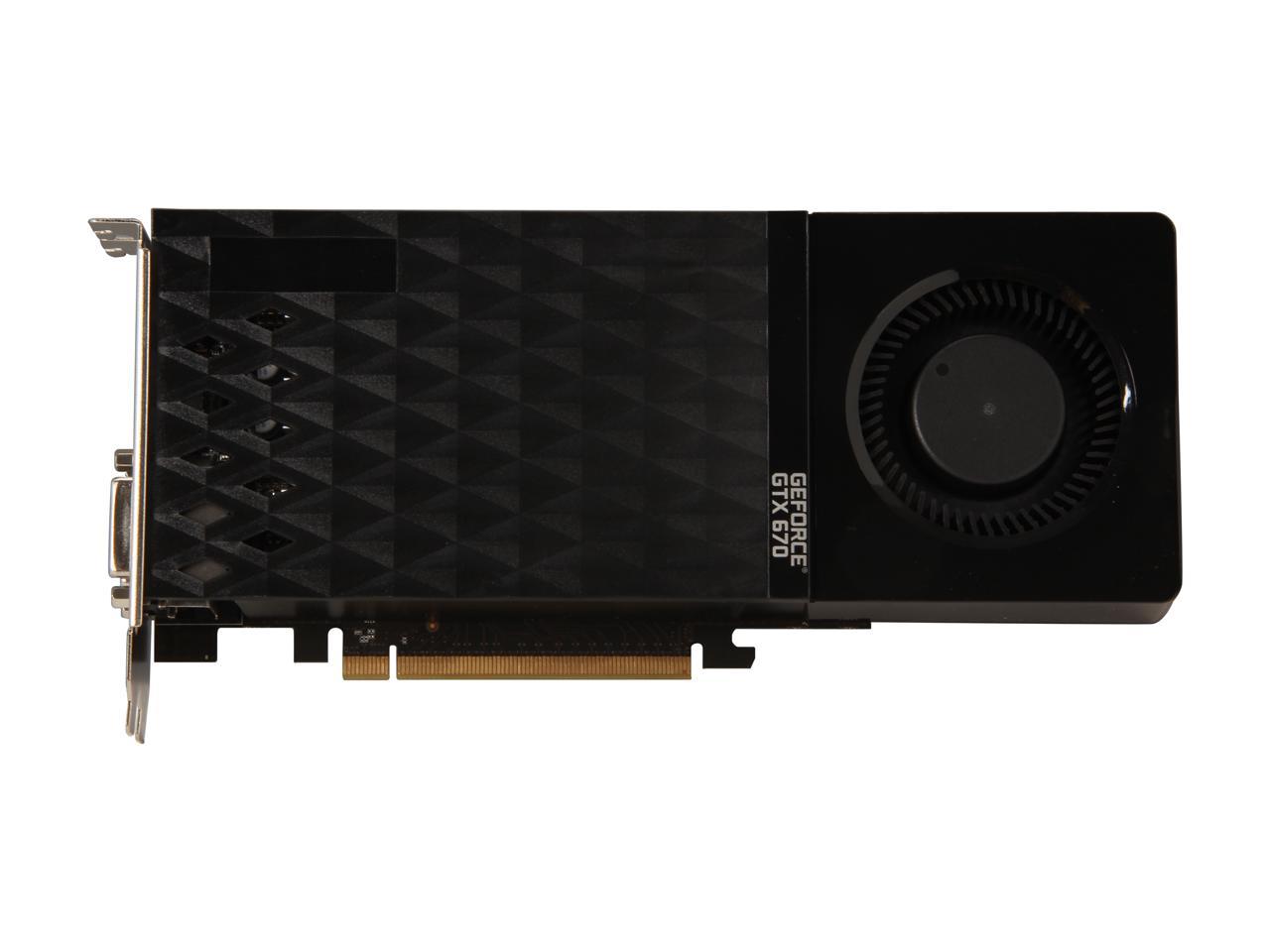 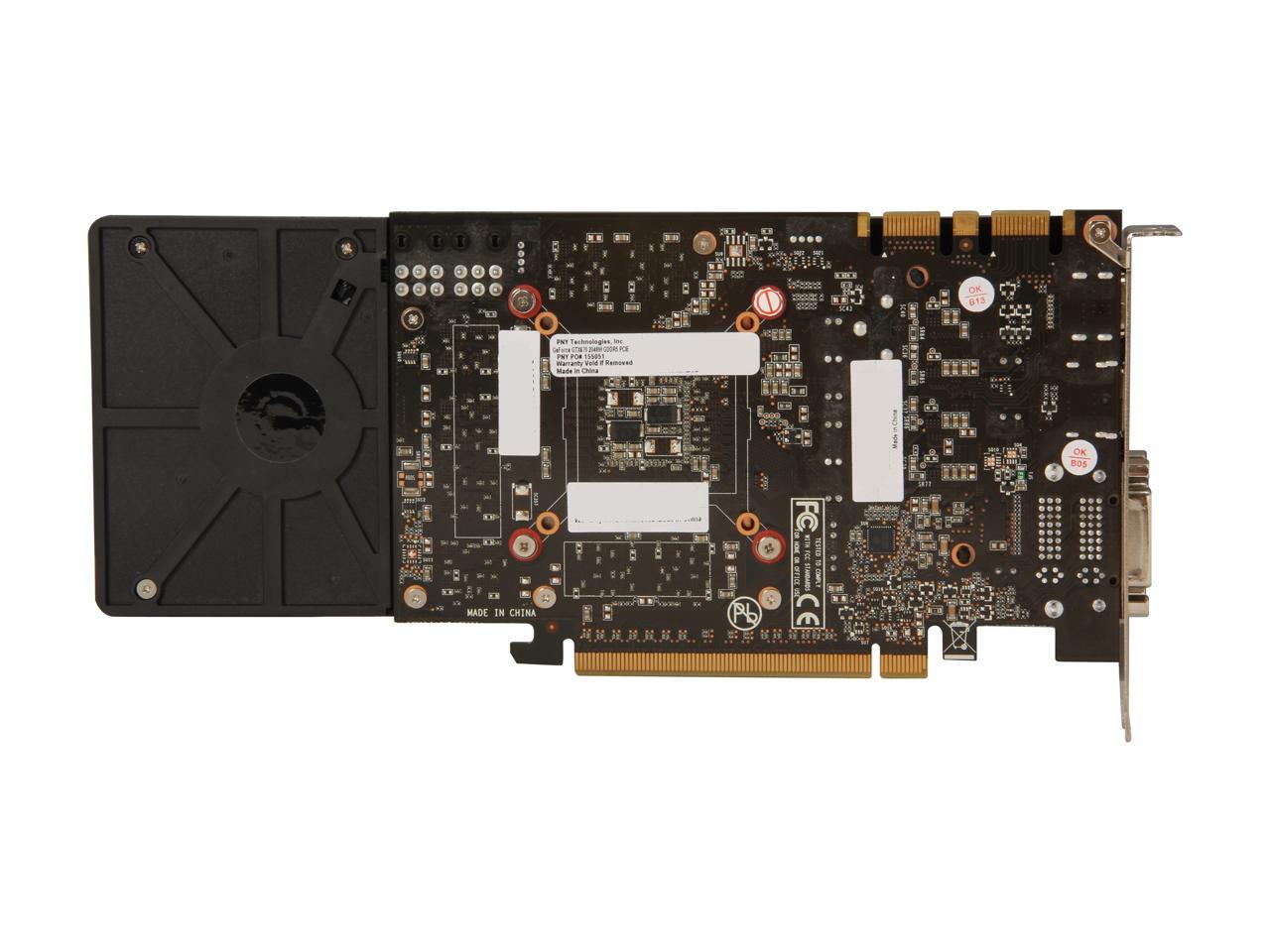 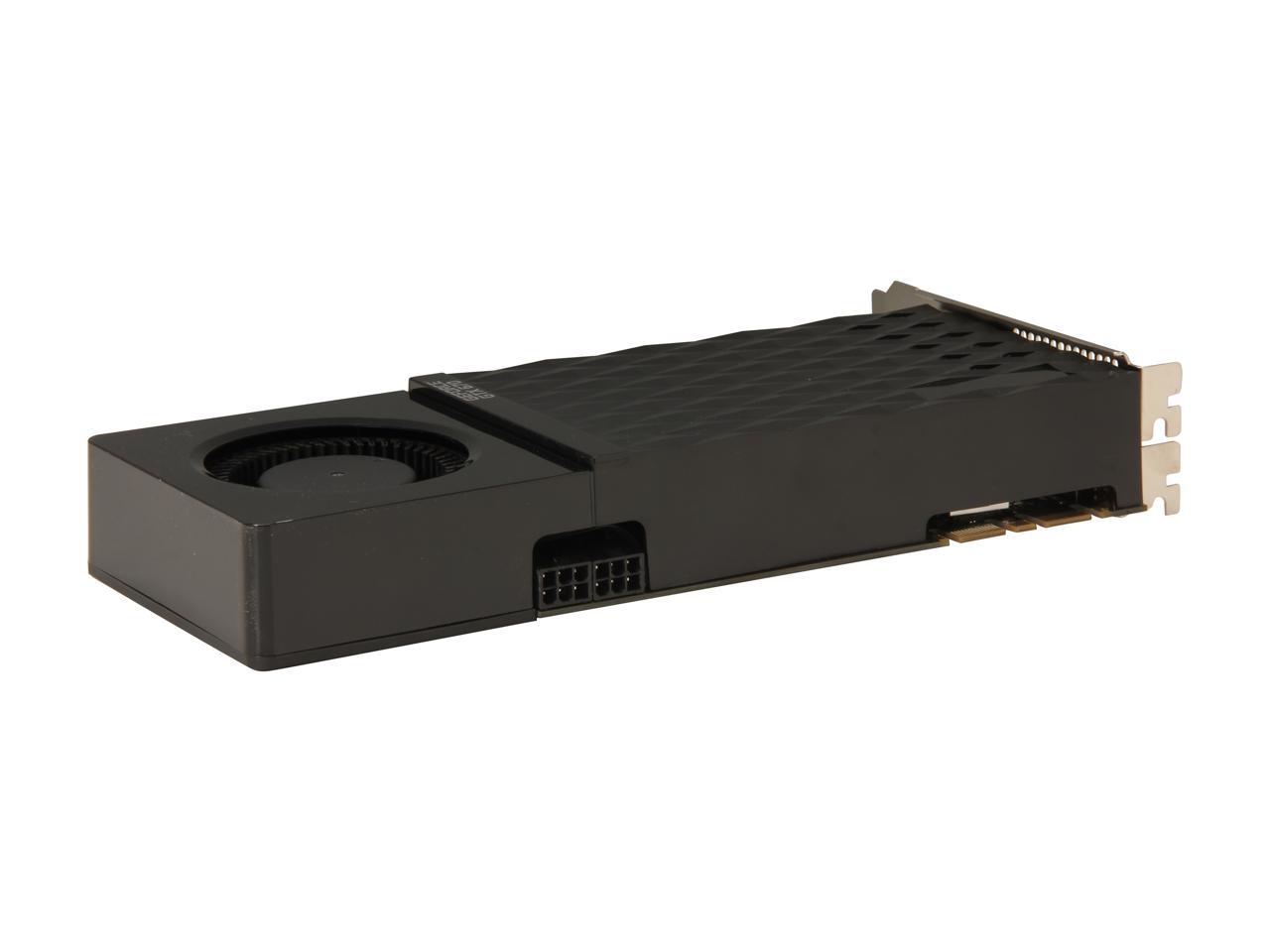 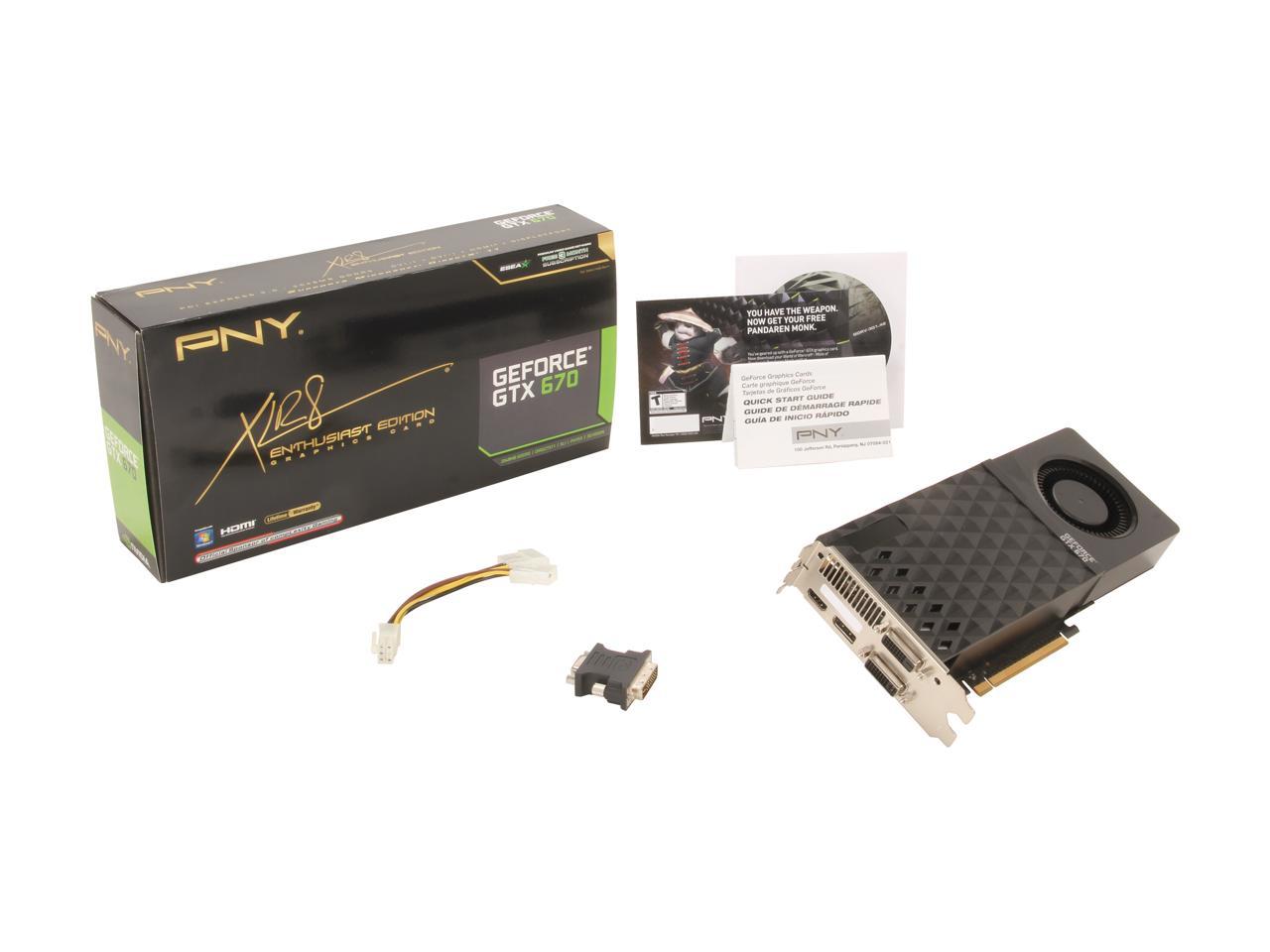 With HDMI interface, the PNY VCGGTX670XPB allows you to immerse yourself in HD or full stereoscopic 3D gaming. Take your game to the next level by connecting your graphics card to your HDTV or HD monitor with an HDMI cable. Experience the gaming prowess of your graphics card. Game like you've never gamed before.

Pros: I had two Galaxy GTX 560 GC 2gig cards in SLI with a generous overclock(also bought on newegg) and just one of these PNY 670s is faster. I can play Battlefield 3 on Ultra with AA/AF maxed and get a solid 85 FPS average(often see it spike 100+)with my 2500k cpu with one of these 670s. With both 560s OC'd it would sometimes drop into the 30s with the same settings in scenes with a lot going on. I had to keep AA/AF off with the 560s to keep a smooth experience. I bought 2 of these 670s with the sale and run them in SLI with an intel 2500k at 4.5ghz. I get FPS into the 100s with both of them running, but I have to be honest here: I get the same perceivable smooth perfect performance out of just one as I do with both! No microstuttering whatsoever. Running triple monitor (nvidia surround) the second card does help and that's really the only reason more than one would be needed for BF3. Triple monitor and 3D. I also had an EVGA GTX 660Ti and this 670 keeps your fps up considerably. Long story short, after owning almost every card(I have a video card addiction) from every series since the Geforce 3Ti 64MB, the GTX670 is by far the most fun I've had and the best I've felt about spending so much money on one....ever. If you are troubled between choosing the 660ti and this do yourself a favor and save up or jump on a sale and get this. You will not regret having the power of the GTX670.

Cons: Fans get loud at 65%+. I don't mind loud fans, but I can see how a lot of people might be bothered by these. Plain looking thin plastic fan shroud but we know this before we buy. Not much to complain about. They do run a bit hot but it doesn't cause any issues. I'd consider aftermarket cooling for better noise and heat control...plus it just looks sweet!

Overall Review: I noticed that even with a good overclock on the 2500k when in SLI in BF3 the 670s are rarely if ever at 100%. Usually at around 75%. Thought maybe the cpu was holding them back so I played around with clock speeds and found that indeed with oc the GPU usage improved. Makes me eager to see what Intels next will have to offer!

Cons: Reference cooler is really loud and annoying, has a high pitch buzz, even at idle. The cooler does not perform well, so if you plan to overclock, be prepared to get use to the sound of an airplane engine in your room because you need to keep temps below 70 degrees before the card throttles down and the only way to do that is to keep the fan at MAX. If you don't plan on overclocking, card should perform normally with fans at 55% which is borderline annoying. I emailed PNY to see if I could install an aftermarket cooler without voiding my warranty, nope. $350 card and no warranty? no thanks, going to return and buy from a different brand. So why should I waste my money on PNY when I can spend around the same amount on other manufacturers who will allow you to install aftermarket coolers, as long that you install the original cooler when sending in for RMA.

Pros: Awesome performance. I Have a friend with the same spec computer but running a GTX 680 and the frame rate difference on most games are negligible. He only get's about an additional 5FPS on the games we compared (Dirt3, Crysis2)

Cons: Wanted to run this card with Adobe Premier CS6 and it won't work without a simple hack (editing a document to support the card). Otherwise the mercury engine works.

Overall Review: To the guy who gave this 1 egg because it didn't work with his computer--please realize you should be rating the product and not it's compatibility with your computer. If it doesn't with your computer then you shouldn't rate the card since you don't know how it performs. Give your Dell one egg not the card.

Cons: Although this card chews up and spits out any game I have at maxxed out settings @ 1920x1200, it does so with a bit of noise. The card is quiet at all fan speeds compared to my old GTX 260, but at idle it emits a high pitched whine. Based on other reviews/reports, this is not a defect but normal for this card. This seems to be bothering me more and more every day.

Overall Review: Like others have said, the card you get does not match the pictures on Newegg. The new card has additional ventilation holes that will let some hot air escape into your case.

Pros: It works well with no issues so far. Excellent value for the money. Lifetime warranty if you register.

Cons: Product does not look like the picture shown and box did not contain an hdmi cable as shown in the pictures and stated in product description when purchased. As a previous reviewer recently posted, the cooler is plain looking with no real graphics or writing and has several vent slots on top of the shroud allowing some heat to be vented back into the case (pictures need updating).

Overall Review: I dropped an egg off due to no hdmi cable and the product not designed as in the pictures or pny's website (which doesn't look like neweggs pics or the actual card and still lists an hdmi cable).

Pros: Works as advertised. I bought this card several weeks back from another un-named site at a tad better price. And I have to say it lives up to the PNY Technologies name. Yes it's basically reference, but if you're having heat problems just run MSI Afterburnner or another 3rd party program to setup a custom Fan speed curve, this will alleviate any heat issues you may have. I've had no heat issues what so ever and have also OC'd the card a little bit. I was unable to hit the coveted 1300mhz or golden 1400mhz clocks but you must remember this card is a 670 reference PCB, not the 680 PCB other companies with factory overclocks are using for this 670. I've owned other PNY cards in the past and have always had great results. Can't say the same for the EVGA cards I've owned. That being said, I've already orderd my second PNY 670, which should be here in a couple days, to SLI with the one I'm running now. Oh, and it has a Limited Lifetime Warranty after Registration!!

Overall Review: Would be awesome if PNY started putting out some XLR8 Edition 670 cards that had custom aftermarket cooling on the 680 PCB. Other than that all I can say is, in my expereince PNY has always sold Top Quality products. I have never had a problem with anything I've ever bought from them. I still have a 9800GTX+ 512mb XLR8 that I OC'd the heck out of way back when it first came out. That card is still being used, after all these years, in a spare PC OC'd and all.

Pros: It's a GTX 670 - read the benchmarks if you don't know, but this is one of the fastest single GPU cards you can buy right now. It exhausts hot air outside of the case.

Cons: No fancy add-ins or overclocking software, but this can be found from other places for free. You get the card and that's about it.

Overall Review: EVGA is my preferred graphics card vendor for nVidia, but we'll see how it withstands the test of time. Several months with zero issues so far. For the price I got it at, it was unbeatable. No regrets.

Pros: Obviously powerful card that will take anything you can throw at it. Battlefield 3, Planetside 2, running everything much better than I hoped it would and am thoroughly impressed with the card.

Cons: Absolutely be extremely wary when dealing with PNY. Could not locate an email or a telephone number that lead to a real customer service representative that dealt with rebate issues. If you plan on buying this card because there's a rebate tacked on, then you're probably better off looking elsewhere. Very irritated while I look for a customer rep.

Overall Review: Loses two eggs because of business, gets three eggs due to great card.