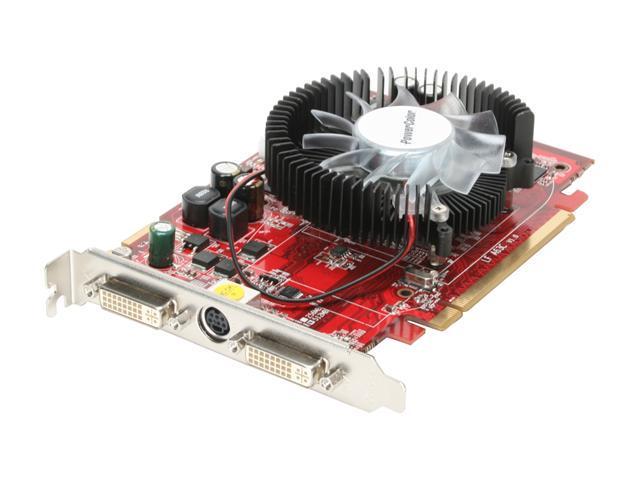 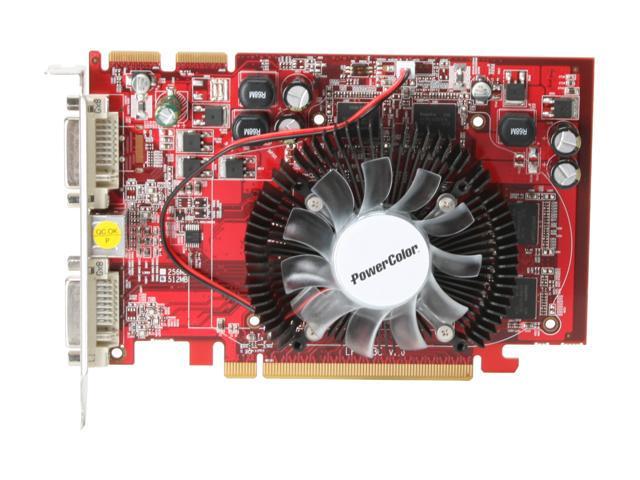 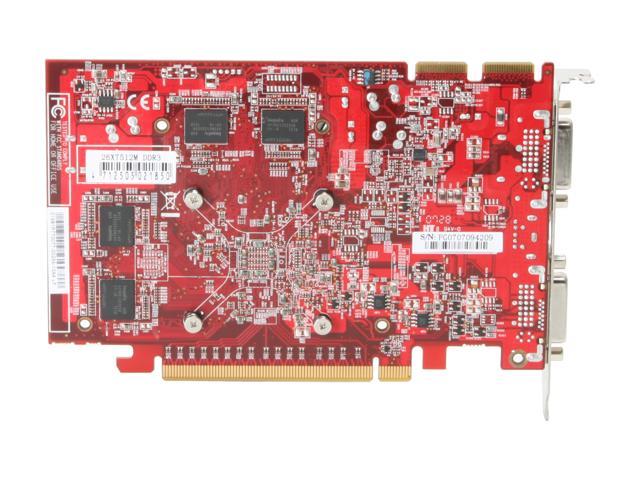 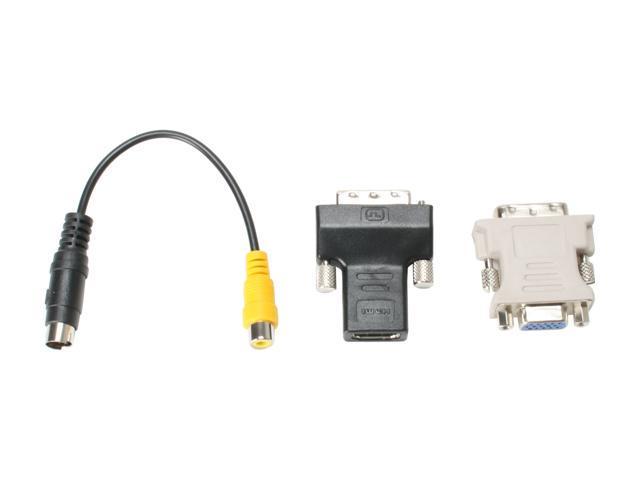 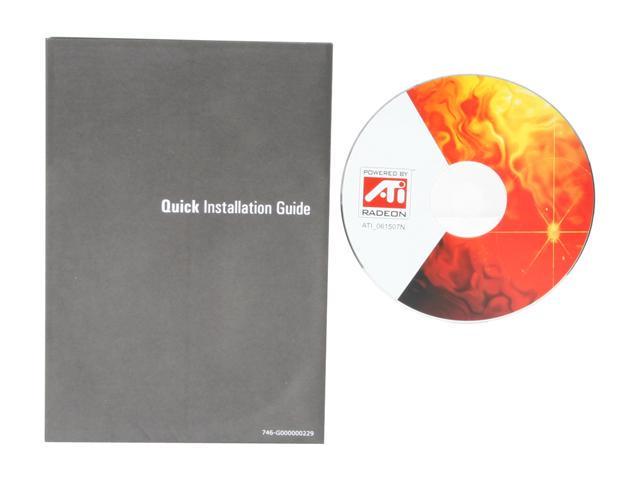 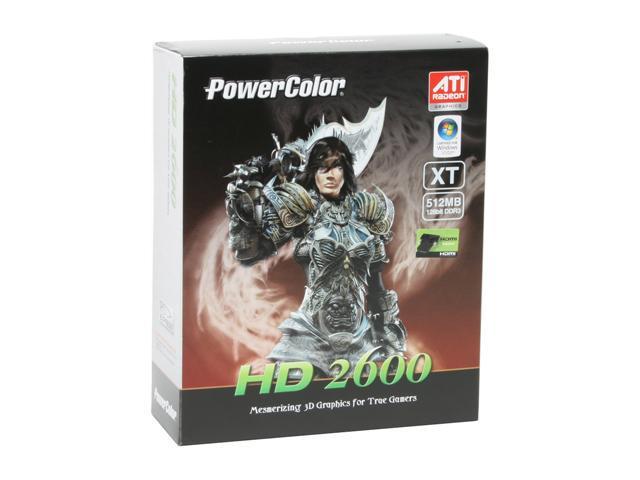 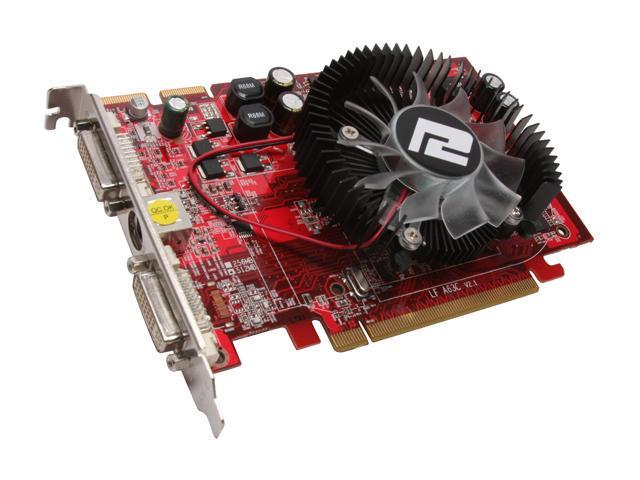 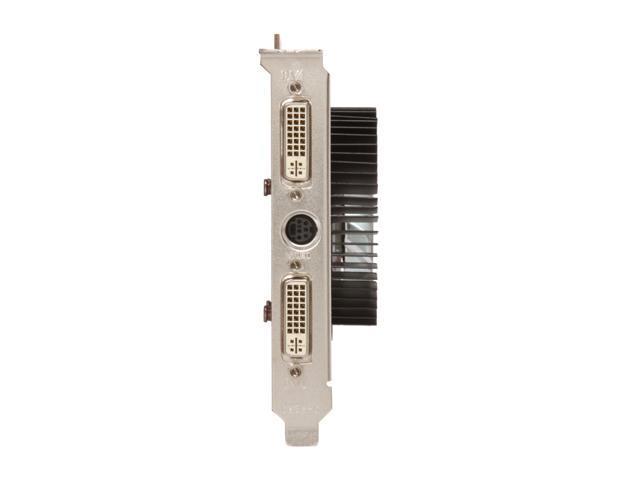 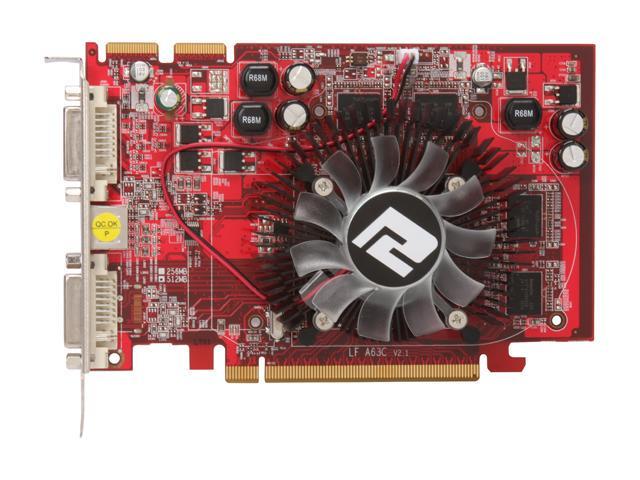 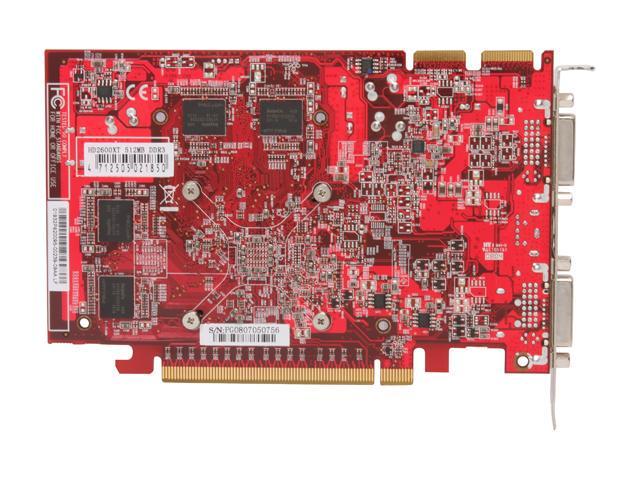 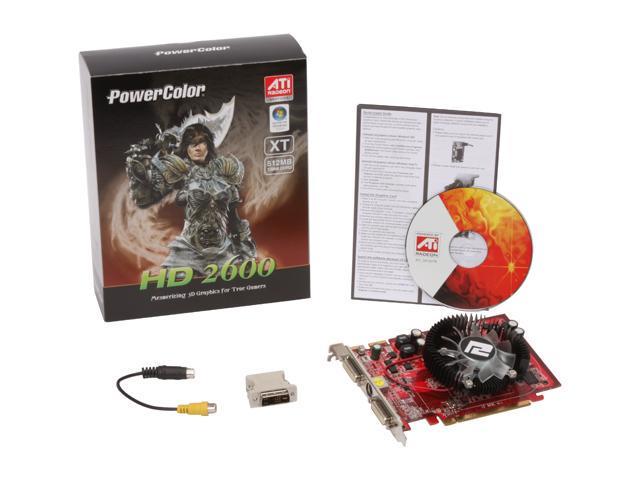 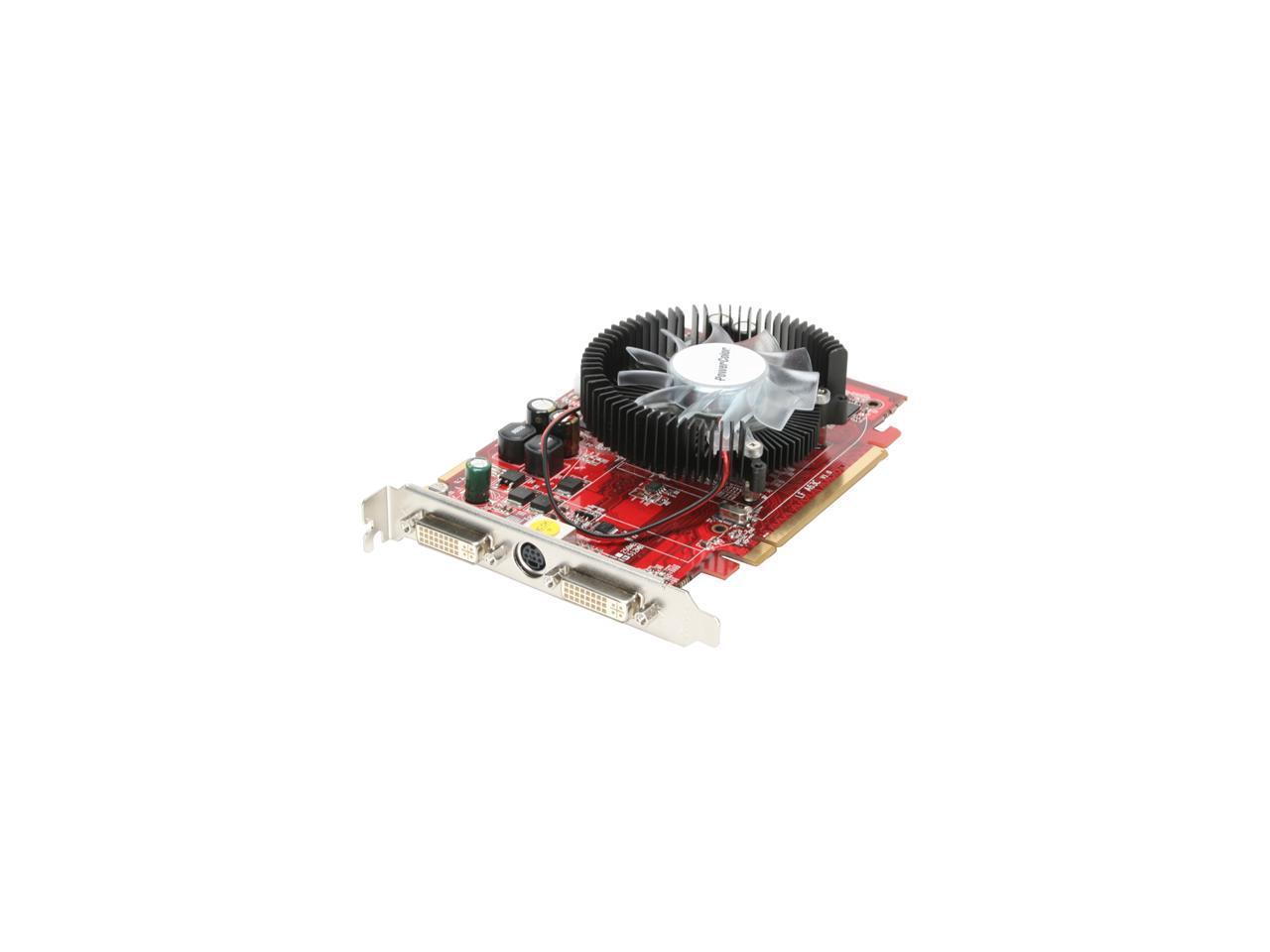 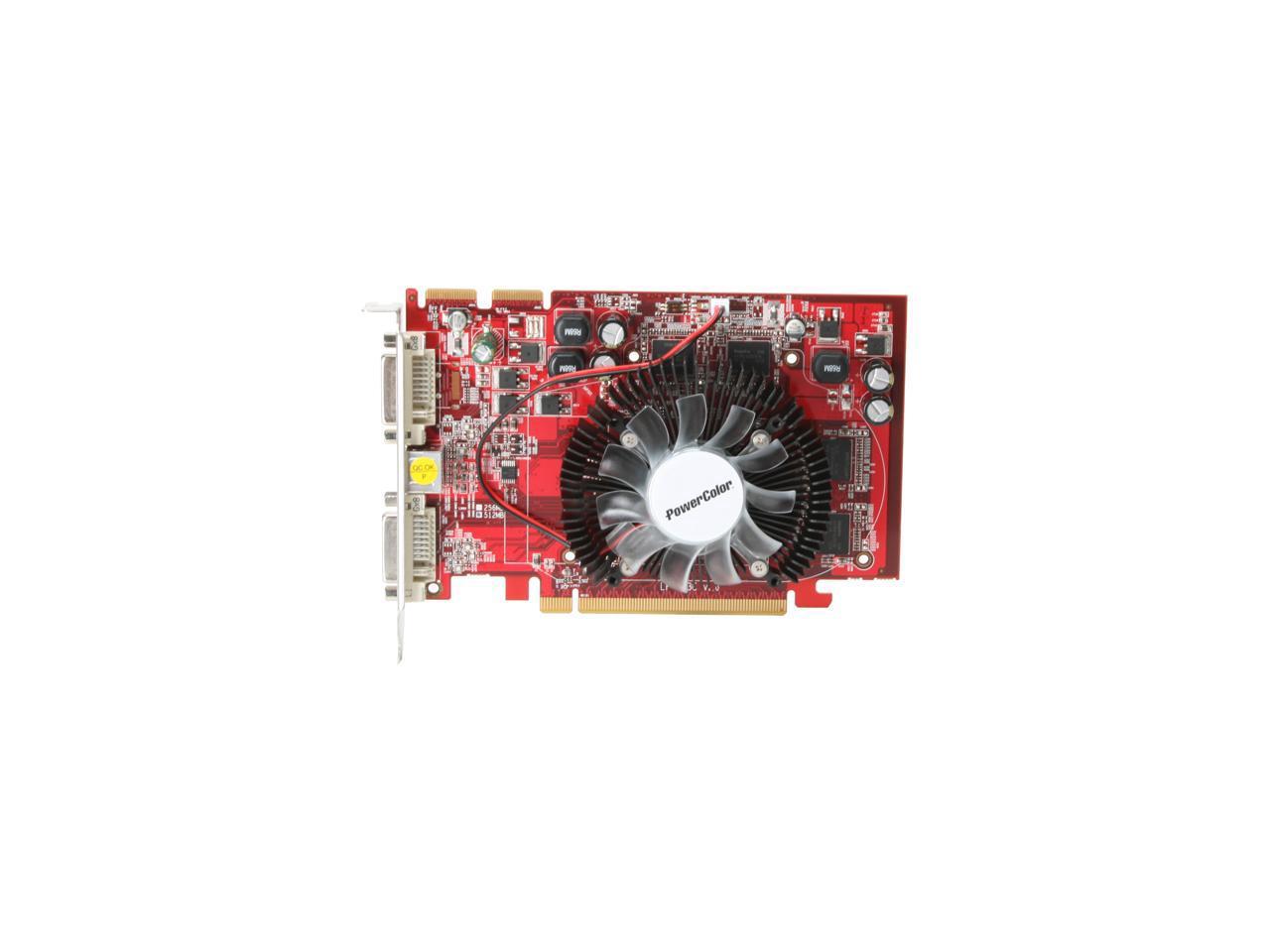 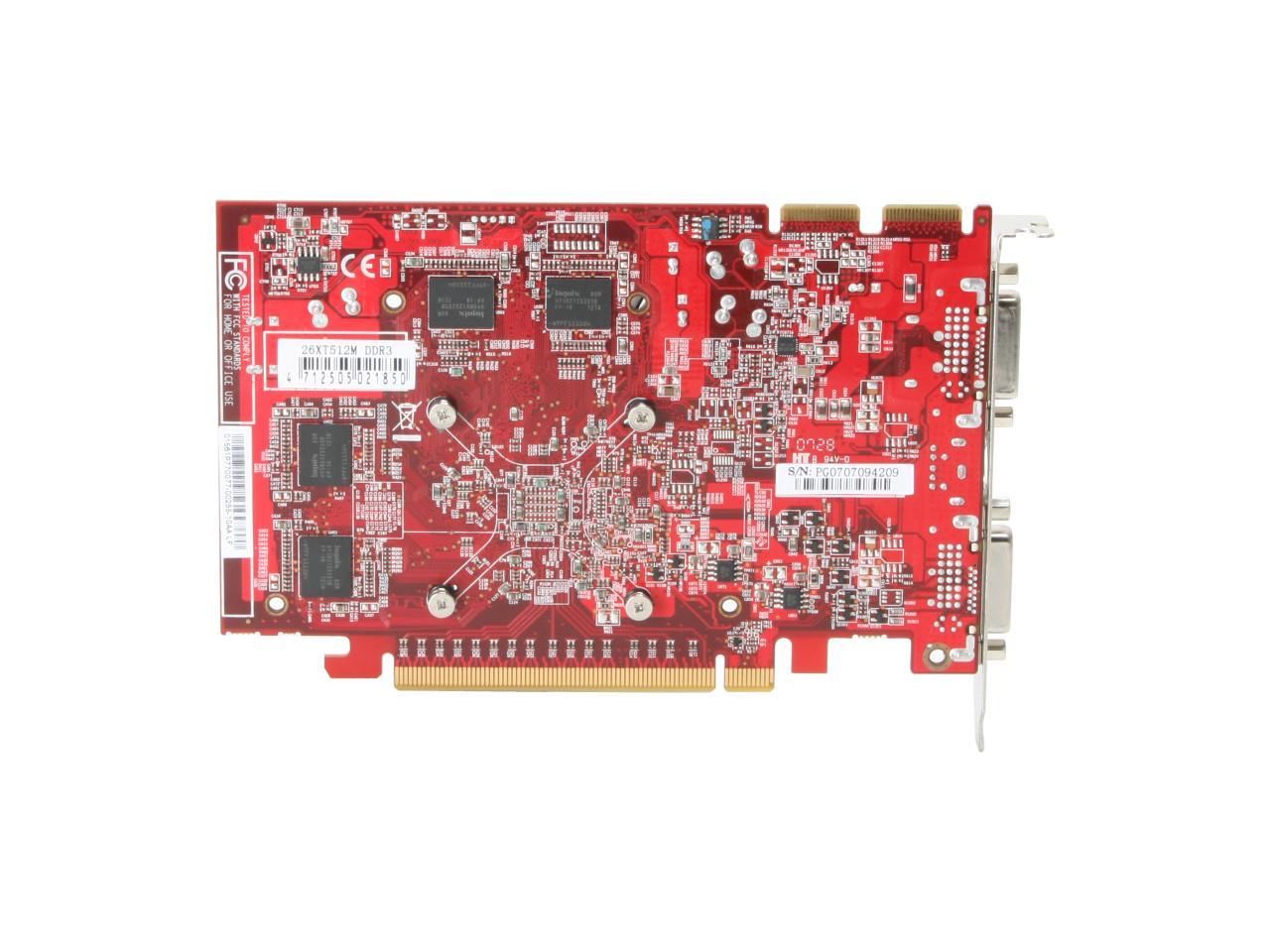 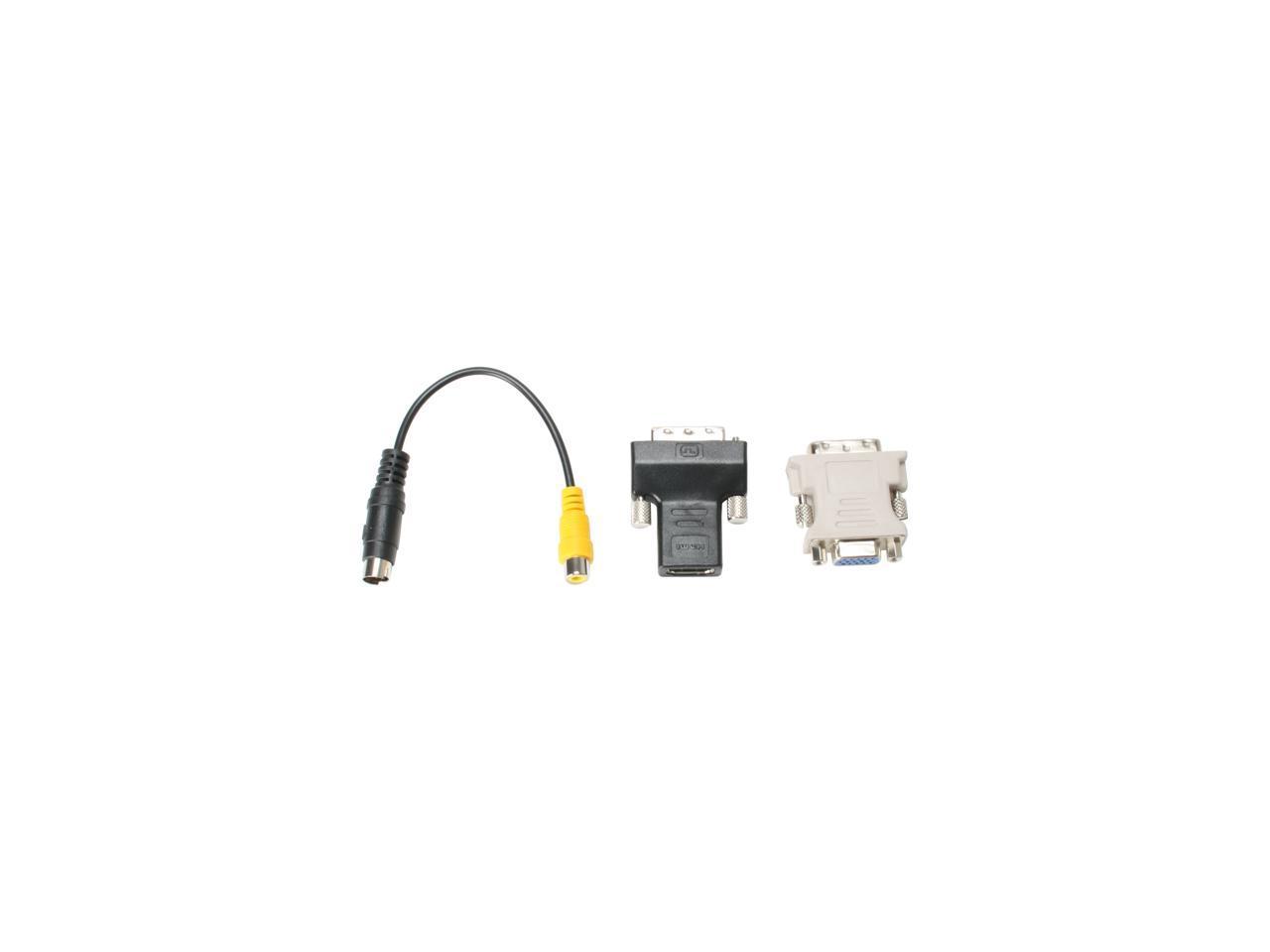 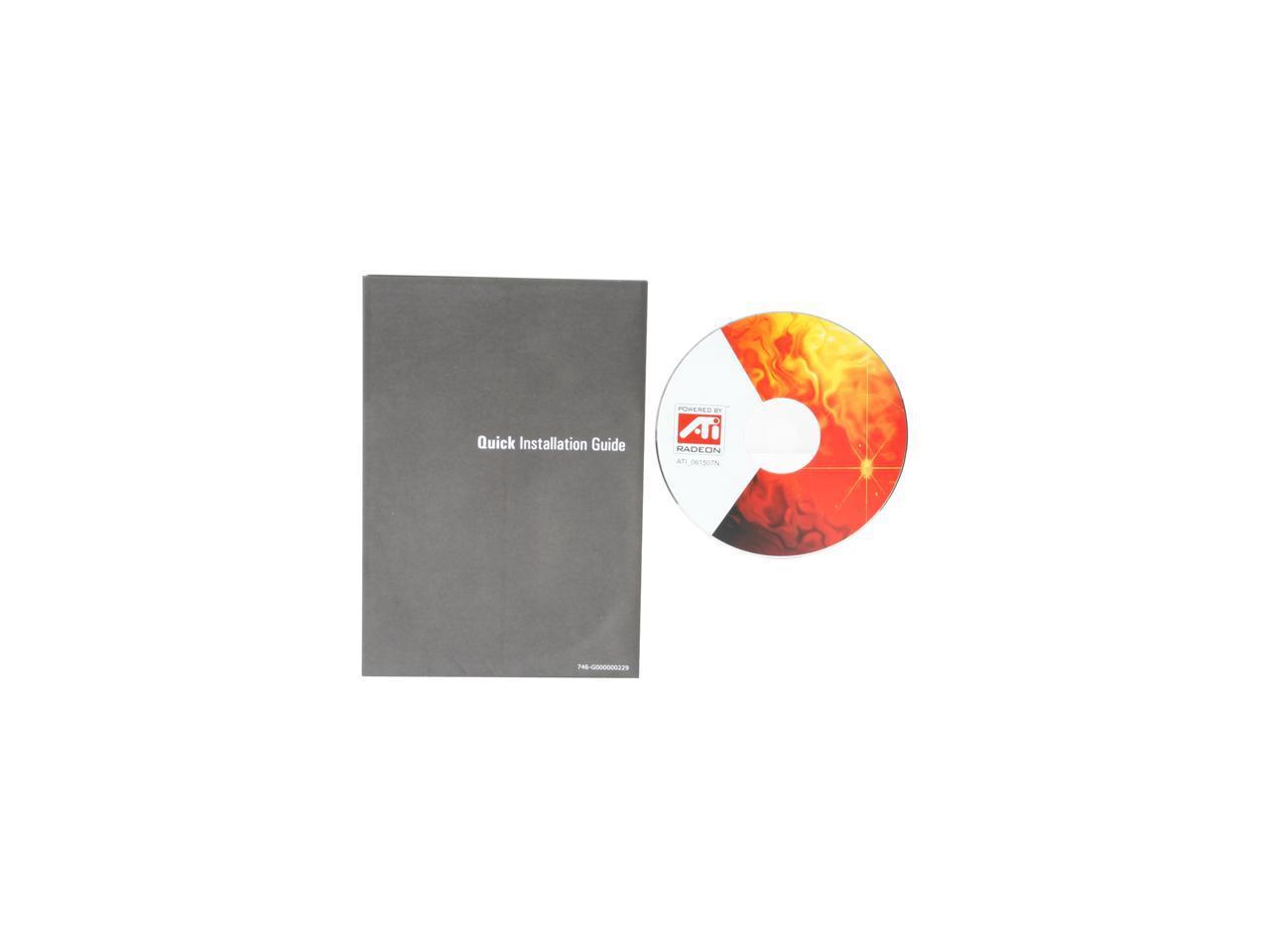 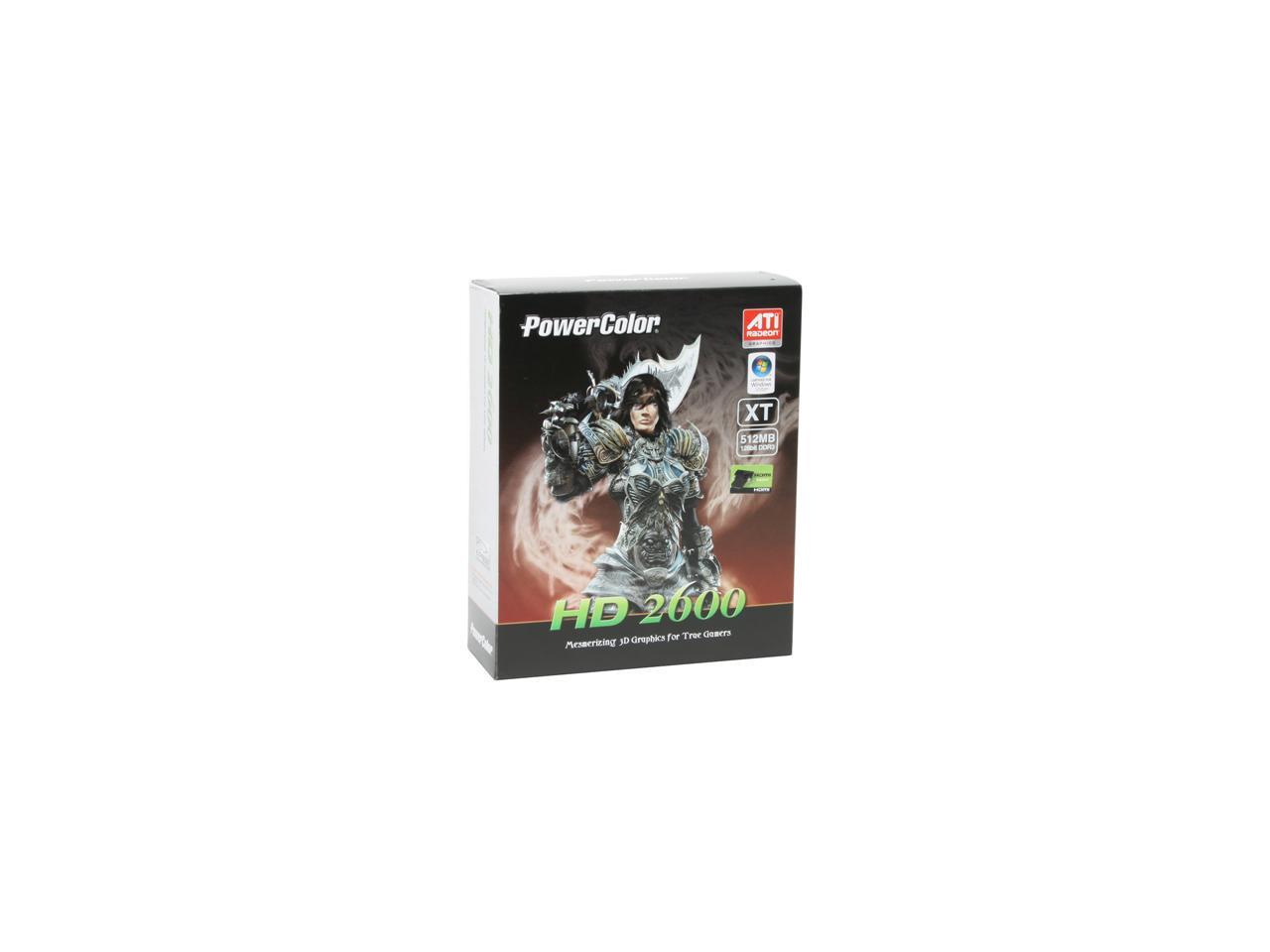 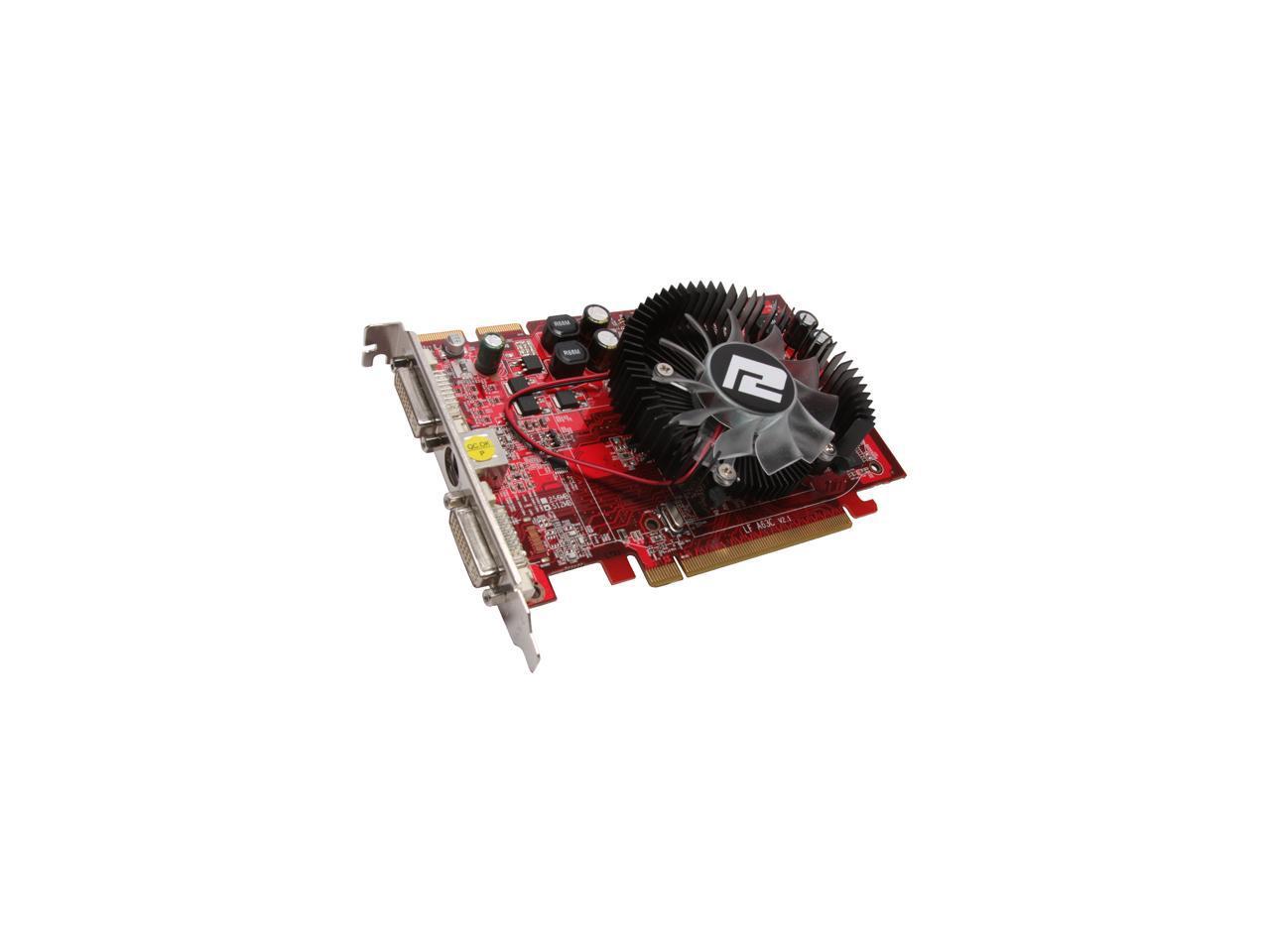 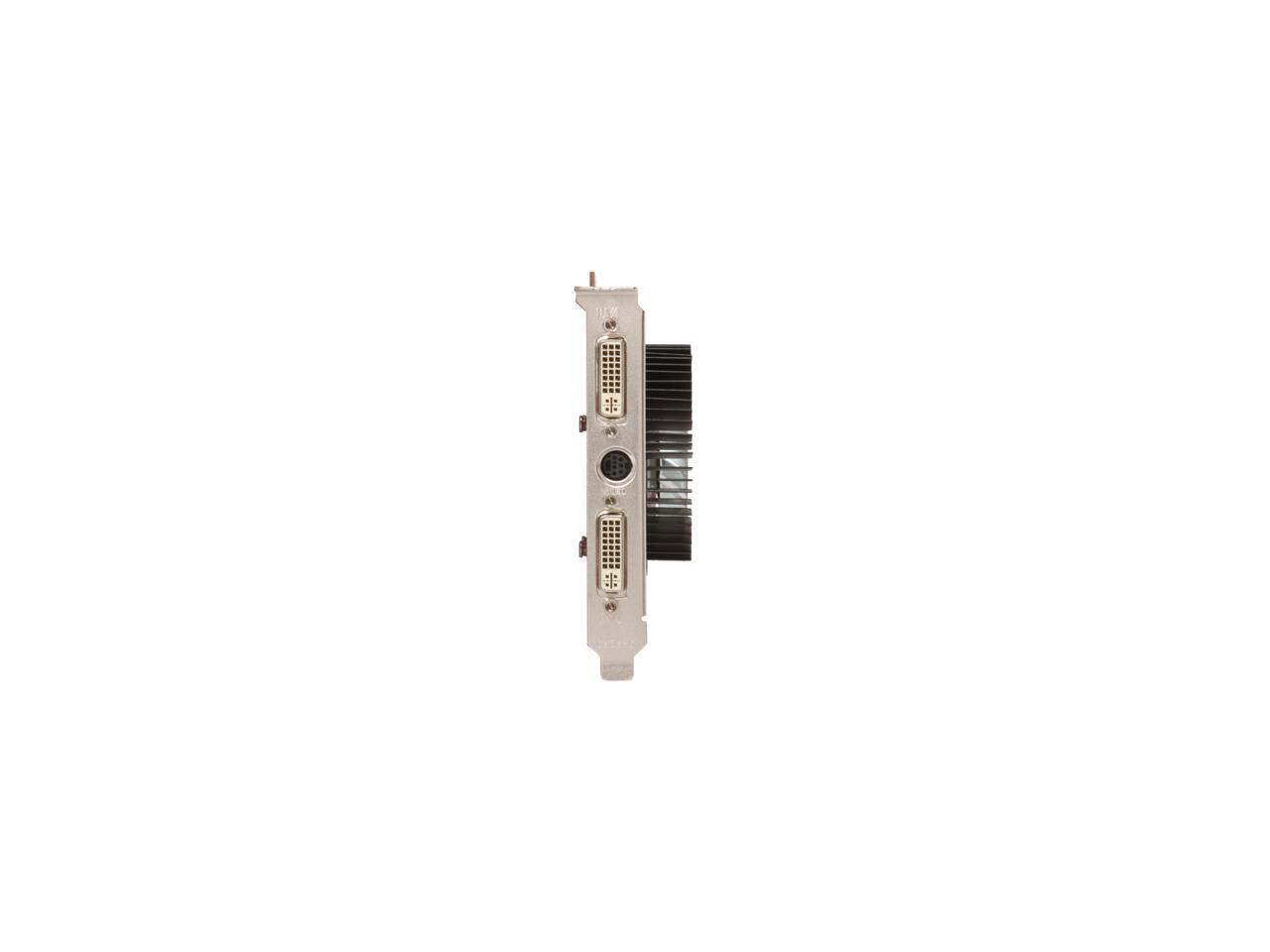 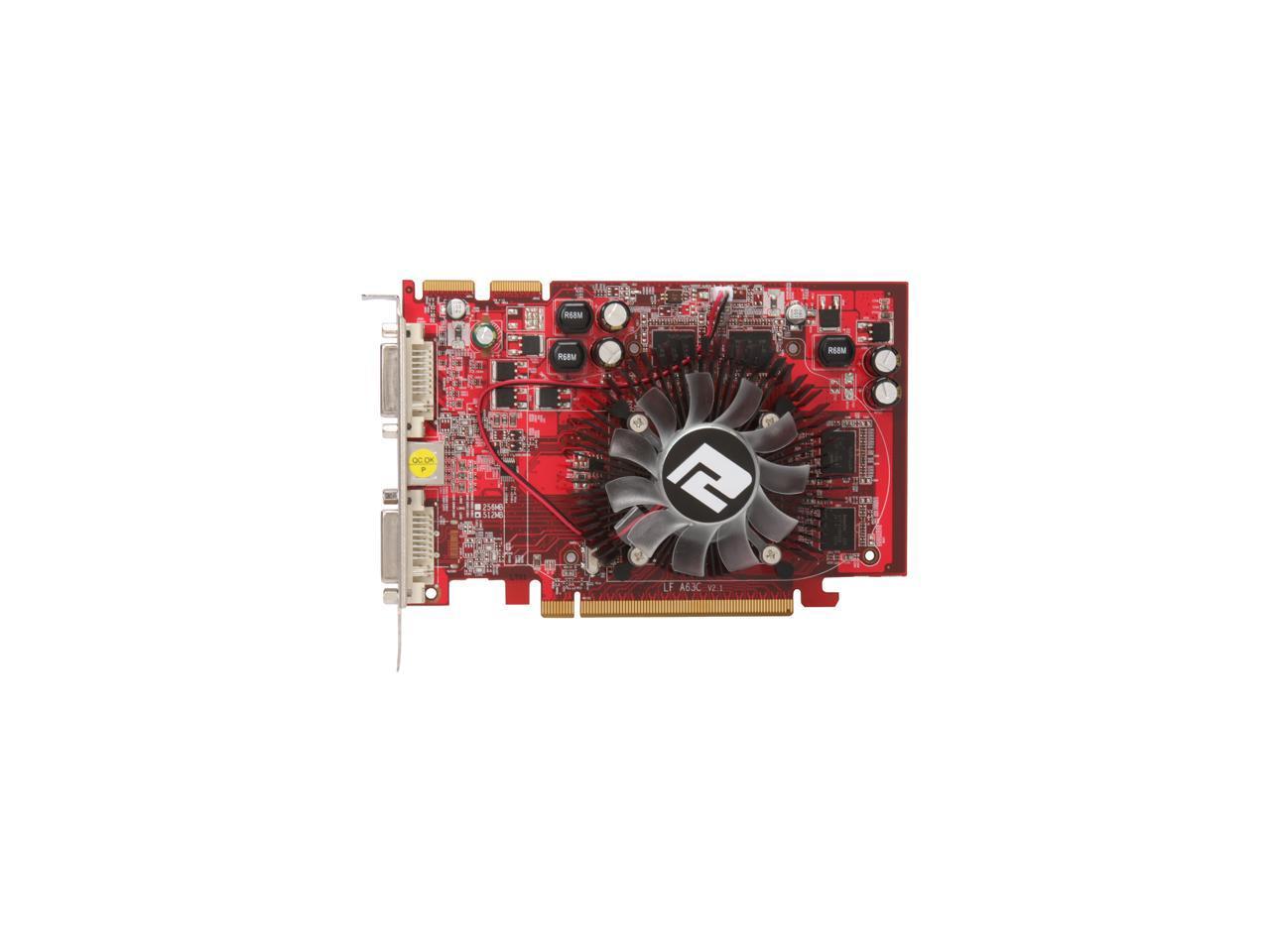 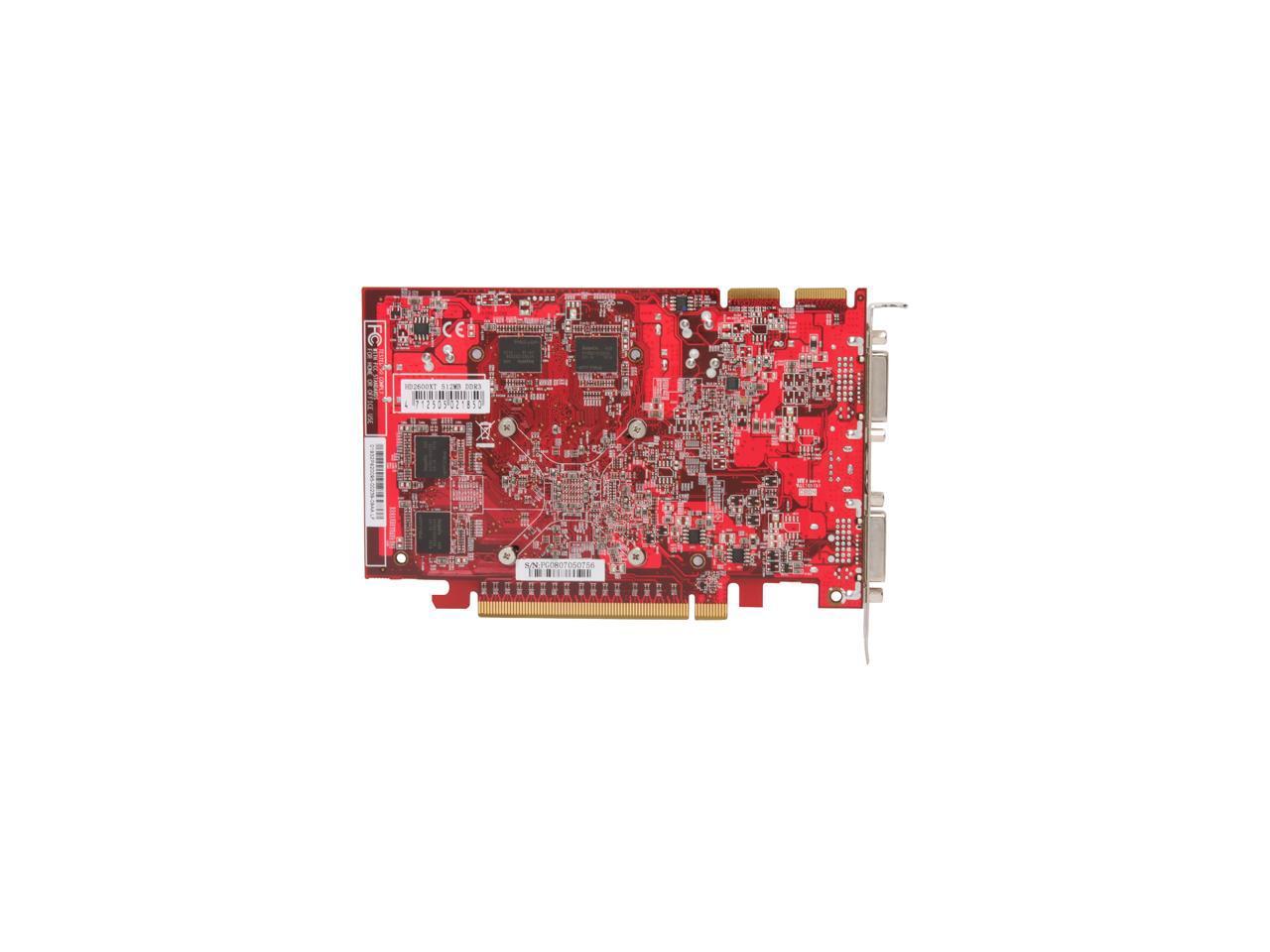 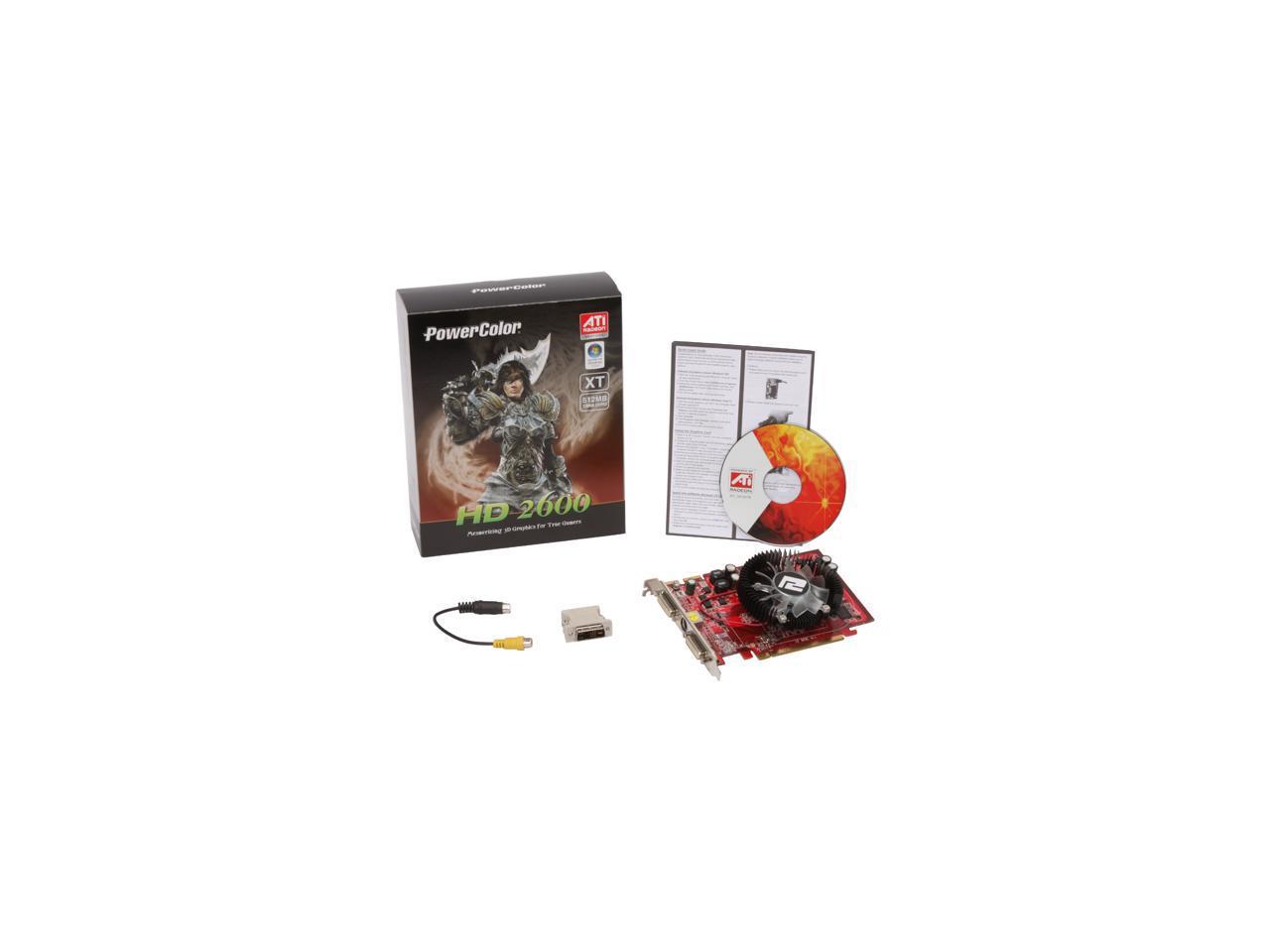 (74) Write a Review
OUT OF STOCK.
Specs
Reviews

Pros: So far, the HD2600XT has improved my Vista experience on my old HP Pavilion A630N, replacing my ATI X700 video card which became problematic after installing Vista, and runs Aero interface flawlessly. Quiet Card, runs all the games (mostly older titles) that I'm interested in and World of Warcraft. As noted before, you will lose a PCI slot due to the size of the fan on the PCIe, but I gained another by removing the modem that was taking up space.

Cons: None that I can think of other than go to the ATI website and download the latest drivers.

Overall Review: Bought more RAM (Crucial Brand) from New Egg as well and Vista Service Pack 1 is seeing all 4GB! Add that HD2600XT and I may not have to downgrade back to XP after all.

Pros: Runs the "Crysis" demo on mostly high settings (shadows and shaders on medium) at 1024x768 resolution and performs very nicely. People who say you need an 8800 Ultra to run it at decent settings is exaggerating.

Overall Review: Excellent bang for the buck -- honestly. (Just be sure to download Catalyst 7.10 drivers.) I initially just wanted this temporarily for my Vista upgrade, but I'd consider keeping it longer than I anticipated.

Pros: i upgraded from an ATI x1550 to this and it is SUCH a difference. i play the game Oblivion and i was able to play that game at max graphics and it was seamless. absolutely amazing.

Cons: the fan is a bit bulky, but w/e its worth the one pci slot it covers

Pros: Cheap cheap cheap but works great. Installed with vista and using direct x 10... Crysis looks amazing. Played with Far Cry 2 and it was decent. Direct x 10 is where I think the difference comes in. No problems so far, install was a breeze

Cons: Fan doesnt have a shroud to pull outside air in through a vacant slot like some of the other cards do however I dont think it necessary.

Overall Review: Power color makes a good product. I don't know what people are complaining about. Give it a shot, its def worth the money!!!

Pros: Card worked like a dream from install. have had NO problems playing anything I wanted. Then again I got lucky. Bios and ATI control Center both report card as having a Gig of Memory not 512MB.

Cons: Runs hot. My case isn't as well vented and because of the card position in my case, it over heated the HIS HD2600xt card i had it crossfired with.

Overall Review: Either make sure youre case gets a LOT of air movement to cool it, or place the card in a position where it won't heat up oter components in you system.

Pros: This is a great card for the money. Plenty of memory - 512MB as well as DX10 support. Good frame rates with max resolutions.

Cons: Do not buy this card assuming you will get the MIR back. After registering and sending in the required paperwork, they rejected my rebate. I threatened with a bad write up and they they graciously gave me a second chance. It has been a while and I still have not seen the rebate check yet.

Overall Review: It is a 5 star card which has a 1 star rebate committee. I am going to buy another Radeon HD 2600 but it will not be from Powercolor.

Cons: The day I installed it, mother-in-law came to stay 10 days with us. Coincidence???

Overall Review: I am extremely happy with this card so far. Newegg shipping is great.

Pros: Well its cheaper and faster than my X1600Pro that I used for about 2years. Updated ATI driver [didnt bother using the included CD] and at first start up I noticed the colors on my desktop were more vivid. Tested out some pics/videos/dvd's and dark to light contrast was really good; no need to mess with custom color profiles. Since I couldnt OC it with ATT, i just benched it once at default and the score was 6967, compared to my X1600 @4000's OC'd. The Vista graphic scores are 5.9/aero and 5.4/gaming, compared to the 4.8/5.1 of the x1600. It has a quiet circular fan/heatsink, which I think works better than those half inch slot coolers because they can be whiney and they trap dust the size of mice. Thats also why I chose to buy this one from the others; you can can-air the heatsink easier without taking anything apart.

Cons: ATI Tray Tools doesnt recognize the card speeds or fan yet, so I couldnt crank up the fan or even modify the clocks or my screen will black out if i touch a setting. Just waiting for an update. Some ppl will probably complain about the size but I have an old Zalman half circle fan ghetto rigged to my x1600 and I dont use any PCI cards, so it doesnt bother me. Also, there is a really large gap between this and the 2900xt. Price and performance wise, this is like half the speed of a 2900xt. So I would say that the 2600xt might be a quick fix if they dont want to whip out 4 bills every few years for a top of the line card.

Overall Review: PC specs - Vista Score of 5.0, AMD Operton165 @2.25Ghz, 2GB GSkill DDR400 , 22" Westinghouse LCD, using ATI display driver ver7.9. GRAW2 at 1280x800 cranked does 35 FPSish; without shadows it jumps up to 50FPS. Tomb Raider Anniversery is a strange game because at 1650x1050 cranked with 4xAA it ranges between 40-130FPS because the "depth of field" effect fades in and out constantly depending on your POV. I had to whip out the late Tomb Raider Legend because I could NEVER get the "Next Generation Content" to play smoothly and this card did it at a playable 30fps/1280x800. Two of these cards are cheaper [and maybe faster] than one 2900xt if u dont want to spend too much.