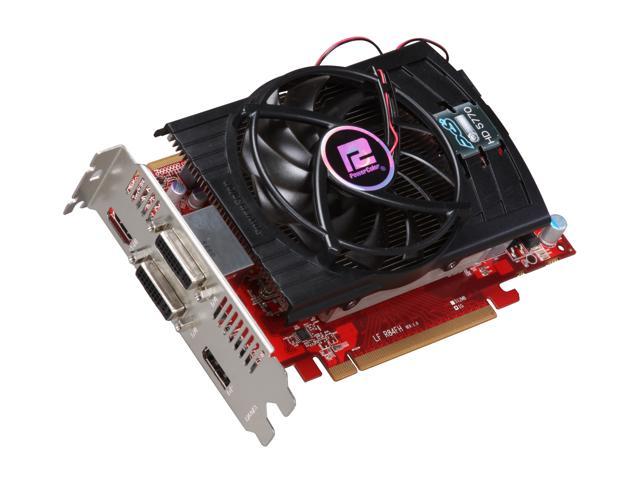 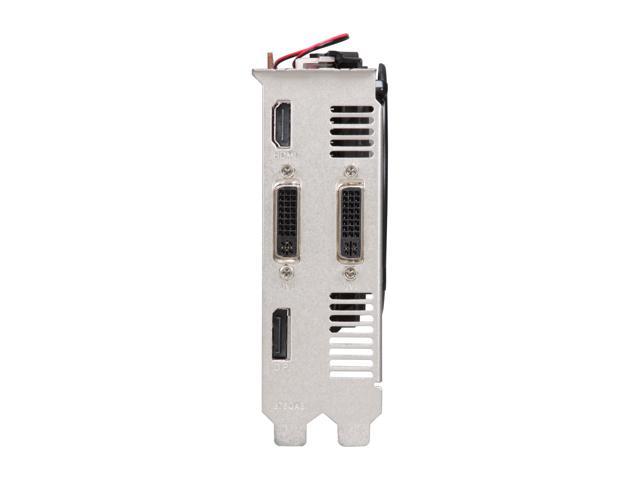 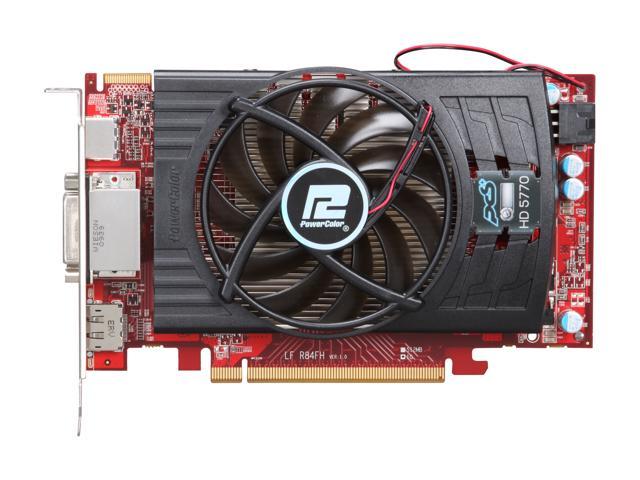 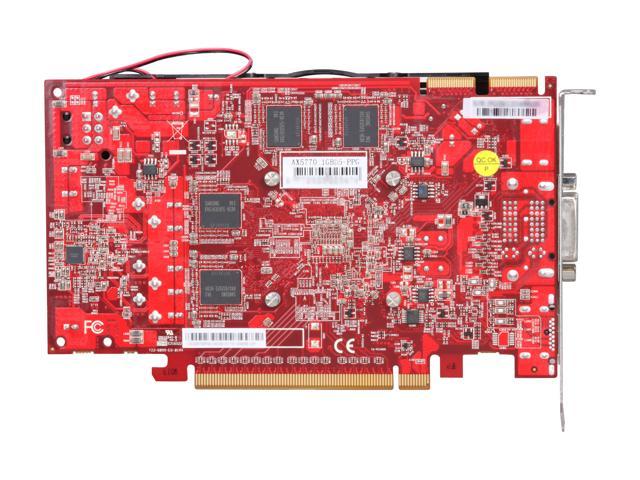 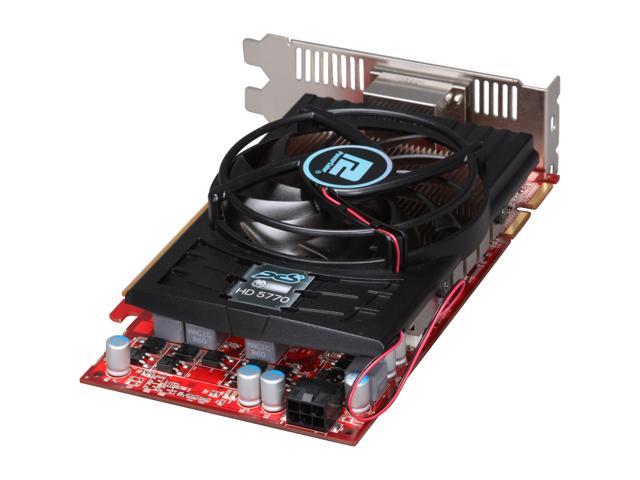 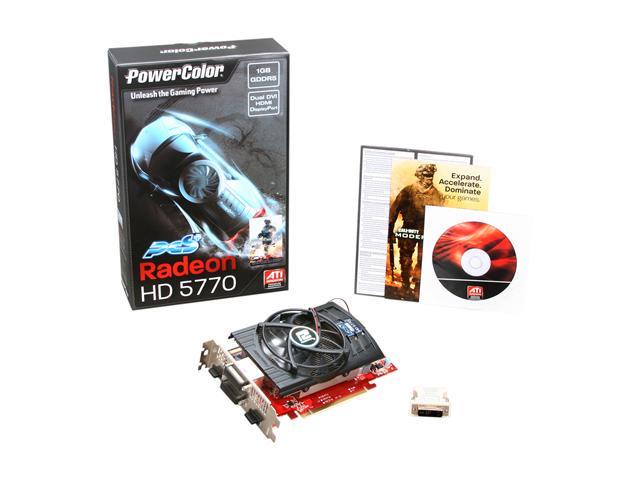 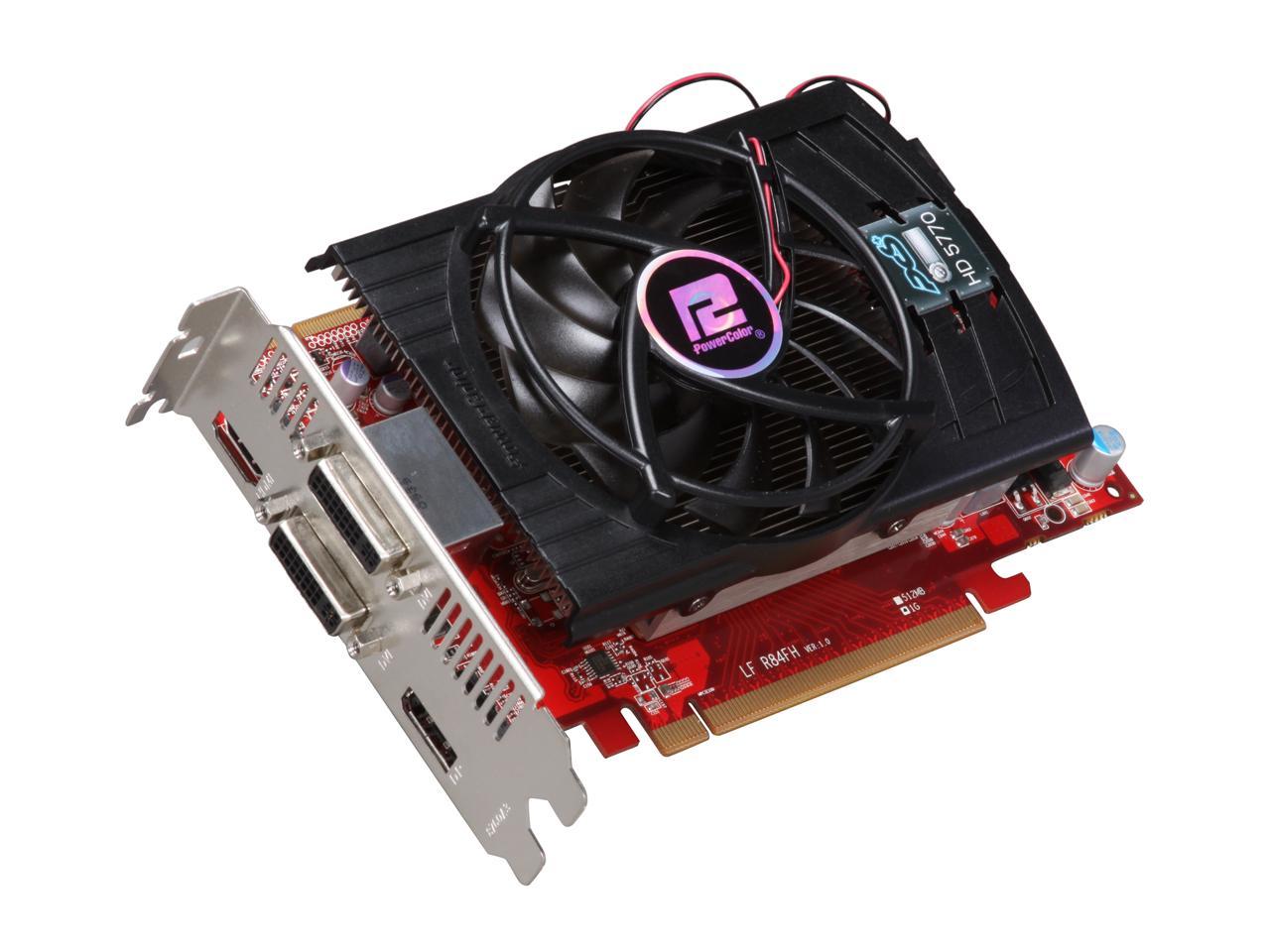 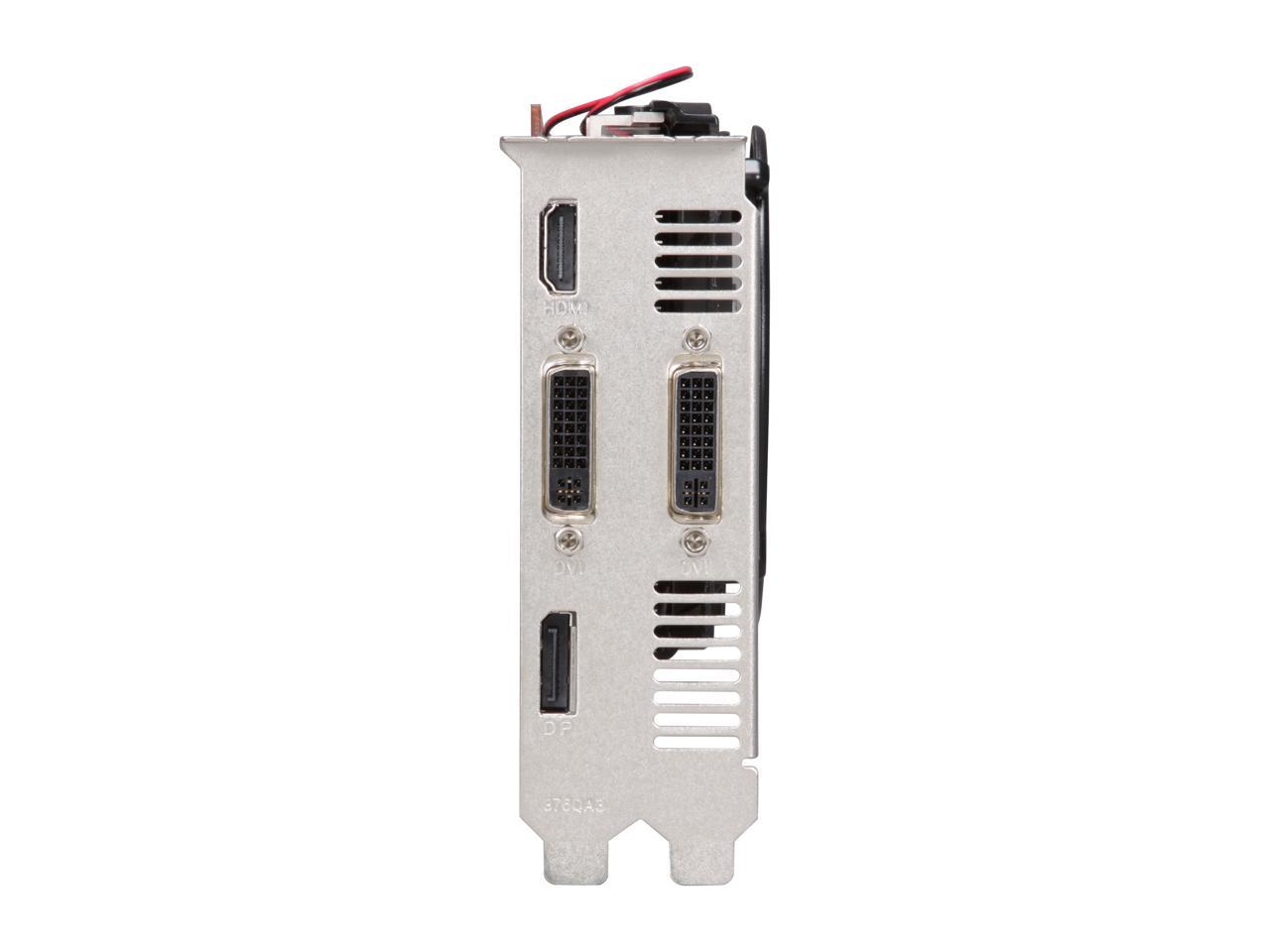 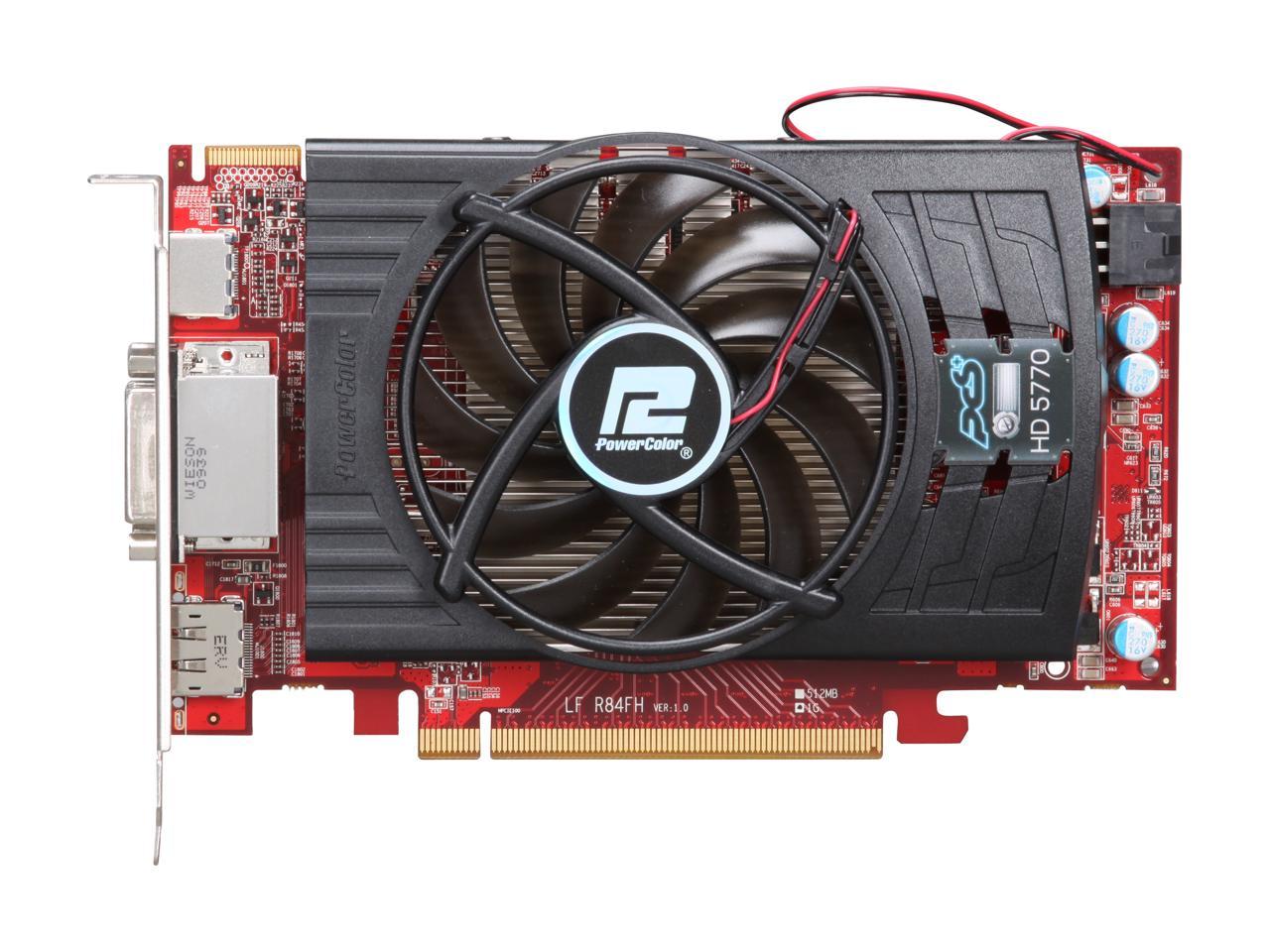 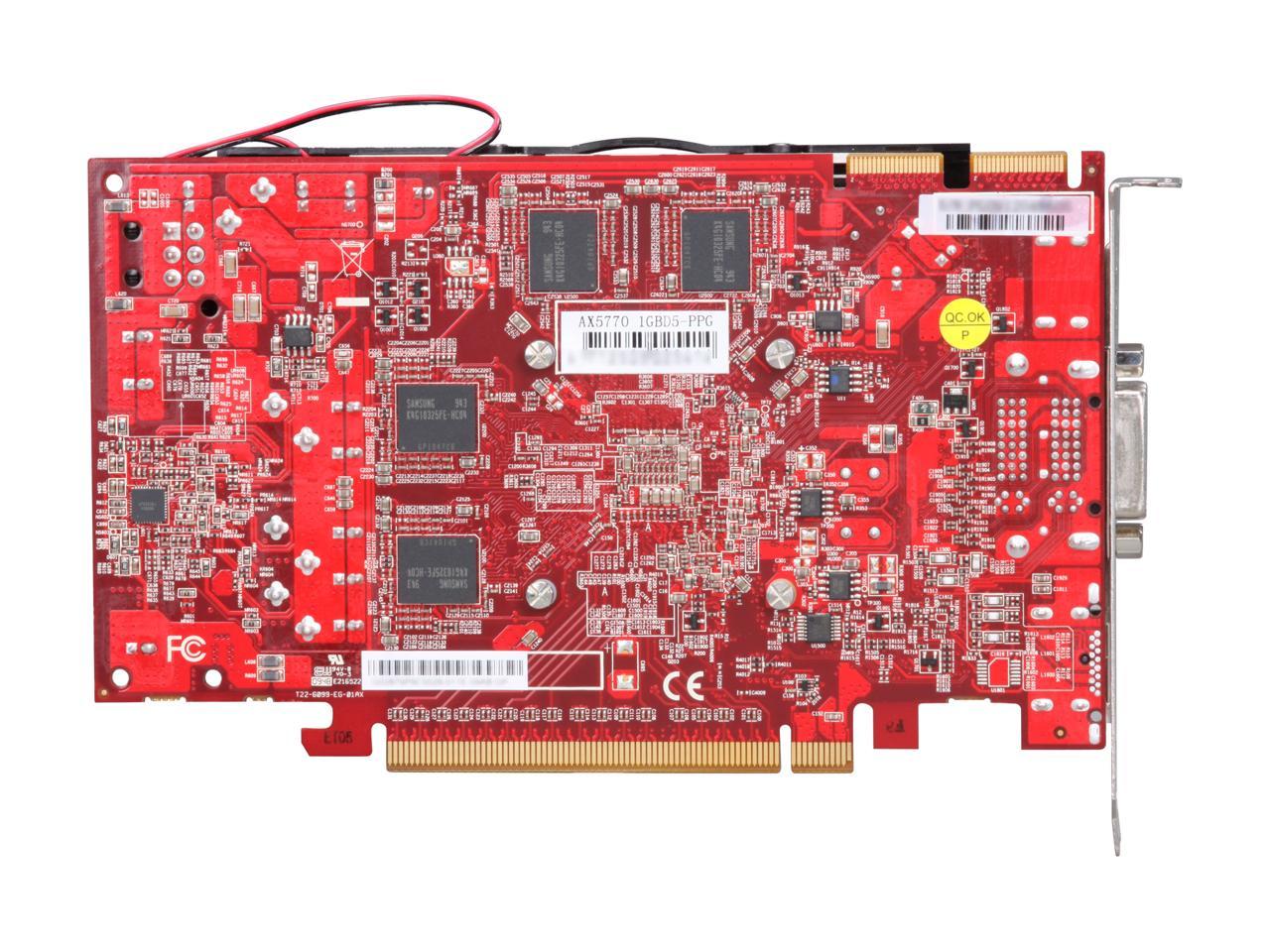 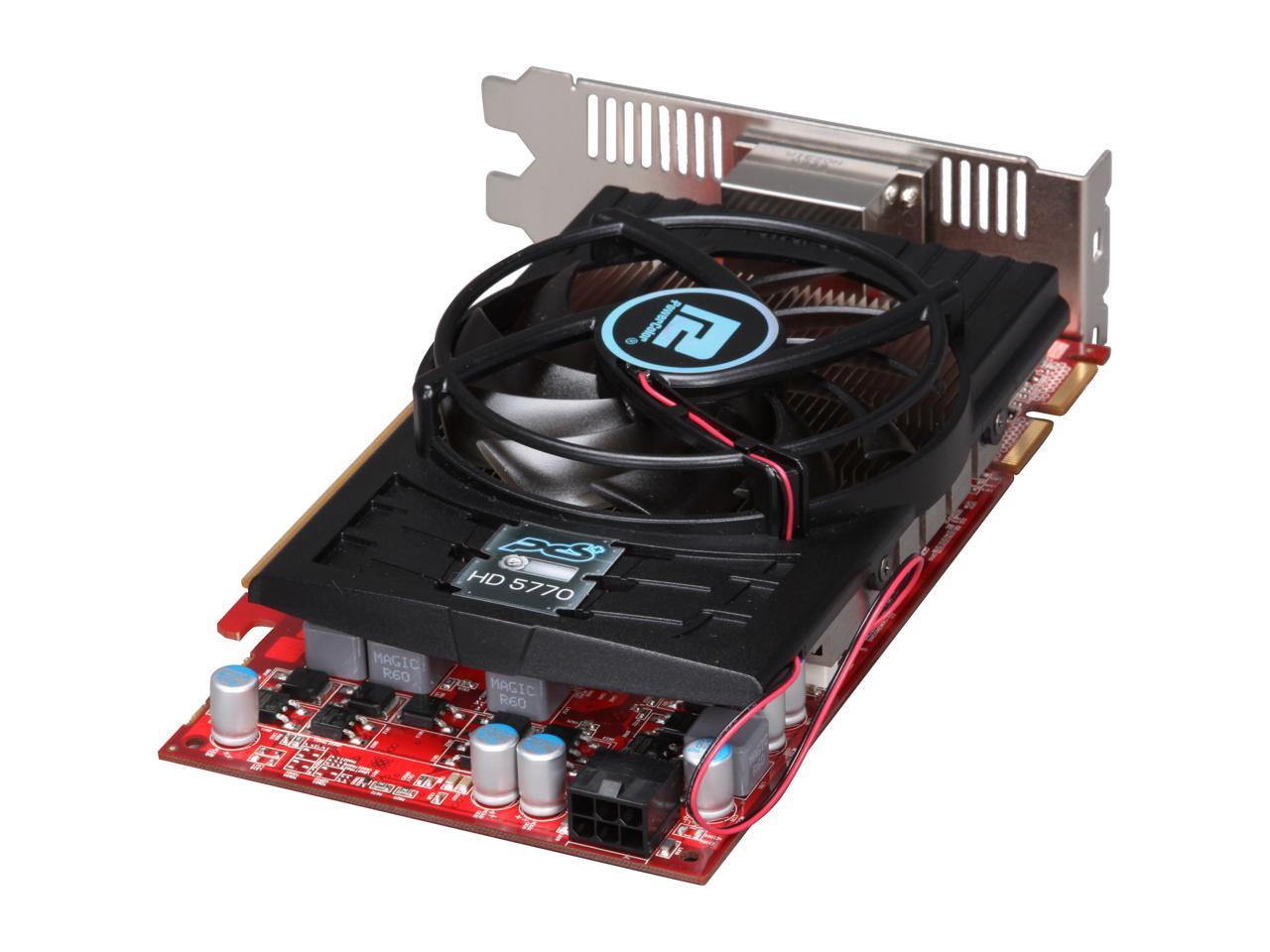 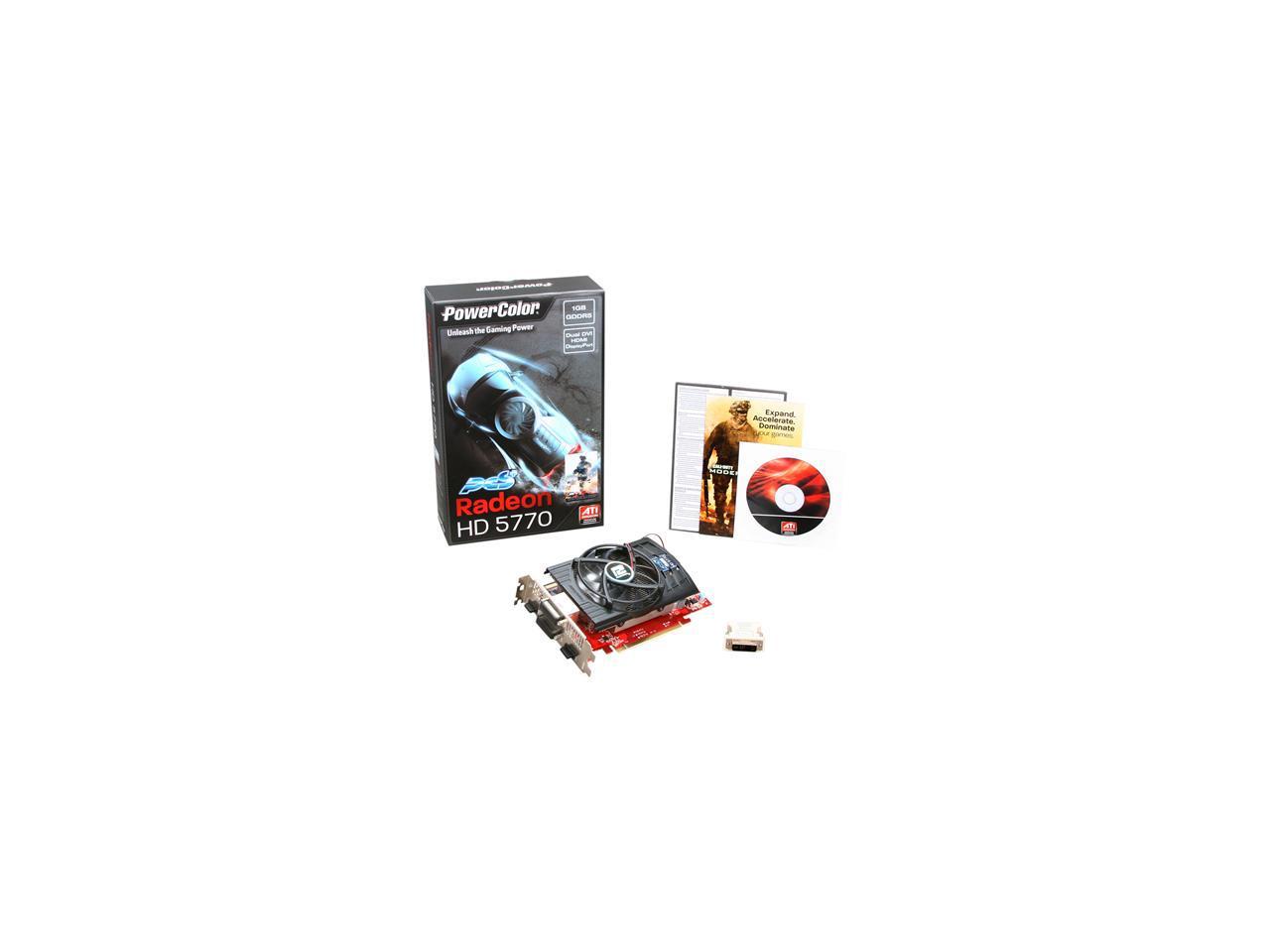 (116) Write a Review
OUT OF STOCK.
Specs
Reviews

Pros: Uses the shorter pcb of the 5750, but with all the performance and memmorize size of the full size 5770. high build quality and solid attachment of the cooler to the chip. Like other 5770s, uses only 1 pci-e connector. Peak temperatures with a standard 120 intake fan on CM690 was low 50 degrees C. Big fan with plenty of airflow for GDDR ram and long aluminum fins on cooler. Air shroud seems well thought out with alot of flow across the capacitors.

Cons: cooler uses traditional aluninum fins with no heatpipe. seems like a wasted oppurtunity to allow the card to run cooler/quieter at a moderate price premium.

Overall Review: Despite its simple cooler design, the card runs stably and reliably through all its pacings. It runs old aps as well as newer apps such as the video killing Crysis with nominal 40-50 frame rates at 1080p (1920x1080). the 128 bit bus on the GDDR 5 is probably a hinderance with anyone running larger screens. But, pragmatically, a solid mid-level card in a mid-level gaming system. If this is an issue, then i recommend going for the 5850. Otherwise, it is a splendid card, which runs quieter than my "egg cooler" 5770, smaller form factor, with all the features. The dust covers for the display ports and the crossfire connectors was a nice touch, although unnecessary. The fan runs at 40% for the same cooling performance as the egg cooler at 30%, but the noise level is definately quieter. One thing of note, the DVI ports are more center line than the eccentric placement on the larger 5770. This creates no problems, but can creatre clearance issues with aftermarket coolers down the roa

Pros: Excellent performance for a low price card. Earned a 7.4 Graphics under Windows 7 64bit and a 18759 3Dmark points. Overclocked the GPU to 950Mhz and the Memory Clock to 1300Mhz with a constant core temp of 48c. Super stable and would actually OC higher. Large heat sink and very quiet. The included drivers work well and are stable. The ATI has newer drivers that also work well and are recommended. Another solid performer and excellent value from Powercolor. Please read note below.

Cons: 128 bit bus, but what whould you expect for the price. Occupies a single slot but requires double backplane, needed for the 2 DVI, 1 HDMI and DP connector. Something to consider if your needing all your MB slots.

Overall Review: PLEASE READ THIS!!! If you buy this card place a plastic insulator between the fan connector and heat sync. There is absolutely no clearance and when the heat sync gets hot it may melt the insulation resulting in a dead short on the fan power leads.

Pros: - Great price, I got it for $135 after rebate on the day of the 24hrs sale thanks Newegg. - No problem with driver on Win7 64bits (downloaded from AMD). - The length of the card is not as long as others. - Runs quiet. - Free Dirt2 game. - Solid build quality.

Cons: Like one of the previous reviewer had pointed out, the fan connector is basically touching the heat sink. I don't know if this will be a problem in a long run. I also don't know how to fit a plastic insulator in between with so little space.

Overall Review: Don't expect to outperform the 4890 but should be comparable to the 4870 in most. For this price, I am very happy with my decision of buying this card.

Cons: Worked fine for the first two weeks, then randomly driver crash while listening to MP3s. Problem continued to get worse over the last week. A quick Google searched turned up lots of problems with windows7 64bit and ATI driver crashed and restarted error. This happens on all games.

Overall Review: I could not find a user forum on Powercolor's website.

Overall Review: Just as a reminder, to those who buy this card. Leave your CCC Settings to DEFAULT, and allow your games to run their own settings you select. If you have conflicting settings, then every card, Both ATI and NVidia will not run properly, and have poor performance. Just wanted to remind you all that. I fiddled with the settings enough to observe this occurrence. So leave CCC alone and let the games do their MAXED settings and there will be no conflicts between the two settings of CCC and the Game itself. A Seriously Good Card! Buy two for the price of one Nvidia, and get WAY more performance.

Pros: Was a little hesitant on this card, because it uses the 5750 PCB and I prefer the cowel on the referance 5770. But it's pre-overclocked and comes with Dirt 2 and the cooler on it is really nice. The Heatsink has a copper base and the fins are nice and skinny. The overclock actually has this perform very close to the 4890 and beats out a GTX260 in most games. The price is amazing, considering this is only a little more than 5750's and a LOT less than the slower GTX260. Overall a great card worth of any gaming machine.

Cons: The card is a bit "thick" it does seem to spill over into 2 slots(for comparison my Sapphire 5850 only eats 1 slot) under it making it very difficult to impossible to crossfire on certain boards. Runs a bit warmer then the cowl based 5770's and 58xx's, likely due to the card not really blowing the air out the back and pouring it into the case. If you have a window in your case, it's not the most impressive looking card, but the performance more than makes up for it.

Overall Review: Running this on my Media PC and it works together wonderfully with my Unlocked Sempron 140 (dual-core @3.8Ghz). Great card and ATI's latest drivers (3.2 and 3.3) it runs right up at 4890 GTX275 performance for much less than either of those cards. Two of these in Crossfire is a devastating force competitive with the 5870 at a lower price.

Pros: Really nice build quality, Comes with a game, attention to details(dust covers for ports), Fair price, Overclocked**, Stable drivers on the cd. DX11. I was not all that certain about the powercolor brand name prior to this but, this product made me feel alot more comfortable about the brand after I recieved it. It has a nice price-point and the oversize fan is very quiet. I expect better things as the drivers mature.

Overall Review: This was purely a Lateral upgrade from a visiontek 4850. There was only about a 50 point increse in 3dmark 2005 after the upgrade. The video was greatly improved in youtube which was a positive. I mean night and day. Most of the older games showed some signs of texture improvement(the water effects are fantastic all-around). I believe that I will see a legitimate jump in gaming performance as the drivers begin to mature. I would say that if you have a fairly powerful card, don't upgrade to this level- surpass it. If you have the DX11 bug or short on cash try this route.