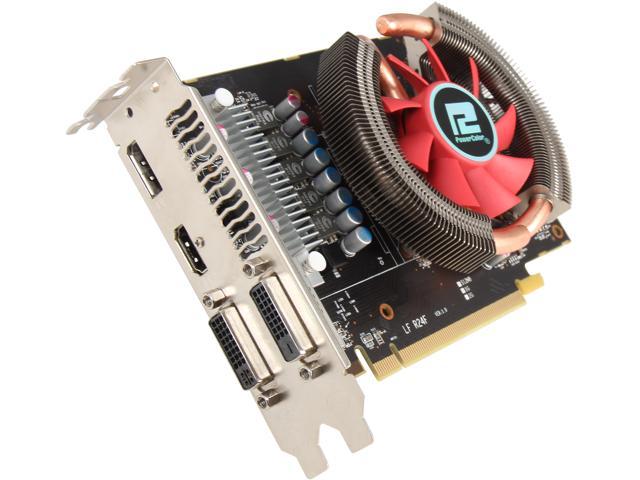 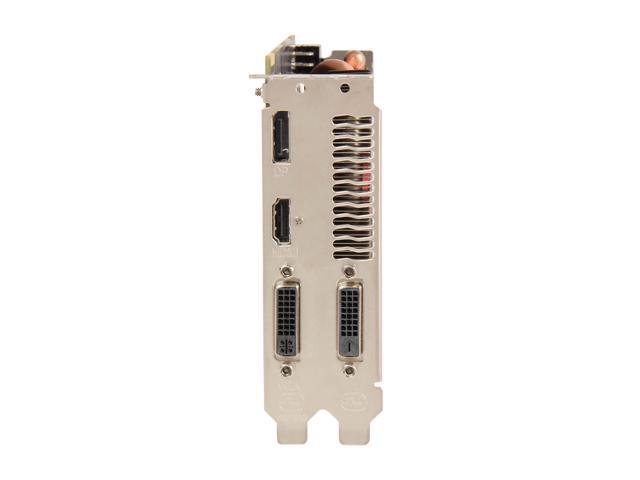 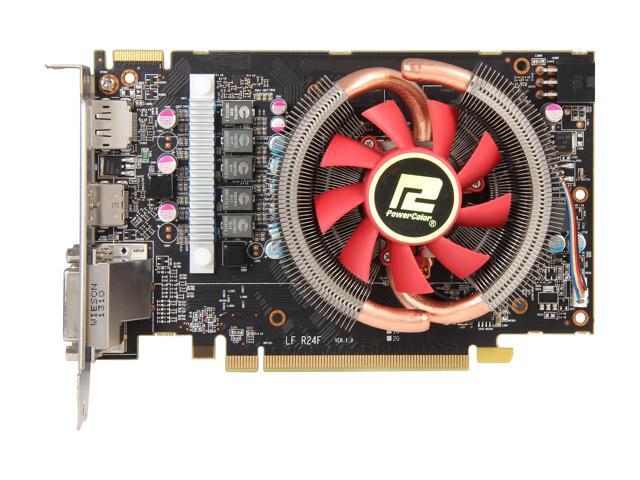 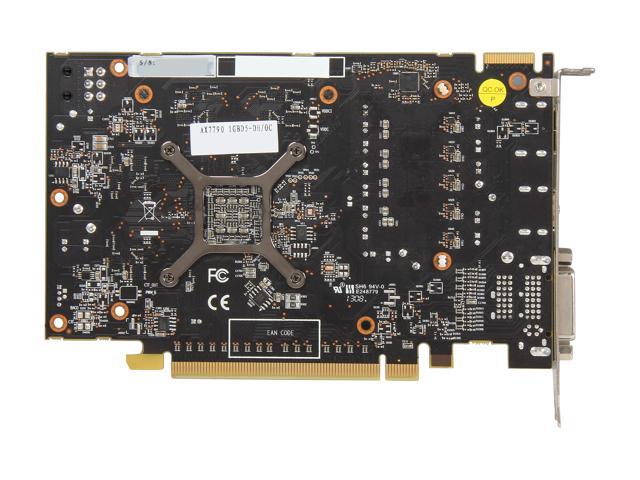 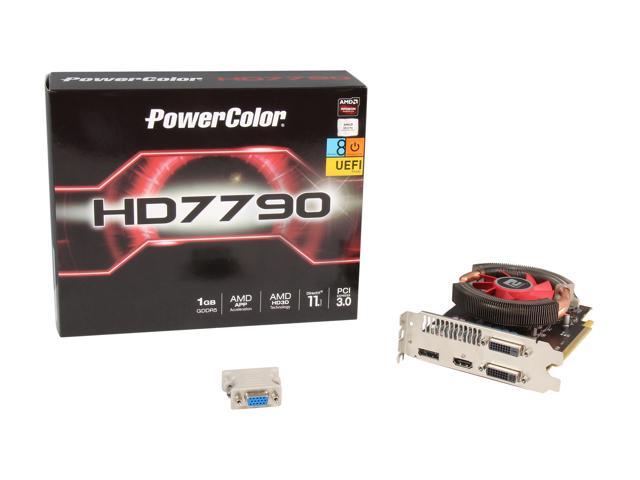 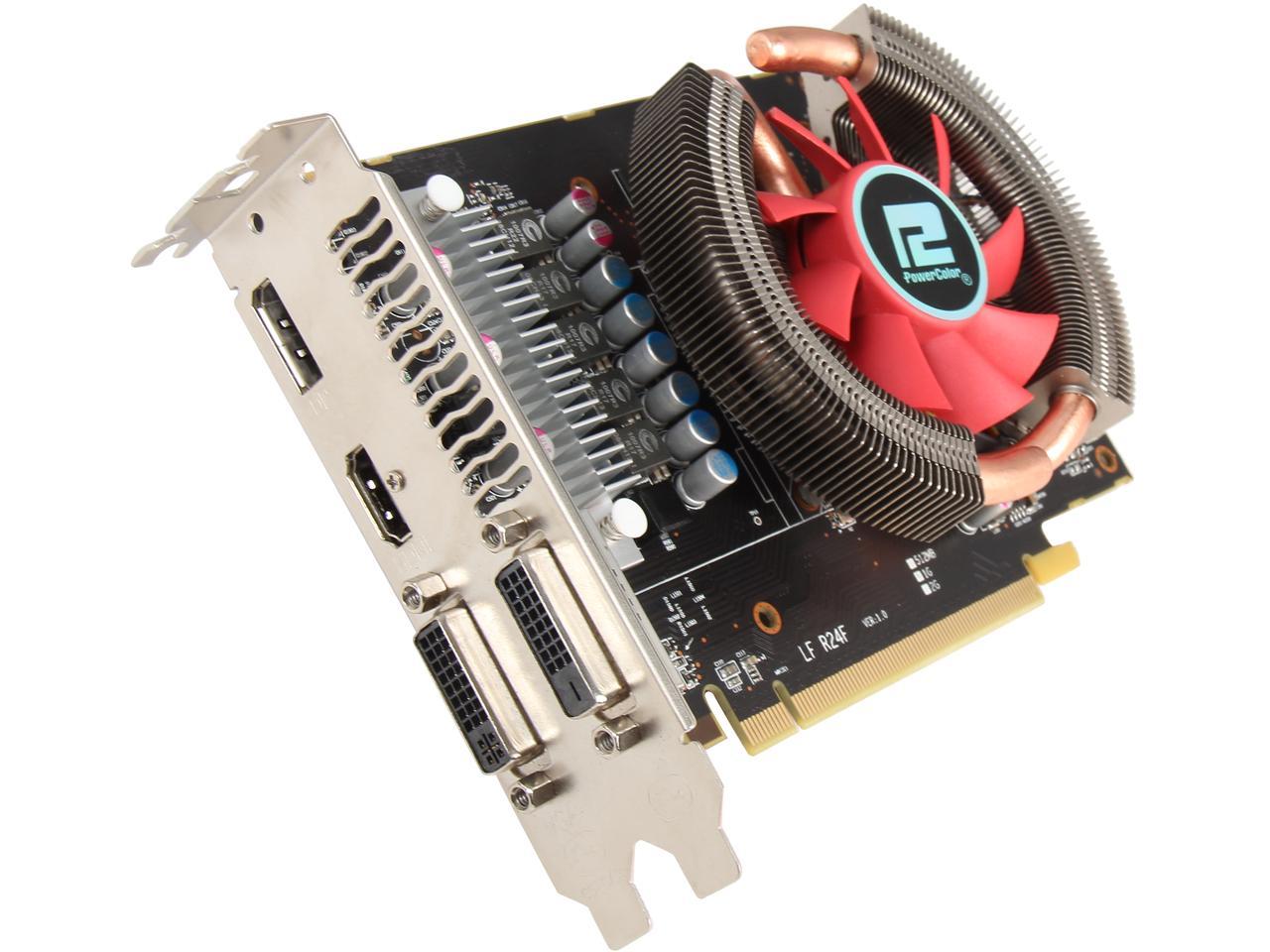 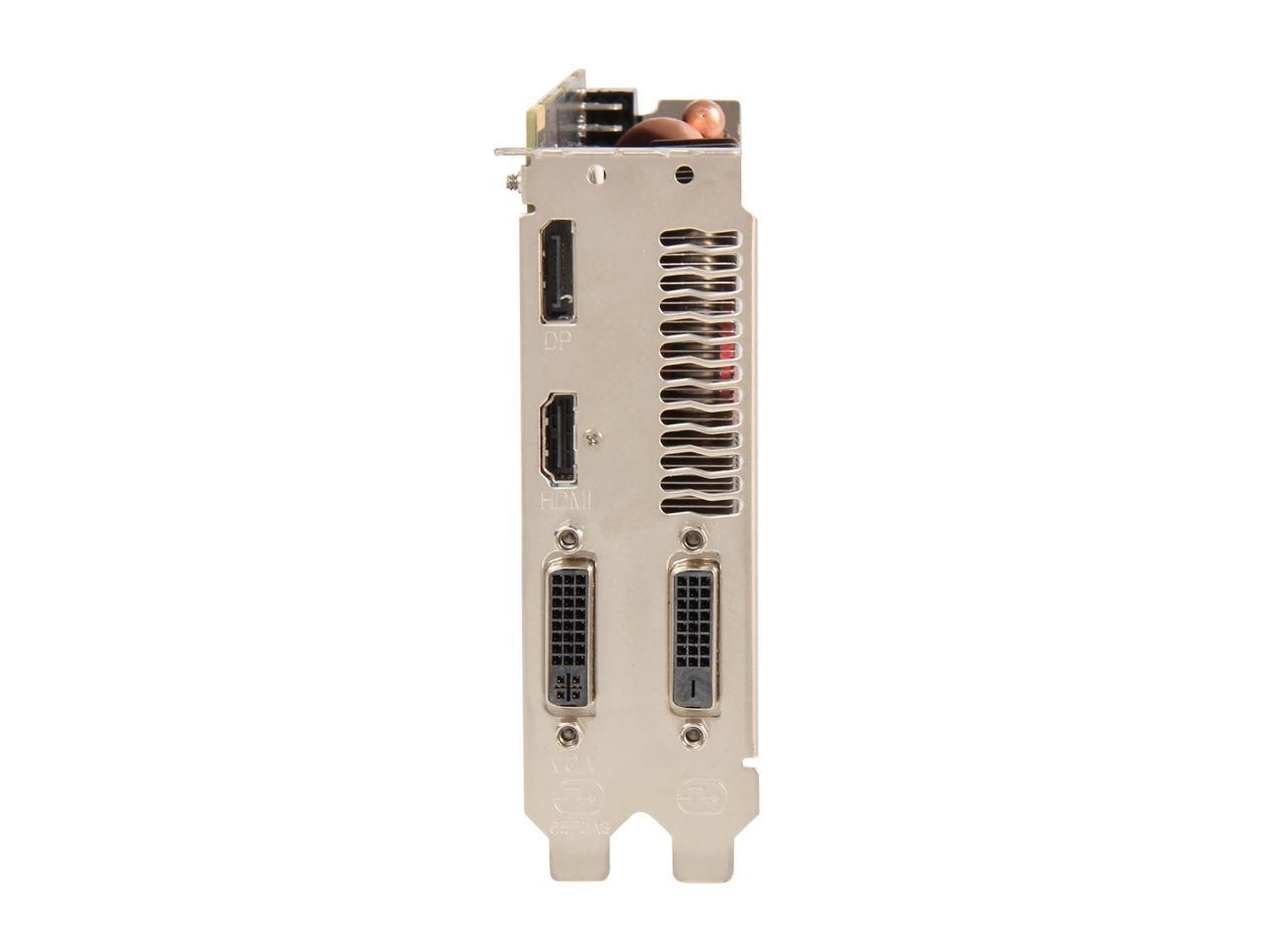 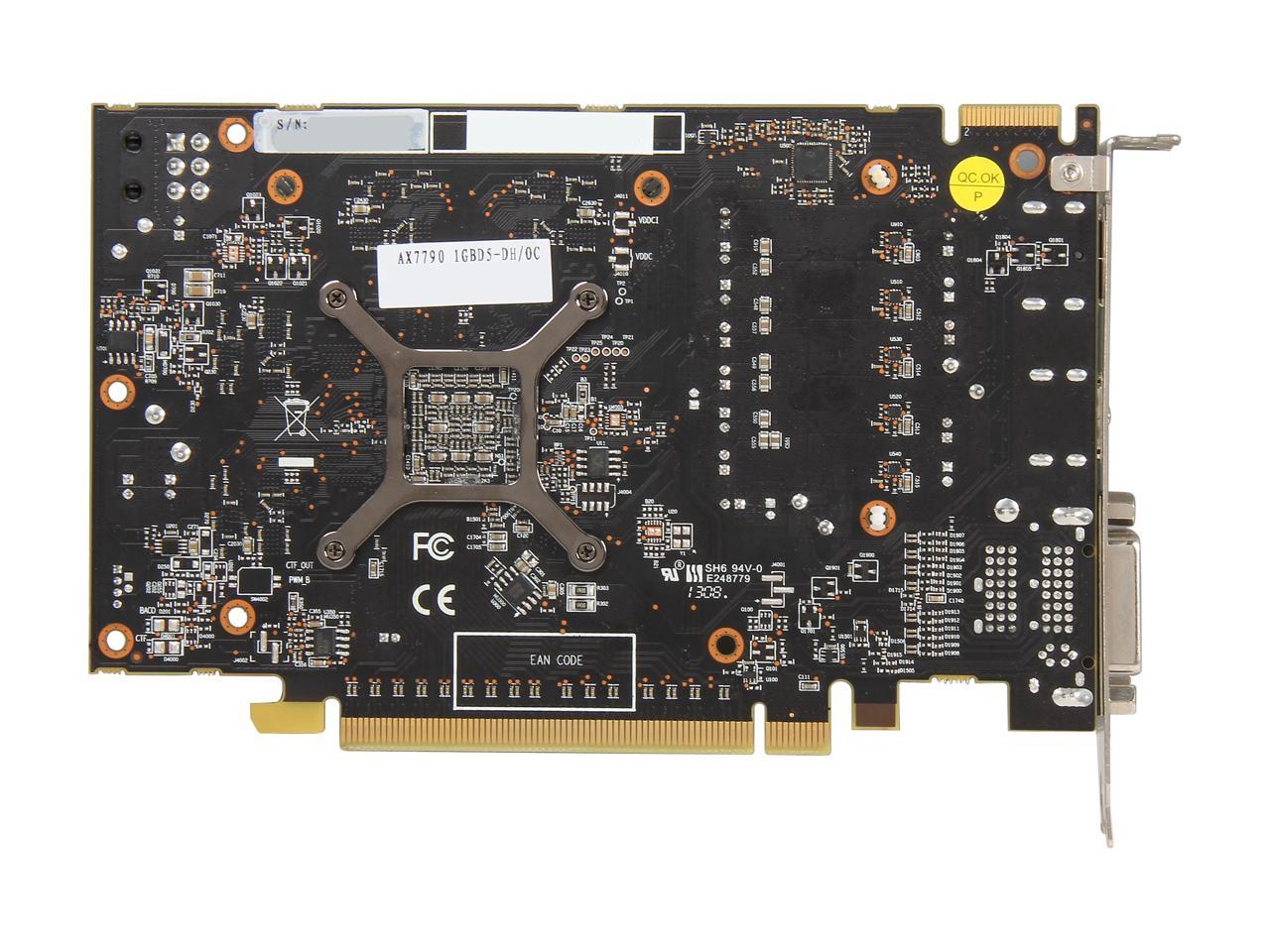 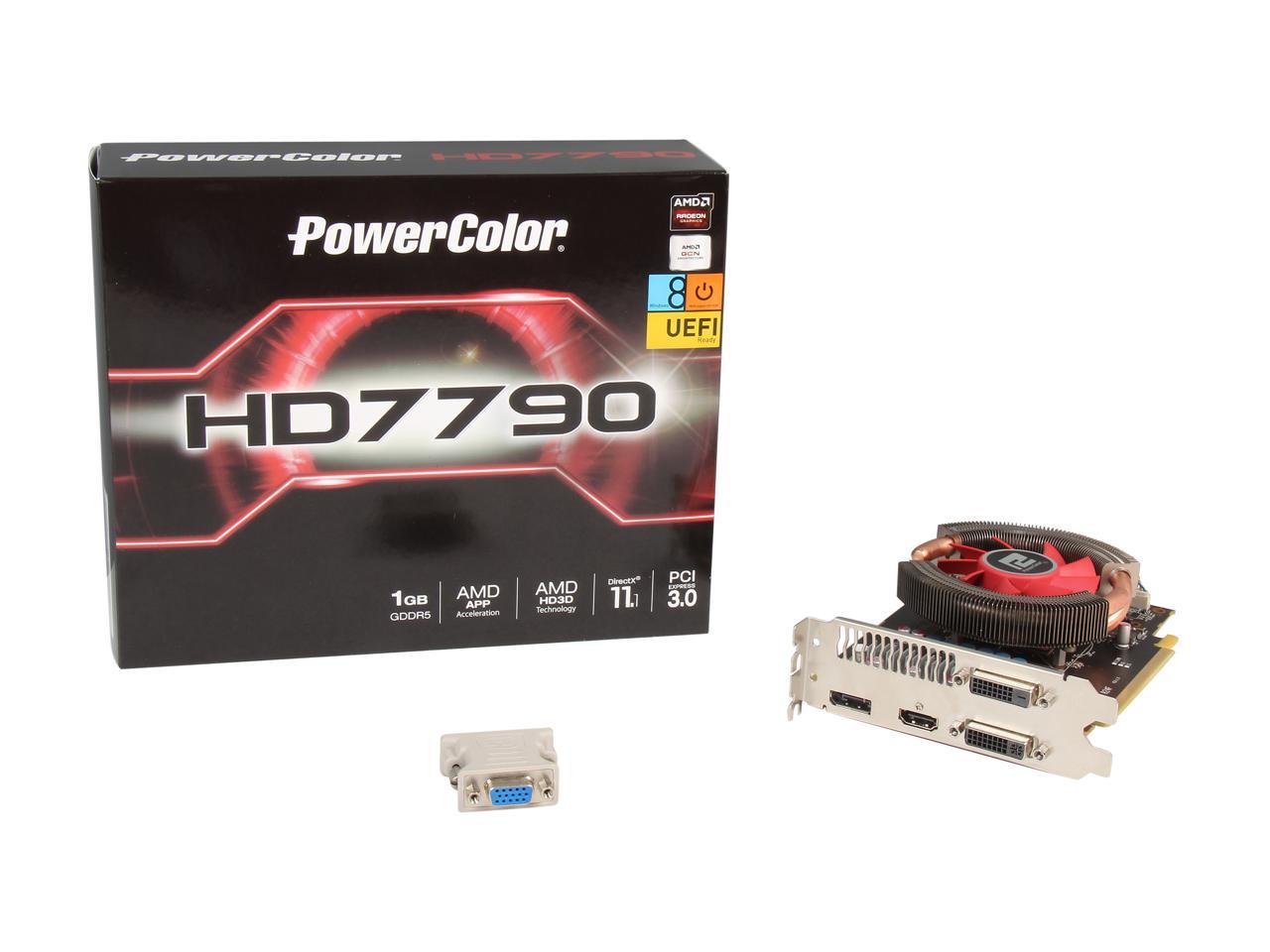 The Radeon HD 7790 is the latest member of AMD Radeon 7K series that hits the sweet spot of desktop graphics cards by combining competitive performance and great value. Based on highly acclaimed 28nm architecture and features a 1030MHz Boost Clock, the PowerColor AX7790 1GBD5-DH/OC delivers robust performance to render the latest DirectX 11.1 titles smoothly in mid to high settings in 1080p, and handle high definition multimedia content acceleration. A host of AMD technologies such as Eyefinity, AMD HD3D, AMD CrossFire and AMD PowerTune offers you more than one way to elevate your gaming experience.

Pros: Overclocked the memory to 1600MHz (1500 stock) and core to 1150MHz (1030 stock), nearly a 12% OC. Could probably go even higher but haven't tried yet. Registered over 3500 in 3DMark. Efficient cooling, never went above 67ºC even under extreme torture tests. Fan works well with MSI Afterburner auto-controlling the speed. It's probably the quietest fan I've heard at 100%. Played Grid 2, Sleeping Dogs, and Metro Last Light maxed out (except for Metro's SSAA) all with great framerates. This is a relatively new model so AMD offers great driver support for the newer games.

Overall Review: Got this for 115 after the rebate, plus two free games. Amazing card for that price, but not sure if it's worth it otherwise. This review is basically for the HD7790 1GB model overall, since as we all know the differering brands are basically the same, with the exception of card style, housing, factory OC, customer support and what-not. So I recommend grabbing the cheapest HD7790 you can find and run with it.

Pros: It looks good, it runs well, and it's affordable. Power color is a good company to use. I thought that it sounded really generic (sorry) when i thought about buying it, but i know that they don't play around. The 7790 is a great card if you're on a budget and don't want anything over 200. I can run any game at high settings without lagging. FPS is medium (around 30 - 40) at these settings as well.

Cons: The 1 GB version is good, but I would opt to a higher memory capacity.

Overall Review: I really wanted the 7970 but since I was on a budget, I got this instead. If you can spare another hundred on your graphics card, you should upgrade of crossfire these!

Pros: Able to run most games on high settings. What could I expect for $90 though? Want to get a second card for SLI for better performance, that should correct all issues.

Pros: Great value. Nice to get the GCN 1.1 newer tech and hopefully the trueaudio will be enabled by firmware at some point. Mantle may eventually provide some value. Tomb Raider was better than I expected and Bioshock Infinite looks promising.

Cons: Will be a little bummed if TrueAudio support s not added. Didn't care for FC3: Blood Dragon.

Overall Review: Upgrading from a 3850 (256MB) // This is a huge performance upgrade. I got a 1080p monitor when my old 1280x1024 went out and the (already old) Radeon 3850 just couldn't handle the few modern games I play (Alan Wake was the kicker). It served me well for 5 years. This handled the task with no issues whatsoever, and should be a carryover into a new system when I finally get a new board.

Pros: It lights up my monitors, or at least the left one.

Cons: Do NOT buy this product if you use Linux. There is simply no support for it right now. AMD is supposed to be open source friendly, but if you want a decent card for 3D stuff go with Nvidia and use the proprietary driver. Using the open source radeon driver this card was far, far worse then the 5 year old AMD HD 3200 onboard video that came with my motherboard. It was slow, funky, clunky and would only light up my left monitor in Debian testing. There is no currently available fglrx driver in the repository and by all accounts the one available on the AMD site won't work the version of X on Debian jessie. No big deal, I had an extra partiton, I installed the latest Ubuntu, 13.10 Saucy Salamander. Which took some doing because the live DVD would not boot to X, I just got a grey-black screen. So instead of booting to the live Kubuntu environment I had to install right away. Rebooting gave me the grey-black screen again instead of the display manager. No problem, I'm a big boy, I booted up to a recovery console, installed a few programs, and was able to get in to X, but again, radeon wouldn't work with 2 monitors. So I installed both of the FGLRX drivers in the repository, both of them were terrible, the system is far less responsive then the onboard video, compiz crashes the display manager, KDE can't do desktop effects, even XFCE can't handle compositing, but at least I have both monitors configured. I figure in a year Debian testing will have a newer kernel and fglrx in the repos, Ubuntu will have finally come to grips with radeon support and a proper FGLRX driver. Life in the big city if you are stupid enough to ignore all the warnings and buy a ATI/AMD video card for Linux instead of just going with Nvidia. Like everyone says, the hardware MAY be OK, but no one will ever know because the drivers are terrible. None of this would have been enough to make me write a review. But the PowerColor company got me to do so by having the most abusive rebate process I have personally ever seen. It just beggars description. Not only do you have to print their form, but you have to register on their site, which requires responding to not one but 2 emails which my yahoo account screened as spam, so I had to log in to their webmail to see them instead of using the IMAP interface on my email client, like I normally do. The registration process required you to enter product names, serial numbers (both printed on the card, BTW), even though they know these things perfectly well. But the kicker was they would not accept the Invoice from your email from Newegg, you had to log in to your account and dial down several layers to print out the identical Newegg invoice. This is simply busive, but at least it got me into my Newegg account so I could share my experience with you. I can't believe a company this sadistic will fulfill its rebates, but I won't have to worry about losing my PowerColor password because I will never buy from PowerColor again.

Pros: Not sure since it was DOA.

Cons: DOA. Had to return. Fortunately, Newegg has great customer support and issued a RMA with no hassels.

Pros: I'm enjoying the graphics card so far. I haven't really got a chance to put it to the test though. This is my first ever AMD graphics card I usually only get Nvidia. I will be back to write a real review after I have tested this thing out a bit more.

Overall Review: I was told i would get Farcry 3 with this but only received tomb raider and bioshock in my package. I'm sorta disapointed and i could only hope that newegg could correct this and send my my other coupon =D. I've built 3 Pcs through newegg thus far and have never had any complaints or issues until now so I'm not too mad.

Pros: OK, lets start off with all the time this thing has consumed trying to figure it out. PCI 3.0 is supposed to be backwards compatible. Not always the case. This card will probably work with a BIOS update performed with another video card first. I have a feeling this will stand true for all Z68 chipset boards and probably others. So if you are building a new system and do not have a PCI 2.0 version card lying around do not buy this. After hours of frustration and troubleshooting, keep in mind I owned a computer business at one time and have built hundreds of machines, so you can imagine that I was pulling my hair out. Scoured the internet, Intel support etc., went through post code error which really lead nowhere until I did some research on legacy ROM options and found out their purpose. Pulled everything out of system except one stick of memory and the video card, of course mouse and keyboard hooked up. Would not even let me into the BIOS even in recovery mode!! My reasonable deduction that it was the video card, I did not want to spend any more time and energy so I figured what the heck, went to Best Buy and picked up a PCI x16 2.0 version video card, installed, walla, fixed. Go figure. After I get Windows installed and BIOS and stuff all updated, I will try and reinstall this card and follow up on this review and let you know how that went and maybe adjust my rating a little, still kind of ticks me off that they do not warn you this might not work on a 2.0 version motherboard without updating the BIOS. It is really hard to update the BIOS when you cannot even get there from here.

Cons: Not backwards compatible with PCI x16 2.0, the manufacturer could change this by adding the instruction set into the firmware for both.

Overall Review: Unless you are performing an upgrade to a system that is up and running with current BIOS version or are using a newer motherboard that is PCI x16 3.0 compliant stay away from this video card, you will not be a happy camper.