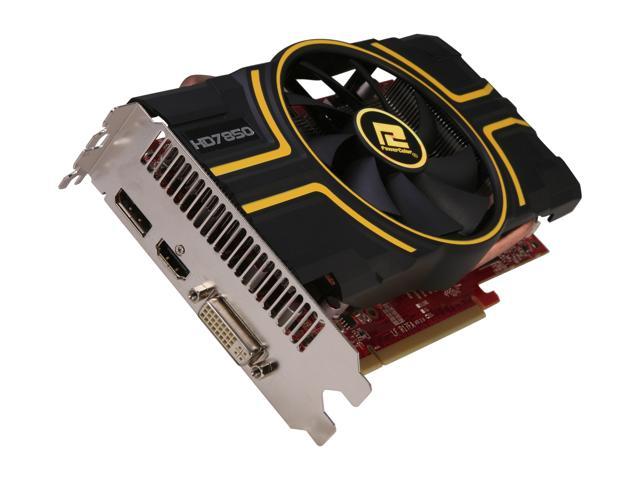 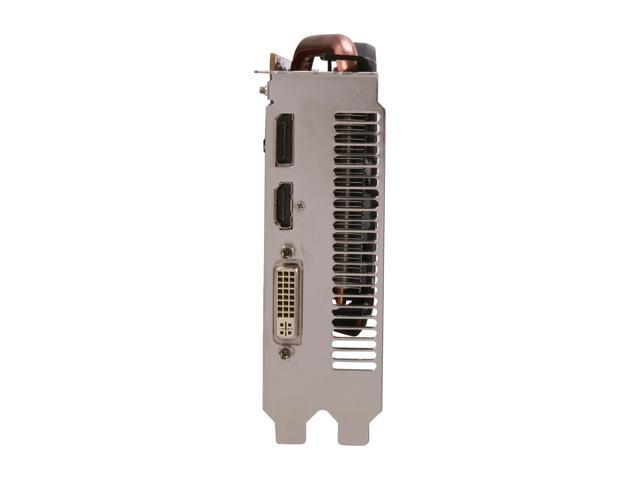 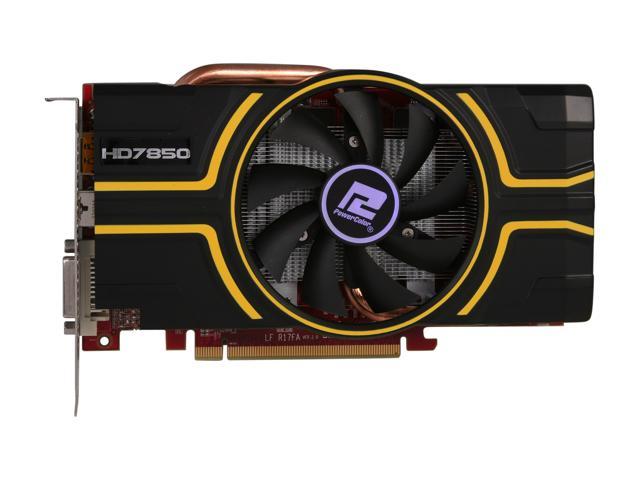 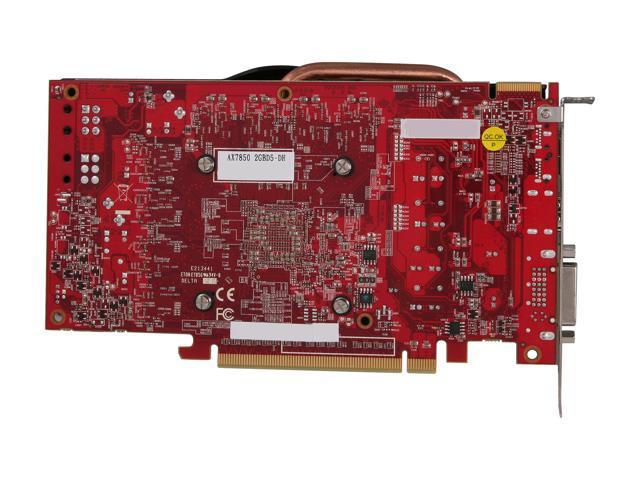 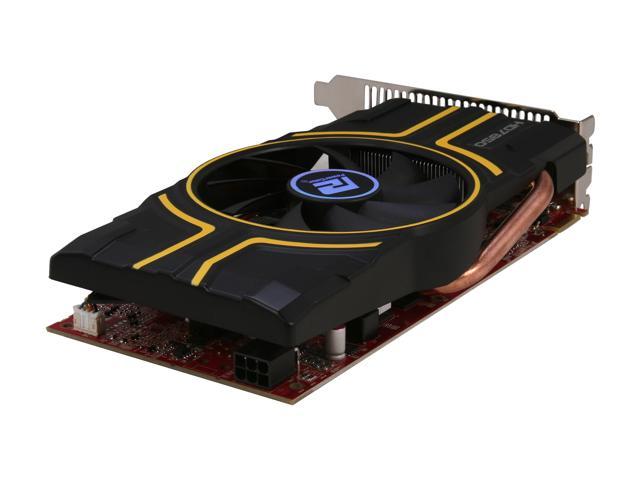 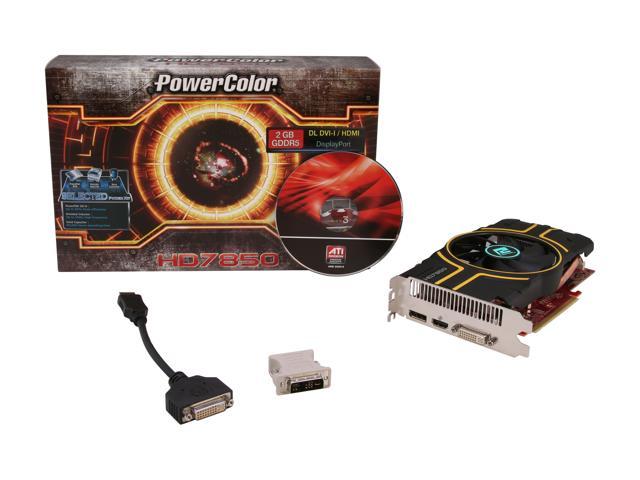 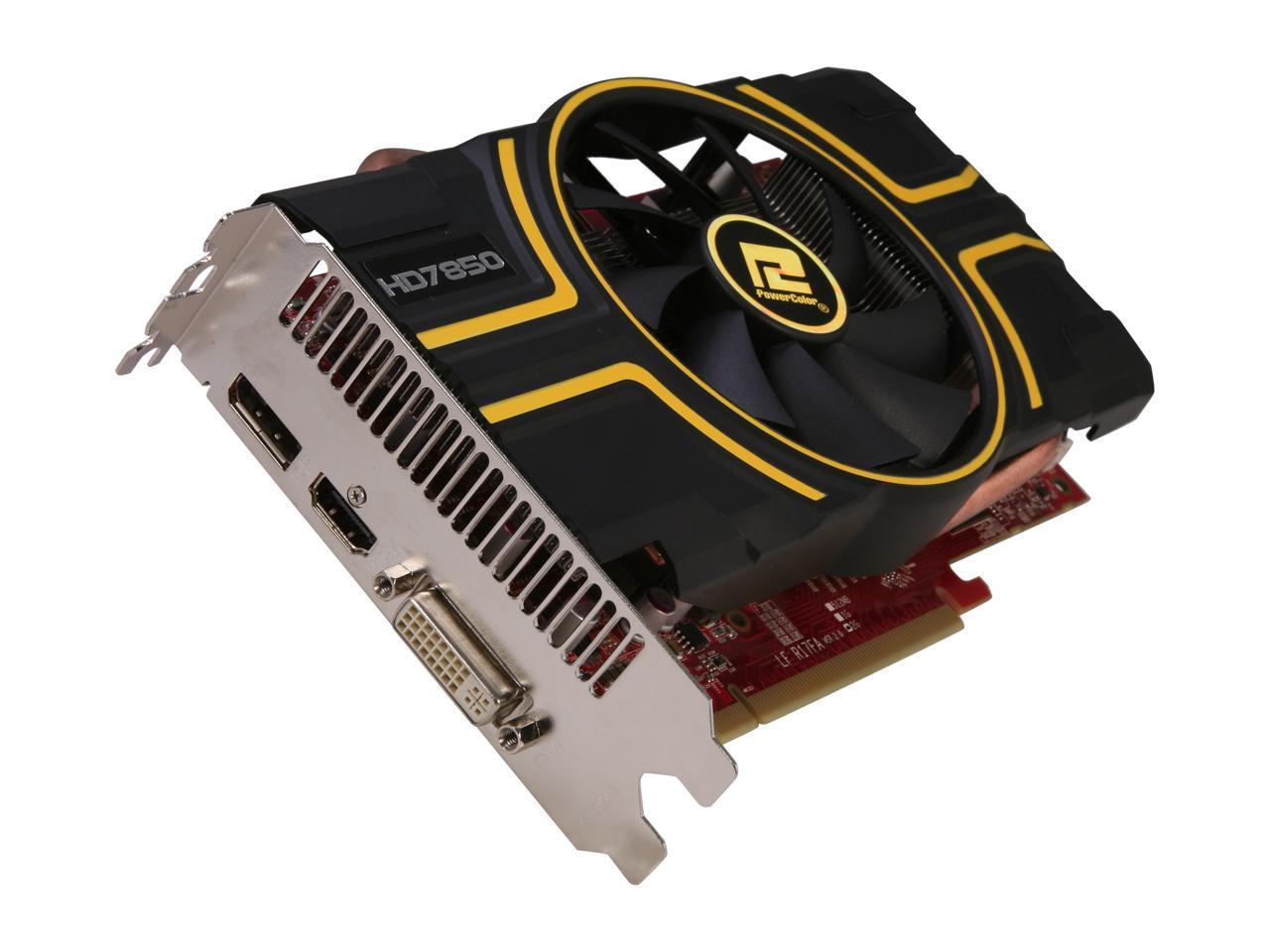 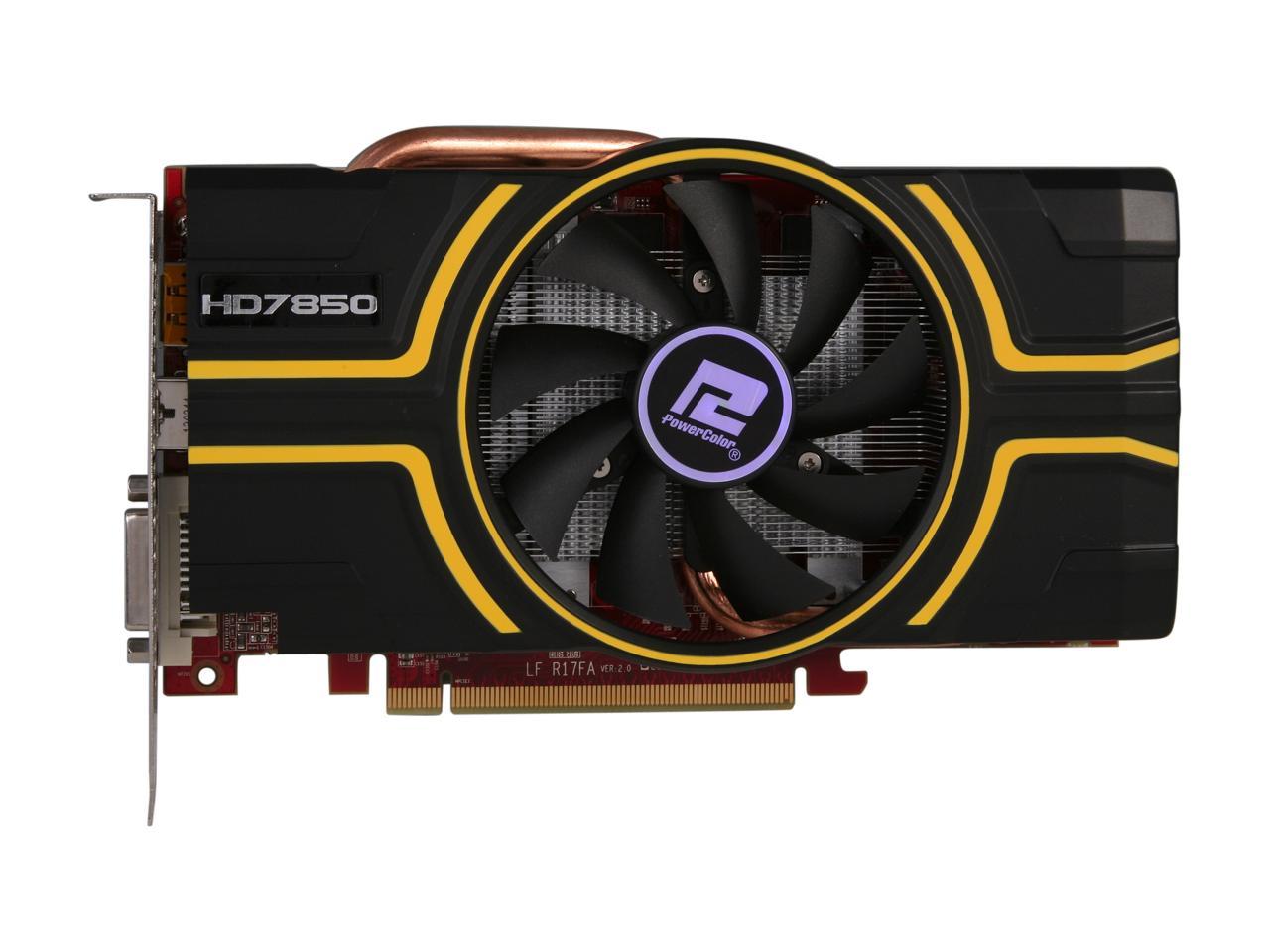 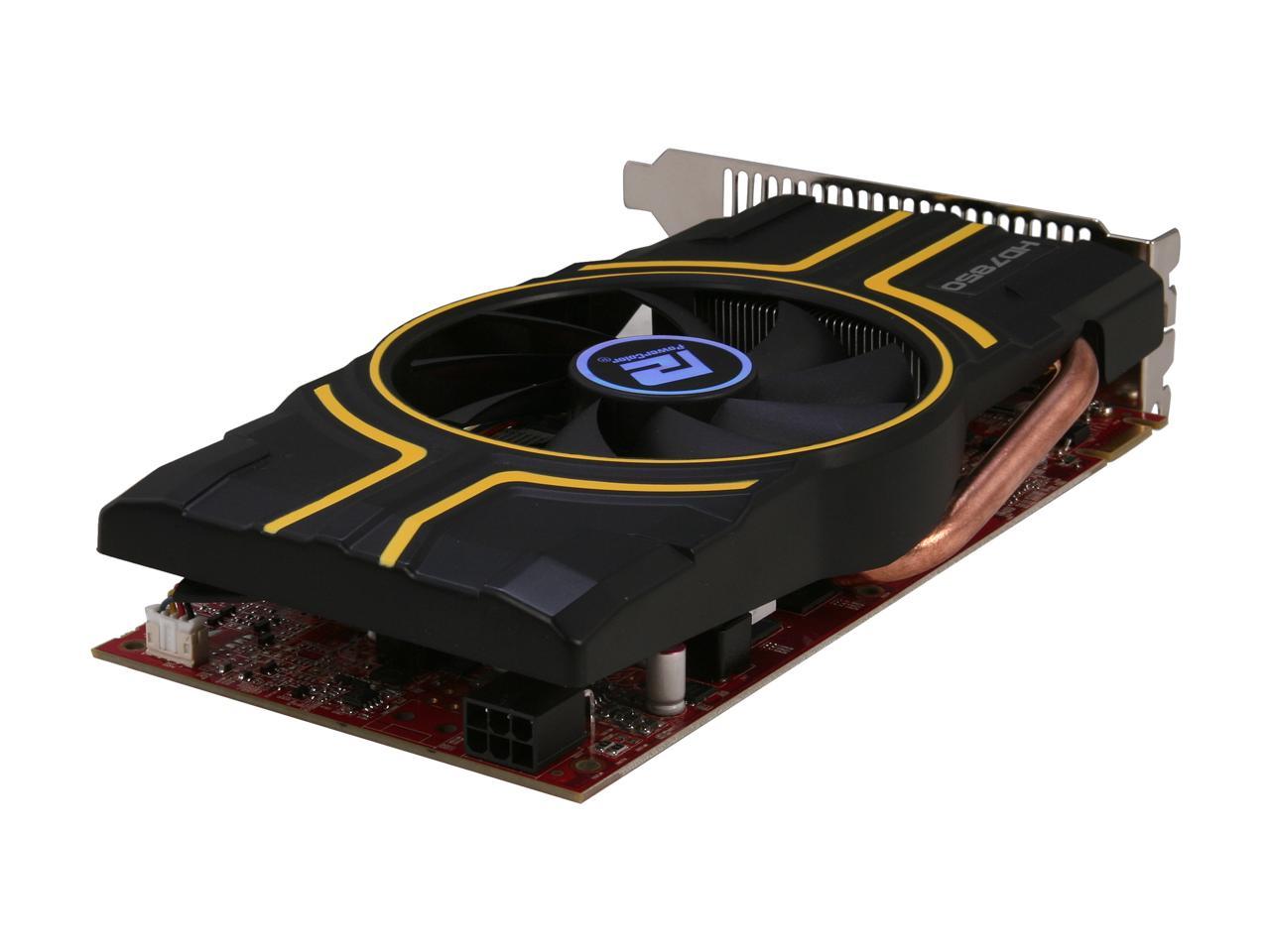 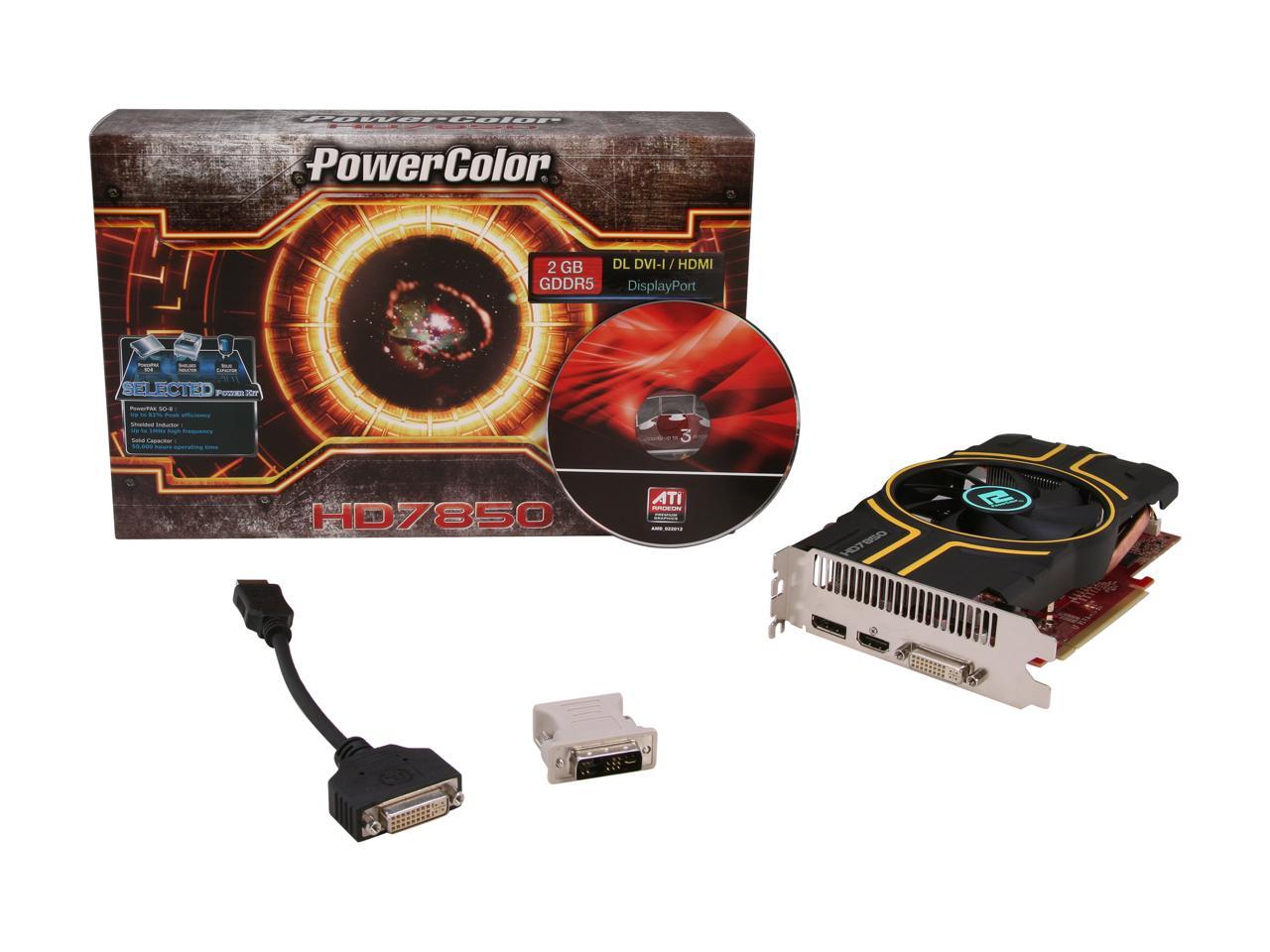 (85) Write a Review
OUT OF STOCK.
Overview
Specs
Reviews

The PowerColor’s own designed HD7850 graphics card is packed with selected power kit and efficient cooling system; with solid components onboard, easily enhancing the stability and thermal capacity, delivering truly rich and stunning HD performance with the support for vivid DirectX 11.1 gaming.

The PowerColor HD7850 has 860MHz core and 1200MHz memory; with advanced PCI Express 3.0 support, the latest series can boost up the power of GPU easily by doubling the bandwidth per land of previous generation.

Pros: Looks decent Plays games with ease. I have played the included games so far with it just a little. Bioshock at 1080P with highest settings almost always runs at 60 FPS. It sometimes drops during gameplay, but I've not seen it go below 30, and it seems smooth constantly. Tomb Raider, which I was not excited for really, looks absolutely stunning graphics wise and after just 30 minutes I wanted to play it! If I wasn't wanting to play Bioshock more, I would be. As for how the card performs, with all settings as high as they will go, again at 1080p, it runs but not well. You drop down in the teens a lot. It does not feel smooth. However, if you just turn the AA down a little to FXAA it will run between 30-40 FPS without any issue, and to me this is plenty playable. You could turn the settings down a little more and have the game look amazing and have 60 fps, but, this is the most graphically stunning game I have ever seen in my life and I am not turning it down! Overclocks very easy with AMD Overdrive.

Cons: Had an issue at first where it wanted to run at 100% usage no matter what, even just on the desktop. Something in my startup settings in msconfig was doing it, or a service. I turned off all of those I did not need and it works perfect now. Not an issue with the card, just a note encase anyone else has an issue to try this. Cooler does not cool the RAM just the CPU. I don't like this, but not a huge deal still works amazing.

Overall Review: I changed the thermal past on mine first thing to Zalman STG2. Not that the stock paste was bad, but I knew this stuff was better. My temps at max now are only 62, and thats after overclocking, and without changing the fan settings. Plenty cool for a GPU. I have it overclocked to 1000 core clock and memory at 1400. Having them maxed felt just a little unstable, but I didn't touch voltage at all either. I didn't need to. Performs well. In time I will buy a second and crossfire if I really feel I need more. For my results in the Pros section, I think my CPU may be limiting the card a little to be honest. I have a i3-3225 installed, great CPU, have it OC'd to 3.5 GHz and the voltage turned way down on it. Still performs well, but I think I am finally hitting its limit. An i5 or similar CPU will probably perform better.

Pros: Working well in a new build. Provides fluid gameplay while remaining quiet and cool in my system.

Cons: BEWARE: The bulge at the bottom of the plastic fan cowl dips a little too low for this card to be installed next to a legacy PCI slot (which are taller than PCIe slots) making it impossible to fully insert if your motherboard has this arrangement.

Overall Review: I have the card installed in a PCIe 2.0 x4 slot at the bottom of my motherboard instead of the PCIe 3.0 x16 slot due to the above issue. It's still running fine and I haven't noticed it to detract much from performance yet. If I get brave and want to take full advantage of my Ivy Bridge's PCIe 3.0 x16 lanes, I think I could safely dremel off a bit of the plastic and the fan would still clear the neighboring PCI slot.

Overall Review: Note that this is the V2 of the Powercolor Hd 7850. The V1 is also available on this site. The only difference is the cooler from what I can see. The V2 use the same cooler as their Psi (oc'ed) version, while the v1 is using the stock (and much cheaper) cooler from ATI. I would advice getting the V2, especially since they are on the same price range. My comp setting (new gaming build) I3570k 8gb ddr3 So far, 60 fps on ultra setting with AA/AF on Skyrim, GW2 (except Wvwvw) and Batman Arkham city. Crysis: Warhead (around 30-40 fps) and Battlefield 3 (40-50).

Overall Review: You can take this card to 1200MHz with Asus's OC tool. I'm currently using a 500w PSU, so, this is more than my PSU can handle atm. This is a great card, I love how the people who always seem to have problems with the lower priced products are the ones that claim their tech knowledge is 5... A fool doesn't realize he's a fool. Great card for the price. Don't let the naysayers fool you, if you're on a tight budget, this card will rock your new system. *If you really want the most bang for your buck on this one, get a 1600x900 monitor. At this resolution this card should be able to max anything you throw at it with great fps. Diablo 3 runs at 1080p steady 60fps. Planet Side 2 runs at 1080p medium settings at 45+ fps CPU - FX8320 oc'd to 4.4 Mobo - GB 970A-UD3 GPU - This oc'd to 1050MHz , Memory 1400MHz

Pros: I was unfamiliar with PowerColor before purchasing this card, but I am very impressed. PROS: Performance and Temperature - I've used it for gaming (makes Tomb Raider look amazing, especially with TressFX) and bitcoin/litecoin mining. Even while mining and overclocked to 925/1250, the card runs very cool (~67 C) with no special cooling. I have yet to see this thing hit 70 degrees, whereas my 4850 ran crazy hot (typically around 90-95 while gaming). Size and Power Requirements - The card is small for an HD 7850 and only requires one 6-pin connector. Although my PSU is Dell stock (375W), I have had no issues so far (my old HD4850, the one Dell put in there, used more watts than this card, so I figured I should be safe). Customer Service - The first card they sent me had a few issues with the DVI port (would only work if I used the VGA dongle and connected to my monitor with VGA, which I found to be unacceptable), so I contacted Newegg and they promptly sent me a replacement card. The new card works flawlessly. I've been very impressed with PowerColor and fairly impressed with Newegg and will purchase from them again. Free games - The only issue I've had so far is with AMD. When I went to redeem the games, they said that there would be a delay with Bioshock:Infinite. It's been over a week since I redeemed and I still have yet to receive my code. It's not that big of a deal though because I only have a few hours a week to play games anyways and Tomb Raider has been far more entertaining than I expected. It's worth noting that with TressFX and everything turned up all of the way, when the camera angle gets too close to her hair, it gets a little choppy trying to render the gazillion strands of hair and the physics associated with it. I'm guessing it takes a 7950 to keep the frame rate all the way up for that game.

Pros: can over clock nicely, im running it at 1000 and 1400 stable, it stays cool, max temp ive seen is 55c (my case has 3 case fans), it can run most new games maxed out, i play battlefield 3 and planetside 2 nearly maxed. Its crossfire ready (although crossfire cable is not included) If youre on a budget you cant get a better card than the 7850 2gb for $200 and under

Cons: ive never had so much trouble setting up the brightness and contrast to work with my disply before (47 in vizio) the default settings needed to be tweaked A LOT in my case, media playback (video) looks worse than on my old nvidia card. as i said above crossfire cable isnt included

Overall Review: if you know a lot about tweaking video/3d settings this is a perfect card as you can squeeze out all the card has, but if you want a much simpler setup straight out of the box get an nvidia

Pros: Wow. Setup was a breeze, the performance is great (Skyrim on ULTRA at 60+ fps), and the price is great. I love this card.

Cons: I was confused on set up at first, but then realized that I hadn't plugged in the six-pin PCI-E power connector to the end of the card. -Only a single DisplayPort connector.

Overall Review: This is really an incredible powerhouse. I could not be more pleased.

Cons: DOA fan spins but the monitor receives no signal. Bought this for Battlefield 4 but now looks like my weekend is ruined. Tested it on another computer and same thing, after reinstalling my old gpu back in it booted up fine and worked.

Overall Review: Tried to email jgaray@powercolor.com after seeing the manufacturer response on some of the other DOA reviews and it doesn't seem to be a valid email address. Not a good sign so far, not sure how much confidence I have in their Mail in Rebate anymore.