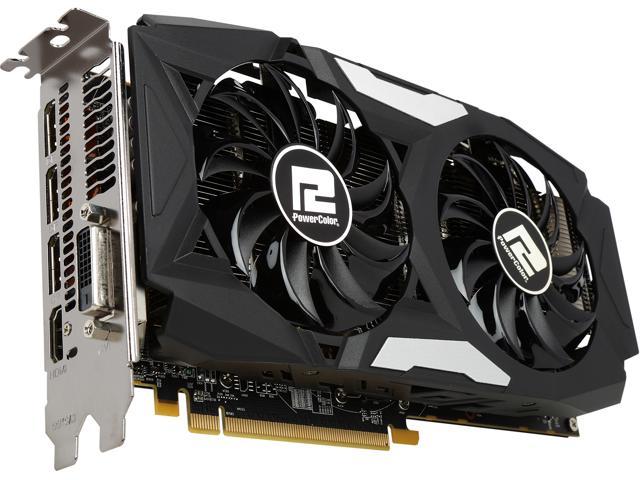 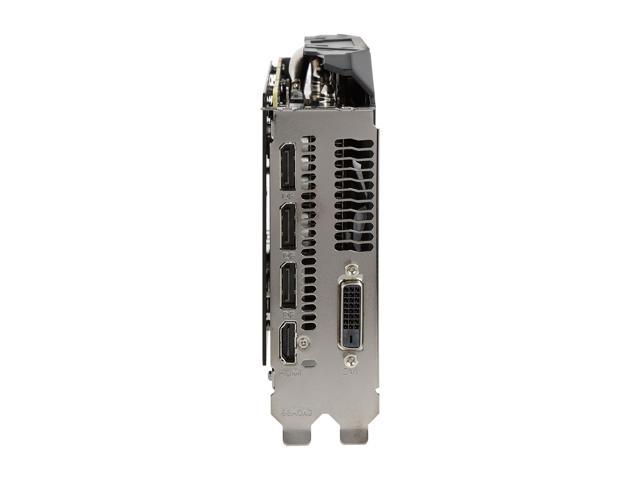 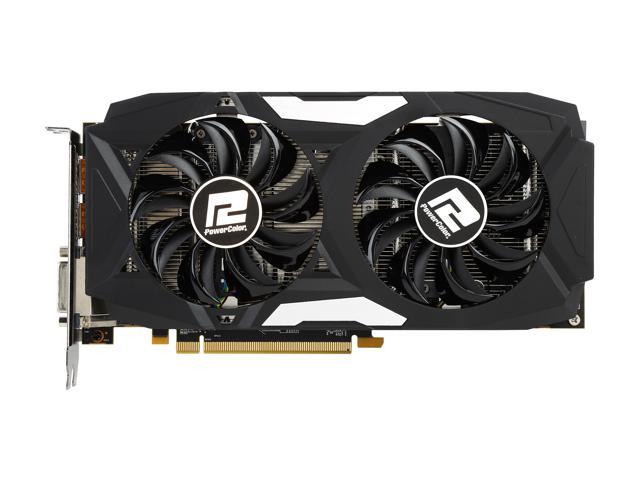 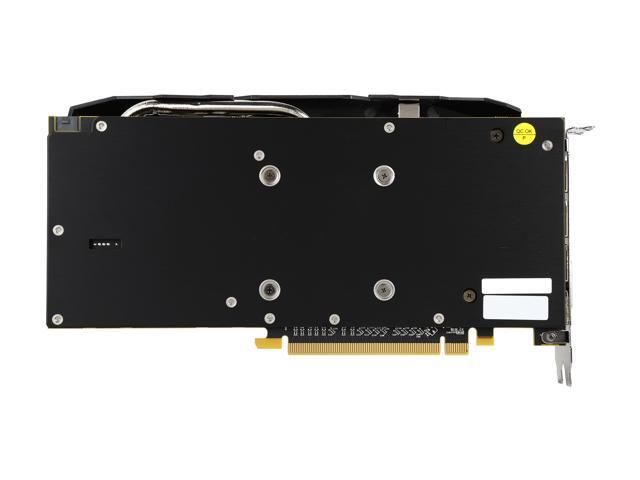 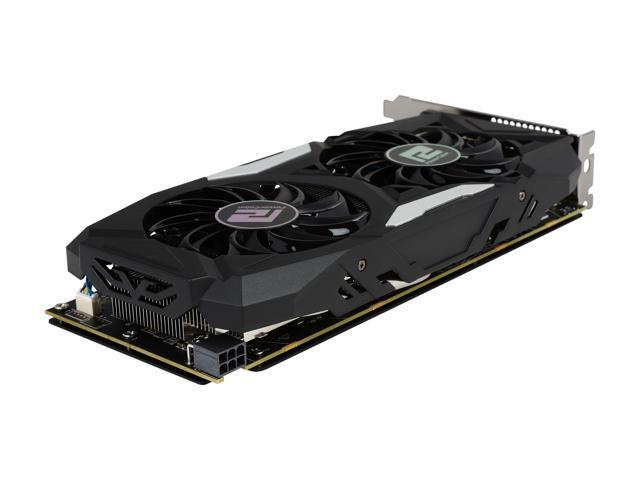 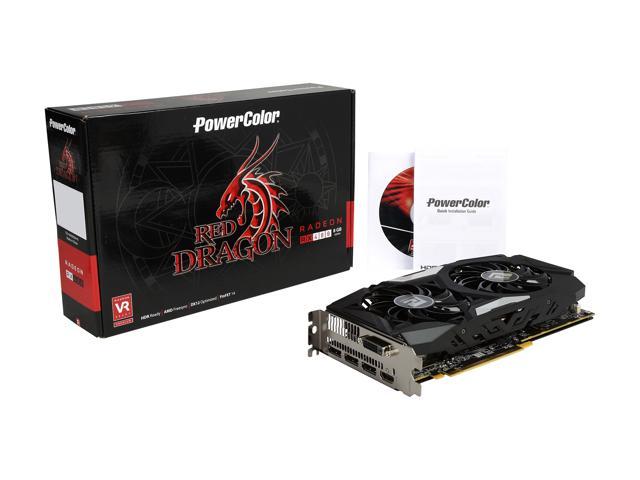 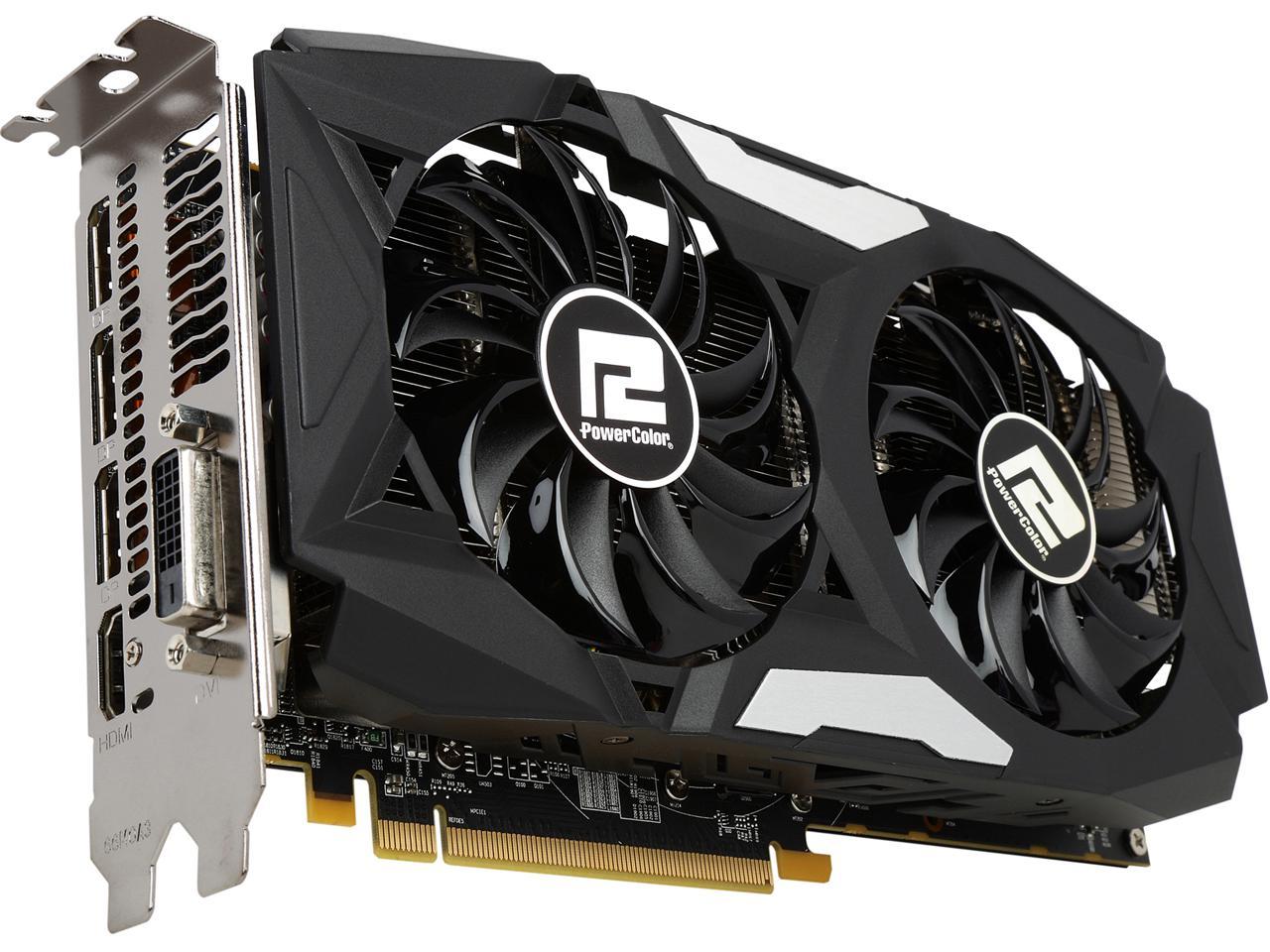 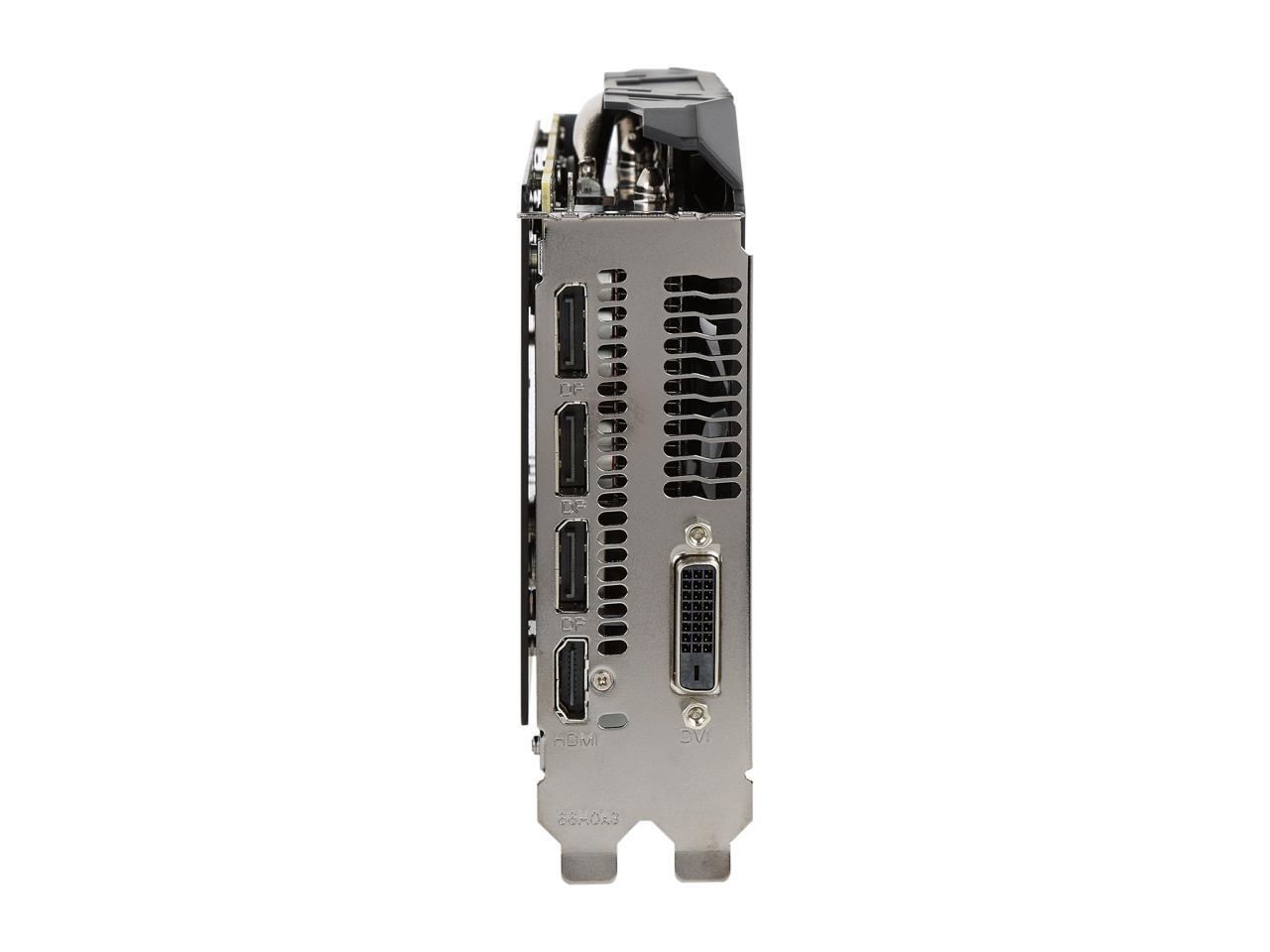 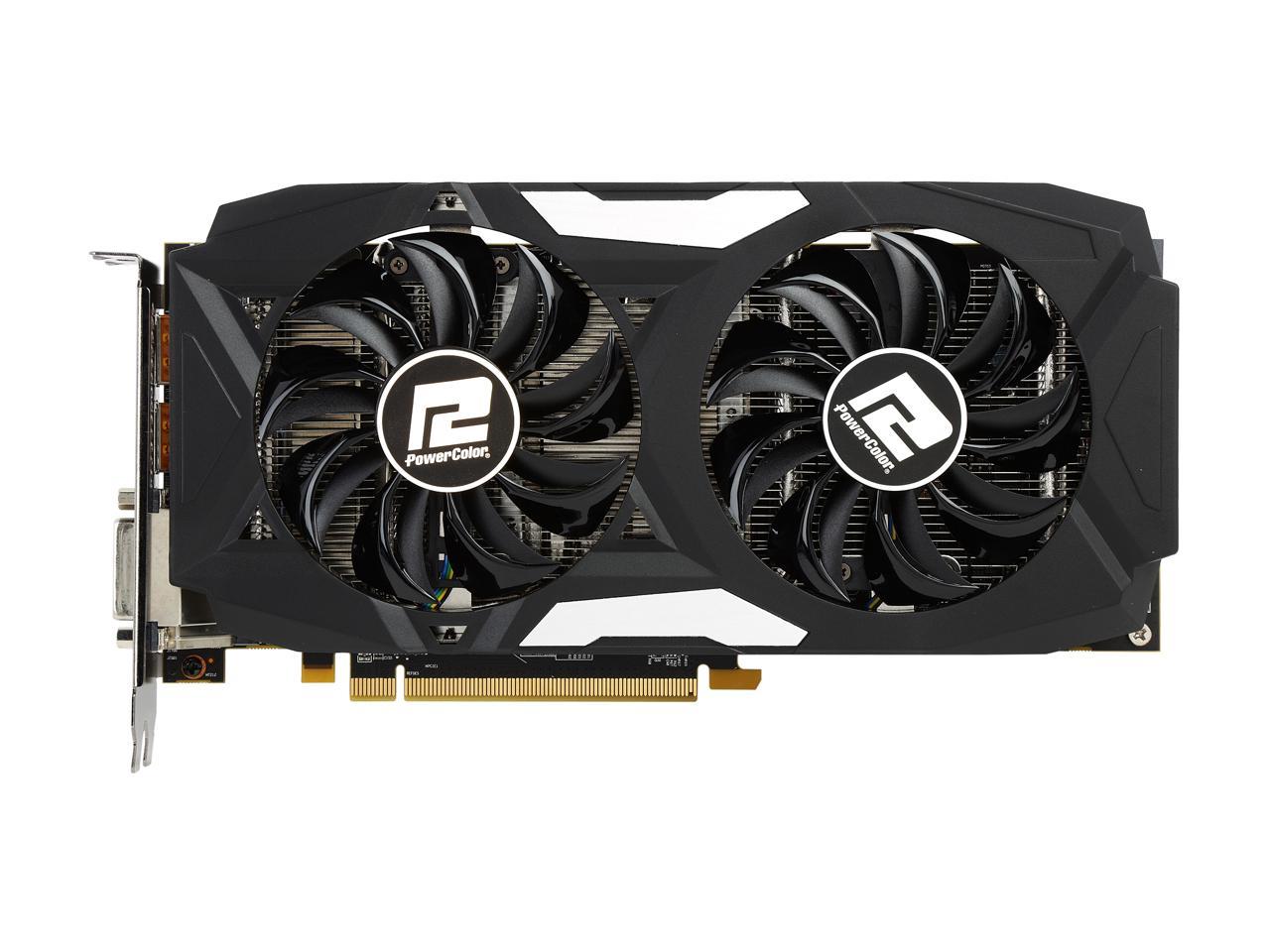 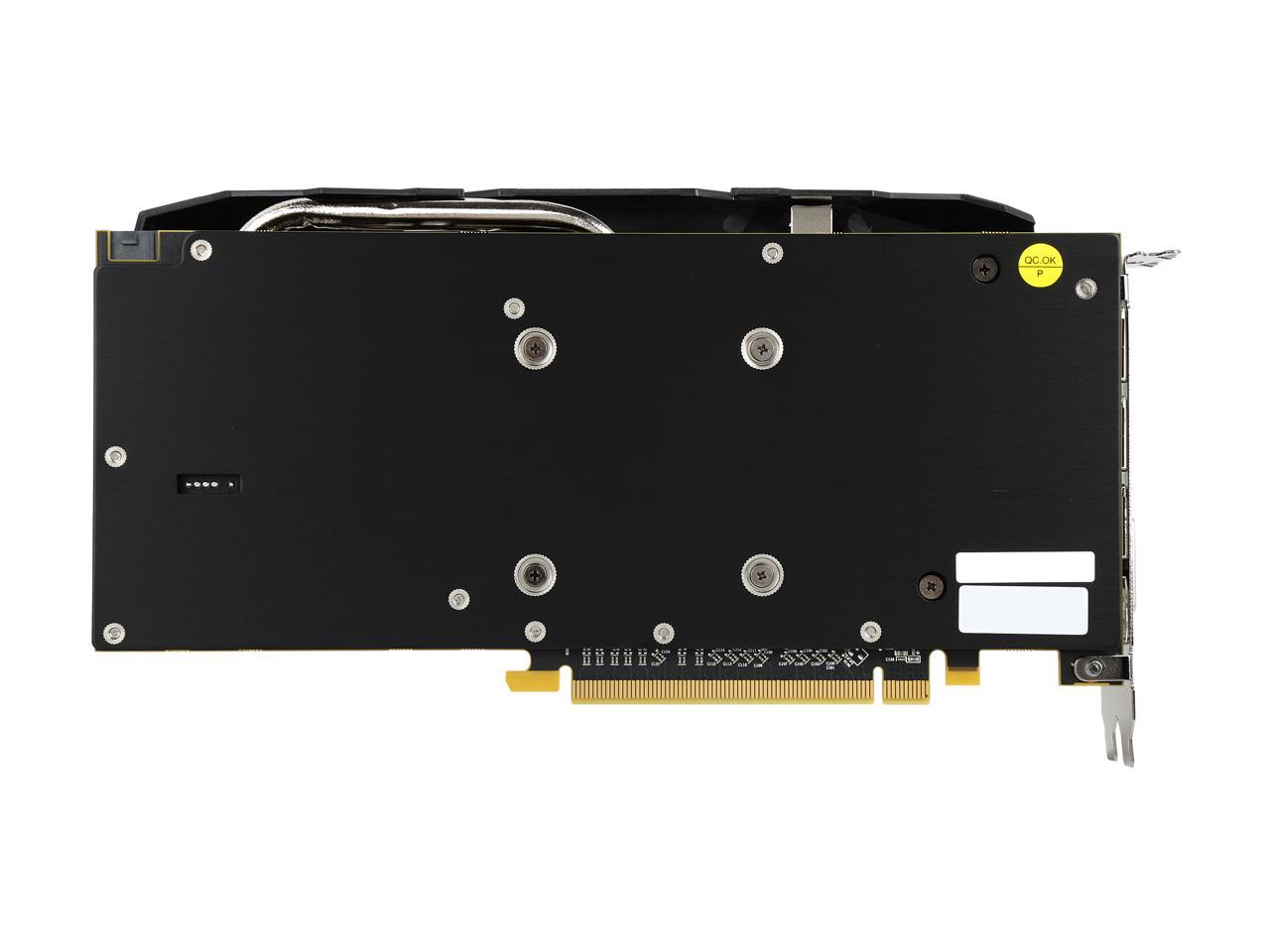 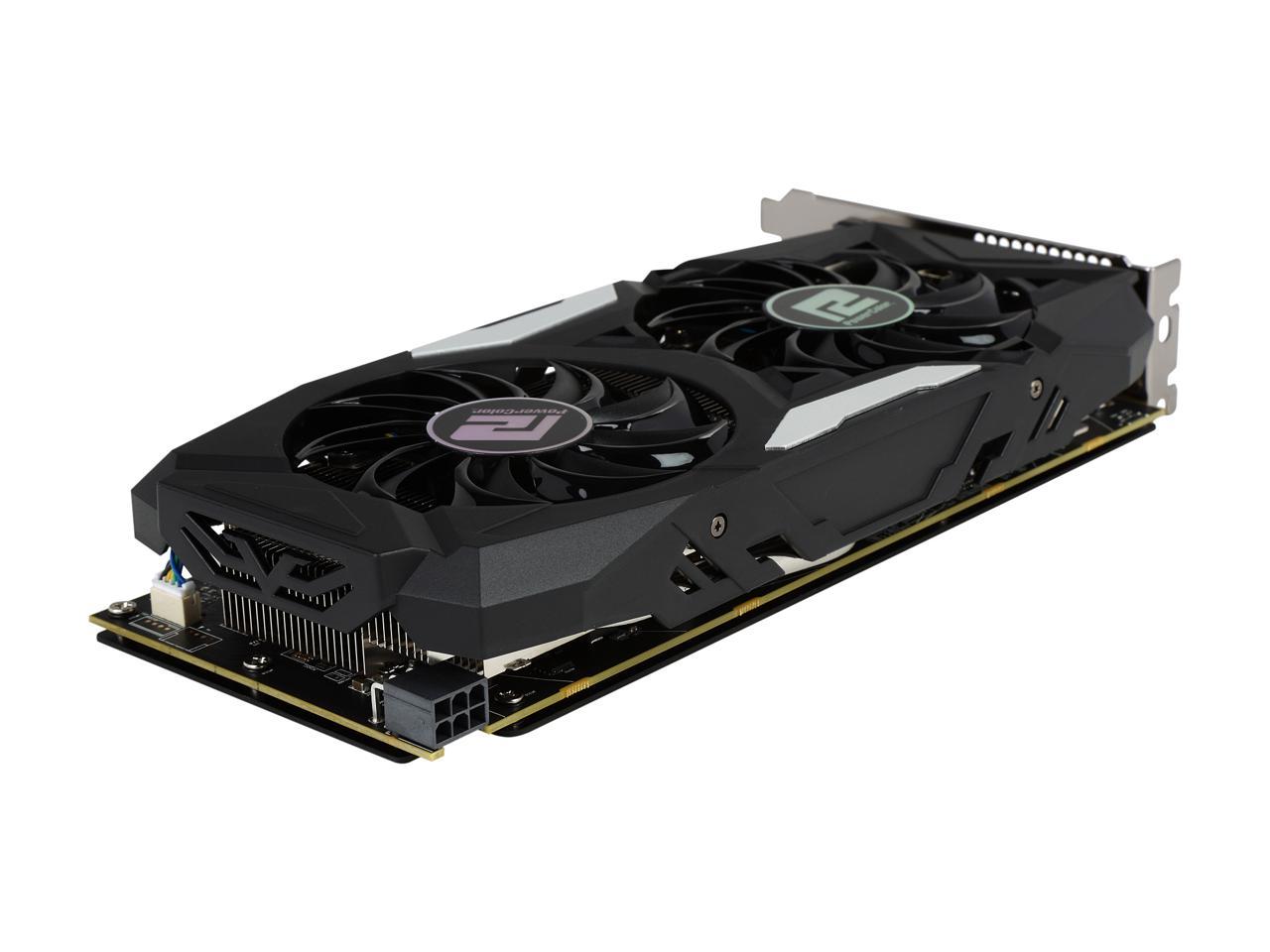 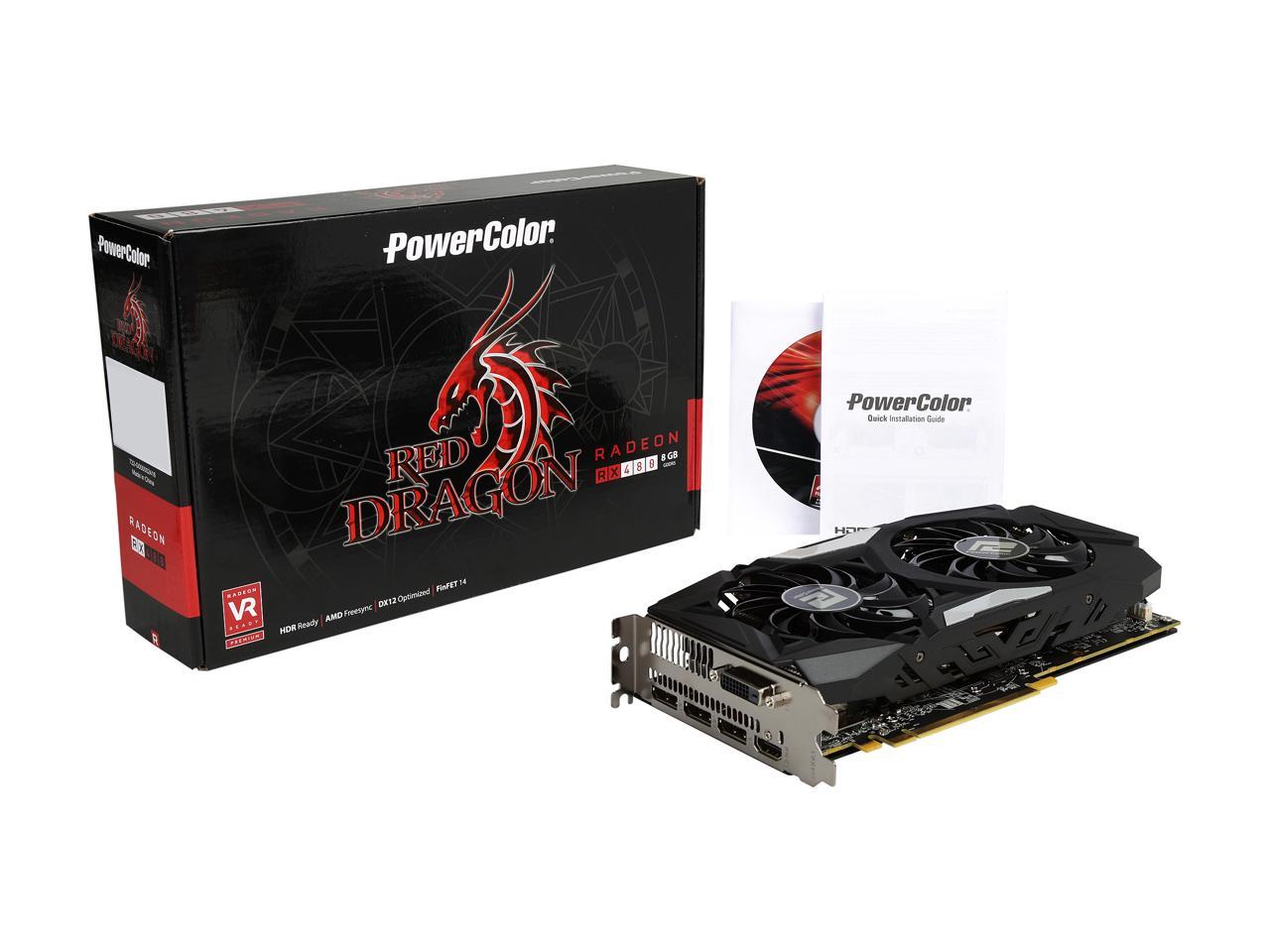 (7) Write a Review
OUT OF STOCK.
LOADING...
Overview
Specs
Reviews The Double Blades Fan can absorb airflow into the center and increase up to 20% airflow compared to the traditional thermal design. It also avoids dust deposition at the bottom of the fan that helps to prolong the life cycle of the graphics card.

Mute Fan Technology provides noiseless environment and reduces the power consumption when the GPU temperature is lower than 60°C.

Get quality that rivals 4K, even on a 1080p display while playing your favorite online games thanks to AMD's VSR.

A new design for AMD’s unified graphics processing and compute cores allows them to achieve higher utilization for improved performance and efficiency.

Next-generation API support for high-performance real-time graphics. Taking the best and brightest parts of Mantle to serve as its foundation, Vulkan is going to be one new and uniquely powerful graphics API.

AMD FreeSync technology puts an end to choppy gameplay and broken frames with fluid, artifact-free performance at virtually any framerate.

AMD App Accelerator creates a “co-processing” environment in which the compute processing potential in your AMD Radeon Graphics processor works together with the system central processor, to accelerate enabled applications.

AMD PowerPlay Technology dynamically adjusts clockspeeds in response to GPU load, saving power for just when you need it.

It maximizes performance under load conditions by dynamically increasing the GPU engine clock to take advantage of unused TDP headroom. It also allows users to configure their own TDP limit, within a provided range, for even higher performance or more power efficiency.

It ensures better security by helping protect the pre-startup- or pre-boot-process against bootkit attacks and faster startup times and resuming from hibernation.

*some products only support 64bit OS.

The Solidly-built Components enhance the stability, performance, efficiency and quality.

Overall Review: I have only had this card for a month and Ive been using very new drivers and kernels but so far so good. Stability with native Linux games has been excellent.

Pros: The price was the best for me. I got this GPU at the time for under $200. And it is a big upgrade for me. Its not noisy in my rig, Installation was easy, just downloaded the latest drivers and installed and no issues whatsoever. It isn't anything flashy and I am okay with this.

Cons: None as of yet

Pros: + Able to handle heavy loads with stability, as far as I can tell + Runs Doom at settings above what I can comprehend well above 60FPS on an old 1050P monitor + Fits smaller cases than triple-fan cards (Not much more room in my current Himars for anything bigger than it)

Cons: - Refuses to allow the fans to turn on until it gets very hot. As such, it constantly feigns cooler death when idle and I fear this card's longevity will be 4 years maximum, 2 years most probable. - Given the aforementioned issue, I cannot consciously install any card next to this one without feeling like this card will kill its neighbors. - Cannot override fan control, even with WattMan. Have tried 4 different versions of drivers. - PowerColor tech support is pathetic. (They do not respond to queries at all. Attempts to arbitrate through Newegg were fruitless.)

Overall Review: I could not consciously recommend this to someone unless their case is very well ventilated. I temporarily housed my build with this card in a case with only a single low-speed 120mm fan in the rear (a cheap Ultra from 2006), and due to its fan profile being so aggressively silent it managed to heat up everything around it to the point I believed the fan controller was dead. Due to this and unresponsive tech support, I attempted to kill the card by putting it under a gaming load. To my surprise, the fans came on (quietly) just before the card would have otherwise fried something. When I moved it to a better-ventilated case (Himars), the idle temp lessened to around that an old off-brand GTX560ti idled at in the worse-ventilated case. Since that 560ti became effectively unusable after 4 years due to cooler issues, I fear this card will suffer a similar fate. What made me go with PowerColor was I had an old Radeon 9600 Pro (for one reason or another they equipped it with the then-beefy 9600XT cooler) I indirectly bought from Newegg ages ago that lasted about 10 years before succumbing to mosaics and the cooler was still working like a champ. (In fact, I cannot rule out that moving that old card between machines so much in its final years or simply bad driver versioning practices on my part killed that particular card.) This RX 480 has made PowerColor lose that reputation for me.

Pros: the only cheap card with a backplate

Cons: don"t buy this card it will over heat even in idle mode. When i was gaming it really started to burn up and smell bad so I had to remove this card out my new build. Because it caused all my other parts to heat up. Also power colors website and customer service suck they will not accept refunds even with a warranty. Power color will only send you a refurbished model if the card is faulty.

Overall Review: Message to all grammes don't ever buy from power color save your money and get the graphics card you really want to buy.

5 out of 8 people found this review helpful. Did you?
Anonymous
Ownership: 1 month to 1 year
Verified Owner
Most expensive useless hardware I ever had5/28/2017 6:00:53 PM

Cons: Makes my system totally unstable, at first I thought it could be an incompatibility issue with my PC hardware, but then I decided to try it in EthOS and it's the same history, makes my rig unstable under load an idle too. This VGA comes with 2000 mHz Samsung memory, for miners this is exciting because in theory this can make you achieve like 30 Mhs, clocking the memory to 2200 MHz, but the sad history is this card cant even stand a 5% memory overclock without crash your system, no matter the OS you are using. For gamers it's the same history, the fan blades are so poor designed the card cant stand a 15 min game without reaching 90°C under 100% fan speed, in the end your game crashes with artifacts or even worse your PC simply crash one more time. It's incredible I just spent 220$ in a VGA to use my web browser (in lag mode). I had more than 36 video cards in my hands in the last 8 months and this is without any doubt the worst most expensive hardware I ever had. I was thinking about buy the Red Devil series after try this, but after this experience I'll never spend one more dolar in any Power Color product again. Think again before buy this product is not 20 bucks is 220$!

Pros: Seemed a good value, plenty of card for a good price.

Cons: Failed after two months of use.

Overall Review: We built two new systems, using this card in each. It offered a lot for a good price, and had plentiful positive reviews. After about two months, both systems started to experience what looked like classic Windows 10 issues; blue screens of death and random system freezing. Convinced the issue was with Windows, we started troubleshooting software. As freezing became more frequent, we began looking at hardware. Diagnostics indicated possible video card trouble. We removed the RX 480 from each system and installed a different card. No more freezing and blue screens. In over a decade of business with Newegg, these are the first new hardware failures we've experienced. This is something we attribute to Power Color's product. If it was just one card, it could be written off as a fluke. Two brand new cards with the same failure issues is something else. We recommend the extended Newegg replacement warranty, and steering clear of Power Color.

Pros: -None, the card wouldn't work

Overall Review: I work with computers on a daily basis. I have the most recent BIOS, all drivers installed, tried all PCI-E slots, ensured slots worked with my old card. Everything is compatible, hopefully the replacement will be better. Will come back and re-review then.