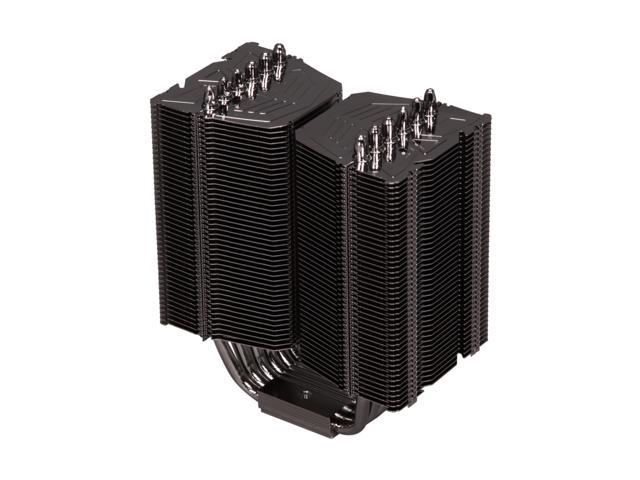 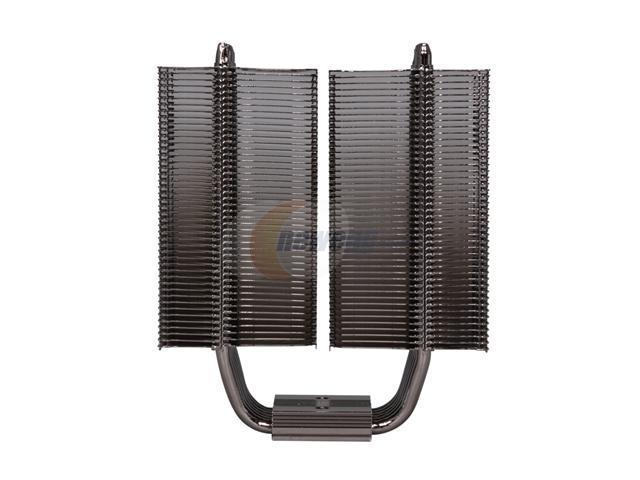 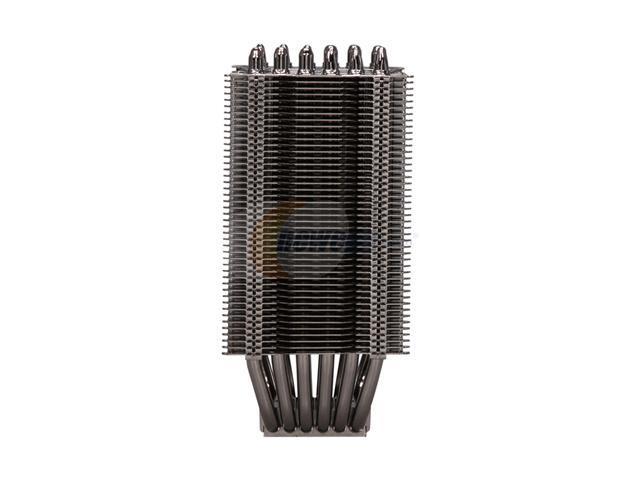 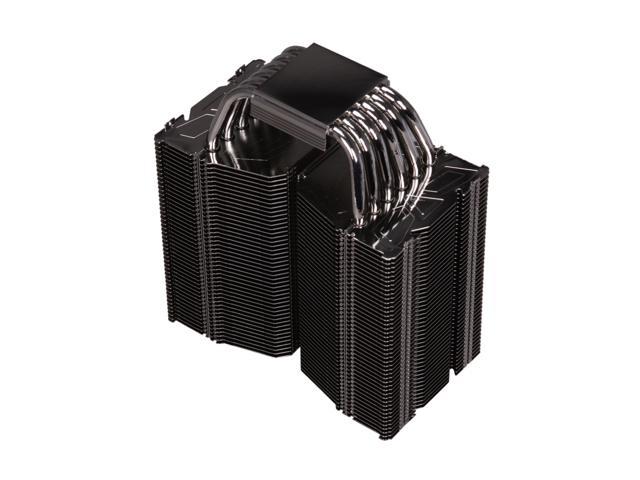 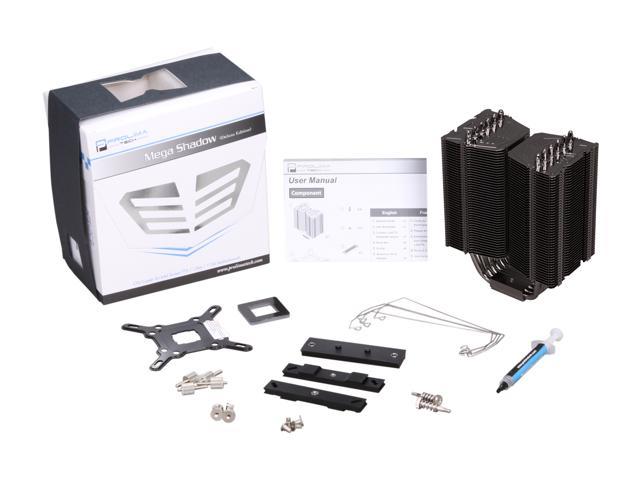 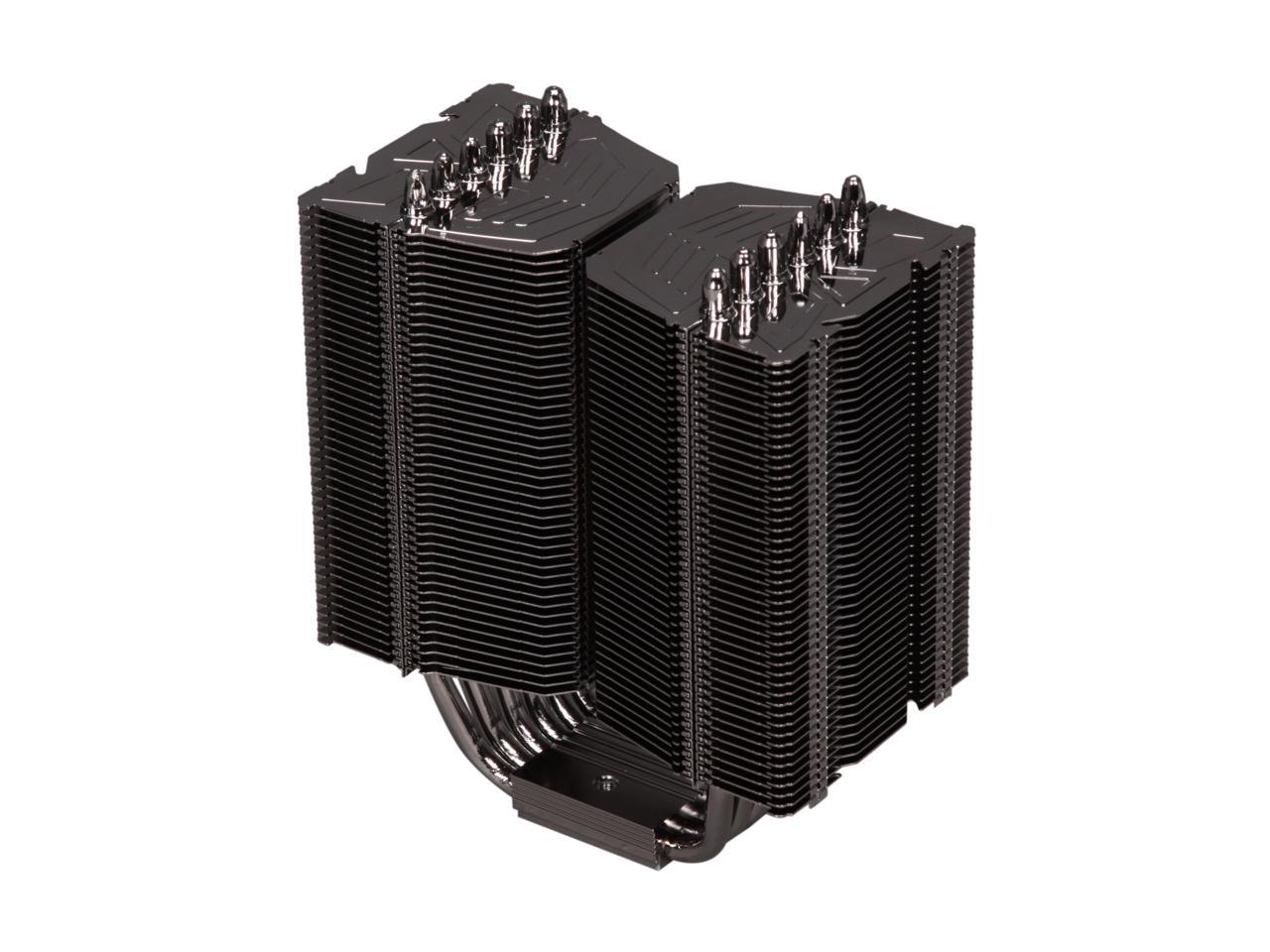 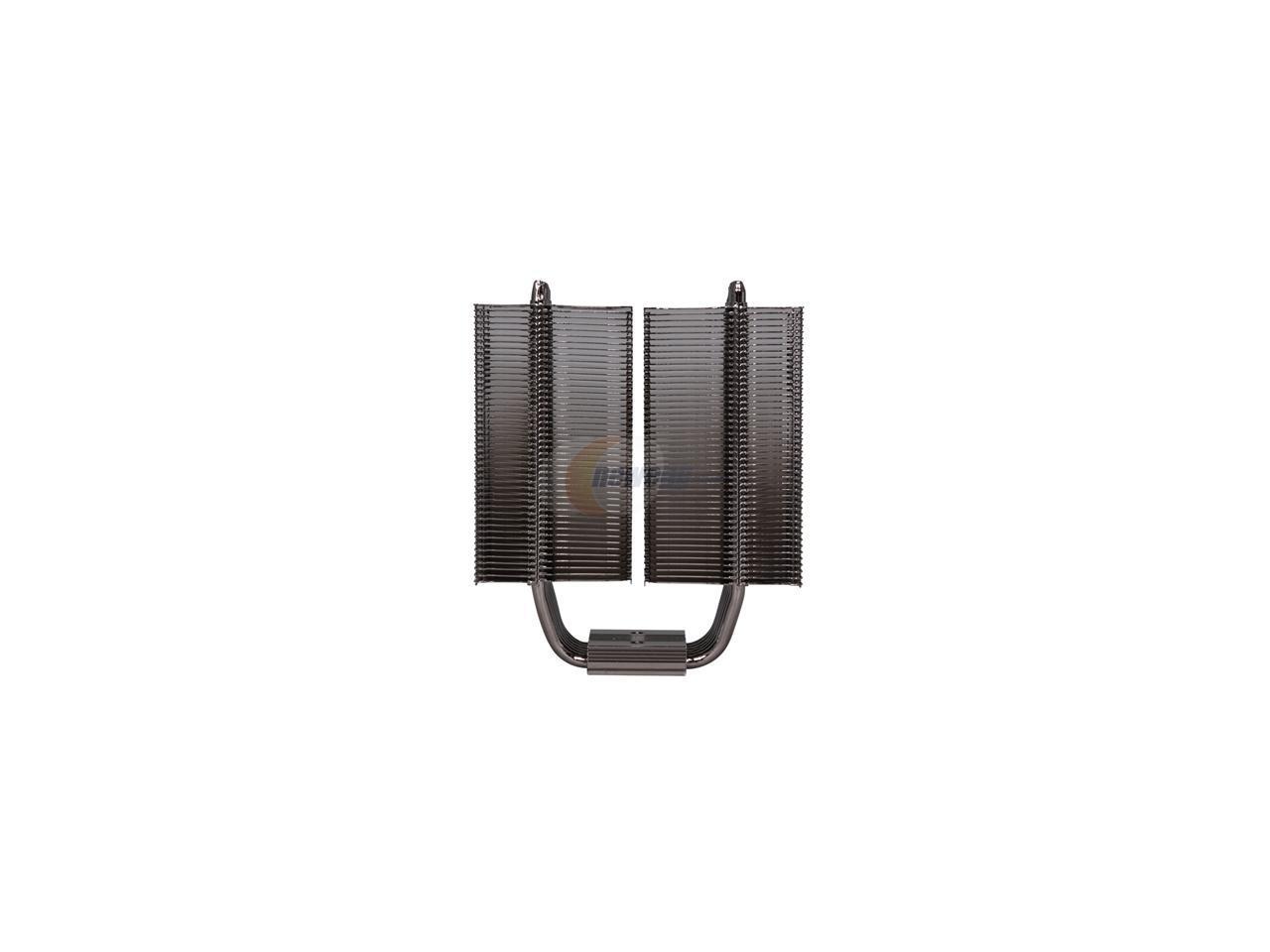 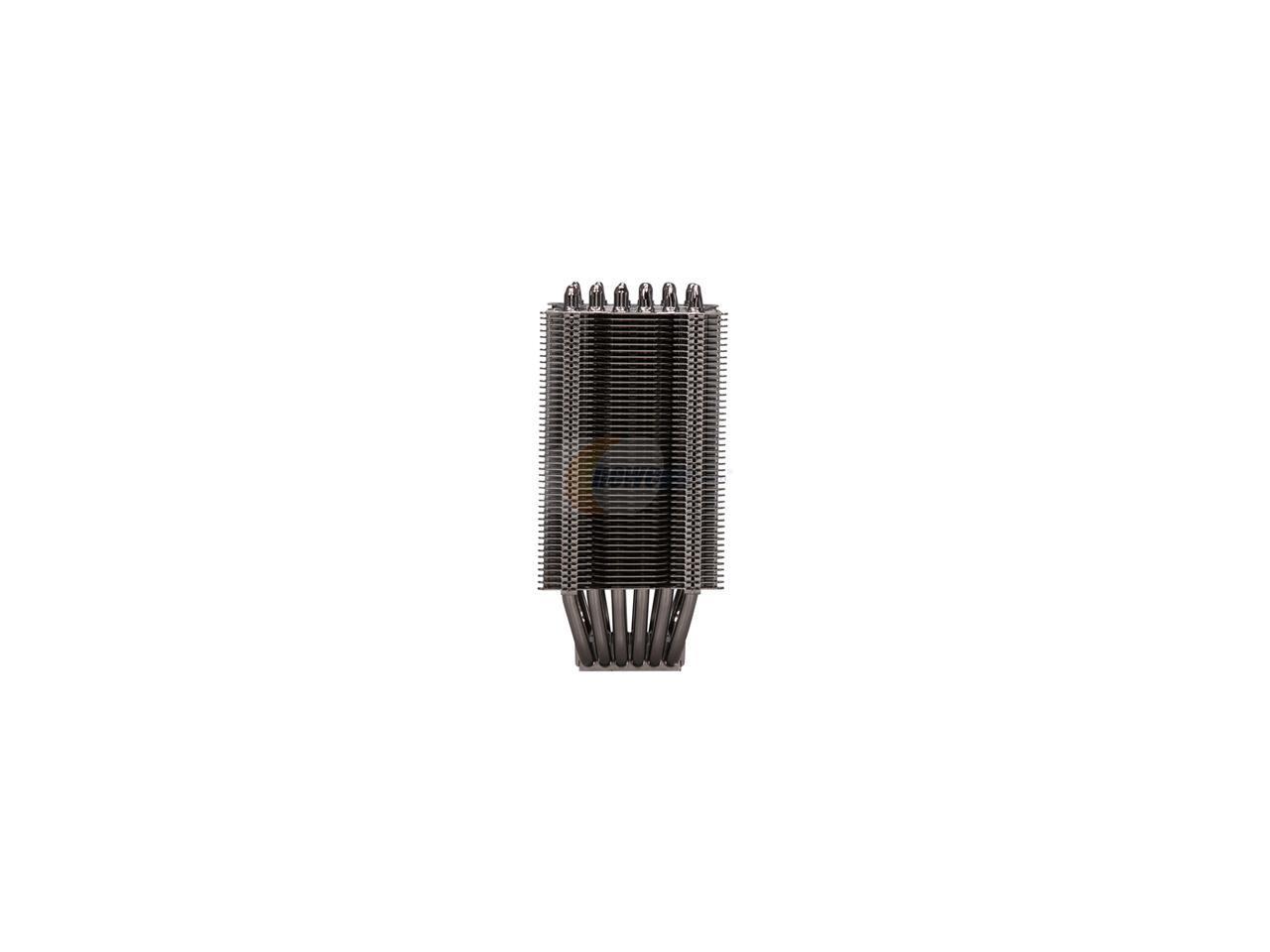 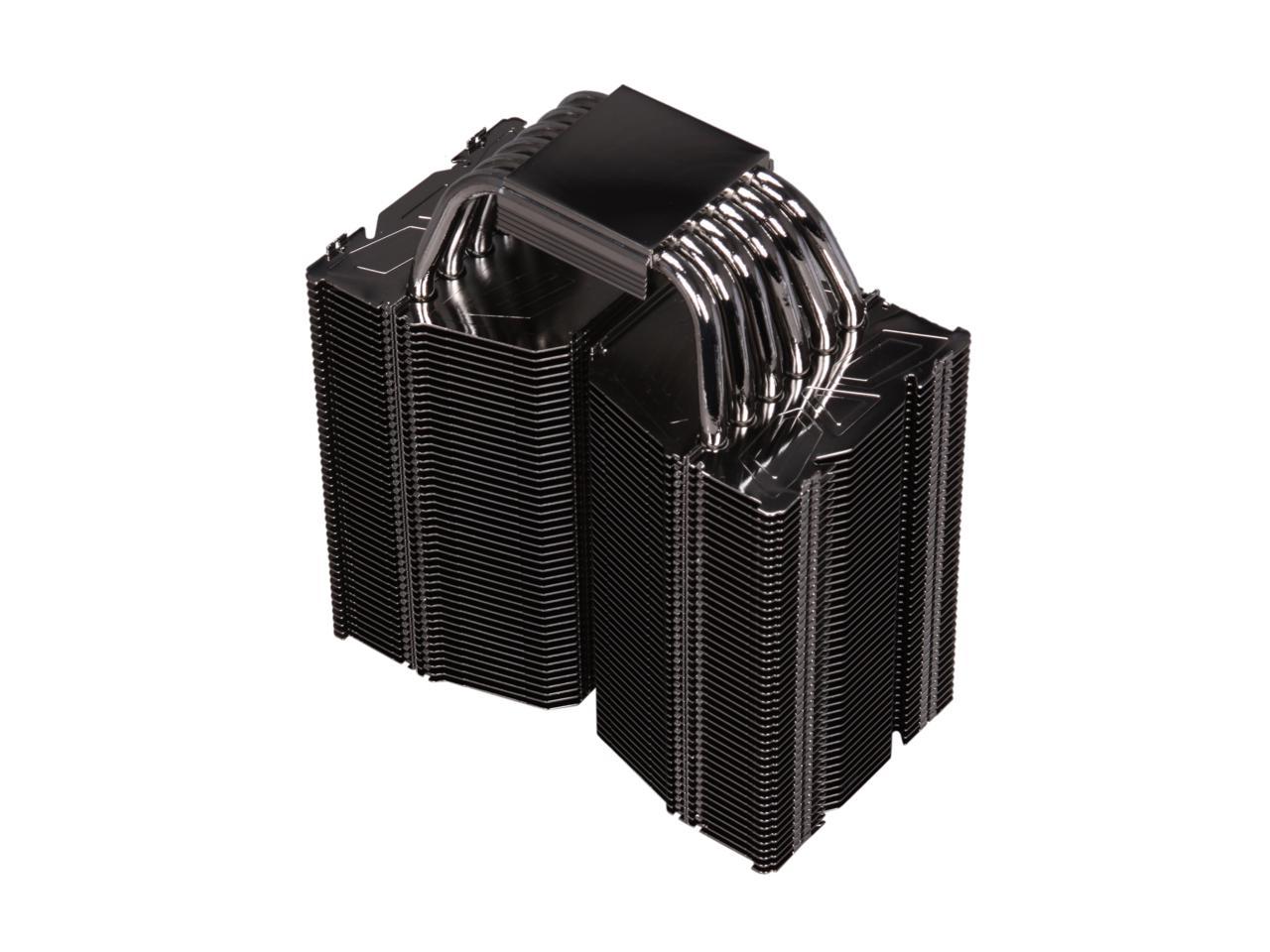 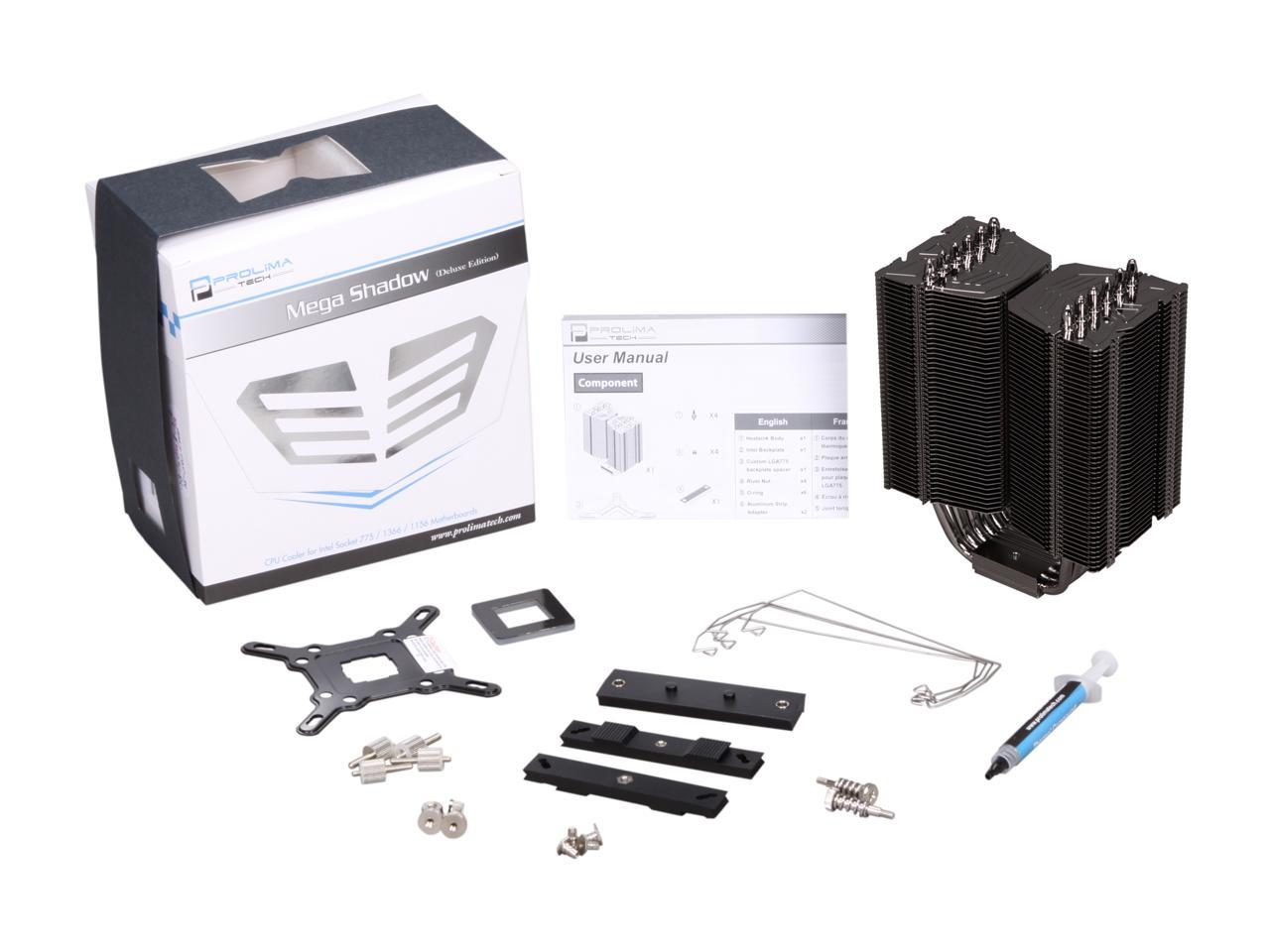 Pros: I openned the box and felt good about my purchase therefore it must be good. Installed it easy sneazy. Getting temps with 2 fans installed about 5deg cooler than my old Zalman cnps9700. Installing this cooler was fun. I had to sand an 1/8" off my 790i morth bridge fan shroud. Happy to play the handy man and honestly expected to have to do something. Personalizing your pc is what this cooler is all about. Plenty of fans to shop for and I went for quiet. What better air cooler to complement my black Lian li aluminum mid tower with 35% overclock? Love it. Showed a dude at work and he tossed his basic...water cooled cpu block for this and he giggles everytime he sees me. I guess it makes him feal good too.

Cons: Spent a month thinking about the cons. There are none.

Overall Review: I would preffer to torque the screws down rather than trust that the albeit incredibly secure install setup is finished. I am used to giving the screws a last half turn after giving the compound some time to set. If you understand what I just said then you know it isn't important and should email me at longwindedguydotcom. The backplate and install brackets are unmatched in quailty. I have read about others being very satisfied with this I was indeed suprised with how secure it really is. I want to install more of these for the fun factor.

Pros: EXCELLENT cooling efficiency. I'm running it right now without a fan attached to it to see how well it can cool just on it's own. I'm sitting at 17, 14, 17, 14 C according to CoreTemp on my q6600 g0 SLACR in an antec 900 case. Installation was much easier than the stock intel heat sink for those familiar with that process, it fits very snug, instructions are pretty darn straight foreward and installation overall is cake. (Matching correct RAMs to the motherboard is a more mentally demanding task to give you an idea of just how easy this is.) Haven't OC'd yet as I'm still benchmarking it across a wide range of tests, but even after being on for about an hour and without a fan on the shadow, and with ambient temp of 20C (therm is sitting 5 feet from the case), it's JUST now going up by one degree to 17, 14, 18, 15 and is dancing back and forth between that one degree increase and the initial temp. In the same conditions the stock intel cooler would be at about 36C.

Cons: Not actually a con, but could very well turn into one if you don't pay attention. This thing is HUGE. I mean freaking HUGE. I knew that going into it, but when it arrived and I pulled it out of the packaging, I almost $#&@ a brick because the pictures and reading the measurements just doesn't deliver the full impact of just how big this thing really is. KEEP THIS IN MIND when you're looking at clearance. In this case (mid tower case which wasn't an ideal scenario), it has very little clearance, and getting the mobo into the case with this cooler installed was extremely tight. I had less than 1mm of clearance on all 4 sides of the board and the edge of the cooler as I was putting it into the case. With the intel stock cooler, getting the board in and out of the case was a breeze. Just something to keep in mind.

Overall Review: A true testimonial to this cooler's capabilities lies in the fact that the cooler is keeping the cpu colder than the ambient temp of the room. Another thing to keep in mind, is that it's doing that without an attached fan to the cooler. ATM, I've got my core clocked at 2ghz, about 10-20% load on 2 cores, others less than 5%. Not much heat generation going on there, but still there is enough that with most coolers it should at least be room temp. It's very pretty too. I'm going to be a very sad panda when dust starts to settle onto it and dulls the shine. Overall, this cooler is so absolutely worth it, just make sure you accommodate for clearances and proper air flow to really make this cooler perform to it's potential.

Pros: The best air cooler you can get. I was previously using the H50 on a 3.6 ghz i7-920. Idle temps of individual cores ranged between 38-39 C and 64-65 C under 100% load. Replaced the H50 with this and am now getting idle temps of 33-35 C and 55-57 C under 100% load on the hottest core. H50 performance was good but I had started seeing reports of leaks popping up on their user forums. Better cooling performance with the Prolimatech and no chance of leaking

Pros: It doesn't look black like in the pictures, more like black chrome. (that's what my zippo's called) Amazing cooler, it keeps my i7 920 @4.4GHz HT ON 40-42 idle, 65-70(hottest core) under 100% load. Paired it with OCZ Freeze, and 2x Scythe Slipstream 120mm 110CFM fans in a Push-Pull configuration and while it may be a little on the louder side, it keeps everything cool. It looks like the decepticon logo to boot!! Installation was painless, re-seating the MS is also fairly easy. OH!! It matches my watch & Zippo, which was very important to me... Installed on an Asus P6T Deluxe V2 with no issues on clearance w/ Corsair Dominator CL8 1600's. The pictures really don't do this thing justice.

Cons: erm... I paid more because it was purchased from a brick & mortar store. (before newegg carried it) Oh, and I sliced my finger (not a proud moment for me there) during installation on the fins..

Overall Review: Coming from a CM V10, that just wasn't giving me the results I wanted (still a great cooler, this is just better) Fits inside my Antec 1200 case (ugly, but great airflow) with space to spare, although the area on the side panel to install a fan is blocked, I wouldn't use it anyway. This cooler under strobe lights looks evil.. I like it >:]

Overall Review: It not only looks great, it cools great! I have no regrets on this purchase and found the installation painless.

Pros: I have been building computers for about 15 years now,and have used many different brand of coolers. I just installed a Xigmatech Dark Shadow on a I7 920 EVGA X58 LE system. Temps were not low enough so I pulled it & put in Mega Shadow. Under load 9 degrees cooler.

Cons: Price is a little high

Overall Review: I am an old timer so I used Arctic Silver 5. Clocked the 920 DO to 3827.48. 32 degrees at idle and 62 load LinX 100 runs. Took it to a little over 4 GHZ , just to see if would do it. No problem gettin' there either. Temps went to 72 load on LinX for 20 runs. I backed every thing to 3.2 and gave to customer. I would recommend this cooler to anyone wanting to overclock. Better have a big case!