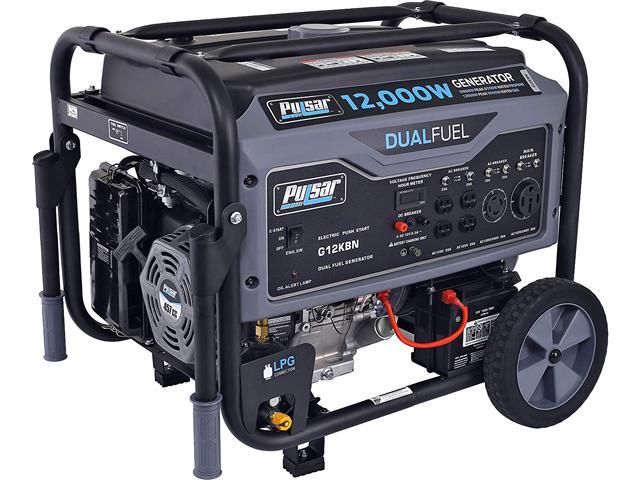 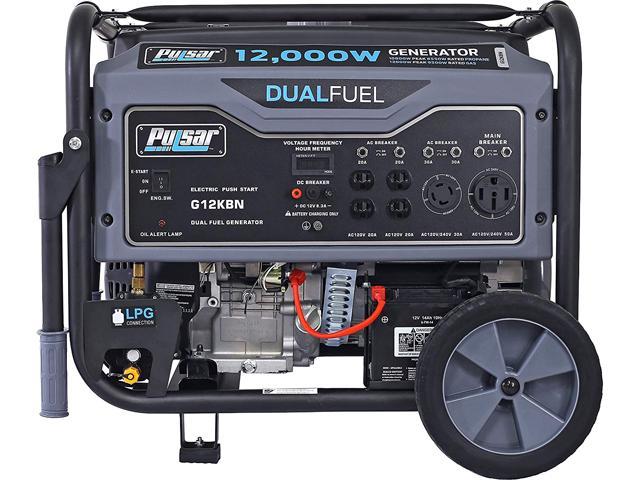 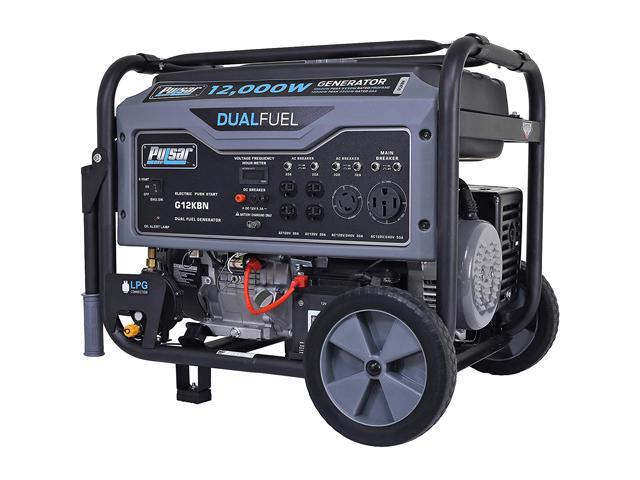 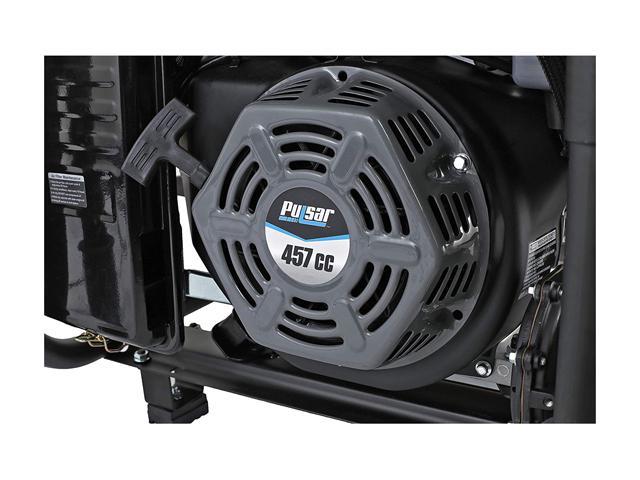 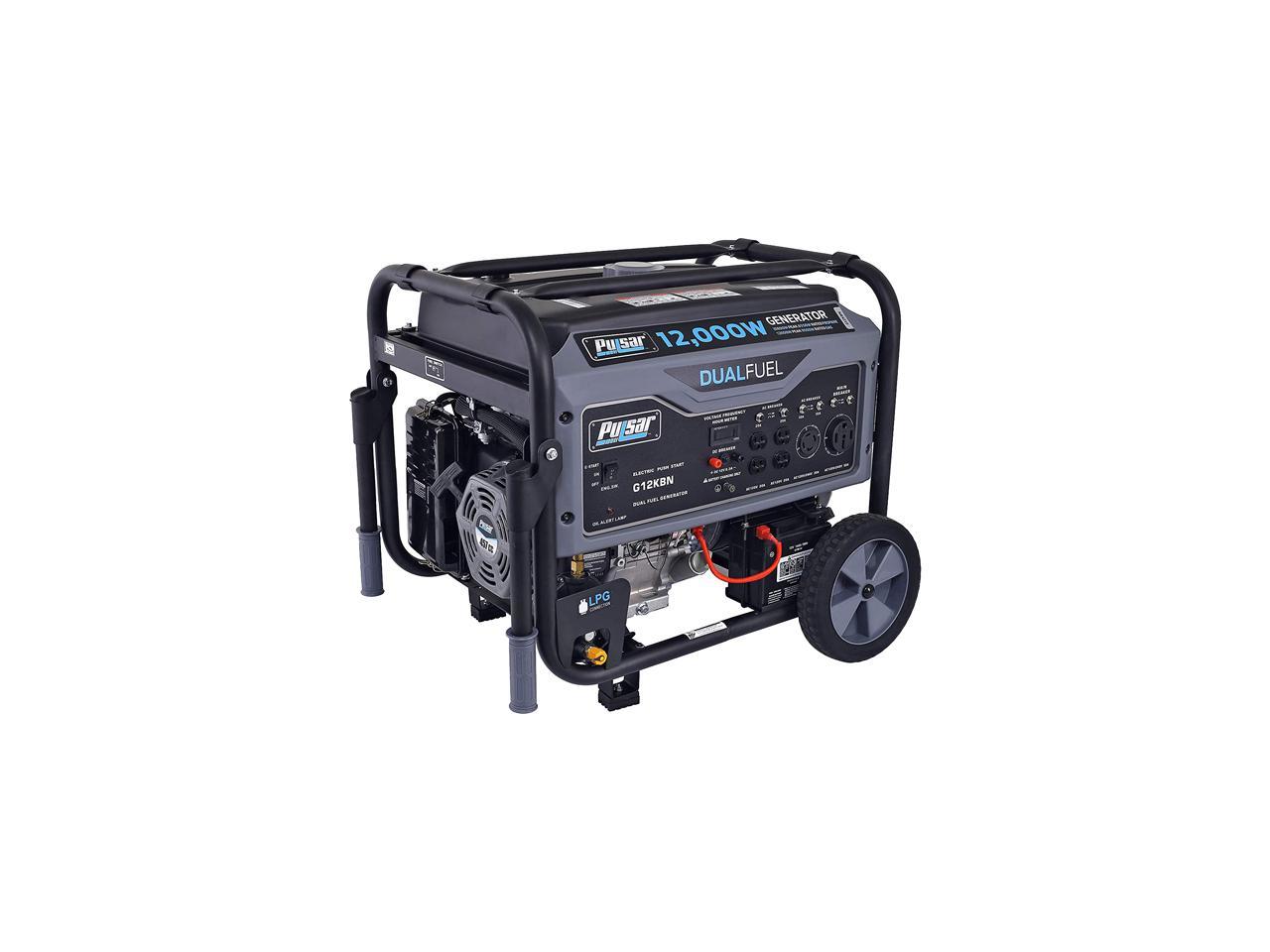 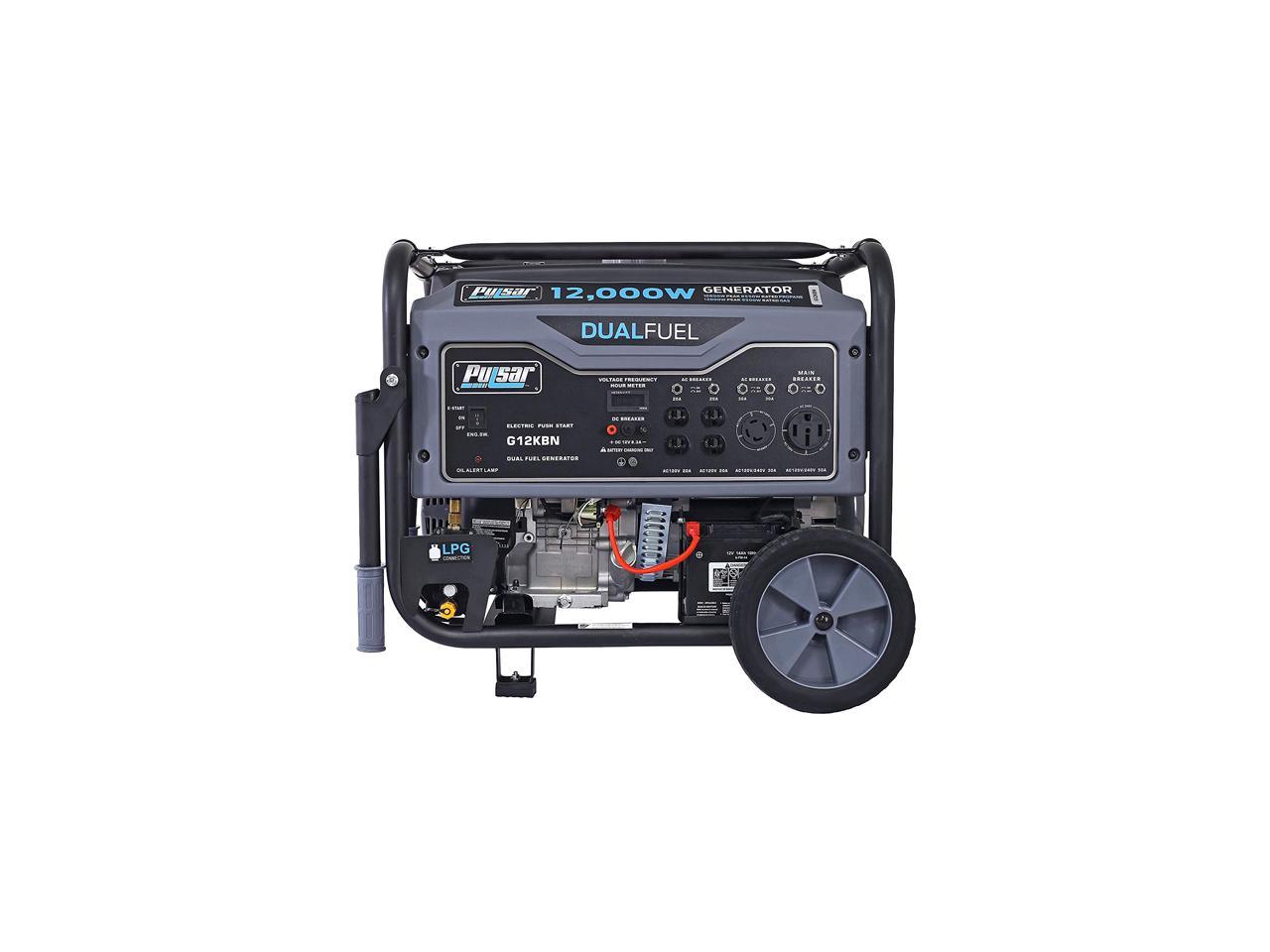 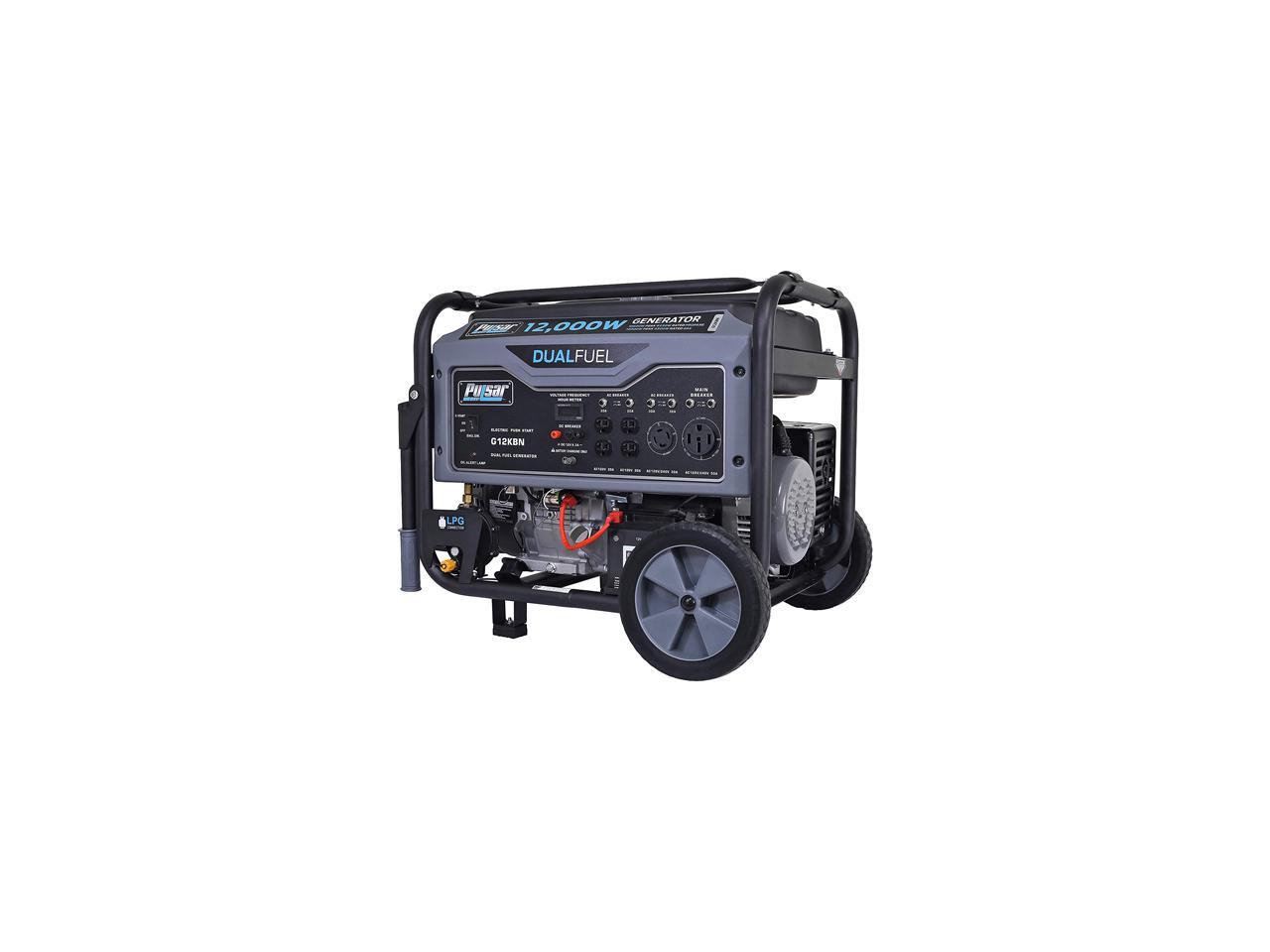 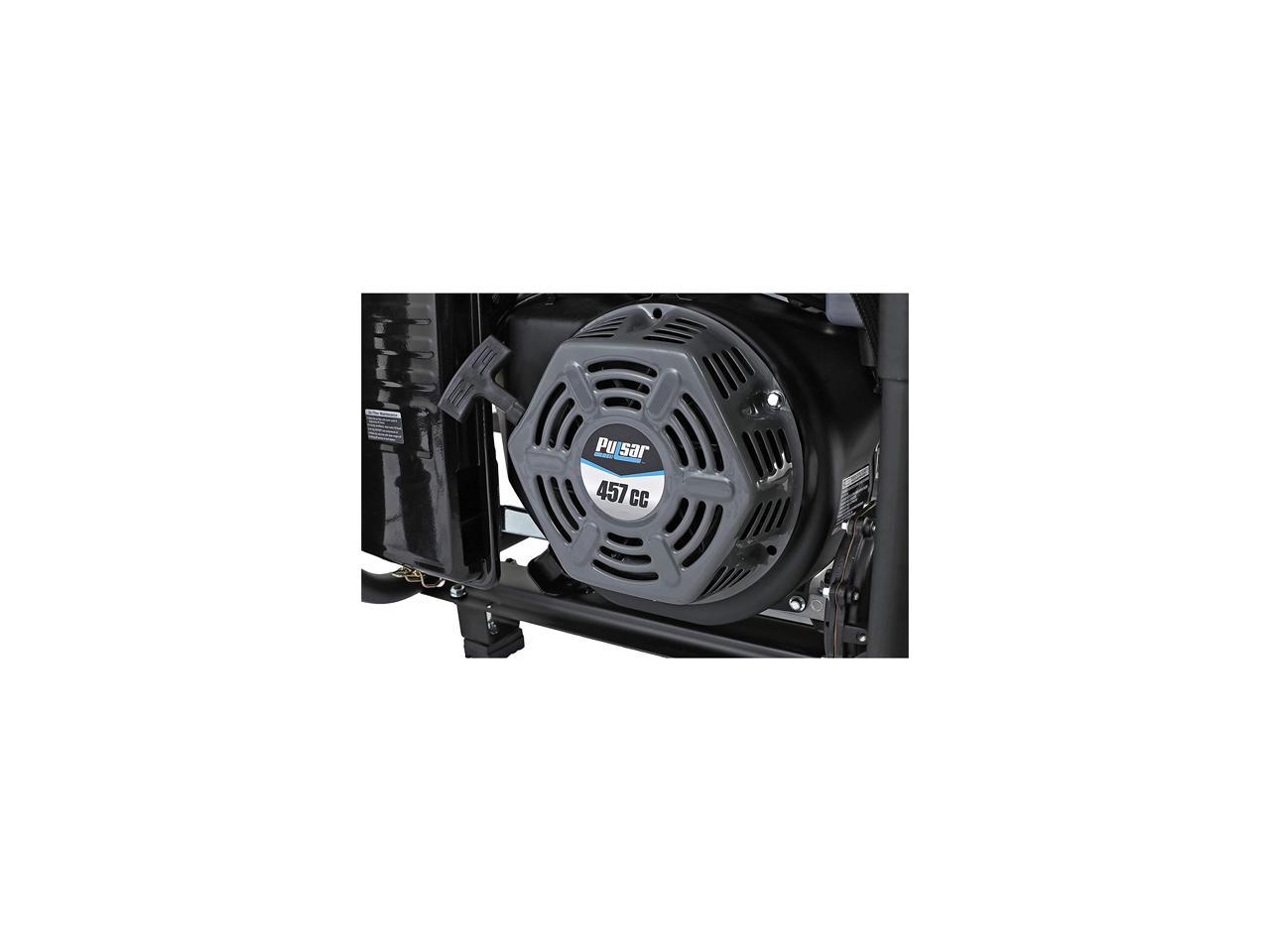 The G12KBN produces an impressive 12,000W(GAS)/10,800W(LPG) and is capable of powering major appliances in the event of a power outage. Dual fuel capability gives you the option to choose between running your generator on gasoline or liquid propane fuel sources, which is great in the event of an emergency when propane (LPG) may be more readily available. The durable frame with convenient drop-down handles and 10” never-flat wheels make this generator both portable and easy to store. Featuring (4) 120V 20A AC Outlets, (1) 120V/240V 30A Twist-Lock Outlet, (1) 120V/240V 50A Outlet, and (1) 12V DC Output, so you can rest assured that the G12KBN has got you covered. The G12KBN gives you the ability to choose between fuel sources, with the option to run your generator on either Liquid Propane or Gasoline, great in the event of an emergency or natural disaster. Capable of up to 12 hours of operation at ½ load on just 8 gallons of gasoline! The convenient electric push start makes turning on your generator quick and easy!

A portable generator for every weekend warrior: The Pulsar lineup of RV-friendly generators packs the power

Learn more about the Pulsar-Products G12KBN

Pros: Easy to assemble. Comes with propane connection handles and wheels. Easy to understand instructions. Once assembled and oil added started on propane on the second start press. Loud but not as loud as I expected.

Cons: Awful oil location. A four to five inch longer spout would have greatly improved the design. Oil Drain is right next to one of the feet so consider that when adding the foot on that side since you do have an option on where to install it. Could use a note on the warranty card on where to locate the serial number. It is engraved on the crankcase above the oil drain.

Overall Review: I would recommend this generator highly.

Pros: - Easy set-up. Wheels, 2 feet, handles. - Not really as heave as it's made out to be. - Easy to move around with the wheels. - Does not "shake" as much as some reviews that i have read state. It actually ran way smoother than my previous DuroStar, was only shaking a bit until it warmed up, maybe 5 mins. - Quieter than my previous Dual Fuel Durostar (4400W). - Great packaging, shipping. - Amazing value. - Came with funnel and cup for easy oil addition.

Overall Review: - Overall it's an amazing value for the price I paid. I would definitely recommend it to anyone looking for a portable whole house generator.

Pros: Delivered quickly and assembly was easy. 2 weeks after I received this we had a 26hr power outage and the generator ran continually under heavy load without a hitch. It started on propane and after 2 hours seamlessly switched over to gas. Having read other comments, I was nervous if I could really keep it under heavy load for a long period of time, but no problems after that first test. It was able to start and run my 5 ton ac plus many other devices simultaneously.

Overall Review: Great power and features for the price. Definitely recommend this for occasional backup power use.

Pros: My generator was not delivered on a pallet, the box had one or two small tears with no damage to the generator. Unpacking and assembly was easy. The picture shows what was in the accessory box. The plastic bag holds a funnel, spark plug wrench and hardware to attach the wheels and handles. The funnel is handy for filling the motor with oil. Before starting I used the hand pull starter to pull through the motor quite a few times to get some oil into the cylinder head. The battery cables were already attached to the battery and there is a connector in the battery wires so the battery can be completely disconnected from the rest of the generator, nice touch. The battery was fully charged, 12.9V. Starting on propane with the electric start was very easy. The motor started on the first few compression strokes, air temperature around 40 degrees F. I used the choke but I am not sure it was needed. The propane regulator fits a standard backyard grill tank. If you use a different type of tank you will need an adapter. I ran the generator for an hour on propane. The generator has a three function digital meter, voltage, frequency, hours in hour only (HHHH) and hours in hours and minutes (HH:MM). With a light load, about 1,500W the meter read 244.1 volts, frequency 62.3 Hz. There is an adjustment under the gas tank that can be reached with a long shank #2 Phillips screwdriver that will change the motor RPM which changes the frequency. The RPM/frequency changes with load. If you have a constant load the frequency could be set to 60 Hz. I checked the frequency and the meter read 0.5% high. The battery voltage when the generator is running is around 13.9 v to 14.0 V which is okay for keeping the battery charged. I unplug the battery when I store the generator so it doesn't run down. The battery charger output voltage on the front of the generator for charging a car battery is 14.8 V with no load. The generator ran for an hour on propane without any problems. Propane is really nice because there is almost no smell. As soon as the valve on the propane tank was closed the motor died. My generator has a sticker that reads Made In Vietnam. There is not a lot of plastic, the gas tank is metal and the air cleaner box is also metal.

Overall Review: I am happy with the generator and it is a good value for the price. At the price with free delivery it is 5 eggs.

Overall Review: Delivered on time in good shape. Driver brought to carport with pallet jack. No oil incl. but as expected. No complaints, works fine. A little loud but as expected. Really like using propane so as not to have to run gasoline out of tank. Manual switch into main panel with no. 6 cable runs entire house with 2 central ac units. Like hour/volt/hz meter but would rather have amp monitor. Pop out breakers cheap but for the $ a good buy. Would like NG adapter.

Pros: Runs everything without a problem. Starts easily and is very simple to service. This is a true bargain in whole house size generators!

Cons: Slightly noisy, but nothing that we haven’t been able to sleep through.

Overall Review: Make sure that you order good cables to hook up to your load. It makes a big difference.

Overall Review: After last winter we decided it was time to get a generator that would work during a power outage & allow us to run a wood furnace, water & some appliances. This Pulsar had good ratings & worked with the Genalink we were going to purchase. It arrived fast & was in perfect condition. We’ve made sure it works both on gas & propane. We hope we never experience an outage lasting 16 days again but we’re ready if it happens.

Pros: I've had this generator for awhile now (almost 3 years). Used it to take me through small outages (nothing more than 2 to 3 hours). But then the snowpocolypse in Texas happened and we essentially had no power for 4 days. I ran this generator for about 20 hours per day (sometimes the electricity would come on for a couple of hours) - purred like a kitten the whole time. I am using a subpanel where I chose 10 circuits that I have selected to run things in our house (Connecticut Electric subpanel). I'm running a refrigerator, a freezer, an office full of computers, 4x55+ inch TVs, Xboxes, internet routers / modem, house lights, fans, ipads/iphones, and because it was so cold we were running 3x1500 watt space heaters. At one point, I shutdown one of the space heaters and baked a pizza in a 1500 watt toaster oven. All our neighbors were without power, and things were near normal at our house. I did test the functionality of running off of propane, and it worked perfectly. Also, I bought a device called a "gas tapper" which allowed me to syphon fuel from our cars - which gave us good running capacity. Although I never ran out of gas while running this thing, it has an 8 Gal tank, I never had to had more than 5 gallons to it every 10 hours. Which for me was surprisingly good for the load it was carrying. We ran 2 space heaters and shut off what we could (minus the fridge and freezer) - so we could use less gasoline. I didn't have this thing perfectly level, but the gas gauge almost always showed we were empty when we'd used about 5 gal out of the 8. It's possible I wasn't able to completely fill the tank because it wasn't level, but I'm not sure. The only thing I want to do now is upgrade my house wiring. The limiting factor for us right now is my wiring is the 30 amp connector only, so we can only use about 7500 watts max, but I want to upgrade it to the included 50 amp connector so we can use it ALL!

Cons: It's loud. It's heavy. Not Pure Sine wave. My batteries for my computers would trip on and off because this, like all generators that are not "inverter" generators produce square wave power. Since I run so much computer equipment, I might consider getting an inverter generator.

Overall Review: I would recommend this product to other people, and I have. My neighbor bought one after he saw what it could do. I would buy this again.