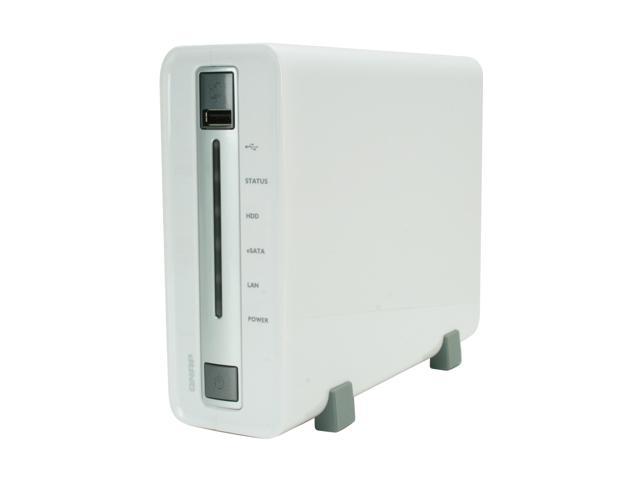 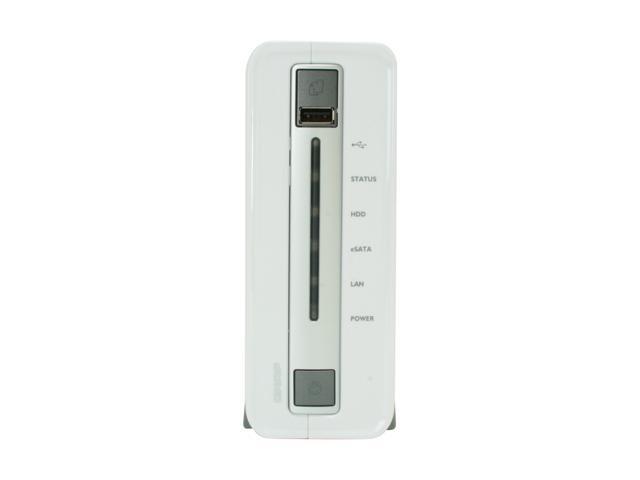 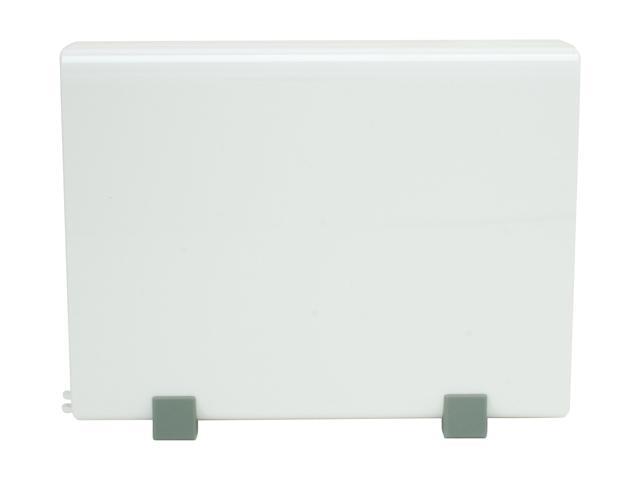 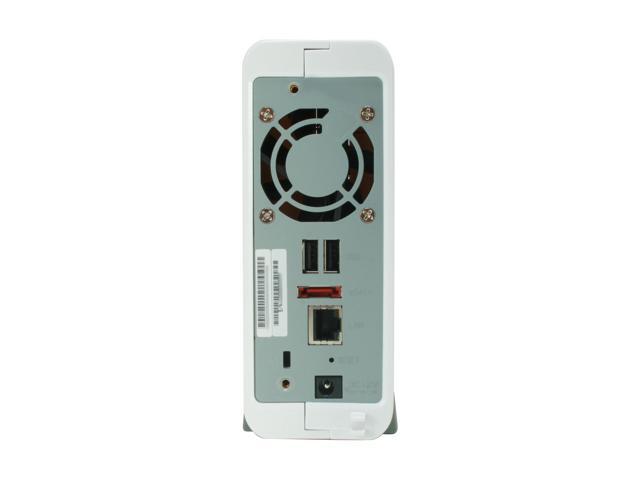 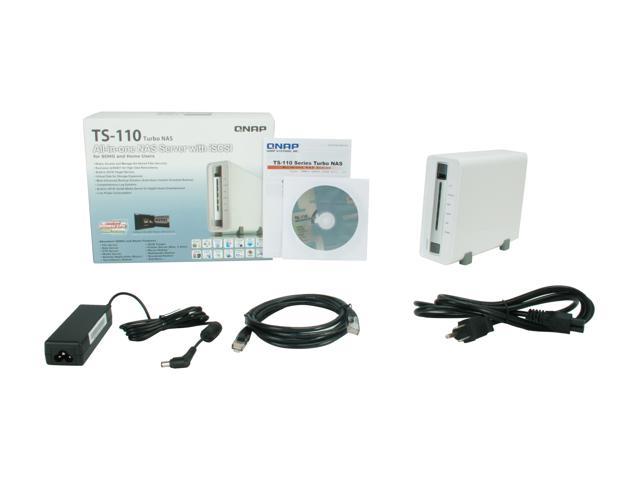 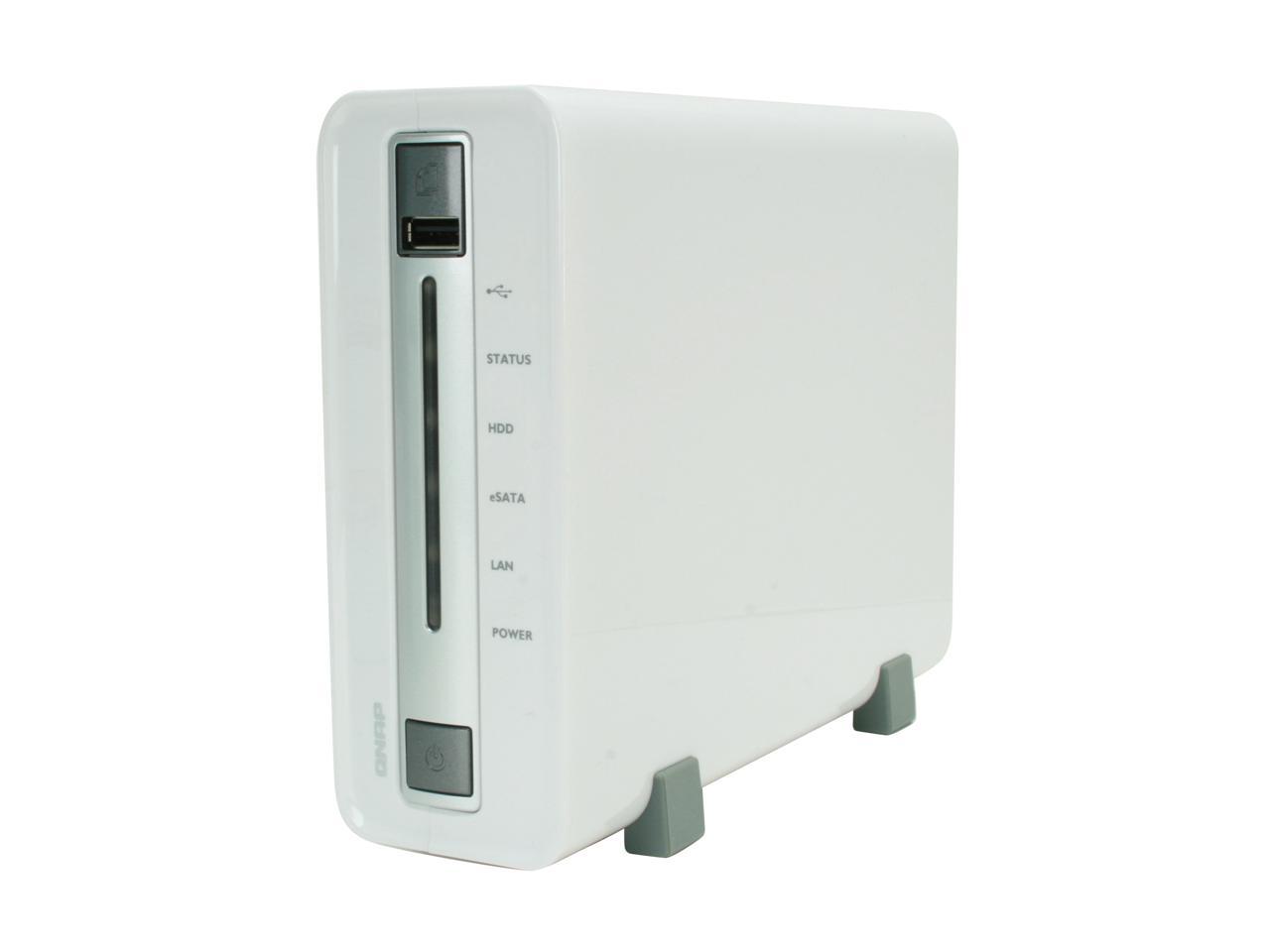 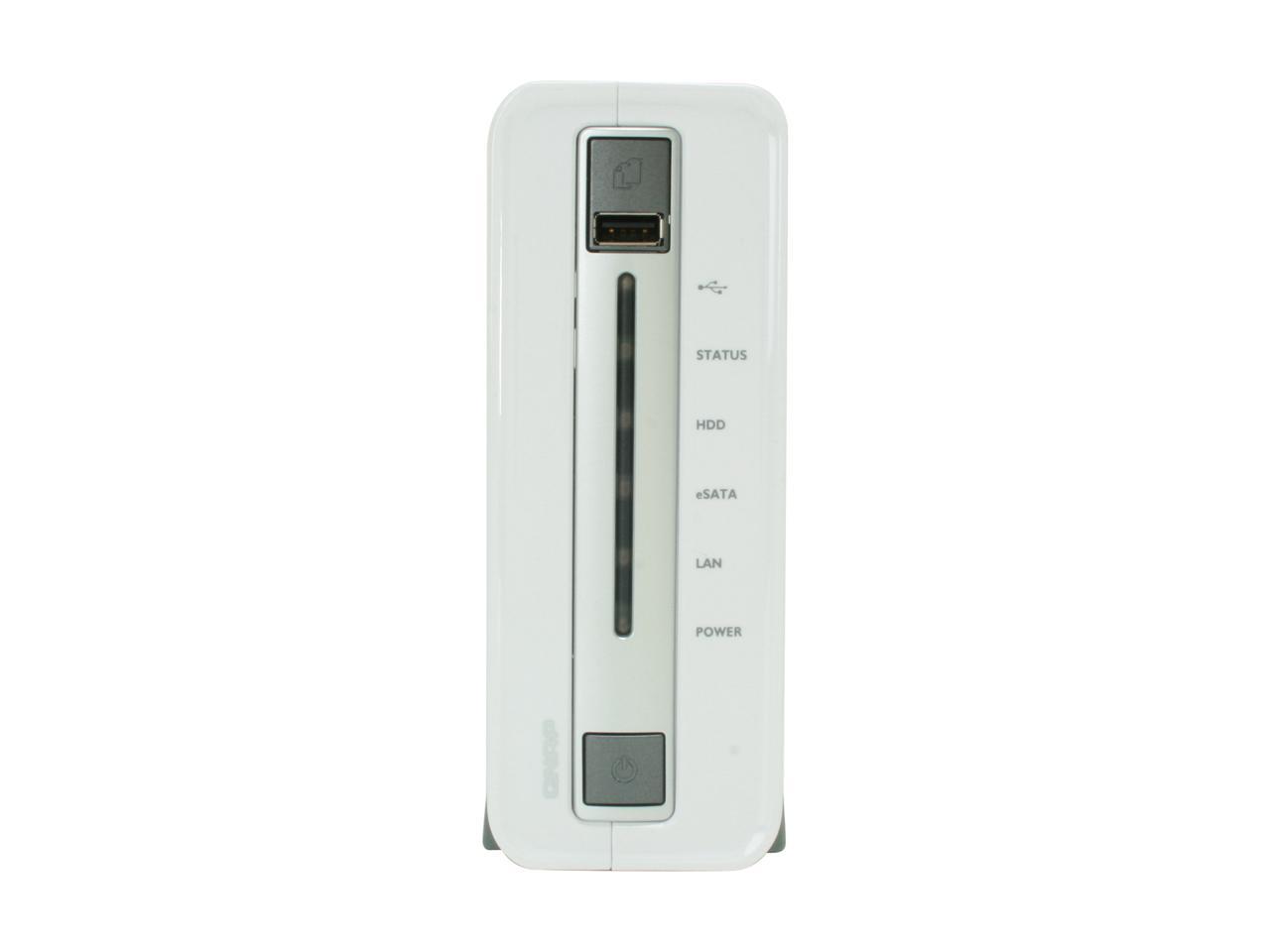 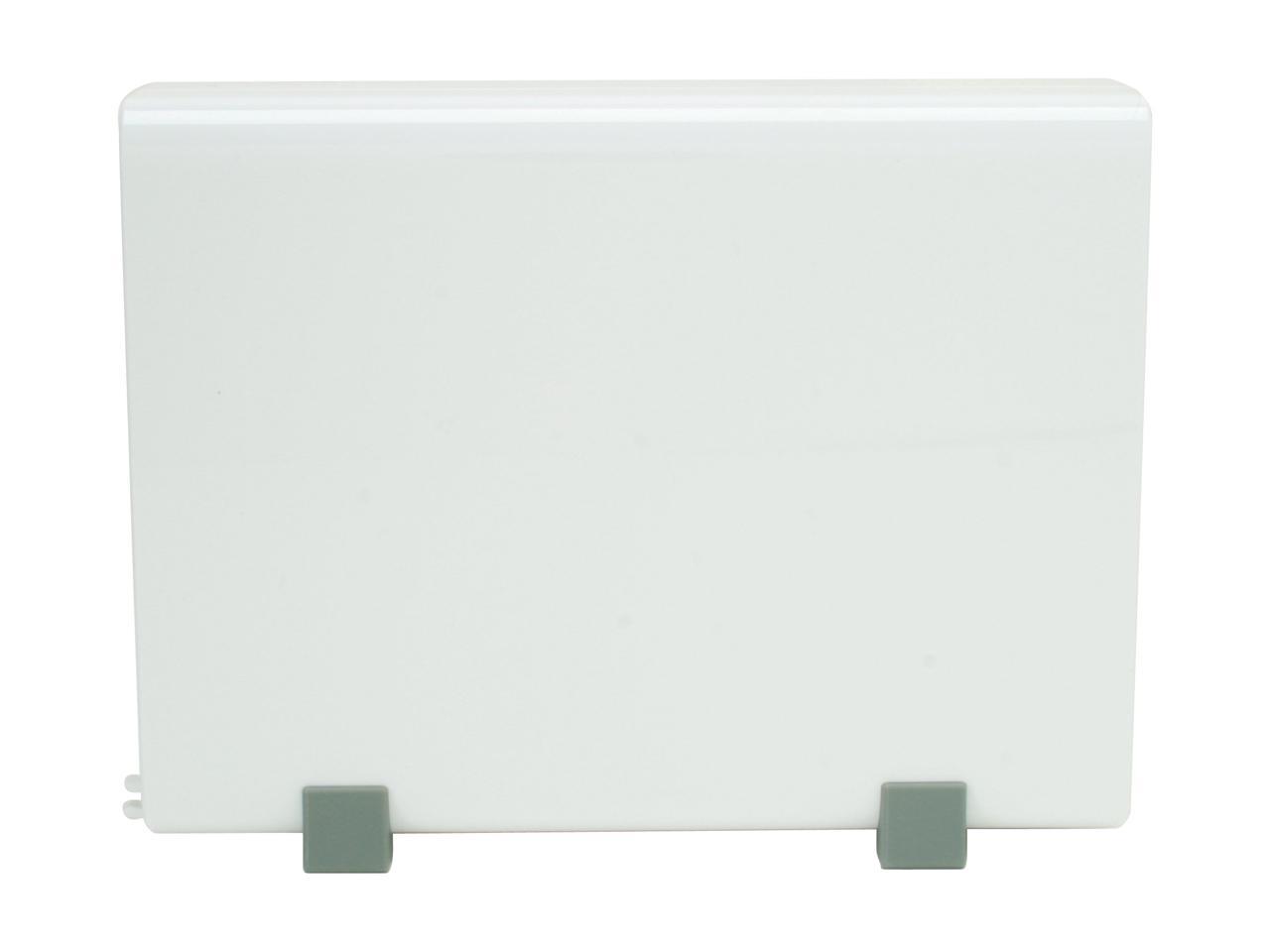 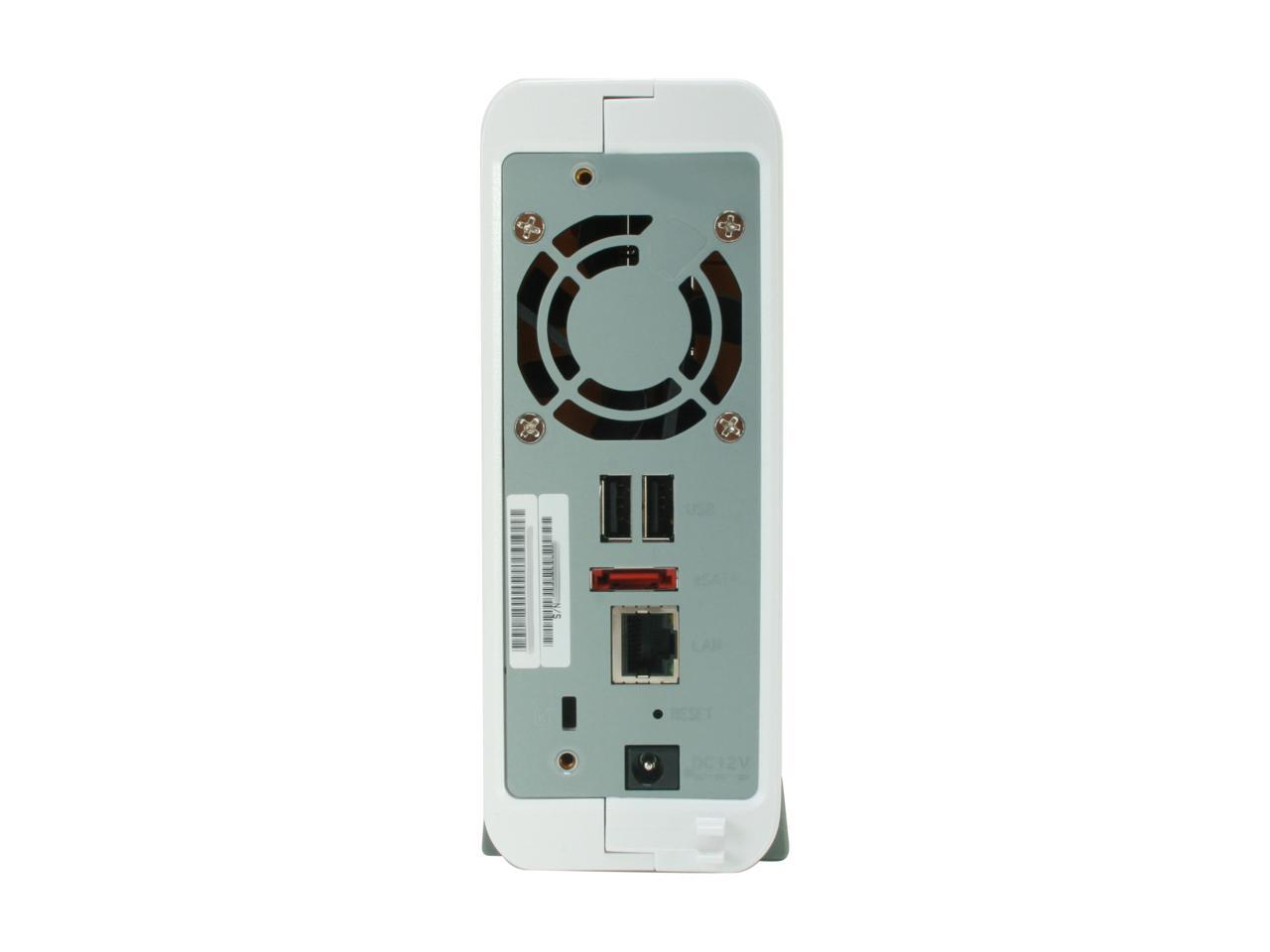 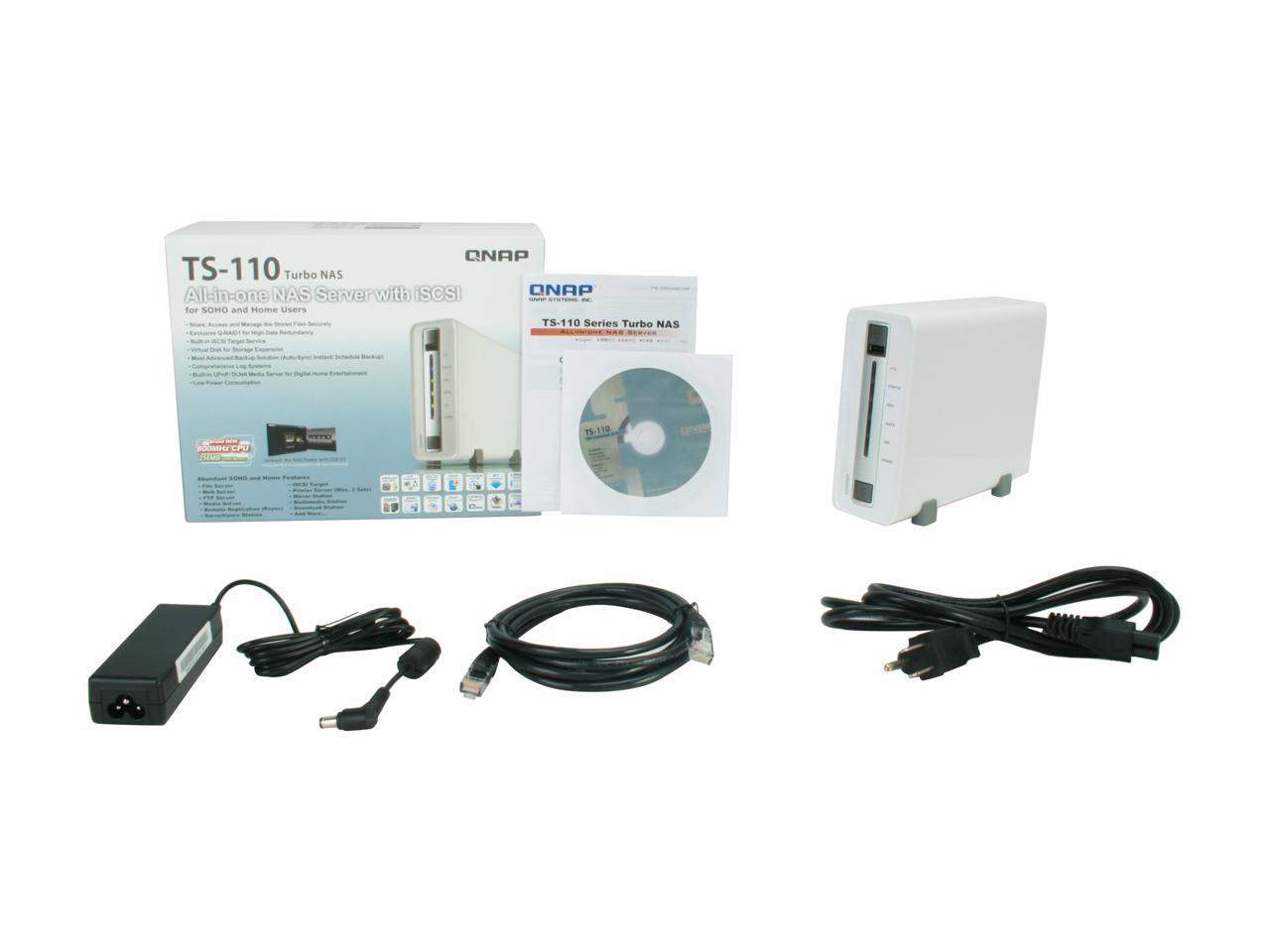 (11) Write a Review
OUT OF STOCK.
Overview
Specs
Reviews
The QNAP TS-110 Turbo NAS is the most economic single-drive storage solution for Prosumers and SOHO users who want a NAS with compelling features, solid performance, low power consumption and high reliability.
The TS-110 Turbo NAS is not only an ideal storage server but also an all-in-1 application server. You can easily store and share the files to Windows PCs, Mac, and Linux/Unix over the network. The built-in server features include Web Server (with PHP & MySQL supported), FTP Server, P2P Download Station, Surveillance Station (with monitoring & recording for up to 2 IP cameras supported), iTunes music sharing server, UPnP DLNA server (built-in TwonkyMedia) for multimedia files sharing, Printer Server, etc. with great storage capacity expandability over the network by VDD function. Managing the NAS is extremely easy. The AJAX-based graphic user interface allows intuitive management of all the Turbo NAS features.
Incorporating a Marvell 800MHz CPU and 256MB DDRII RAM, the power consumption of the TS-110 Turbo NAS in operation is only 7W which is much less than that of a PC. The TS-110 offers features more often found in much higher end NAS servers, including built-in iSCSI target service, policy-based unauthorized IP blocking, SNMP (Simple Network Management Protocol), remote replication, a Gigabit LAN port, and 3 USB ports (the front USB port includes an auto-copy feature).

Learn more about the Qnap TS-110-US

Pros: Great product at a great price! I set this up with a 2TB drive from Newegg and use it to store all of my family's photos, videos, movies and music. I have Squeezebox Server running on it and it easily feeds our two Squeezeboxes over a 10/100 network (wired and wifi). After setting it up I realized that I probably wanted it backed up so I purchased a 2TB iomega USB drive and was able to easily set up the NAS to back itself up every night. This NAS replaced an iomega Home Media Server NAS and it is so much better!

Overall Review: If you are looking for an affordable NAS for your home network I don't think you can beat a QNAP setup! Perhaps I should have considered the 2-bay system and setup a RAID but I'm happy with my setup with a USB drive backup. Great system and relatively easy to get up and running.

Cons: I don't like the Twonky media server too much. Its kind of a pain to set up.

Overall Review: Overall, this is really a fantastic product. It does everything i want it to do, and SO SO much more! I haven't even tried the Torrent downloader or the iTunes server or a few other applications. But they're next on the list. I also can't wait to use the one-touch thumb drive backup feature. You really can't beat this NAS for the price!

Pros: The setup and discovery process was extremely easy. The web interface is well done and very extensive. After transferring in my existing movies & music the setup for Twonky Media Server was very quick and operation is faultless so far. I have successfully streamed three different movies simultaneously to a wireless laptop, wired desktop, and wired game console without any skipping or dropouts so far.

Cons: Email notification seems buggy but its a known problem and is being worked on.

Overall Review: I love the product so far and it easily replaced a dedicated computer that was running Twonky server and an FTP server. The next task is to buy another unit and setup an off-site Rsync for redundancy and use as a media server at another location.

Cons: Actually haven't run into many yet. The administration system is initially complicated but only because of the amount of features and my unfamiliarity with some of them. The machine was up and sharing in less than 10 minutes though and I haven't touched it since.

Overall Review: Will be buying a RAID array version when I move. After looking a long time for a decent NAS solution this company appears to have nailed it head on. Would recommend to any family member for its ease of use and plentiful features.

Pros: I was tired of problems using USB drives for backup on my Linux servers. I require the volume to be encrypted. This iSCSI solution allows me to connect a volume and encrypt it. The most important part for me is that I can then take the drive out of the NAS server and place it in a desktop system to recover the encrypted data without the use of the NAS server. This allows me freedom from having a cold standby in case I have a problem with this QNAP device (years down the road).

Overall Review: In case you need to do this: You simply need to find the iscsi volume in the .@iscsi directory. Then run kpartx -a on the volume. Finally run that mapped partition through cryptsetup luksOpen on that mapped device. Then you may mount and (recover|use).

Pros: Big step up from the Buffalo NAS I had. The management tools are much slicker and I love the ability to put my own drives in there; the whole reason I switched from the Buffalo is I started to hear a rattling on the disk and after reading reviews thought I better get stuff off quick.

Pros: Very reliable, easy to set up, gigabit ethernet, many features. I bought this to replace a Linksys NSLU2 that I used with 2 attached USB drives for backup from the households numerous computers. I added an internal 1TB drive. The combination works well as a backup server. You can also attach an external drive to the USB port and set up an automated backup of your backup (talk about being careful). It has a number of included applications such as multimedia server, web server, torent support, etc. I have only extensively used the web file manager (externally through DMZ on my router), and the web server. It provides support for dynamic DNS updating.

Cons: The multimedia support (Twonky) is a little complex but I haven't put any time into working it yet.

Overall Review: With the gigabit network and an internal drive (vs USB), this does backups much faster than the old slug arrangement.

Pros: Low power consumption Quiet Lots of features Cheap for what it is

Overall Review: This machine is an amazing product for the price. It can do so many things...but it's not Time Machine compatible and although there are workarounds, in the end it just wasn't worth training my client about it.