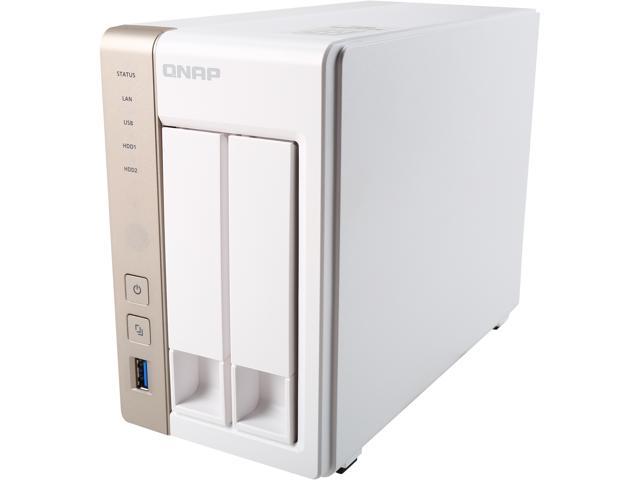 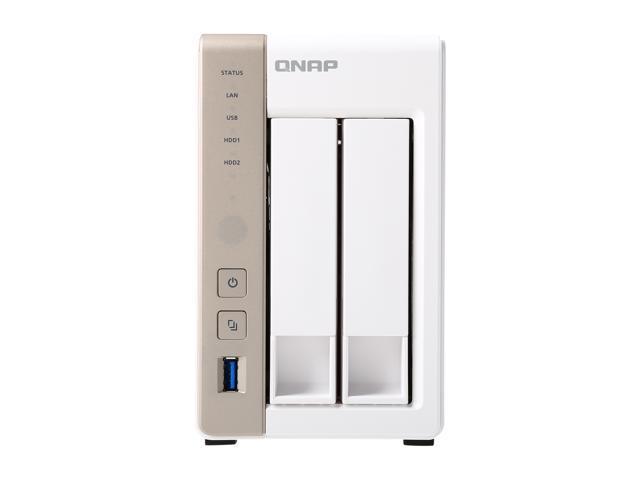 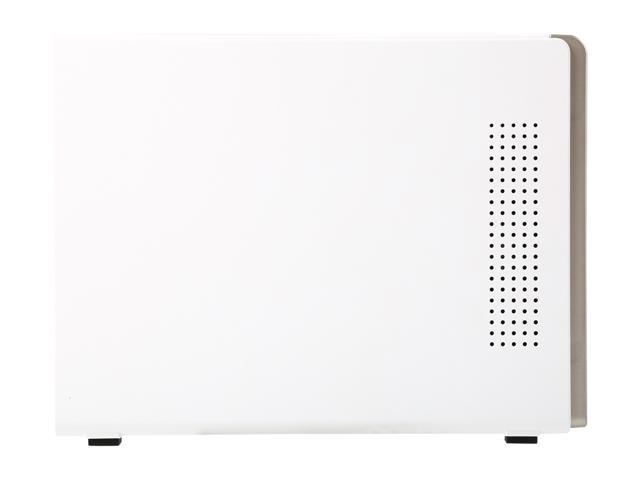 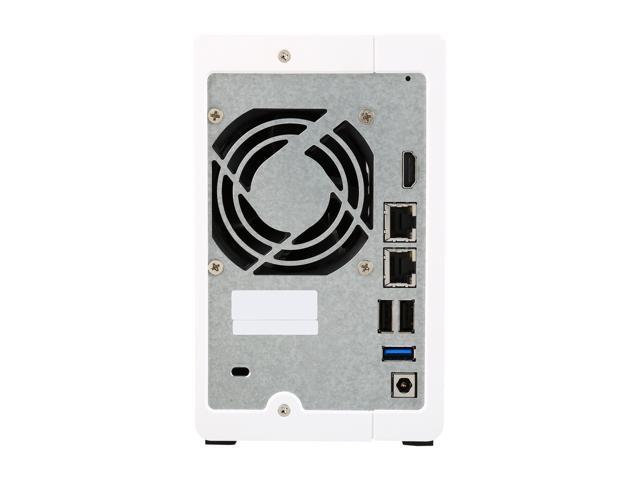 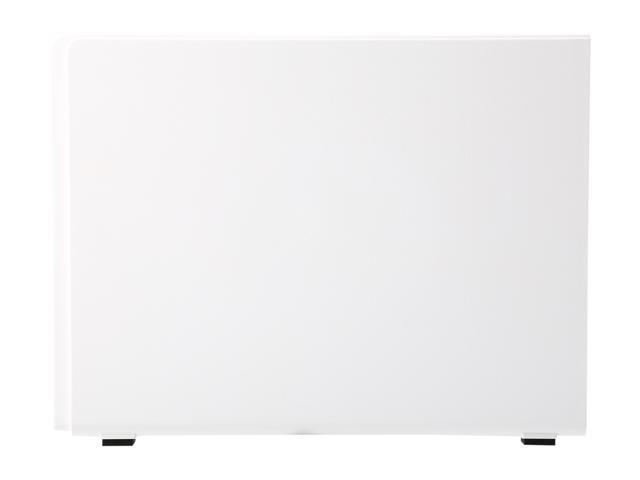 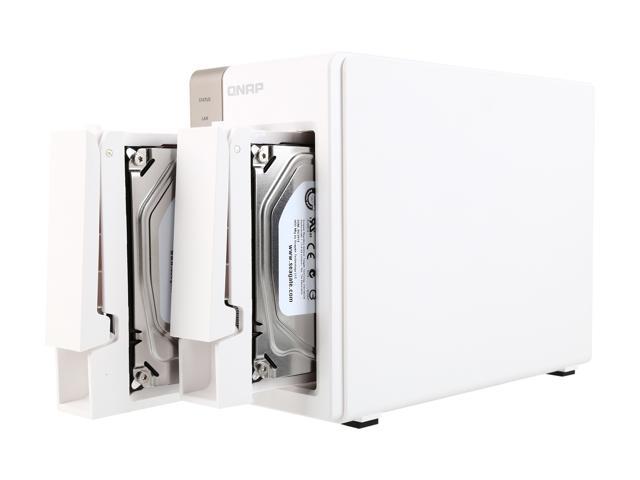 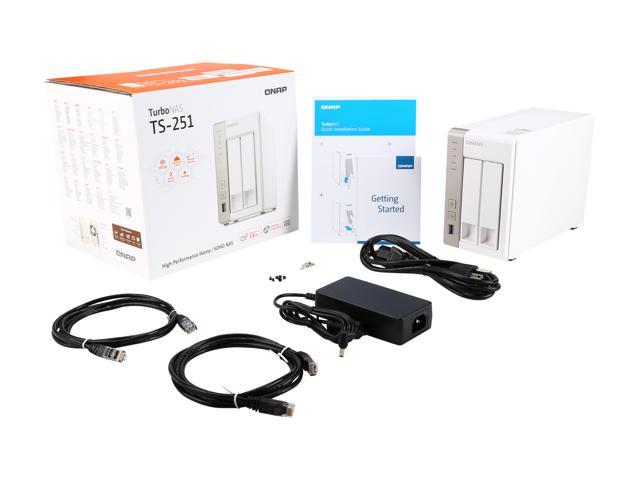 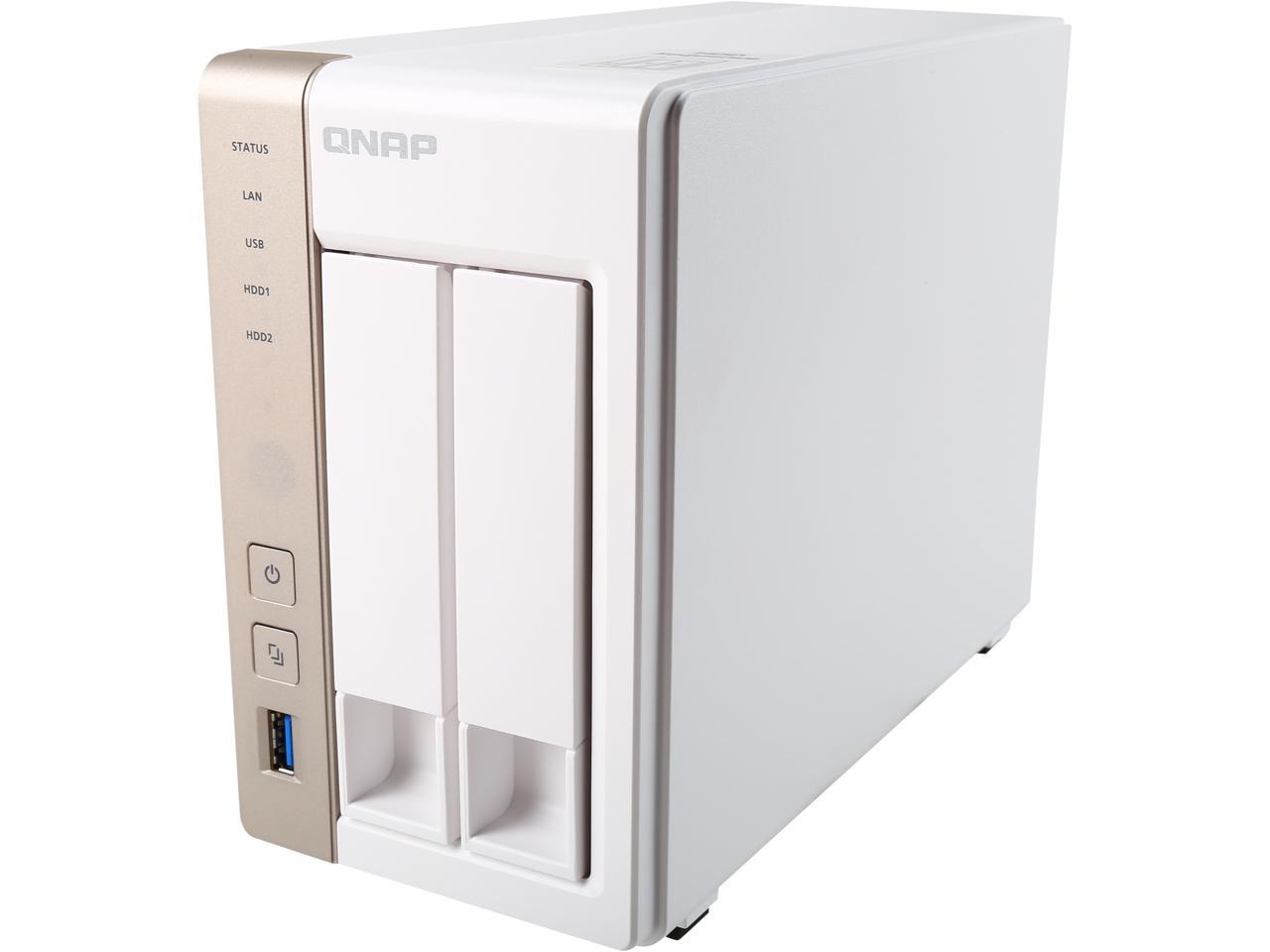 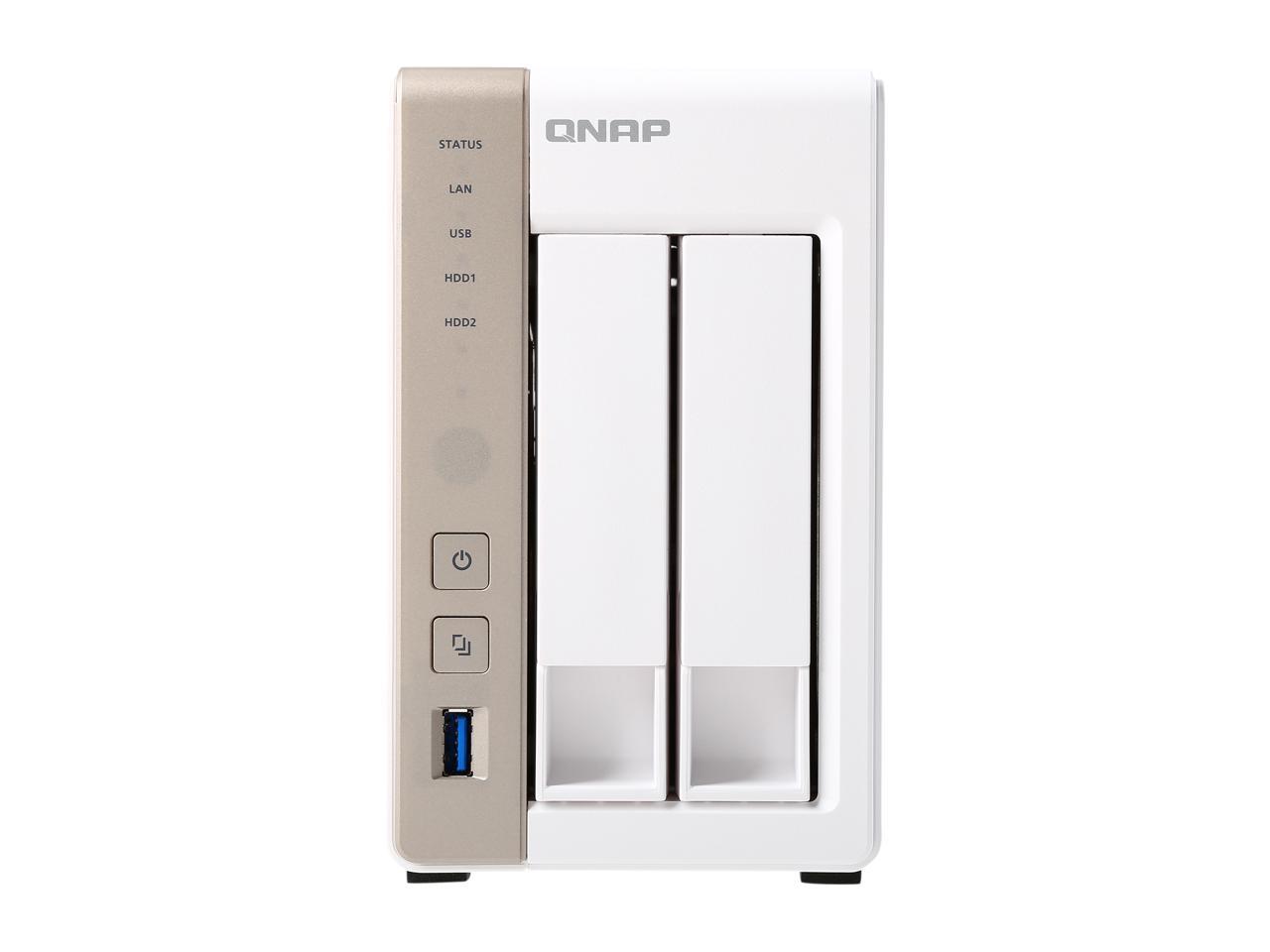 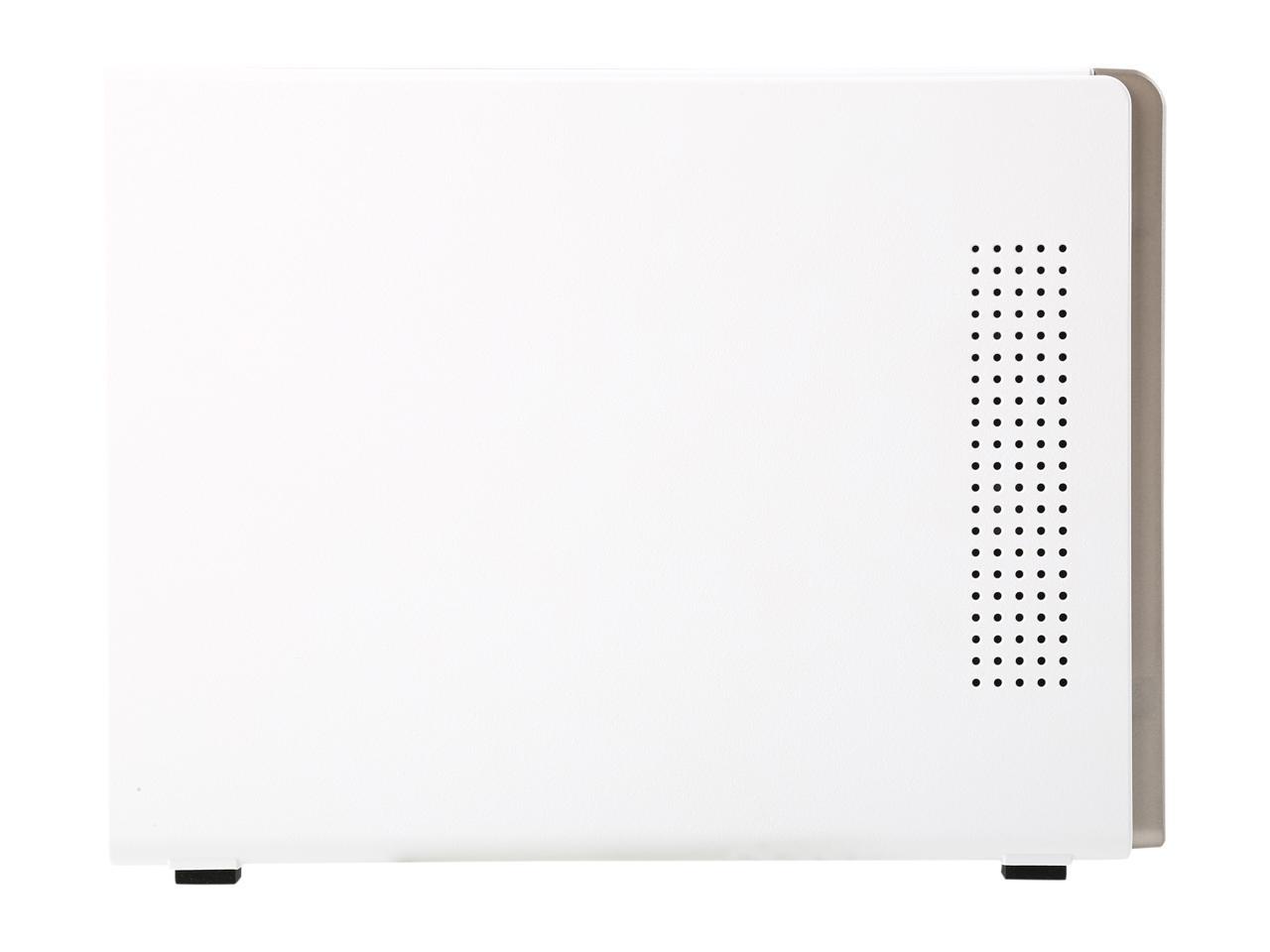 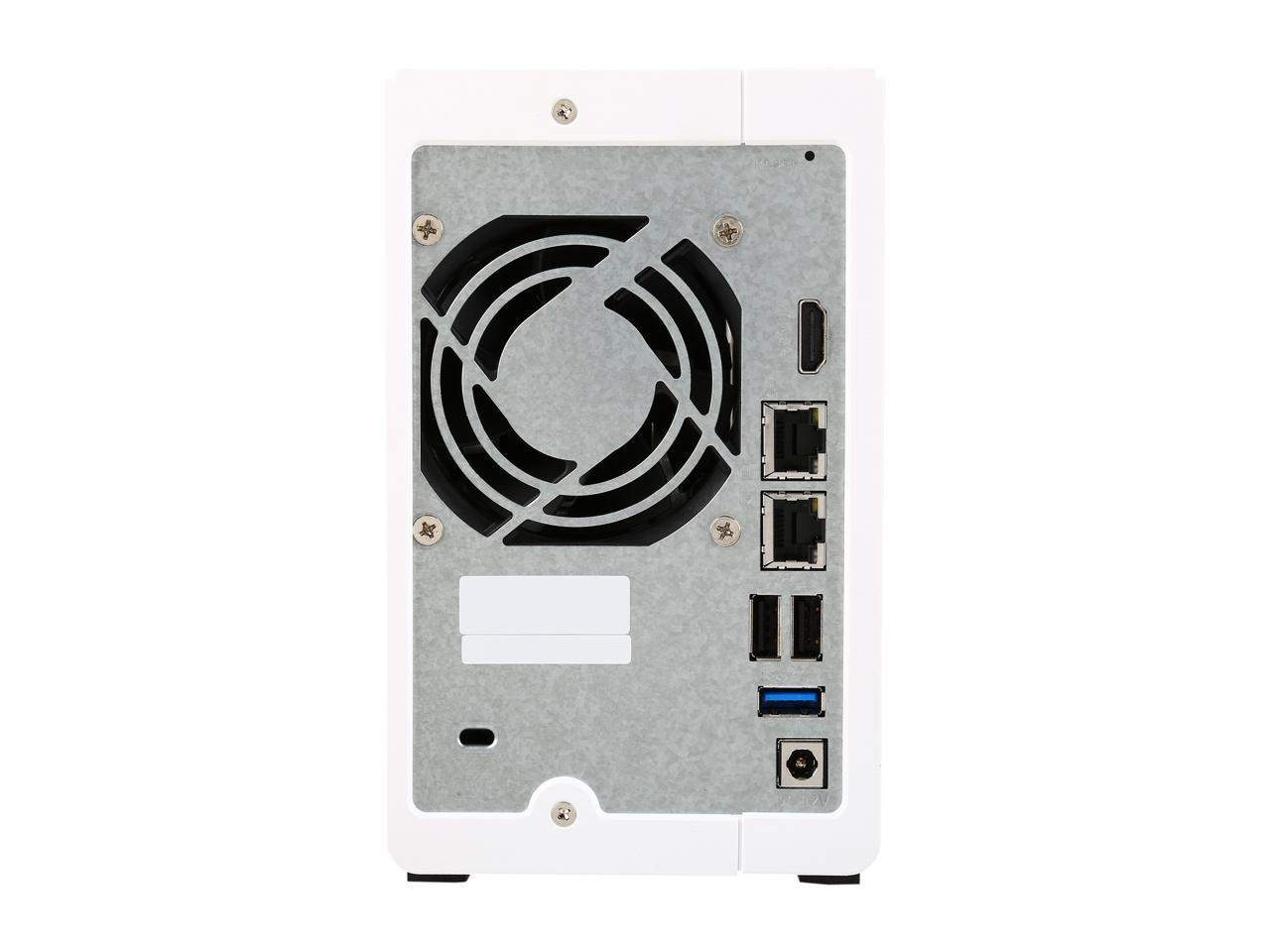 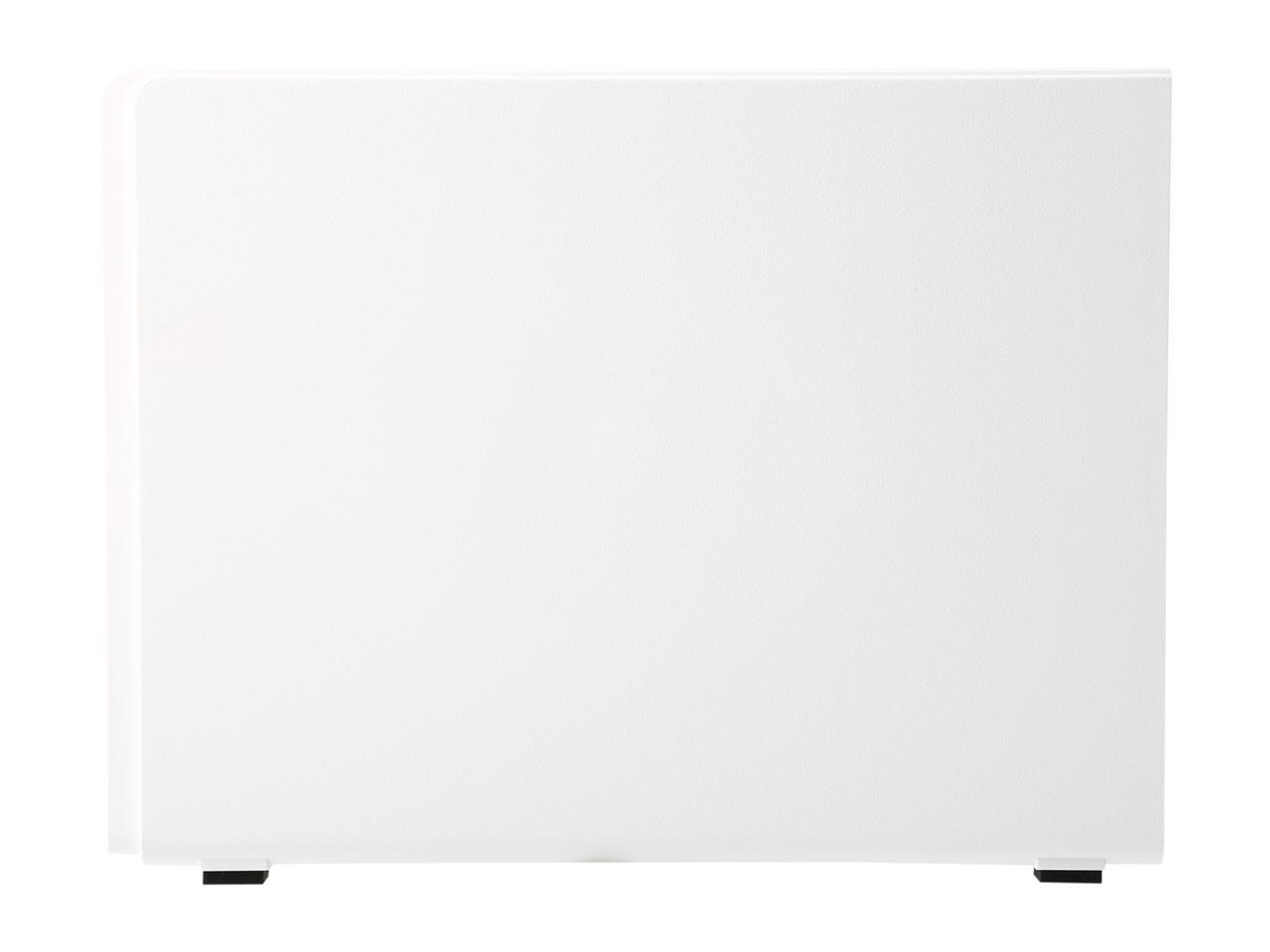 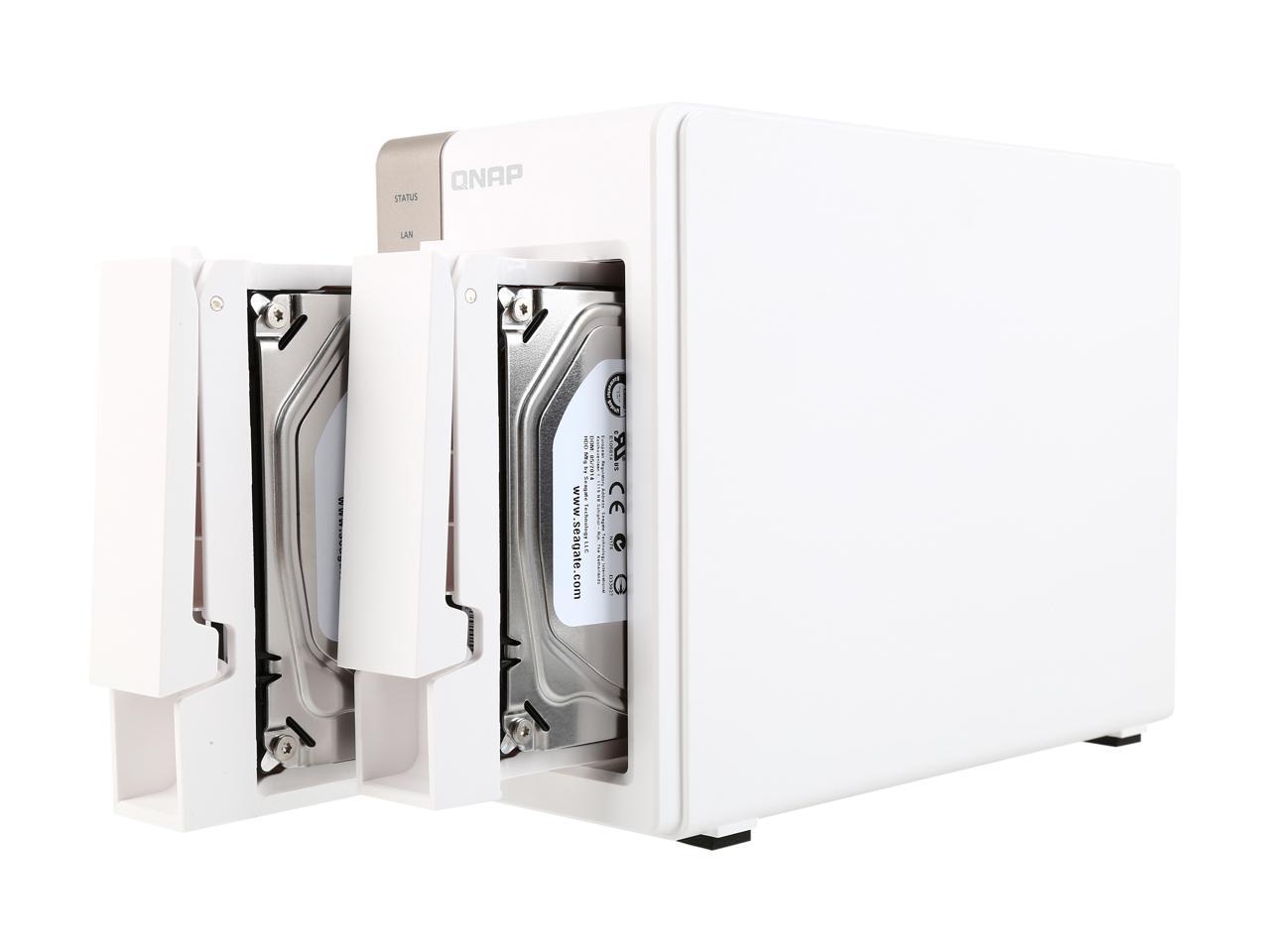 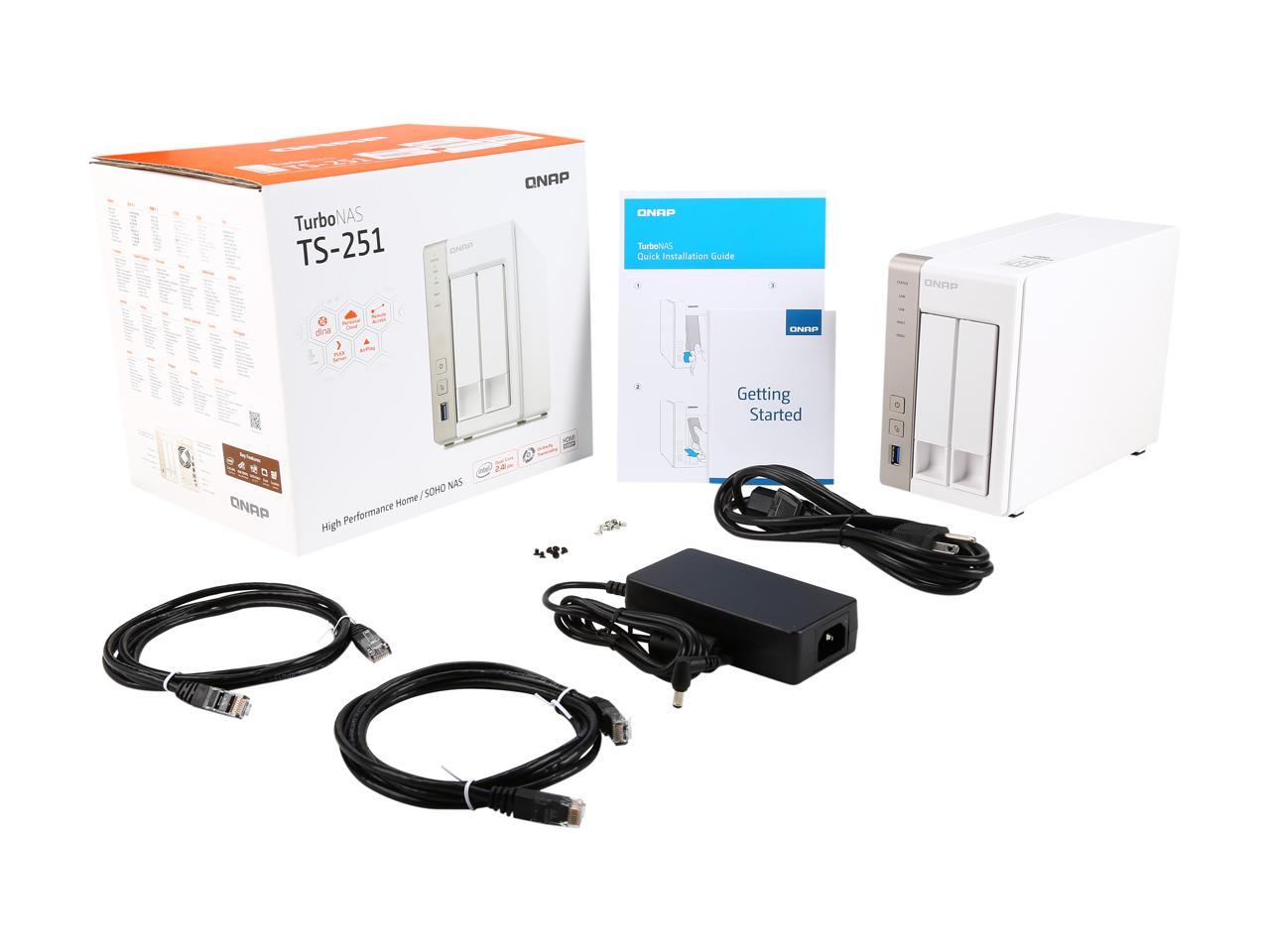 Pros: This is my second QNAP. My main NAS is a QNAP TS-459 Pro + which I have had for a few years. It backs up automatically to my new TS-251. I upgraded the TS-251 with 8 GB of GSkill memory (details in other thoughts) and run the TS-251 as a NAS and Media Server through Kodi. The TS-251 was far cheaper but boots faster than my older QNAP. Transfer speeds are excellent between the two systems. There is never a lag when watching movies. The QNAP web interface takes some getting used to but is very logically laid out.

Cons: Not really a con but this QNAP has two bays. I am running the TS-251 with two 3 TB in RAID 0 so if one drive fails all data is lost. I am OK with this as I depend on my TS-459 which is in RAID5 as my main storage.

Overall Review: Based on recommendations from other posts I upgraded the memory to 8 GM. The maximum memory is 8 GB although I have read others have gone up to 16 GB. The QNAP operating system is very efficient and with 8 GB the system at idle is using 9%. Memory I used: G.SKILL Ripjaws Series 8GB (2 x 4GB) 204-Pin DDR3 SO-DIMM DDR3L 1600 (PC3L 12800) Laptop Memory Model F3-1600C11D-8GRSL

Pros: I have a WD My cloud (cheap and pretty good NAS) and I have 2 Seagate Black Armour NAS 4bay (really hate them both). And then I came across the new line from Qnap and the TS-251/451 series NAS and I suddenly realised that they others are obsolete. Between the ability to upgrade the RAM for $30-50 for 8gb of ram and all the amazing apps included at the touch of one button...... Its stupid to consider any other NAS imho. I was lucky enough to come across an open box TS-251 here on NewEgg for half the original cost and, i'm just guessing its the 1 egg rating down bellow, (so thanks)! I put 4gb of RAM in it and 2- 4tb WD reds in it, and its amazing. Originally I got it because I run a Plex media server with about 2tb of media in every resolution and file format you could imagine off of a built windows rig, but now my NAS does it just as good if not better. I have it transcoding everything flawlessly to every device I have. Even my little brother 2,000 miles away can stream at full resolution while 3 or 4 other people are also streaming at the same time. I'm just now getting into the surveillance apps to record my IP cams, and yes its working perfect. It even did most of the port forwarding for me, yet I had to manually set it up on my 2 other brand NAS setups. So that was another huge plus. I even used different ports on the Qnap.

Overall Review: Just buy the Qnap TS-*51 series in the 2 or 4 bay and dont look back, and you can thank me later.

Pros: Pretty good performance, installation is easy and good price! Newegg always has never failed me ever in terms of deals.

Cons: Cheaper build, (I like the white) but would rather have it in a steel casing or some sort.

Overall Review: I see lots of buzz and promotions on the new virtualization features on QNAP’s new NAS all over their website, but I don’t think 51 series does well with it. (The company recommends the NAS to have more than 1GB to actually perform VMs on the NAS) I bought the 1GB version, so the NAS probably cannot handle the tasks. Anyways, the overall NAS is very powerful (for home use). I did not try out the HD station yet, but because my NAS is placed nowhere near the TV.. I try to use other options. Now, to stream videos and movies I use Plex, and to be honest the stream is flawless. I barely have any streaming problems with Plex with the QNAP so that’s a plus! A tip for better streaming off your smartphone devices. I encountered some problems while selecting “transcode” from Qfile( a QNAP app for users to view and see the files) and I found that my movies were so choppy. So I called the tech support, and they said to enable transcoding, you have to go to HD station app from the GUI, and enable and install the Codex Pack to ensure the best transcoding experience. ( The 51 series was known for its great transcoding speeds both offline and online) so.. I think for those who are experiencing the same as I did, you got to enable and download the apps from HD Station icon from the OS. Overall I think the NAS is great for its value! I would prefer a more powerful NAS such as the 53Pro to enjoy some virtualization features.. but it’s fine.

Cons: It failed in less than 2 months. This was disappointing.

Overall Review: Have a TS-453 and the TS-251 was bought to become an offsite backup. Rsync was a breeze to setup.

7 out of 7 people found this review helpful. Did you?
Manufacturer Response:
Dear Randy K. Sorry to hear about what you are currently experiencing with our TS-251, as this is not the intended or typical experience with the device. We will work closely with newegg team to provide you better shopping and product experience For your case, after 30 days of purchase, please contact QNAP technical support directly we will arrange a new unit for you If our support team can be of any assistance to you, please contact us via email or phone below and reference this Newegg review. (909) 595-2782 http://www.qnap.com/i/useng/about/con_show.php?op=showone&cid=1
Anonymous
Ownership: 1 week to 1 month
Verified Owner
Sufficient Horsepower6/3/2015 9:00:38 AM

Pros: I purchased this NAS with Plex being nearly the only motivator. I was running Plex off of my gaming rig which was less than power efficient. I was a little concerned, based on what I read, that it wouldn't have enough computing power to perform the on-the-fly transcoding that makes Plex streaming work so well. I ordered the model with 1GB of ram because I knew I had a 4GB stick laying around. The upgrade was very easy! Just a simple screwdriver will do the trick. So at first I thought it was incredibly slow (specifically Plex). Once the NAS had finished downloading all the metadata it sped up dramatically! Since then everything has been really smooth, including transcoding. Also, the NAS automatically configured all port forwarding on my router/modem. Overall this thing has been well worth the money!

Cons: I really would have liked to see toolless hard drive installation. I also would like to see a better UI while utilizing the video output vise just the multimedia view. I would like to see the same sort of interface that is used in the browser without having to open Chrome.

Overall Review: This is the 2nd QNAP NAS I've owned (the 1st is a TS-410 that's still in use). This one, like the 1st, is proving to be another great product from QNAP with rock solid reliability. I use both units as NVR's with two cameras hung off each. With services duplicated on both units I can easily max out the older unit's CPU resources by scheduling a scan job, but this new one's CPU utilization can barely be dented no matter what I throw at it, it's very fast. I haven't tried the HDstation yet but looking forward to exploring this feature.

Cons: There is a large number of available apps, but you really have to scour the net to see which are useful to you, and which you can forgo. The App center doesn't have very good descriptions or docs. It takes a while to figure out what default options that come turned on, can be turned off without effecting anything. (I do NOT want remote access, if it's available via the internet, it will be hacked!) . And how to configure best for your use. The available docs for the product are rather rudimentary.

Overall Review: I easily stream 780p video, transcoding for subtitles on the fly, using Plex and the default 1GB of RAM to my Roku. The Plex Plugins for streaming work tolerably. I think that may require a memory upgrade to work without the occasional choppy video. Copy rates avg 58-60 mbps over LAN using Raid 1 and two 4TB WD Red drives This has easily replaced my older PC that was being used for file backup and a plex server, and just in time too. My secondary non-raid network drive that I use as my backup died after 3 years (I'm looking at you Seagate), and now I can breathe easier with a dedicated Raid-1 for all those photo's and videos.

Pros: This little NAS box makes for a fine HTPC. Its canned web based UI is much easier to manage than a Windows based HTPC. Comes with XBMC, and you can easily add a Plex server. Don't bother adding memory unless you are sure you want to run a VM. The extra memory I added never gets used. Works great with my Harmony One remote control. They have been keeping up with security patches for OpenSSL.

Cons: No serious cons. Pretty much have to use the version of XBMC (now called Kodi) that is offered by Qnap. Just hope they continue updating it. Takes some time to dial-in the system for convenient remote control as sometimes you still have to resort to a keyboard and mouse, I would recommend a wireless KB and mouse. Plastic drive bays feel cheap, and dictate handling with care.

Overall Review: I would recommend this NAS without hesitation. If you can afford the 4 bay version, get that one for RAID 5.