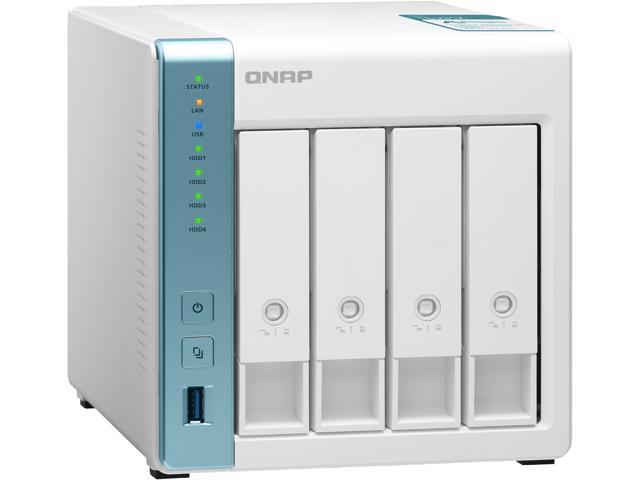 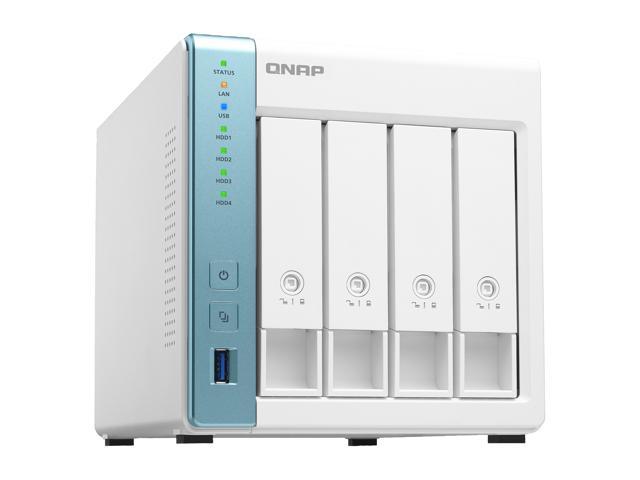 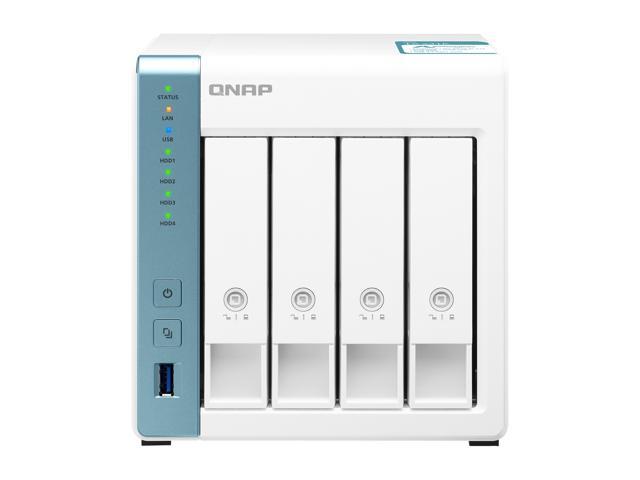 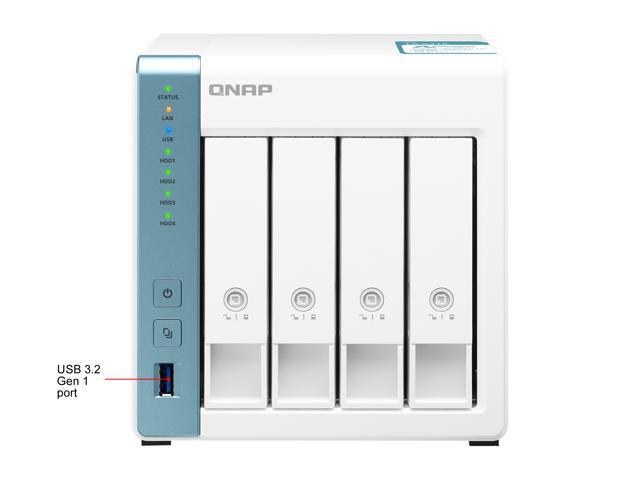 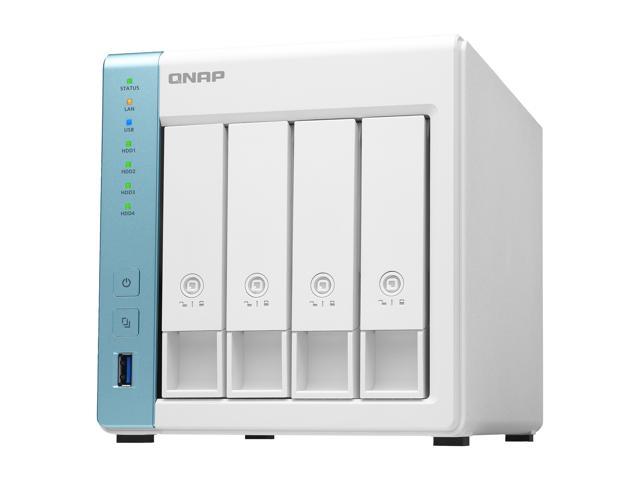 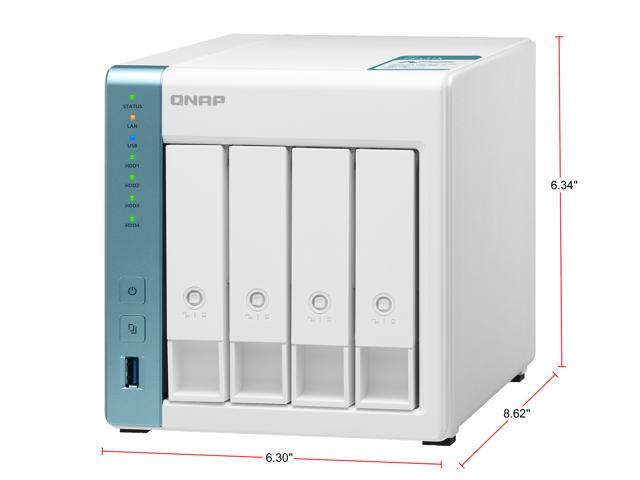 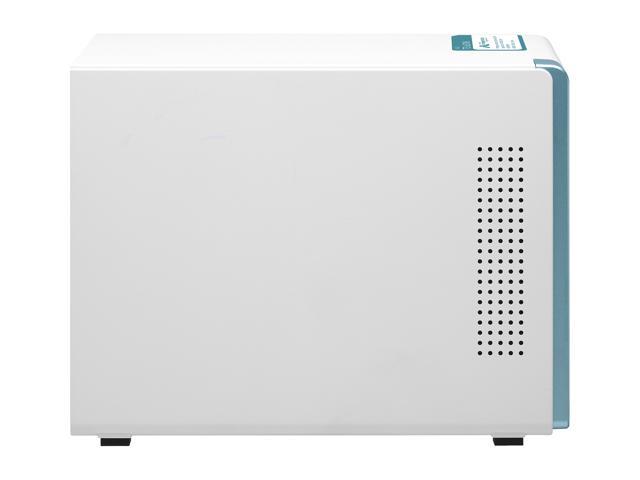 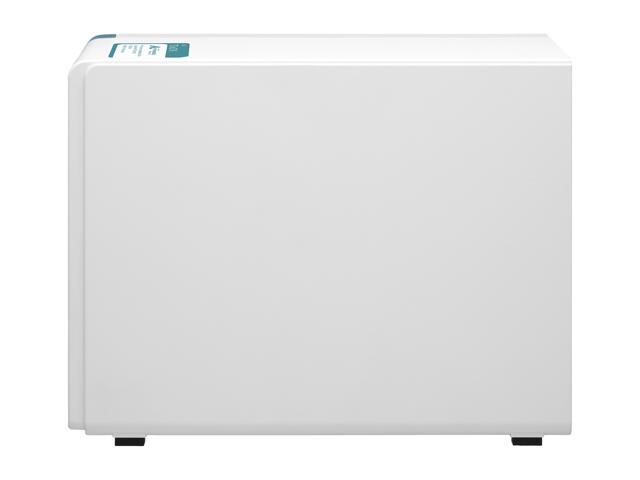 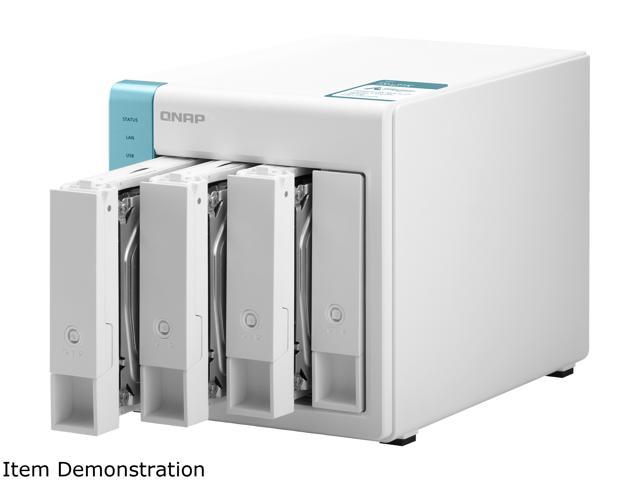 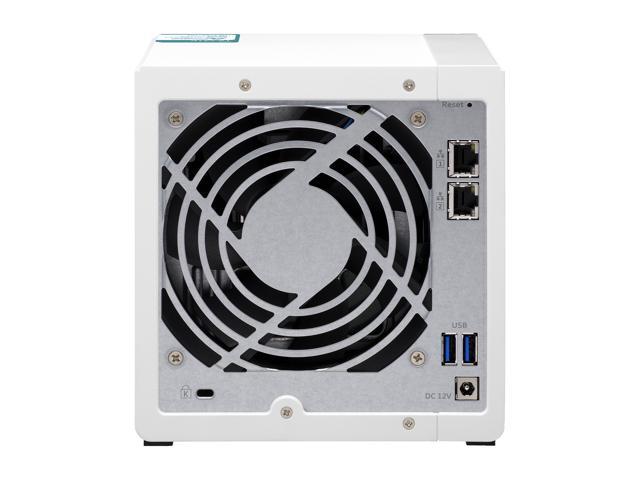 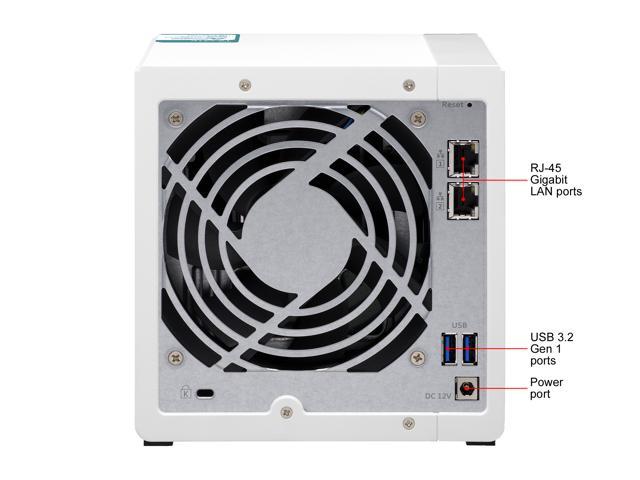 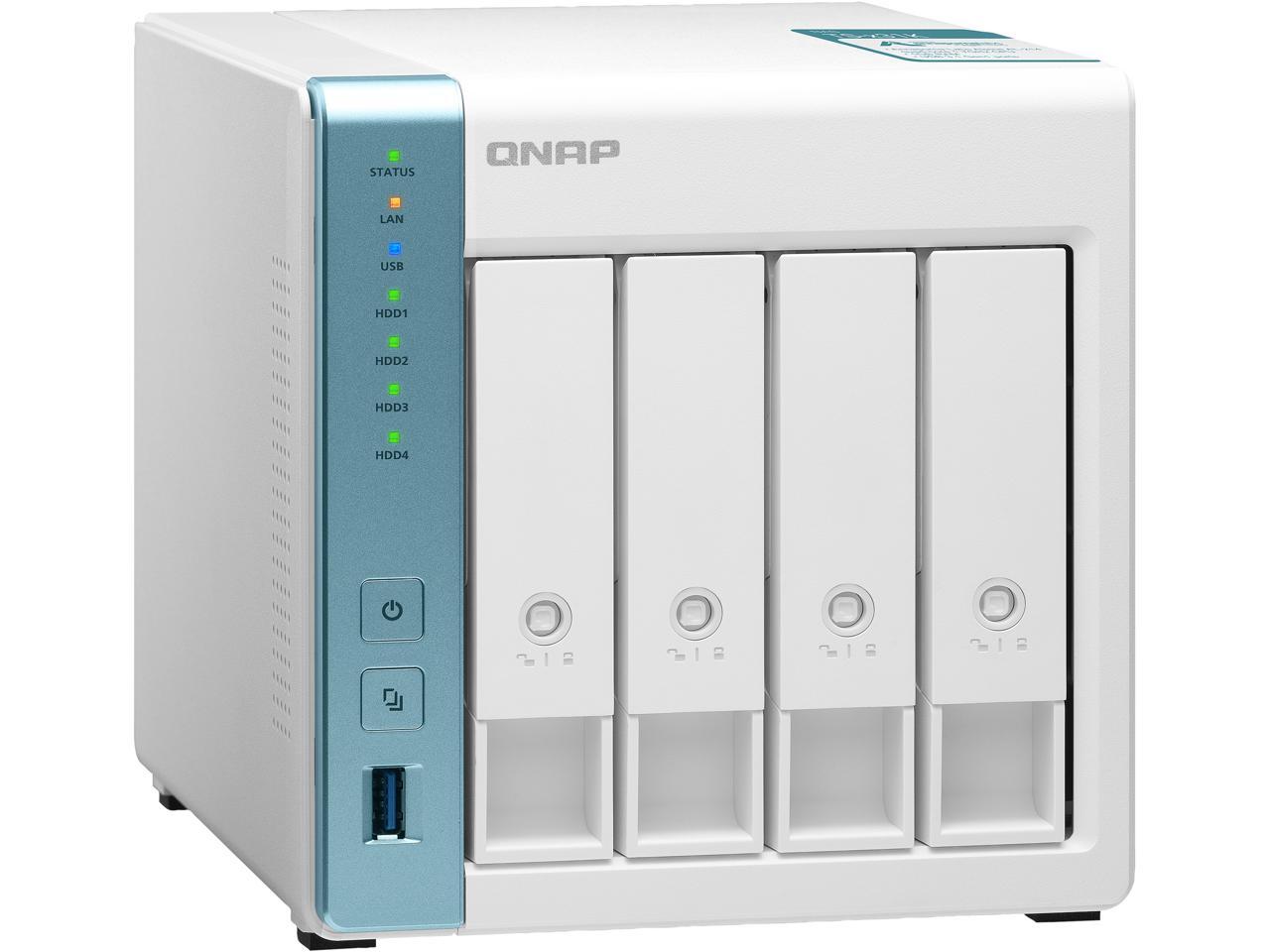 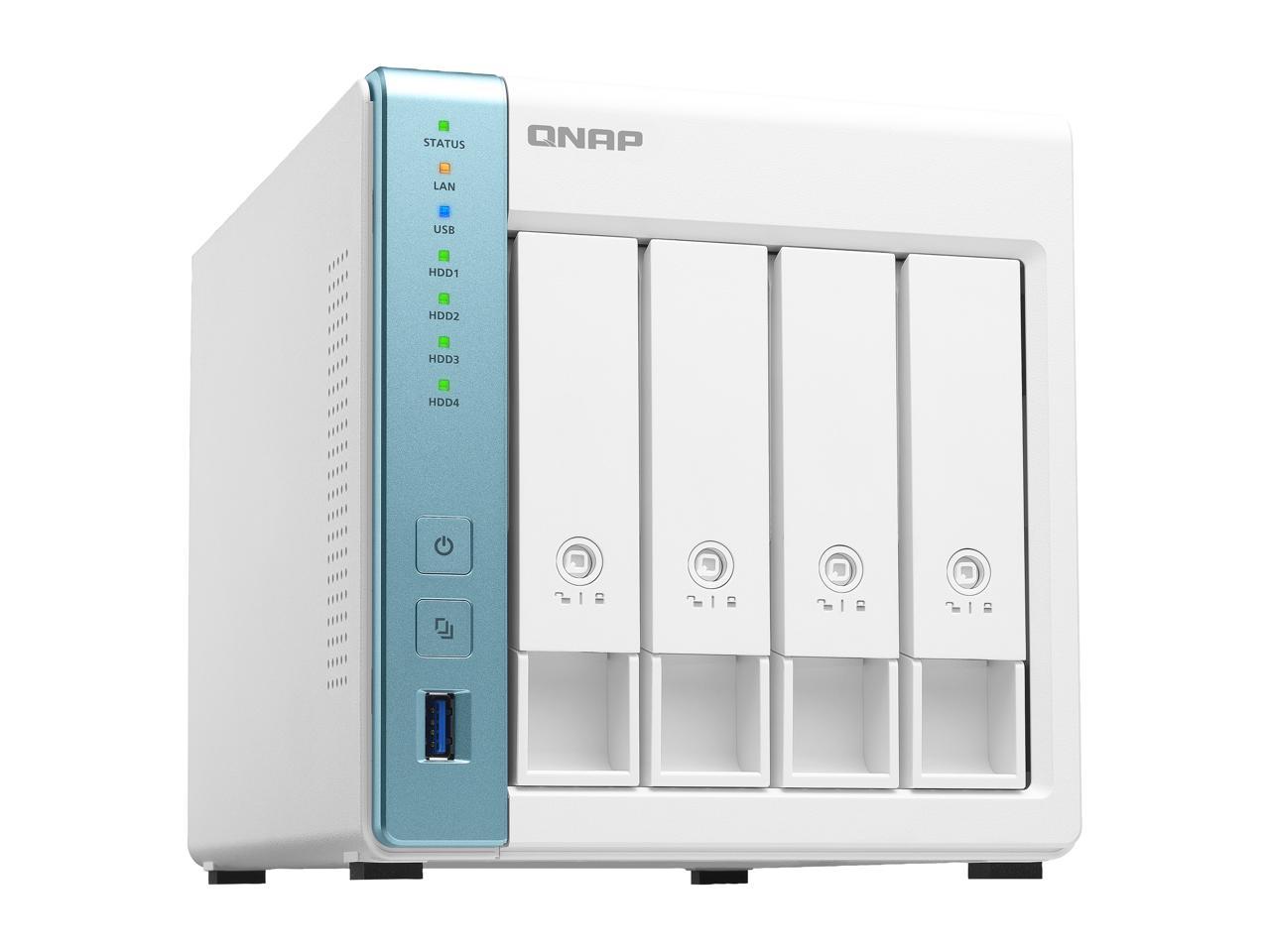 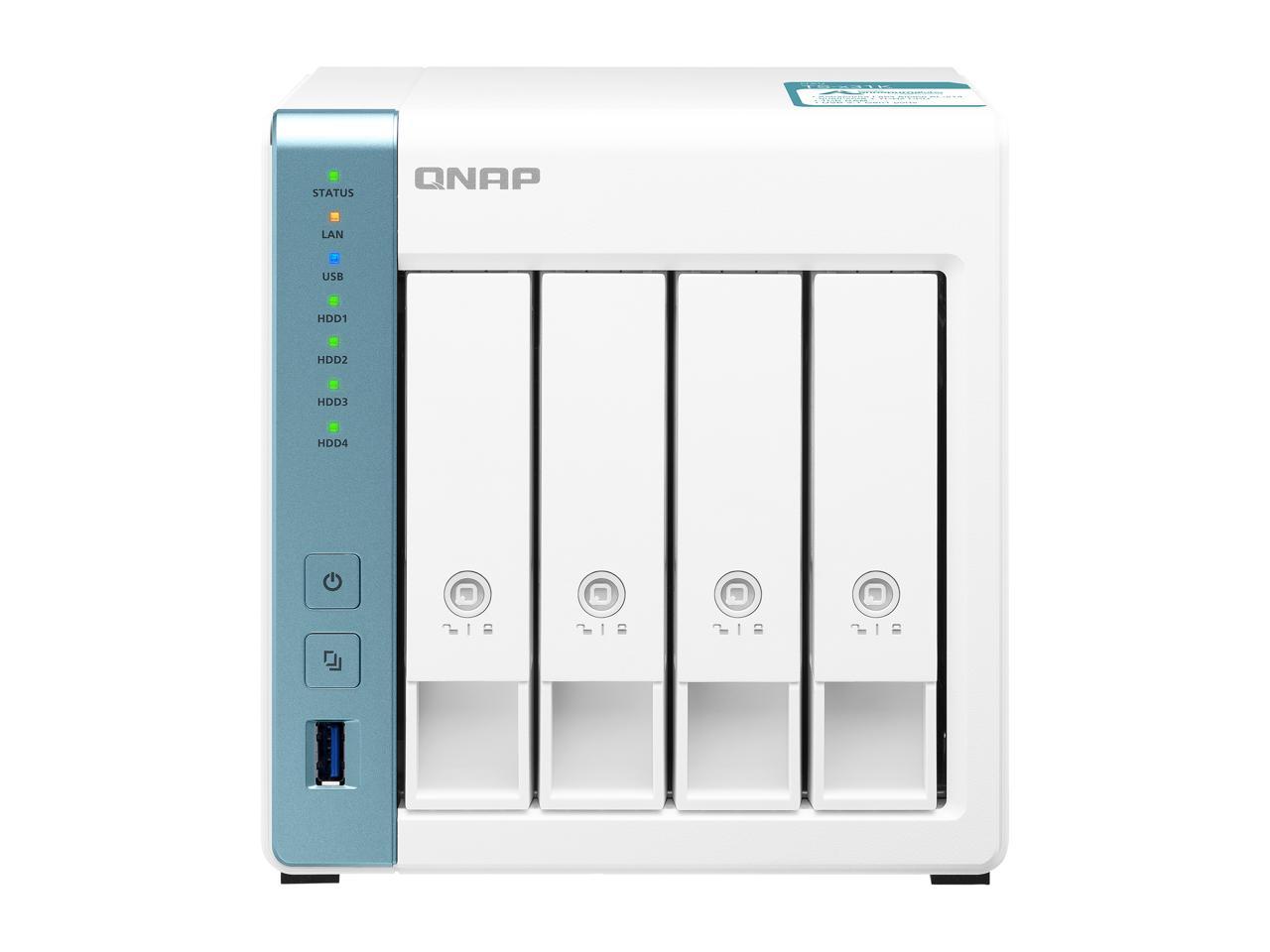 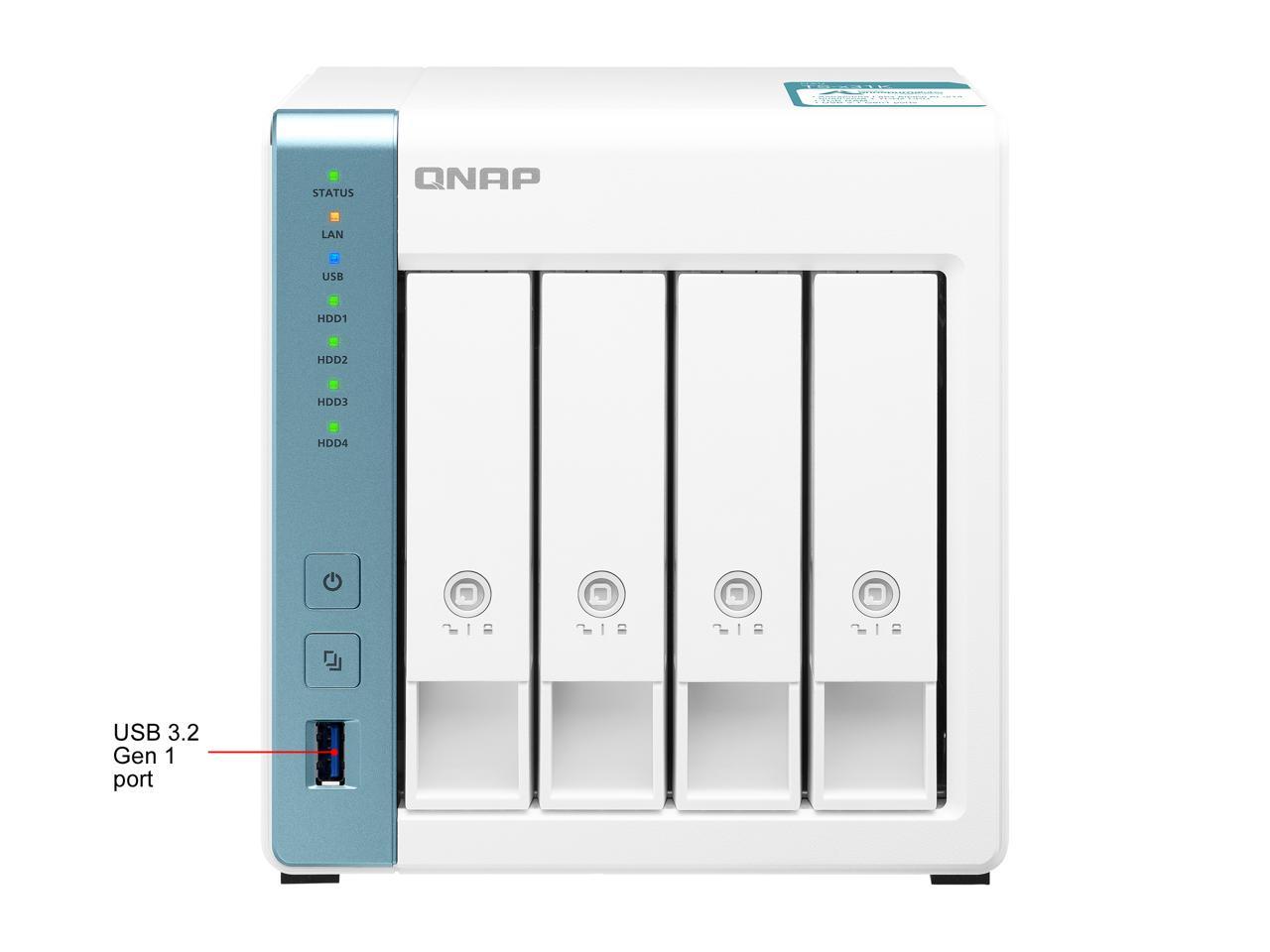 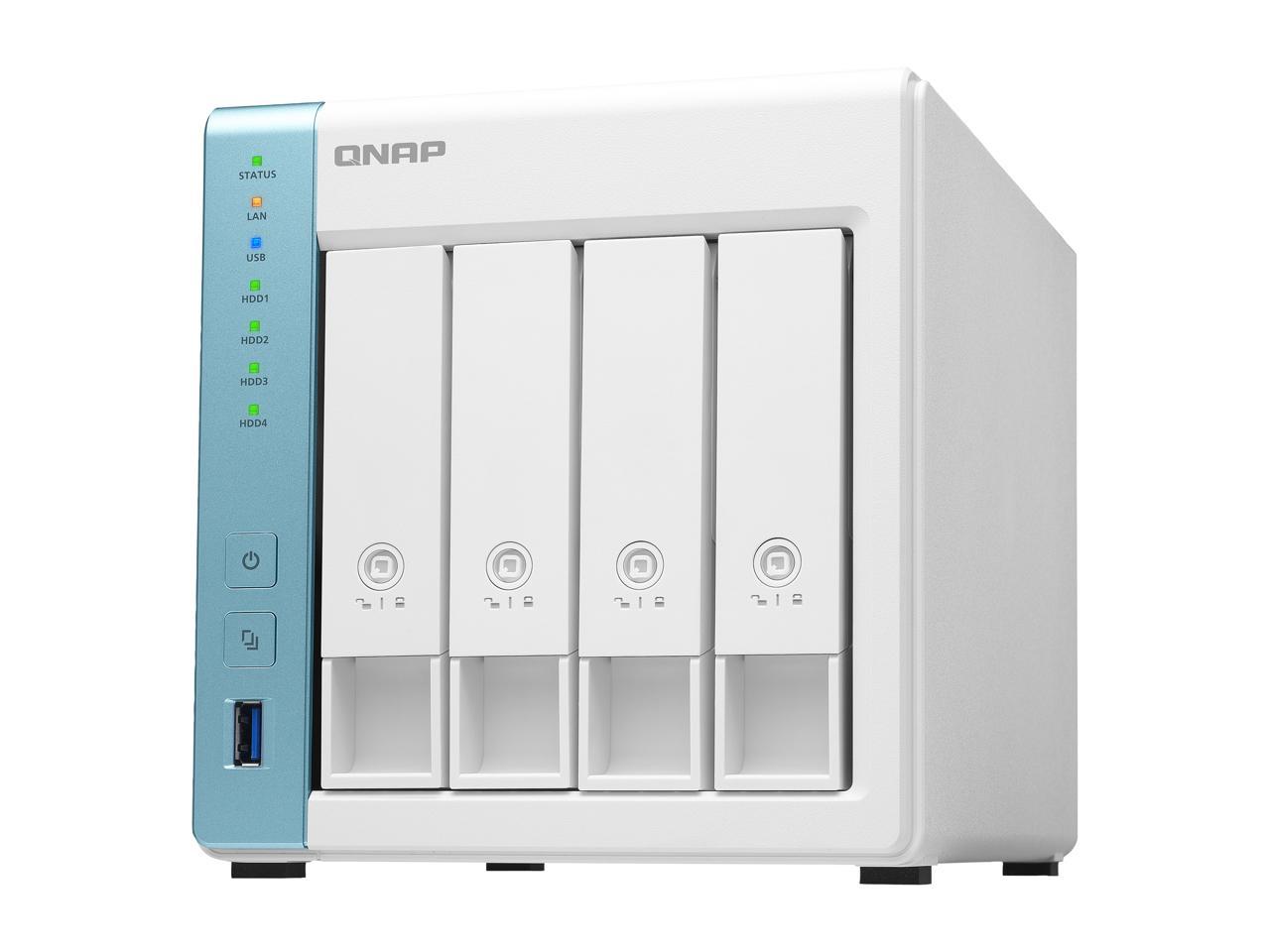 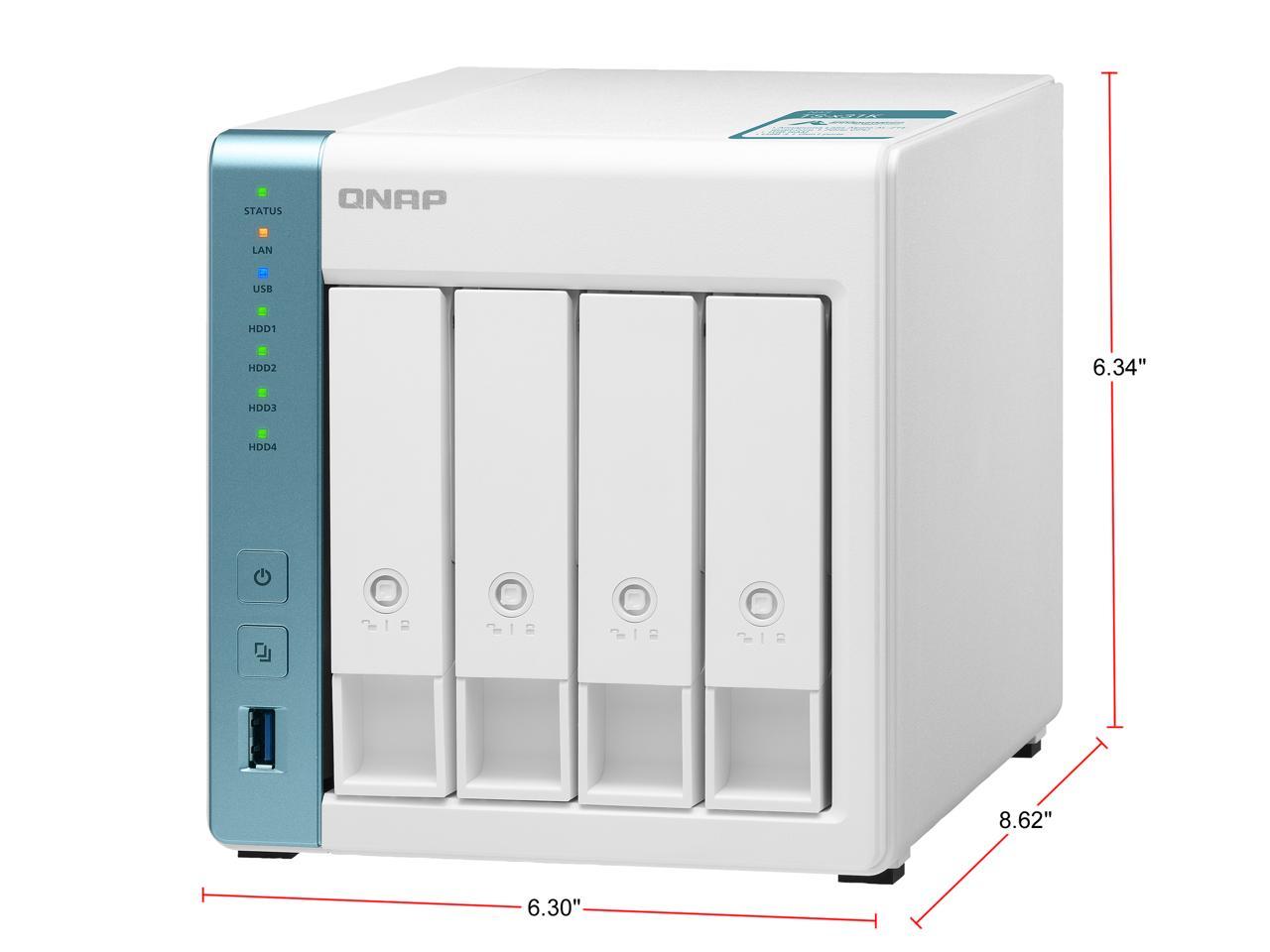 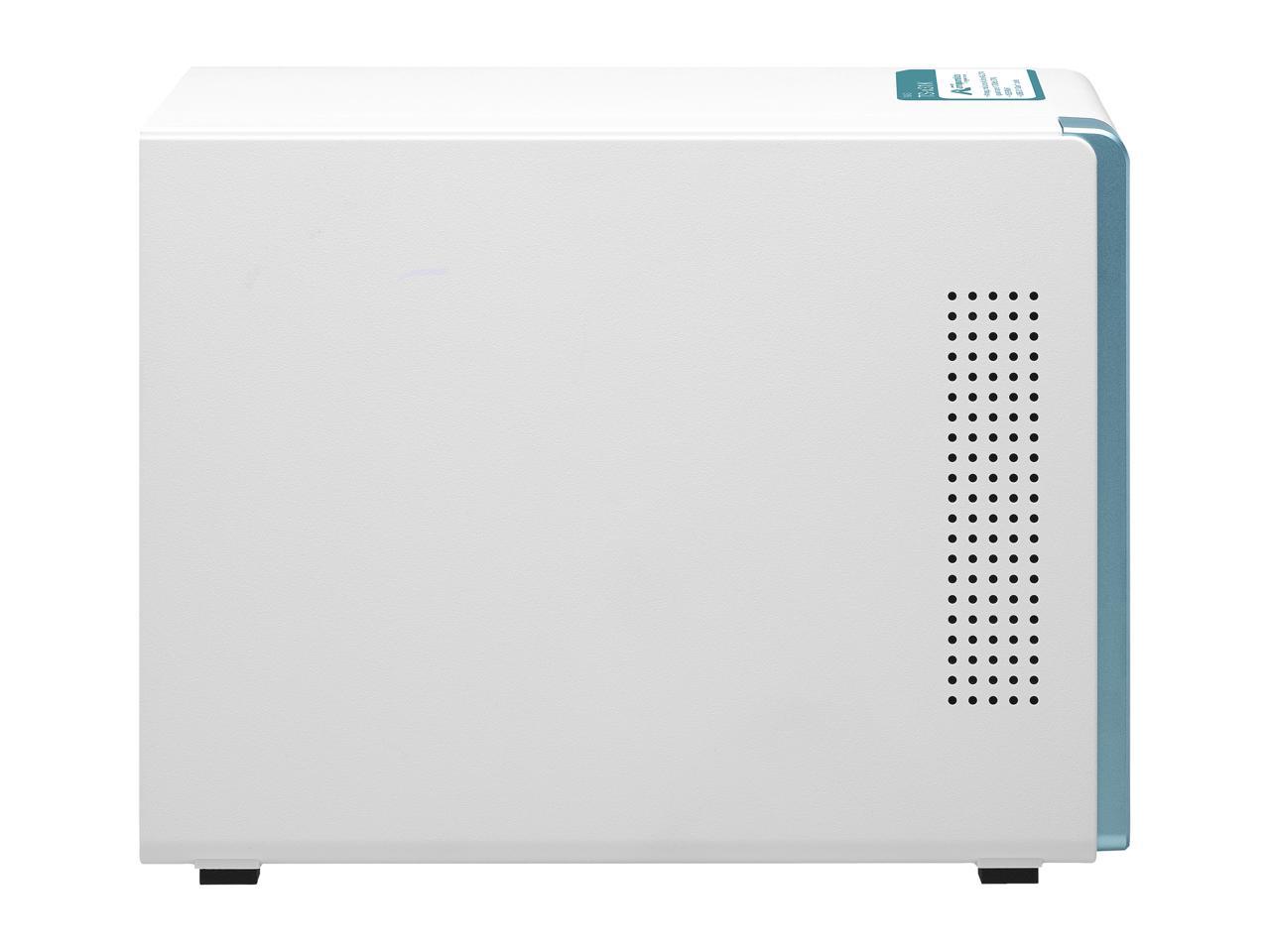 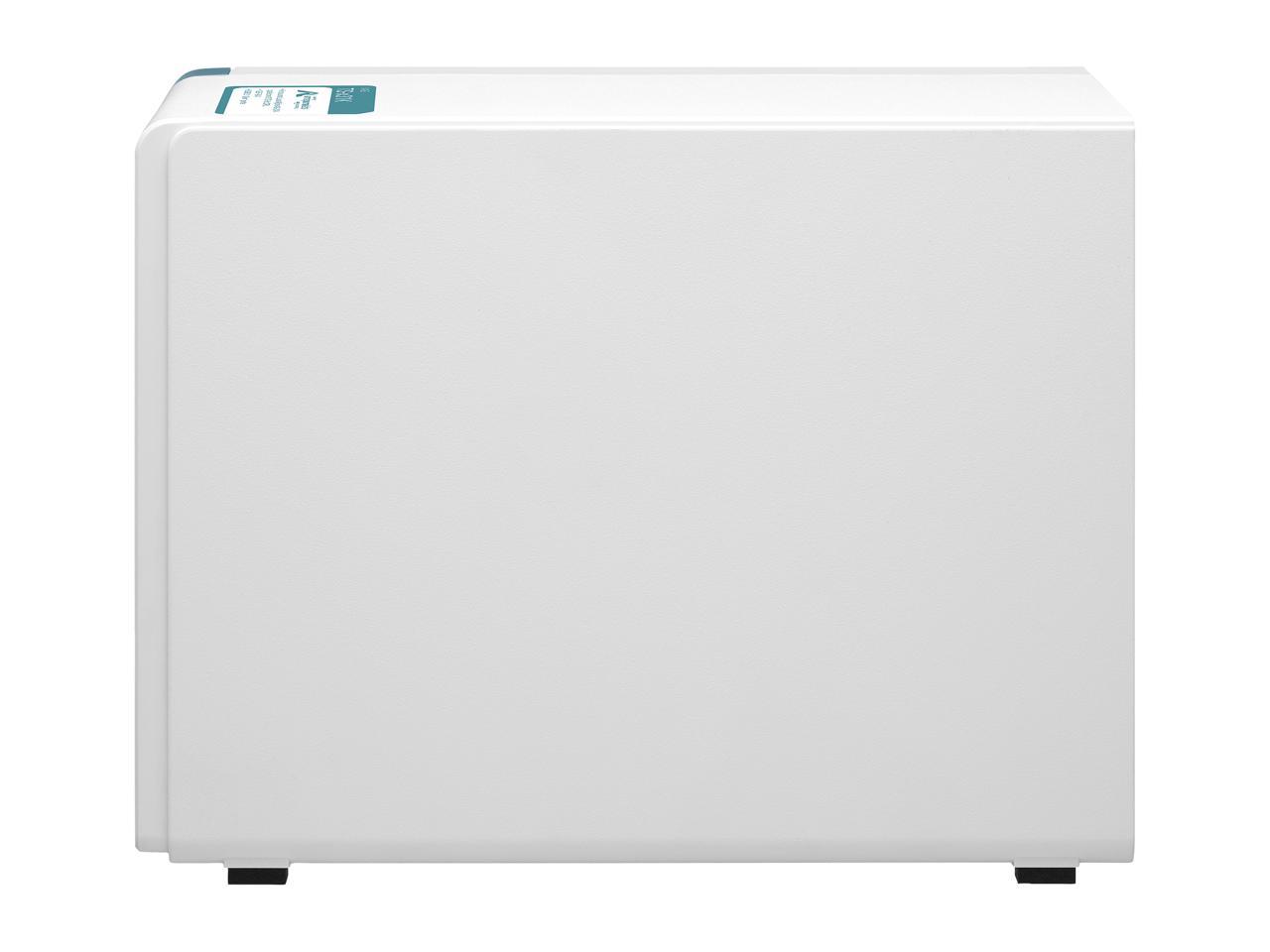 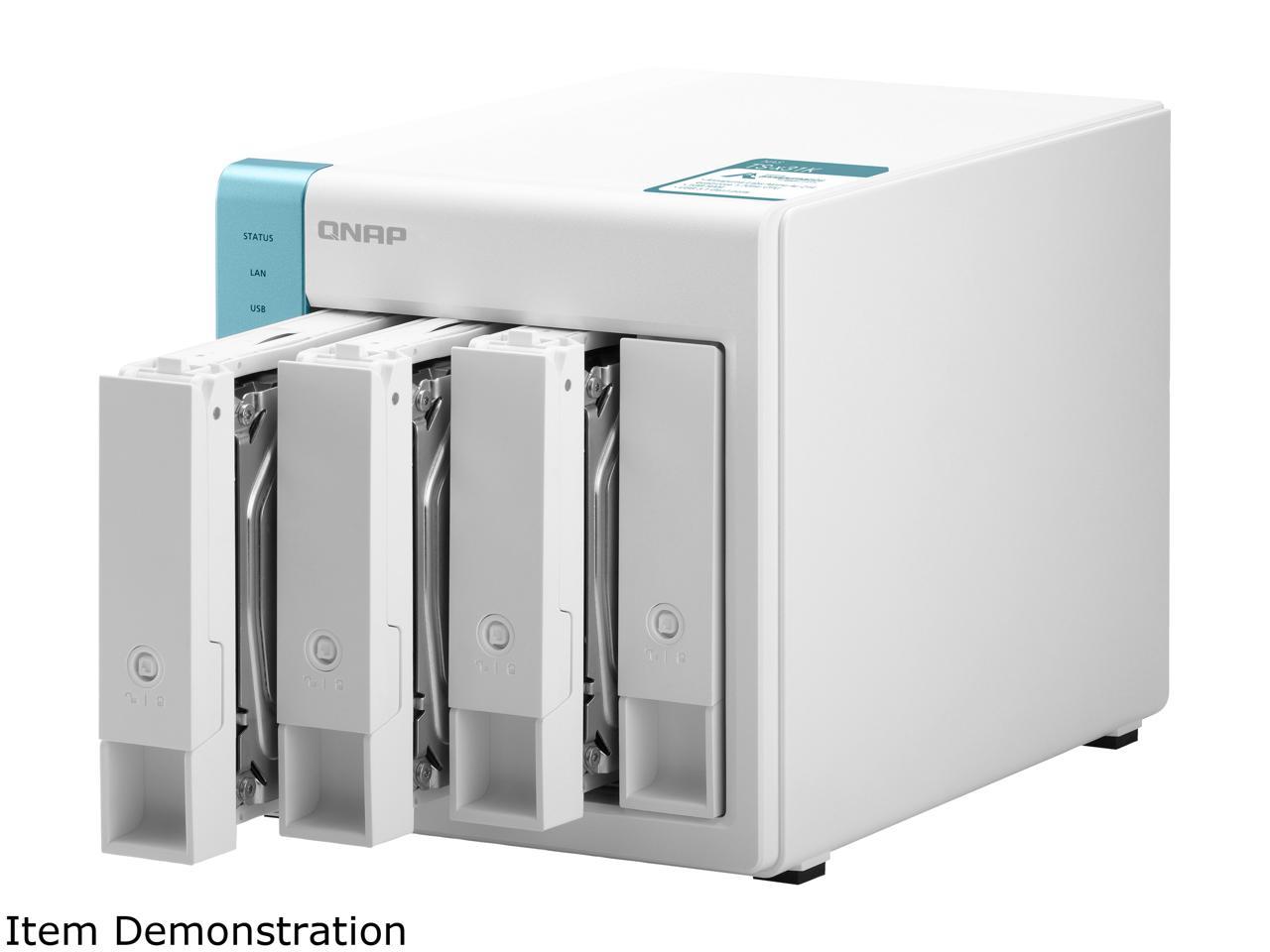 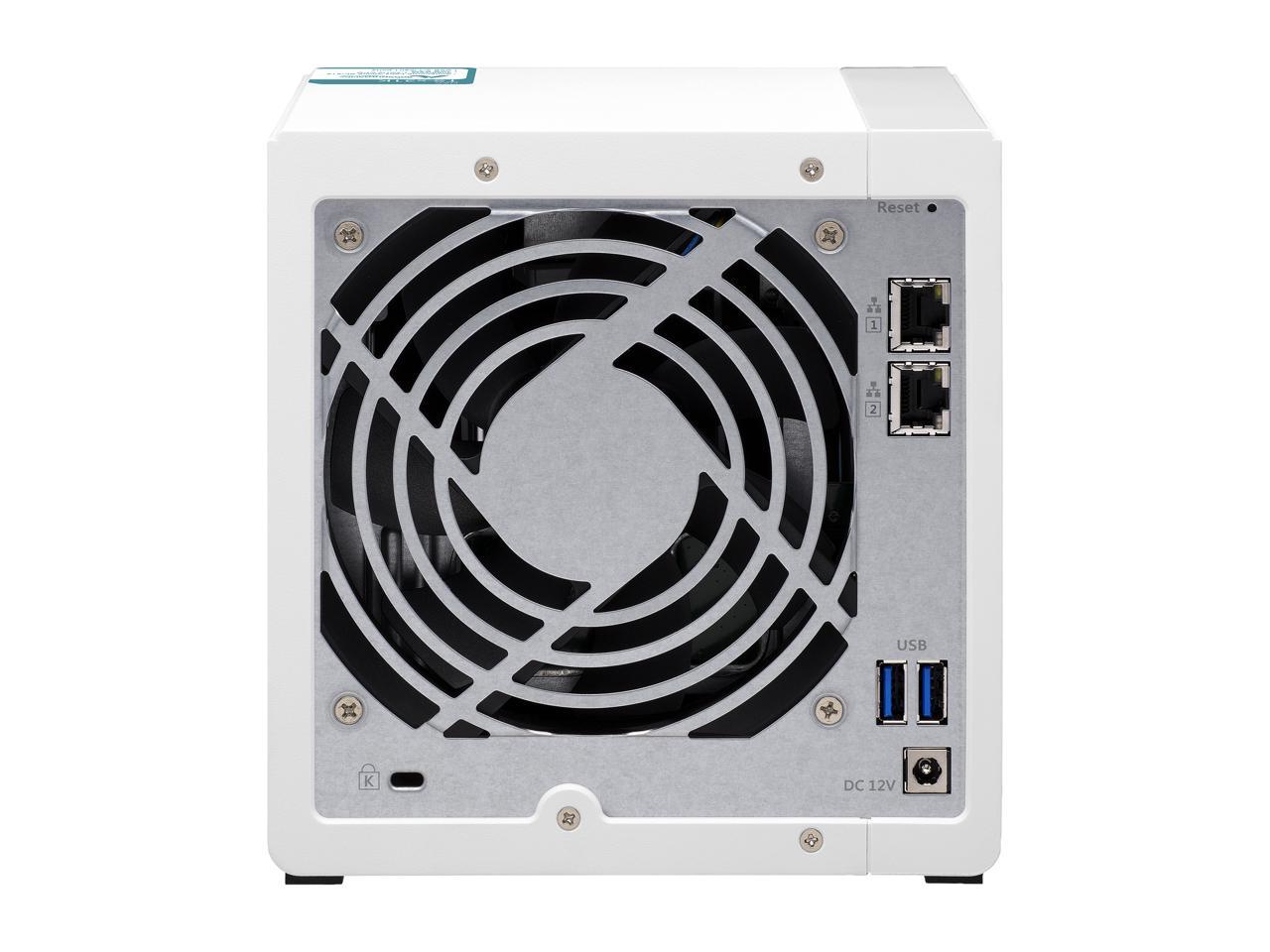 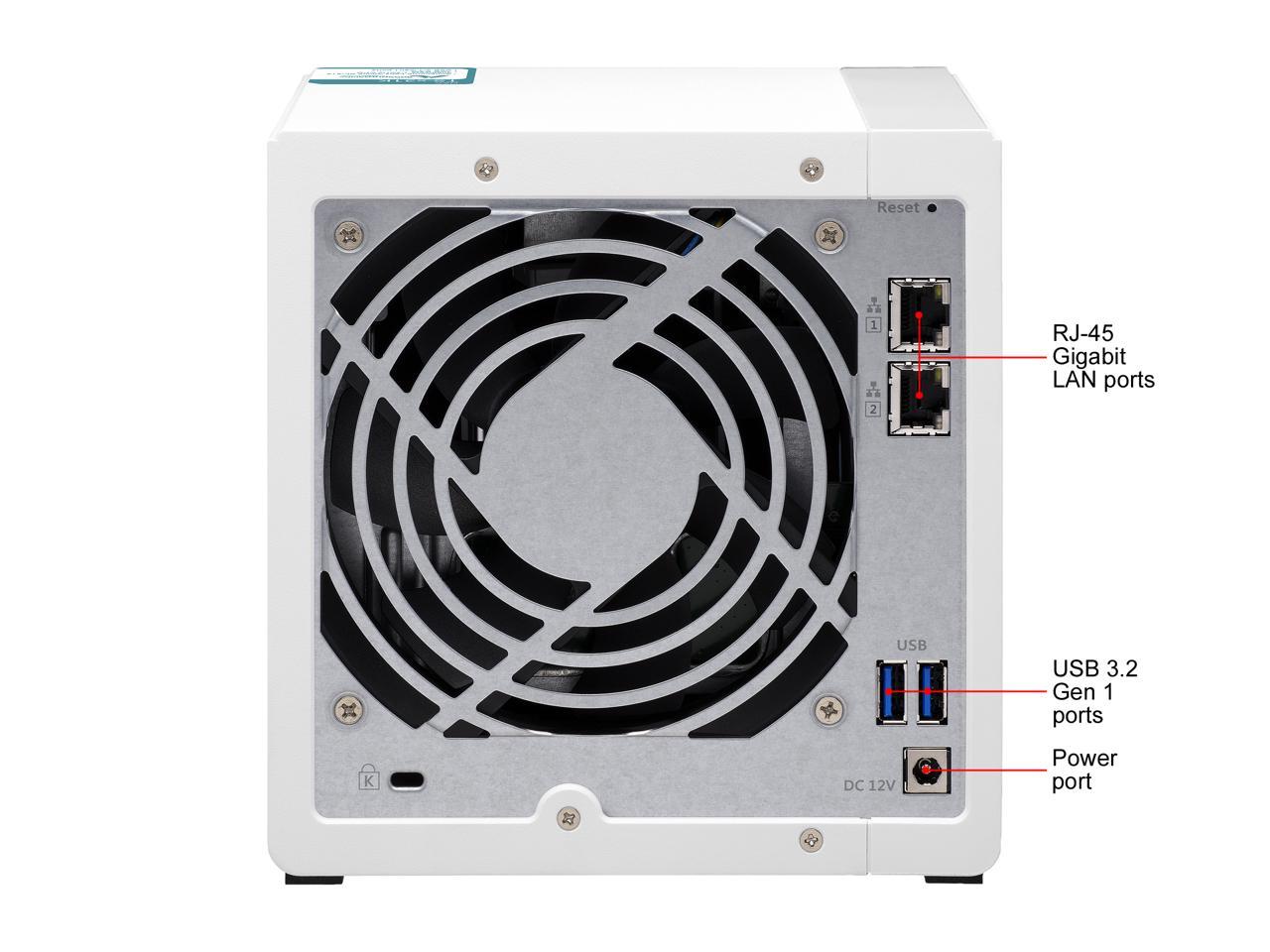 A 4-bay network attached storage solution ideal for home users and IT enthusiasts. It's powered by a quad-core processor, 1 GB DDR3 RAM, and two GbE LAN ports, offering smooth performance in data sharing, video streaming and file backup. Lockable drive trays ensure the drives will not be accidentally removed or fall out and cause data loss. And with a compact pure white minimalist design, the TS-431K can easily integrate with any home décor and takes up very little space.

HBS (Hybrid Backup Sync) can backup and sync your data to other NAS, servers and cloud storage for comprehensive backup and disaster recovery.

Snapshots fully record system status and data, allowing you to protect files and data from accidental deletion and malware attacks.

Connect to external USB devices such as card readers, printers or uninterruptable power supply through the USB 3.2 Gen 1 port for greater application potential.

The TS-431K is powered by a quad-core 1.7 GHz CPU that features more CPU cores to enhance system performance. With 1 GB RAM, two Gigabit LAN ports, and SATA 6 Gb/s drives, the TS-431K delivers high performance, while also maintaining data security. The TS-431K also features three USB 3.2 Gen 1 ports, allowing you to transfer large media files between the NAS and your devices. The USB port on the front panel supports one touch copy, making it convenient for you to backup data on your external device to a NAS or vice versa with just one click.

You can use QNAP USB 3.2 Gen 1 on 5GbE adapters (QNA-UC5G1T) with the TS-431K or your computer. By connecting the NAS and PC through the 5GbE adapters, you can create a 5GbE network connectivity for nearly 300 MB/s transfer speed.

QNAP File Station provides centralized file management, allowing you to view and manage files on your TS-431K and other storage sources or external devices, which allows you to easily share files with family and friends through email, social media, or share link. You can also use Qfile mobile app to access NAS files from a mobile device. File Station allows you to manage files stored on your QNAP NAS in your cloud space, or from USB card reader and mobile devices. You can easily access all your data from a single application. Qfile mobile app allows you to access NAS files from a mobile device anytime anywhere, while uploading and backing up files on your phone to a NAS. When sharing sensitive or confidential files on your TS-431K, you can enhance data security with File Station by encrypting files into .qenc files and set a password. The file recipients need to download and install QENC Decrypter on their computers and enter the correct password to decrypt, view, and use encrypted .qenc files.

Protect data against malware with Snapshots

Snapshots help protect your data by fully recording the NAS system status and metadata. If a file is accidentally deleted or modified, you can use snapshots from the Storage & Snapshots Manager or the File Station to quickly restore files to its previously-recorded state. QNAP snapshots are block-based and only record changed data. Not only does this save storage space, but it also reduces time required to back up and restore data. The TS-431K supports up to 16 snapshots per volume/LUN, and up to 32 snapshots in total. HBS (Hybrid Backup Sync) consolidates data backup, recovery, and synchronization, allowing you to easily backup or sync data to another QNAP NAS, and remote server or cloud storage (e.g. Dropbox® or Google® Drive) to build a reliable disaster recovery solution. Qsync turns the TS-431K into a secure, high-capacity data center for file synchronization. Any file uploaded to the TS-431K will be made available for all linked devices, such as computers, laptops, and mobile devices. You can also sync shared folders or create team folders to enhance team collaboration.

The TS-431K comes with a wide range of media applications, including Photo Station, Video Station and Music Station, allowing you to easily manage and view your media files. You can also download Plex Media Server to turn your TS-431K into a multimedia server.

Features intuitive interface for you to arrange your photos by drag and drop. You can set access permission and can easily share photos to social media. By installing Qfile or Qphoto mobile apps on your mobile device, you can quickly upload your phone photos to TS-431K.

A management tool for you to easily manage the videos on the TS-431K according to different categories from a single interface. You can stream videos through DLNA®, Apple TV (via Qmedia) and Chromecast™* to different devices.

* To stream videos via Chromecast, download and install the multimedia extension pack app from the QTS App Center.

Allows you to organize all your song collections by category, and automatically retrieves album covers, making it easy for you to customize playlists and play songs anytime and anywhere from the web-based interface. Music Station also provides Internet radio service for you to listen to any global Internet radio program.

Install Plex Media Server on the TS-431K and stream media files on your NAS to Roku®, Apple TV (via Qmedia), Google Chromecast™, and Amazon Fire TV® for you to enjoy files on your mobile phones, tablets, DLNA® devices or on a TV.

Surveillance Station features a user-friendly interface, supports over 3,000 compatible IP cameras, and provides expandable IP camera channel licenses, allowing you to build a comprehensive surveillance system for real-time monitoring, video and audio recording and playback. You can use the Vmobile app on your mobile devices to manage the monitored channels anytime and anywhere. You can also use QUSBCam2 App to add USB cameras to the Surveillance Station to view real-time images and store recordings for playback, allowing you to build a surveillance system on minimum budget.

* The expansion enclosure can only be used as an individual storage pool or volume on the NAS. Its storage pool/volume cannot be combined into the connected NAS.

Migrate to a New NAS

Install your NAS hard drives into a larger QNAP NAS and retain all your existing data and configurations.

Learn more about the Qnap TS-431K-US

Pros: Its has an easy setup and nice ui.

Cons: speed seems normal full gb with one line. the low amount of memory doesn't seem to hurt much unless you use a lot of applications or have a lot of people copying files at one time. *EDIT: it was doing some kind of optimization causing a slowdown possibly due to the hdd size but it seems to have finished and it copies just as good as my old one.

Overall Review: must of been updating or something I don&#39;t know but its much more responsive than my old synology nas. make sure to disable the services you use so they don&#39;t take up memory.

Cons: Needs more RAM, only 1 GB For a non-linux/unix person, learning to share disks between my 2 different NAS boxes was a challenge.

Overall Review: I would recomment this box...

Pros: - Easy to set up and configure - Plex and many other applications available for download - Works great with my Macintosh, Windows, and Linux machines - Supports external USB devices

Cons: - Not significant drawbacks, but you should be aware that this device only has 1 GB of RAM so that will limit the services that you can run on it. As I am just using this to provide basic backup and file sharing its not a limitation for me. - The drive bays are plastic, it would have been nice for them to be metal and more durable.

Overall Review: I'm very happy with this device and is seems like a good fit for the home / small office environment.

Pros: - Easy to use, quiet, and doesn't take up much space. - Looks like it has hot swap capability. - The GUI is easy enough to figure out. My previous set up was a Linux server running SMB and controlled via Terminal from my iMac so it took some getting used to. - Front mount USB - Able to connect other extendable units to this device via USB on the back (untested by me). - Can take an extended amount of time to power down.

Cons: - It's a slower CPU with not exactly much RAM. If you were using this to also do a web server or CRM software that can be installed, you could start having issues. - Found it annoying that I had to copy off data from existing HDDs; putting in a drive will require it to be reformatted. Luckily for me, the front USB port is USB3 so my dock was useful there. Had to juggle things between drives but too a good four or five hours to do. - If you're using ExFAT drives, you have to by a license before you can use the drive(s). The license is cheap and perpetual.

Overall Review: My overall system only has two computers, a couple tables, a set top box and a phone. The two computers (an iMac and a PC) share data files for my CAD, 3D mesh and texture work. It's nice having mapped drives on both machines that are connected to a third device to provide some backup protection. The only other service it runs is Plex to service the set top box and the tablets, but even that demand is pretty light. I knew going in about the non upgradability of the device but the price was right.

Overall Review: I'll recommend it anytime. my only regret I should've bought a 4 bay unit !!! that would be my next move :)

Pros: Easy to set up and it works like a champ.

Overall Review: I would recommend this product to anyone who is looking for a NAS

Pros: Worked out of the box.

Cons: Nas only has 1 gig of ram.I knew this before I bought it.It is very slow.But,I still would have bought it.

Overall Review: I would not recommend this to anyone and I regret my purchase. This product line is all show, no go. It seems specifically designed to suggest more function than it can deliver, while intentionally preventing you from upgrading the most significant resource: RAM. I assumed a 4 bay NAS in 2020 would have enough power and resources, but I should have read the fine print. Better off going with a Synology 2 Bay + unless you need the 4 bays.