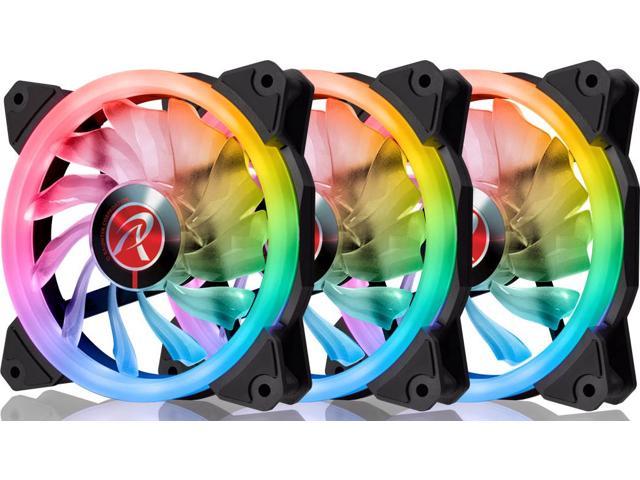 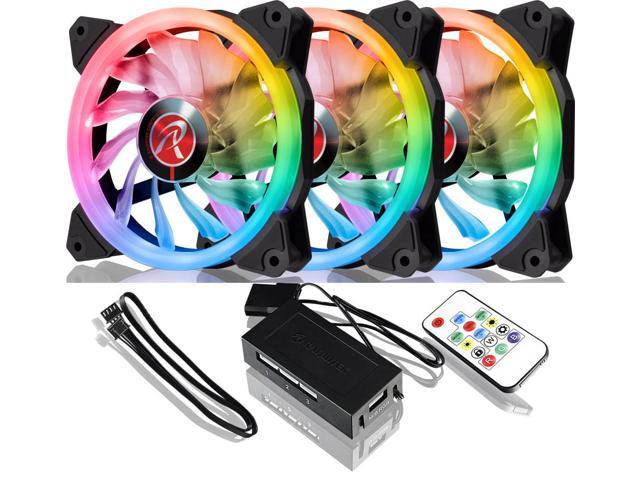 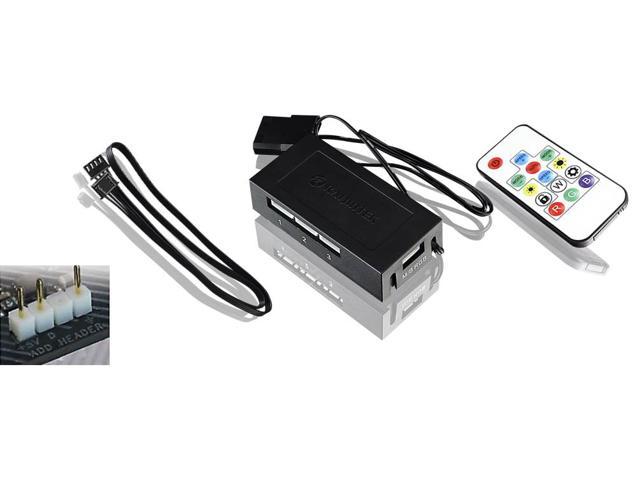 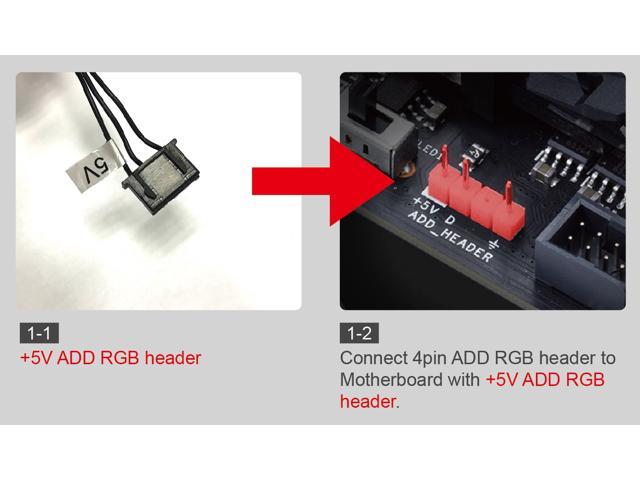 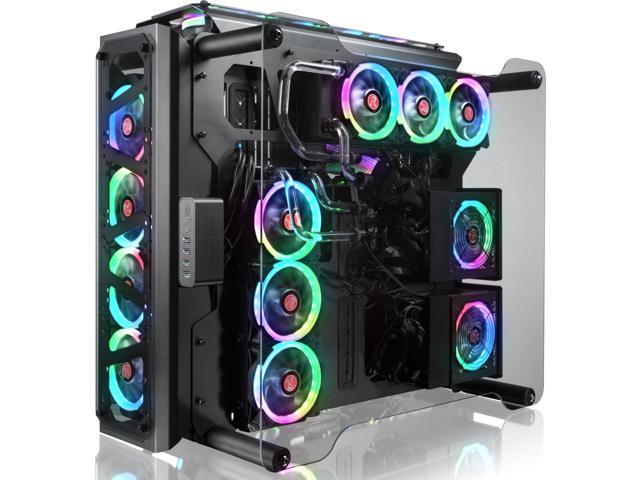 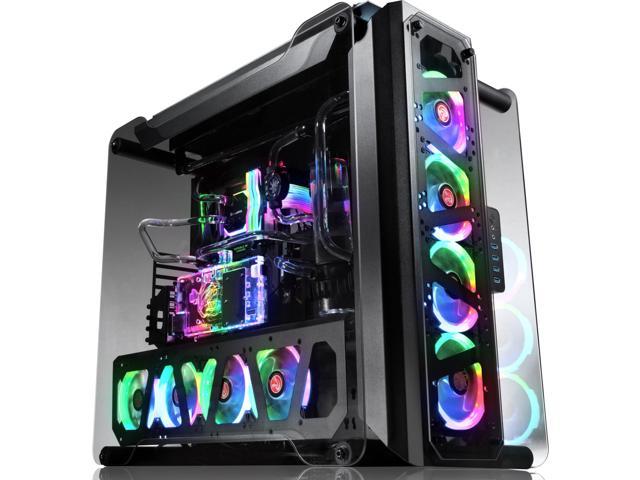 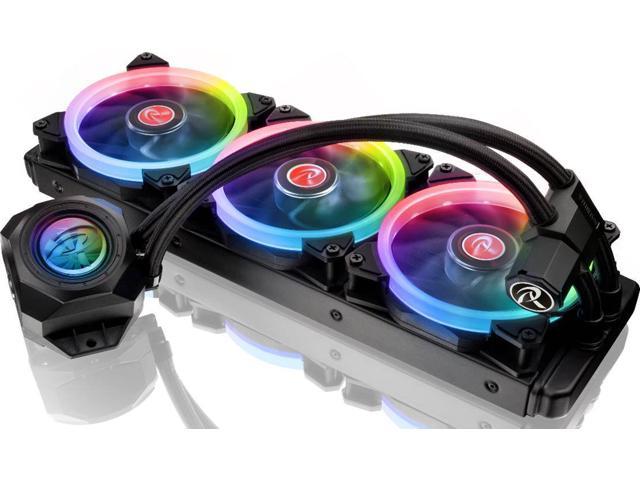 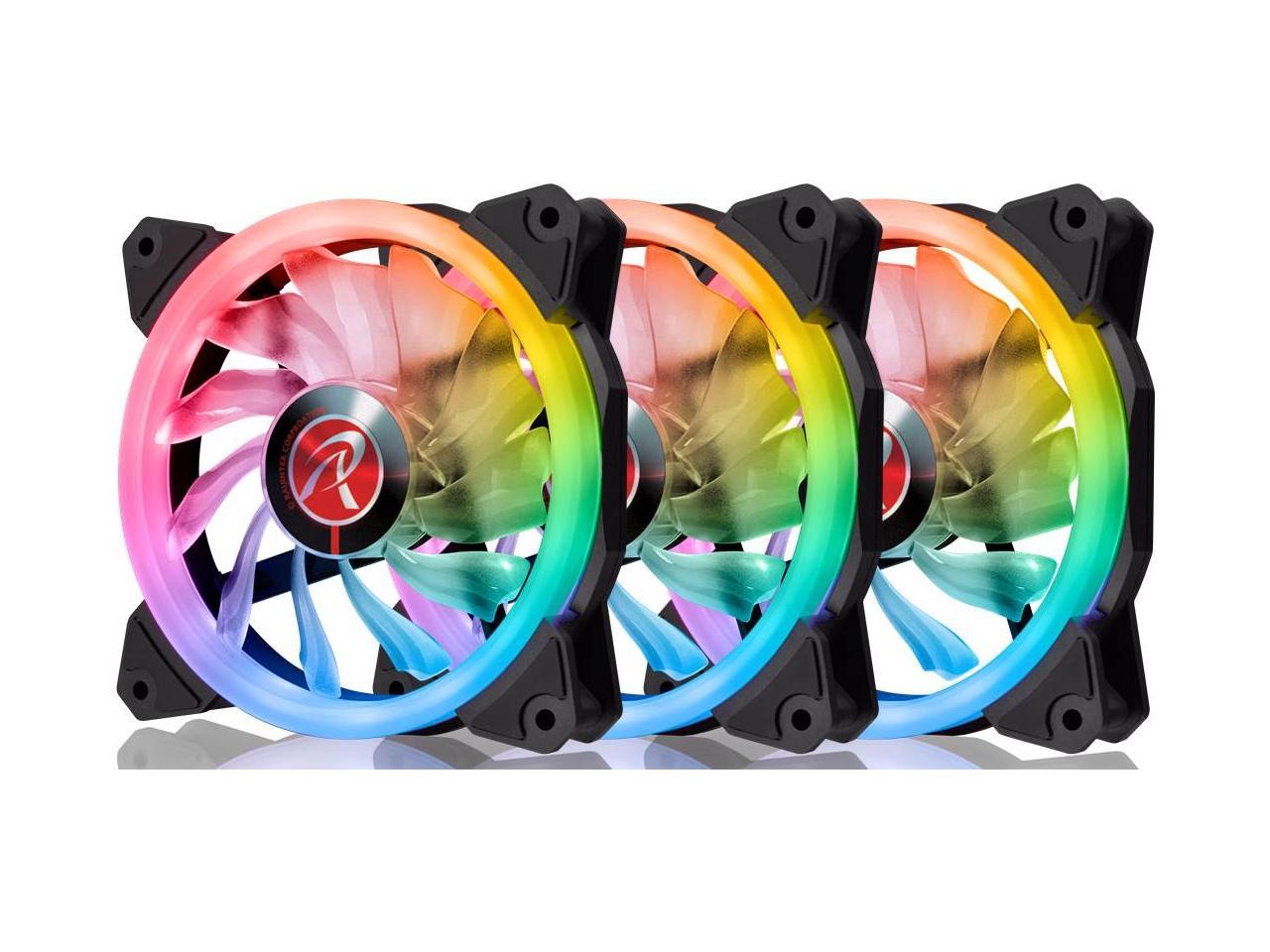 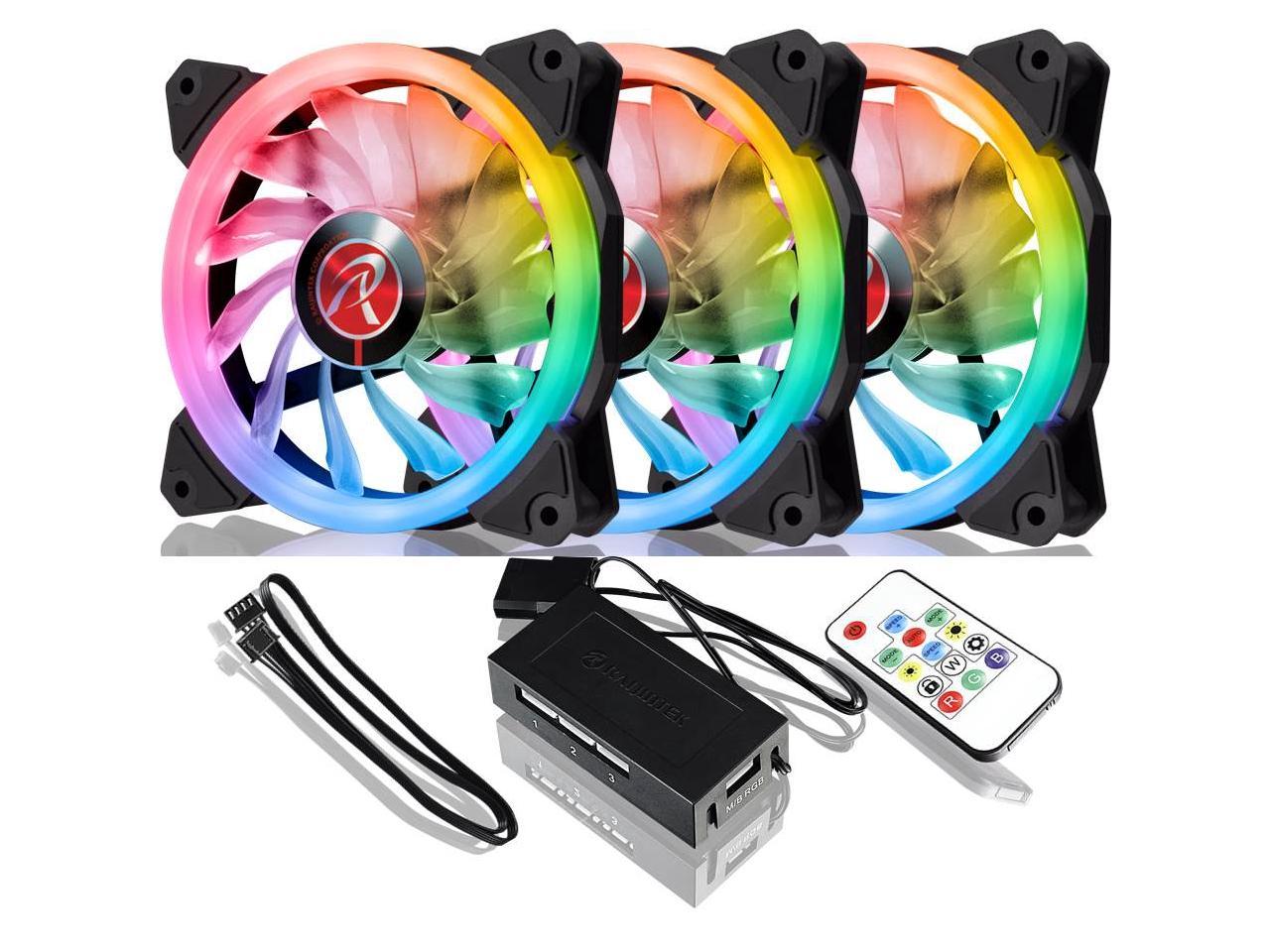 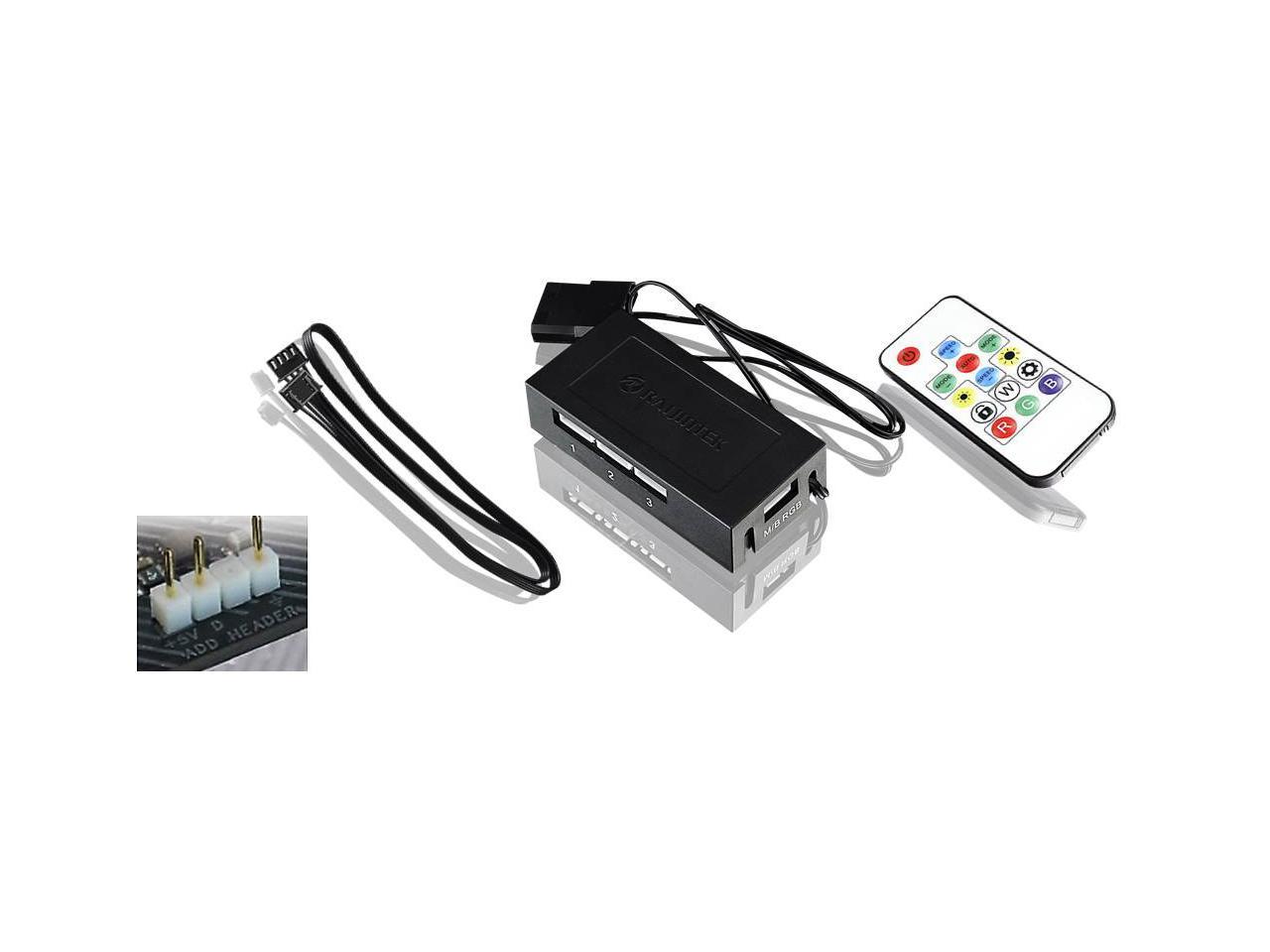 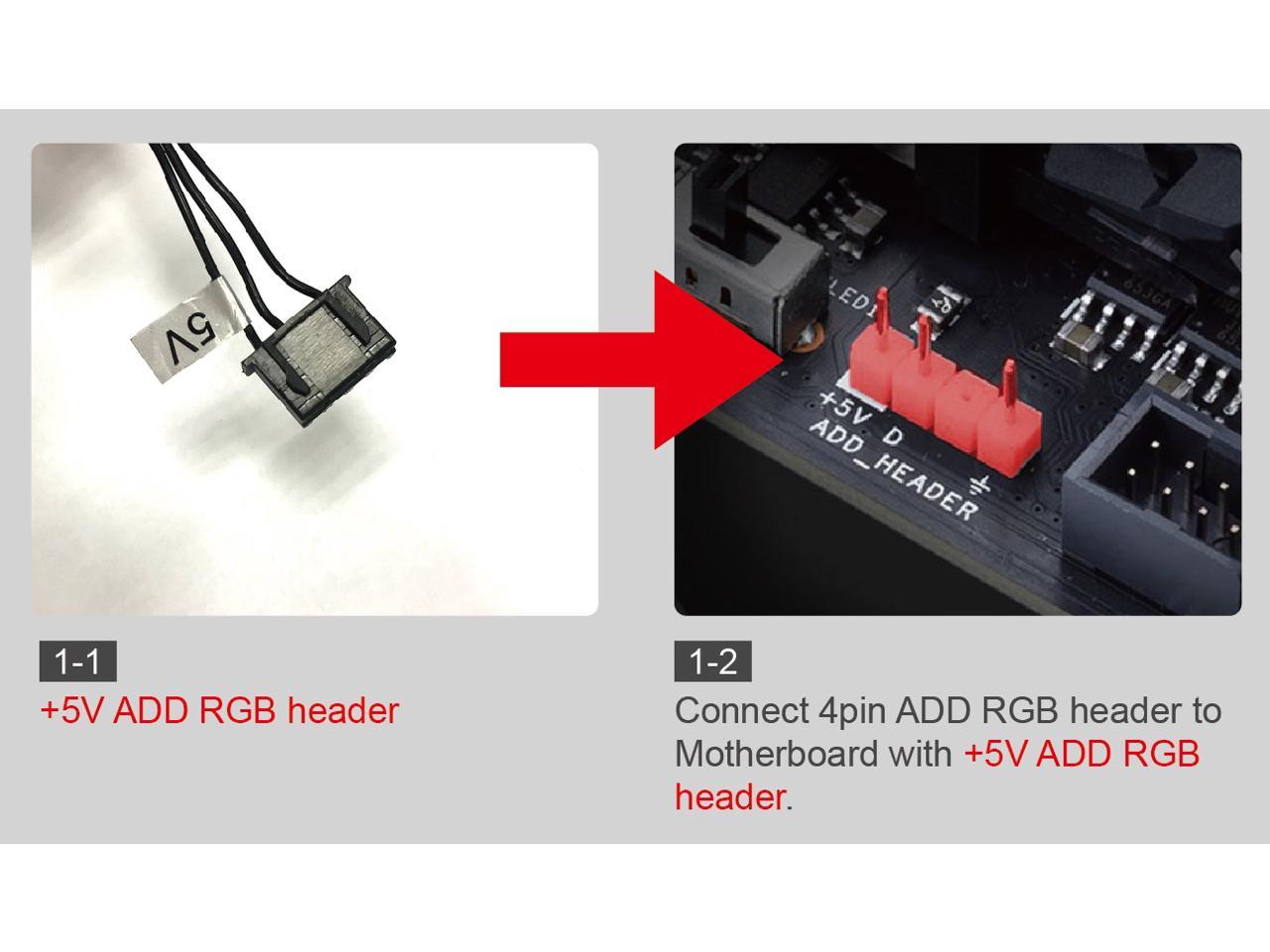 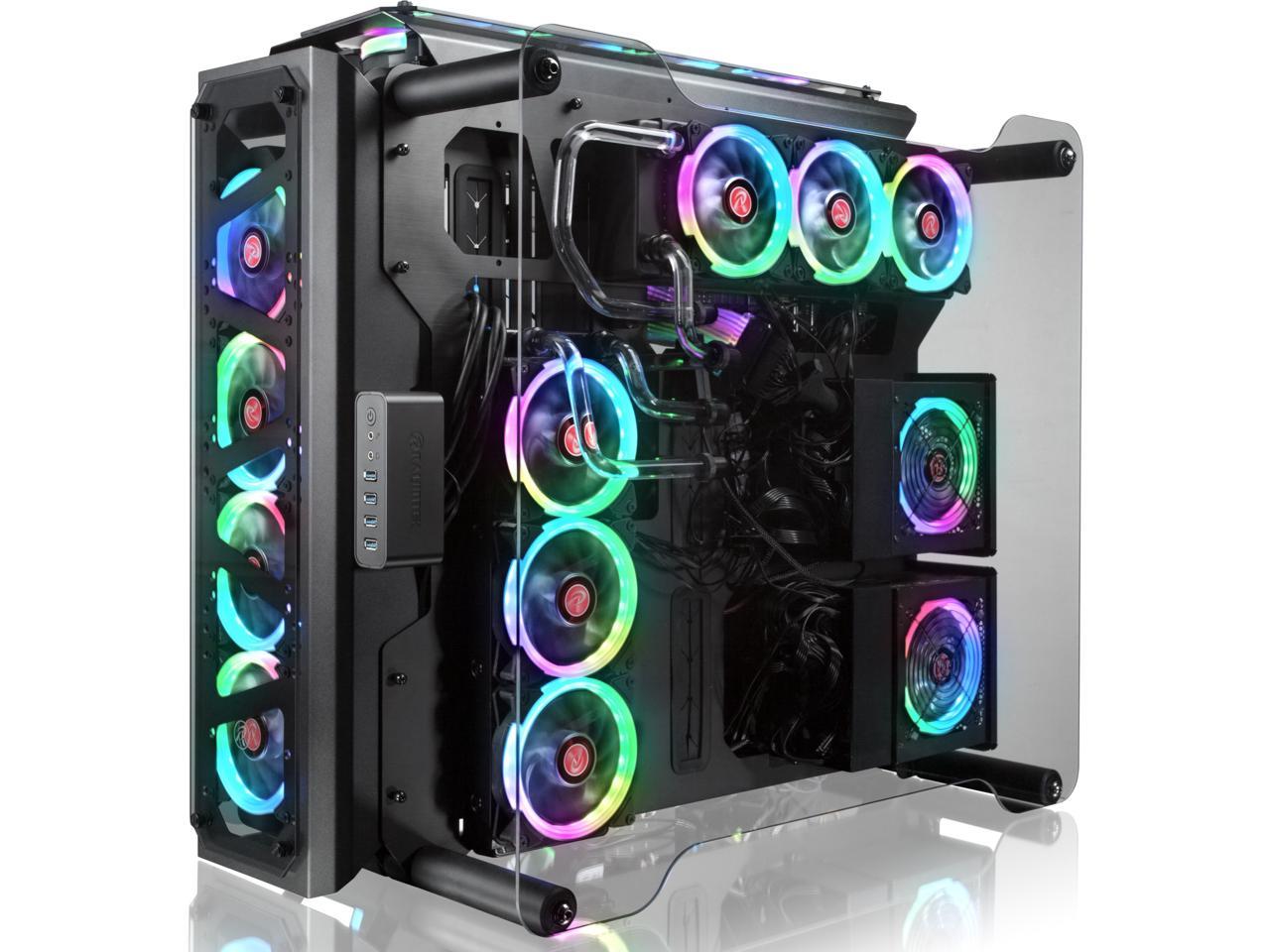 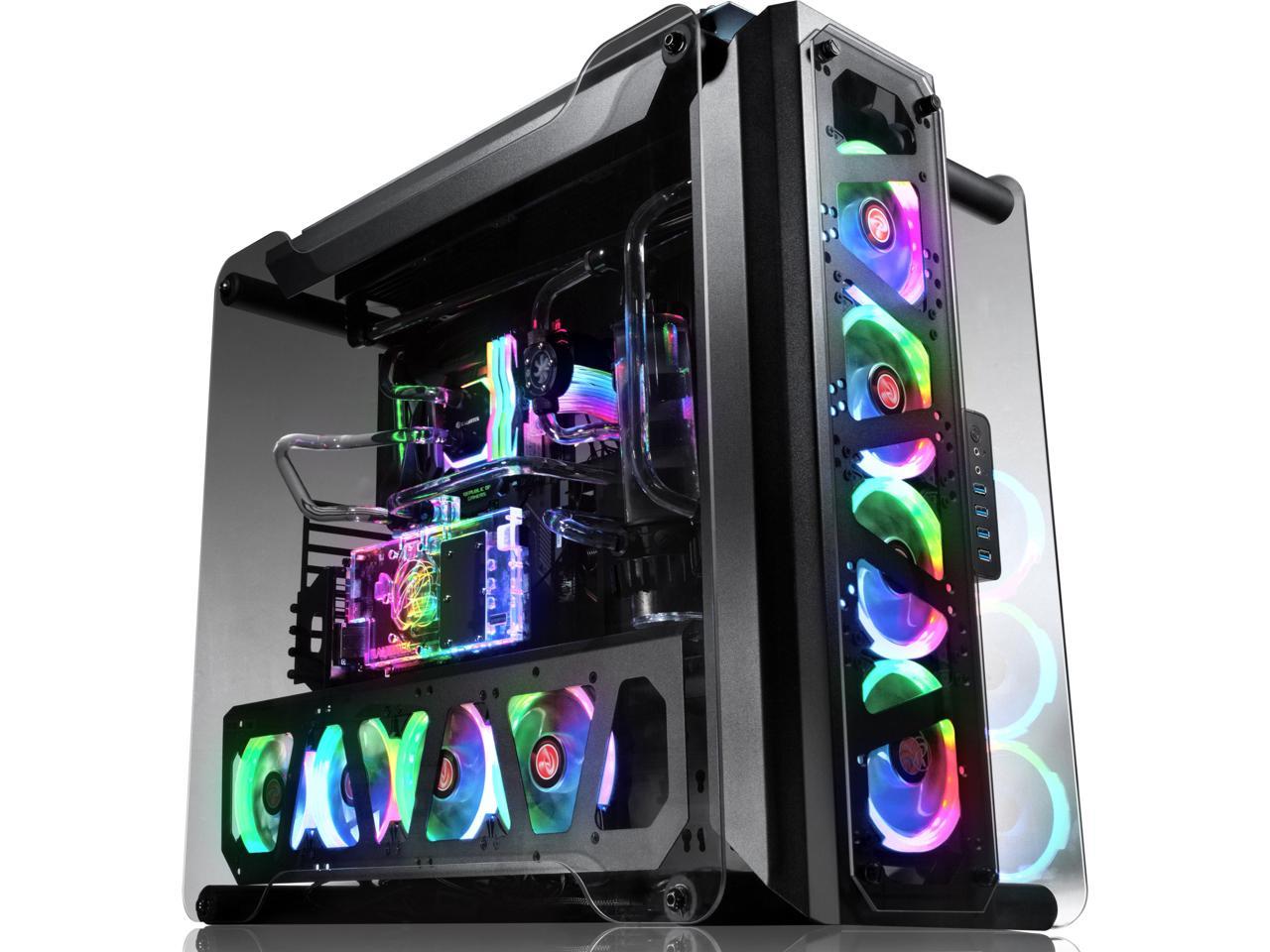 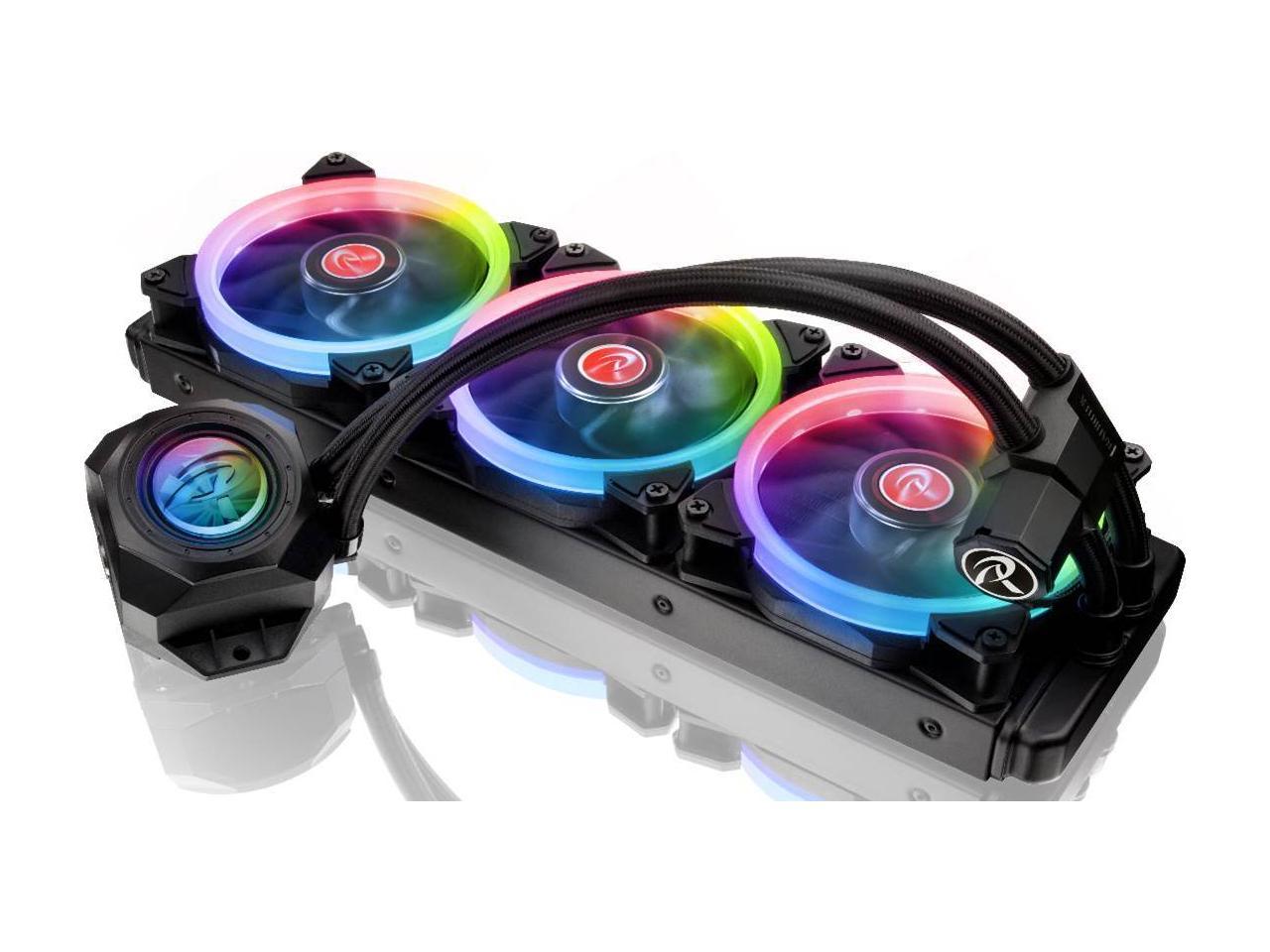 RAIJINTEK IRIS 12 RBW ADD series, 12025 O-Type ADD PWM fan, continues company's innovative design and providing advanced features & additional value to end users. With 8 port ADD LED hub and remote controller (for 2 & 3 pack), you can set your IRIS 12 RBW ADD fans to stun with fading, breathing, blinking and single color LED modes. The IRIS 12 series combines optimized Eleven fan blade design to provide high-volume air delivery with less noise and turbulence, O-type LED ring and 15pcs LEDs to brings visible color and brightness uniformity from all directions, Hydraulic Bearing with Low-Noise Design, and Anti-Vibration rubber pads on all corners. Standard with LEDs incorporated with transparent frame and blades, IRIS 12 series is not only insuring your case to be the center of attraction and a spot light to chassis, but its optimized fan blade and housing design also provide outstanding air flow and cooling performance for your PC’s motherboard and CPU. Pros: - They match my Raijintek case's default rear fan in terms of the material and design, and they spin at a fairly good speed.

Cons: - After plugging everything into the hub and the hub into the motherboard's RGB header, the fans themselves seem to do whatever they want to, whenever they want to. - Only the case's default fan in the back actually works with ASUS Aura Sync. These fans do not seem to cooperate at all, despite being made by the same company and all fans plugging into the same hub. - Tried it with both the case's hub and the hub included in this pack of fans, and neither worked despite the hub supporting up to 8 fans. - There is basically no manual for these, so I don't really know how to troubleshoot them at all. Instructions online suggest plugging them in one at a time, in order, and even doing that doesn't seem to help. - Hub plugs into a molex connector, and it would be nice to get any other source of power, really.

Overall Review: - Probably wouldn't recommend these to anyone, and I imagine the tech support for this product is basically non-existent or not very helpful. Definitely going to return these.

4 out of 4 people found this review helpful. Did you?
Anonymous
Ownership: 1 month to 1 year
Verified Owner
Brilliant color, terrible controller2/16/2020 9:00:02 AM

Cons: Controller is all but worthless' Can't dim LED lights There really isn't 20 modes Power is via a Molex rather than more common SATA power connection

Overall Review: The LEDs are extremely bright and for some folks/applications too bright. Unfortunately the controller does work very well. There are no written instructions as to how the controller works leaving one to stumble around trying to figure out how to make it work. Worse, the controller actually doesn't function very well at all. It will not dim the LEDs, the lock function doesn't work, etc. I would get the LEDs into a color patent that I wanted then after a minute or so the LEDs would randomly start to cycling through various modes and colors. I finally (and I'm not even sure how) got it locked into a mode that I liked and have left it that way. The manufacturer claims 20 modes but only if you count solid red, blue or green as a "mode". Similarly, flashing red, green or blue colors count as a "mode" each. I purchased 6 of these fans to replace 140mm Coolmaster fans that I installed a year ago into a new build but they were starting to die. From a cooling perspective, these fans are reasonably quite and provide adequate cooling. I have 5 of them installed in a double wide Corsair cube style case. The CPU is a slightly overclocked Ryzen 7 2700X with 32Gb of memory and 3 1Gb SSDs. The GPU is an AMD based 580 with 8 Gb or memory. The power supply is a 750 watt Thermaltake that is isolated from the mobo side of the case by a metal plate and has its own cooling fans. Overall, if one can accept the fact the LEDs can't be dimmed, and a remote that is wonky, for the price these fans provide adequate cooling at a reasonable sound level.

Overall Review: Since there is no manual to reference, I connected the power cable to my PSU, 4 Sklera fans to the hub, and a 4 pin connector between the hub to the motherboard. Turned on the power, the hub starts to smoke. Now the hub is fried and I have no way to use all the fans.

Pros: These are very nice, may diffrent modes and they can be set to a number of diffrent colors from the remote control. I replaced the fans on my CLC system with these and they seem to work very well. I really like look of these in my case and may be purchasing more to replace the other fans in my case.

Cons: They don't seem to have the top RPMs that some other PWM fans have.

Overall Review: Overall I would recommend these. Keep in mind the order that you plug these fans in from 1-3 because some of the Modes use the fans in a specific order, which looks really cool when they are plugged in correctly.

Pros: -Keeps my i5-8600k (OC 4.9Ghz) at 31°C idle and 72°C after 2+hrs under full load. -The block is a bit bulky but still pleasing to the eyes. -After more than a month I still haven't had the problem with the flow meter that others have.

Cons: -The 1 egg was removed do to the fact that I still can't get the RGB lighting to work with my Gigabyte Z370 Ultra Gaming WiFi motherboard. There are only so many different ways to turn a 4 pin wire. . . -Old school bulky block.

Overall Review: The "outside" pump is unique but not necessary. Could have left it inside and put the flow meter in its place so the block could have been made smaller. Other than my small quips I would recommend this.

Cons: -sent a 5 port hub -can't override fan control on hub, had to plug fans into motherboard so they weren't stuck on high being loud af -magnetic plate for hub is thick and weak to the point where if i were to bump a wire the entire hub would fall off the magnet

Overall Review: after i got past all the cons the fans work great and look great but diappointed with the hub. buy the fans without the hub.

Pros: Not many lighting effects with the control hub but some unique ones other manufacturers do not offer. Moves a good amount of air.

Cons: You have to know which fans are compatible with Raijinteks two different control boxes.

Overall Review: Worth the cost