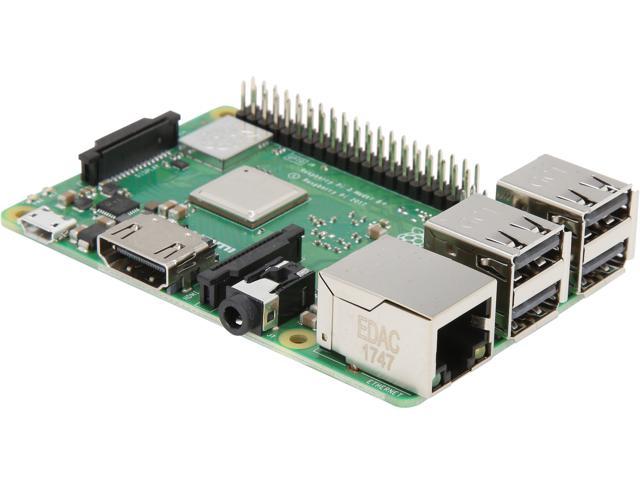 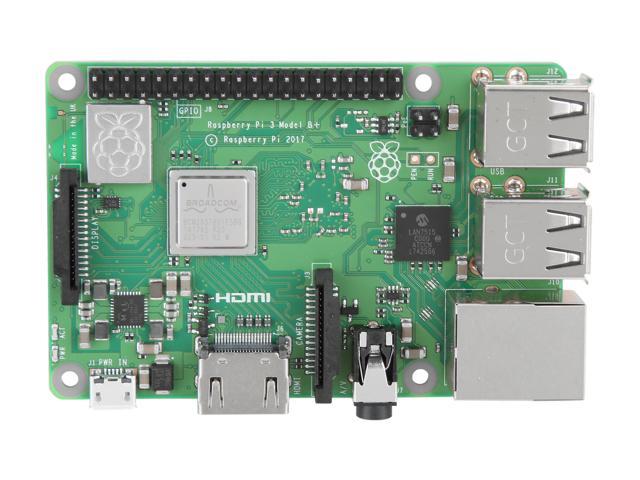 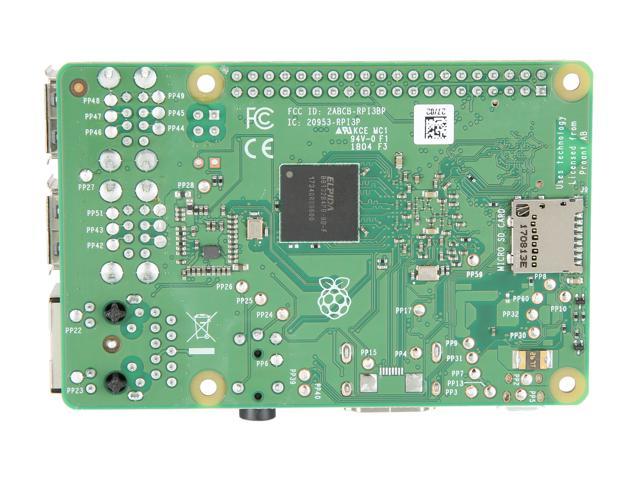 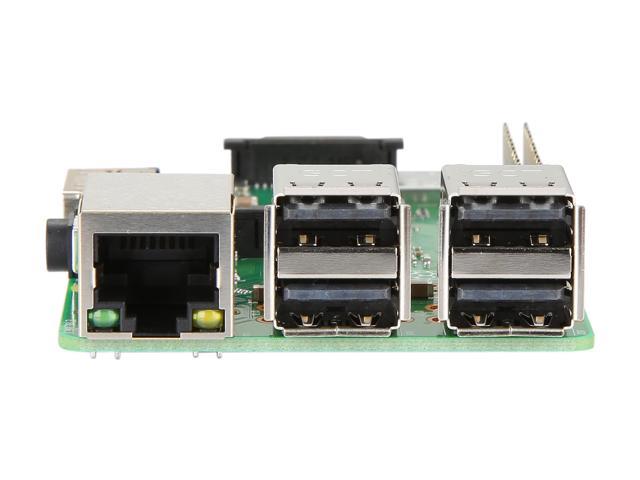 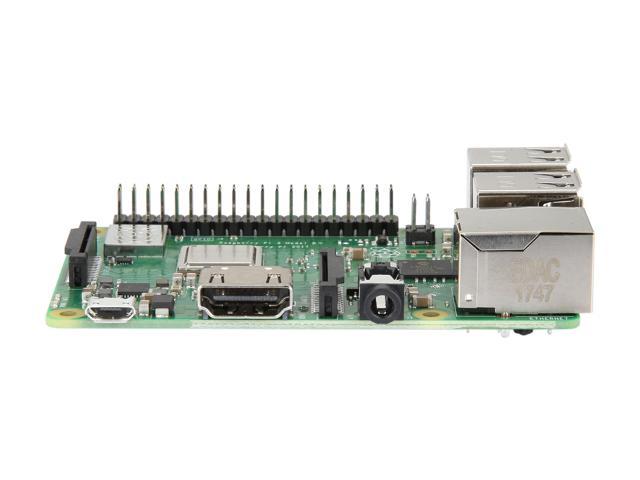 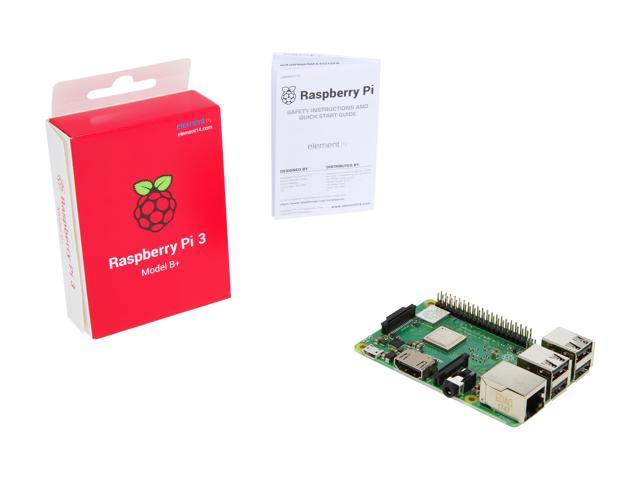 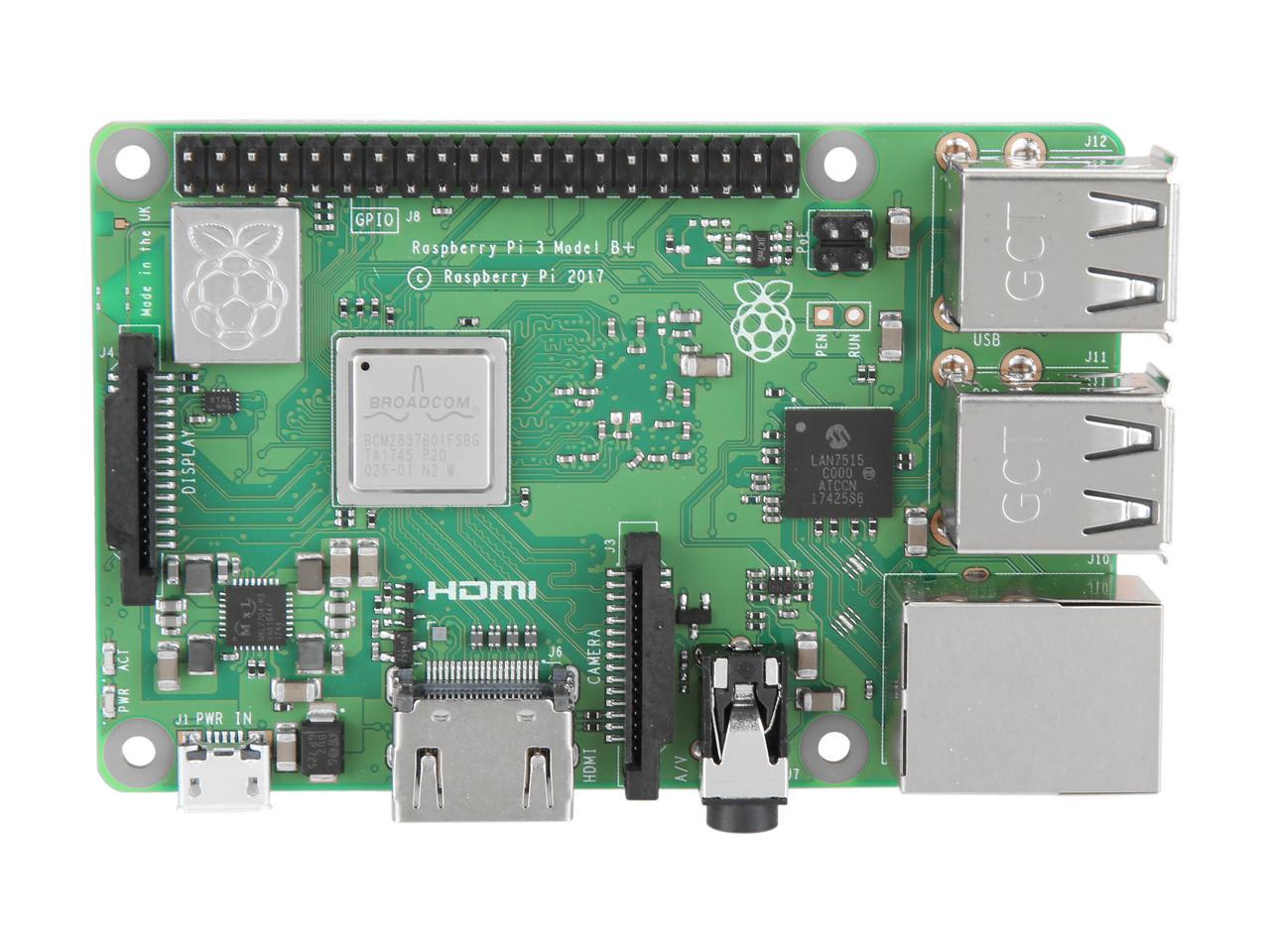 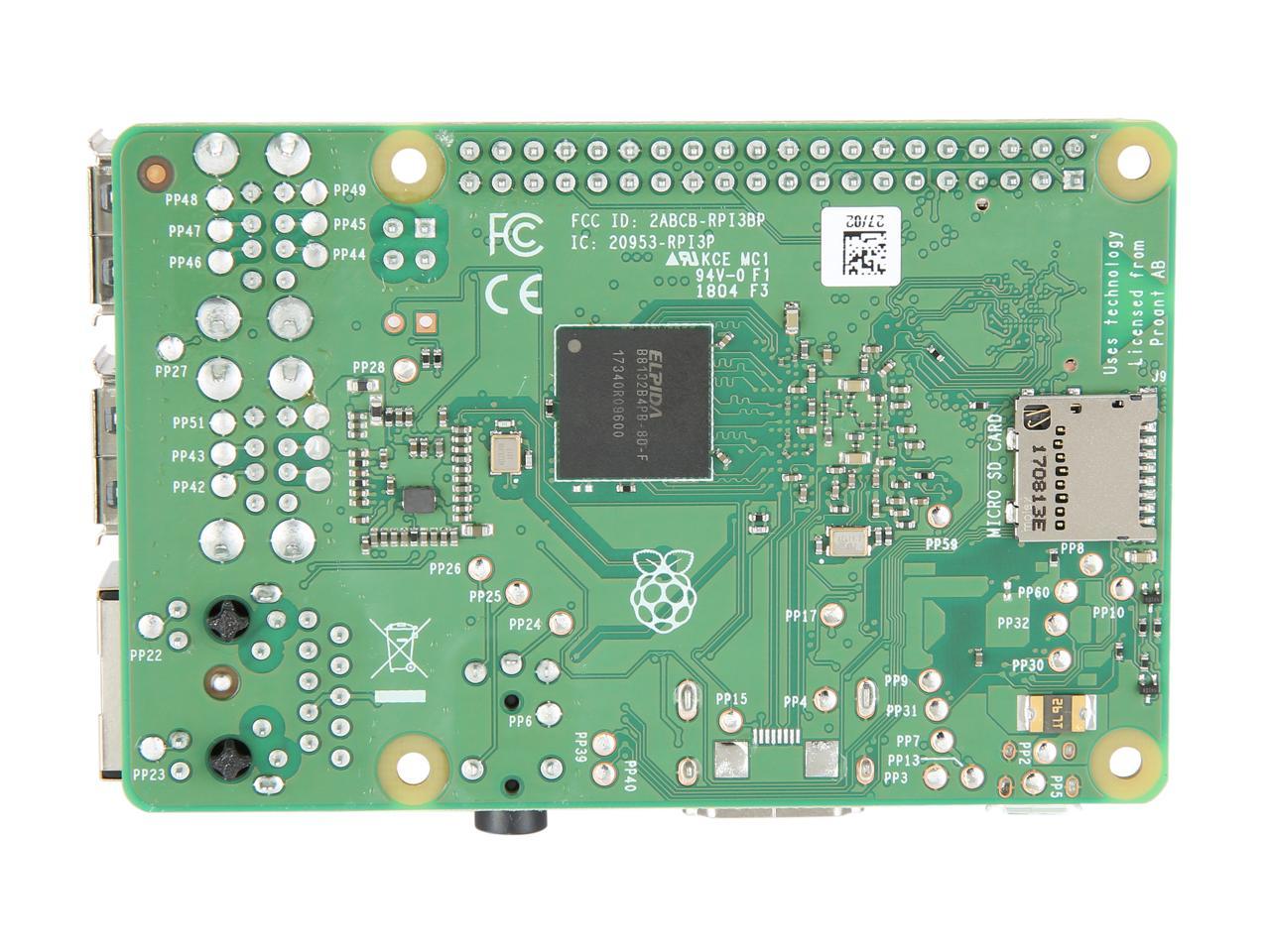 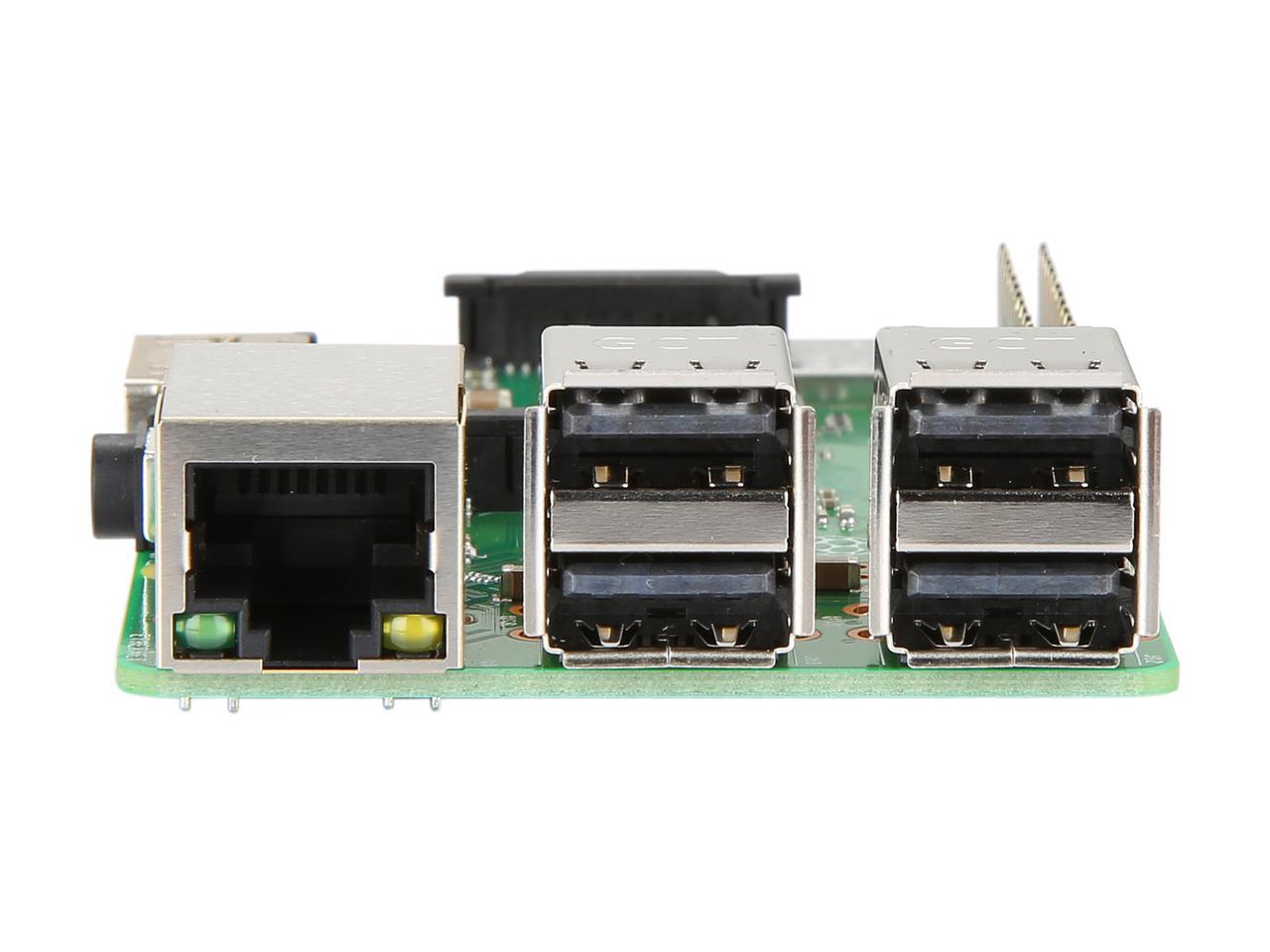 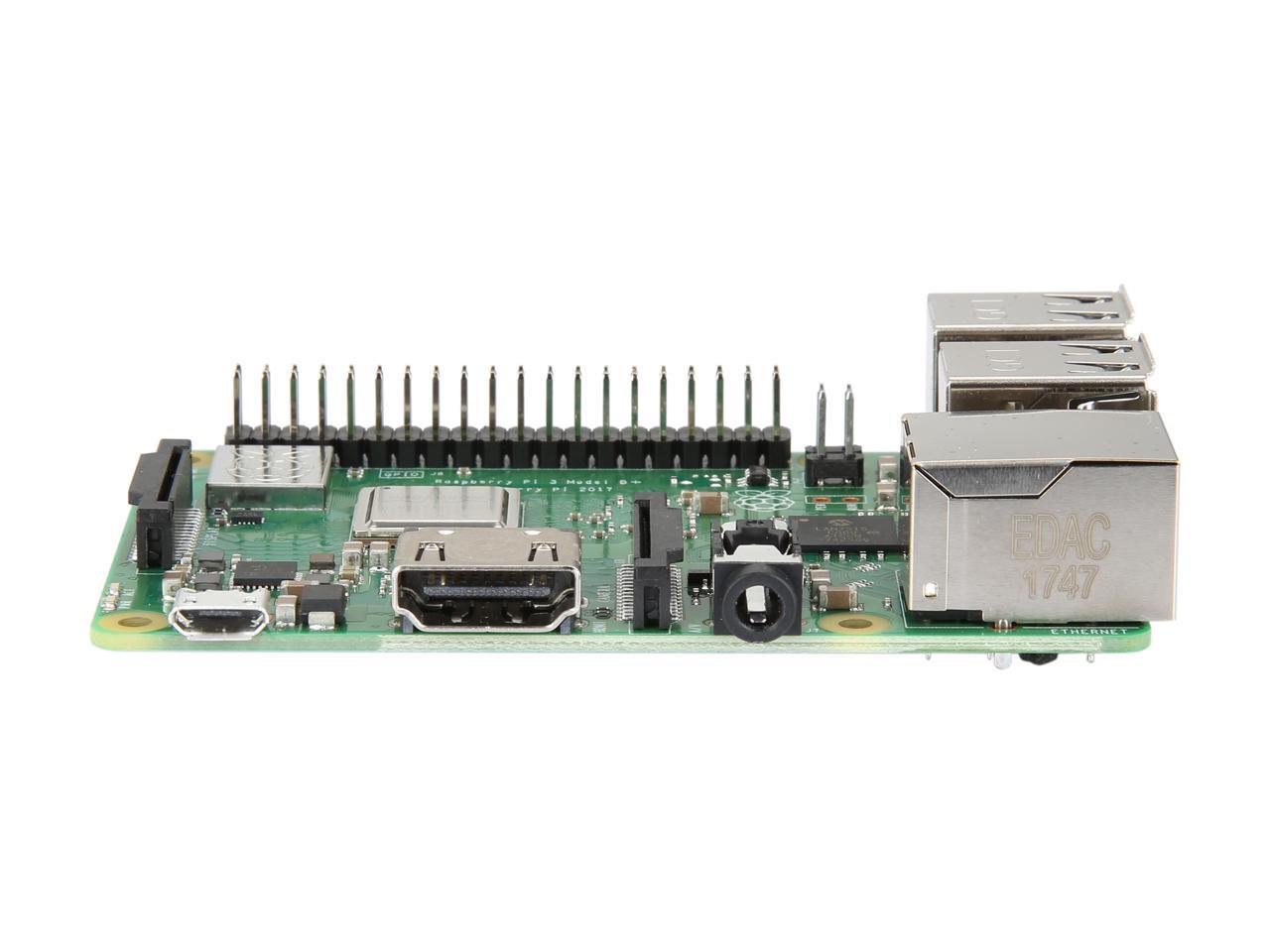 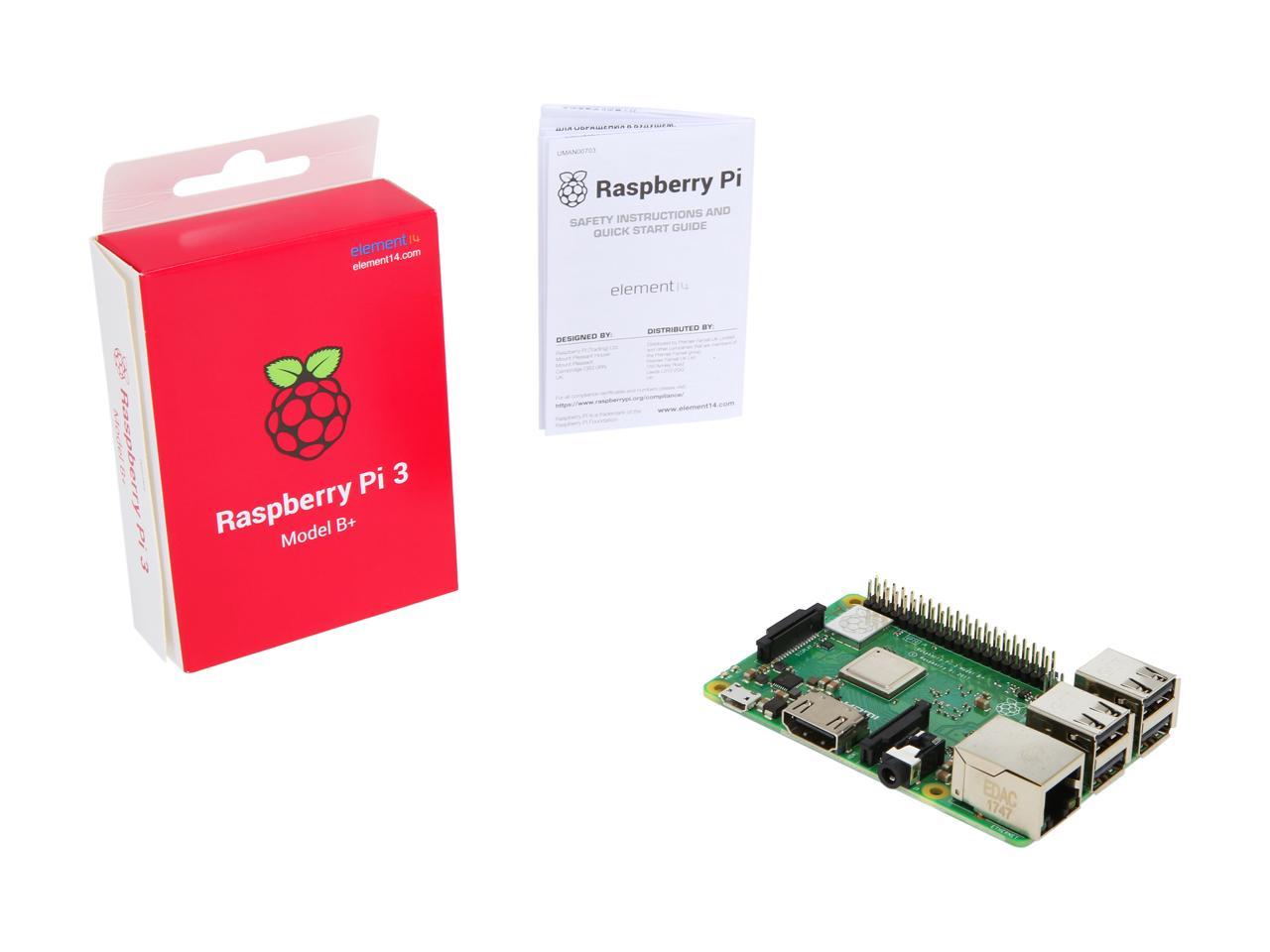 The latest product in the Raspberry Pi 3 range, the Pi 3 Model B+ is built on the Broadcom BCM2837B0 64-bit quad-core SoC which offers 200MHz increase in peak CPU clock frequency compared with the Pi 3 Model B based on Broadcom BCM2837. Other features include dual-band 802.11ac, Bluetooth 4.2/BLE, faster Ethernet, and Power-over-Ethernet support (with separate PoE HAT).

TO GET STARTED YOU’LL NEED:

What is a Raspberry Pi

Pros: Noticeably faster than the Pi 3 B. Extra header pins allow for plugging in of fans, and lights while still allowing you access to the GPIO pins. Aside from the addition of processing power, this Pi comes with several updates in its networking capabilities.

Cons: Currently there is only one OS that works for this SBC (06/28/18 Raspbian/Noobs). As people switch to this Pi that should change. The additional header pins make this Pi (3B+) incompatible with some of the 3B cases and accessories. That is something to consider when shopping for accessories (my topHat, Wingoneer RTC-HDMI to VGA, works fine. I have had issue with a case that needs to be modded in order to accommodate the new header pins).

Pros: Much faster and more powerful than the first Raspberry Pi.

Overall Review: I used mine to build a retro gaming system for nostalgia. I did this once before using the original Raspberry Pi and the result, while not terrible, weren't exactly the best. This new B+ Pi 3 is night-and-day above the original in performance. I can now emulate things that the original just couldn't handle at all. My retro gaming station is now everything I wanted it to be. I also tried out the desktop experience using this Raspberry Pi. That has also improved by leaps and bounds. It certainly isn't going to replace my desktop or work/play laptop computer, but if I needed to do some light word processing or send and receive emails for work or business, it would get the job done.

Pros: Cheap enough for tinkering but powerful enough to run my home automations.

Overall Review: Newegg packaging and their choice of DHL is enough to make me want to buy my next Pi elsewhere.

Cons: Delivered loose in a tiny cardboard box with nothing holding or protecting it in any way turns on with red light but green light never turns on

Cons: Packaging of product... In a paper box with with NO padding.

Overall Review: Then NewEgg ships in a padded envelope. Box arrived shredded, though board did work. This endded my relationship with NewEgg along with their DHL shipping company holding package for 2 day 60 miles from my home. they should of justed used the Post Office- who physically delivered the package, "the last mile".

Pros: -low power. -popular and we'll supported. -Accepts standard microusb for power (but not data) -Small. But not as small as others. -Schematics publicly available, although they are stripped of all information making them frustrating to reference. The whole system is crammed onto a single 8x10 page with 90% white space, if that tells you anything.

Cons: -No BIOS or configurable boot options. -Bootloader is non-standard and proprietary. Is locked to an unusual, unconfigurable, MicroSD only boot. -Boot to USB, Ethernet, WiFi, Serial and other normal options are locked out of box. -Only supports certain VERY specifically configured micro SD cards for booting. -No ROM nand onboard storage at all, not even for a custom bootloader. -No markings on PCB to help. I expected at least the VCC, GND and Serial IO pins to be labeled. -PoE pins are labeled but undocumented and do not function normally. -No power on/off or reset button. They say you must perform a clean shutdown before removing SD, yet they provide no method for poweroff at all besides yanking out the power cord! If your system fails to boot, you have no option but to damage the SD, reformat and start over -Serial IO does not function with most Serial interfaces due to a bug in the UART clock multiplier that insists on a highly unusual baud rate setting that simply isn't available on most equipment. R.Pi admits this is a bug on their FAQ, yet instead of fixing it, they just provide complex instructions on how to fix it yourself. These instructions cannot be done if you cannot boot the device, which is typically the reason we need Serial IO. -No backup, alternate boot options or any method for emergency system recovery at all. If your SD card gets damaged, you have no possibility to recover or repair the Pi at all since not even the Serial console works... -Comes in empty box with ZERO instructions, no power supply, no SD card, no preinstalled anything, no help whatsoever. -The large display output and the camera input ports are silly, redundant and non-standard making them completely useless outside of the official Pi accessories. I see no point when there is HDMI output for any display and USB inputs for cameras. Why include these other interfaces that have no benefit and are not compatible standard gear? -WiFi has no antenna connector and completely failed to work in any way for me. Research showed it almost never works for anyone and it's suggested to just use a normal USB WiFi dongle... -No firmware updates, ever AFAIK. They just keep selling the bugs and save the fixes for the next model. -Overpriced! Especially considering the cons above, this thing is nowhere near a good value compared to it's truly open source and standards compliant SoC/developer boards that are abundantly available for often far less.

Overall Review: Honestly, I expected this to be a great device considering all the hype. But mine didn't even last 2 weeks. first time I shut it down, it blew it's 3.3v regulator somehow and is now an unrepairable coaster. As a seasoned hardware hacker, with hundreds of routers, game consoles, chipsets, motherboards and SoCs of all sorts successfully hacked to run full Linux, I am disgusted that there is not a thing that can be done to this thing because of it's insane and secret bootloader system they designed from scratch so they could restrict it's potential use cases. It would be extremely useful if they would allow PoE (no brainier) and they even include Poe headers but provide no documentation on their use and further investigation showed it is not currently possible to network boot... What? Why? The bug that killed mine is well-known to the manufacturer. It is documented in big red letters at the top of their FAQ. "is your 3.3v rail dead? Then pi is dead. It happens sometimes from a short or spontaneously from nothing at all. We don't know the cause" The question is, why are they still shipping these known faulty units instead of recalling them? Poor service all around. I thought the entire point of the Raspberry Pi was to be open source Hardware with Unlimited customization ability. turns out it is probably the most closed down and unconfigureable of all the developer boards.

Pros: None because it is not working

Cons: I wish it worked.

Pros: This thing is incredibly compact. should be a lot of fun, tinkering with a linux system installed.

Cons: horrible shipping. thing just showed up in a padded envelope. if it works, i’ll be amazed