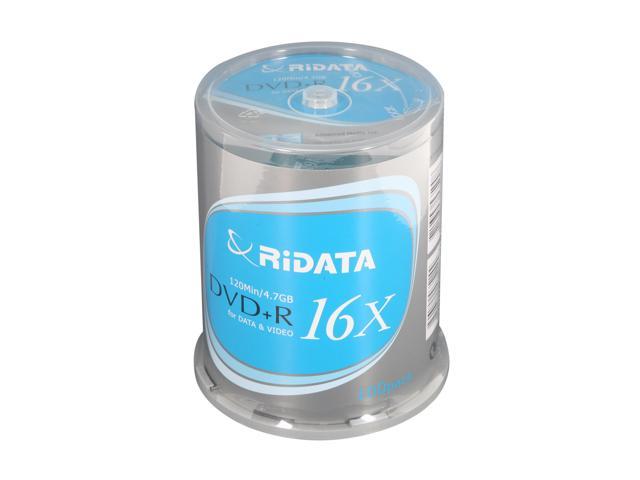 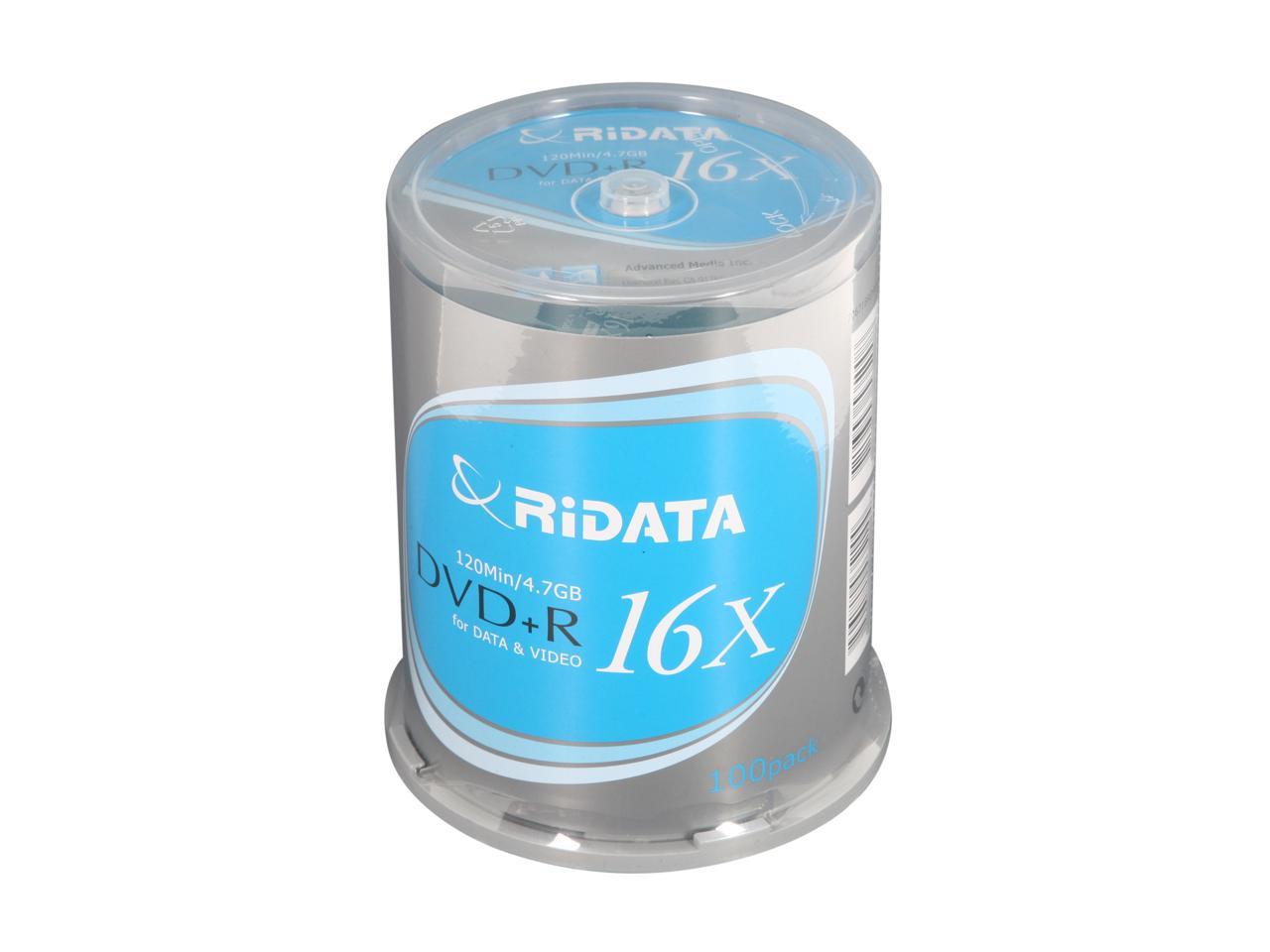 The RiDATA DVD+R disc offers 4.7 GB on a single disc to store your photos, movies, music and other digital contents.

The RiDATA DVD+R disc is compatible with most readers and writers. It offers read compatibility with DVD-ROM playback devices.

Pros: RiDATA... what else needs to be said. Premium quality that is accepted and compatible with 99%+ of the DVD burner manufacturers on the market. Label/logo not too intrusive.

Cons: Electric Blue face color, but is nice on the eye.

Overall Review: 4.7 @ full on speed = 100% success burns for me. I use CDBurnerXP (freeweware) and UltraISO with a Sony Optiarc with no coasters.

1 out of 1 people found this review helpful. Did you?
Michael R.
Ownership: 1 week to 1 month

Overall Review: For the folks complaining about the media not working. If you are burning DVD movies to this media, cut your write time down to 8X. This is pretty standard procedure folks. I never burn at 16X on any movie. Your burner is more accurate at lower speeds, and 8X is a good speed to burn at. I've used tons of these discs along with Memorex and Verbatim media and they all work well. You will get coasters our of any of them if you burn at a faster rate than your burner is capable of. Just because your burner says 16X, doesn't mean it's tracking true at that speed. I very, very seldom have coasters burning with these discs. Maybe one in 200 or so.

Pros: Inexpensive and good enough, this is media code: RITEK F16 Just like most of their media it is good for the money. Works well with Pioneer (8x), LG (8x) and NEC (6x - 8x) burners, It is OK for Lite-On (4x - 8x) and OEMs by them on lower speed. Faster burns produce excessive PIFs (Parity Inner Failures...) due to wobble and tracking errors. Yes, it is a Pro if are are fortunate enough to figure it out, if not you'll keep on making coasters.

Cons: Does not burn well above 8x due to dye imperfections / balance and tracking errors. But for the money it is to be expected. Not many so called experts understands much about laser technology and make false assumption the faster the better. Many people will try to push it to or above 16x, this is same like driving to work in 2nd gear, running the engine at 16,000 rpm and complaining the roads suck.

Overall Review: Each media has its own sweet-spot and most is at about 8x. Slower or faster speed may produce poorer results depending on Burner, its chipset / firmware. Hence it is normal for the same media burning nice on one and making coasters on another burner. I use 4 different burners (they are cheap) to avoid such cases. Try it at 8x, scan for errors, then adjust speed up or down to achieve the lowest error count. If in vain, use it on different burner and re-test for errors. It has never failed me yet! If you do not know how, learn it first before you post negative comments. Internet forums teach all that... and more. Learn how to recognize OEM burners, many companies do not make their own but outsource to the few that does. Hence it is futile to expect different results from the same manufacturer with a different OEM name sticker. I realize it sucks having to do all that, but the alternative is to use VHS tapes. And that sucks even more... !

Pros: The 100-disc cake box is okay, and I needed another one to store discs in. They're consistent. They give very good burns if you keep the speed down. (Average PIF 0.01, peak 2 on a full disc @ 8x burn) If you're not putting more than 3GB on a disc, they'll work fine at 16x.

Cons: It's hard to manufacture a bad single-layer disc, but RiTek managed to. Even no-name Chinese single-layer discs are usually usable. Discs are not capable of 16x. They work great at 8x, and start getting dodgy at 12x. Anything after about 3-3.5GB is barely readable, if at all. You know the discs are lousy when a Pioneer refuses to burn them full speed! These discs have been tried in the following burners, and give nearly identical results across all drives: Lite-On iHAS124W, (3x) Lite-On iHAS424B, (3x) ASUS DRW-24B3LT, LG WH14NS40 (old version), and Pioneer BDR-209DBK.

Overall Review: If you're not putting more than 3GB on a disc, these discs will work fine at 16x. This is because when burning the inner part of the disc, the actual speed of the data track past the laser hasn't reached critical speed yet. MID is RiTek F16. Purchase date: March 29, 2017

Pros: I have been buying these from Newegg for around 6-7 years. I can also say 6-7 duds out of well over 1000,very rare,,I use for data files,backup,videos/movies.Pricing is reasonable and rarely pay for shipping.Cheap,cheap,and I like the blue color,nice.

Cons: I don't get them for 14 bucks a hundred anymore.

Pros: Burned with no problems. I have 4 burners and all work with these. Phillips slows them down LG SONY LITEON work great. If I could get the same deal I would Buy more anytime. No problems with ridata. HP always have about 5 disks that fail. and that is not bad. Love the blue finish

Overall Review: If you have good software and a good computer you will have no problems. I use Nero, Copy to DVD, and with these programs they are great. I go through 200-300 A month. I use to copy data for others and need a good dependable product. I love newegg,

Pros: Used these to start making backups of all the TV shows I've recorded through the years.

Overall Review: Had a couple of coasters...but this was because a 5 year old DVD burner laser was going out. Was a hardware problem because had the coasters happen with some other brands.

Cons: Had a disc that didn't work. Most do.

Overall Review: Good price for the product, definitely will be buying again.