FREE SHIPPING
Sold by: Newegg
Shipped by Newegg
Newegg’s gift-wrap service is the ideal solution for making your gift special! Select your item as a gift, then add your message. Your gift will also be discreet with no prices being included on the packing slip.
Price Alert
Add To Wish ListFound on 31 wish lists 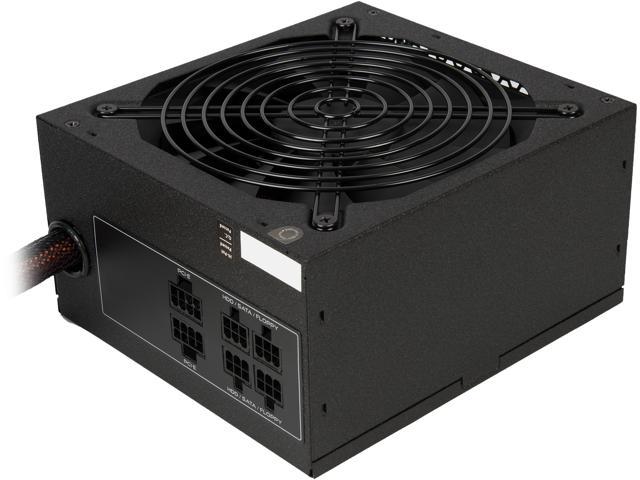 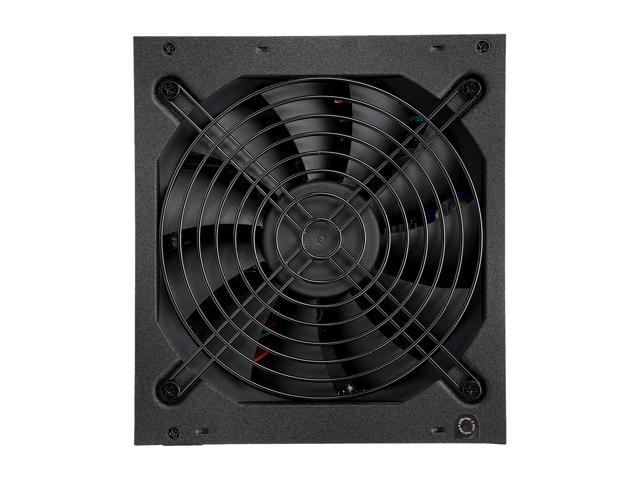 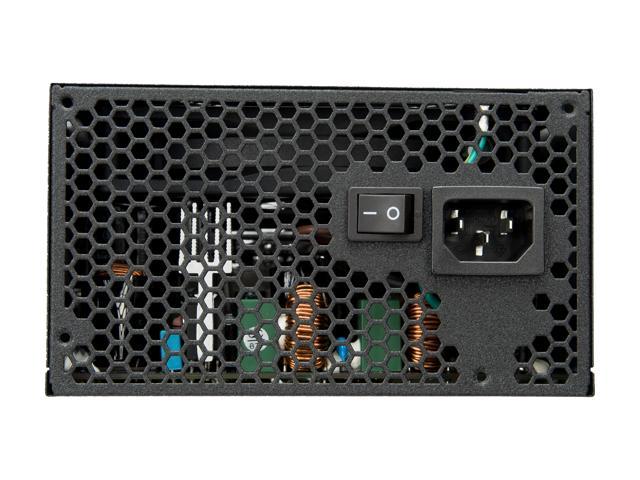 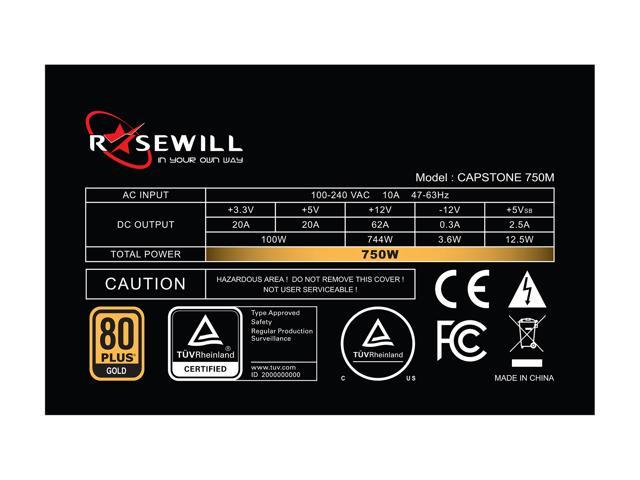 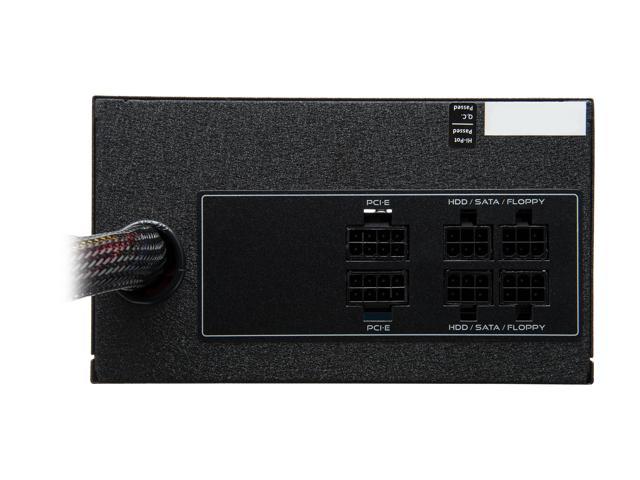 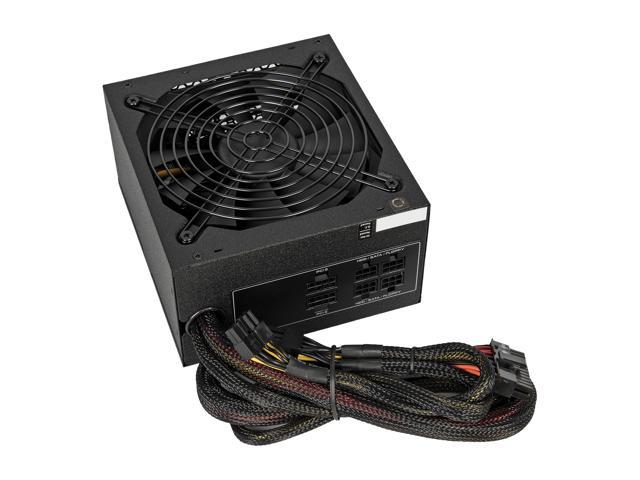 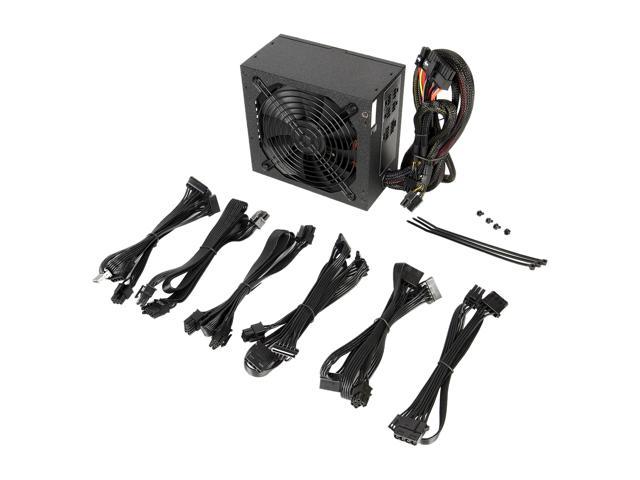 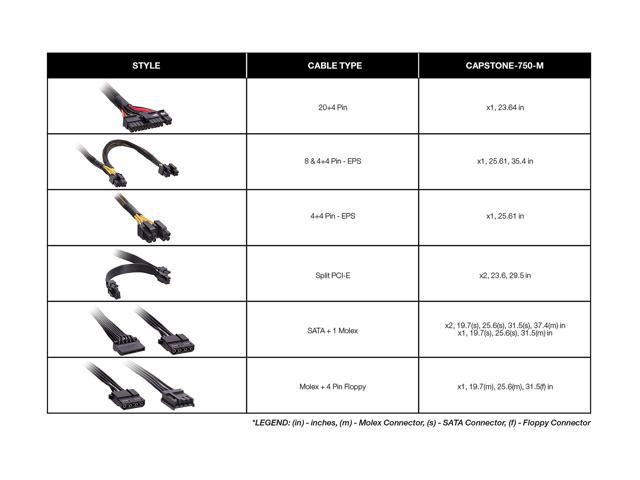 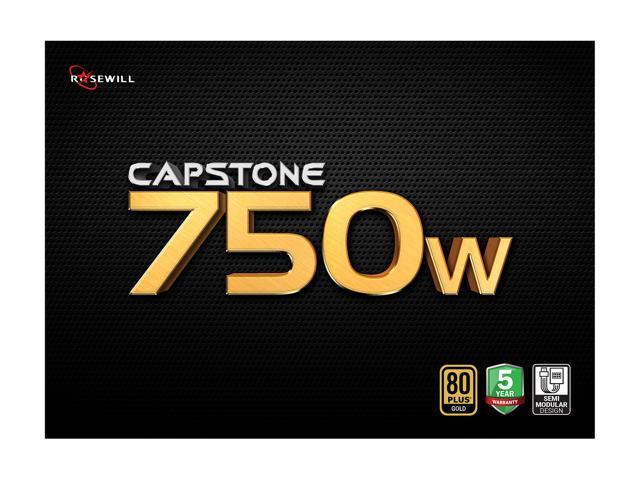 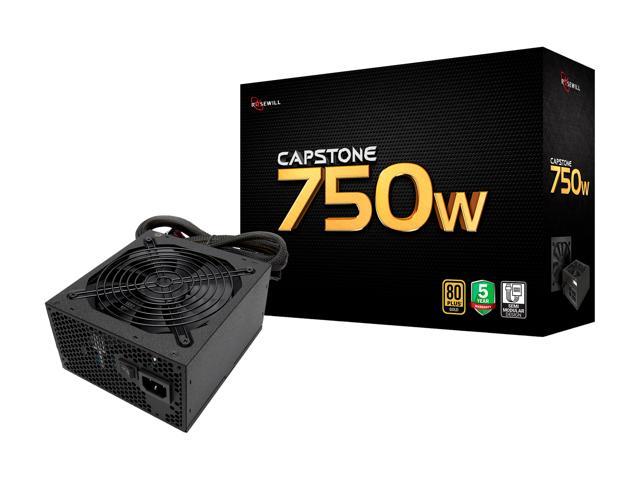 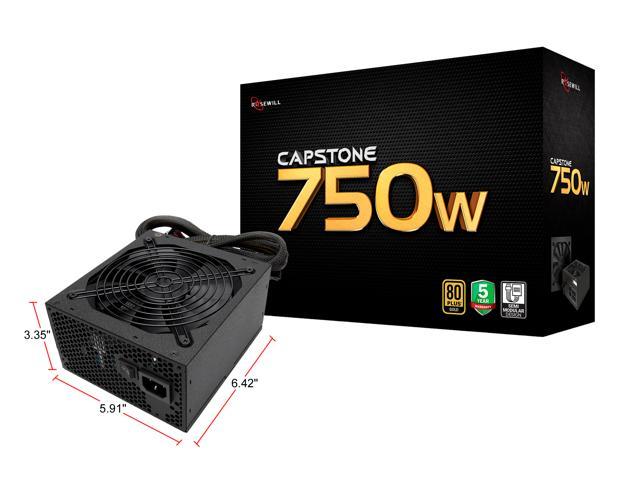 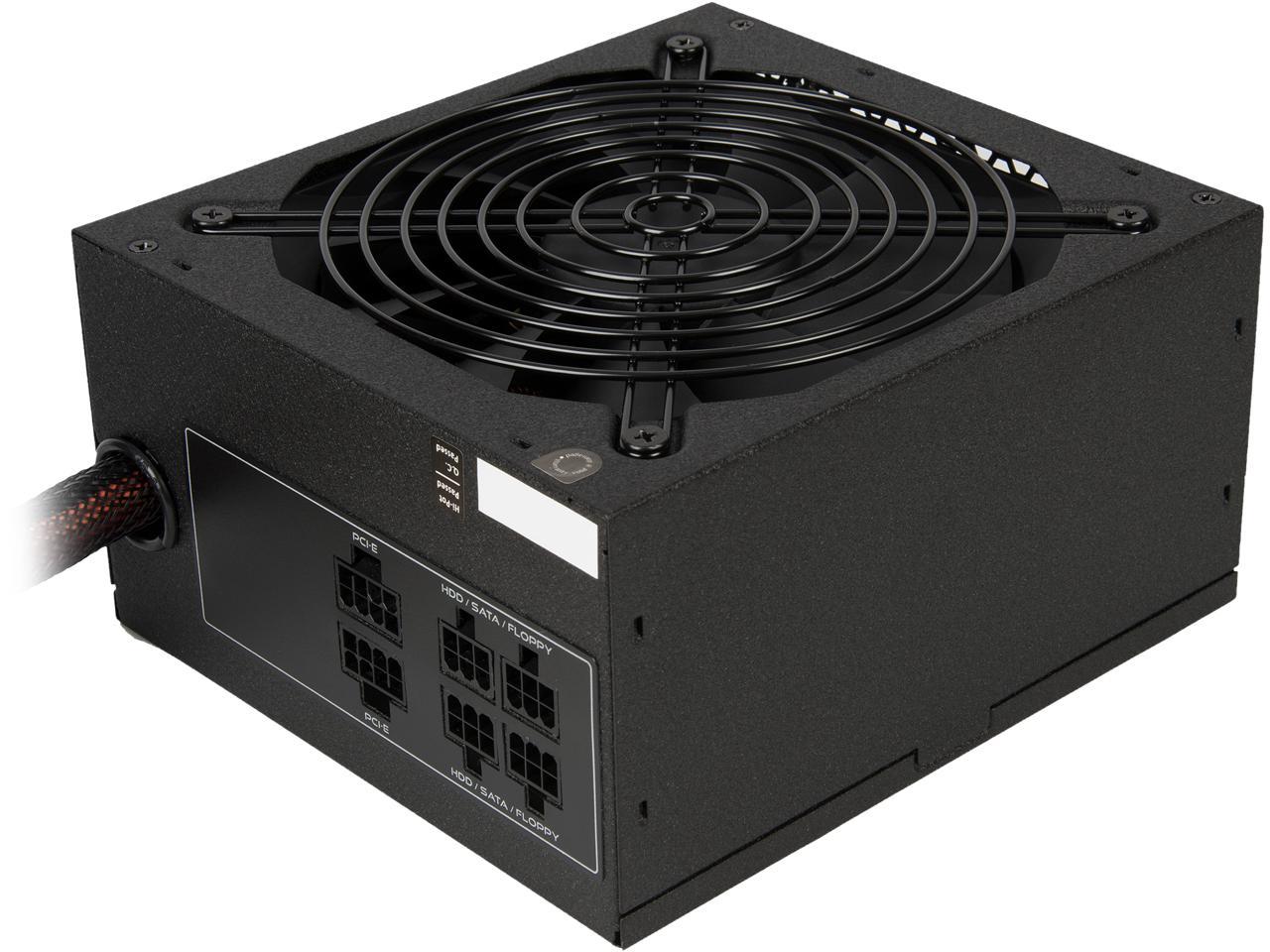 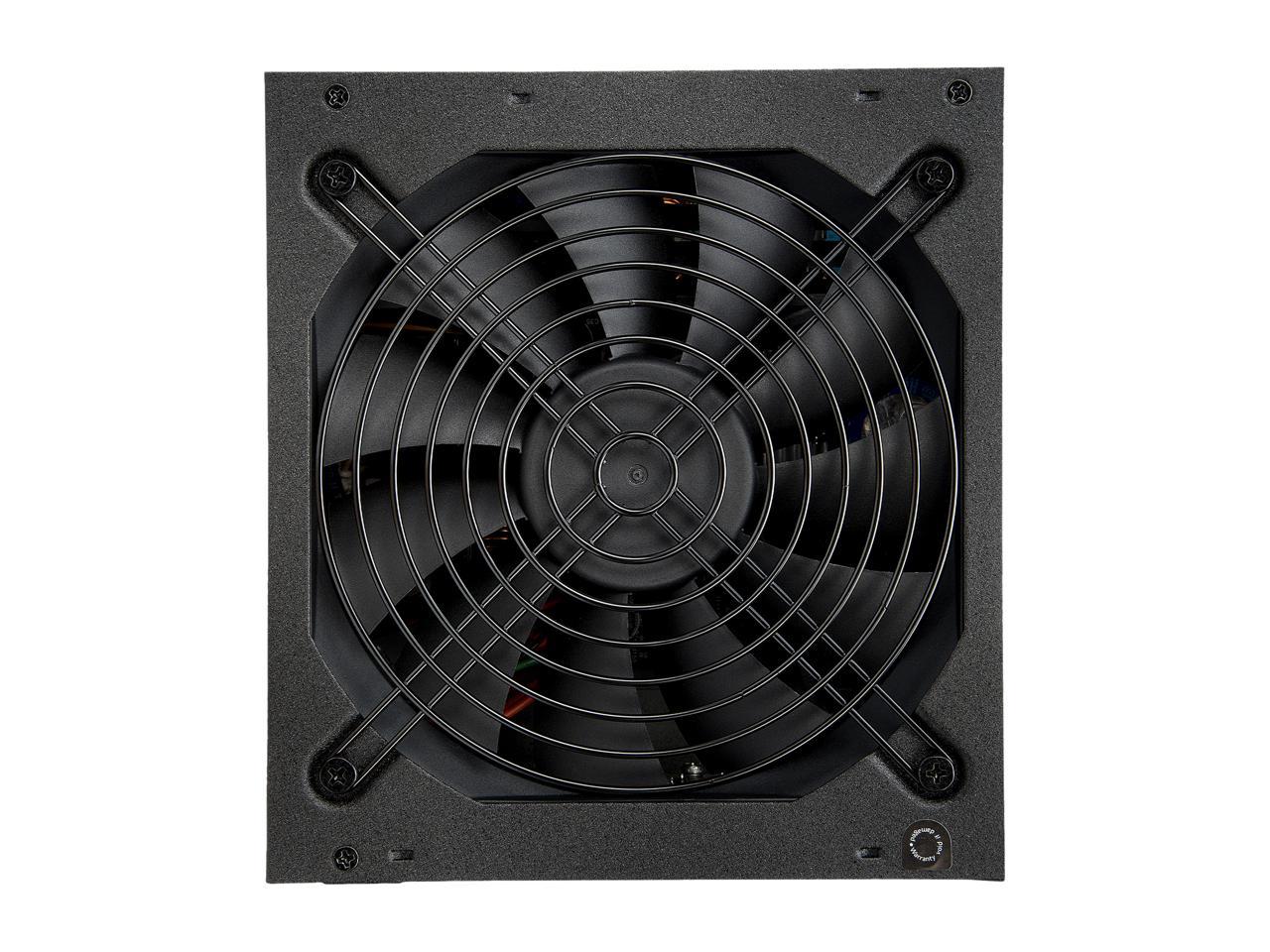 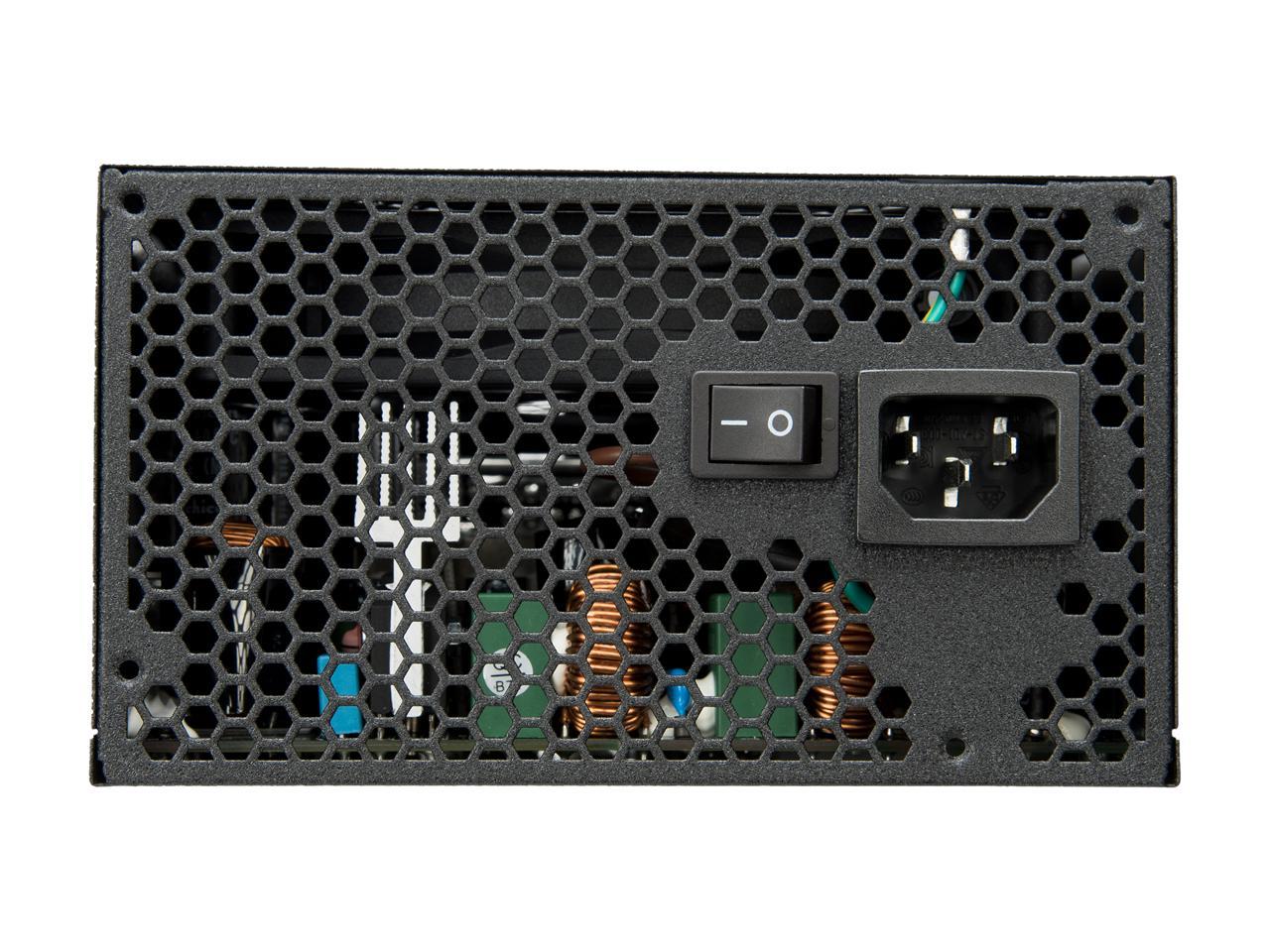 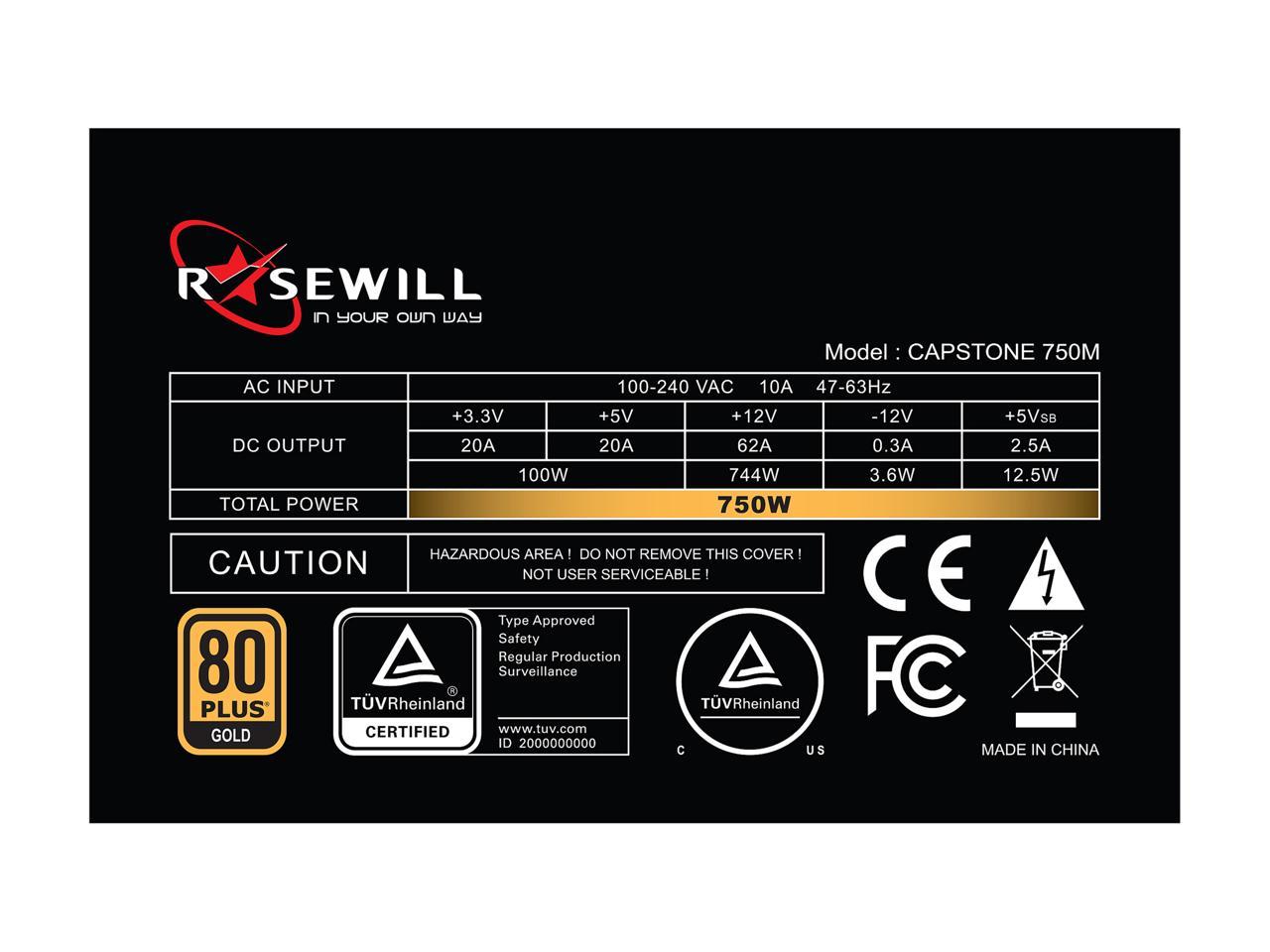 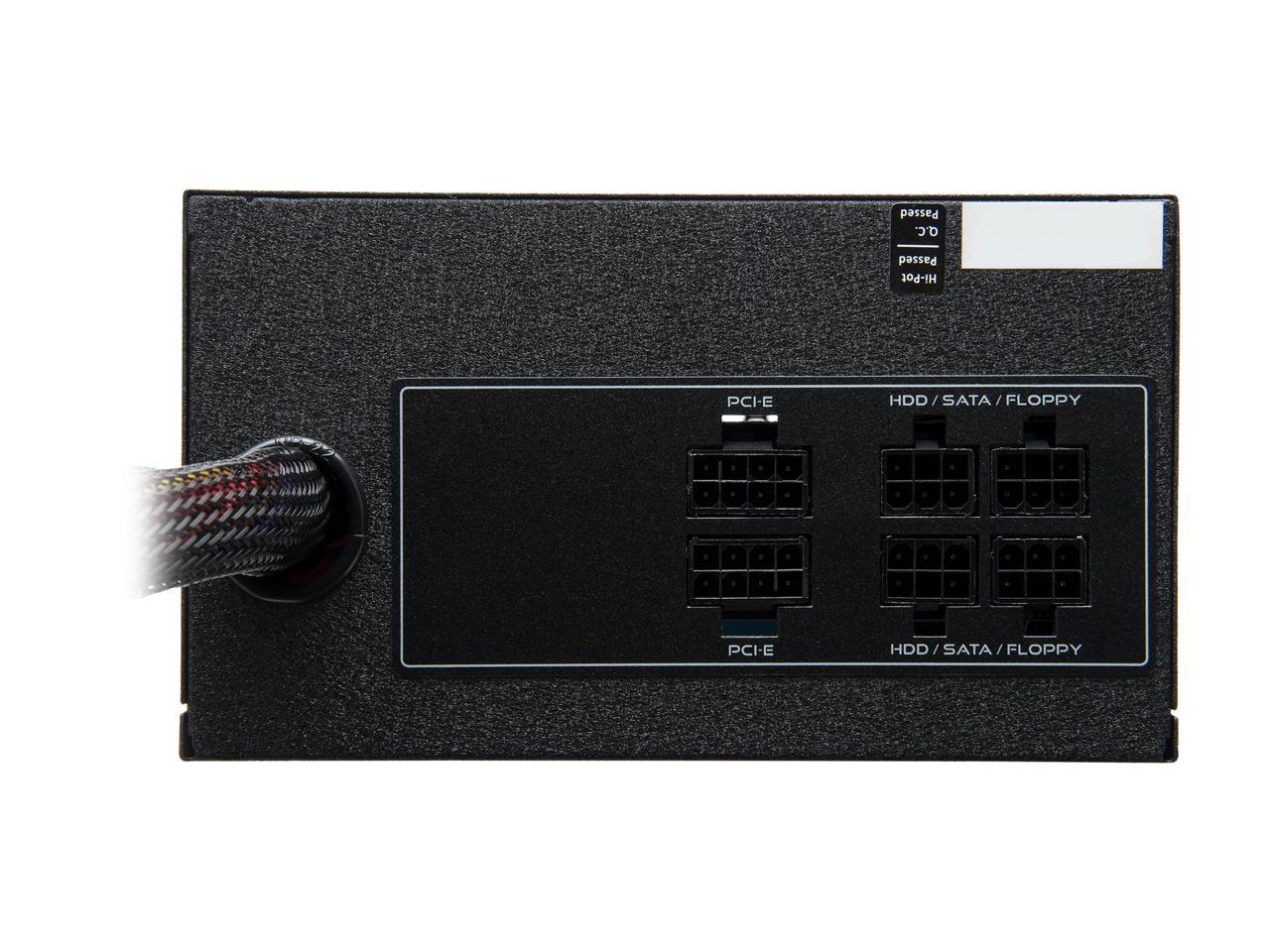 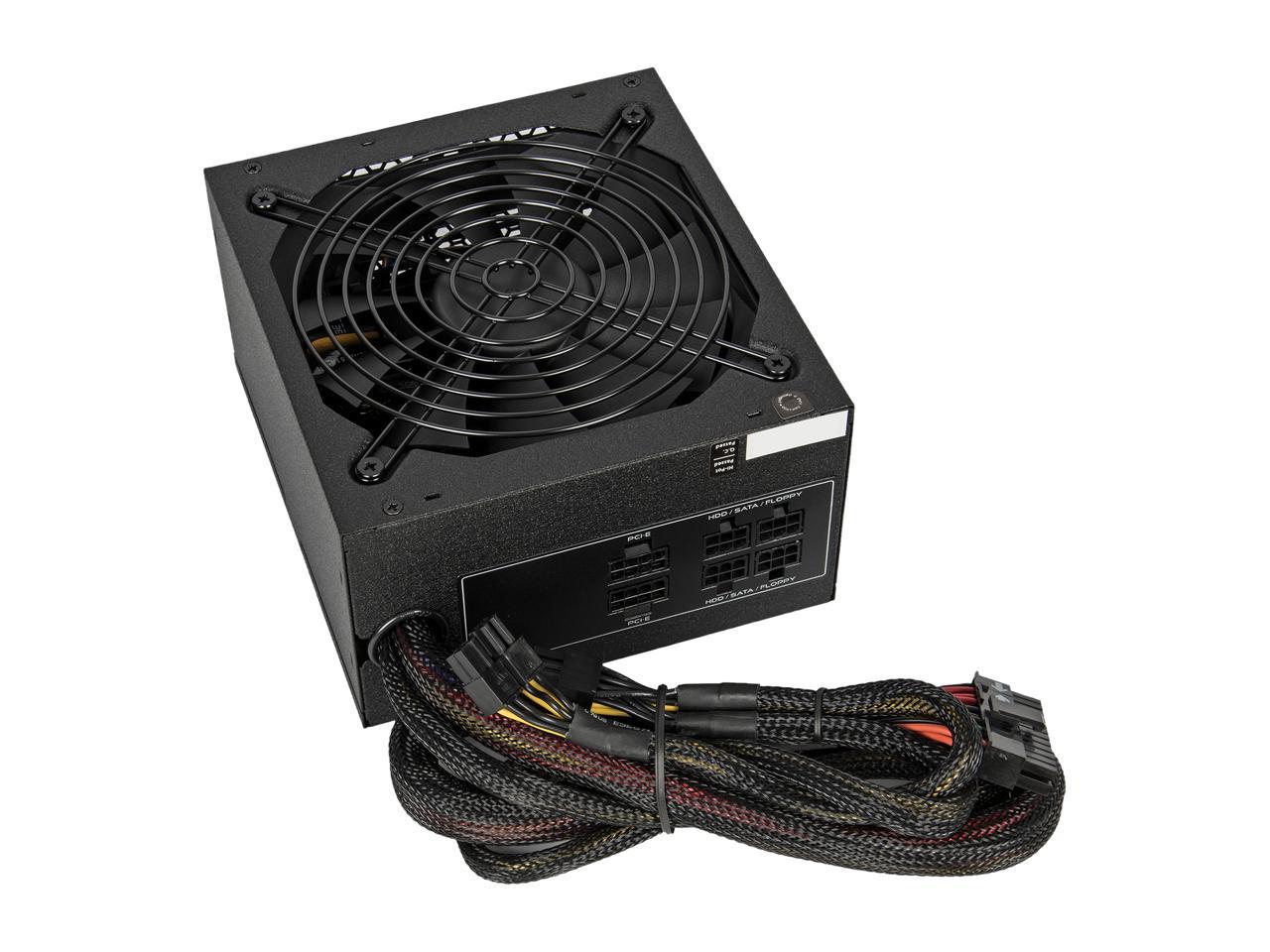 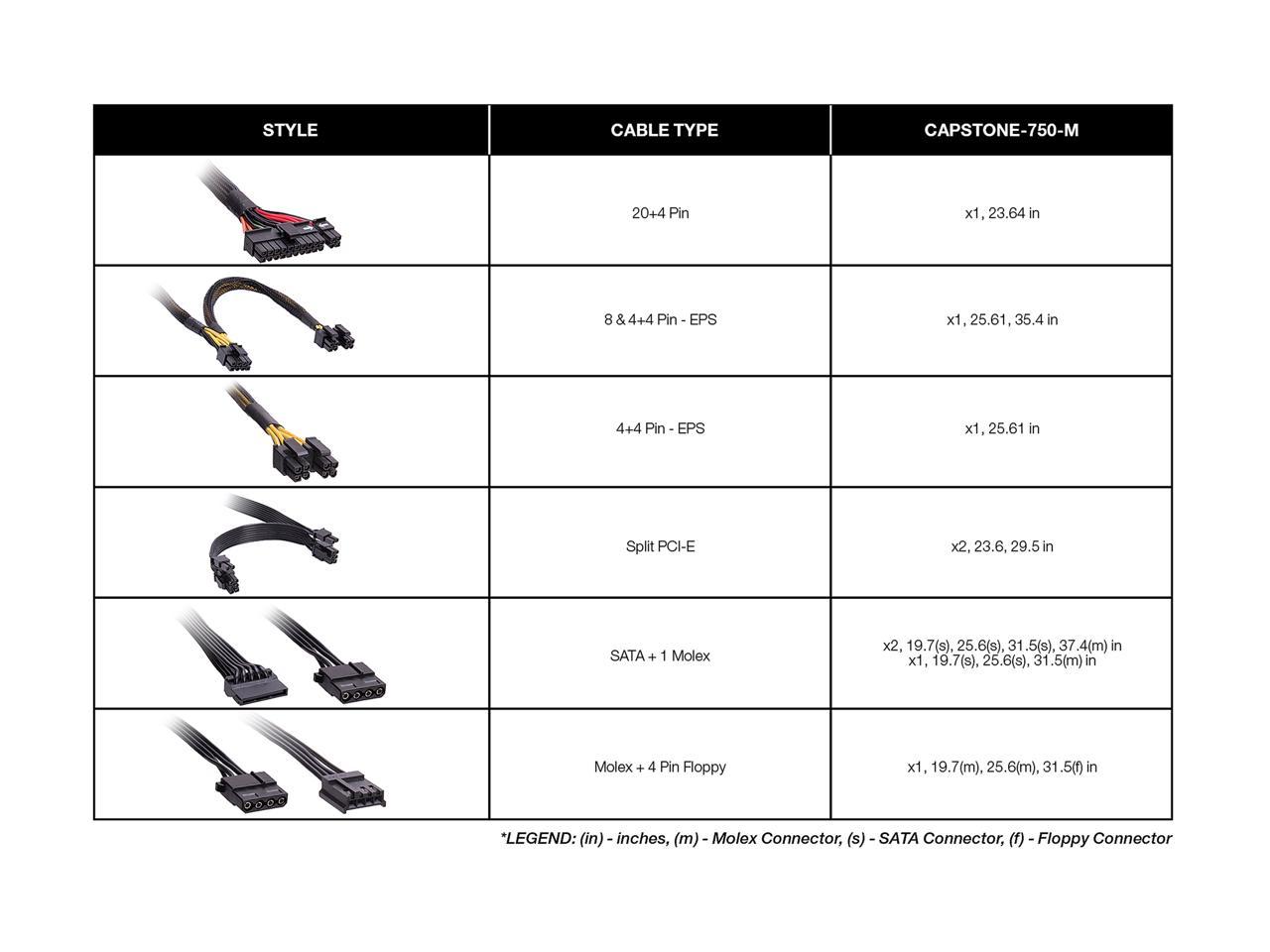 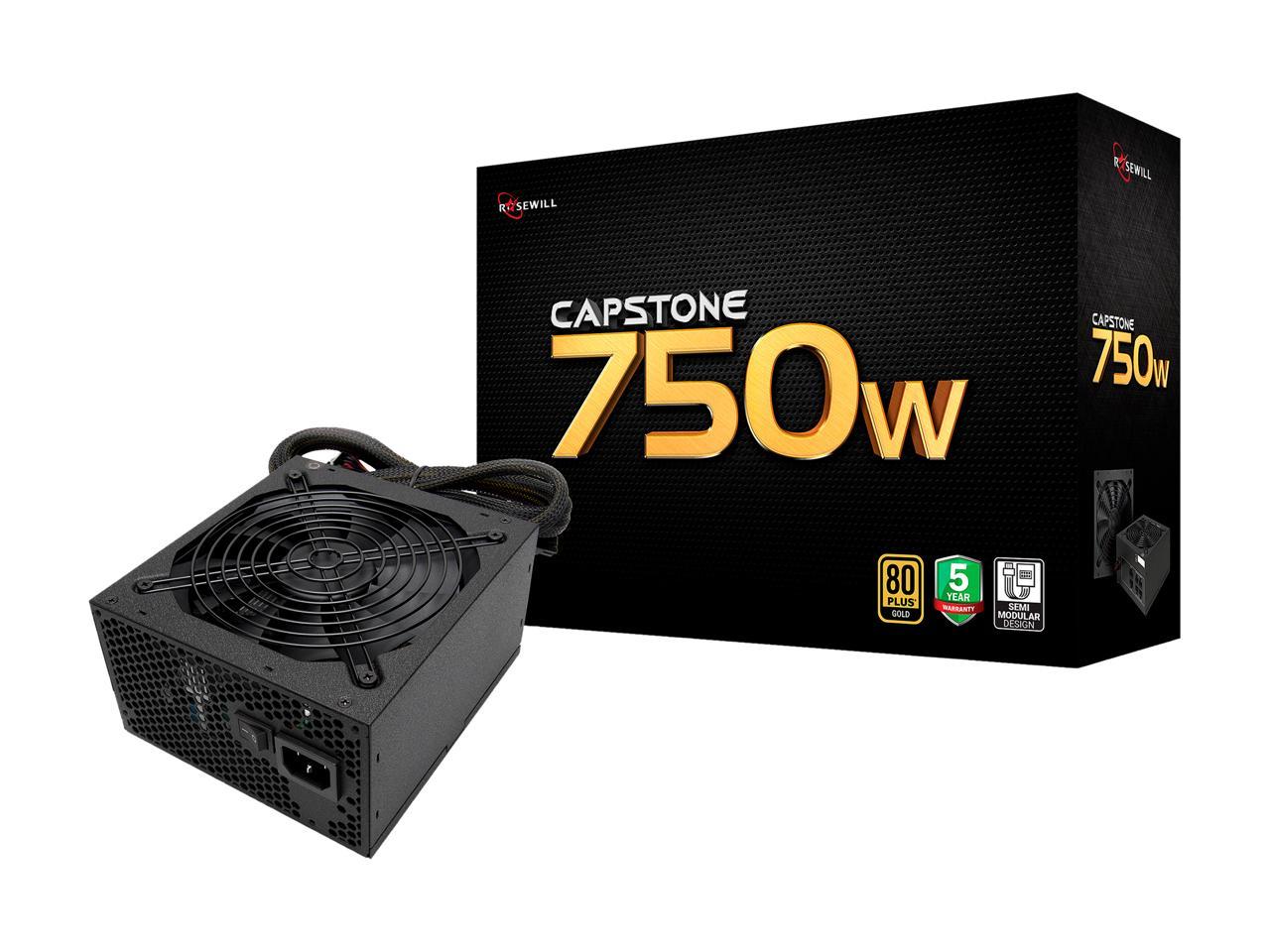 The Capstone 750 Watt power supply is 80 PLUS Gold certified and delivers up to 90% efficient performance under typical loads. This high form of efficiency saves energy, reduces heat in your system, decreases fan noise and prolongs the PSU’s life span so you can maximize your gaming activity. Capstone PSUs are backed by 5 years of warranty. Your power supply unit will operate according to its technical specifications within intended operating environments for the length of the warranty period. A semi-modular PSU design comes with only the essential cables pre-attached. This allows for some customization of additional cables, plus reduced clutter and better airflow compared to non-modular PSUs within your computer case or system. Pros: - Dead silent - Plethora of cables to handle almost anything you throw at it - 750 watts of 80 PLUS GOLD certified power - Cables are plenty long for cable management - Very nice, subdued look

Cons: - Both CPU 8 pin connectors are hard wired. It would be nice if at least one of them was modular, but this isn't that big of a deal - Modular connectors fit in the power supply both ways, but there is only ONE right way

Overall Review: When I first plugged in my computer, I thought the PSU was DOA because my PC refused to turn on. I unplugged everything, stuck a paper clip between the green wire on the 24 pin connector and ground to see if power supply was even running. Still nothing. I nearly packed everything back up and got ready for an RMA before I realized the fan actually was spinning. The power supply was so quiet I didn't even realize it was on! I later realized my dumb mistake: I had plugged in the modular connectors the wrong way. Somehow they went in fairly smoothly, but it didn't click. After reorienting them, everything went smoothly. It's a miracle I didn't destroy any of my components in the process. I guess I'm really lucky or Super Flower (the OEM for this power supply) is an amazing manufacturer. So a bit of fair warning to anyone buying this power supply...read the instructions clearly. Make sure your modular connectors "click" in. The notch/clip points downward.

Pros: manufactured by superflower gold rated at 50C semi modular fan changes its speed based of temperature 1,200rpm 140mm fan manufactured by global fan excellent voltage, ripple, stability, and strength strong 62amp single 12v rail meshed covered cables the mesh is loose enough to allow for easy flexing of the cables but tight enough to protect and prevent pinching of the wires affordable yet high quality silicon covered ports it uses all high quality japanese capacitors manufactured by nippon chemi-con. it has a nice matte, black finish. it doesn't have any logos or graphics on the sides. the cables are of adequate length for any mid size and lower atx case. i personally have a cooler master haf xb evo and had no cable length issues what-so-ever. lacks gimmicky features like "corsair link" and "echo mode"

Overall Review: i purchased (from another major online retailer with free prime shipping) this unit (750-m capstone) after i read a few reviews from jonnyguru and techpowerup that reviewed this psu. they praised it highly and recommended it and finding out who its actually manufactured by it had me sold. don't let a house brand fool you. even though rosewill is newegg's brand, this unit is not produced by newegg. rather, like corsair, evga, antec, cooler master, and such, its outsourced to a third party oem. this particular unit, and the entire capstone series, both modular and non, is manufactured by superflower. superflower is a top tier power supply manufacturer that produces some of the best power supplies you can get. you will find many of their units housed in brands such as antec, evga, pc power and cooling ,and the like. its cheap not because of its quality, but rather because its a rebranded oem. it's quality is superb and equivalent in what you will find in more expensive units. since rosewill out sources it to a oem they are able to sell them at a cheaper price and they pass the savings onto us. the oem saves money because they get a fixed number of units they have to produce, don't have to worry about producing to many, don't have the worry about the packaging, customer support, warranty, and distribution. rosewill saves money because they don't have to worry about manufacturing and research and development. other companies like corsair and evga do the same exact thing as rosewill, except they don't pass on the savings and charge the same premium as if you purchased it by the oem manufacturer themselves. coming over from a corsair ax850 to this I'm extremely impressed and pleased. I'm actually am more impressed with it than what I was with my corsair. it's is one of the best I have ever owned. I will definitely will look at rosewill again for my next psu purchase and highly recommend the capstone series to anyone looking for a rock solid psu.

Pros: The PSU runs quiet and fits nicely in my HTPC case (SilverStone GD05B) with only a few of the modular cables utilized. I have an EVGA GTX 770 Superclocked running stable with no issues.

Cons: I was very happy with the PSU until it failed after 3 months. Received a replacement from Rosewill within a week, though was told that I had to pay for the shipping label. I spoke with customer service and they provided me with a free label as a one-time courtesy. Personally I don't believe I should pay at all for a defective product, so hopefully the replacement doesn't fail on me. It's been 2+ months and it seems fine.

Pros: Price, got mine for under $100. Solid, high quality PSU. 80+ Gold certified. Stable voltages across all rails with absolutely no ripple. The OEM of this unit is Super Flower.

Cons: No cons here. I didn't have an issue with screws like other reviewers. Yes, you might need a screwdriver. Just don't be an idiot and cross thread your screws.

Overall Review: Rosewill? That is the question. Just know that this PSU ranks up there with the highest quality PSU's and belongs in the high-end category. Got mine for under $100, and at that price, it would be foolish not to buy it.

Cons: Ketchup and Mustard 24 pin and 8 pin cables. All the modular cables are solid black.

Overall Review: This unit is now made by Andyson (not superflower or enhance). It's based off the Andyson GX platform which has a favorable Vietnamese review. Peeking inside the chassis I see some polymer solid caps and some nippon chemi-con brand electrolytic's. Primary Cap is a Hitachi rated for 105c. Appears to be mostly quality components. 5 year warranty is nice. I'll probably only stress this thing to 50-60% tops with a single Vega56. I upgraded from a 500w Rosewill Valens that ran great as well. I know people like to go EVGA and Seasonic but I have had good luck with Rosewill PSU's.

Pros: I bought this thing in 2012, it's been working non stop since then in a rather dusty environment. Silent and the noise level stayed the same. Nothing more to say, it's a PSU. You just put it in there and then forget about it, it's supposed to keep working. This one does just that.

Overall Review: One of the few original components still inside the box. Since 2012 I replaced the graphics card twice (both killed by dust) and several fans including the CPU fan (again because of the dust). I also replaced the original HDD with a SSD and another HDD of higher capacity. Still there: the CPU (i7-3770) and 2 sticks (8G each) of G.SKILL Trident X memory

Cons: The Motherboard 4x Pin connector is way to short. And go figure it's a built in cable. It's not an issue if you don't mind running the cable in front of your motherboard but if you want to run it behind the mb and come out on top, the cable is to short. I tried this in both my Phanteks Enthoo Pro and my NZXT Guardian 921 and it's just to short to run it or hide it anywhere, you literally have to run it in front of the motherboard. If they would have made it an extra 2 inches everything would be perfect.

Overall Review: Great PSU and I would suggest picking it up if you have a smaller Micro or Mid tower case. If you have a full tower don't buy this if you care about cable management.

Pros: Great product! This psu is quiet, connections are quick and easy. Had this product for more than a year and is holding up great!

Cons: The only con with this product is that the 6pin pci express connectors have a double connector on one cable so it makes the cable less flexible since the wires are pigtailed off one connector. Other than that no issues.