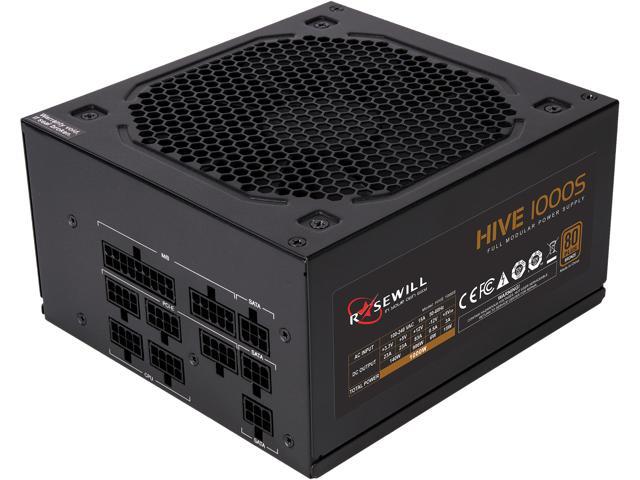 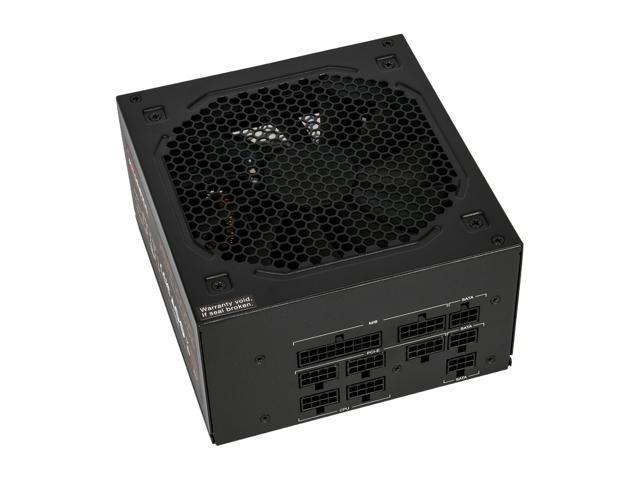 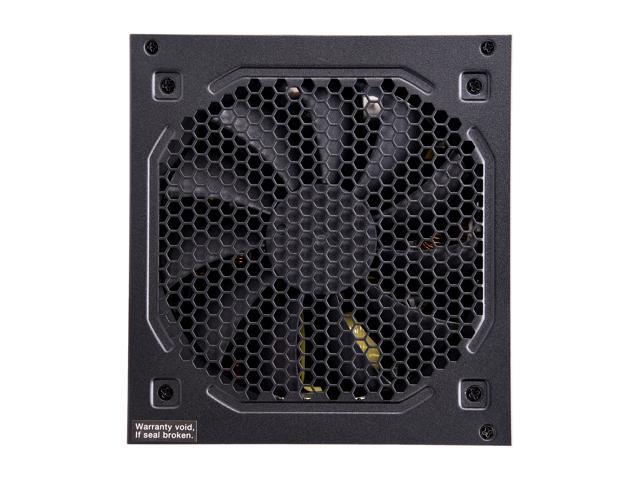 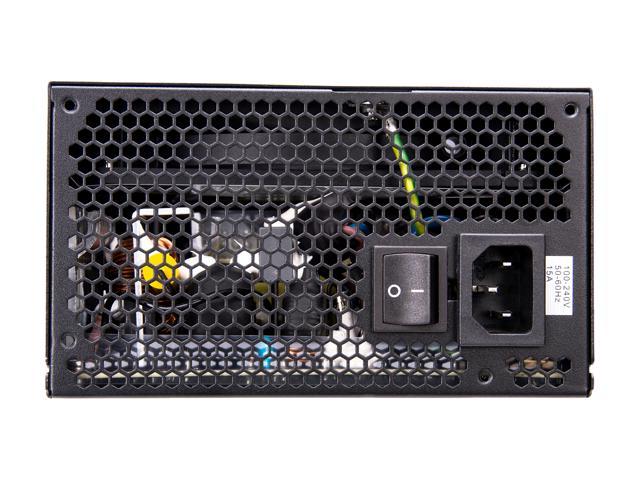 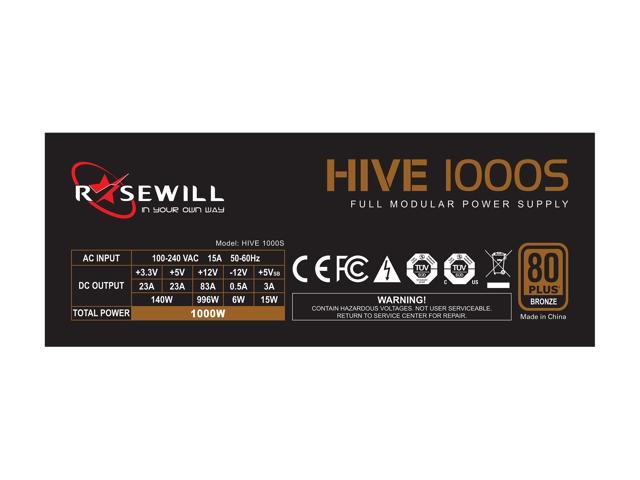 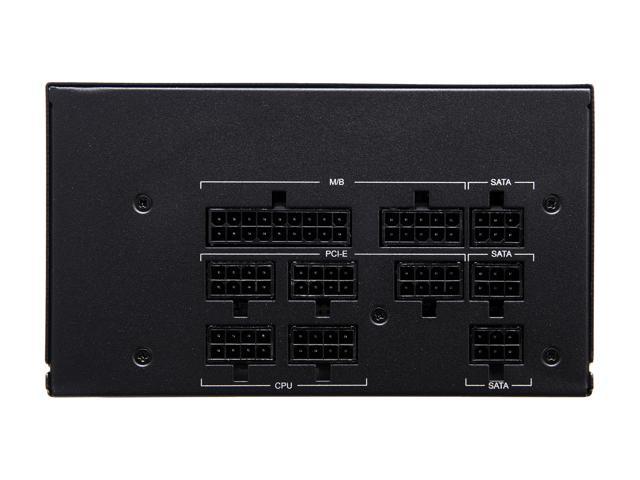 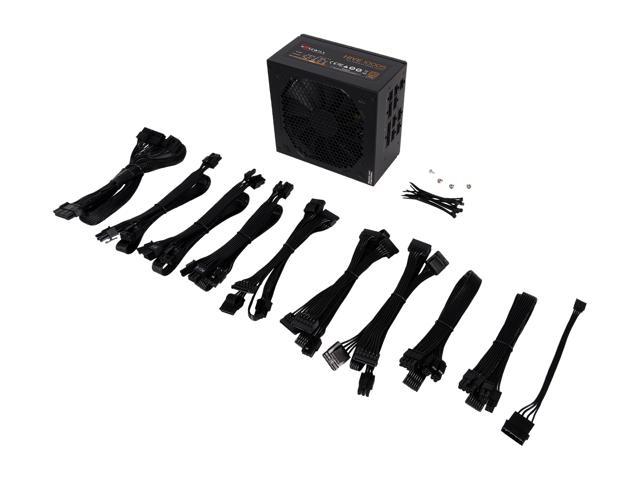 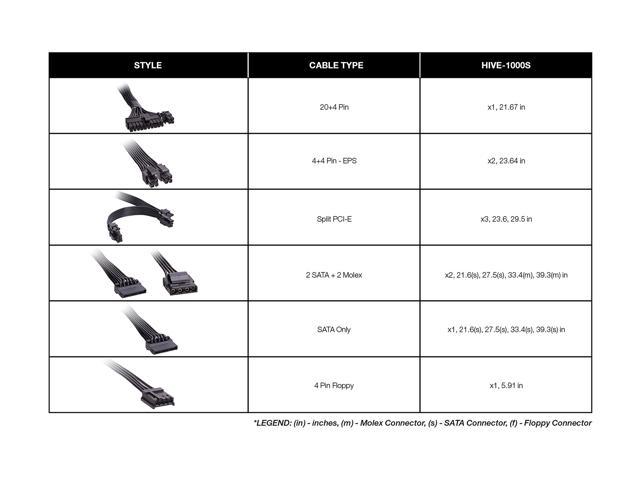 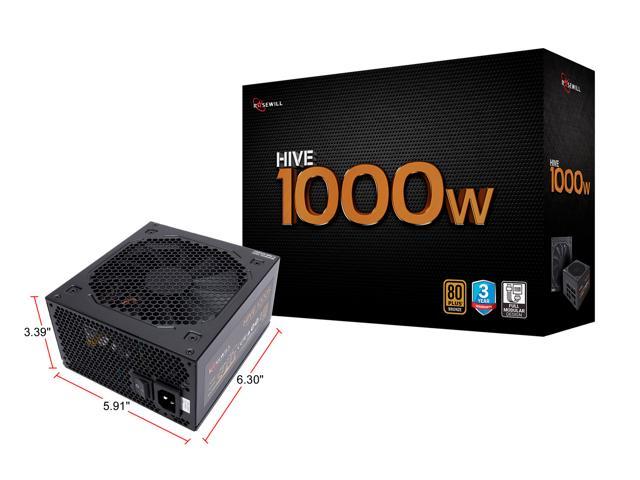 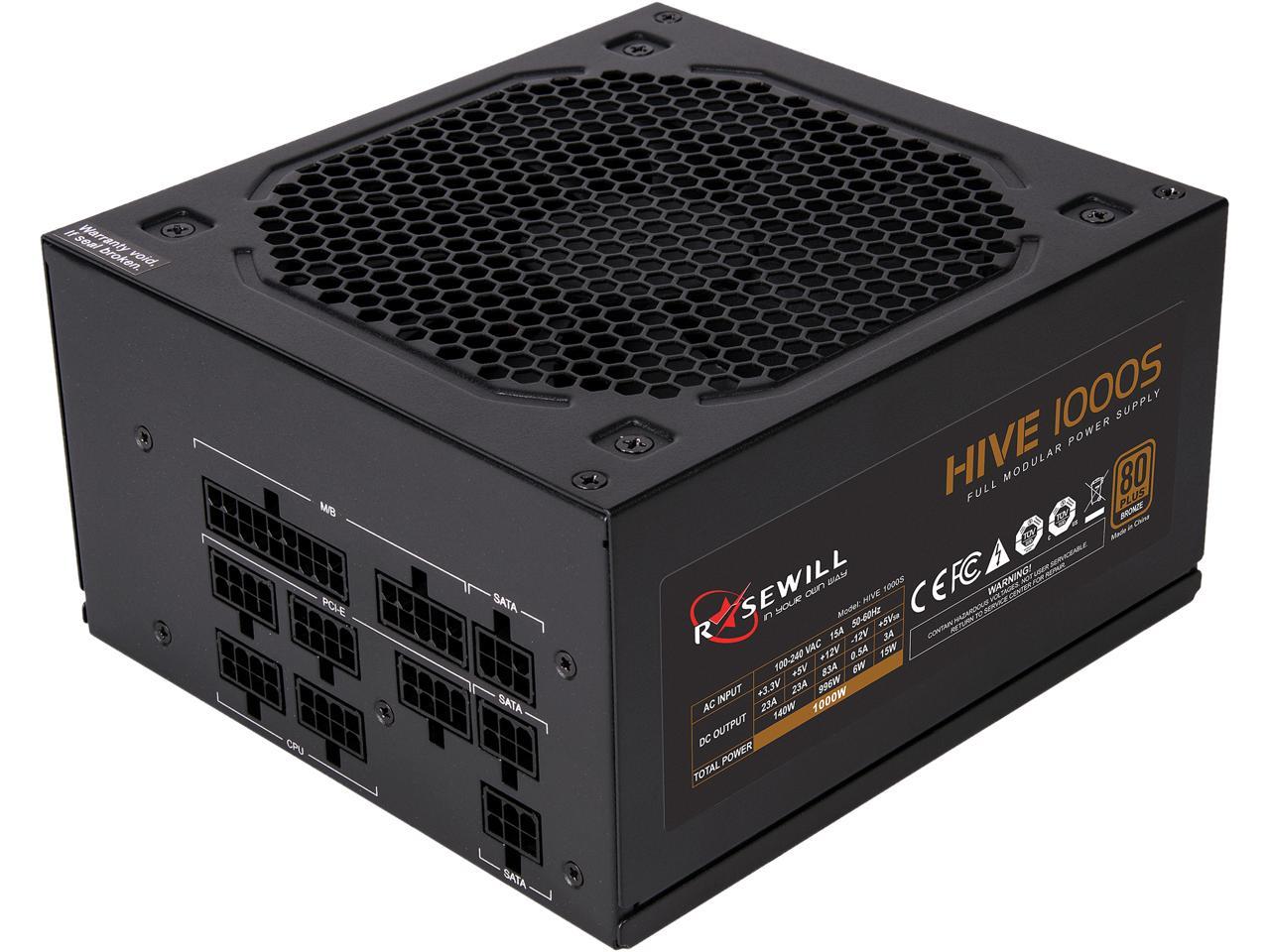 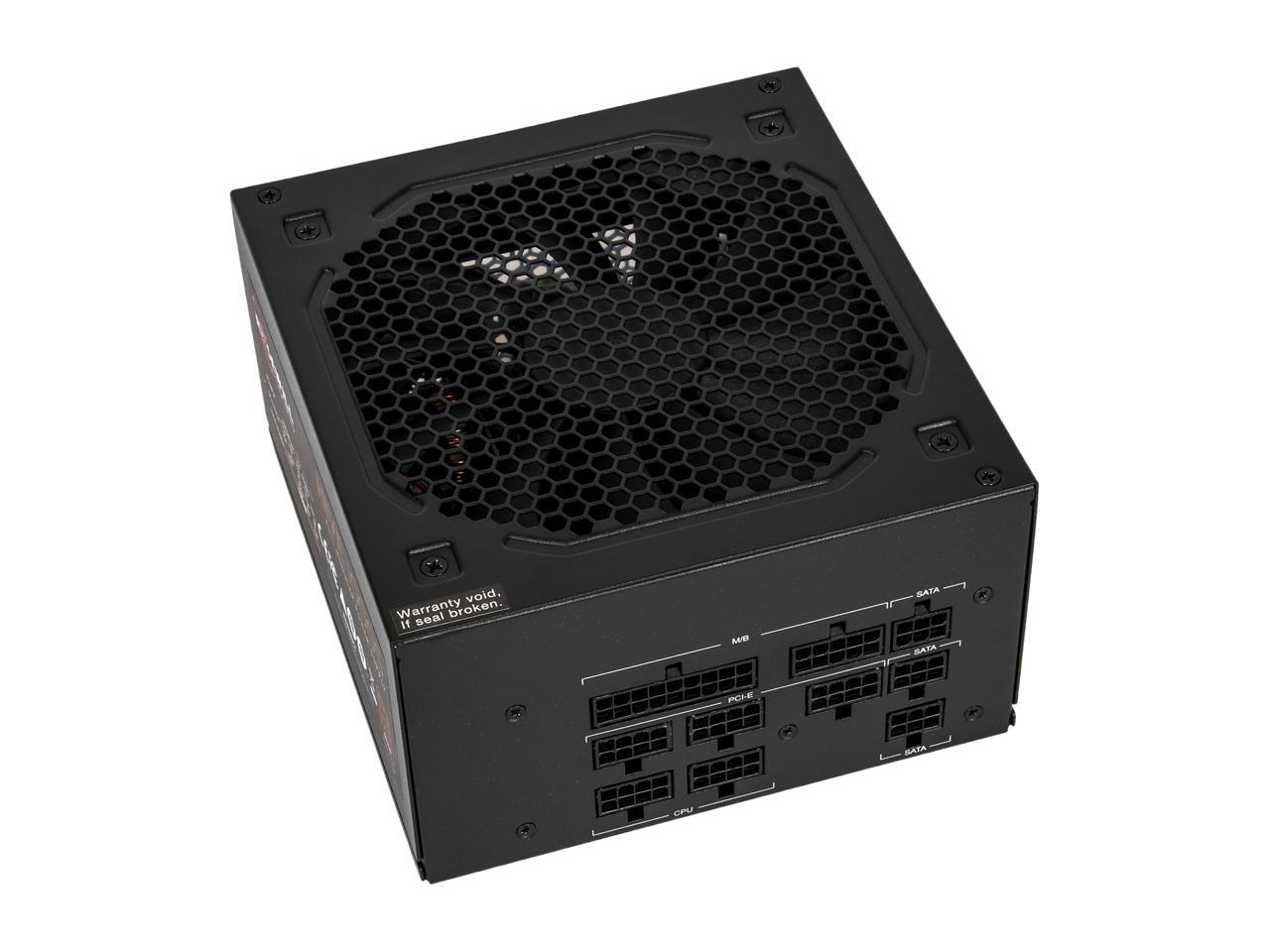 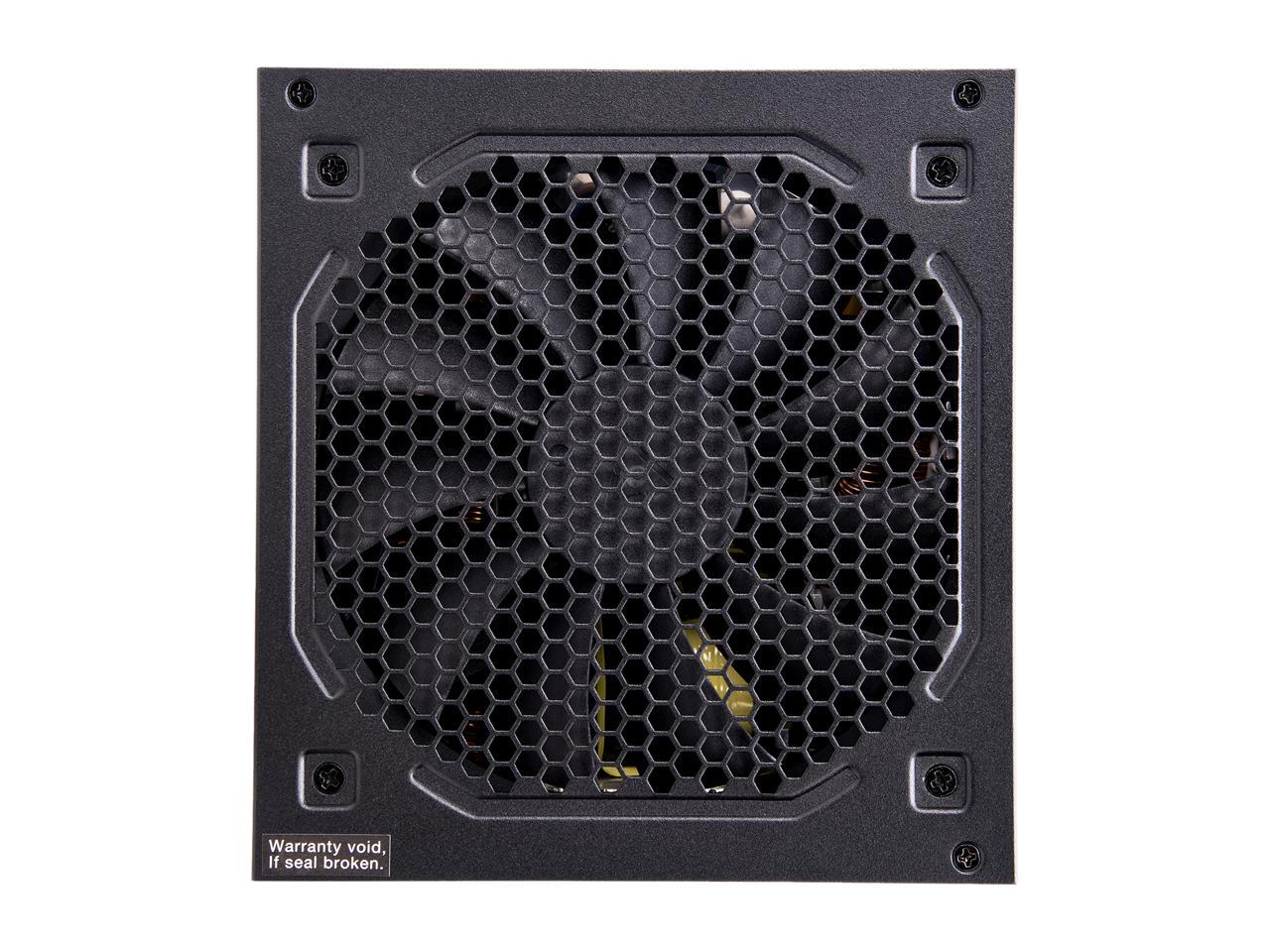 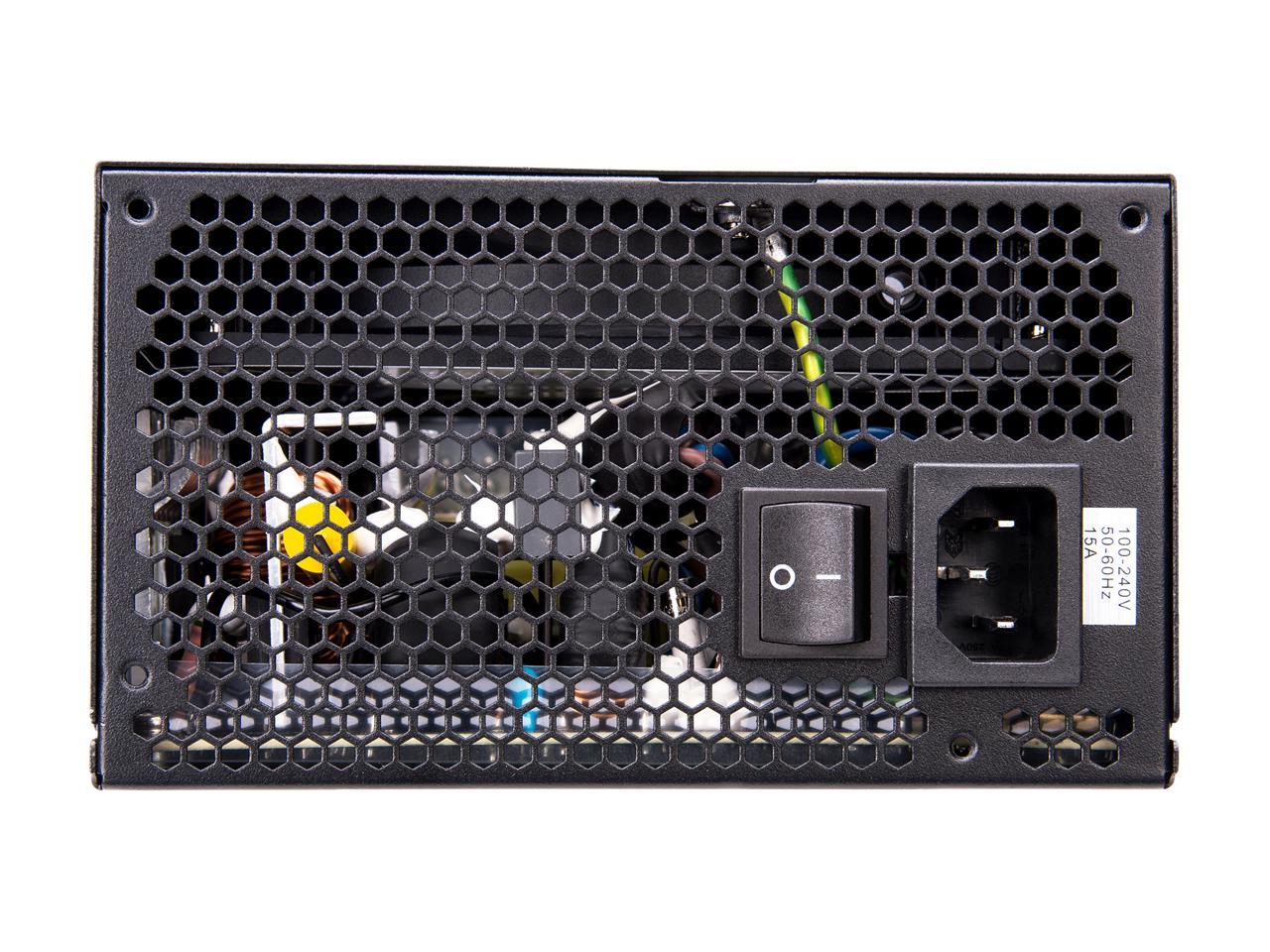 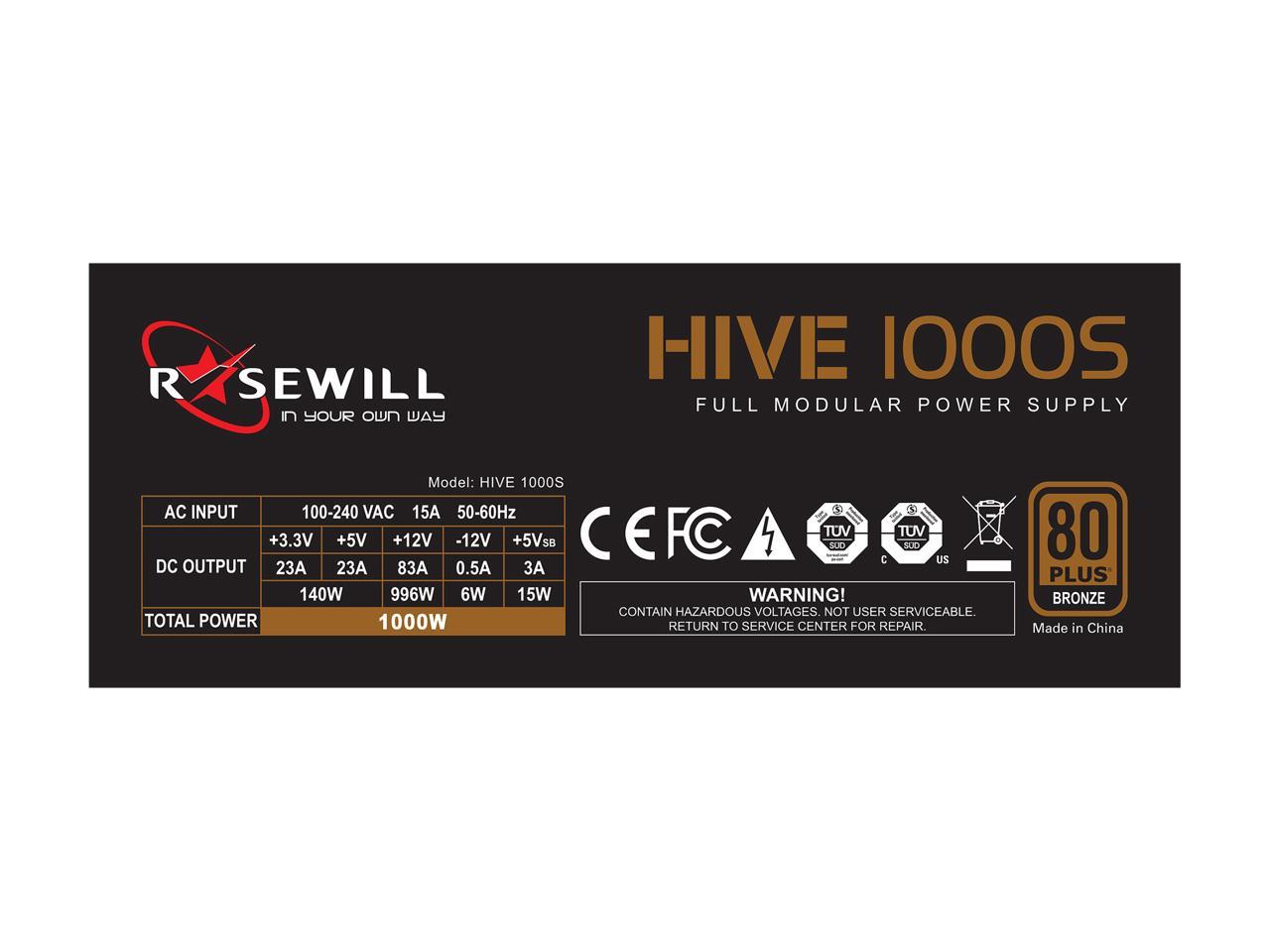 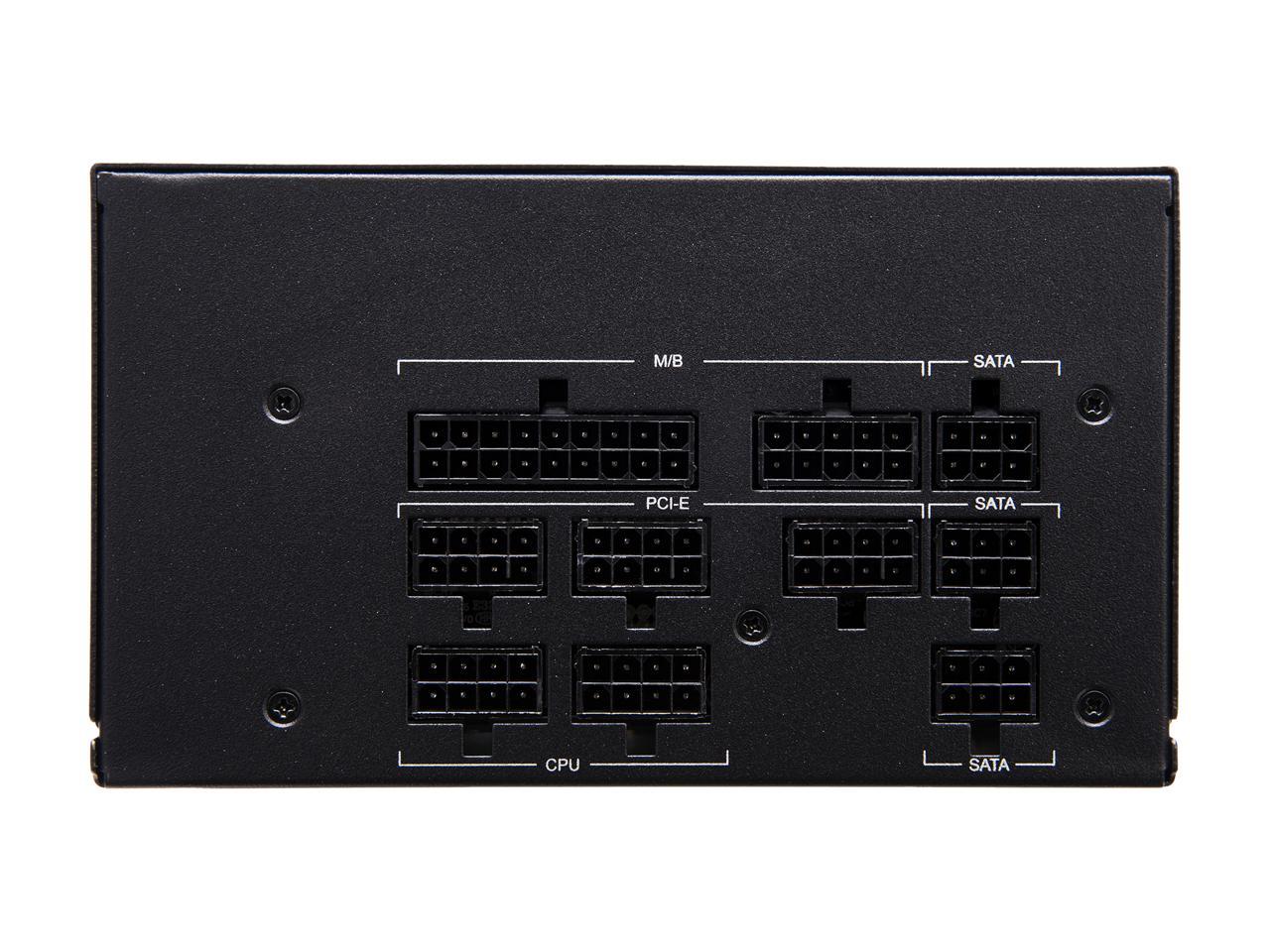 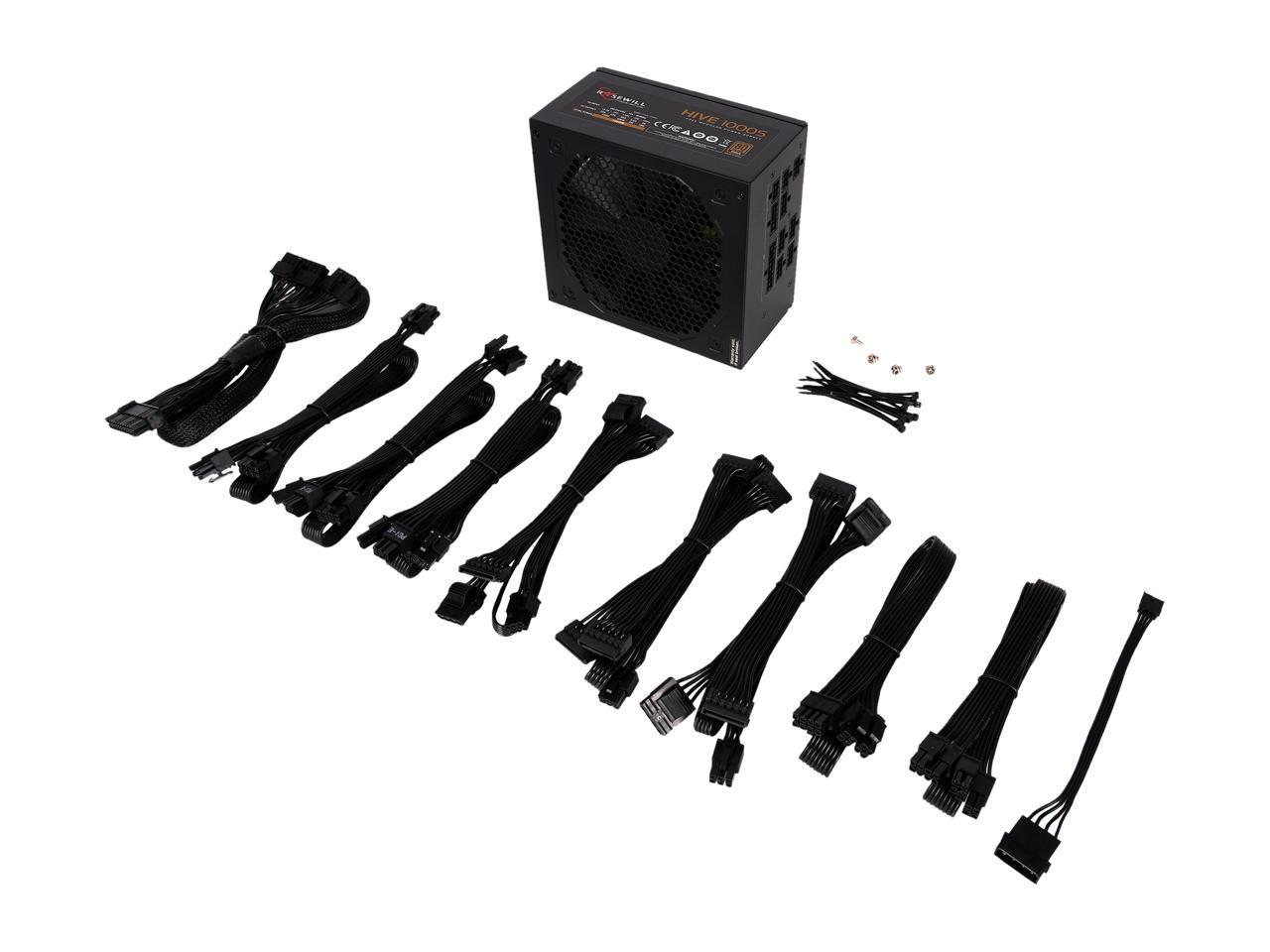 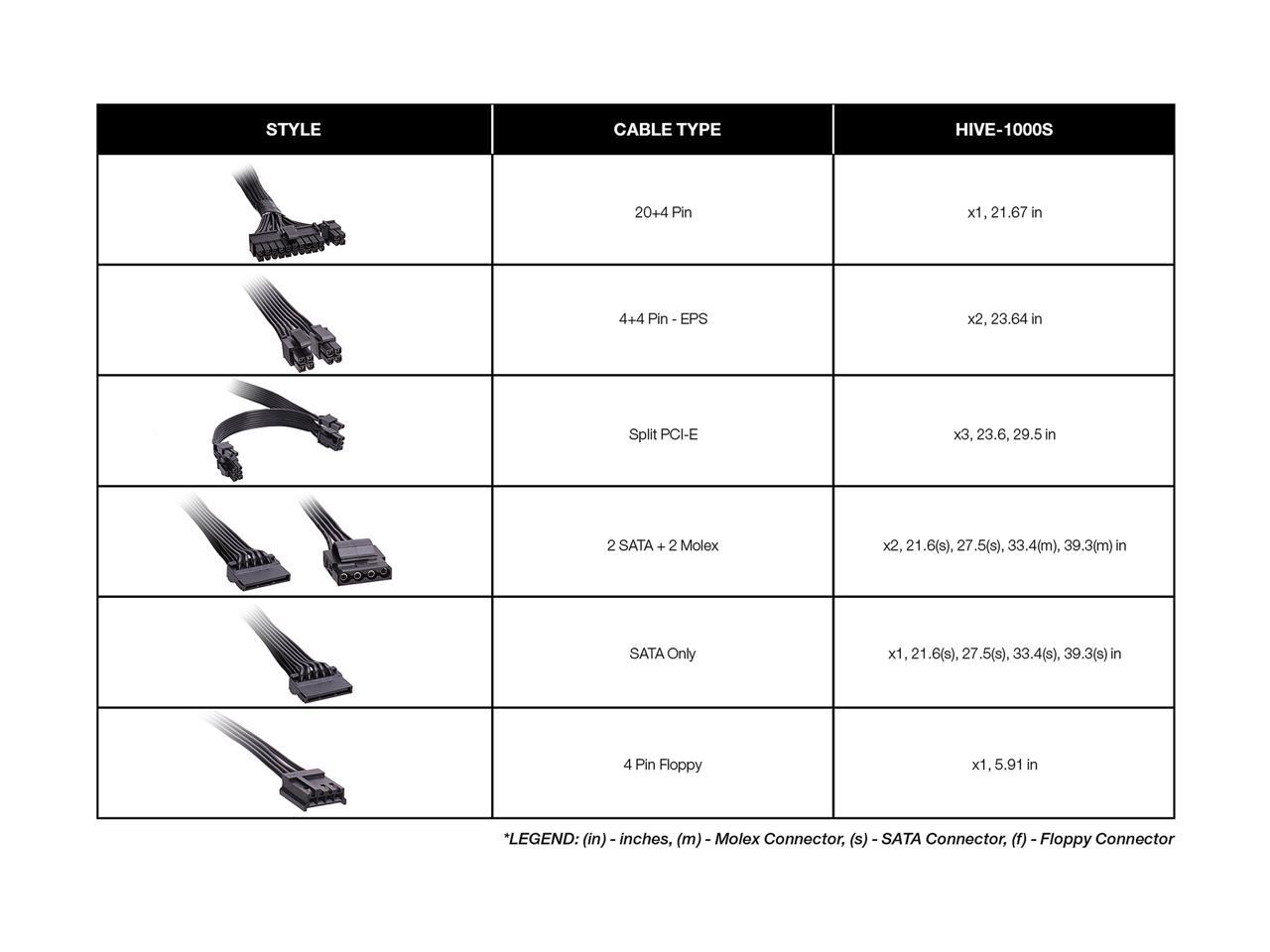 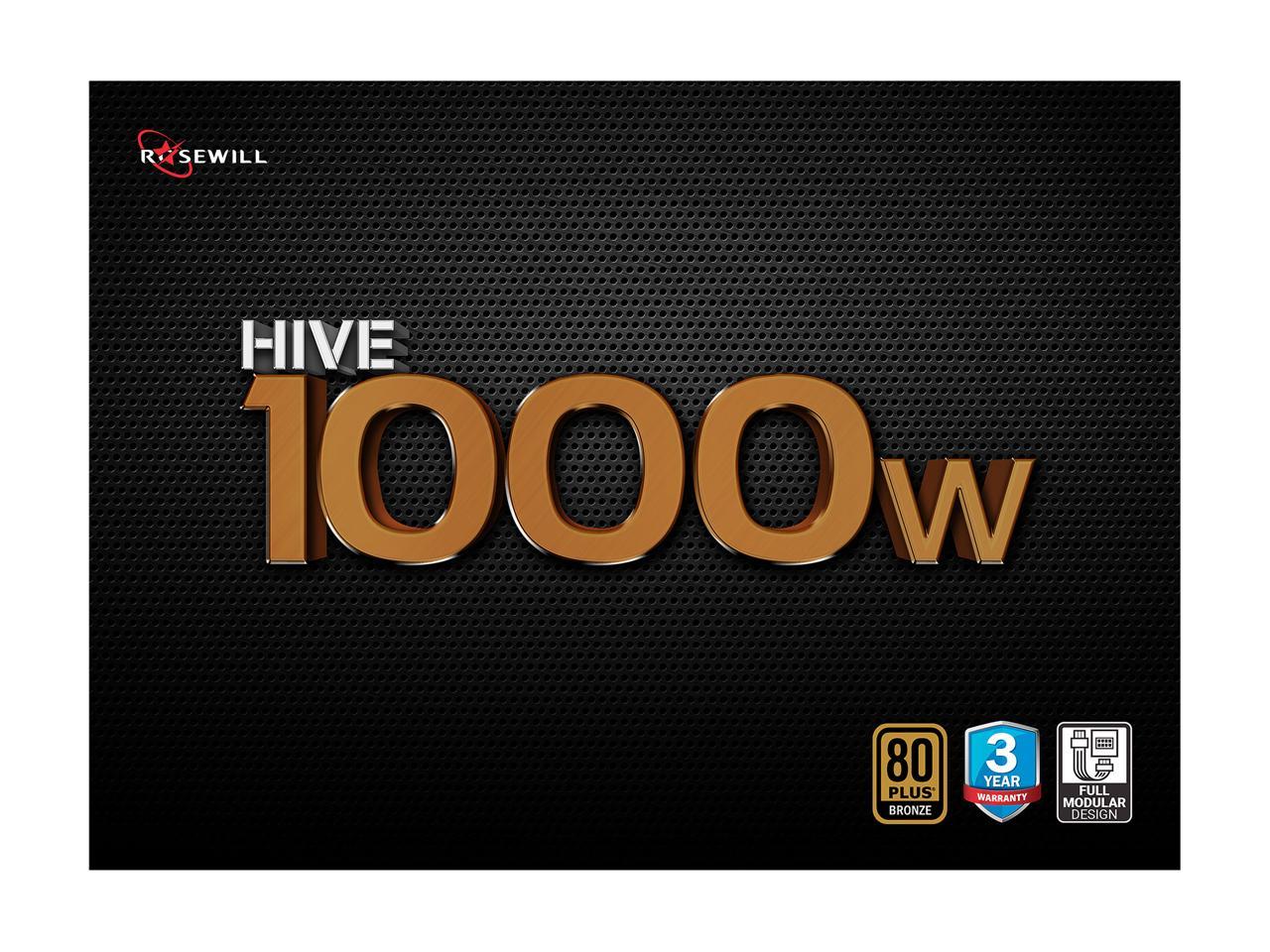 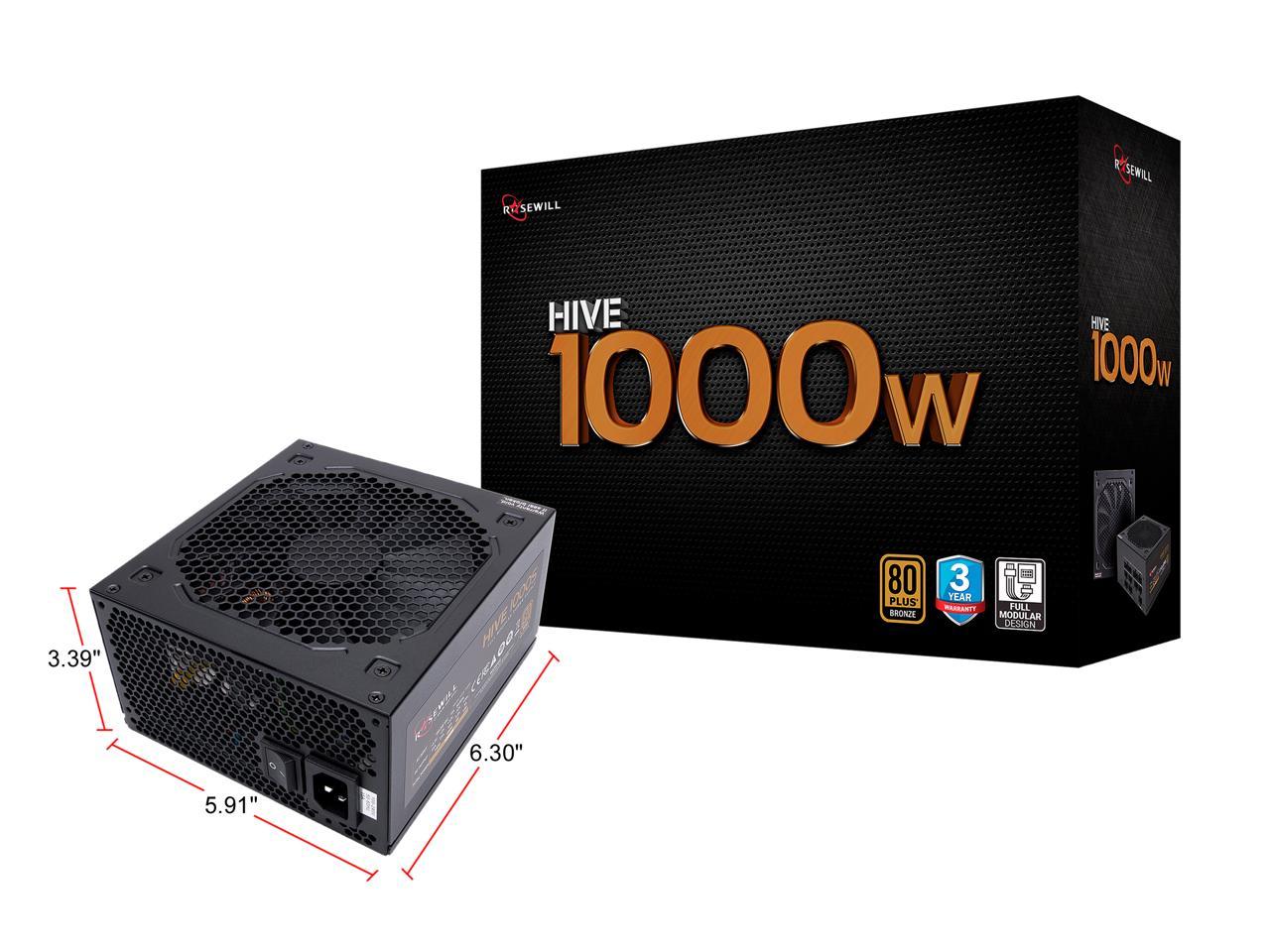 The Hive 1000 Watt power supply is 80 PLUS Bronze certified and delivers up to 85% efficient performance under typical loads. This high form of efficiency saves energy, reduces heat in your computer system, decreases fan noise and prolongs the PSU’s life span to maximize your gaming and activity. The Hive 1000 power supply boasts high quality Japanese Primary Capacitors for more reliability and protection against capacitor leaks. These electrolytic capacitors increase the life span of your equipment and are resilient in high temperature environments within the PSU. A completely modular PSU design allows every single cable to be removed from the power supply. Easily install or exclude unnecessary cables to reduce clutter and the need for cable management while maximizing airflow and cooling within your system or computer case. Learn more about the Rosewill HIVE-1000S

Cons: Nearing the end of the 34th day of having this power supply, it turned everything into a nightmare when it started shocking things.

Overall Review: It made two previously healthy hard drives shock and then smoke!! This happened at the same time, obviously I turned it off immediately and unplugged everything in fear of what else it can destroy, or the fire it could cause.. I refuse to even attempt turning it on again. I have tried connecting the hard drives to another healthy pc to see if I can salvage my important files, and they're completely toast!! The ONLY thing that's changed recently is installing this power supply.. I've NEVER had an issue prior to this. Now I've lost all the very sentimental stuff I had on my computer.. All because I decided to buy this power supply.. Don't take the chance!! Buy something else!! I saw some bad reviews and figured "there's bad reviews for everything, nothing will happen to me, there's lots of good reviews too!".. Learn from my mistake.. I wish I had never bought this!! If I could give it zero eggs, I would!!

13 out of 14 people found this review helpful. Did you?
Manufacturer Response:
Dear Valued Customer, We are really sorry to hear that and do understand your frustration; You could contact our support team with your product invoice for your warranty options. We will further check what we could do for you. Thank you for your time. Phone: 1- 800-575-9885 Email: rma@rosewill.com Email2: techsupport@rosewill.com Thanks, Rosewill Customer Care
Sheldon P.
Ownership: 1 month to 1 year
Verified Owner
Great PSU minus the whole dying after 40 days part...8/30/2018 4:39:39 AM

Pros: Great PSU for the price, fully modular is fantastic. Had no issues up until it started to melt the 8pin cords that came with it

Cons: The plastic on the 8pin cord melted and caused a short in the cord, making 3 of my gpu's non-functional (hopefully only caused by the psu and it didn't fry the cards...). Had no problem with Rosewill products in the past but this makes me understand why they sell their products for a cheaper price... cheaper parts...

7 out of 7 people found this review helpful. Did you?
Manufacturer Response:
Dear Sheldon, Thank you for your purchase and feedback. I am so sorry to hear the 3 of your gpu's non-functional. Please rest assured that the HIVE-1000S is covered by its 1-year manufacturer warranty, you could contact us to claim the warranty with your order invoice. We do care about your feedback and will continue improving our products in future. Phone: 1- 800-575-9885 Email: rma@rosewill.com Email2: techsupport@rosewill.com Thanks, Rosewill Customer Care
Anonymous
Ownership: 1 month to 1 year
Verified Owner
Hmmm3/12/2016 5:20:04 AM

Cons: The fan/ventilation/cooling creates enough noise for me to notice when the room is quiet. I am sure that Rosewill made sure the cooling was able to keep up with a fully loaded 1000W PSU -and- Shame on me, because I did not really need a 1000w PSU. This PSU cooling makes more noise than my other three ATX PSU, but they are quite a bit less than 1000w. <br>I don't always work in a quiet room, but when I do I will think "what is that noise" and it will be this PSU. Just enough noise that I knocked off an egg.

Pros: Longevity: I've had this nearly 2 years. It has been put in systems that included a fx 8350, r9 fury, r9 fury x, 6600k, and currently is being used with a r7 1700 paired with a gtx 1080 ti. EVERY one of these systems was heavily overclocked without any hiccups. 1000W: The 1000W with 83A on the 12+ rail has a LOT of headroom. Pretty much any build would work in it, unless you want quad crossfire/sli. Then, you probably wouldn't be buying a cheaper PSU anyway. Cheap (at the time): Got this when it was $70. For that price, I got a STEAL! It is nearly double now. Wouldn't pay more than $100 for it though. As the warranty leaves a lot to be desired. Warranty: Comes with a 3 year warranty. Newegg had "1-year" on the description, but I recently found the box and it says 3. So that's pretty nice.

Cons: Off brand: Rosewill is the equivalent of Newegg's "in-store brand." I've gotten parts from them that are incredible: gaming mice, fans, this PSU, etc... But I have also gotten some pure duds. Like I said, this PSU is one of the gems, imo, but there is always a risk with these off-brand products.

Overall Review: I noticed some reviews said it was loud. Personally, I disagree. It is very quiet, but I doubt I have ever pushed this thing beyond 800 Watts. So maybe when you start getting near its max load things might get loud for you. Anything under that, and I think it sounds just fine.

Pros: Nice box, good looking unit and was half modular. Had lots of extra cables with it.

Cons: Cables are wide flat ribbons that were a pain to work with. They also seem to be good for blocking air flow. And hard to cable tie properly. The Unit itself is a NO GO it would only run for a minute or two and shut down. Something is seriously borked with it. Returning for replacement or refund or a different unit.

Overall Review: The NewEgg packaging of the product was poor and has been for several of my orders. This one is no Exception. Also the cables of the unit are a total pain to work with. Second unit. Replacing first lasted 6 months and died. RMA's it and got another and it lasted a year and a half and went by by with my brand new 1070 Card. RMA's again and got another fast.. Cant say they don't warranty things but I am replacing it with a 750 gold tough power. Keeping the hive for reserve use.

3 out of 3 people found this review helpful. Did you?
Manufacturer Response:
Dear Valued Customer, We are really sorry to hear that the PSU is not working and do understand your frustration; If the item is still within its 3-year manufacturer warranty, you could contact us to claim the warranty with your order invoice; We do care about your feedback and will continue improving our products in future. Phone: 1- 800-575-9885 Email: rma@rosewill.com Email2: techsupport@rosewill.com Thanks, Rosewill Customer Care
William N.
Ownership: 1 month to 1 year
Verified Owner
Lots of power for not a lot of money.8/30/2019 3:40:15 PM

Pros: Fully modular, so no unnecessary cabling in your case. Plenty of connectors for additional accessories. Comes with a cable bag for storage of cables that are not in use. Excellent price/power ratio.

Cons: Modular cables poorly labeled, with no Rosewill branding on them. If you have other modular power supplies, it might be easy to get the cables for this unit mixed up with your other cables. The cable on the 1 x 4+4-Pin ATX12V / EPS12V Connector is a bit short for bottom mounted power supplies. It reaches, but cable management isn't as nice as I would like.

Overall Review: This PS has provided ample power with plenty of room for growth. The built-in fan runs quiet. The cable bag is a nice touch, as it will help you keep your unused Rosewill cables together. If only they branded the modular cables. I would hate to get them mixed up with cables from another power supply, and end up blowing up my gear!

Cons: - Both of the units went out in grand fashion

Overall Review: Bought two of them at the same time, operating in two different systems. They went out days apart, about 3 months after purchase. The first one went out by the system just shutting down (I was in the room), so I walked over to check it out, and it made a very loud pop sound and started smoking. The second one had a cable start melting and smoking. Luckily, I was amazingly home for each...

2 out of 2 people found this review helpful. Did you?
Manufacturer Response:
Dear Customer, I am so sorry to hear your HIVE-1000S is dead. Please rest assured that the HIVE-1000S is covered by its 3-year manufacturer warranty, you could contact us to claim the warranty with your order invoice. We would be glad to assist you with a replacement. We do care about your feedback and will continue improving our products in future. Phone: 1- 800-575-9885 Email: rma@rosewill.com Email2: techsupport@rosewill.com Thanks, Rosewill Customer Care
Abel T.
Ownership: 1 month to 1 year
Verified Owner
Great Power Source2/18/2018 9:32:12 AM

Overall Review: I don't mind the loudness, I'm using it for my home server.