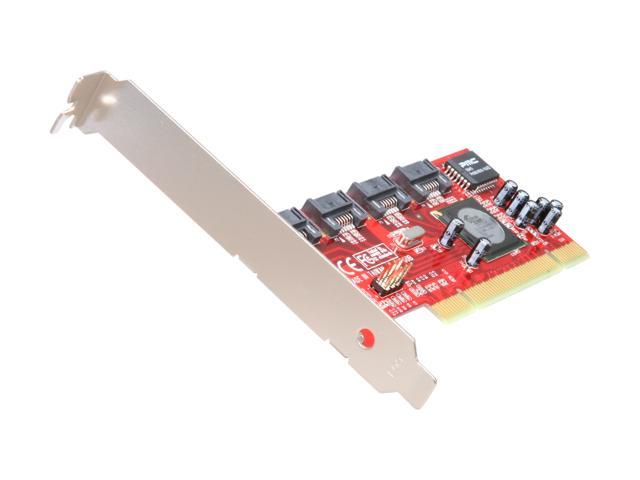 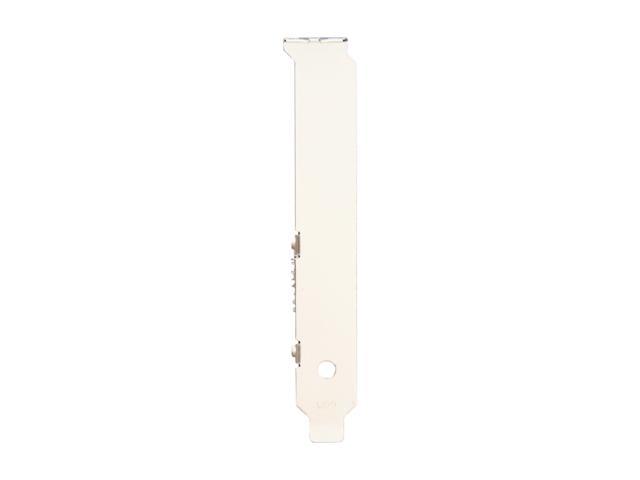 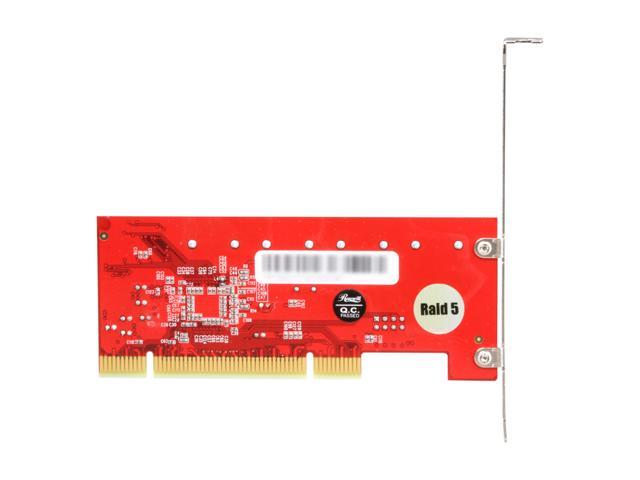 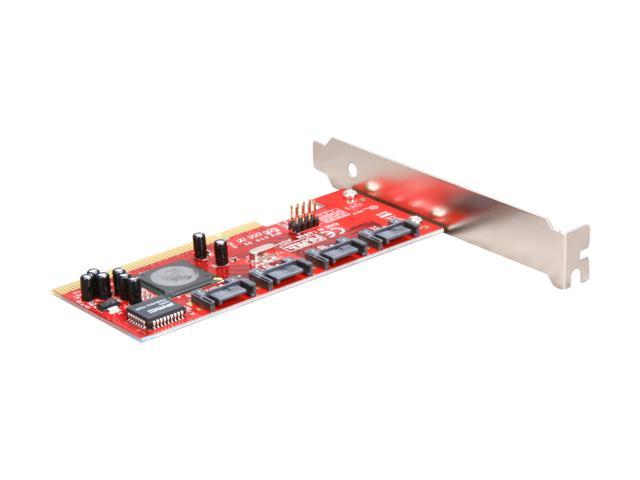 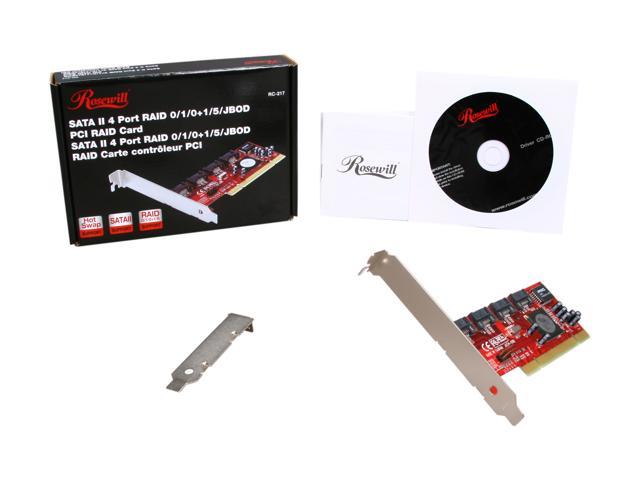 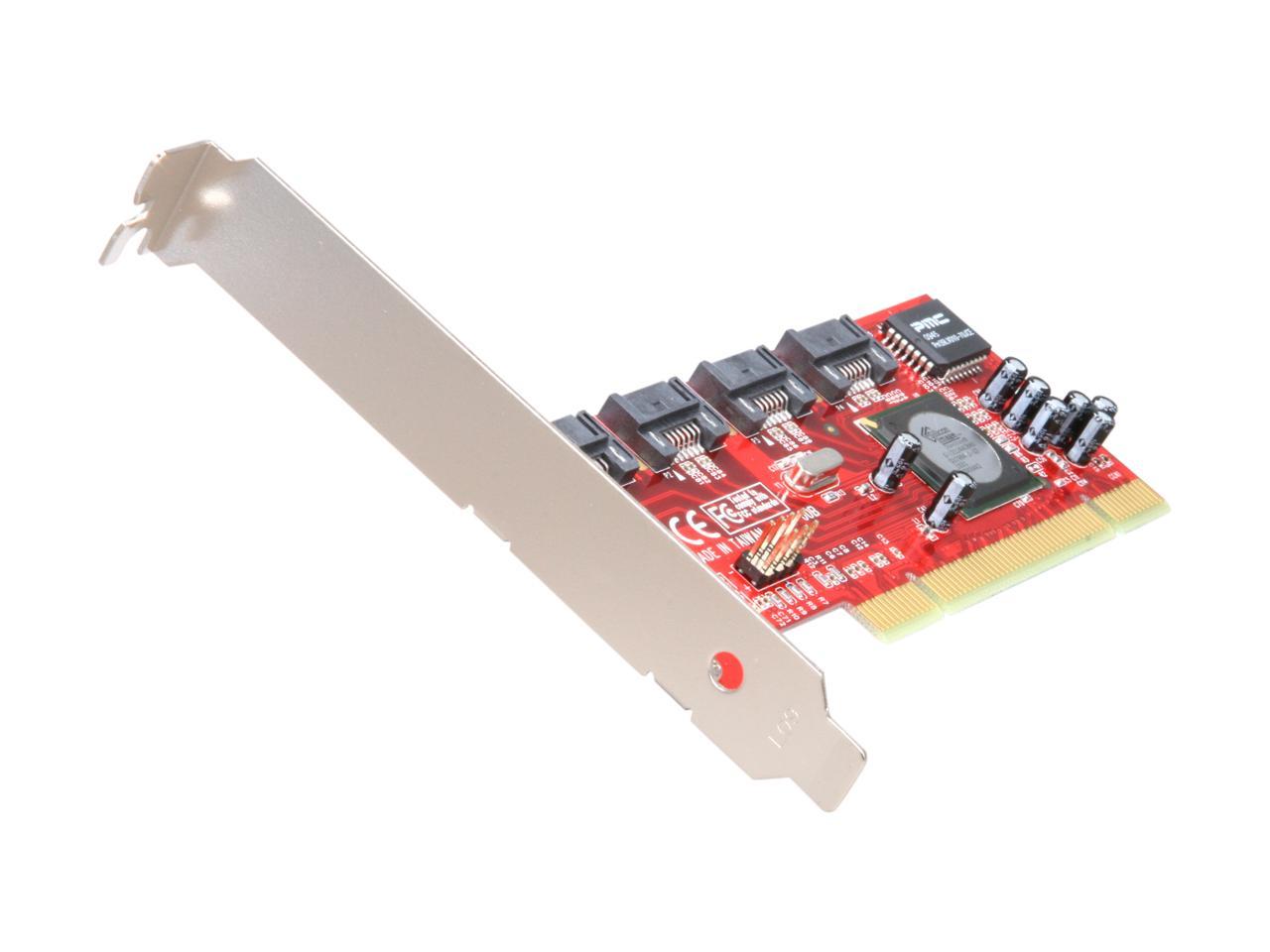 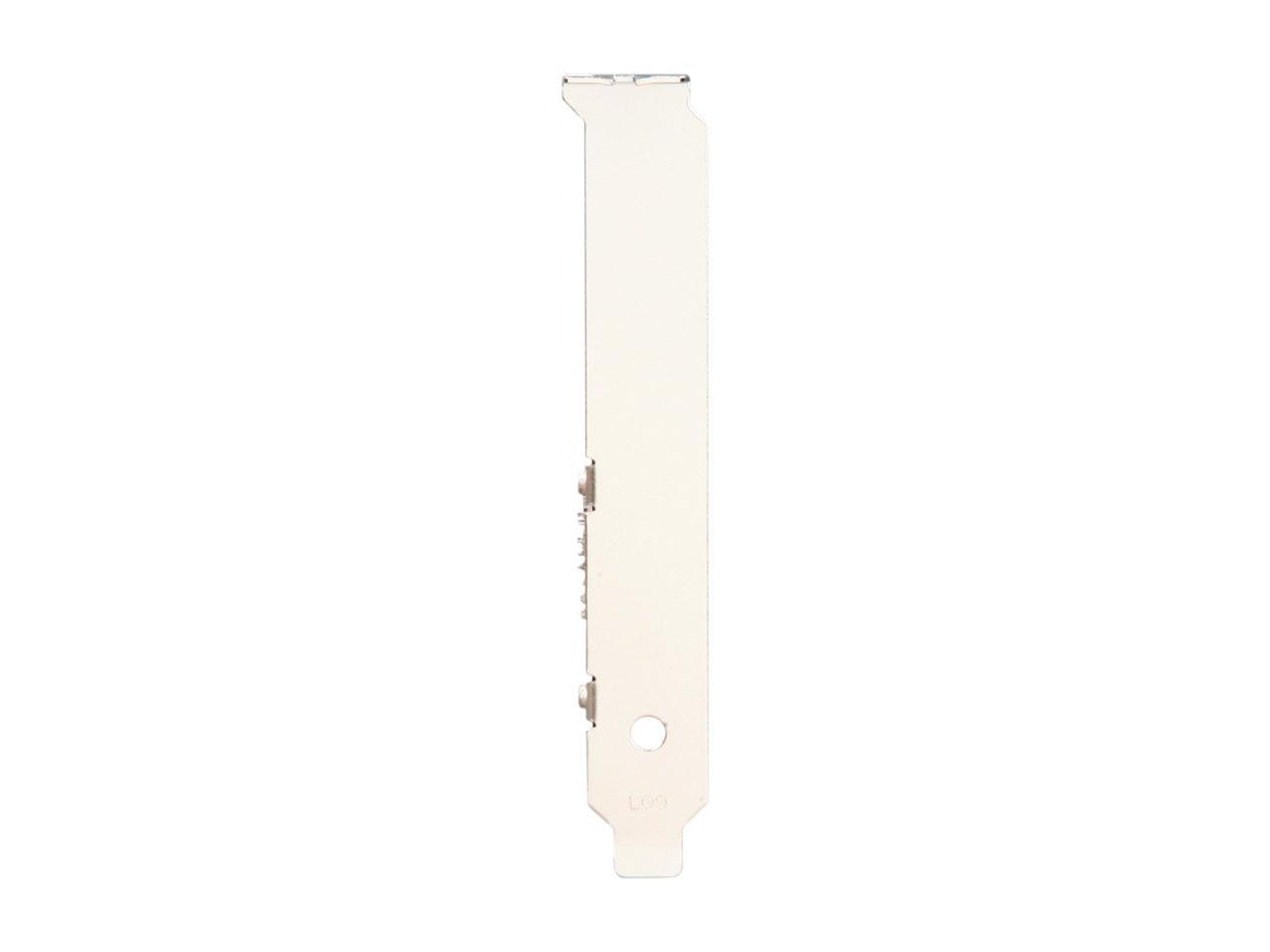 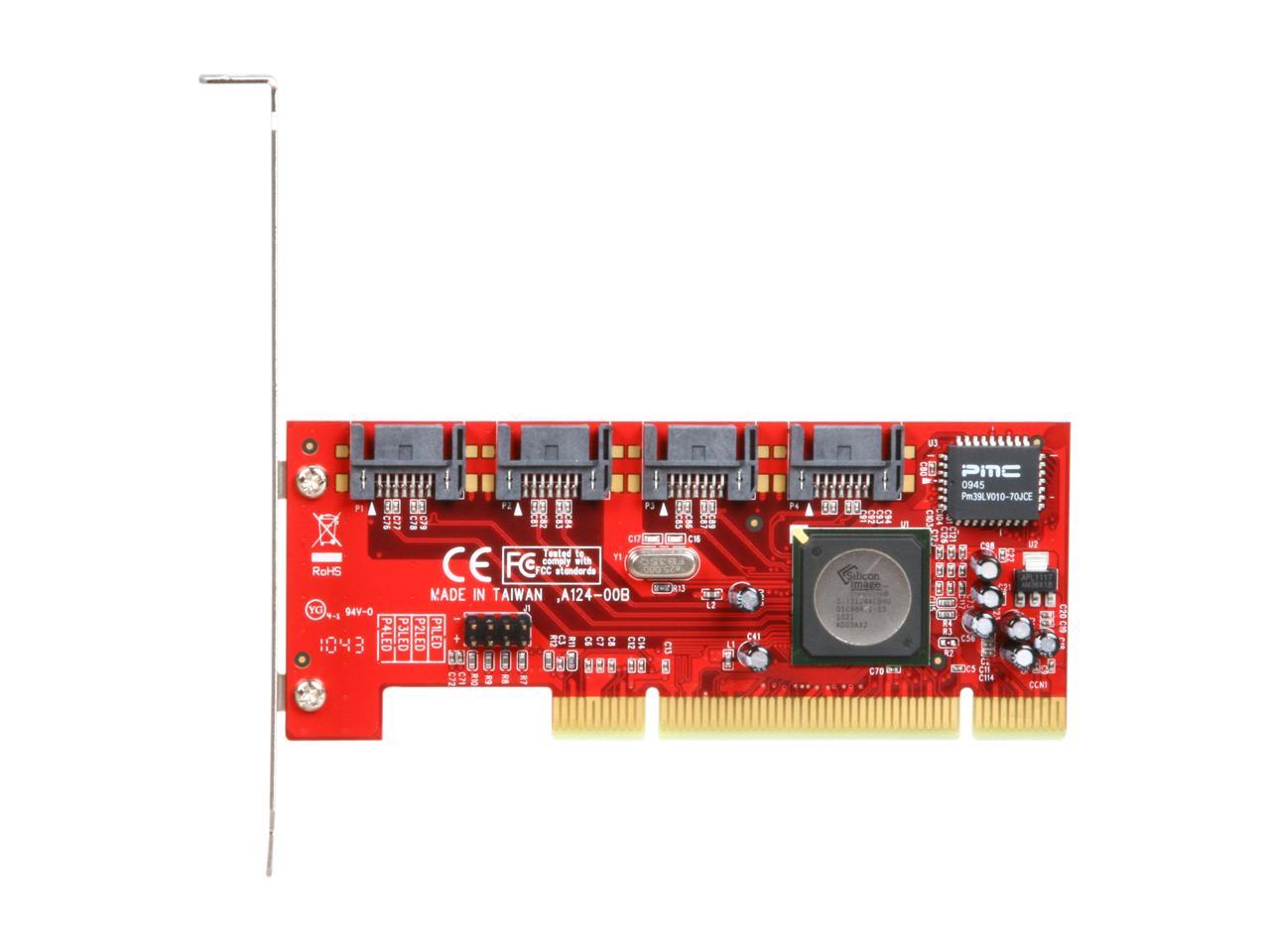 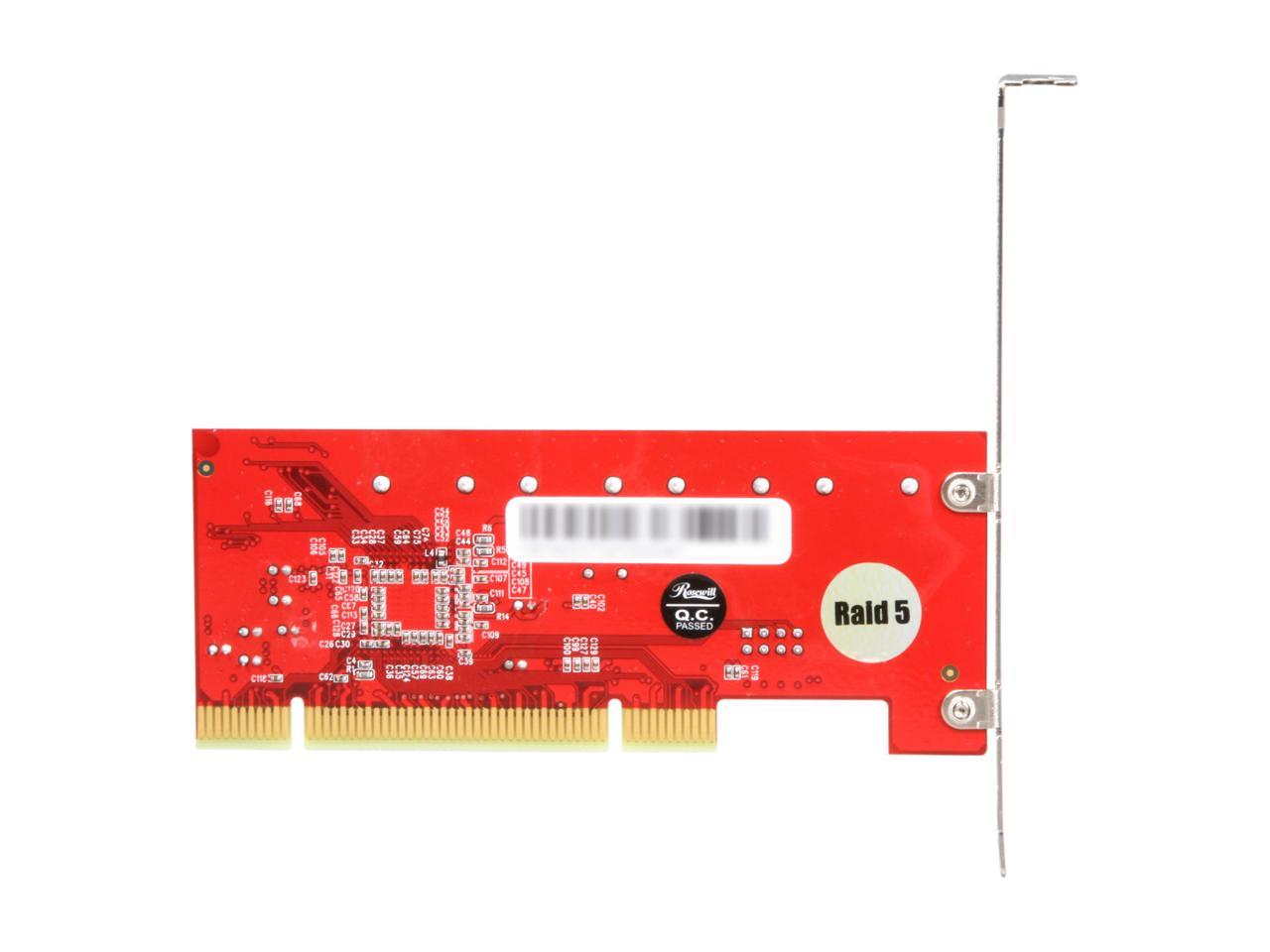 (77) Write a Review
OUT OF STOCK.
Specs
Reviews

Learn more about the Rosewill RC-217

Cons: The driver I downloaded from Rosewill's site caused my Dell GX260/XP Pro to blue screen. However, the driver on the CD works fine. Speed limited on most motherboards to SATA-1 type throughput (see Other thoughts below). Not really a con, as Rosewill doesn't claim otherwise, just something to be aware of when buying any 32-bit PCI card to hook up SATA-2 drives.

Overall Review: To the folks who have complained about slow speeds with this card: the common 32-bit PCI bus found on 99% of all desktop motherboards runs at 33Mhz, giving a total bandwidth of 133MB/S before overhead. That's just about what a single SATA-1 port runs after it's overhead. So don't plug this card into a common 32 bit/33Mhz PCI slot and SATA-2 drives and expect to see SATA-2 type throughput. The connection to the drives might be SATA-2 but the PCI bus will bottleneck you and you'll see speeds like you've got a SATA-1 drive, topping out around 130MB/S or more likely less. To get SATA-2 speeds through the whole system you have to plug this card into a 66Mhz PCI slot. These are generally only found on server motherboards in conjunction with 64-bit PCI, identifiable by a long PCI connector. The long 64-bit connector accepts a 32 bit card like this one. Also, all the cards on a 66Mhz PCI bus must be 66Mhz capable. If even one of them is a 33Mhz card, all the cards will throttle down to 33Mh

Pros: Used it to replace a nvidia onboard sata raid and works solid. No more lockups on shutdown. Boots XP just fine. Interface software works as it should. Performance good during GHOST backups. Having 4 ports on the card is reason I bought this card. Once past initial issues, this card is very stable!

Cons: Windows raid GUI application looks amateur but works good. USB drivers had to be reloaded after RAID install (weird), just had to 'update' the drivers and USB started working fine again. Doesn't like some USB devices when booting. Couldn't see the SATA drives until I put them into a RAID on the card (pass-thru didn't seem to work) Luckily, I could still use the internal SATA control until I could get everything going. MUST start from scratch on the drive formatting or it gives headaches.

Overall Review: STRONGLY RECOMMEND FULL IMAGE backup of hard drives (not just a partition backup-won't work for this). If you plan on transferring data from previous configuration, make sure you install the drivers for this card, ghost system before allowing windows to start up, switch to new controller, config raid, wipe/reformat raid, restore GHOST, let system boot, force windows to reload USB drivers,

Pros: Does what it is supposed to do with decent speeds.

Cons: BEWARE, that a lot of the new Dell servers have locked out the use of third party RAID cards such as this one. Not Rosewill's fault but most people might not realize this before turning down Dell's overpriced RAID cards.

Pros: Cheap and can hold 4 drives

Cons: From what i read in the manual after i got this, its not a true hardware RAID card but you dont have to install any software for it except the drivers unless you want whatever functionality that gives you.

Overall Review: Works great for the money, tho i do notice the write speed decrease with the RAID-5. I got 3 WD 500GBs on this in a RAID-5 and my old 300GB drive holding backups.

Pros: Two cards connected to my Tyan motherboard. One is RAID 1 and one is RAID 5.

Cons: Be warned if you want to make the raid array your primary boot disk for windows. You either have to have a floppy drive and load the correct driver onto it beforehand or add the driver to a windows boot CD which you have to make yourself from your copy of windows. It takes a while to format the array (longer than just formating the drives individually), but not more than 10% longer

Overall Review: You need to have some technical experience to install this thing as the boot drive, but for just adding raid to a system it's really easy.

Pros: Easy to set up. Included configuration software is easy to use, and has plenty of features. Rebuilding an array is easy to do. Drives are hot-swappable, and rebuilding happens in the background, so the computer (and the drives) can still be used while it is rebuilding. The rebuild uses no CPU time (though the rebuild seems a little slow)

Cons: First card I received had a bad port. The return to Newegg was easy, and I soon had a new card. The second card works fine. Rebuild time is a little slow, but that is to be expected for this type of card. A 750GB mirror took 16 hours to rebuild.

Overall Review: I am using this in an old Pentium III 550 machine as a file server/backup computer. I have 2 750GB drives in a RAID 1 mirror, and an external 750GB drive (all of them in removable trays) that I will periodically swap out for an off-site backup, and let the array rebuild itself. Other than the first one having a bad port, it seems to be a good card.

Cons: None seen so far.

Overall Review: Sil 3124 chipset...as seen in pictures on Newegg pages. Card delivered with current Sil 3124 BIOS per Silicon Image web site; no need to update BIOS on card. Having a card with update-able BIOS is nice. Used Silicon Image Windows tool to create RAID 5; no issues using this software. No issues with SATA speed negotiation; SATA-II negotiated every time with all SATA-II drives in my collection. It helps to use reasonably current hard drives as some early SATA-I drives may not like working on a SATA-II capable controller. Keep in mind...building a software-based RAID 5 will take time. In my case, CPU is Intel Atom 230 (Jetway NC-92 mobo) and the RAID array built from 4xWDC 80G Blue HDD. Took about 55-60 minutes to build under Windows and/or FC14. Would buy again.