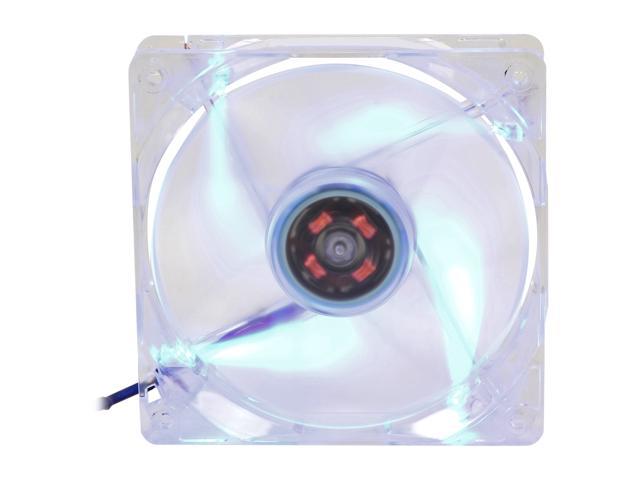 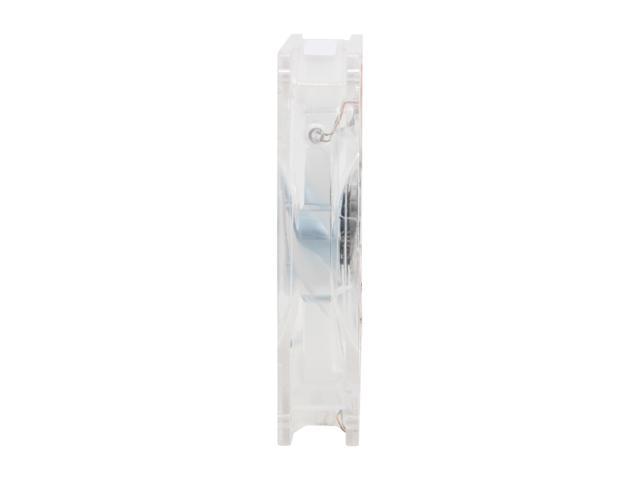 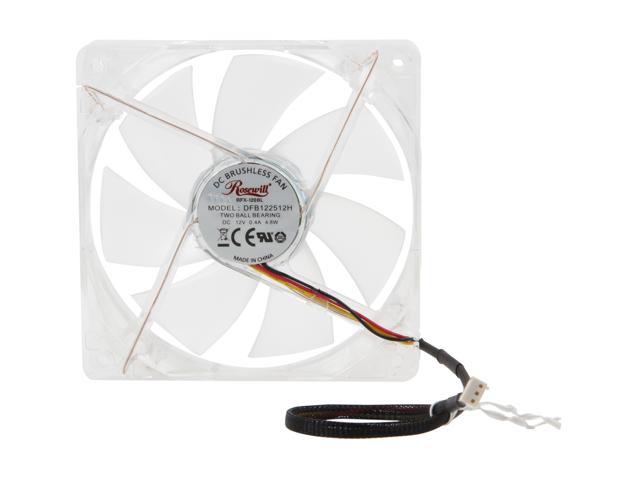 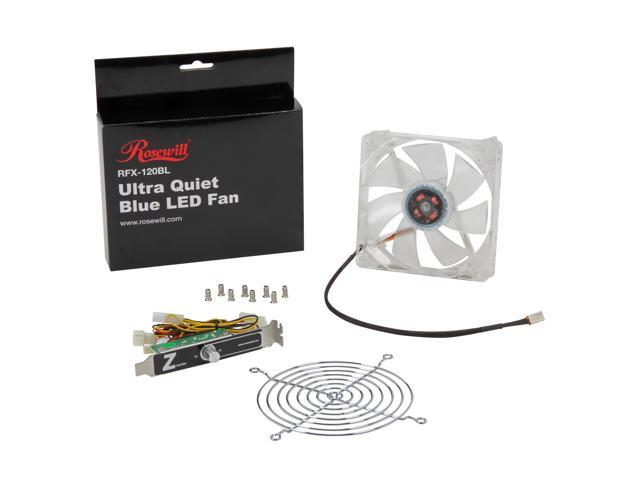 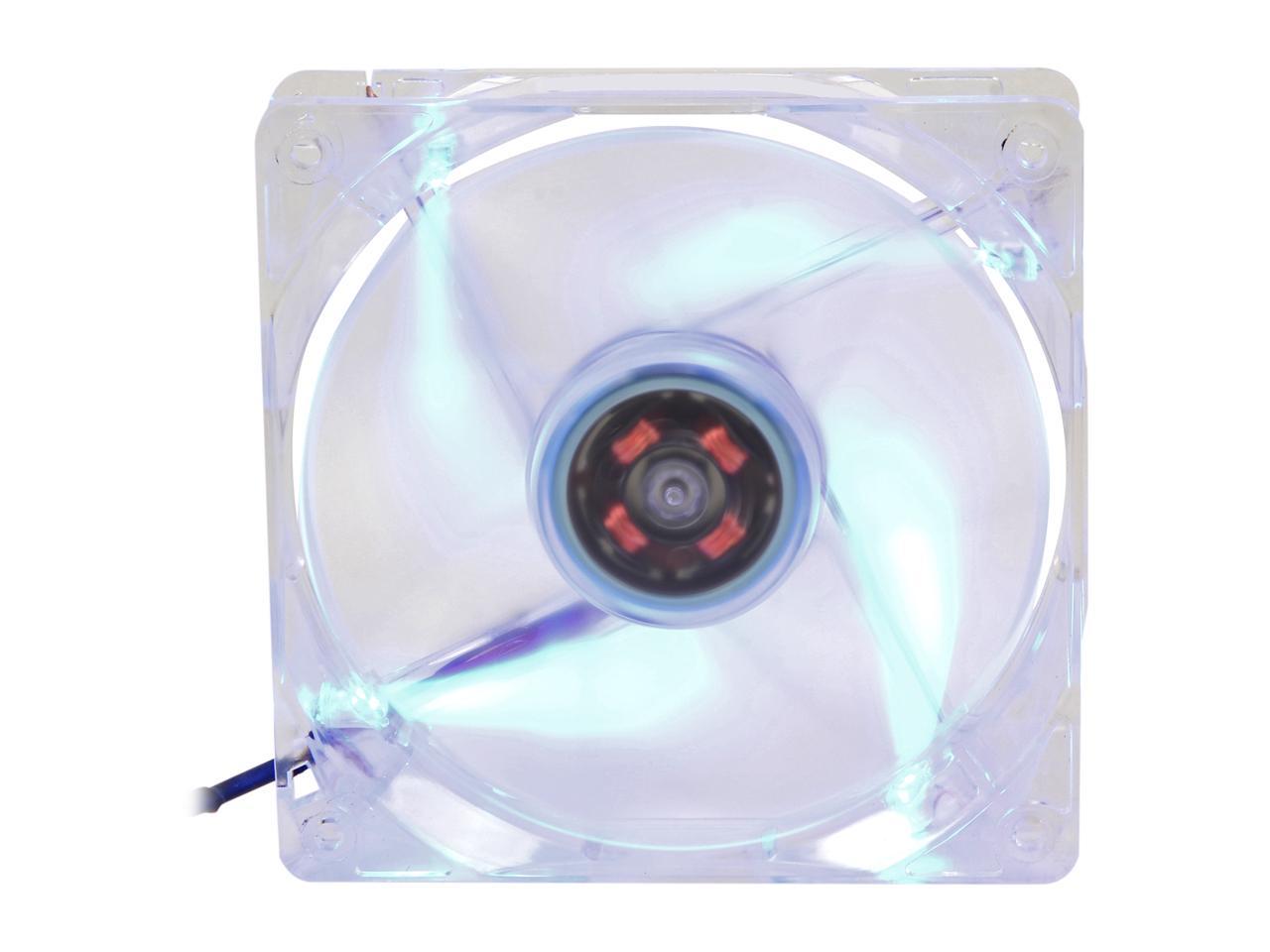 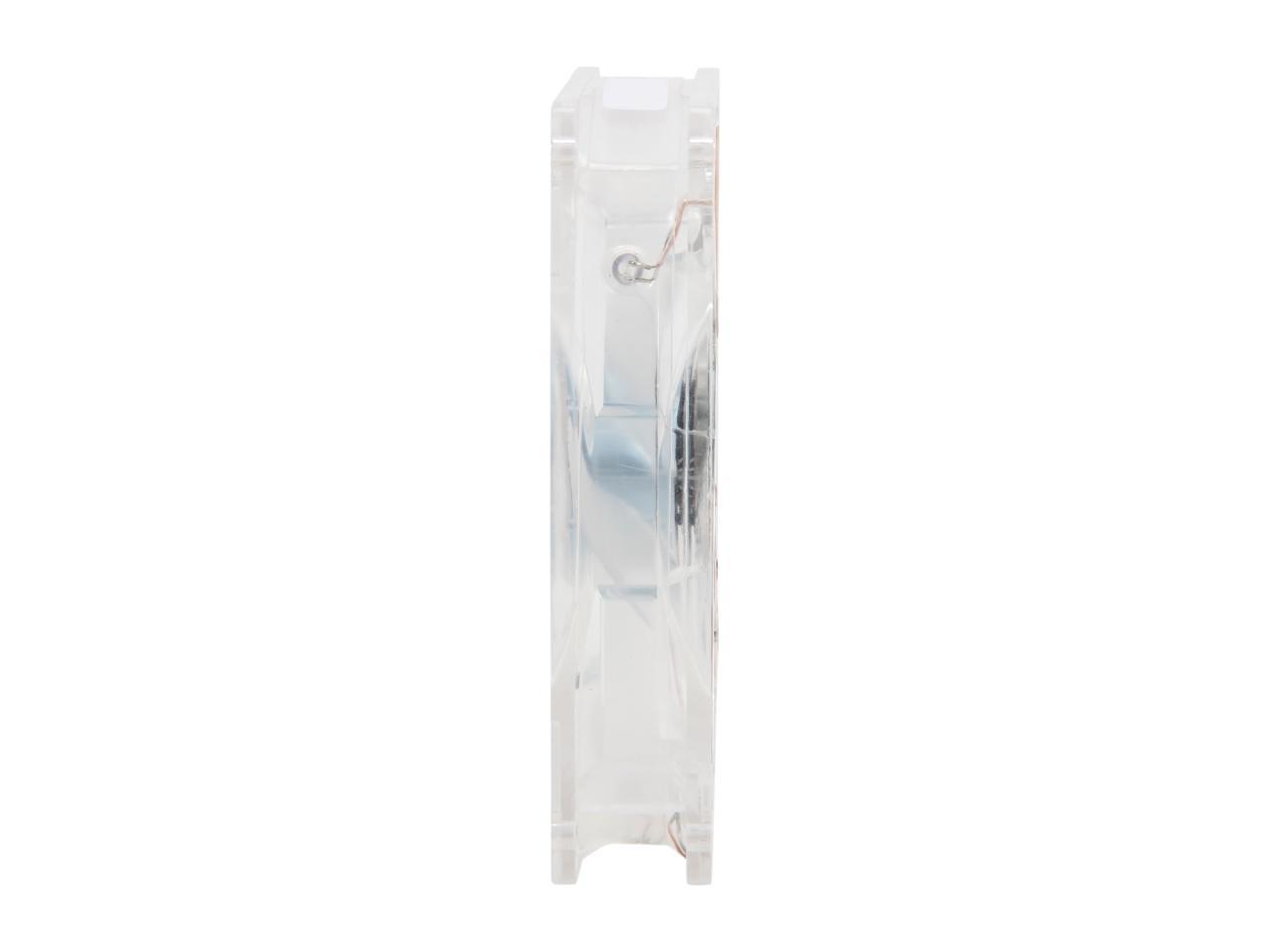 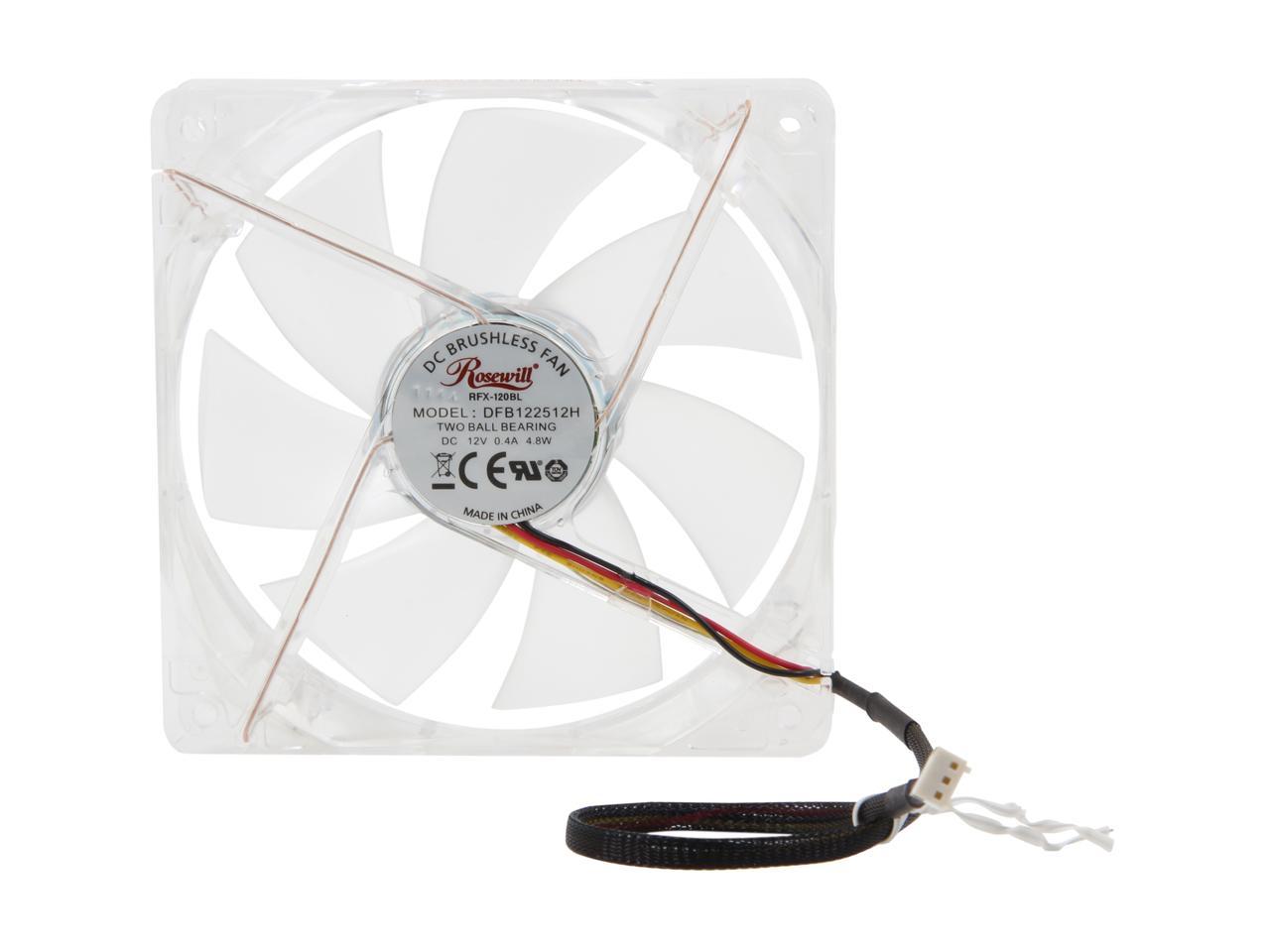 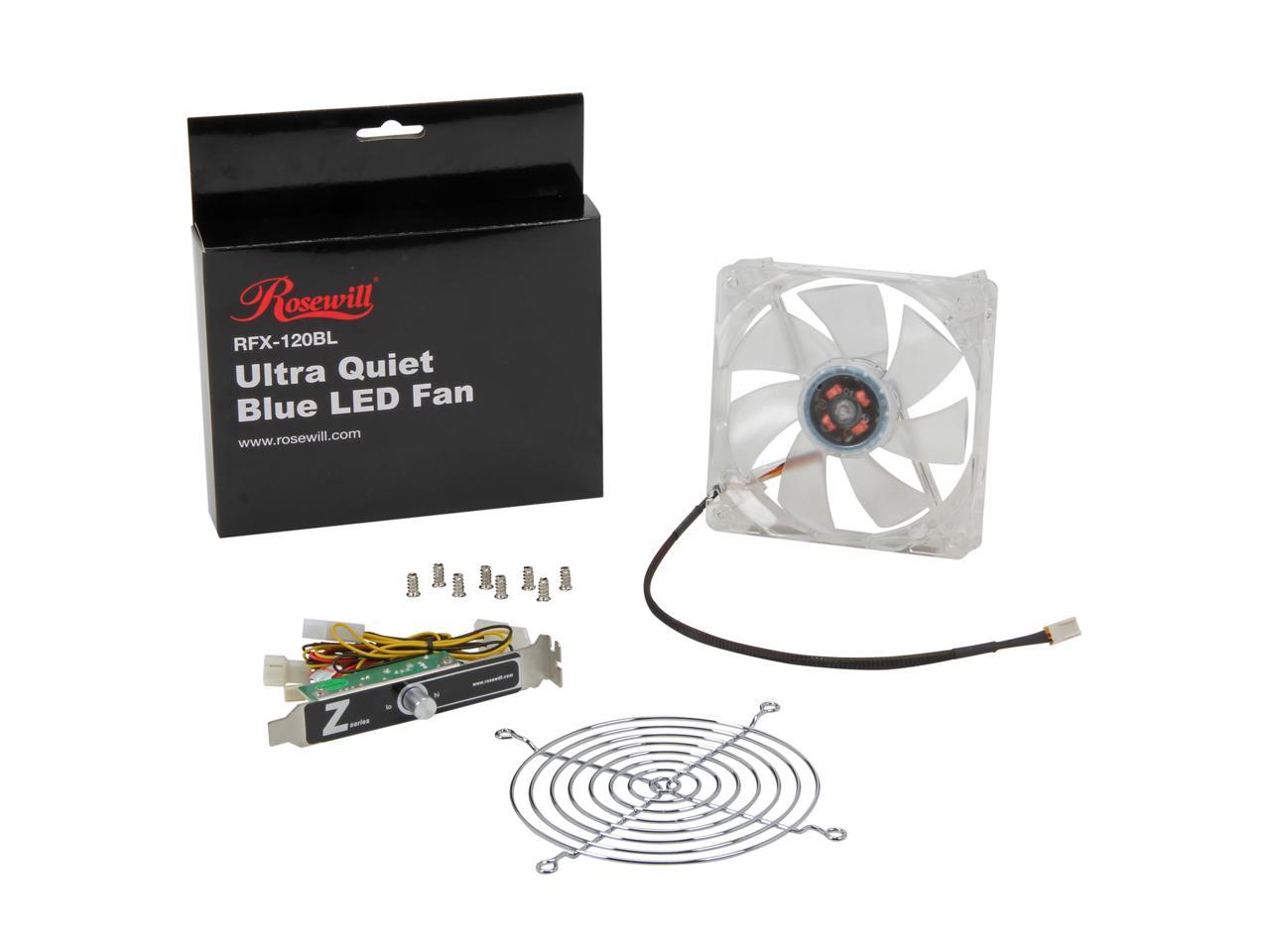 (476) Write a Review
OUT OF STOCK.
Overview
Specs
Reviews Learn more about the Rosewill RFX-120BL

Pros: Nicely packaged Moves lots of Air Bright Blue LEDs (If you're into that kinda thing) Can be powered by PWM motherboard or Molex power

Cons: O M G, this thing is LOUD!!! It's not so much the decibels but the whining sound it makes on full The only way I can tolerate it is to connect the manual expansion slot based speed adjuster and dial it all the way down as slow as it will go.

Overall Review: This is used as a front intake fan in a micro ATX case mounted on a wall at chest level. This houses my i3 based Unix router along side a 24 port switch, DSL modem and Wireless AC access point. I am in a room with 2 other rack servers and my workstation and this fan can be heard above all of that on high. If you are looking for SILENT, look elsewhere

Pros: - Price - Rosewill Brand - Variable Speed - Good Build Quality They have plenty of wire length to mount just about anywhere and look good in the case. I have actually used many other Rosewill fans in other builds, and they have never given me any problems.

Overall Review: I purchased two of these to replace the two fans on my Thermaltake Frio that were showing signs of wear and making noises that were indicating there impending failure. I ran the two original fans at 2000 RPM in a push/pull configuration to maintain the temperatures I wanted on my overclocked Phenom II X6 1090T @ 3.8GHz. With both of these fans running at 2000 RPM, they are doing the same job keeping the Frio and my CPU cool and they are doing it as quietly at the last set. So I am very pleased. Great fans for the price. Would recommend to anyone.

Pros: this fan is great for keeping my distroyer case cool along with 6 other of his friends that are all blue led fans also

Pros: I love the fan speed controller, since I did not have one already. Too bad it mounts in the back (front mount would be more convenient). To avoid confusion...others reviewers have said that it takes up a PCI slot. Yes and no: it does NOT plug into the motherboard at all (look at the picture) but rather takes up one of the external PCI slot panels. If you have a cramped computer, it might get in the way, but honestly probably not. In any case, it's not needed to run the fan. Without it, the fan will simply run at max rpm. At 1100 rpm, it is quieter than my 120 mm, 1100 rpm stock sleeve-bearing case fan. At 1900 rpm, it was noticeably loader, but really not bad at all. I don't hear the "high pitched whining" that others are complaining about. My video card fan makes more noise than this fan. I keep it around 1500 rpm for normal use. Comes with a bonus grill. Good if you want to mount it on the bottom or side of your case to avoid wires falling into it.

Cons: Specs say 1200 rpm to 2200 rpm. With the included controller, the fan was running more like 1100 rpm to 1900 rpm. Not a big deal. I question the accuracy of some fan speed sensors anyway. As many others have pointed out, the blue color in the picture is not what you get. It's definitely more of an cyan or aqua color. I love the actual color, but the picture is extremely misleading. The screws are kind of hard to get in (not pre-threaded), and can strip if you're not careful. But I managed to get everything fastened in tight, even with my wimpy girl hands. No documentation included. Not really needed, but I see how that could deter complete novices (beginners: if you mount it in the back, point it so air blows OUT).

Overall Review: In case anyone is a dummy like myself: both the 3-pin and 4-pin connectors need to be plugged in for the fan controller to work. I had just assumed the 4-pin was there for conversion if you had no extra 3-pins. Nope, you need to plug that in too. The brightness of the LED changes with the speed (more rpm = brighter fan). This might annoy some people, or you might love it. Bottom line: great (AQUA COLORED LED) fan, good price, bonus controller.

Pros: This fan is very very bright (hard to say if thats a pro or not) and it moves a ton of air at a relatively low noise level. I cannot hear it over my other fans in my case even at full blast. The included fan controller is great too! I used this to replace the fan on my CPU Cooler, and it looks and performs fantastically! Overall, I highly recommend it.

Cons: The only con would be the super bright LED's, but thats not a con since you'd only buy this because you want them that way.

Overall Review: A nice cool feature is the LEDs brightness corresponds with the fan's RPMs. The higher the RPM the brighter the LEDs.

Pros: Used this fan as a front intake to my new case. Saw a 6c drop in ambient temp at approx. 80% speed. Not much change in temps above that. It also blows directly across my lower video card and it runs 10c cooler. Simple installation. Noise level is tolerable at max speed but is loud. At 50% it is very quiet.

Cons: No way I can see to use the fan without the controller. Not a problem for me but for some it may be.

Overall Review: The glow does dim as your slow down the fan. It does enhance my case nicely. Expected the way it is wired. There is a good length of wiring to reach anywhere. I do wish they were in a sleeve though. Well done again Newegg. 2 day delivery for FREE!!

Pros: This fan definitely delivers the rated airflow without an excess amount of noise. Add a set of rubber/silicon fan isolators to reduce the drone to acceptable levels even at full blast. the fan controller gives more than adequate control of RPM's and noise which is nice given the price point.

Cons: The fan controller takes up a PCI slot, so keep that in mind if you are short on expansion slots. Thishas blue LEDs in a clear fan, but the LED color is actually slightly green tinted, to an aqua or cerulean color especially when compared with the colors of the LEDs in the other fans they offer, specifically the 80mm fans which i have installed in the same case as this fan. there is a difference in the color and it is quite noticable

Overall Review: besides the slightly off color of the LEDs this is an excellent purchase, especially including the integrated fan controller.

Pros: Good fan for the money plus leds. queit.

Cons: well my other fan controller literally burned, but i think it's because it was defective. The one now seems to be in working order. Also on high it makes a whine.

Overall Review: take it easy on the fan levels and it wont be so loud.